Rugged and remote, the Mackenzie Mountains are a massive chain of peaks that covers much of the border region between the Northwest Territories and the Yukon, as well as a small section of British Columbia in Canada. The range contains 353 named mountains, the highest and most prominent of which is Keele Peak (2,917m/9,570ft). 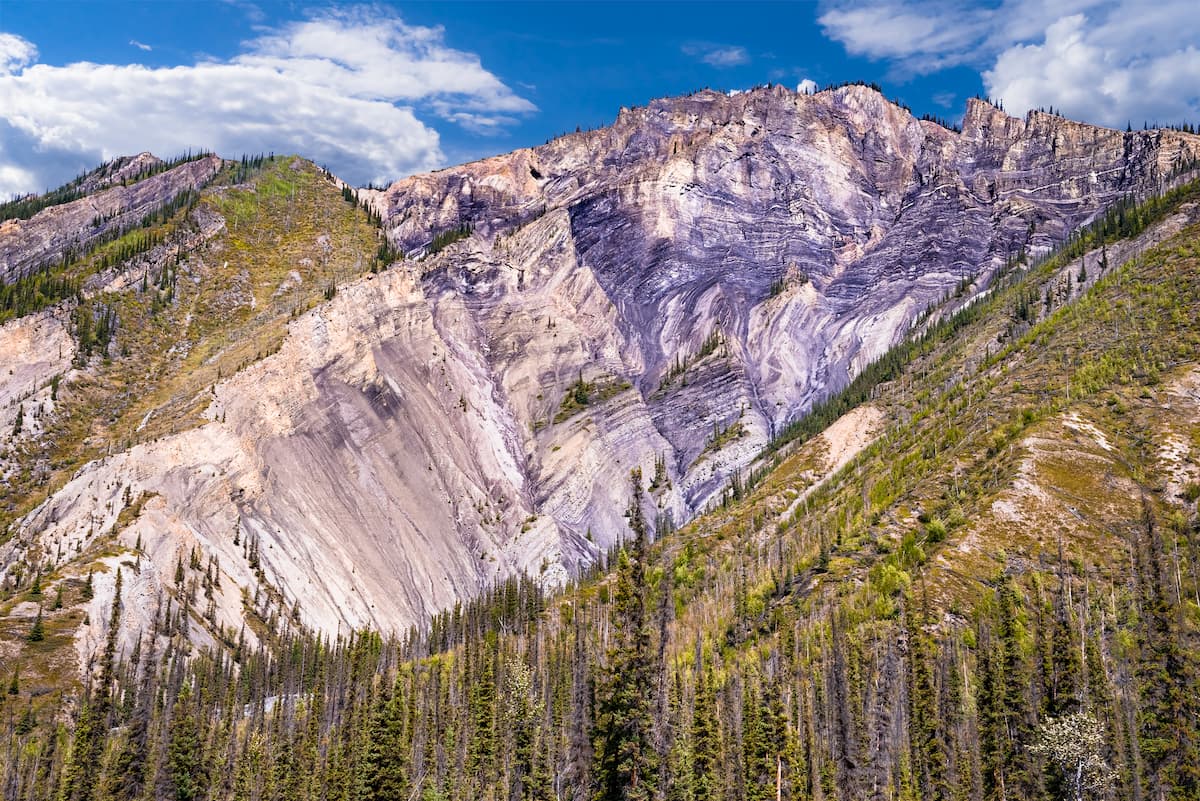 Extending from the northern border of British Columbia for about 800km (500mi) along the border between the Yukon and the Northwest Territories, the Mackenzie Mountains are a remote, yet stunning mountain range in northern Canada.

The range serves as the main watershed for many of northern Canada’s largest rivers, including the Mackenzie River to the east and the Yukon River to the west. Moreover, it is situated just to the west of some of the largest lakes in North America - the Great Bear Lake, which is the biggest lake wholly contained within Canada, and the Great Slave Lake, the deepest lake in North America.

Moreover, the Mackenzie Mountains can be considered to be a continuation of the northeastern branch of the Rocky Mountains and it is surrounded by other ranges to the west and to the south.

In particular, the Mackenzie Mountains are located to the north of the Far Northern Rockies of the Canadian Rockies, as well as to the north of the British Columbia Interior. They are also situated to the east of the Yukon Intermountain Ranges, which is a collection of loosely-related peaks that stretches across the Yukon and into the US state of Alaska.

To the east of the range, however, the land becomes much less mountainous, particularly in the area between the Mackenzie Range and both Great Bear and Great Slave Lakes and on the other side of the lakes into southern Nunavut.

Due to the remoteness of the Mackenzie Mountains, there are few roads that lead into the mountains. In fact, most public roads in both the Yukon and the Northwest Territories stay to the east or the west of the range, with the exception of the Nahanni Range Road (Yukon Highway 10) and the Canol Road (Yukon Highway 6).

The Mackenzie Mountains are generally considered to be an extension of the Rocky Mountains, which also includes the Far Northern Rockies and the Canadian Rockies to the south.

Within the Mackenzie Mountains, there are a number of subranges, which are recognized as distinct subranges to various degrees by people local to the area. Some of these subranges include the Logan Mountains, the Selwyn Mountains, and the Franklin Mountains.

Geologically, the Mackenzie Mountains are mostly comprised of sedimentary strata, though there are also some large Cretaceous intrusions, particularly in the southern and central parts of the range. Some parts of the region date back as far as the Proterozoic and the range, as a whole, exhibits widespread folding.

The Mackenzie Mountains happen to contain some substantial deposits of minerals, especially tungsten. Other minerals found throughout the range and in the Northwest Territories as a whole include cadmium, nickel, silver, gold, copper, and even diamonds, though tungsten is by far the most abundant.

Almost all of the Mackenzie Mountains is located to the south of northern Canada’s treeline.

As a result, much of the region is heavily forested at the lower elevations; however, the alpine timberline is also fairly low throughout the range, so the highest slopes are either alpine zones of bear rock.

A substantial portion of the range’s lower elevations is taiga (boreal forest), with dominant species including both white spruce and black spruce.

Within the Mackenzie Mountains, wildlife is abundant as the region is excellent habitat for large mammals, such as caribou, moose, Dall sheep, mountain goats, and grizzly bears. That being said, while polar bears can be found in the Northwest Territories, they generally stick to coastal areas in the far northern parts of the territory.

The land in and around the Mackenzie Mountains has long been home to humans. Indeed, the region has a rich cultural heritage that dates back to time immemorial.

Much of the area in and around the range is part of the traditional territory of the Dene Nation, the Northwest Territory Métis Nation, the Dehcho First Nations (including the Łı́ı́dlı̨ı̨ Kų́ę́ First Nation), and the Gwich'in Tribal Council, among others.

Some of the first people of European descent to visit the area were fur traders who ventured into the Mackenzie Mountains around the 18th century. European visitation of the range increased drastically after Alexander Mackenzie paddled the Deh-Cho (Mackenzie River) to the Arctic Ocean and after he made an overland crossing of what is now Canada.

Not long after Mackenzie’s exploits, European settlers established fur trading posts at both Fort Laird and Fort Simpson. During the 19th and 20th centuries, prospectors started arriving in the region, establishing a mining industry that continues to this day.

Nahanni National Park Reserve was one of the first federally-designated areas of land in the region. It was established in 1972 and it has since grown substantially in size. Since its establishment, the park has also been designated as a UNESCO World Heritage Site.

Meanwhile, Nááts'ihch'oh National Park Reserve is substantially younger than its southern neighbor, having been established in 2014.

These days, although much of the Mackenzie Mountains are remote and difficult to access, the region remains an important part of the cultural heritage of the many people who call it home. The range also offers plenty of hiking, canoeing, and outdoor recreation opportunities for those willing to venture off of the well-worn path.

For the most part, the Mackenzie Mountains are a remote and difficult-to-access range. However, there are 2 large park reserves within the range as well as an abundance of hiking opportunities for those willing to head out into rugged terrain.

Encompassing a vast part of the southern Mackenzie Mountains, the Nahanni National Park Reserve of Canada is home to some stunning canyons and some beautiful mountain scenery. The park contains 92 named peaks, the highest and most prominent of which is Mount Nirvana.

Nahanni National Park Reserve includes about 30,050 sq. km (11,600 sq. mi) of land to the west of Yellowknife, including much of the region around the Tehjeh Deé (South Nahanni River). The park also contains Náįlįcho (Virginia Falls), which is a massive waterfall that boasts a 96m (315ft) drop - about 2 times the size of Niagara Falls in Ontario and New York.

Technically speaking, there are no formal hiking trails within Nahanni National Park Reserve, though there are some fairly popular hiking areas with informal paths that are surprisingly well-worn. Some of the more popular destinations include Glacier Lake, Sunblood Mountain, Dry Canyon Creek, Prairie Creek, Secret Lakes, and Lafferty Creek.

Like its neighbor to the south, the Nááts'ihch'oh National Park Reserve is situated around the South Nahanni River watershed and it is well-known for its excellent collection of flora and fauna.

Currently, the park has no officially designated trails, though there are plenty of hiking opportunities for the more intrepid among us. Many people who visit the park fly in to Otaa Tué Fehto (Divide Lake), Dechįbaa Tué (Margaret Lake), or Níonep’eneʔ Tué (Backbone Lake/Grizzly Bear Lake) from nearby Tulita.

Planning a trip to the Mackenzie Mountains requires quite a bit of pre-planning for those coming from outside the Yukon or the Northwest Territories. So, here are some of the best places to stay in the area:

The Northwest Territories’ only city, Yellowknife is the capital city and largest community in the territory. Approximately 20,000 people live in Yellowknife, which is located on the northern shore of Great Slave Lake, a substantial distance to the east of the Mackenzie Mountains.

Although the Mackenzie Mountains are quite far from Yellowknife, the city is the easiest place to fly into if you’re coming from further afield. Yellowknife is home to the largest airport in northern Canada and it is connected to the rest of Canada via the Yellowknife Highway, which stretches from the city to the Mackenzie Highway just north of Alberta.

Located in the northern part of the mainland portion of the Northwest Territories, Inuvik is the administrative center for the Inuvik Region. It is home to about 3,000 residents and is situated just at the northern edge of the Mackenzie Mountains.

Inuvik is connected to the Canadian highway system via the Dempster Highway, which connects it to the Klondike Highway in the Yukon. Moreover, Inuvik has an airport that offers service to Whitehorse, Yellowknife, Edmonton, and many of the towns in both the Yukon and the Northwest Territories.

The only village in the Northwest Territories’ Dehcho Region, Fort Simpson is actually technically located on an island at the confluence of the Liard and Mackenzie Rivers to the east of the Mackenzie Mountains.

About 1,000 people live in Fort Simpson, which is a major cultural hub for the region. Fort Simpson is located along the Mackenzie Highway and it has a small airport with connections to Yellowknife. It is also one of the main starting points for trips into Nahanni National Park Reserve.

Situated to the west of the Mackenzie Mountains, the town of Watson Lake, Canada is located at mile marker 635 on the Alaska Highway, just along the border of British Columbia and the Yukon.

Watson Lake is home to about 800 residents and it is fairly easy to get to by road on the Alaska Highway or on the Cassiar, which intersects with the Alaska Highway just south of the town. Many visitors to the Mackenzie Mountains start their journey from Watson Lake, taking Yukon Highway 4 (Campbell Highway) to Yukon Highway 6 (Canol Road) for as far as they can before continuing on foot. 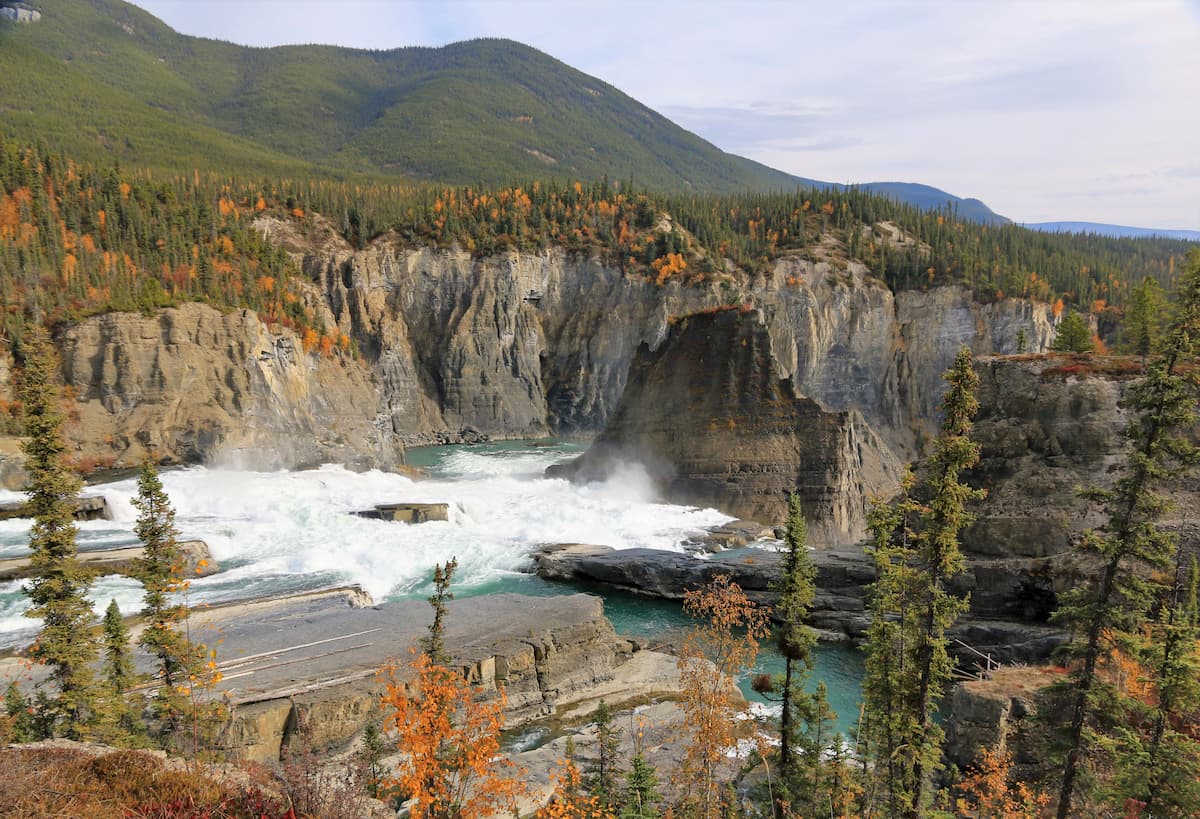 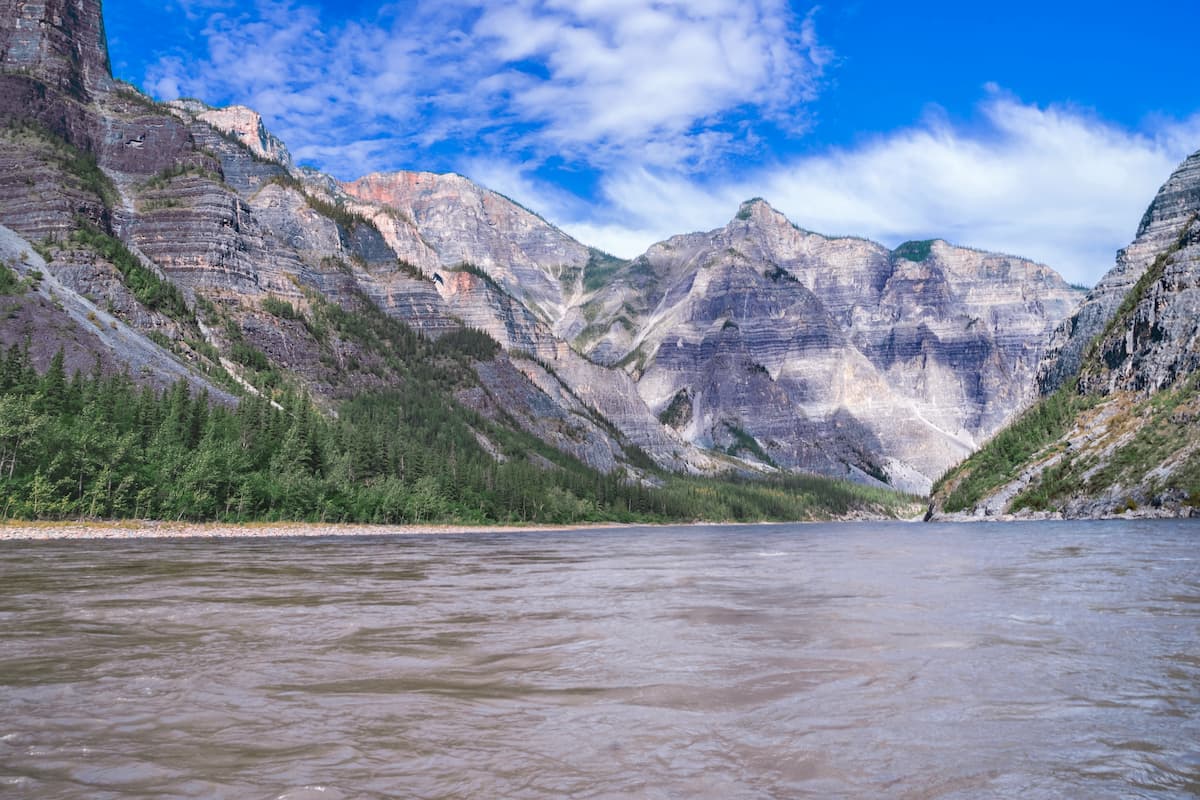 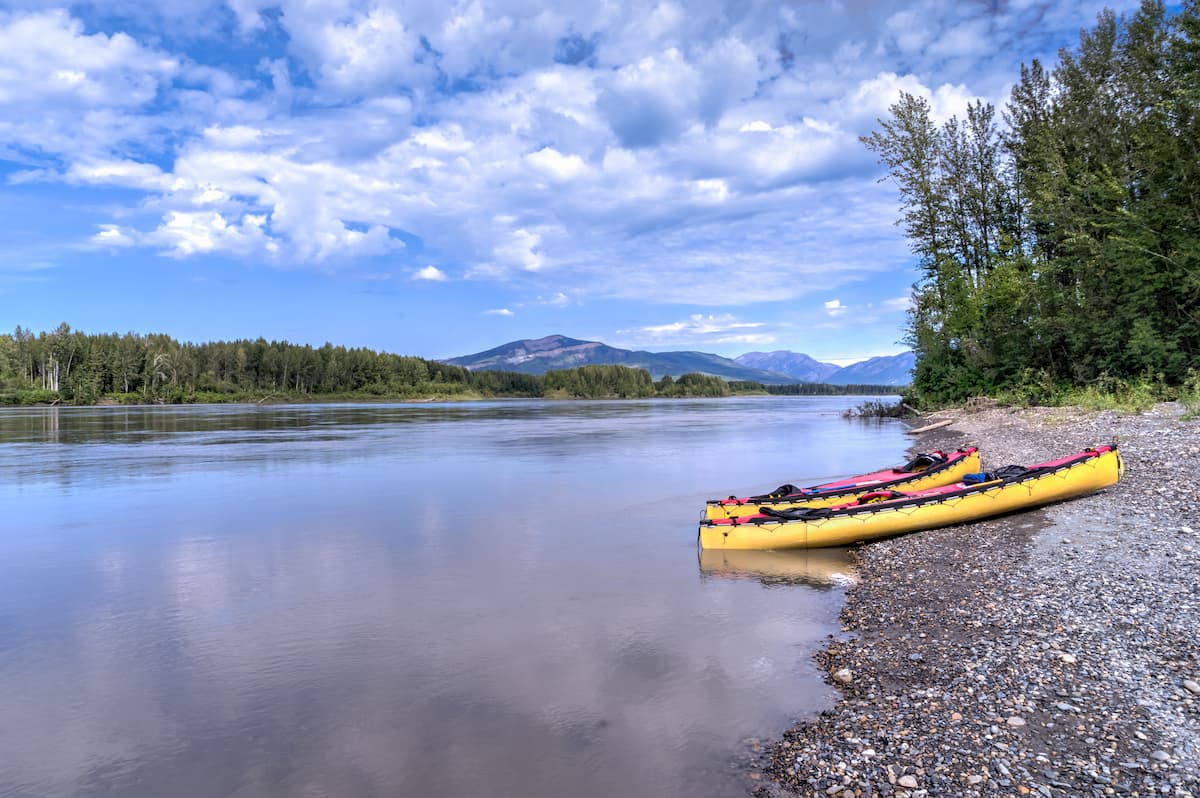 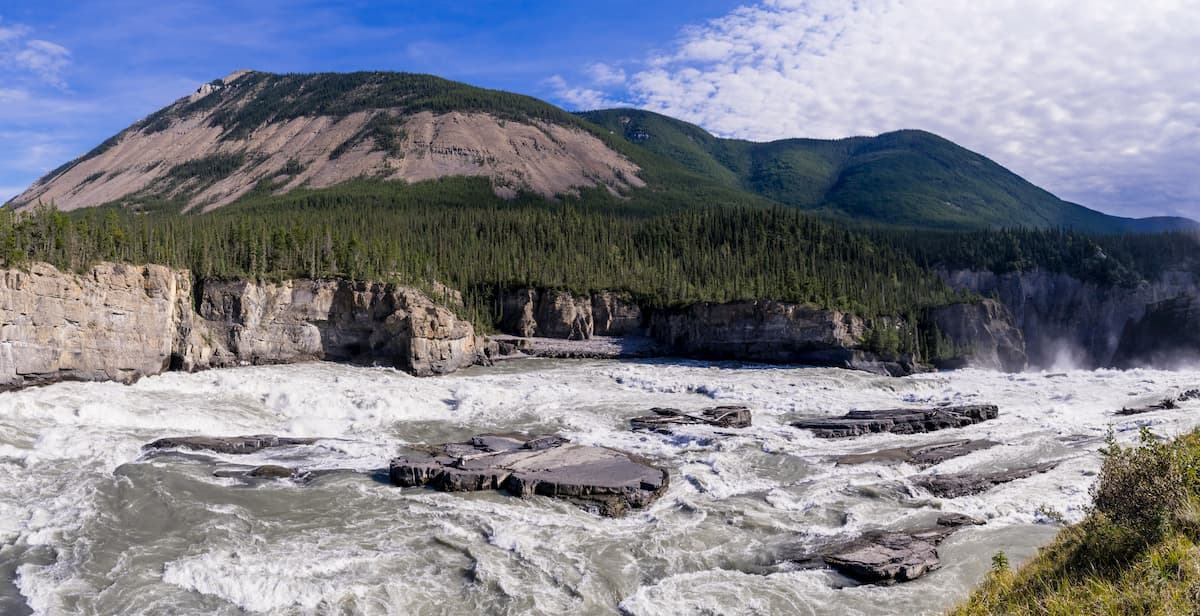 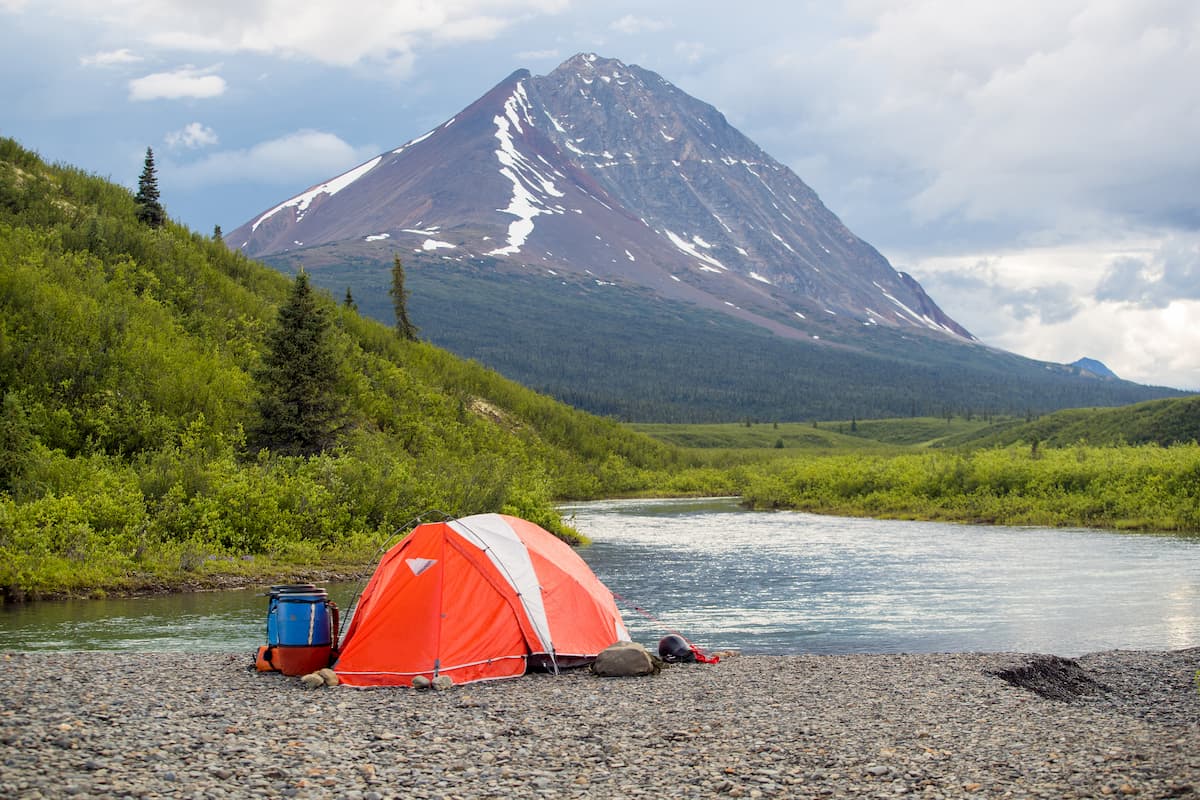 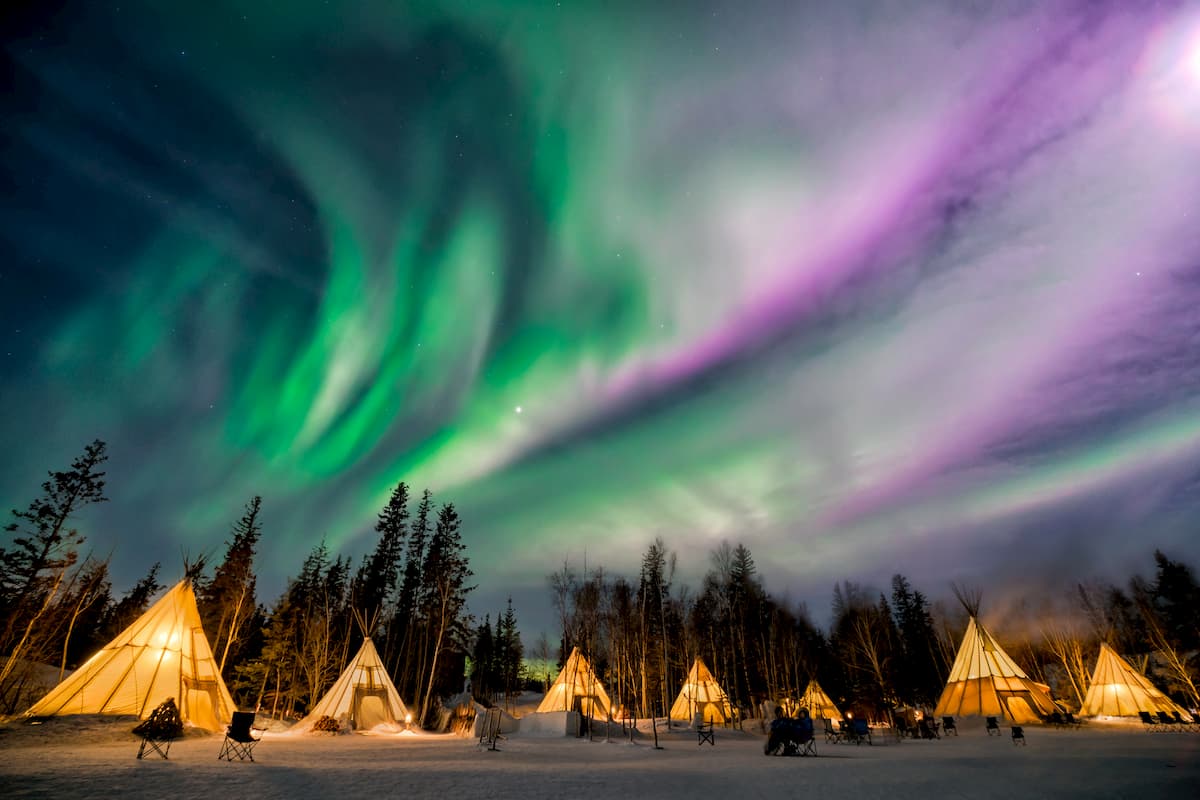