The rugged San Jacinto Mountains are located in the southernmost part of the US state of California. The range contains 59 named mountains, the highest and most prominent of which is San Jacinto Peak(10,787ft/3,228m). 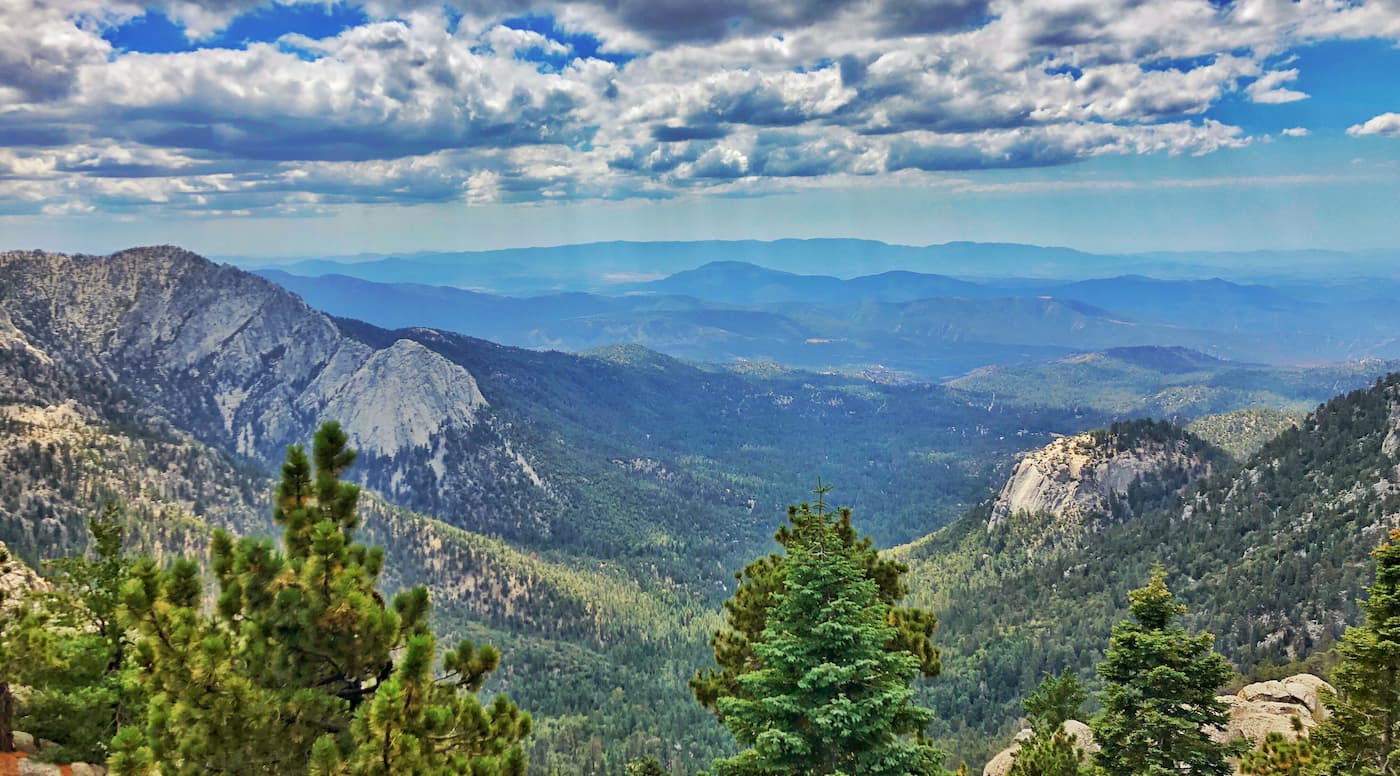 Located predominantly in Riverside County, the San Jacinto Mountains form a natural border between the Temescal Valley/Elsinore Valley region and the San Jacinto Valley as well as the vast Coachella Valley. They run for about 30 miles (50km) from north to south, starting at the southern terminus of the San Bernardino Mountains and ending just north of the Santa Rosa Mountains.

The San Jacinto Mountains run parallel to the northern part of the San Mateo Canyon Wilderness as well as the Santa Ana Mountains. They are located just to the west of Joshua Tree National Park.

The San Jacinto Mountains are also home to a number of different parcels of public land. These include:

Geologically, the San Jacinto Mountains are part of the greater California Ranges, which extend across the majority of the western edge of southern and central California. They are a large fault block composed mostly of granitic rocks.

The San Jacinto fault borders the range to the west while the San Andreas fault is to the east. Interestingly, the region is very tectonically active and sees many earthquakes each year. However, the last major quake to hit the region was more than 200 years ago.

The San Jacinto Mountains are a sky island, thanks to their relatively cool and humid conditions, especially when compared to the valley floor that surrounds them. In the range, the vegetation includes Coulter pine, California black oak, ponderosa pine, lodgepole pine, incense cedar, red fir, Jeffrey pine, and white fir.

The range is also home to a small grove of about 150 giant sequoia trees. However, these trees are not native as they were planted in the 1970s by the US Forest Service.

The San Jacinto Mountains have been home to humans for thousands of years. The Cahuilla and their ancestors, among countless others, consider the region to be part of their traditional territory.

While there are a few communities around the mountains, the range itself was never settled extensively, despite its proximity to Los Angeles and San Diego. It has been used quite a few times in the past to shoot mountain scenes in Hollywood movies.

These days, however, the range is a popular outdoor recreation area, particularly among climbers who flock to Tahquitz Peak and its 1,000 foot (304m) face. Indeed, the Yosemite Decimal System, the current climbing route rating system was developed at Tahquitz in the 1950s.

Part of the range is also included within the San Bernardino National Forest, Santa Rosa and San Jacinto Mountains National Monument, and Mount San Jacinto State Park, all of which offer ample hiking and camping opportunities to the public. The Pacific Crest Trail also travels along the main crest of the range as it makes its way northward to the San Gorgonio Wilderness.

The San Jacinto Mountains are full of great places to hike and enjoy. Here are some of the best areas to check out:

The San Bernardino National Forest encompasses much of the western portion of the San Jacinto Mountains, as well as the majority of the San Gabriel Mountains. It is located along a natural border between the Los Angeles Basin and California’s Inland Empire.

The current San Bernardino National Forest was then reestablished in 1925 by President Calvin Coolidge and now covers some 1,287 square miles (3,33 sq. km) of land. Interestingly, the forest contains parts of the two highest mountain ranges in Southern California - the San Jacintos and San Bernardino Mountains.

These days, the forest contains hundreds of miles of hiking trails, plenty of campsites, and lots of opportunities for recreation in the San Jacinto Mountains.

The monument was officially designated in 2000 through an act of Congress. It currently covers 437.6 square miles (1,133 sq. km) of land that is managed by both the Bureau of Land Management, the US Forest Service, and the Cahuilla Band of Indians.

Santa Rosa and San Jacinto Mountains National Monument was created partially to protect a special subspecies of bighorn sheep (Ovis candensis cremnobates), which is endemic to the region. There is also a small natural oasis of California fan palm (Washingtonia filifera), the only palm species that is actually native to the state. It also contains over 300 cultural sites that are important to the Cahuilla people.

There are many hiking trails in the park, including the Pacific Crest Trail. Major peaks and hiking destinations in the monument include Santa Rosa Peak, Palm View Peak, Pine Mountain, and Lion Peak.

Mount San Jacinto State Park is located in the central part of the San Jacinto Mountains. The park is home to 9 named mountains, the highest of which is San Jacinto Peak.

Interestingly Mount San Jacinto State Park was nearly closed in 2008 by then-Governor Arnold Schwarzenegger in an attempt to deal with the state’s huge budget deficit and budget crisis. However, it survived this threat and continues to welcome visitors to this day.

Most of the recreation in the park centers on San Jacinto Peak. The most adventurous among us can attempt to hike the mountain on the Cactus to Clouds Trail, which starts in Palm Springs and hikes to the summit of the mountain.

The San Jacinto Wilderness is located in the heart of the San Jacinto Mountains, just south of Mount San Jacinto State Park. It contains 7 named peaks, the highest and most prominent of which is Red Tahquitz.

The wilderness was formally designated in 1964 as a result of the Wilderness Act. These days, it contains over 32,000 acres (12,949 ha) of land that includes steep clogs, alpine peaks, dense forests, chaparral, as well as rolling desert.

There are over 48 miles (77km) of trails in the wilderness including the Palm Canyon Trail, the Pacific Crest Trail, the Spitler Peak Trail, and the Marion Mountain Trail. Permits are required for both day and overnight visitors can be obtained either from the Idyllwild Ranger Station or by filling out a mail-in form.

Here are some of the best places to stay before and after your trip to the San Jacinto Mountains.

Idyllwild, Pine Cove, and Fern Valley are three small communities that are located next to each other in the heart of the San Jacinto Mountains. In total, they have about 3,800 residents.

The towns are popular among outdoor recreationists, particularly climbers, who head to nearby Tahquitz Peak to climb. It’s also a popular location for second homeowners that want a slight reprieve from the summer heat of Southern California.

These towns are accessible by car only from Routes 74 or 243, which can be accessed from I-10 near Palm Springs or Hemet.

Palm Springs is a well-known resort city just to the east of the San Jacinto Mountains in the Coachella Valley. The city has a population of over 44,000 people and offers great access to the range.

Palm Springs is located along a number of highways, including I-10. It has good bus and train connections as well as an international airport that serves the entire Coachella Valley. 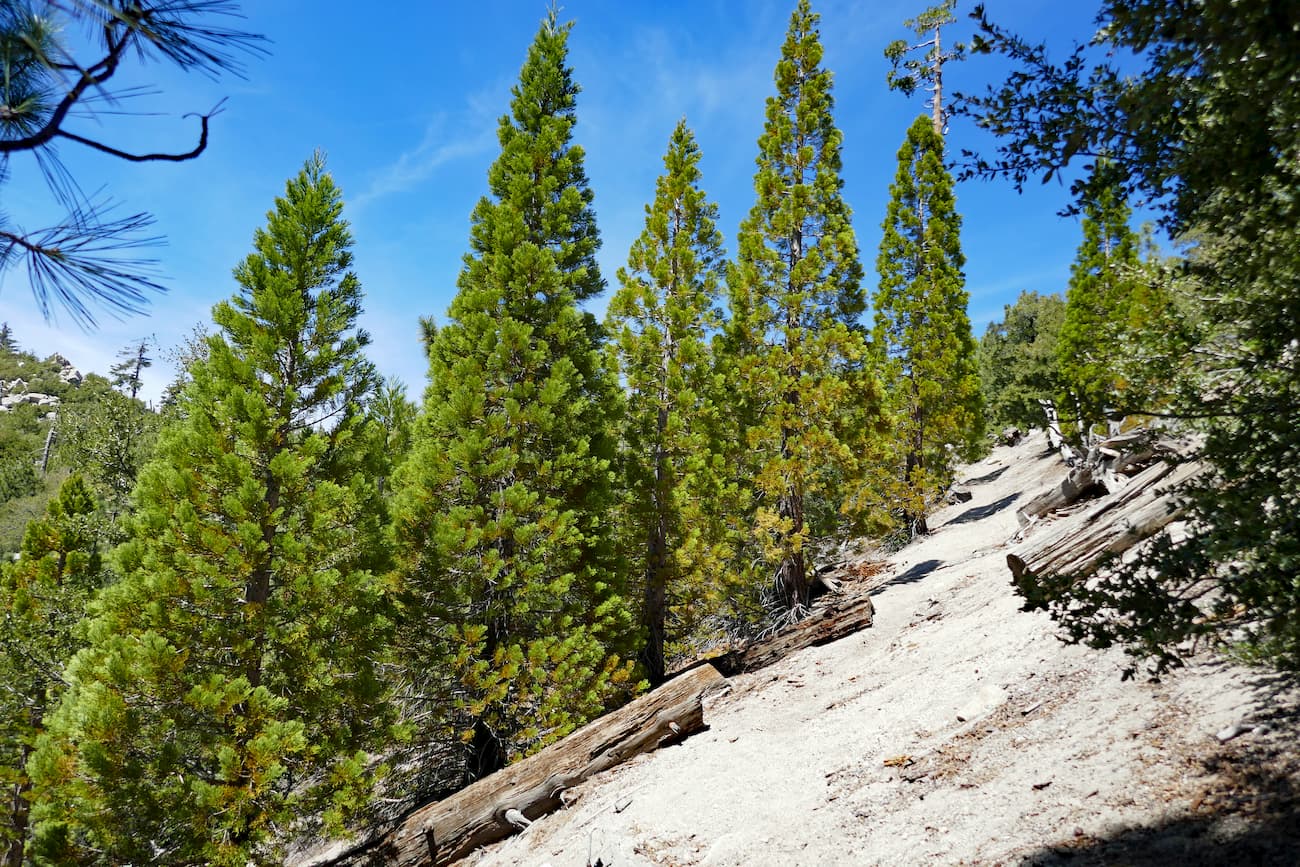 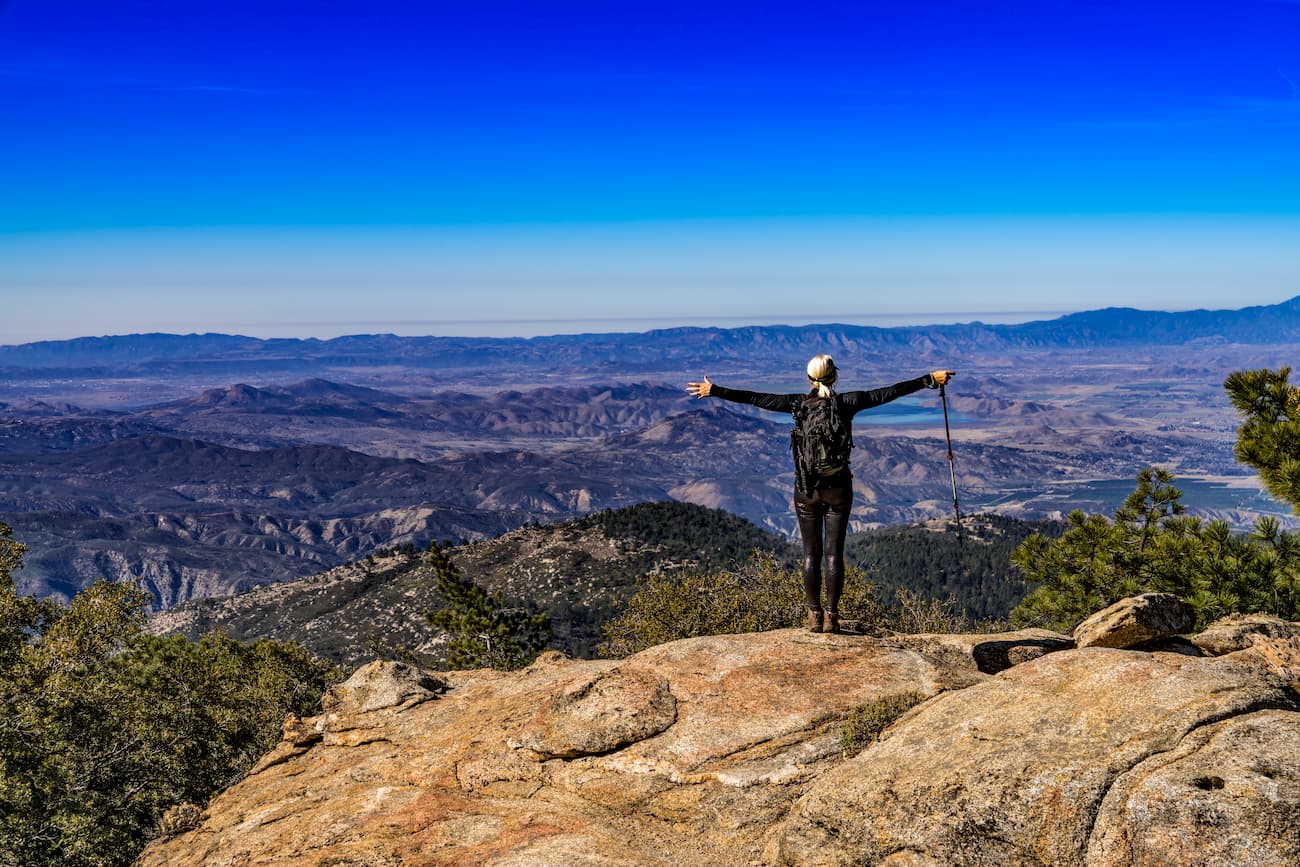 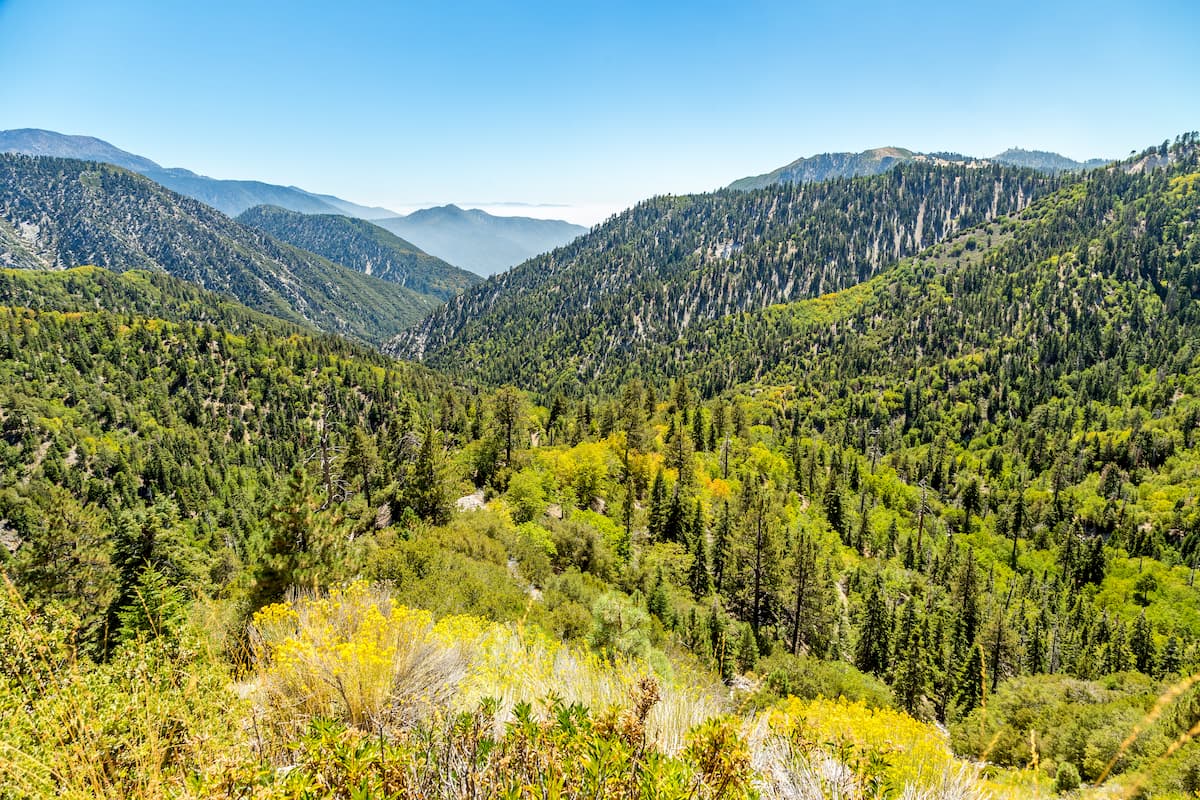 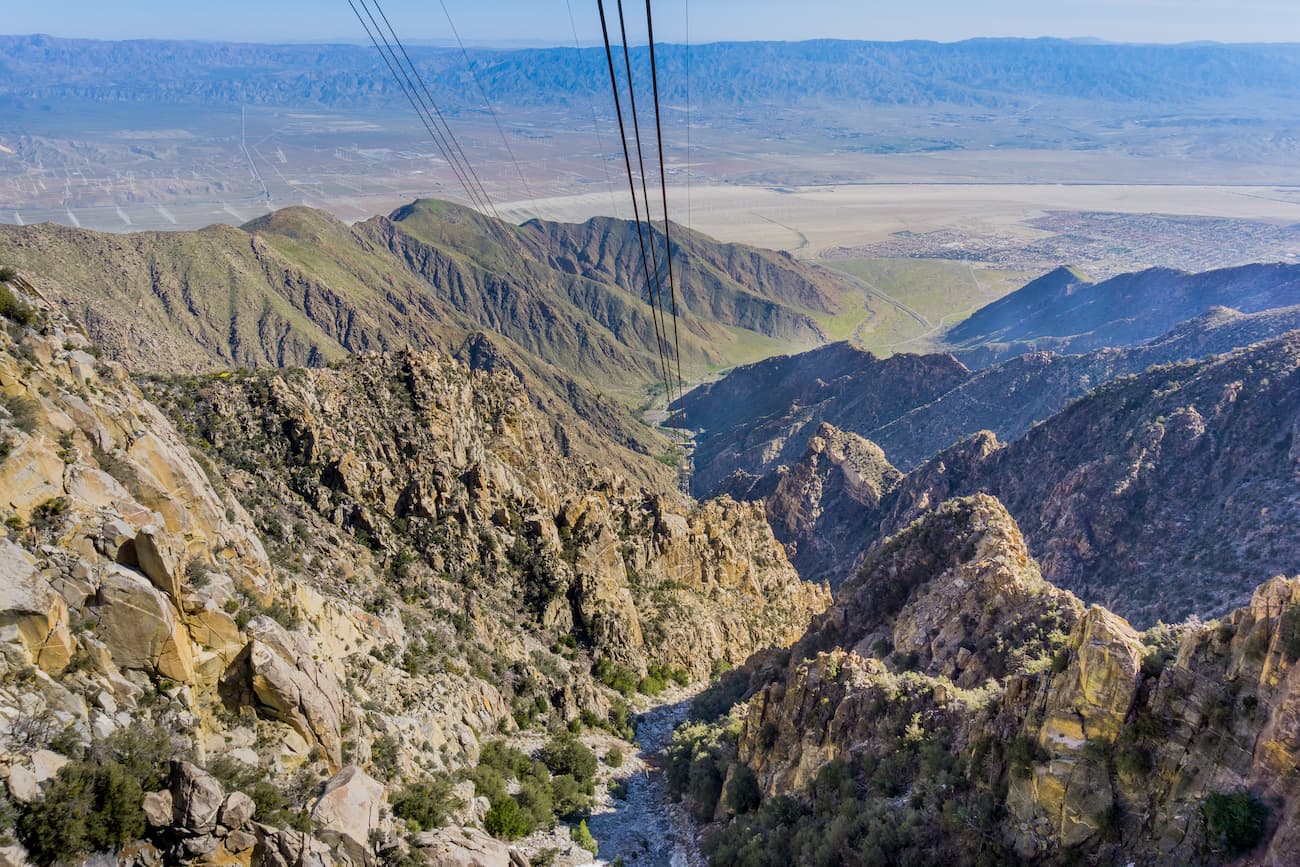 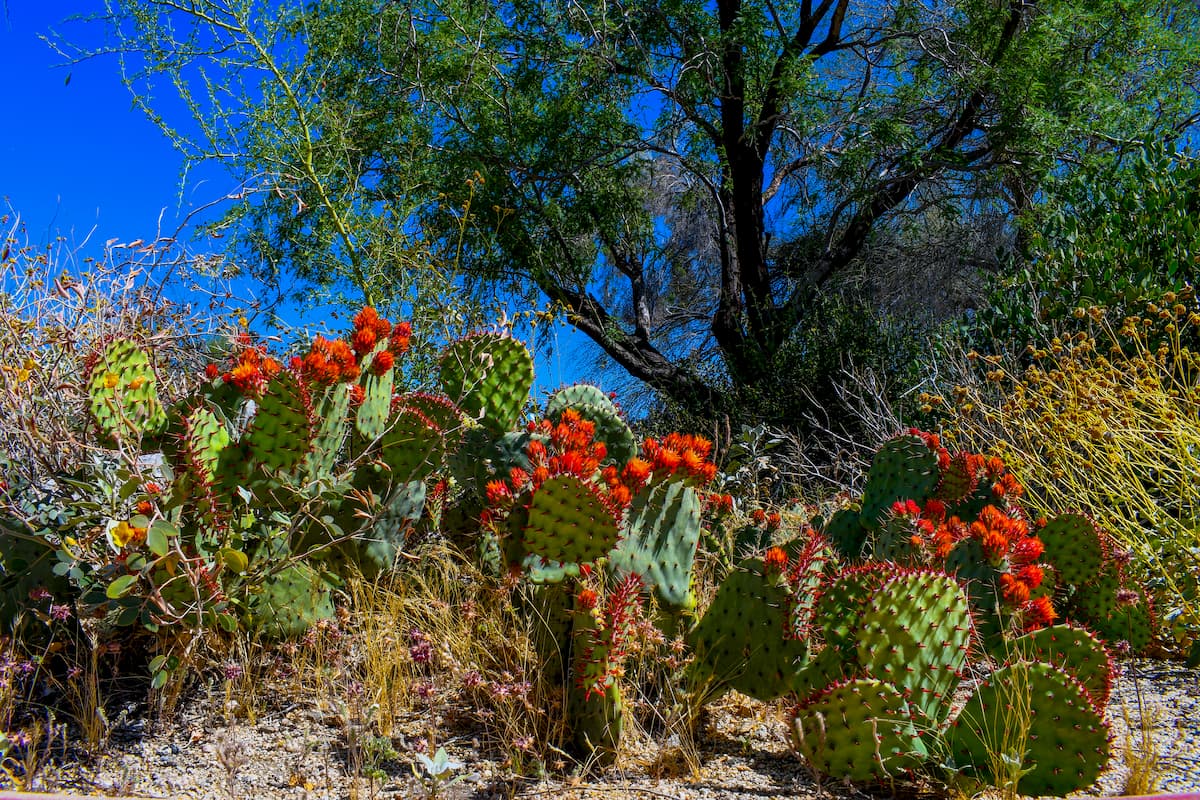