Known for its rugged and arid landscape, Anza-Borrego Desert State Park is a large swath of public land in the southern part of the US state of California. The park contains 40 named mountains, the highest of which is Combs Peak (6,188ft/1866m) and the most prominent of which is Whale Peak (5,341ft/1,628m).

Anza-Borrego Desert State Park is located within San Diego, Riverside, and Imperial Counties. It contains 915 square miles (2,371.2 sq. km) of land, which makes it the largest state park in California.

The park is located among a patchwork of other publicly-owned and protected lands. Its southern terminus is along the United States’ border with Mexico, just north of I-8. To the southeast, Anza-Borrego is bordered by the Jacumba Wilderness Area and the Jacumba National Cooperative Land and Wildlife Management Area.

The Salton Sea, as well as the Santa Rosa Wilderness and the Santa Rosa and San Jacinto Mountains National Monument form Anza-Borrego’s northern and northeastern borders. The Pine Creek Wilderness, Cuyamaca Rancho State Park, and the Cuyamaca Mountain State Wilderness are located to the west of the park.

Moreover, Anza-Borrego Desert State Park is situated to the east of the Cuyamaca Mountains, which separate it from the city of San Diego. The Salton Sink, the Imperial Valley, and the rest of the Mojave and Colorado Deserts separate the park from the Laguna Mountains to the east along California’s border with Arizona.

Anza-Borrego Desert State Park is a point of interest for many geologists. The mountains in the park are predominately part of the Santa Rosa Mountains, which are a subrange of the California Ranges.

Additionally, the park is located along the western edge of what’s known as the “Salton Trough.” The trough is a major low point in the region, and is located along a continental plate boundary.

Throughout the last 7 million years, the region saw massive deposition of sediments along the plate boundary. These sediments are rich in fossils, which provide ample evidence of the region’s paleontological past.

Interestingly, about 6 million years ago, the Salton Trough was filled with sea water from the ancient Gulf of California. During this time, large numbers of fossils were deposited in the area. Over the millenia, the region transitioned away from a marine environment into a terrestrial one as the sea dried up.

Anza-Borrego Desert State Park is known for being very hot, with average high temperatures in the summer months regularly reaching 107ºF (41.7ºC). In fact, the record high in the region is an astonishing 122ºF (50ºC). Additionally, Anza-Borrego receives an average of just 5.84in (14.7cm) of rainfall each year, so only the heartiest of plants and animals can survive in this landscape.

The park contains flora and fauna that are mostly within the Colorado Desert ecosystem of the Sonoran Desert ecoregion. However, in the northern and easternmost sections of the park, there are some California montane chaparral and woodlands ecoregions, particularly near the Santa Rosa Wilderness and Santa Rosa and San Jacinto Mountain National Monuments.

Much of Anza-Borrego is dominated by badlands and desert washes. Bajadas, or “alluvial fans” are also a common sight and are generally home to sages and creosote bush, though some microphylla woodlands with smoke trees, catclaw, and velvet mesquite are occasionally found.

Anza-Borrego is also known for having a handful of natural springs, which support a number of oases within the park. These oases feature California fan palm (Washingtonia filifera), the only native palm tree in the state of California. Oases are also some of the best places within the park to see wildlife, especially mountain lions, kit foxes, coyotes, mule deer, black-tailed jackrabbits, golden eagles, and greater roadrunners.

The park is also a known habitat for the Peninsular desert bighorn sheep, which is a subspecies of bighorn sheep that is endemic to the area. However, they are not commonly seen and they tend to avoid contact with humans.

Anza-Borrego Desert State Park is part of the ancestral homelands of a number of native peoples, including the Cahuilla, Kumeyaay, and Cupeño, among countless others. They lived in the region for thousands of years. The park contains a sizable amount of petroglyphs, as well as other archaeological remains.

Anza-Borrego’s name comes from a combination of borrego (English: sheep/lamb) and the last name of Juan Bautista de Anza, a spanish military officer and the one-time governor of Spanish New Mexico.

The Pacific Crest Trail, one of the USA’s premier long-distance hiking trails also passes through the park. Anza-Borrego is the first major section that northbound PCT hikers walk through on their way from Mexico to Canada, which is one of the driest parts of the trail.

Anza-Borrego Desert State Park contains hundreds of miles of hiking areas to enjoy. Here are some of the best places to check out:

The Slot is a cool 2.3 mile (3.7km) hike through one of Anza-Borrego’s slot canyons. It is partially shaded and offers some fun scrambling for the more adventurous among us.

The 2.9 mile (4.7km) trail to the Borrego Palm Canyon is perhaps one of the most popular in the park. It offers a nice walk up a canyon to a natural palm oasis. If you’re lucky, you’ll spot some wildlife, including the elusive desert bighorn sheep while enjoying the shade under the California fan palms.

The trail to Hellhole Canyon and Maidenhair Falls is 4.9 miles (7.9km) long and involves a small amount of scrambling over boulders as you make your way to a natural palm oasis. There are also two waterfalls along the way (during the winter and spring, that is), which make for a nice reprieve from the desert heat.

This short, but steep trail is a 1 mile (1.6km) long hike to some wind caves near Borrego Springs. Wind caves are holes in a cliffside that have been eroded away by wind, providing a great place to climb around and explore.

Here are some of the best places to stay before or after your trip into Anza-Borrego Desert State Park:

The town of Borrego Springs is located in the northern section of Anza-Borrego Desert State Park, providing some of the best access to the park’s trails. Borrego Springs is completely surrounded by the park and has a population of about 3,500 people.

Interestingly, there are no stoplights within the town and nighttime light is kept as low as possible to help protect the local views of the night sky. The town is considered an International Dark Sky Community for its expansive views of the starry sky.

Travel to and from Borrego Springs is mostly by car. The city of San Diego is just a two hour drive west from the town while Palm Springs is a one and a half hour drive north.

San Diego is situated to the west of Anza-Borrego Desert State Park along the United States’ border with Mexico. It is the second largest city in California with 1.4 million residents. 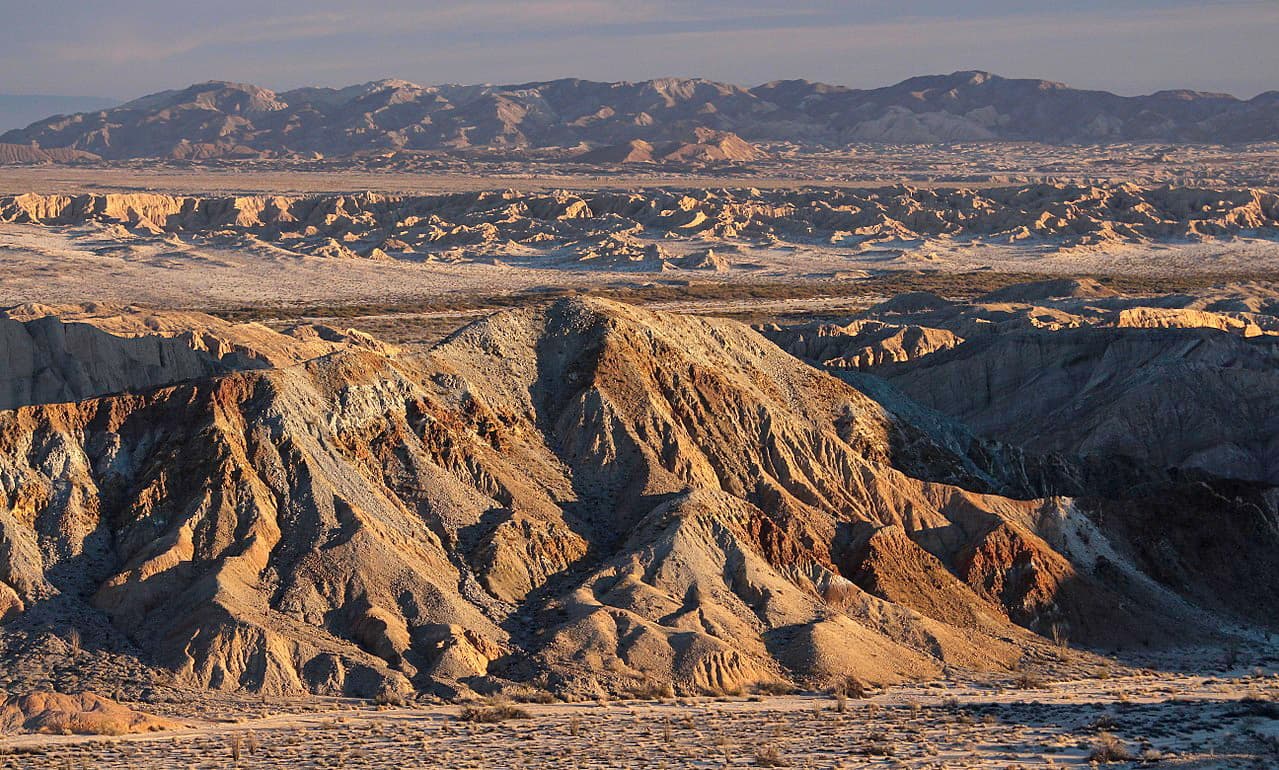 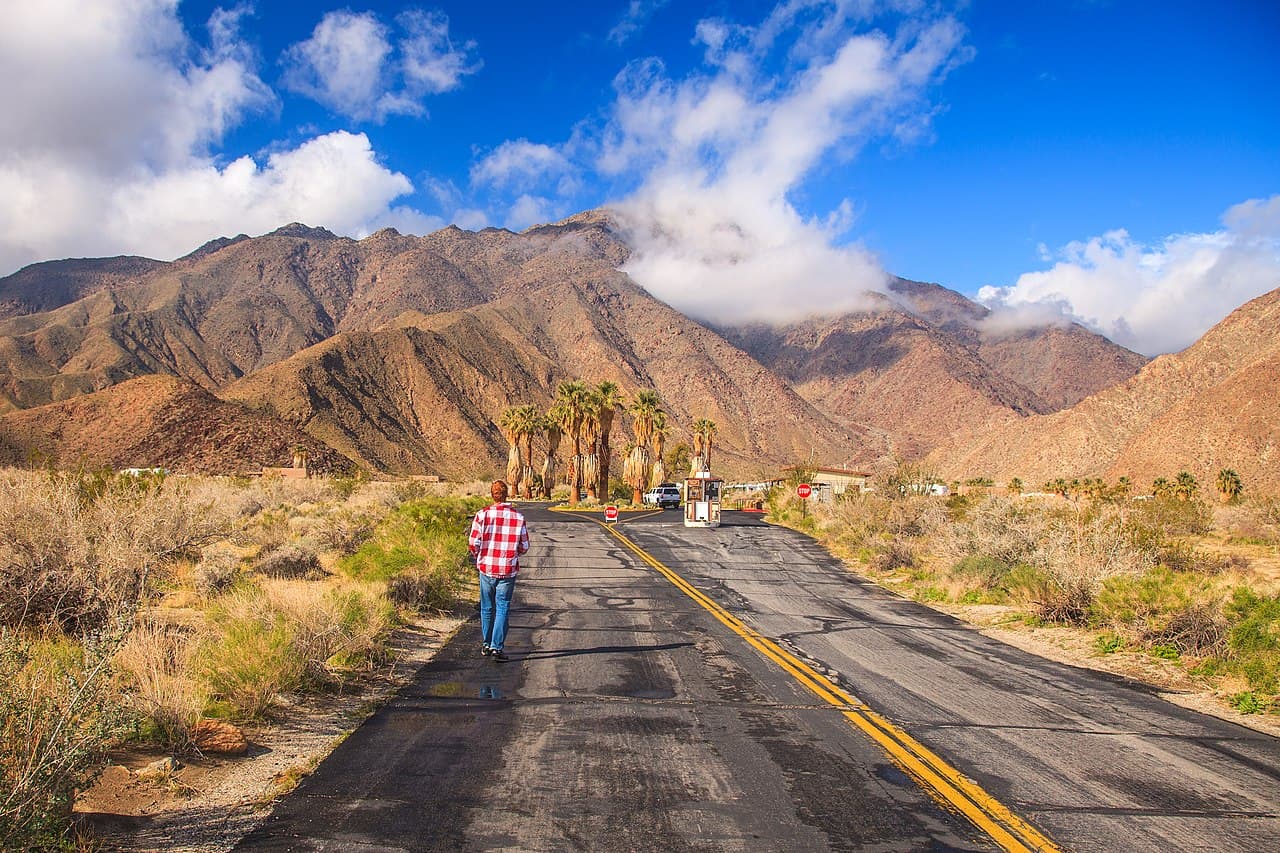 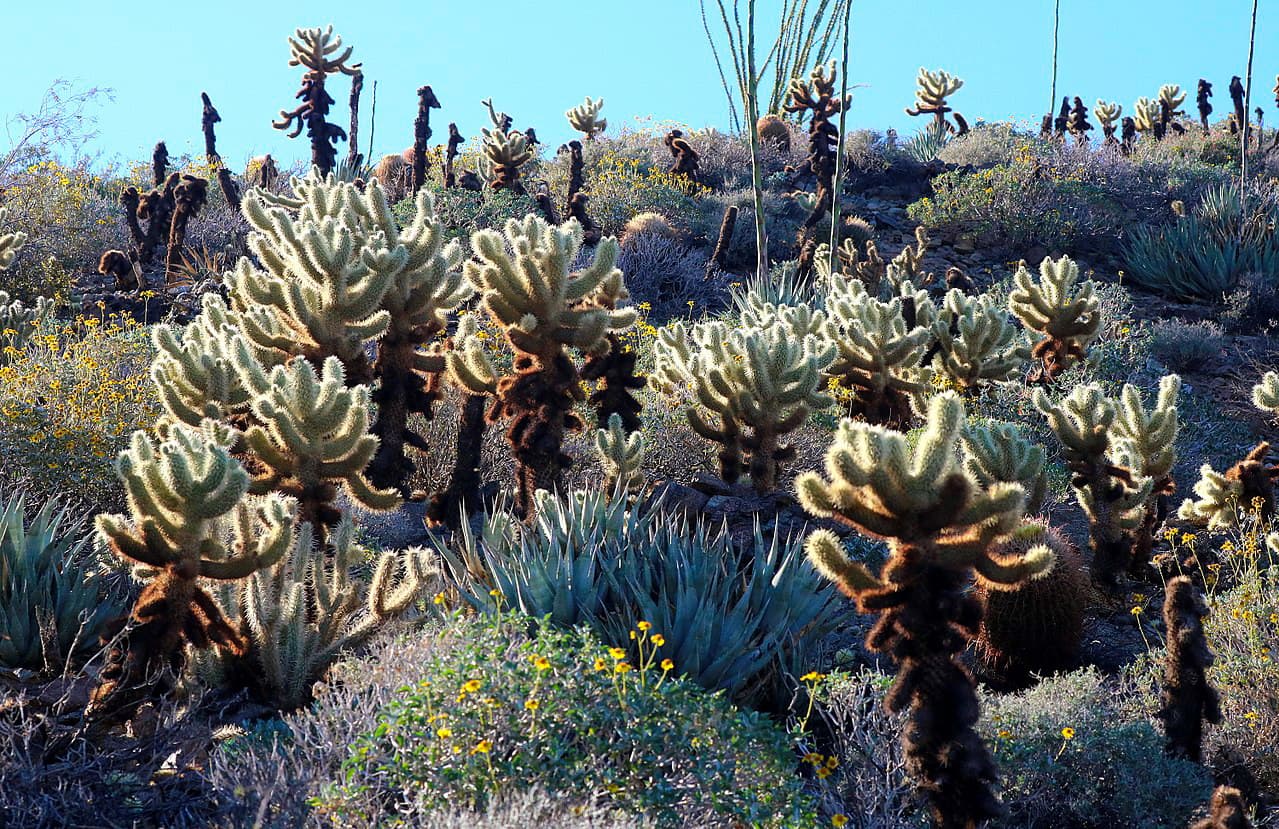 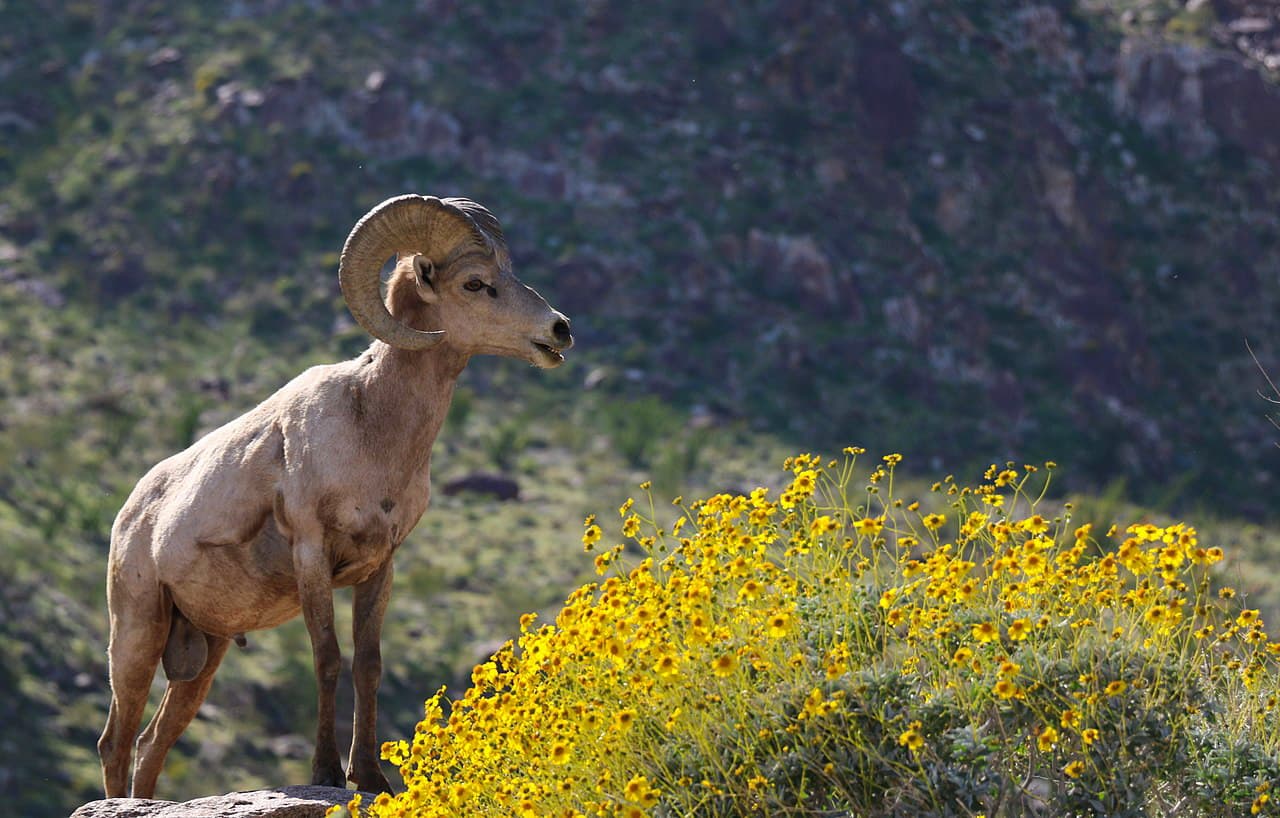 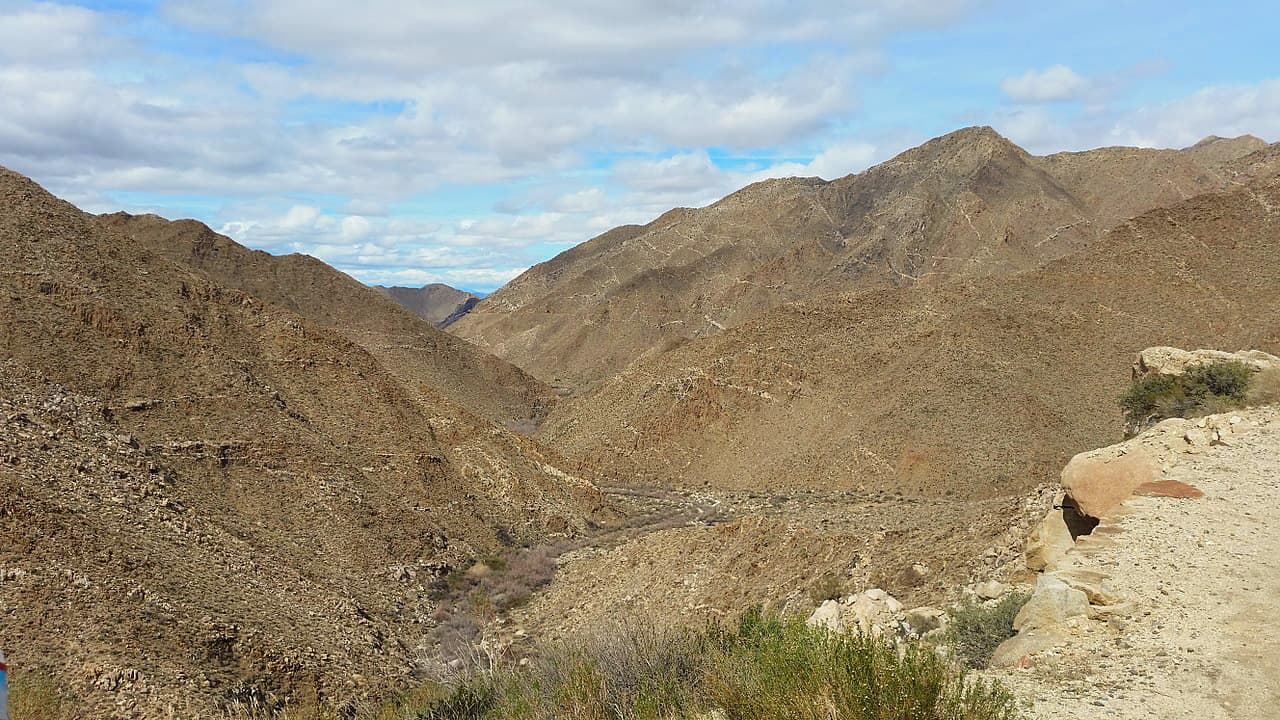