Rugged and beautiful, the Livingston Range is a collection of lofty peaks located in the northwestern part of the US state of Montana. The range contains 41 named mountains, the highest and most prominent of which is Kintla Peak (10,102ft/3,079).

The Livingston Range is situated in northwestern Montana, just to the south of the state's border with the provinces of Alberta and British Columbia in Canada. It is mostly contained within Flathead County, which covers much of the northwestern part of the state to the west of the Continental Divide.

Located within a highly mountainous part of the state of Montana, the Livingston Range is surrounded by other mountain ranges that are also within the Central Montana Rocky Mountains on all sides. Its loftiest neighbor is the Lewis Range, which borders it to the east and south.

To the west lie a number of different mountain ranges, including the Purcell Mountains and the Cabinet Mountains of the Flathead National Forest and the Kootenai National Forest. Meanwhile, to the north sit the peaks of the Canadian Rockies, Waterton Lakes National Park, Castle Wildland Provincial Park, and Akamina-Kishinena Provincial Park.

For the most part, the Livingston Range is located within Montana's Glacier National Park (not to be confused with Glacier National Park in Canada, which is substantially further north). The Livingston Range covers much of the western portion of the park while the Lewis Range is situated to the east of the Continental Divide, which follows its crest.

Combined, Waterton Lakes National Park and Glacier National Park are home to some truly fantastic geological structures which date back over 1 billion years.

The majority of the rocks within the Livingston Range, as well as the Lewis Range, started to form over 1.6 billion years ago when the Belt Sea covered much of western Montana, southern Alberta, southern British Columbia, northern Idaho, and eastern Washington. During this time, thousands of feet of sediment collected on the seafloor of the Belt Sea.

Over millions of years, these sediments consolidated and metamorphosed slightly into various sedimentary, metasedimentary, and metamorphic rocks, including quartzites, dolomites, limestone, siltite, and argillite.

The formation of these sedimentary and metasedimentary rocks was later followed by a widespread magmatic intrusion into the area approximately 750 million years ago. This intrusion left behind a dark band of igneous rock known as diorite, though this is mostly seen in the Lewis Range near Mount Cleveland.

It wasn't until about 150 million years ago, however, that the Livingston Range, Lewis Range, and the rest of the nearby mountains started to take shape. During this time, a number of tectonic plates collided on the western shores of North America, catalyzing a mountain building process that would stretch out over approximately 90 million years.

This mountain building event caused the uplift of a major slab of rock, which is several miles thick and contains rocks that are about 1.6 billion years old. These ancient rocks were actually pushed on top of much younger rocks, which are a spritely 70 million years old, in a feature that's now known as the Lewis Overthrust Fault.

Later geologic activity included the formation of various anticlines and synclines, as well as smaller faulting that helped shape the range into what we see today.

However, no discussion of the geologic history in the Livingston Range would be complete without mentioning the glacial activity that sculpted the mountains over the last 2 million years.

During the Pleistocene, the Livingston Range, like much of the surrounding region, was repeatedly glaciated. These massive ice sheets helped to carve out many of the range's most characteristic features, such as cirques, tarns, aretes, and U-shaped valleys. While the icy conditions of this period are long gone, the region does have a handful of smaller alpine glaciers that likely formed during the last 6,000 to 8,000 years.

The Livingston Range, like much of the rest of Glacier National Park, is home to a surprisingly rich array of flora and fauna. In particular, the park is the meeting point for 4 different floristic provinces, including the Great Plains, the Cordilleran, the Boreal, and the Arctic-Alpine, however, only the latter 3 of these provinces are found in the Livingston Range.

On the western side of the park, where we find the Livingston Range, the landscape receives more precipitation than on the eastern side of the Divide. Although there isn't a massive difference in annual precipitation totals, the moist conditions in the Livingston Range do allow for the proliferation of some cedar-hemlock forests, which are more commonly found in the Pacific Northwest of North America.

As far as wildlife goes, the region is home to some fantastic fauna, including grizzly bears, Canadian lynx, wolverine, mountain goats, moose, elk, bighorn sheep, mule deer, white-tailed deer, mountain lion, coyotes, marmots, and bobcats. It's also believed that wolves were able to recolonize the region on their own without human intervention in the late 20th century, after being extirpated from the area.

Bird life in the range is also quite spectacular, and it includes some charismatic species, such as harlequin duck, peregrine falcons, bald eagles, golden eagles, Canada goose, Clark's nutcrackers, and Steller's jays.

Northern Montana and the Livingston Range, including what is now Glacier National Park, has been home to humans for thousands of years.

In particular, the ancestors of the Confederated Salish and Kootenai Tribes, the Cheyenne, and the Shoshone, among others lived in the region for countless generations before they were pushed off their land throughout the 19th and 20th centuries. Other nations, including the Blackfeet Nation consider the region to be part of their ancestral homelands, though the Blackfeet Indian Reservation, which is among the largest in the US, is now located well east of the range.

By the early 19th century, fur trappers from France, Spain, and England started to frequent the area in search of beaver pelts, which were particularly valuable at the time. Some years later, the Lewis and Clark Expedition came within a few dozen miles of the Livingston Range, but they stayed well south of what would later become Glacier National Park.

While the advent of the Great Northern Railway in the late 1890s brought tourists and homesteaders to the region and to the Lewis Range, the more remote Livingston Range went relatively undeveloped by European-Americans.

At the same time, pressure from mining interests pushed the US Government to sign a treaty with the Blackfeet Nation to acquire land to the east of the Livingston Range, though the US Government later reneged on many parts of this treaty, including provisions that allowed for Indigenous hunting and gathering in the region. No large deposits of copper and gold were ever found in the region but the land just east of the range was first protected as a forest preserve under an act of Congress in 1900.

The land in and around the remote Livingston Range continued to go fairly undeveloped during this time, with the exception of some small homesteads in the northwestern part of the range. In 1910, the region was then re-designated as a national park, which makes it older than the US National Park Service, which was established in 1916.

Moreover, in 1932, the Livingston Range and the Lewis Range were included in the new Waterton-Glacier International Peace Park, which is a Biosphere Reserve and UNESCO World Heritage Site that includes both Waterton Lakes National Park in Alberta and Glacier National Park in Montana.

Although much of the Livingston Range is fairly remote, there are some great hiking opportunities in the area. Here are some of the best trails to check out.

Starting off at the Bowman Lake Campground, this steep, yet rewarding trail climbs about 2,900 feet (884m) over 5.6 miles (9 km) one way to reach a stunning lookout on Numa Ridge. At the top, you can sit back and enjoy the view, or you can continue onward to the summit of Numa Peak if you're looking to tackle a bit of extra mileage during the day.

A relatively casual trail that travels along the western shoreline of Lake McDonald, this path is 7.4 miles (11.9km) long, one way. It gains minimal elevation along the way, but provides great views of the lake and the surrounding region.

Steep as can be, the Mount Brown Lookout Trail is a strenuous hike that's perfect for anyone that really wants some great views of the Livingston Range. Starting out at the Sperry Trailhead, this trail gains 4,325 feet (1,318m) over 5.2 miles (8.4km) one way, until you reach a lookout with truly spectacular vistas on Mount Brown.

Sperry Chalet was one of the 2 remaining original backcountry chalets located in Glacier National Park, having first opened in 1914. The chalet unfortunately burned down in 2017 during the Sprague Fire, which was started by a lighting strike.

Thankfully, Sperry Chalet was rebuilt between 2018 and 2020 in the aftermath of the fire, though reservations are required if you want to stay in the chalet during the summer season.

The chalet is only accessible on foot or on horseback on a 6.3 mile (10.1 km) long trail that gains 3,593' (1,046m) of elevation from the Sperry Trailhead. Keep in mind that the Sprague Fire burnt much of the forest cover in the region, so there is minimal shade on the trail in the middle of the summer.

The Livingston Range is located in a fairly remote part of Montana, but there are some great towns nearby that make for a great place to stay during your adventures.

Whitefish is a city of some 6,300 residents located to the southwest of the Livingston Range. It is a ski resort town, thanks to the nearby Whitefish Mountain Resort, and it is a popular outdoor recreation destination.

The city is accessible by road and by Amtrak train, which connects Portland and Seattle to Chicago. Whitefish also has an airport with service to major cities in the western US.

The small town of West Glacier is, as the name suggests, located to the west of Glacier National Park. It is to the southwest of Lake McDonald and the Going to the Sun Road, which traverses the park. West Glacier is only accessible by road, but it is a great starting point for adventures into the Livingston Range.

Although it's located quite a far distance to the south of the Livingston Range, the city of Missoula is the second largest in the state, with over 75,000 residents, and it is a commercial center of the region. Missoula is located along I-90 and it has an international airport that offers regular flights around the United States. 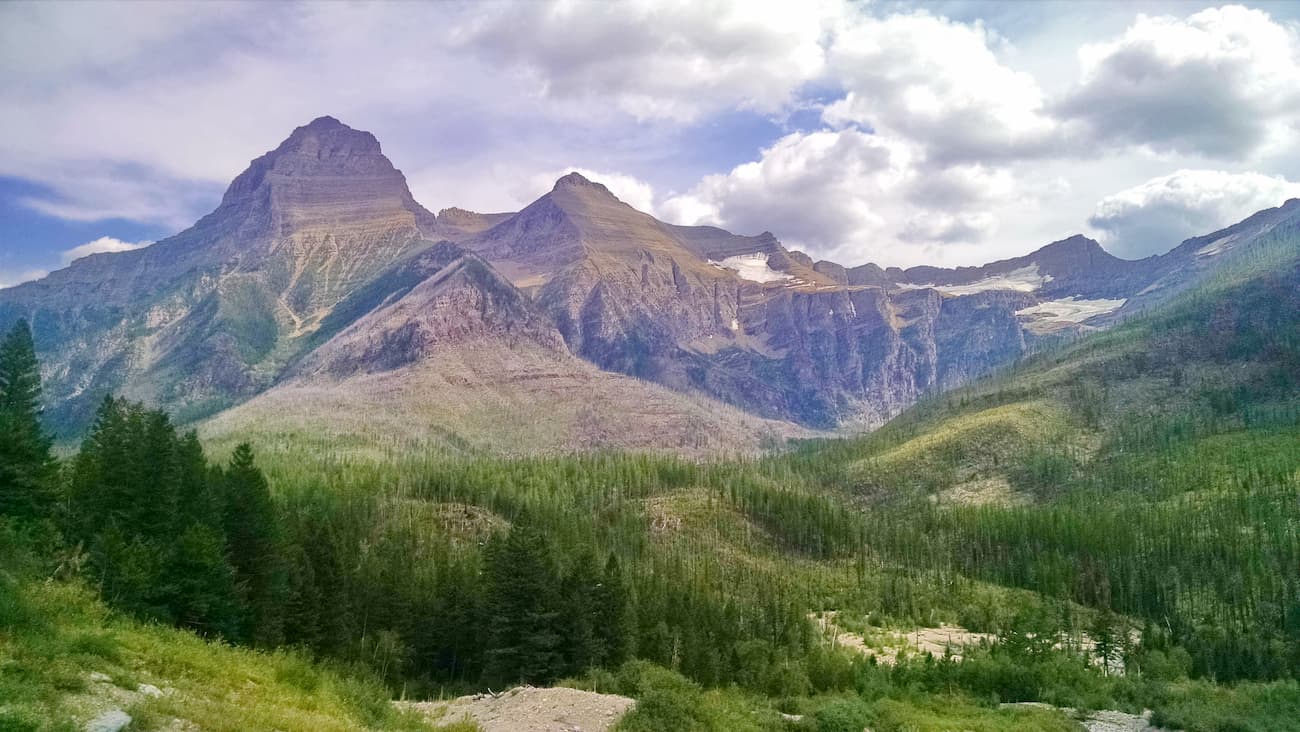 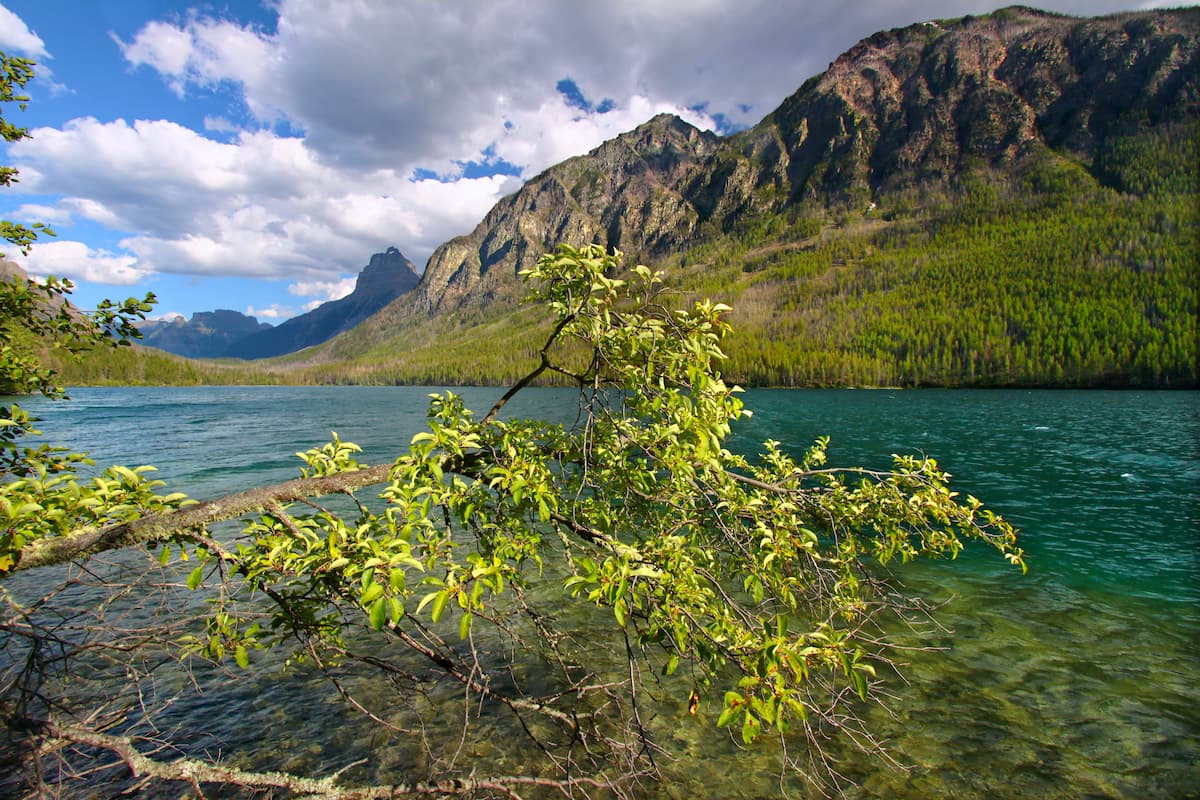 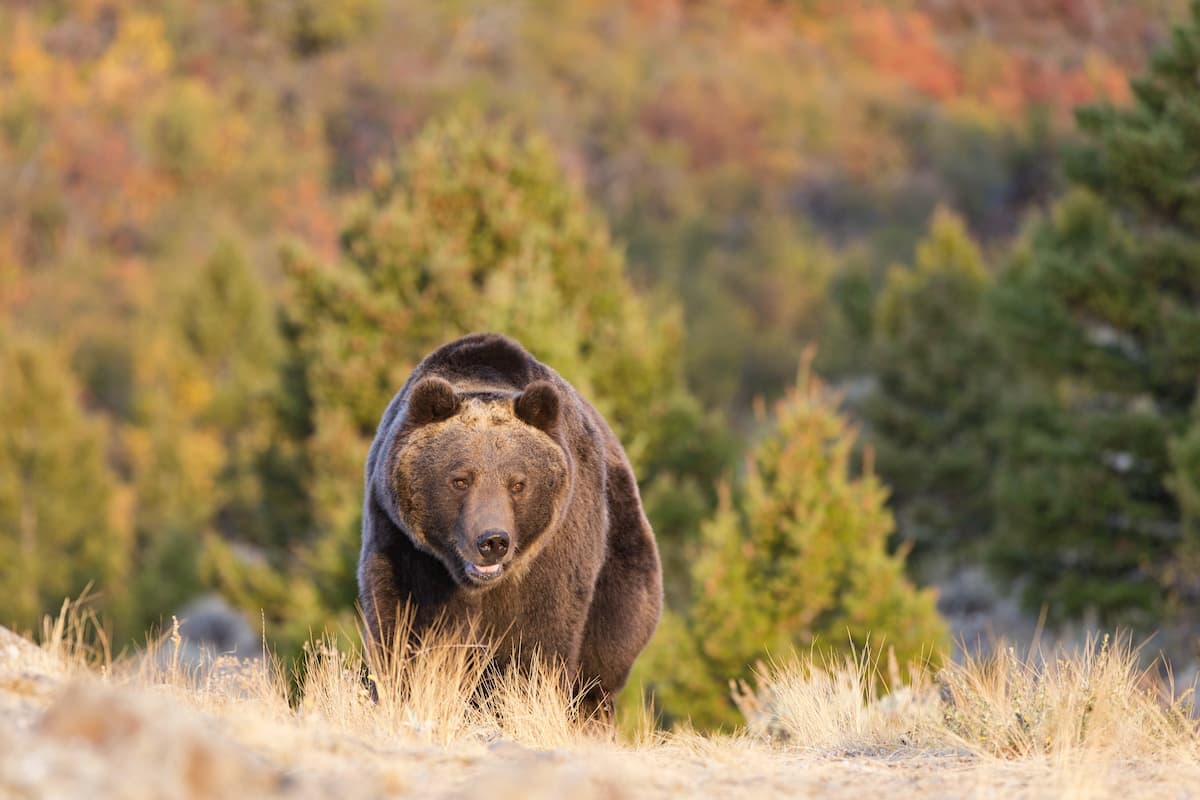 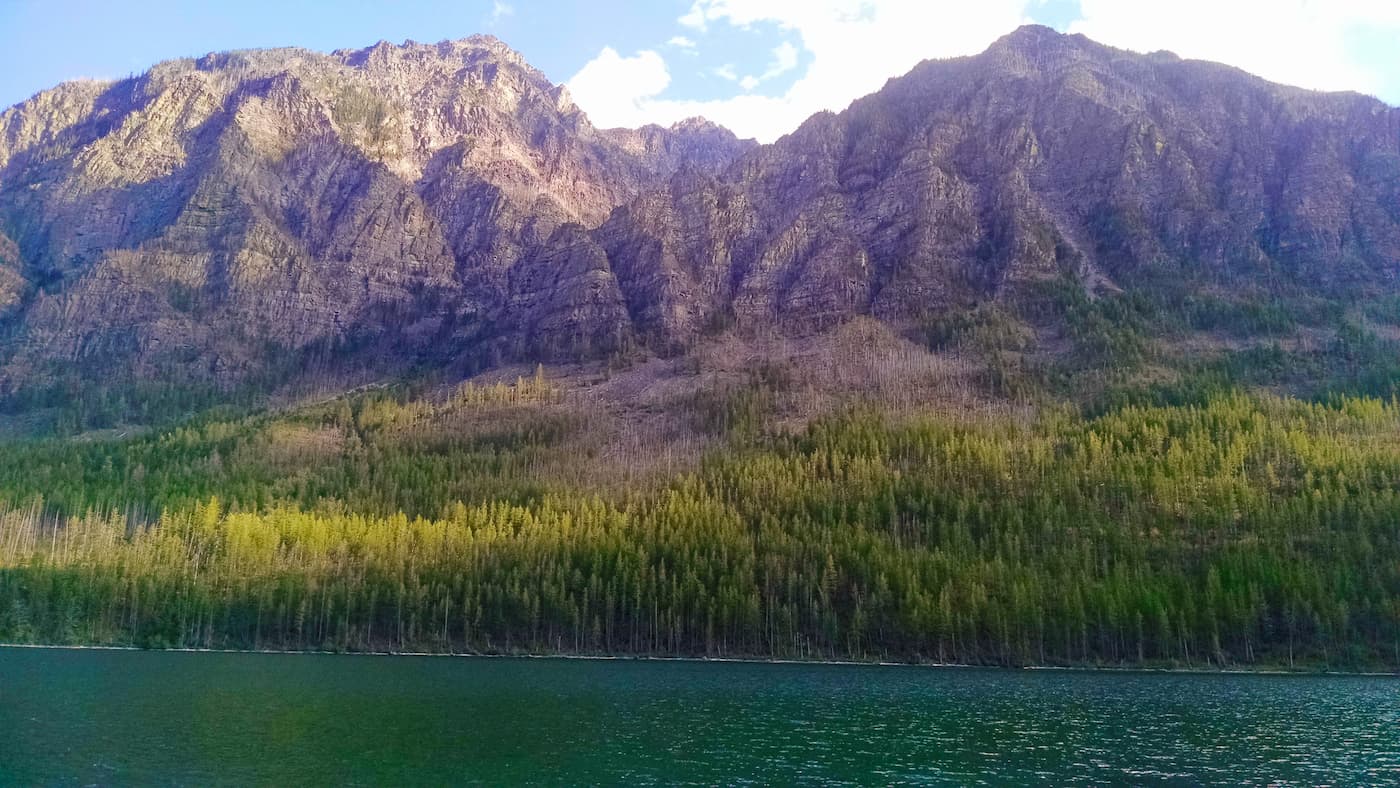 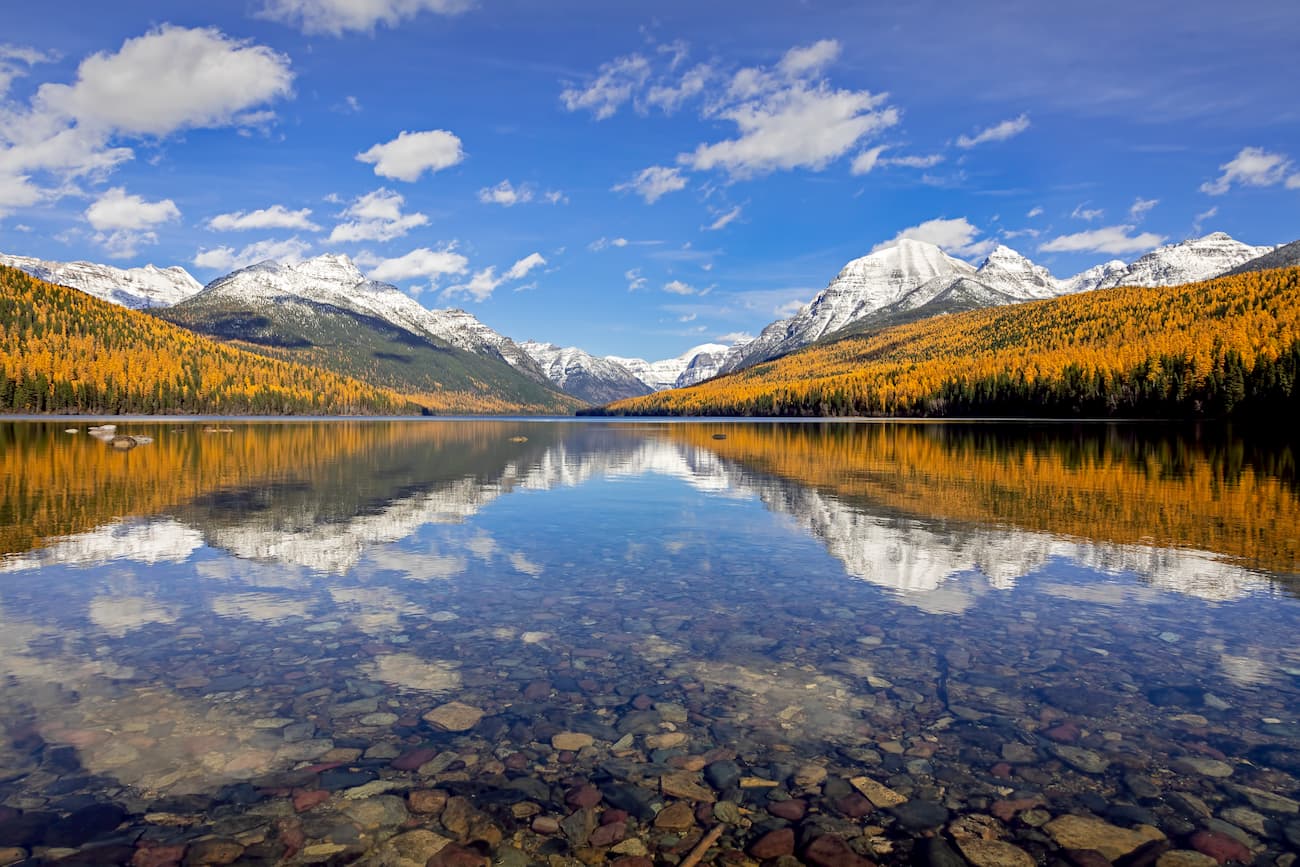 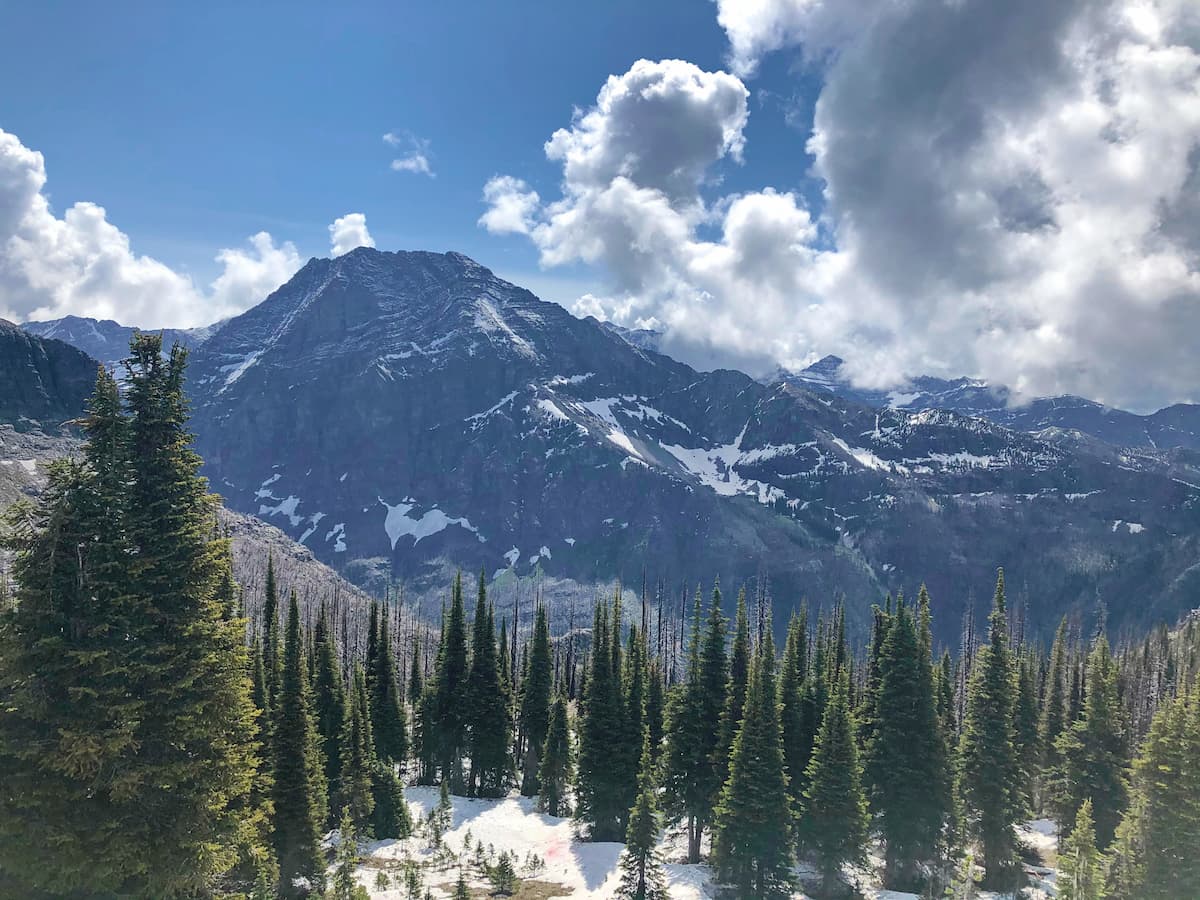