The Lewis Range rises from the plans across northern Montana and extends into southern Alberta, Canada. The range, which was formed over 170 million years ago as a result of the Lewis Overthrust, consists of stratified rocks of Algonkian age. 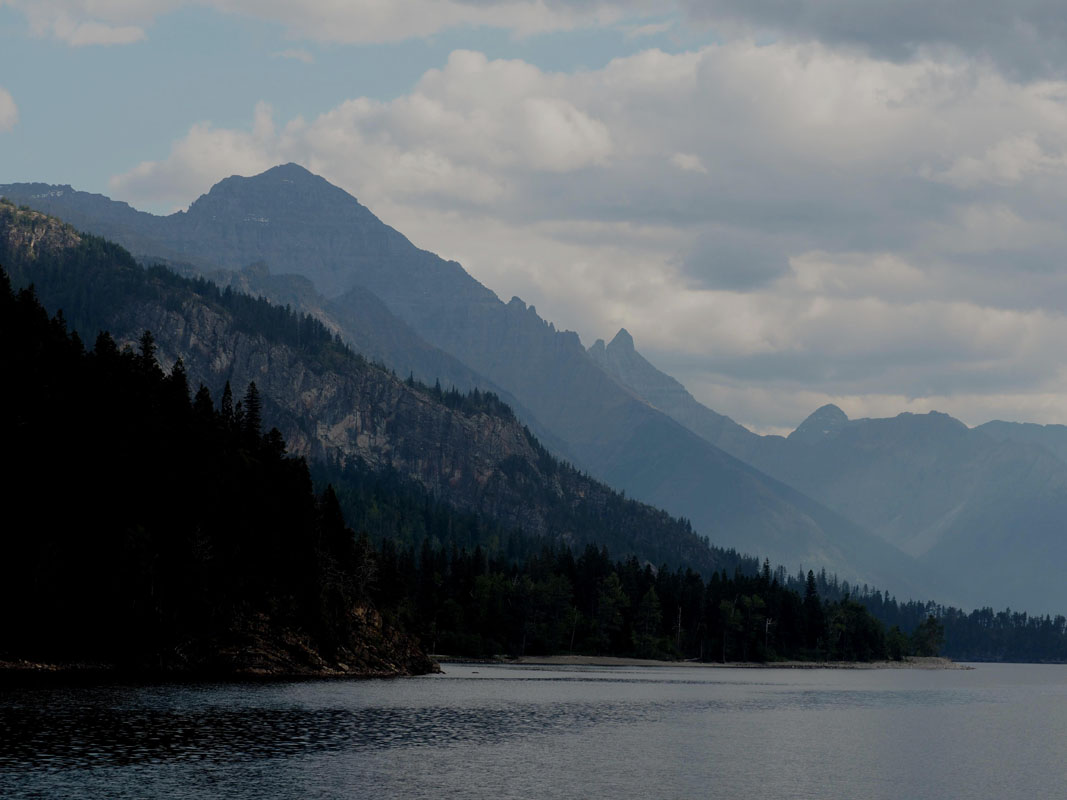 Additional noteworthy peaks include Mount Stimson, Mount Jackson, Mount Siyeh, and the isolated Chief Mountain. The range is located in Waterton-Glacier International Peace Park and the Bob Marshall Wilderness Complex in Montana. The Continental Divide also follows the crest of the Lewis Range and spans across the uppermost section of the range.

Interestingly, the first recorded observation of a glacier in Montana is said to have been discovered within the Lewis Range. In 1873, lieutenants John Van Orsdale and Charles Woodruff lead the 7th Infantry through the forest of the Lewis Range and stumbled upon a glacier, in what is known today as Glacier National Park.

Today, the total ice-covered area of the Lewis and nearby Livingston ranges in Glacier National Park, in particular, represents more than half of the total ice-covered area of Montana. Several of the largest glaciers in the state of Montana, including Blackfoot Glacier, are found in the Lewis Range. Blackfoot Glacier, which sits on the north side of Blackfoot Mountain and nearby Harrison and Jackson Glaciers, is closely monitored to help understand the impacts of global climate change.

Mount Jackson and the Jackson Glacier, Clements Mountain, Mount Oberlin, and many other Lewis Range monoliths are often appreciated from the iconic Going-to-the-Sun Road in Glacier National Park.

Often referred to as “The Crown of the Continent,” Glacier National Park offers visitors countless opportunities to explore pristine forests, alpine, meadows, spectacular lakes, and climb rugged mountains. There are over 700 miles of trails in Glacier, making it a hiker’s paradise. The park encompasses over a million acres and includes 130 named lakes, more than 1,000 species of plants, and a variety of wildlife including grizzly bears, moose, and mountain goats. I fact, Glacier has almost all of its original native plants and animal species. Of the estimated 150 glaciers that once existed in the park, approximately 25 active glaciers remain. Popular hikes and adventures in Glacier include:

Going to the Sun Road - Portions of Going-to-the-Sun Road remain open all year and provide access to some of the most iconic and scenic spots in the park. Jackson Glacier Overlook, which sits between Logan Pass and St. Mary, affords the best opportunity to see a glacier from the road. However, there are several other scenic overlooks and vistas like McDonald Creek Overlook, Logan Pass, Weeping Wall, and Avalanche Creek.

Grinnell Glacier - The 7.5-mile hike to Grinnell Glacier begins from the upper boat dock on Lake Josephine or from the Many Glacier Hotel. A trek to Grinnell Glacier is the perfect way to experience the beauty and wildlife in this region - You even get to hike through a waterfall! This trail is a hallmark of Glacier National Park and is a favorite among visitors.

Iceberg Lake – This popular 9.5-mile trail features commanding views of Mount Grinnell, Swiftcurrent Mountain, Mount Wilbur, and the Ptarmigan Wall. This trail is also known for being a hotspot for wildlife viewing and prime Grizzly territory. It’s important to be bear-aware and make a lot of noise on trail. In most cases, Grizzly bears can be seen at a distance, appreciating the lush meadows and berries along the Iceberg Lake trail.

Waterton, which contains 195 sq. miles of rugged mountains and wilderness, was Canada’s fourth national park. Home to crystalline lakes, cascading waterfall, colorful rocks and breathtaking mountain vistas, Ranging in elevation from 4,232 feet to over 9,500-feet at the top of Mount Blakiston, Waterton is where the prairies of Alberta meet the craggy summits of the Rocky Mountains. The only commercial facilities available within the park are located at the Waterton Park townsite, which add to the park’s relative remoteness. A couple of the popular trails and attractions in Waterton include:

Crypt Lake – This well-known, 11-mile trail ascends 2,100 feet in elevation and takes approximately 6 hours to complete. The trail starts with a quick boat ride across Upper Waterton Lake, before traversing to several waterfalls, ascending a steel ladder, traveling through a narrow tunnel and over a harrowing cliff via a steel cable. If you’re a thrill-seeker, this is the trail for you! The southern tip of Crypt Lake hugs the United States/Canada border, crossing into the states for just 160 feet. But don’t bother packing your passport, you probably won’t even realize you’ve crossed the border.

Forum Lake - Forum Lake is another turquoise alpine lake tucked within Waterton’s mountainous landscape. This semi-hidden gem is found near Akamina Pass and is one of the most beautiful hikes the park has to offer. Once you’re on the trail, you’ll spend some time wandering through the dense forest, periodically passing open field and waterfalls. The lake itself is serene and surrounded by mountains, so don’t forget to pack a lunch and enjoy the views.

Bob Marshall is found in the northern Rocky Mountains along the Continental Divide. This region is incredibly primitive and one of the most completely preserved mountain ecosystems in the world. This is where travelers go to be immersed in nature. Rugged peaks, alpine lakes, rumbling waterfalls, grassy meadows, and shimmering streams are just a few things you can expect from Bob Marshall. This area is particularly renowned for fishing and backpacking potential, though most visitors will enter the Complex on horseback. In fact, this is probably one of the few wilderness areas where equestrians still outnumber hikers and backpackers. Nevertheless, Bob Marshall offers more than 1,000 miles of a well-developed trail system, with maintained paths giving way to less well managed trails as you travel deeper into Montana's largest Wilderness.

Swiftcurrent is the perfect basecamp for exploring Glacier National Park. This iconic inn features 95 rustic cabins and motor inn rooms, a restaurant, a fully stocked camp store, and is within close-proximity to several infamous Glacier hiking trails including Iceberg Lake, Ptarmigan Lake, and an infamous trail that leads over Swiftcurrent Pass. Being that Swiftcurrent Motor Inn & Cabins is the gateway to so many of Glacier’s spectacular trails, it’s popular and reservations need to be made well in advance.

Many Glacier Hotel sits on the shores of Swiftcurrent Lake in Glacier National Park. The location of the hotel gives visitors easy access to a variety of amenities and outdoor activities including boat tours, cruises, ranger-led programs, hiking trails, and Red Bus tours. The hotel itself is relatively secluded and contains 205 guest rooms, some with lakeside views. Many Glacier is a historic hotel, so visitors should expect modest amenities and historic charm.

Standing proudly on a bluff overlooking the Waterton Village, the Prince of Wales Hotel is an iconic marker for Waterton Lakes National Park. In fact, the hotel was designated a National Historic Site of Canada in 1992. The hotel sits directly within the park, making it the perfect place to stay when exploring Waterton Lakes. After you’ve spent the day exploring the peaks and valleys in the park, you can kick back and enjoy panoramic views overlooking Upper Waterton Lake directly from the hotel. 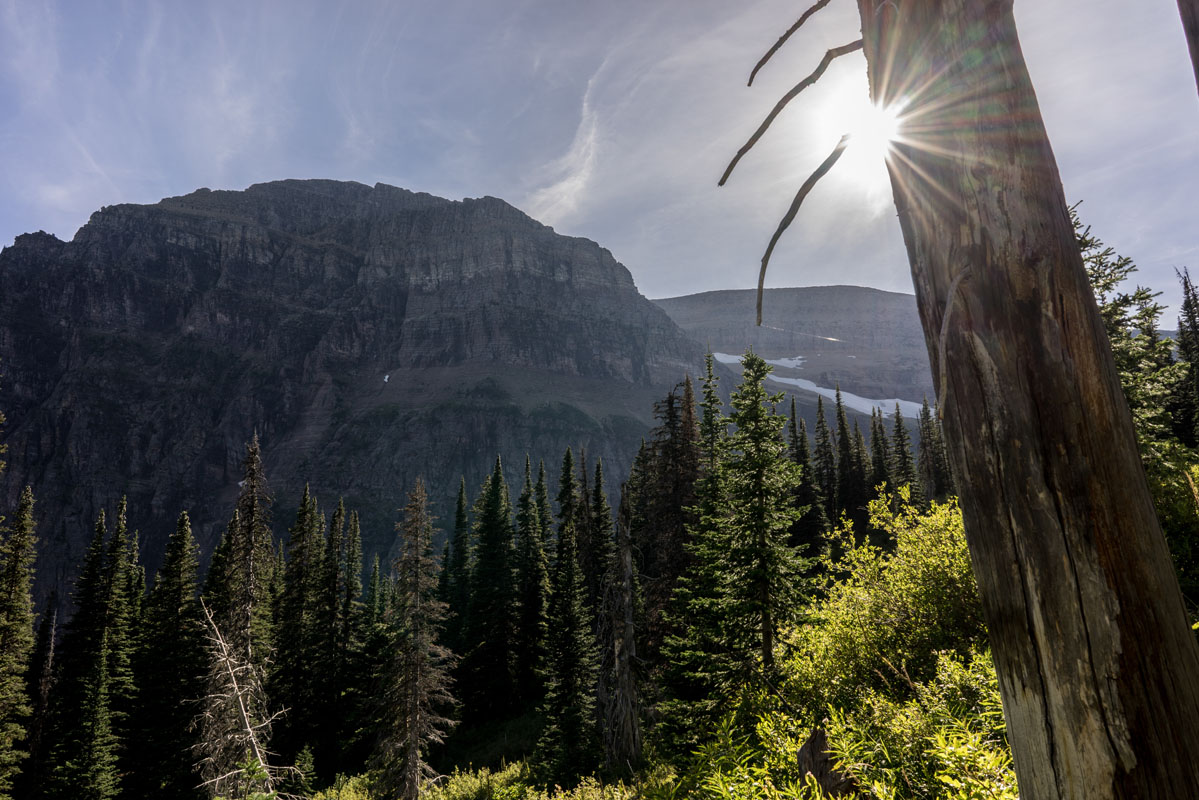 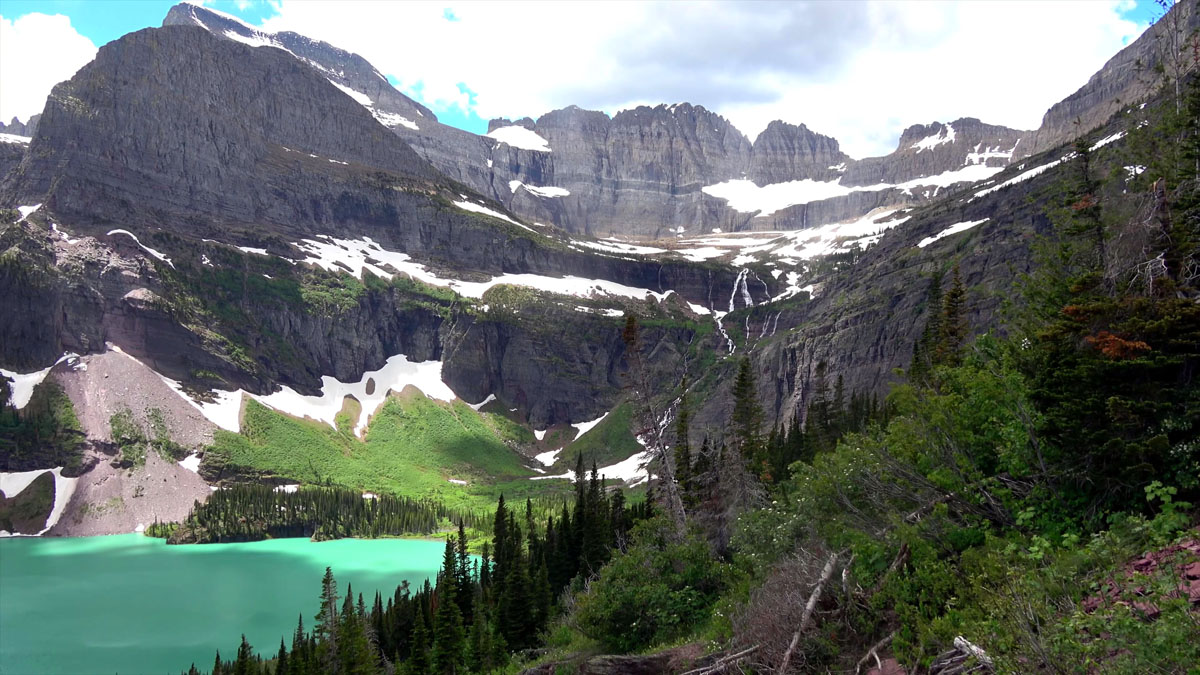 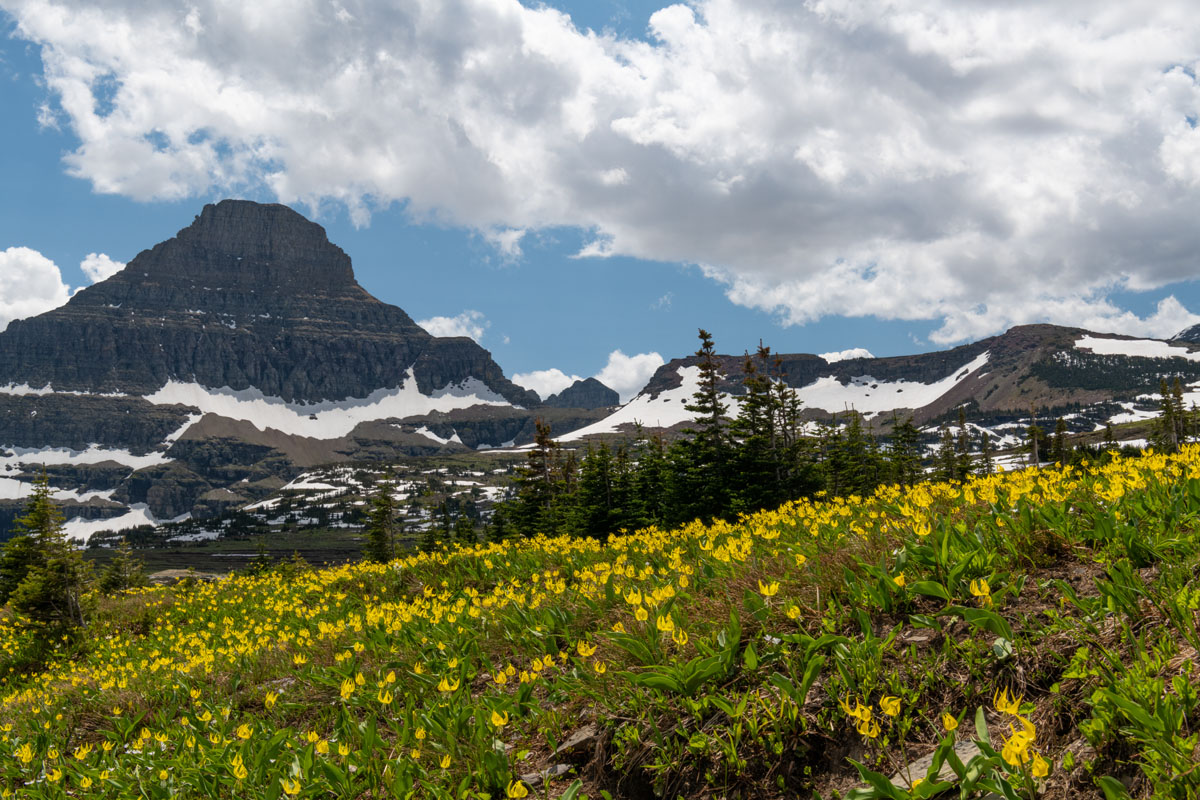 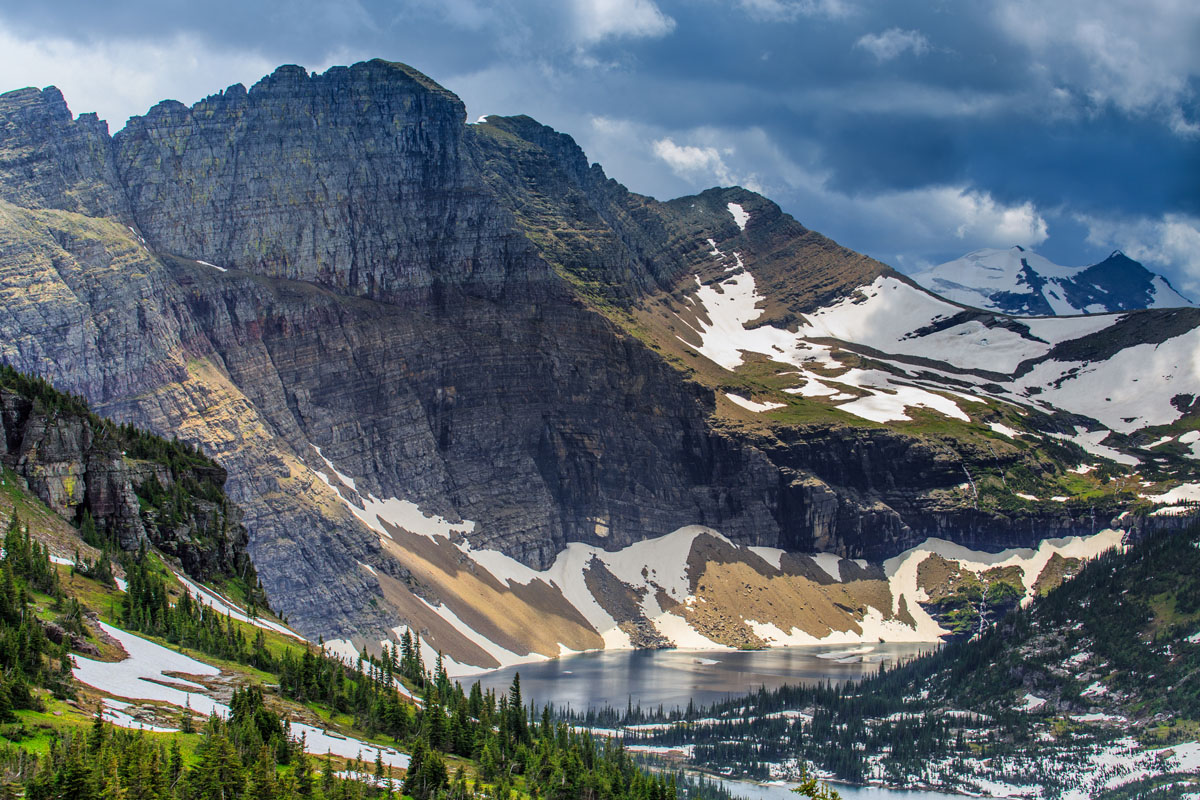 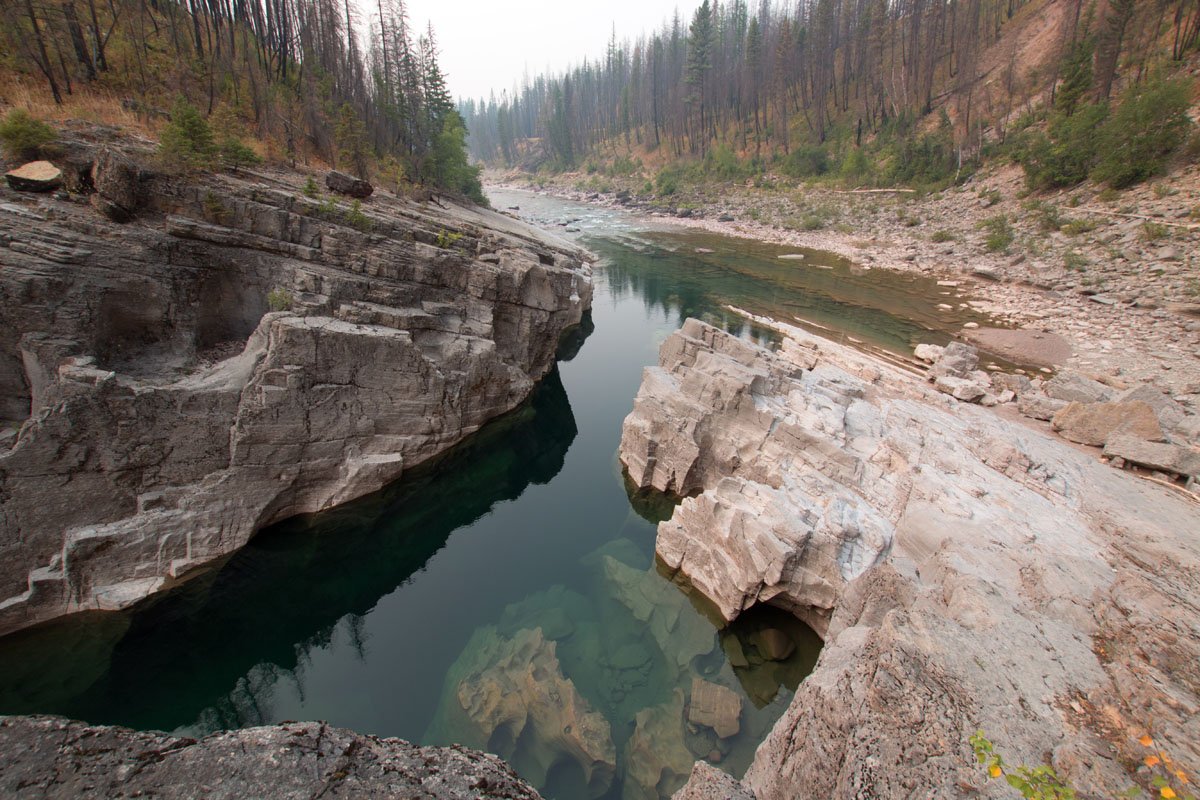 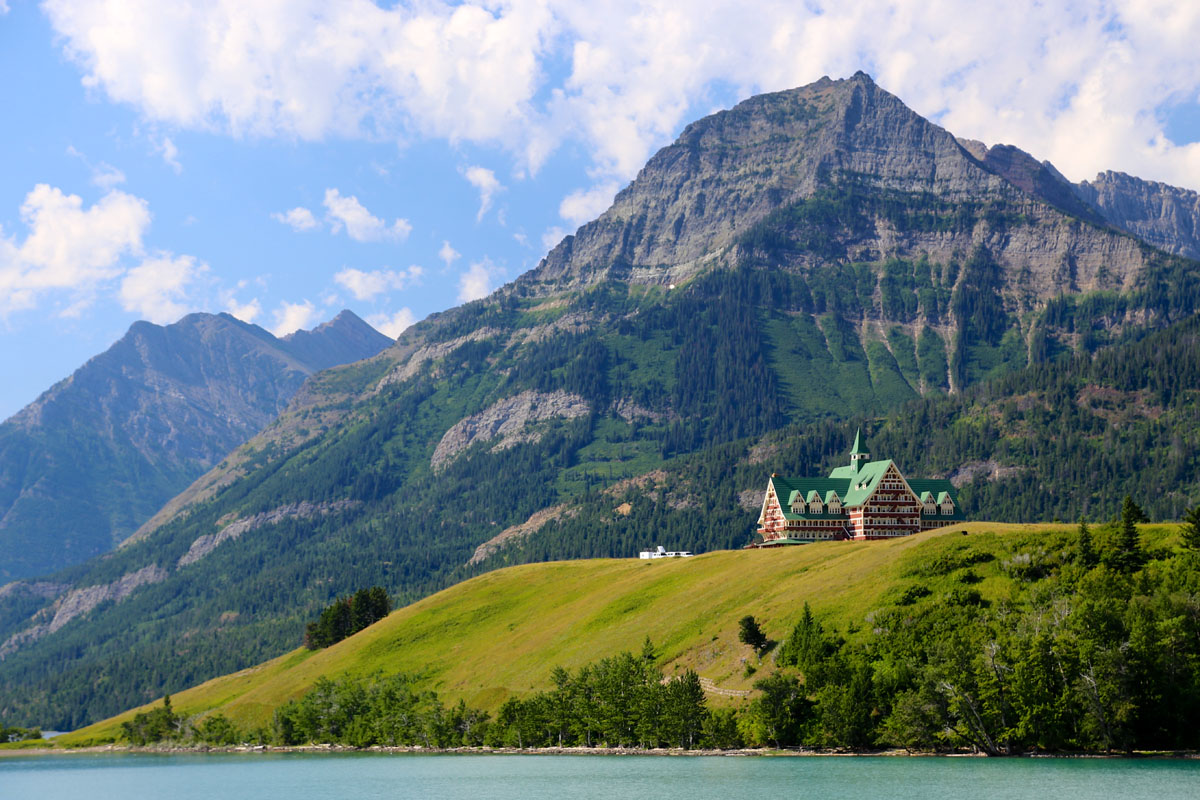 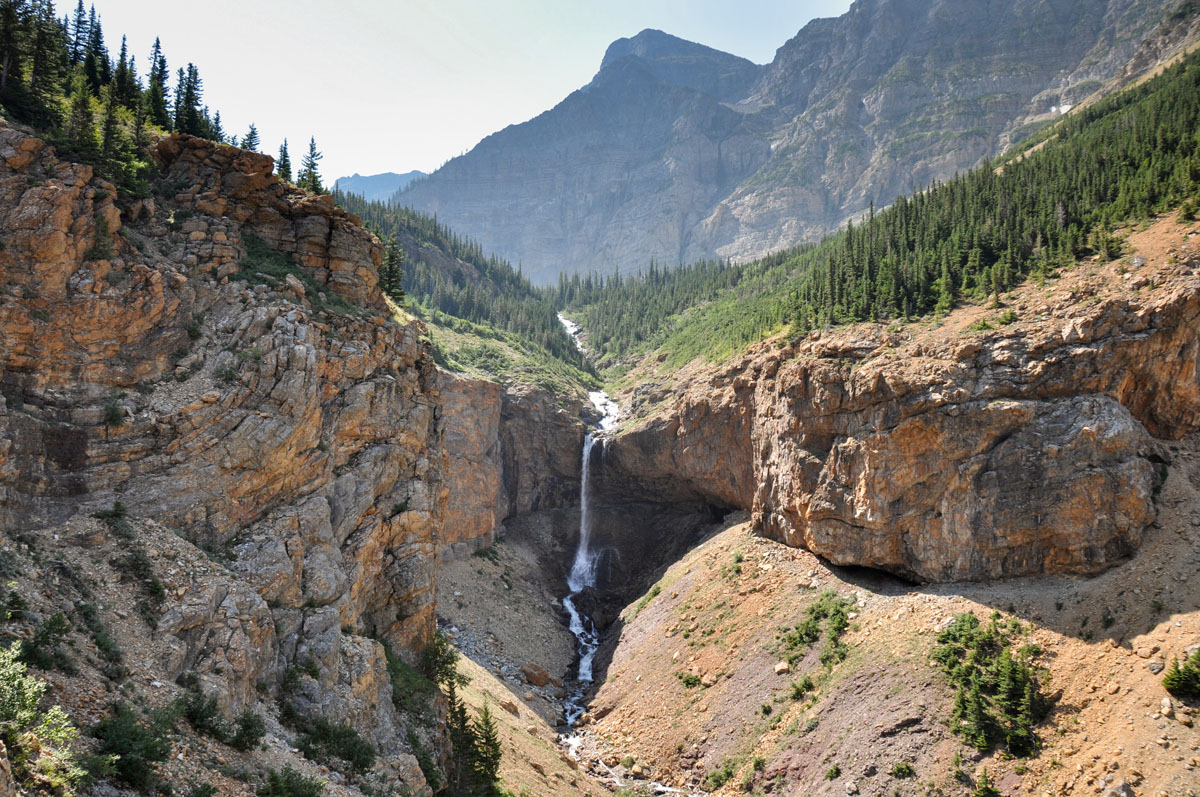