The Henry’s Lake Mountains are a small range located along the Continental Divide in the US states of Idaho and Montana. There are 7 named peaks in the range, the highest and most prominent of which is Sheep Mountain at 10,338 ft (3,151 m) in elevation. 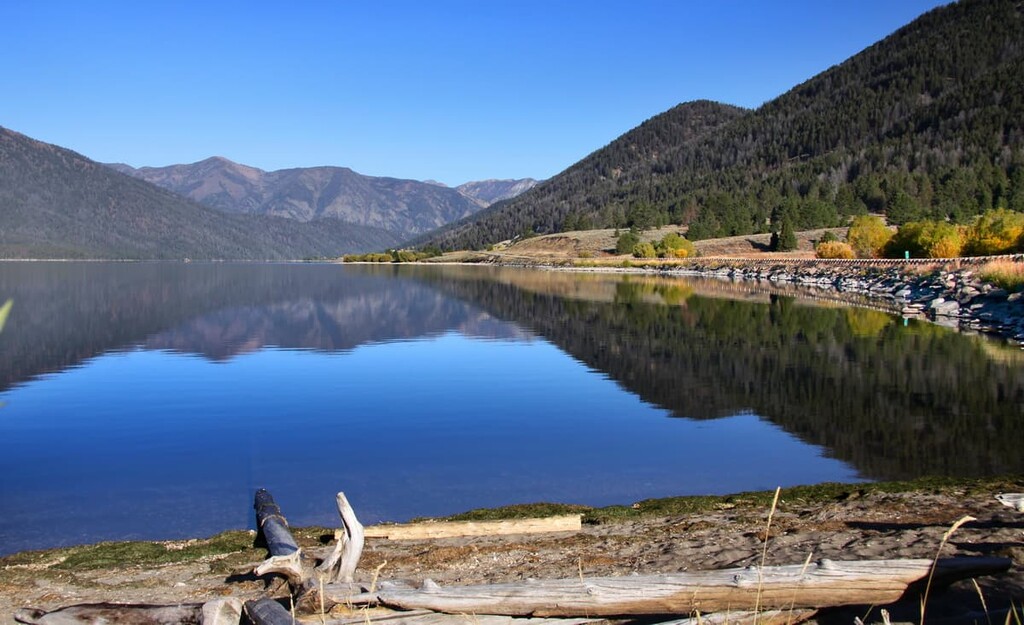 The Henry’s Lake Mountains, sometimes called the Lionhead Mountains, are located at the far eastern edge of the Idaho/Montana border, just west of Yellowstone National Park in Wyoming. They form the southern end of the Madison Range and they are nestled in a highly mountainous area of the Greater Yellowstone Rockies.

The mountains cover an area of about 200 square miles (520 sq. km) between Montana Highway 87 and US Route 287, to the southeast of Hebgen Lake and to the north of Henry’s Lake.

The range is about 25 miles (40 km) long north to south and 20 miles (32 km) wide from east to west. The northern edge of the range is bounded by Quake Lake, which was created by the Hebgen Earthquake in 1959.

This is a mountainous area with high-alpine topography. Of the 7 mountains in the range, 4 reach over 10,000 ft (3,048 m) in elevation. There are nine subalpine lakes scattered between the peaks, too.

About 32,000 acres (13,000 ha) in the core of the Henry’s Lake Mountains are completely free of roads, and a large portion of the area has been recommended for wilderness designation. Most of the mountains are within the Custer-Gallatin National Forest. A small part at the southern end of the range is within the bounds of the Targhee National Forest.

There are numerous hiking trails throughout the Henry’s Lake Mountains, including a 25 mile (40 km) section of the Continental Divide Trail and numerous shorter trails. The alpine lakes are popular hiking destinations.

From the high peaks of the Henry’s Lake Mountains, you can see the Gallatin, Madison, and Teton Mountains. This is the heart of the Rockies and the hiking opportunities here are nearly endless. Red Rock Lakes National Wildlife Refuge, Yellowstone National Park, and Grand Teton National Park are all less than 100 miles (160 km) away.

The Henry’s Lake Mountains are part of the Madison Range, which itself is part of the Greater Yellowstone Rocky Mountain region.

The Rockies run 3,000 miles (4,800 km) from British Columbia in Canada in the north all the way to New Mexico in the US to the south, but each subrange has its own unique history and geological characteristics. The Greater Yellowstone area is one of the most geologically complex and seismically active zones in the Rockies.

The Henry’s Lake Mountains were first uplifted by the Laramide orogeny, approximately 60 to 80 million years ago. Displacement of the Madison Fault, which lies along the west and southwest edge of the range, helped separate the mountains from the lower sedimentary and volcanic rocks in the Henry’s Lake Basin.

The bedrock in the Henry’s Lake Mountains is largely metamorphic rock, overlain with sandstone and Yellowstone volcanic rocks, including rhyolite and basalt. This stratification has created instability in the rocks and soils here, which in turn has contributed to landslides, the largest of which took place in 1959.

The Henry’s Lake Mountains are covered by dense forests of mostly coniferous trees. Some of the most common in the area are douglas fir, lodgepole pine, Engelmann spruce, and whitebark pine. At higher elevations, the ridgelines and mountain peaks are open and covered in rolling tundra and grassy meadows, which bloom with dozens of wildflowers in the spring and summer.

The dense forests and high tundra areas make an excellent habitat for large animals, including grizzly bears, bighorn sheep, and elk. The area is particularly well known for grizzlies and hikers are encouraged to carry bear spray at all times.

The two main lakes in the area, Henry’s Lake and Hebgen Lake, are major fishing destinations. Henry’s Lake is home to brook, cutthroat, and cut-bow hybrid trout, while Hebgen Lake is known for its extra-large rainbow and brown trout.

There are over 4,000 birds in the area just around Henry’s Lake, including trumpeter swans, coots, pelicans, grebes, cormorants, eagles, ospreys, and dozens of species of ducks. Other notable birds in the area include greater sage grouse and many species of raptors, including peregrine falcons, northern harriers, and Swainson’s hawks.

Human habitation in the area around the Henry’s Lake Mountains dates back at least 11,000 years, and numerous Indigenous communities have lived in or passed through the area during that time. There are 27 tribal nations and communities that have connections to what’s now called Yellowstone National Park. There are also over 1,800 archaeological sites in the park itself.

Before the arrival of Euro-Americans, the most prominent group in these high-mountain areas was the Tukudika, a band of Mountain Shoshone. Their traditional lands include parts of northwestern Wyoming, southwestern Montana, and eastern Idaho.

The Tukudika people traditionally lived in semi-nomadic groups, moving around throughout the seasons. The name “Tukudika” translates to “Sheepeater,” which refers to the group’s main food source, the bighorn sheep. However, some descendents of the Tukudika prefer the term “Mountain People” to emphasize their place of origin rather than food source.

In contrast to many Indigenous communities in the region who favored valleys and plains, the Tukudika made their living at least part of the year in high mountain areas. Tukudika villages have been found at over 10,000 ft (3,050 m) of elevation in the Wind River Range in Wyoming.

European-Americans first began to arrive in the area in the early 1800s, and by the middle of the century, increasing numbers of settlers were putting pressure on Indigenous communities to move off their homelands. In fact, the Nez Perce Chief Joseph passed through Henry’s Lake in 1877 during the Nez Perce War, in which his tribe fought and evaded the US Army for over 1,000 miles (1,600 km).

At first, the Tukudika retreated deeper into high mountain territory to escape violence from settlers and neighboring tribes, but by 1900, they had all been forcibly removed to reservations.

In 1899, the Custer-Gallatin National Forest was created, preserving most of the Henry’s Lake Mountains. In the early twentieth century, dams were built on the Madison River and Henry’s Lake, which created Hebgen Lake and significantly widened Henry’s Lake.

The landscape around Hebgen Lake changed significantly in 1959, when an earthquake registering 7.2 on the moment magnitude scale struck southeastern Montana, causing millions of dollars in damage and killing 28 people.

An 80-million-ton (81 billion kg) landslide cut off the Madison River near Lake Hebgen, forming Quake Lake at the northern end of the range. Since then, the Forest Service has built a memorial for the victims of the earthquake and a visitor’s center with exhibits dedicated to the geology and seismology of the region.

There are lots of great hiking trails in the Henry’s Lake Mountains. While the area gets lots of visitors, it’s not as busy as nearby Yellowstone National Park, so it’s a good place to get away from the crowds.

The Continental Divide Trail, which runs 3,000 miles (4,800 km) through the Rockies from Mexico to Canada, passes through the Henry’s Lake Mountains. This section runs for about 25 miles (40 km) and parallels the Idaho/Montana border.

The easiest way to access the trail is from Targhee Pass on Route 20. Near the Idaho/Montana border, turn onto the dirt road that leads north from the highway and follow it for 0.25 miles (400 m) to the parking area.

From here, you’ll hike along an old access road, then turn left at the Continental Divide Trail (CDT) sign. The single track trail leads up to a beautiful meadow with views over Hebgen Lake, Targhee Peak, Bald Peak, and Yellowstone.

The CDT travels north to Lionhead, then turns west and passes near Bald Peak, Targhee Peak and Black Mountain before exiting the area at Reynold’s Pass. The roundtrip hike from Targhee Pass to Lionhead on the CDT is 13.1 miles (21 km) with 2,985 ft (910 m) of elevation gain.

The Sheep Creek Trail starts from the northern end of the Henry’s Lake Mountains off Highway 87. It climbs alongside Sheep Creek to the beautiful high alpine Sheep Lake, with amazing views towards Sheep Mountain and Coffin Mountain. Horses and mountain bikes are allowed on this trail.

The Coffin Lakes Trail is one of the most popular in the Henry’s Lake Mountains. It leads to two beautiful alpine lakes that sit just below Coffin Mountain.

The trail begins at the end of Denny Creek Road, which runs along the western shore of Lake Hebgen. This is a moderate trail with steady but gentle elevation gain for the entire time. It’s a great day hike that will take you into the heart of the Henry’s Lake Mountains with minimal effort.

Looking for a place to stay near the Henry’s Lake Mountains, here are some of the best cities and towns to check out:

The closest town to the Henry’s Lake Mountains is West Yellowstone, which serves as a gateway to nearby Yellowstone National Park and the nearly endless outdoor opportunities in the area.

The town is only home to about 1,000 people, but tourism is the primary industry here, so you’ll find plenty of hotels, restaurants and shops. West Yellowstone makes a great base for exploring both the national park and the Custer-Gallatin National Forest.

Located about 100 miles (160 km) south of Henry’s Lake on Highway 20, Idaho Falls is one of the closest major towns to the Henry’s Lake Mountains. The town is situated on the Snake River Plain between Craters of the Moon National Monument and Grand Teton National Park.

About 60,000 people live in Idaho Falls, making it one of the larger towns in the area. Visitors can enjoy the shops and restaurants downtown, along with a zoo and urban trail system along the Snake River.

If you’re looking to explore the Custer-Gallatin National Forest north of the Henry’s Lake Mountains, Bozeman makes for a good homebase. The town of 45,000 is bordered by the Bridger Mountains, while the Madison, Gallatin, and Absaroka ranges lie directly to the south.

Bozeman is home to Montana State University, so there are plenty of bars and distilleries in town, too. Two ski areas, Bridger Bowl and Big Sky Resort, are also located nearby.