Boasting some of the most spectacular hiking and scrambling opportunities in all of Idaho, the Pioneer Mountains are a rugged and stunning mountain range that’s not to be missed. The range contains 51 named mountains, the highest and most prominent of which is Hyndman Peak (11,906ft/3,629m). 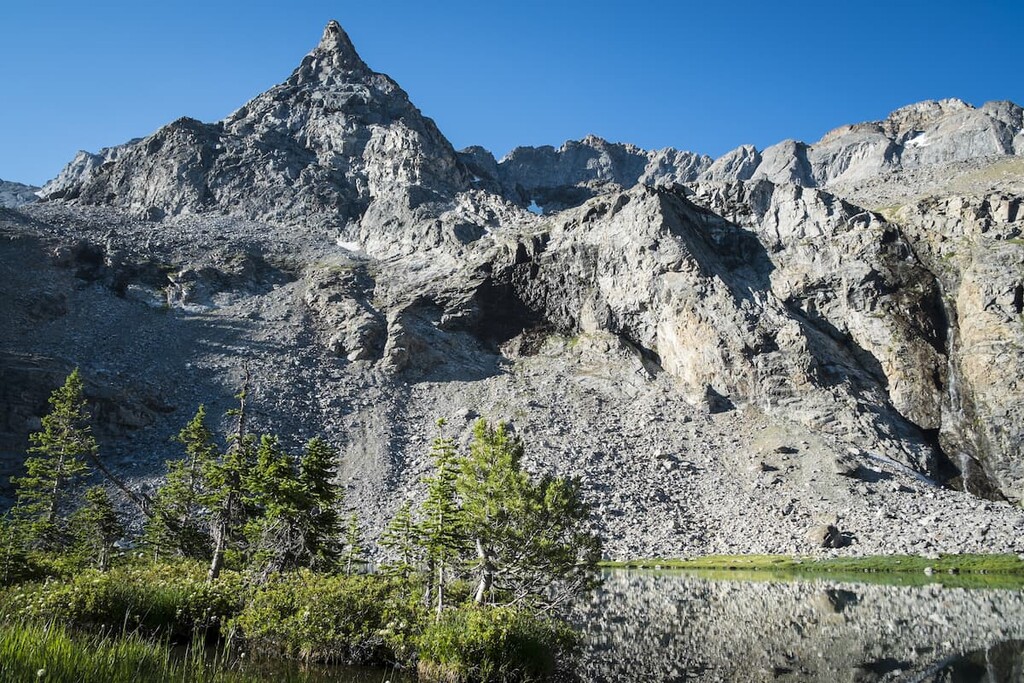 The Pioneer Mountains (not to be confused with the West Pioneer Mountains of Montana) are a modestly-sized collection of peaks located in the central part of the US state of Idaho. Located within Blaine, Butte, and Custer counties, the range extends for some 18 miles (29 km) from a north to south direction and about 20 miles (32 km) from east to west.

Due to their location within the heart of Idaho, the Pioneer Mountains are surrounded on nearly all sides by other mountain ranges. In particular, they are located to the west of the White Knob Mountains and the Lost River Range as well as to the south and east of the Boulder Mountains and the Smoky Mountains.

Furthermore, the range is situated to the north of the vast Snake River Plain. In fact, much of the southern part of the Pioneer Mountains consists of rolling foothills that gradually descend to the river plain below.

Geologically, the Pioneer Mountains are part of the vast Idaho-Bitterroot Rocky Mountains, which cover much of central and northern Idaho, as well as parts of western Montana.

The Idaho-Bitterroot Rockies are also part of the much larger Rocky Mountains, which is a network of mountain chains that extends from the northern part of the US state of New Mexico all the way north to the province of British Columbia in Canada.

More specifically, the Pioneer Mountains are underlain by a diverse core of rocks, which consists of genesis, folded metasedimentary strata, and some igneous intrusions.

In the more recent geologic past, the Pioneer Mountains were also heavily glaciated. This glaciation led to the creation of a number of major geological formations, including massive cirques, glacial lakes, and U-shaped valleys.

The Pioneer Mountains are located along an interesting transition zone between the hot and low-lying Snake River Plain to the south and the Idaho-Bitterroot Rocky Mountains to the north. As a result, they are home to an interesting array of ecosystems and climatic zones, which include everything from sagebrush at lower elevations and forests and the mist-elevations.

The lowest elevations of the range are dominated by sagebrush prairie, which are vital to the region’s agricultural industry.

However, substantial portions of the range are part of the Idaho Batholith Ecoregion, which is highly forested. These forests contain everything from Douglas fir to aspen, limber pine, and ponderosa pine.

Wildlife is also abundant in the region. Major species that can be found in the Pioneer Mountains include mountain lions, black bears, mule deer, mountain goats, bobcats, coyotes, moose, and pronghorn.

The region in and around the Pioneer Mountains has been home to humans for thousands of years. Indeed, the region is part of the traditional homelands of many peoples, including the Shoshone-Bannock Tribes and the Eastern Shoshone Tribe.

People of European descent perhaps first came to the region in the early part of the nineteenth century. These people were likely fur trappers and traders who came in search of new economic opportunities.

By the 1860s, the region was a major thoroughfare for travelers making their way north from Utah on the Montana Trail during the height of the Montana Gold Rush. Even after the gold rush died down, settlers dispersed throughout the lower-lying areas of the region near the Snake River Plain in order to start their own homesteads.

During the 1880s, the region near what is now Ketchum became a center for smelting as mining operations in the area became a major source of economic prosperity. This mining boom eventually subsided, however, by the 1890s.

Afterward, the Pioneer Mountains became a fairly popular place for shephards to graze their flocks. As a result, Ketchum reinvented itself as a major sheep-shipping center. This status was elevated by the construction of the Union Pacific Railroad, which connected Sun Valley to the city of Shoshone.

During the 1930s, the railroad also allowed Ketchum to become a popular destination for outdoor recreation. The region became increasingly popular among celebrities, including Ernest Hemingway who committed suicide in his home in the region.

On the other side of the range, in Arco, the Pioneer Mountains also became the site of some of the earliest developments in nuclear energy. In fact, in 1955, Arco became the world’s first-ever town to have its electricity generated solely by nuclear power (though this event was short-lived and lasted only 1 hour).

Nowadays, the Pioneer Mountains remain one of Idaho’s premier outdoor recreation destinations. Although they are usurped by the nearby Lost River Range in terms of height, the Pioneers are home to exceptionally high-quality rock, beautiful vistas, and glistening alpine lakes. What’s not to love?

The tallest point in the Pioneers and the ninth-highest in the state, Hyndman Peak is a must-do for the most intrepid among us. Hyndman can be accessed via a 12 mile (19.3 km) out-and-back hike which gains about 5,000 ft (1,520 m) of elevation.

Starting off from a trailhead off of Highway 75, this hike immediately starts meandering its way uphill. Eventually, you get views of Wild Horse Canyon and from there, you’ll enjoy a long scramble to the summit where excellent vistas await.

Another popular summit for intrepid hikers, the trek to Pyramid Peak is a great option if you’re looking for a shorter hike. The trail is about 5.8 miles (9.3 km) long and it offers a chance to see both Upper and Lower Ball lakes.

This hike follows along a well-maintained and heavily-travelled trail and it doesn’t involve as much scrambling as the trek to Hyndman Peak. So, it’s a nice option for a wide range of different hikers.

One of the most scenic areas in central Idaho, the Pioneer Cabin Loop should be at the top of your to-do list. This hike covers about 8.5 miles (13.7 km) so it’s a nice option for either a day hike or a short overnight trip.

To start your hike, you’ll begin at the Pioneer Cabin Trailhead and continue steadily upward until you pop out above the treeline. From here, you’ll continue up switchbacks to a scree field, which is your last obstacle before reaching this historic cabin.

As of the writing of this article, the cabin was open on a first-come, first-served basis for overnight stays. However, this could change at any time, or the cabin could be occupied, so be sure to bring a tent as a back-up if you’re planning an overnight trip.

Looking for a place to stay during your trip to the Pioneer Mountains? Here are some of the best cities and towns to check out:

The towns of Ketchum and Sun Valley are located in the western part of the Pioneer Mountains along Highway 75. Both towns are known for their fantastic skiing opportunities, thanks to the nearby Sun Valley Resort, and there are about 4,500 people who live between the two towns.

The small town of Arco is situated just to the east of the Pioneer Mountains. It has about 1,000 residents and it is the county seat of Butte County. It is also the home of part of the massive Idaho National Laboratory (INL), which is one of the major employers in the region. The town also has a campground and fantastic access to the nearby Craters of the Moon National Monument.

One of the largest cities in Idaho outside of the Boise area, Idaho Falls is home to some 60,000 residents. The city is located to the east of the Pioneer Mountains on the opposite side of the Snake River Plain, but is well within driving distance for a daytrip.

Idaho Falls is the commercial and cultural hub of eastern Idaho and some parts of western Wyoming. Its location along I-15 and its regional airport also make it a travel hub for the region. 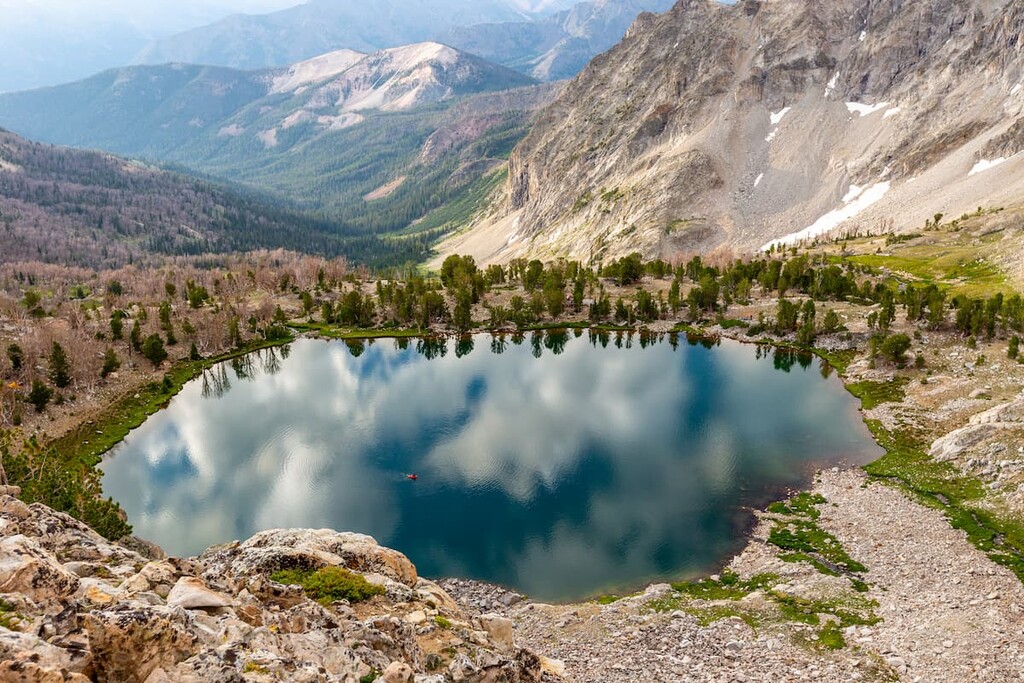 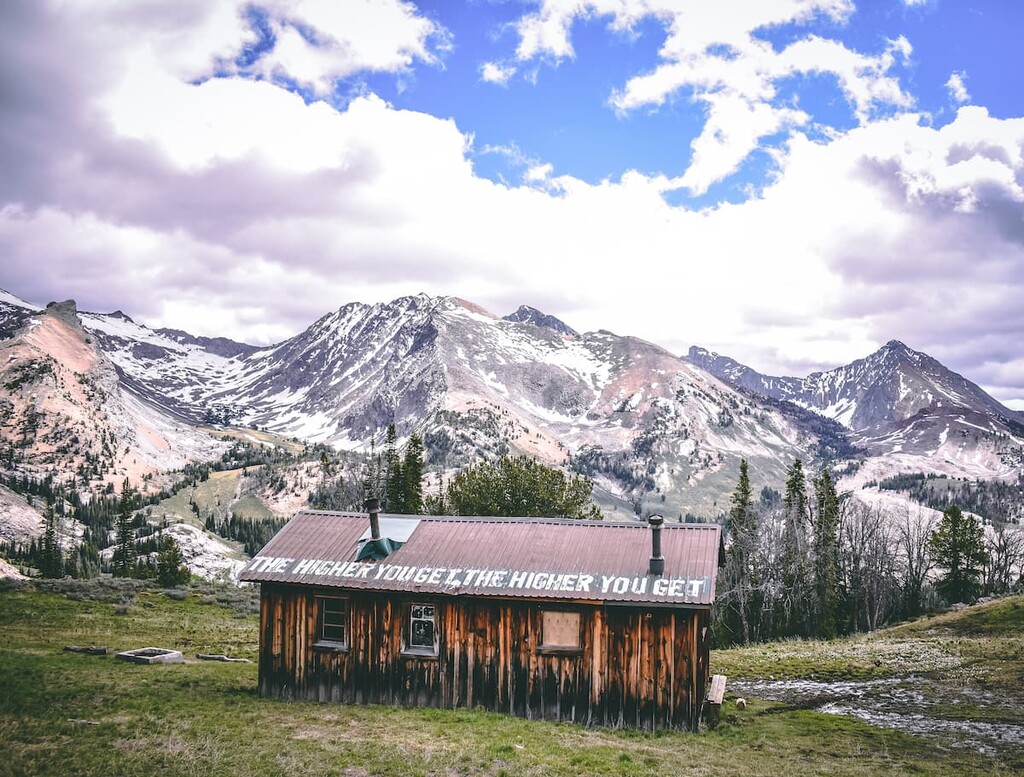 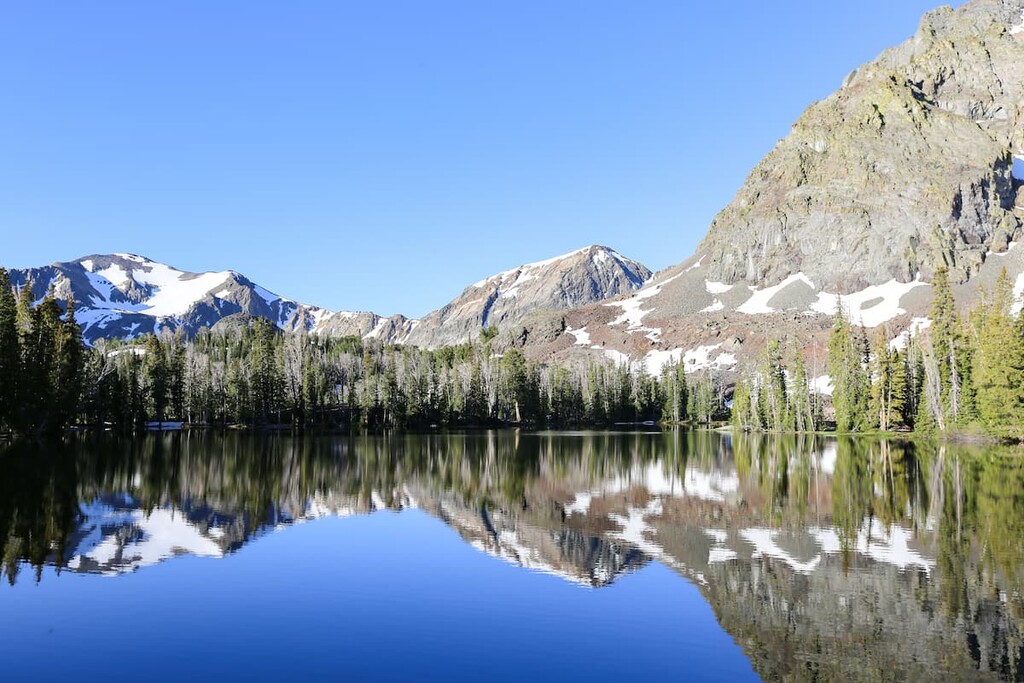 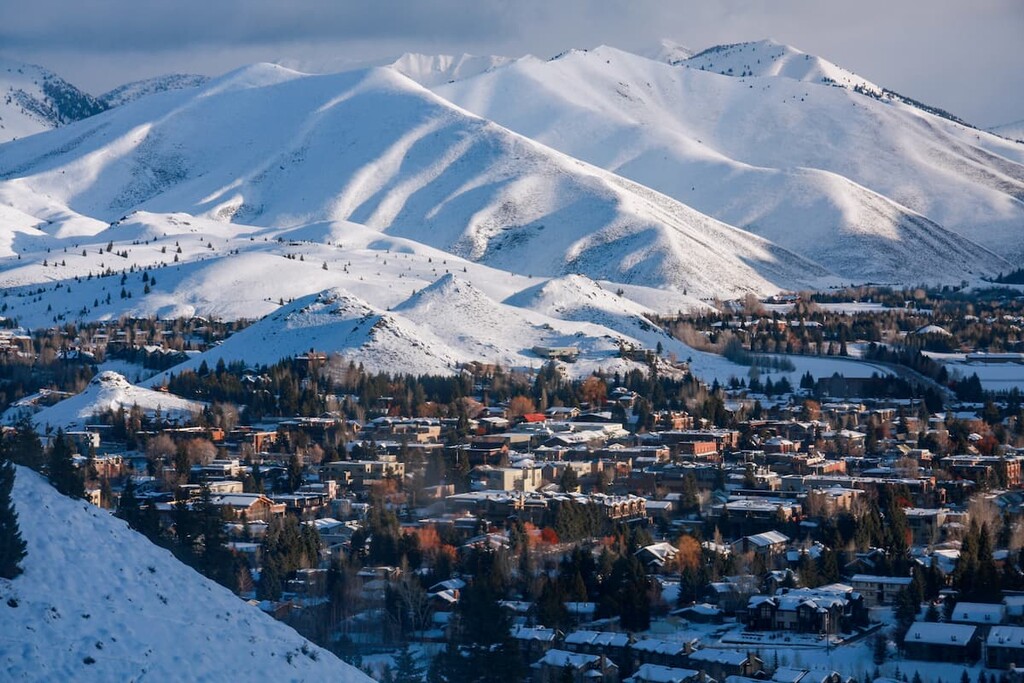 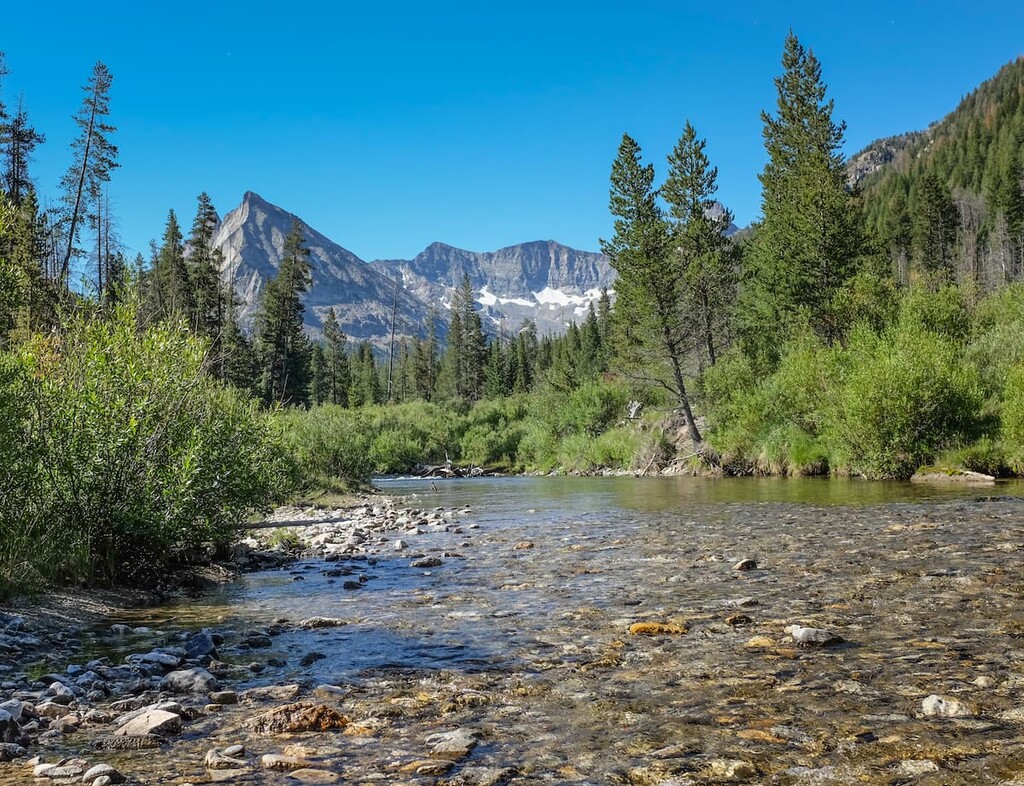 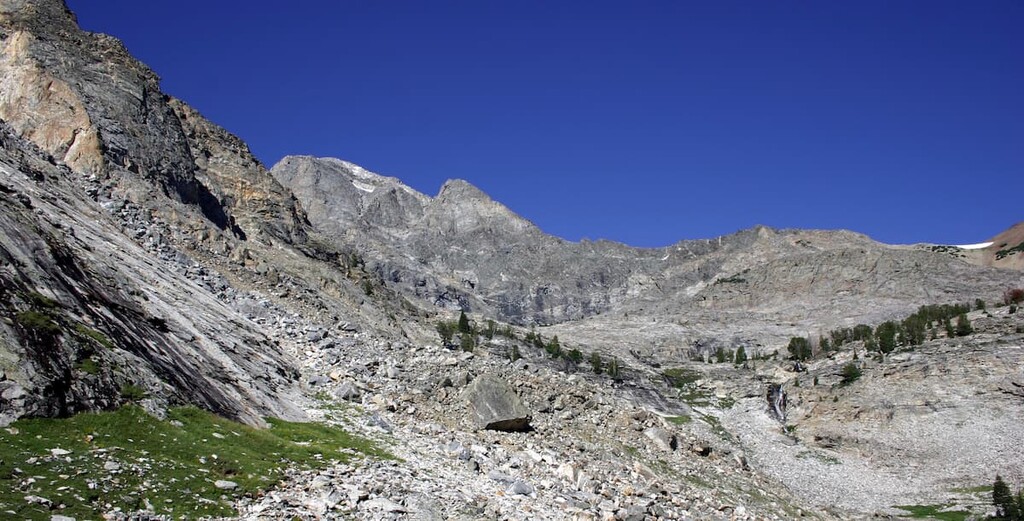