Featuring narrow canyons, sprawling mesas, and dense canyons, the Pecos Wilderness is a large federally protected area located in the north-central part of the US state of New Mexico. The wilderness contains 33 named mountains, the highest and most prominent of which is Truchas Peak (13,091 ft/3,990 m). 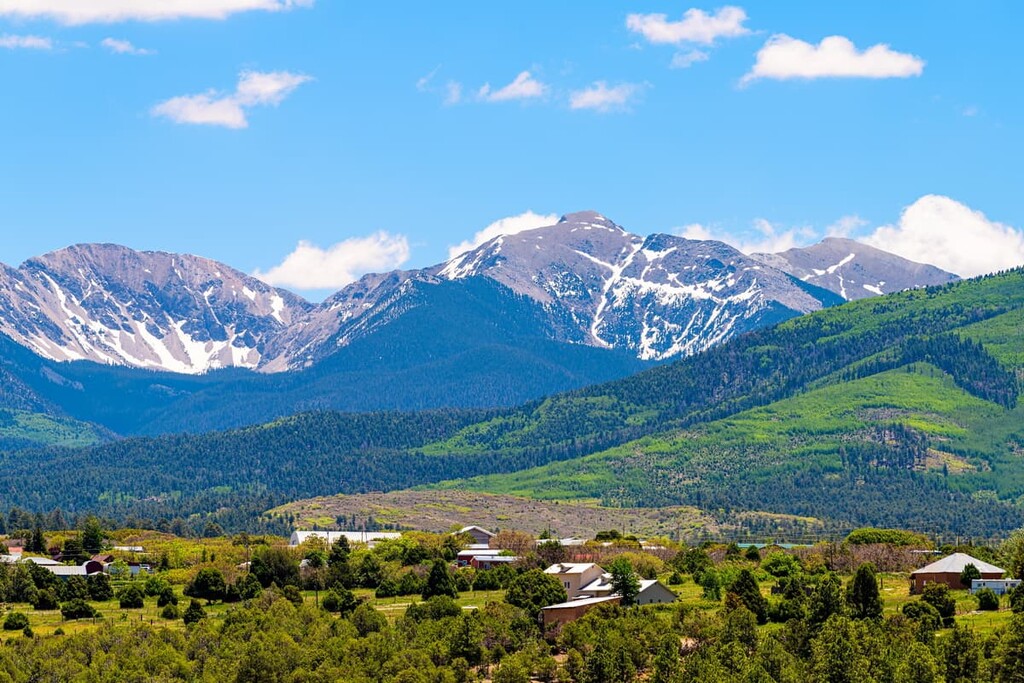 It contains a total area of 223,667 acres (90,514 ha) in Santa Fe County just outside the city of Santa Fe. This makes it the second largest wilderness in New Mexico after the Gila Wilderness in the Gila National Forest.

Furthermore, the Pecos Wilderness is located in close proximity to a large number of other areas of protected land. In particular, the wilderness is located to the south of a large swath of land in the Carson National Forest and within driving distance of the Wheeler Peak, Cruces Basin, Latir Peak, and Columbine-Hondo wilderness areas.

Within the Pecos Wilderness, the landscape is dominated by staggering peaks of the Sangre de Cristo Range as well as deep valleys that separate some of the region’s largest mesas. The Pecos River, which is a National Wild and Scenic River and a tributary of the Rio Grande, also flows through the wilderness.

Additionally, the wilderness contains fifteen lakes and more than 150 miles (240 km) of rivers and streams. This makes it the perfect habitat for a range of different aquatic species, including various types of trout.

The mountains within the Pecos Wilderness are a part of the Sangre de Cristo Range, which is a subrange of the greater Southern Rocky Mountains.

Within the range, there are a number of different rock types, including Precambrian metamorphic rocks and substantially younger sedimentary rocks. Some of the many rocks found in and around the Pecos Wilderness include gneisses, granites, schists, quartzites, and amphibolites.

The Pecos Wilderness is particularly well known for its diversity of ecosystems and the superb array of flora and fauna that can be found within its borders.

At low to mid elevations in the wilderness, the landscape is mostly dominated by dense forests. These forests are home to a slew of different tree species including Engelmann spruce, limber pine, bristlecone pine, white fir, Douglas fir, corkbark fir, ponderosa pine, and aspen. Wildflower meadows are also common at higher elevations.

As far as wildlife goes, the Pecos Wilderness is a true haven for a plethora of species. Some of the many mammals found in the wilderness include black bears, elk, mule deer, coyotes, bobcats, mountain lions, and beavers. The wilderness is also home to one of the largest herds of Rocky Mountain bighorn sheep in the region.

Furthermore, the Pecos Wilderness’ many waterways make it a particularly great place to find a number of different fish species. Some of the most notable species of fish in the wilderness include brown trout, rainbow trout, and the elusive Rio Grande cutthroat trout.

Humans have lived in the area in and around what is now the Pecos Wilderness for countless generations. The land is the traditional territory of many Indigenous peoples, including the Jicarilla Apache Nation and many Puebloans, including the Ohkay Owingeh Pueblo, Picuris Pueblo, Santa Clara Pueblo, San Ildefonso Pueblo, Pueblo of Pojoaque, Tesuque Pueblo, and Nambe Pueblo, among others.

The city of Santa Fe, which is located just to the southwest of the Pecos Wilderness, was established in 1607 by Pedro de Peralta. In 1680, the Pueblo Revolt caused many of the Spanish colonizers to leave the region, though they returned not long afterward.

For nearly 150 years afterward, the region was administered by the Spanish as part of New Spain. It became the territory of Mexico in the 1820s after the Mexican War of Independence and it was later ceded to the United States as part of the Treaty of Guadalupe Hidalgo after the Mexican-American War in 1848.

During the 1870s, the region became a popular destination for gold and mineral prospectors. The Pecos River was an exciting place for gold prospectors as it was the source of a decent amount of placer gold.

The Pecos Wilderness is home to more than 400 miles (643 km) of hiking trails. Here are some of the top hikes to consider during your next visit to the wilderness:

The Winsor Trail (more formally known as the Winsor National Recreation Trail or Trail #254) is a 9 mile (14.4 km) long hiking trail that’s often considered to be one of the premier treks in the Pecos wilderness.

Although there is a way to approach the massif from the west, this is generally not recommended due to vandalism issues at some of the trailheads, including Quemado Creek. Other approaches include the southern approach from Jack’s Creek Campground and the northern approach from Santa Barbara Campground.

Again, keep in mind that the Truchas Peaks massif is seldom visited except by keen peak baggers. So, solid route-finding skills are a must if you plan to trek to the summit of any of the Truchas Peaks.

The Pecos Baldy Lake Trail is one of the most popular in the wilderness area. This 7.6 mile (12.2 km) hike to Pecos Baldy provides stunning vistas and a chance to see some of the region’s best wildflower meadows.

The trail starts at Jack’s Creek Campground and then travels steadily upward into the alpine. Keep in mind that snow is usually present on this trail until mid-summer. Eventually, you’ll arrive at the lake itself, where you can go for a swim or simply keep an eye out for bighorn sheep. Also do note that camping is not allowed in the lake basin, but there are camping spots nearby.

Looking for a place to stay near the Pecos Wilderness? Here are some of the best cities and towns to check out:

The fourth largest city in New Mexico, Santa Fe is a community of about 90,000 residents that’s located just to the southwest of the Pecos Wilderness. Santa Fe is particularly famous for its exceptional array of historic buildings and art galleries, which make it a great place to visit if you’re in the region.

Additionally, Santa Fe is located within driving distance of some of the best outdoor recreation destinations in New Mexico. It is just a short drive to the Taos Valley, which offers super hiking, skiing, and fishing opportunities.

Located to the northwest of the Pecos Wilderness, the community of Española is home to approximately 11,000 people who live at the meeting point of the Rio Grande, Rio Santa Cruz, and the Rio Chama.

Española is the home to the Los Alamos National Laboratory, which is the largest employer in the city. It is also known for having a great collection of stores, restaurants and annual festivals, which make it popular among tourists coming from Santa Fe.

Not to be confused with the city of Las Vegas in Nevada, Las Vegas in New Mexico is a city of some 14,000 people who live along the Gallinas River. It became a fairly prosperous city due to its location along the Santa Fe Trail and, later, the railroad.

These days, Las Vegas is known for its railroad-era and Spanish colonial architecture. It was also the filming location for a number of popular films and TV shows, including House of Cards, Criminal Minds, No Country for Old Men, and Longmire.

Home to approximately 12,000 people, the town of Los Alamos is situated on and around a collection of four mesas to the west of the Pecos Wilderness. It is arguably most famous as the location for the Manhattan Project, which developed the atomic bombs used in World War II.

Los Alamos is now one of the fastest-growing communities in New Mexico. Many of the community are employed by the Los Alamos National Laboratory. Furthermore, Los Alamos is a major medical center for the region as it is the site of the Los Alamos Medical Center. 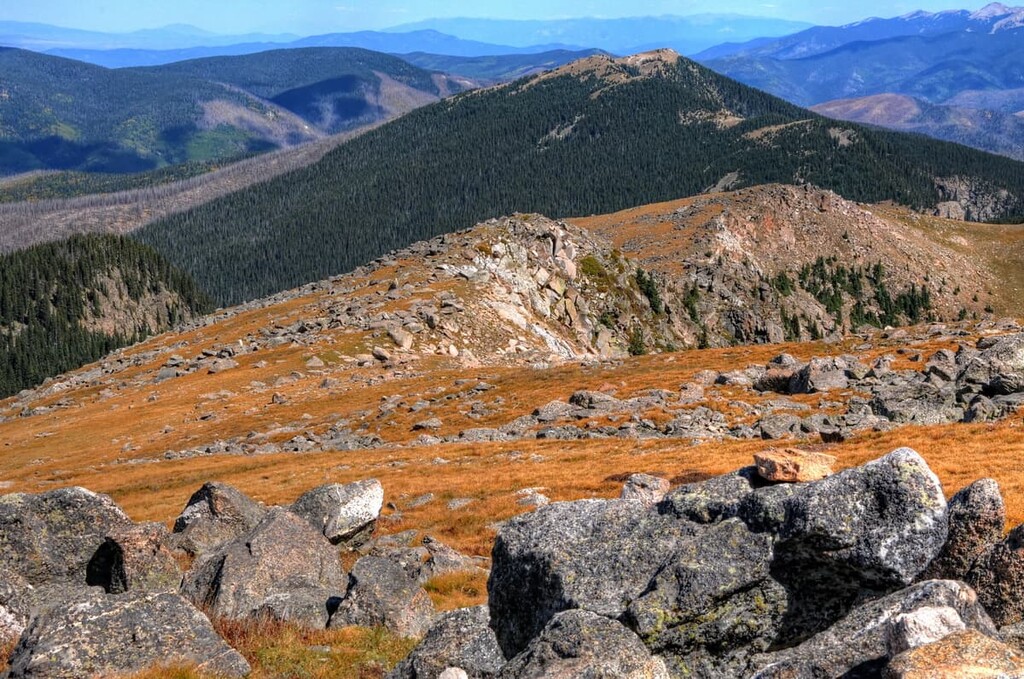 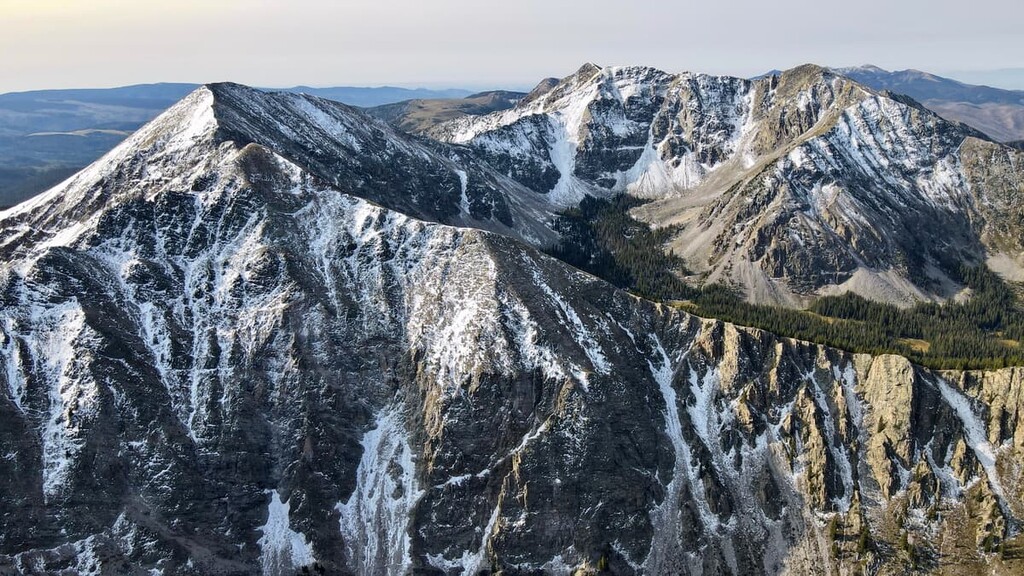 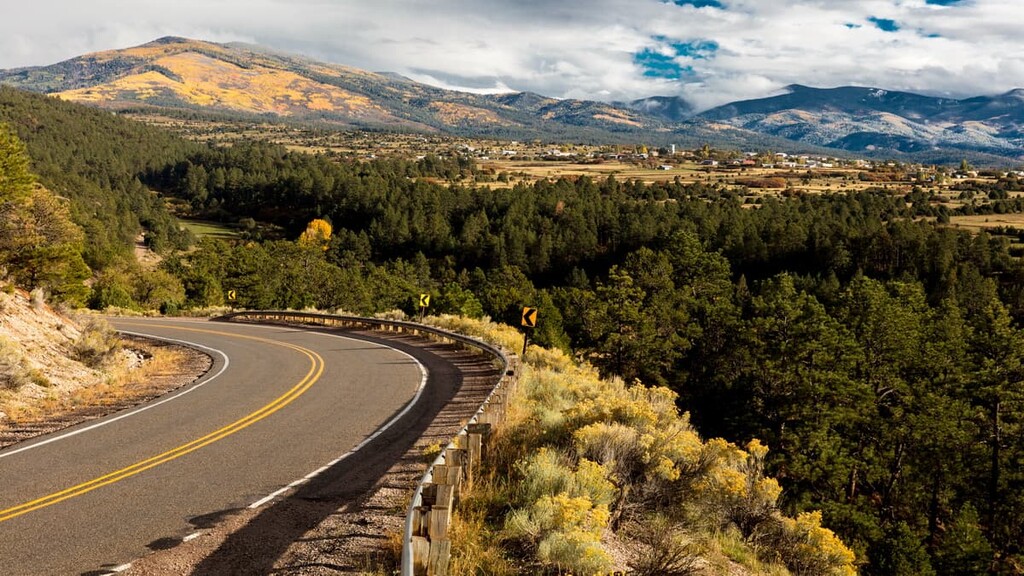 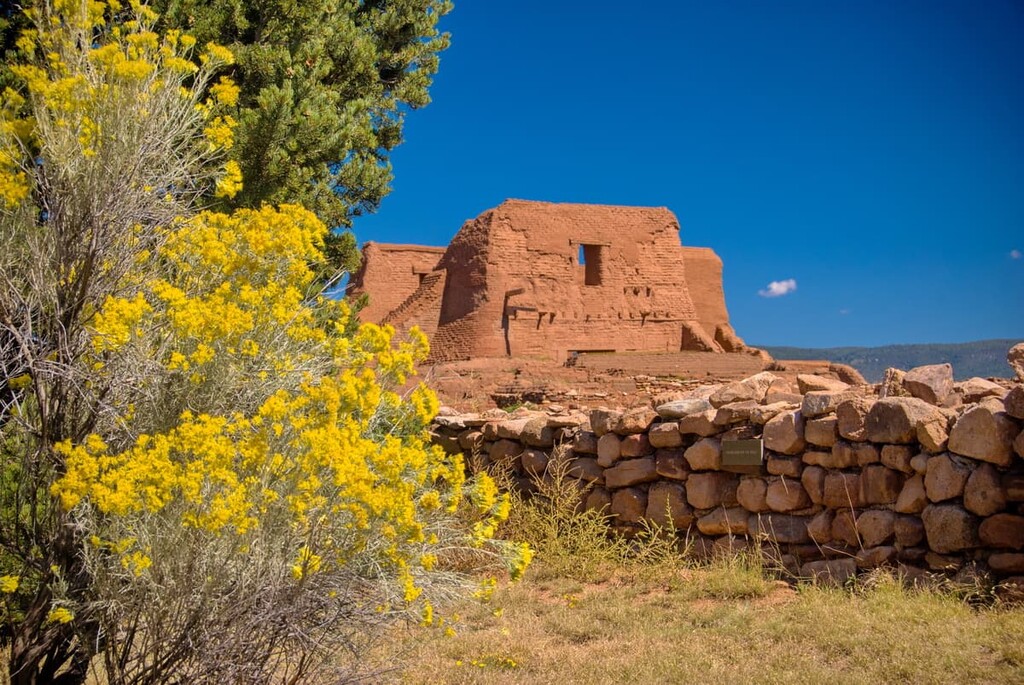 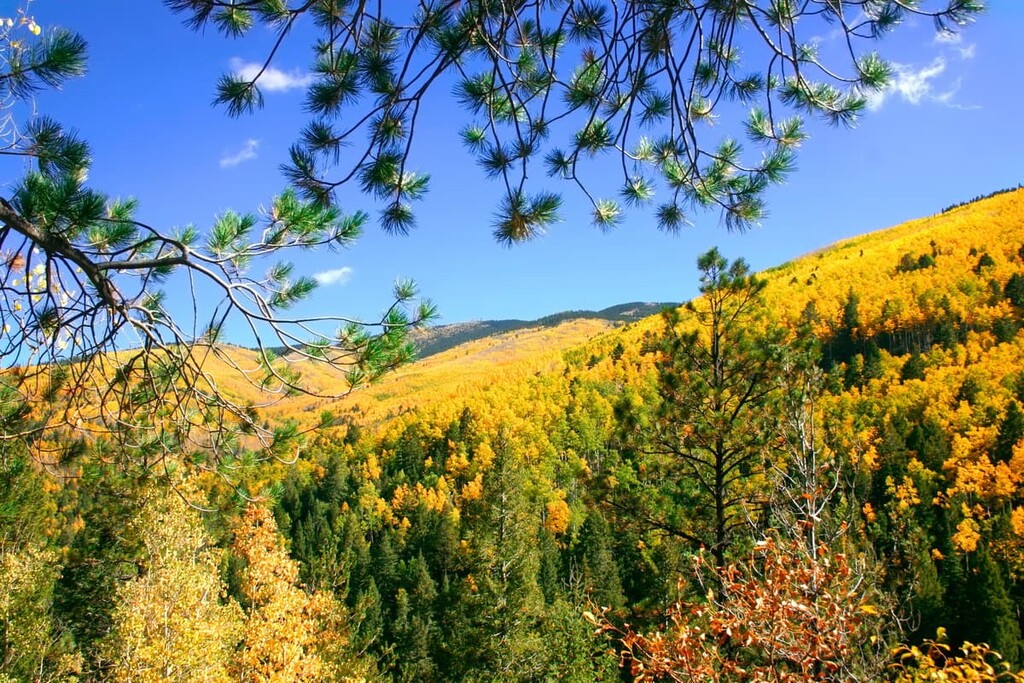 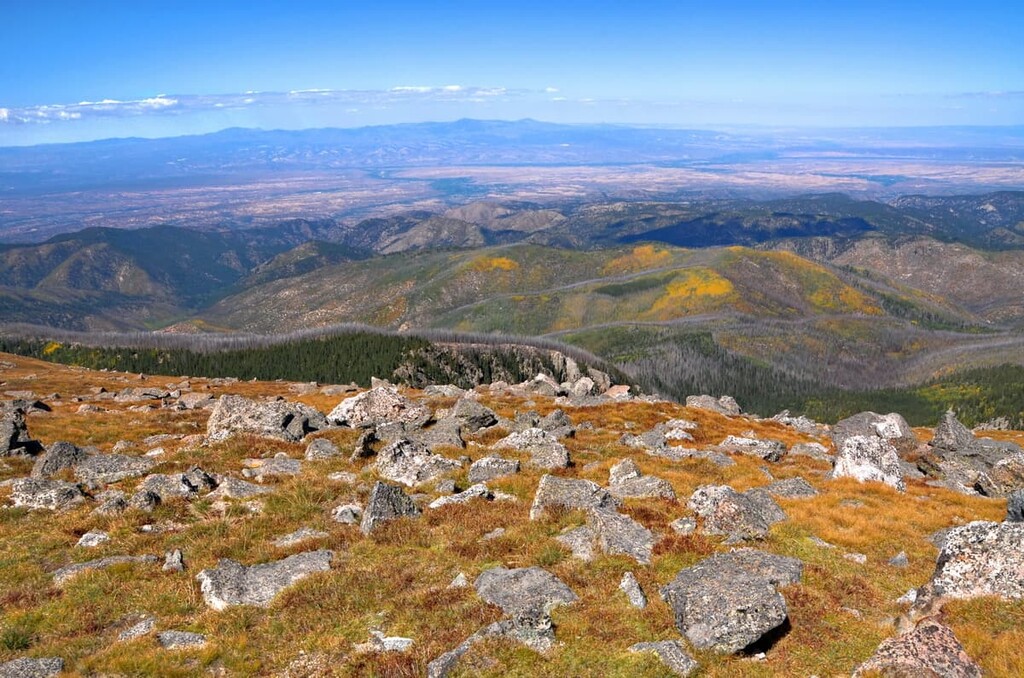 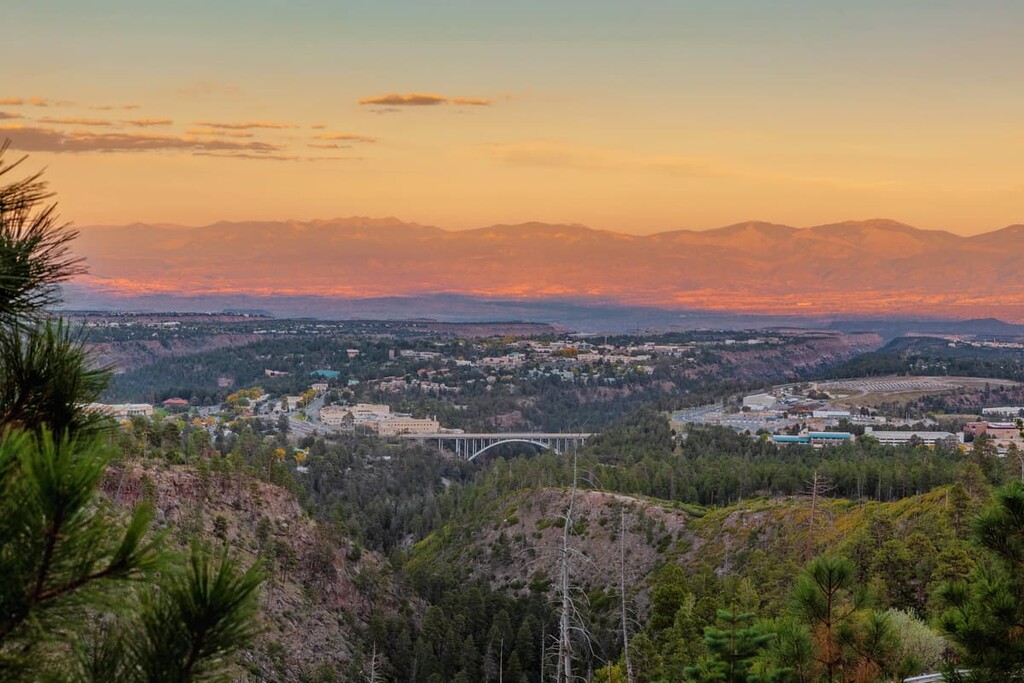