Situated in the north-central region of the US state of New Mexico, Valles Caldera National Preserve is a federally protected area that encompasses a slew of volcanic features, such as hot springs, fumaroles, and lava domes. The preserve contains 23 named mountains, the highest and most prominent of which is Turkey Ridge (11,673 ft/3,558 m). Additionally, the highest peak within the boundaries of the caldera is Redondo Peak (11,266 ft/3,434 m). 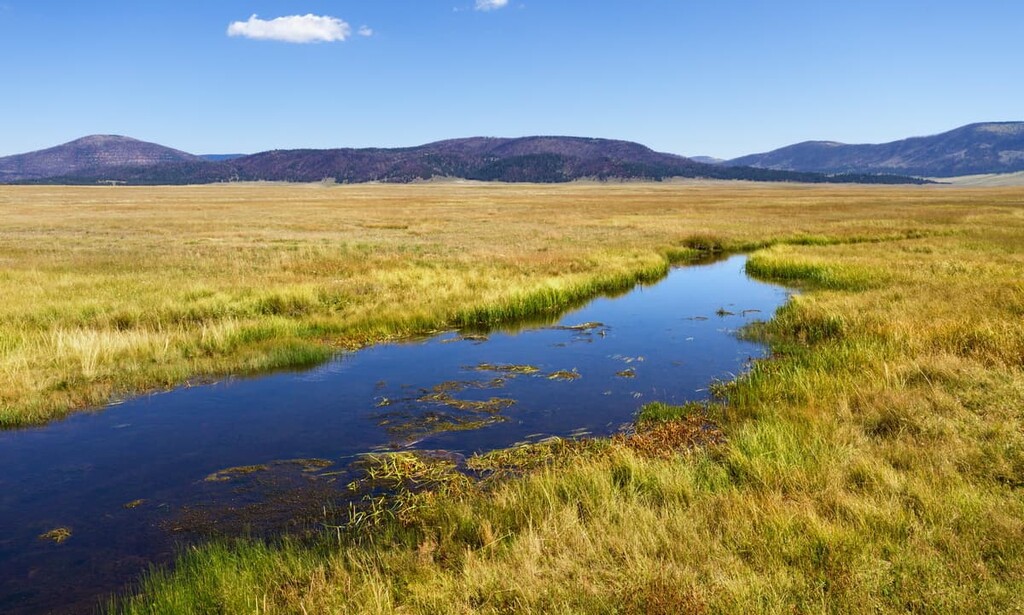 Valles Caldera National Preserve is a unique area of federally managed land located in the north-central part of the US state of New Mexico.

The preserve contains a total of 89,216 acres (36,104 ha) of land in Rio Arriba and Sandoval counties to the west of the town of Los Alamos. It is roughly bounded to the south by New Mexico State Road 126 and on all sides by the Santa Fe National Forest.

Valles Caldera National Preserve is located at the southwestern edge of a large complex of federally protected and managed land in the northern part of New Mexico.

The area of Valles Caldera National Preserve is one of the most geologically interesting places in New Mexico.

As the preserve’s name suggests, it is home to a caldera, which is a large, cauldron-shaped depression in the landscape that occurs after the emptying of the magma chamber of a volcano during an eruption. The caldera at Valles Caldera is approximately 13.7 miles (22 km) in diameter.

The eruption that formed Valles Caldera took place approximately 1.25 million years ago. This makes it the oldest of the three major calderas in the US (the others are Yellowstone in Wyoming and the caldera of Long Valley in California).

Valles Caldera formed as a result of a major volcanic eruption. This eruption also led to the formation of nearly circular faults in the region (usually called ring fractures).

However, the volcanic activity that formed the Valles Caldera is still in effect to this day. There is evidence of continuing volcanism in the southwest part of the preserve where there is also the Valles geothermal system.

The peaks within thet park are also considered to be part of the Jemez Mountains, which is a subrange of the Colorado Plateau that’s located to the northwest of Santa Fe.

In addition to its unique geology, Valles Caldera National Monument is also home to a fantastic array of biodiversity.

The preserve contains a mix of ecosystems, including grasslands at lower elevations. However, much of the original bunch grass has since been defoliated due to the effects of years of overgrazing. These days, grazing is still allowed in the preserve but it is highly regulated by the park service.

Additionally, the preserve is located on land that holds some of the richest ecosystems in the region. It has a mixture of tree species, including Douglas fir, Engelmann spruce, and ponderosa pine that have, for the most part, escaped the effects of overlogging.

The wildlife populations of Valles Caldera are also well worth a mention. A vast number of different species roam throughout the preserve, including coyotes, mountain lions, black bears, prairie dogs, and bobcats. The preserve is also home to the second largest population of elk in New Mexico.

Finally, Valles Caldera is home to dozens of miles of streams that are chock-full of trout. Some waterways, such as the East Fork of the Jemez River and Jaramillo Creek, contain rainbow and brown trout. Fishing is allowed in the preserve, though you need to have a fishing permit from the preserve and a state fishing license. So, plan ahead if you hope to fish during your visit.

Although it’s unclear whether people permanently lived within the caldera itself before the sixteenth century, it’s clear that the region was frequently used for hunting and grazing. In fact, obsidian (a type of rock) from the caldera was frequently traded for use in arrow points.

Some of the first people of European descent to visit the region were Spanish members of the Franciscan mission at San José de los Jemez, which was built to the north of the modern village of Jemez Springs in 1621. However, this mission was abandoned a few decades later and the region has remained highly agricultural ever since.

Although the region was claimed by Spain during the sixteenth through early nineteenth century, the territory became part of Mexico after the Mexican War of Independence. After the Mexican-American War and the signing of the Treaty of Guadalupe Hidalgo, however, the land was ceded to the United States.

The US government granted the land in what is now Valles Caldera to Luis Maria Cabeza de Vaca in 1860. It was then used mostly as a sheep ranch until it was purchased by James P. Dunigan in 1962 to use it as a cattle ranch. During this time, the Dunigan family also helped support the reintroduced elk population in the region and they ran a lucrative elk hunt business on their land for many decades.

By the late 1990s, the Dunigan family was ready to put their land, which was called the Baca Ranch, on the market. It received a lot of interest from wealthy individuals who wanted to buy their own private hunting and recreation destination.

However, after push from a number of stakeholders and various members of local and federal legislatures, Congress approved the purchase of the Baca Ranch for $101 million under the condition that it continue its role as a working ranch that allowed for hunting, grazing, and other similar activities, in addition to hiking and outdoor recreation opportunities.

After President Bill Clinton signed the Valles Caldera Preservation Act of 2000, the land was managed by a trust called the Valles Caldera Trust. The trust was tasked with becoming financially self-sustaining by 2015 as part of this initial legislation. However, this eventually failed as the trust was unable to raise the necessary capital each year.

In 2010, US Senator Jeff Bingham proposed legislation that would transfer the preserve from the trust to the US National Park Service. This legislation was supported by the trust and it allowed for the land to be managed alongside other national preserves. The transfer was finalized in 2015 as part of the Carl Levin and Howard P. ‘‘Buck’’ McKeon National Defense Authorization Act for Fiscal Year 2015.

As of 2015, Valles Caldera has been under the sole supervision of the US National Park Service. It is a popular hiking, hunting, and fishing destination in the region. In recent years, it has also become a popular destination for movie and TV show filming due to its stunning landscape. Some of the most famous recent film shootings in the region include those of The Lone Ranger and Longmire.

Valles Caldera National Preserve is one of the more unique parks in New Mexico. Unlike in many other regions in the state, access to Valles Caldera is highly limited and regulated. There is a fee to enter the reserve, so be prepared to pay for this when you arrive.

Once you arrive in the preserve, you will only be allowed to drive your vehicle to the Valle Grande Entrance Station. Here, you can check out the visitor’s center, talk with a ranger, and access a few short trails.

Additionally, visitors are allowed to drive on some of the preserve’s backcountry roads, but a backcountry vehicle permit is required in order to do so. The preserve only issues 35 permits per day during the summer months as of 2021. Permits are not issued during the winter and the backcountry is inaccessible to motor vehicles during this time.

If you want a vehicle permit, you can pick one up at the Valle Grande Entrance Station. As of 2021, the permits are issued on a first come, first served basis, so plan to arrive at the preserve early if you want a permit.

Furthermore, do note that overnight vehicle access and camping are not permitted in Valles Grande. So, if you have a vehicle permit, you will need to exit the preserve before it closes (check the park’s operating hours for up-to-date closing times).

Also, keep in mind that all of the backcountry roads in the preserve are dirt roads. The speed limit in the preserve is 10 mph (16 km/h) and a 4WD vehicle with high clearance is highly recommended.

There are relatively few trails in Valles Caldera that don’t re quire a backcountry permit to visit. These frontcountry trails are usually quite short, though they offer a chance to see the beauty of the preserve if you’re short on time.

Some of the best trails in Valles Caldera that don't require a permit include:

Although there are about half a dozen hiking trails available to visitors of Valles Caldera that don’t require a vehicle permit, there are many, many more that can be accessed if you’re lucky enough to be able to drive further into the preserve.

Here are some of the best backcountry hikes to check out in Valles Caldera of you’re looking for a bit of an adventure:

Looking for a place to stay near Valles Caldera National Preserve? Here are some of the best nearby cities and towns to check out:

Furthermore, even though the town is fairly isolated, it is also home to a number of important outdoor recreation events each year. These include the Tour de Los Alamos cycling race, the Run the Caldera Marathon, and the Jemez Mountain Trail Run.

The village of Jemez Springs is a small community of approximately 300 residents that’s located just to the south of Valles Caldera. Despite its small size, Jemez Springs has long been a popular tourist destination, thanks to its assortment of outdoor recreation areas, spiritual retreat centers, and namesake hot springs.

Jemez Springs is approximately 1.5 hours by road from Santa Fe, so it’s a nice basecamp for a trip to Valles Caldera. The village also has several nearby campgrounds, most of which are in Santa Fe National Forest and Fenton Lake State Park. Since no camping is allowed in Valles Caldera, Jemez Springs can be a great place to stay for the night.

Santa Fe is both the capital and fourth-largest city of the state of New Mexico. It is home to some 90,000 residents who live in the city proper and it is part of the greater Albuquerque-Santa Fe-Las Vegas metropolitan area that has a population of around 1.2 million people.

The city of Santa Fe is a world famous art hub. Santa Fe was the home of acclaimed artist Georgia O'Keeffe and the city now has a museum dedicated to her life and work. The city is also home to an assortment of art galleries, historical sites, and fantastic restaurants, so it’s a great place to visit during any trip to New Mexico. 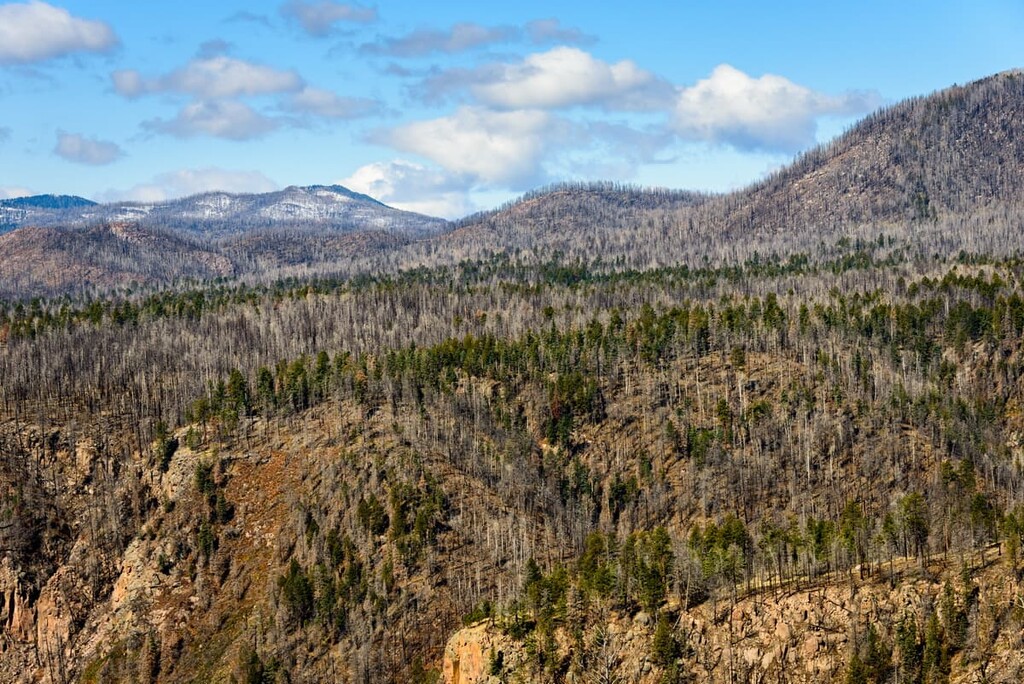 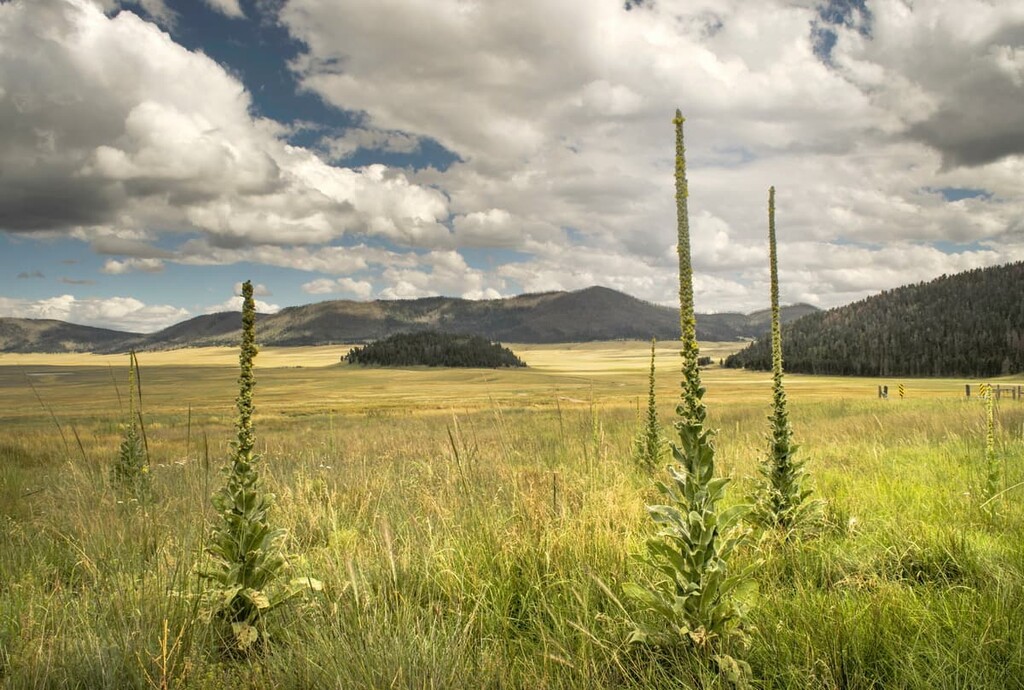 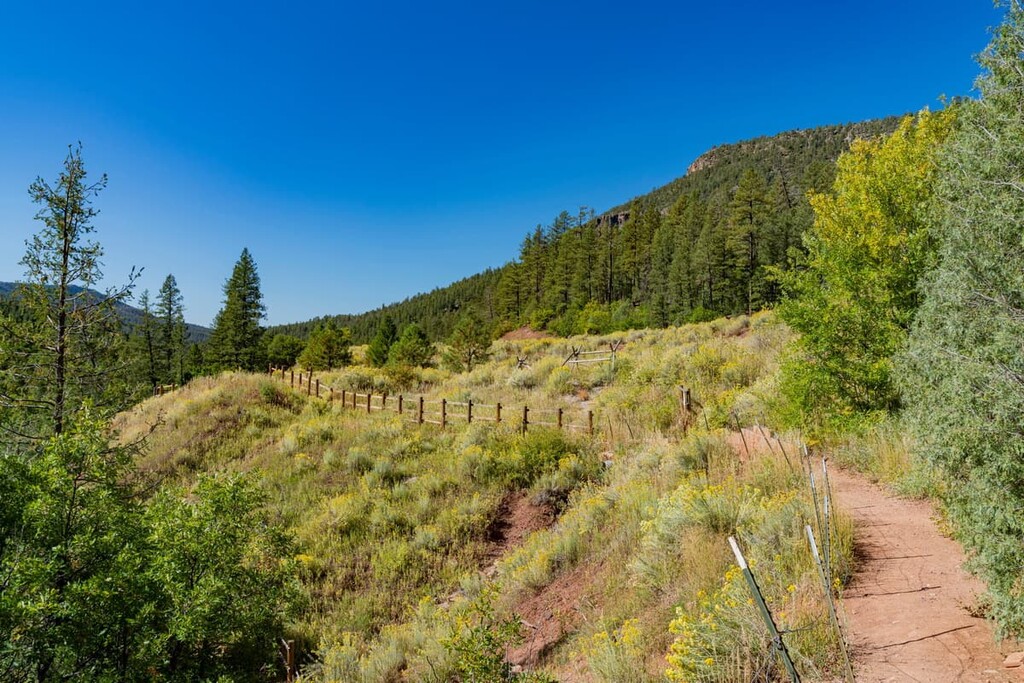 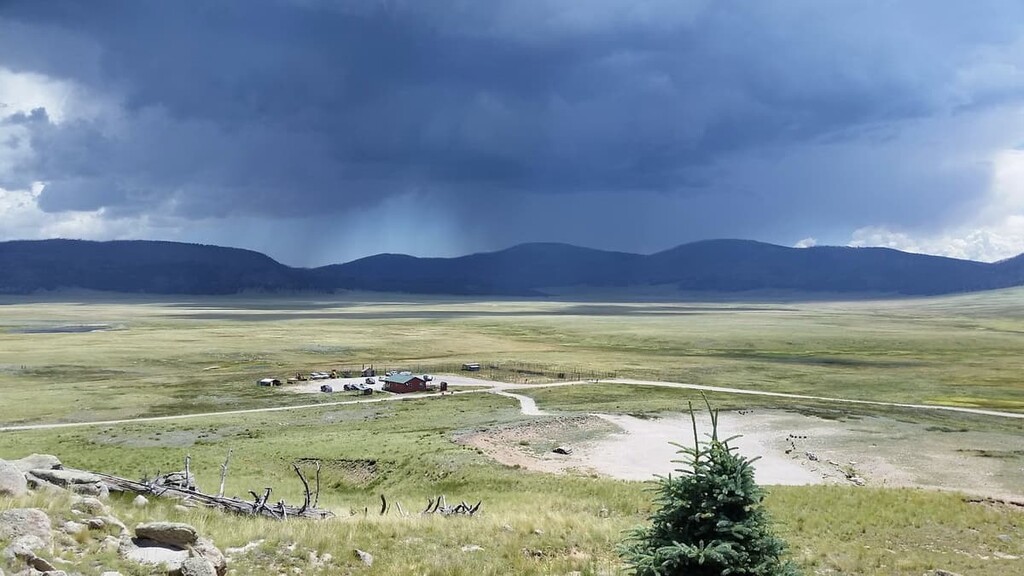 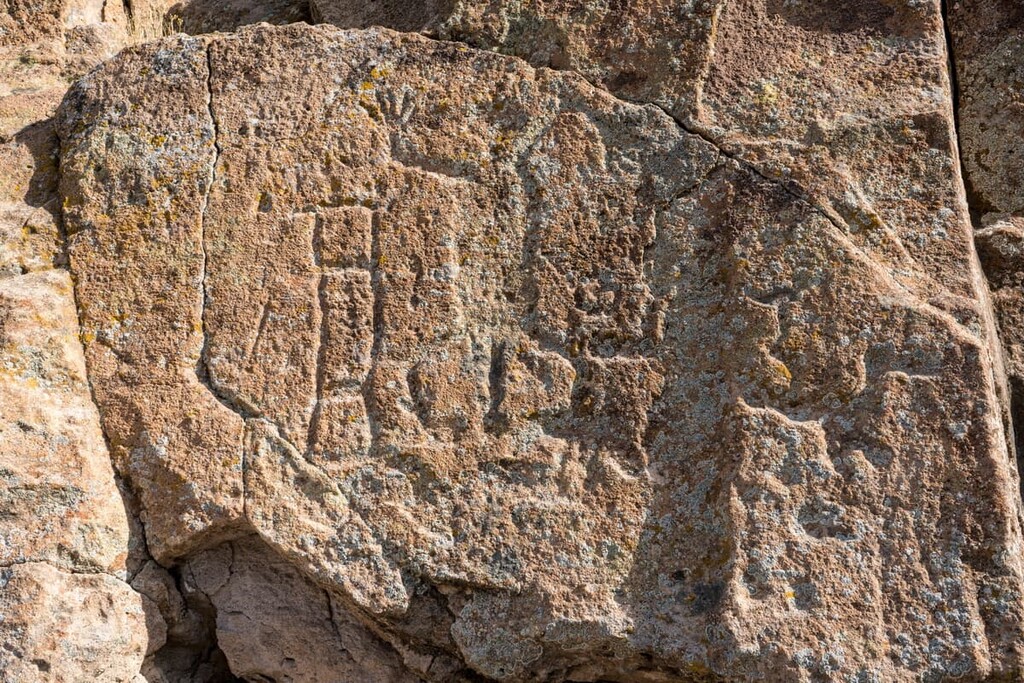 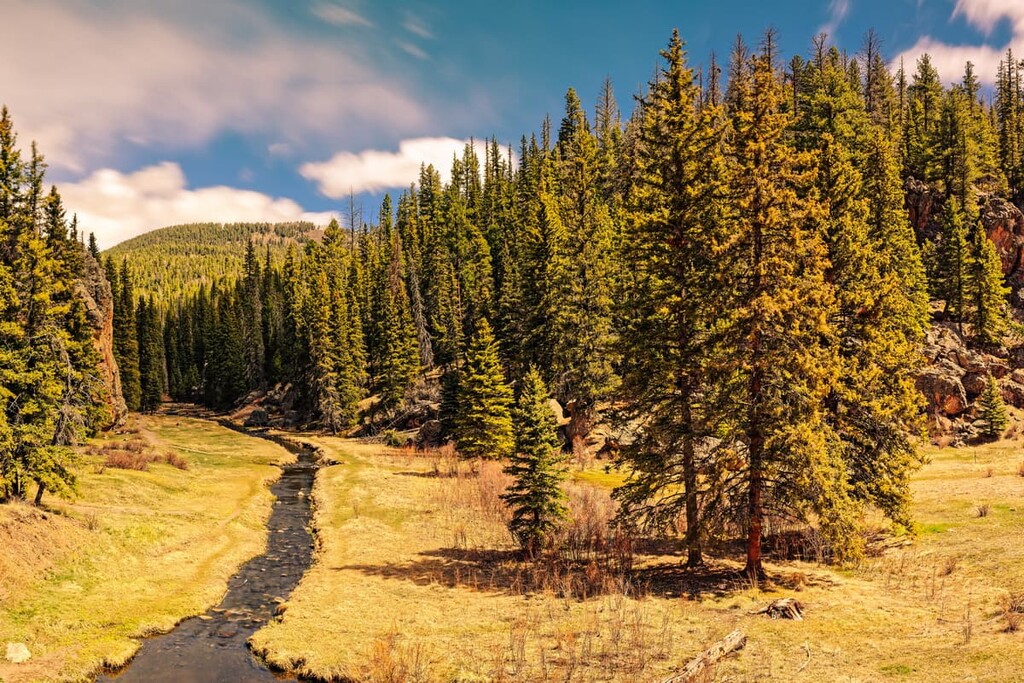