Home to one of the most dramatic features in the upper stretches of the Rio Grande, the aptly named Rio Grande del Norte National Monument is a federally protected area located in the northern part of the US state of New Mexico. The monument contains 11 named mountains, the highest and most prominent of which is Ute Mountain (10,082 ft/3,073 m). 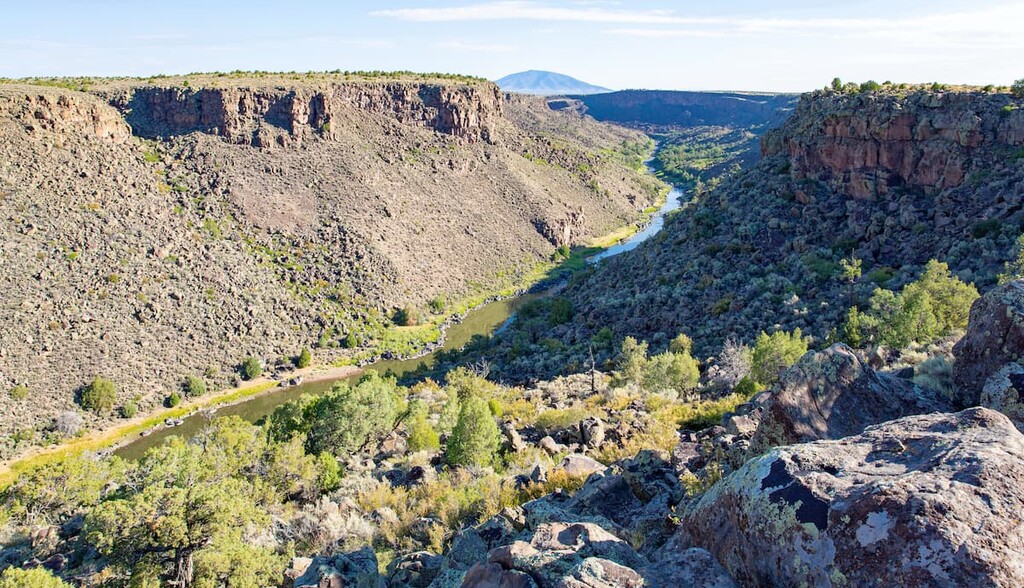 Rio Grande del Norte National Monument is a protected area of federally managed land that’s located in Taos County in the northern part of the US state of New Mexico near the state’s border with Colorado.

The monument is centered around the Rio Grande Gorge, which is a major chasm that runs for about 50 miles (80 km) from northwest to southeast along the upper stretches of the Rio Grande. This part of the river was actually one of the first few rivers to be designated as a National Wild and Scenic River in the US.

As the monument’s name suggests, Rio Grande del Norte National Monument is situated along the Rio Grande, which is one of the major rivers in the southwestern United States.

The river itself actually begins just to the north of the monument in the Rio Grande National Forest in Colorado. From there, it snakes its way into the San Luis Valley and into the Middle Rio Grande Valley before entering the Rio Grande Gorge.

Once it makes its way to the gorge, the Rio Grande flows through a massive canyon that it has carved out over the last few million years. Interestingly, this valley is actually located along the Rio Grande Rift, which is a continental rift zone that runs from about north to south down the state of New Mexico.

At its deepest, the valley walls of the Rio Grande Gorge are about 800 feet (244 m) high. The river carves through hundreds of feet of volcanic flows and ash and much of the surrounding landscape is dominated by igneous rocks, such as basalt.

In fact, there are a number of now-extinct volcanic cones in the monument, such as Ute Mountain, that are part of the Taos Plateau volcanic field. Most of the geologic features in the volcanic field date back about 1.8 to 4 million years ago, which makes the region fairly young in geologic terms.

As an added bit of geology-themed trivia, it’s worth mentioning that the area around the Rio Grande Gorge was once used for training astronauts for moon missions because of the landscape’s surprisingly similarities to the moon. In fact, NASA conducted geologic training at the site in the 1970s to train the Apollo 15, Apollo 16, and Apollo 17 teams.

Rio Grande del Norte National Monument is located in an exceptionally arid part of New Mexico. It features typical canyon ecosystems and a hot climate that limit foliage and wildlife to only the heartiest of species.

Much of the monument is dominated by shrubs and other drought-resistant plant species. However, you can also find piñon pine, ponderosa pine, white pine, juniper, and Douglas fir forests in the higher elevation regions of the monument.

As far as wildlife goes, the most commonly spotted species include mule deer, prairie dogs, and bighorn sheep. Red-tailed hawks and mountain bluebirds are also fairly common bird sightings in the monument.

The region in and around the Rio Grande Gorge has been inhabited by humans for at least the last thousand years. Indeed, the land is part of the ancestral homelands and traditional territories of many Indigenous peoples including the Jicarilla Apache, the Ute (Núu-agha-tʉvʉ-pʉ̱), the Taos Pueblo, and the Picuris Pueblo, among others.

It’s possible that the first person of European descent to visit the area was Francisco Vásquez de Coronado of Spain who traveled throughout what is now the southwestern United States during the 1540s. Spain established colonies in the region during this time, most notably one headquartered at what is now Santa Fe.

During this period of colonization, the Spanish forced Indigenous peoples, primarily Puebloans, into servitude and, in some accounts, into working in gold mines in the region. This eventually led to what is now called the Pueblo Revolt of 1680 where the Puebloans were able to expel thousands of Spanish settlers off of their lands.

However, this victory was short-lived as the Spanish returned just a few years later. The Spanish eventually lost their control over the region to Mexico after the Mexican War of Independence. Mexico eventually ceded the territory to the United States in 1848 with the Treaty of Guadalupe Hidalgo after the Mexican-American War.

By the 1800s, the regions to the north and south of the Rio Grande Gorge were popular amongst fur trappers, ranchers, and other settlers. Interestingly, the town of Questa became a fairly popular settlement spot for French and French-Canadian fur trappers who stayed in the area long after the fur trade subsided.

In the 1870s, with the arrival of the Denver & Rio Grande Railroad in Antonito to the north of the gorge, the region became an important stopping point on the rail line. However, ranching and other agricultural activities remain the primary economic drivers in the region.

However, the Rio Grande del Norte National Monument is actually one of the newest national monuments in the United States. It was given its designation in 2013 by President Barack Obama. In 2019, portions of the monument were designated as wilderness areas under the bipartisan John D. Dingell Jr. Conservation, Management, and Recreation Act.

Although the river itself is one of the major attractions of the monument, Rio Grande del Norte National Monument is also a great place to go hiking. There are a number of excellent hiking opportunities in the monument. Here are some of the best treks to consider for your next visit:

The highest point in the national monument, Ute Mountain has long been a popular destination in the region. From the summit, visitors can get superb views over the surrounding landscape, including of some Colorado 14ers located to the north.

However, there is no maintained trail or trailhead that leads to the summit of Ute Mountain. Rather, most people venture along a series of unmarked dirt roads to reach a parking area near the southwestern edge of the mountain. Needless to say, anyone venturing to the peak needs a rugged vehicle and a good sense of direction.

Once at the base of the peak, you can venture up the mountain on any route you choose to get to the summit. From there, you can enjoy the views before retracing your steps back to your car.

The Wild Rivers Recreation Area is an established recreation destination located within Rio Grande del Norte National Monument. From here, visitors have access to a whole host of maintained trails, including:

Do note that the Wild Rivers Recreation Area is a fee area. You will need to pay a parking fee to use the recreation area or you can buy an annual use pass.

Looking for a place to stay near Rio Grande del Norte National Monument? Here are some of the best cities and towns to check out:

One of New Mexico’s most popular mountain towns, Taos is a community of some 5,800 residents located in the north-central part of the state. Taos is situated within the Sangre de Cristo Range and it has long been a popular tourist destination in New Mexico.

Taos is particularly well known for its proximity to excellent outdoor recreation opportunities, which include a seemingly endless network of hiking trails. Additionally, the town of Taos is just a few miles from the Taos Pueblo, which is an ancient pueblo that dates back approximately 1,000 years, making it one of the oldest continuously inhabited communities in the country.

The fourth-largest city in New Mexico, Santa Fe is a metropolitan area of some 85,000 people that’s located in the north-central part of the state. Santa Fe has a well-known and bustling arts scene as well as plenty of superb restaurants for visitors to check out.

Additionally, Santa Fe is home to a number of important cultural heritage sites. The region in and around the city has been inhabited by a number of Indigenous groups for countless generations. Furthermore, the city is home to the San Miguel Chapel, which is believed to be one of the oldest churches in the US.

Known for its beautiful scenery, Questa is a community of about 1,800 residents that’s located just outside the Rio Grande Gorge. The town is situated along the Enchanted Circle Scenic Byway, which is one of the best scenic drives in New Mexico.

Questa is located near the confluence of the Red River and the Rio Grande and it is often considered to be a gateway to the national monument. Due to its location, Questa is also a superb starting point for trips into the Carson National Forest, the Latir Peak Wilderness, and the Columbine-Hondo Wilderness.

One of the southernmost towns in Colorado, the community of Antonito is a village of about 800 people. Antonito is located just to the north of Rio Grande del Norte National Monument and it was once a very important stop along the Denver & Rio Grande Railroad.

Although Antonio is generally a fairly quiet town, the community saw a surge in its economy due to cannabis tourism from New Mexico residents, where cannabis was illegal until 2021. Nevertheless, Antonito remains a great place to stay if you’re traveling to Rio Grande del Norte from the north, as it’s just a 3 hour drive from Colorado Springs. 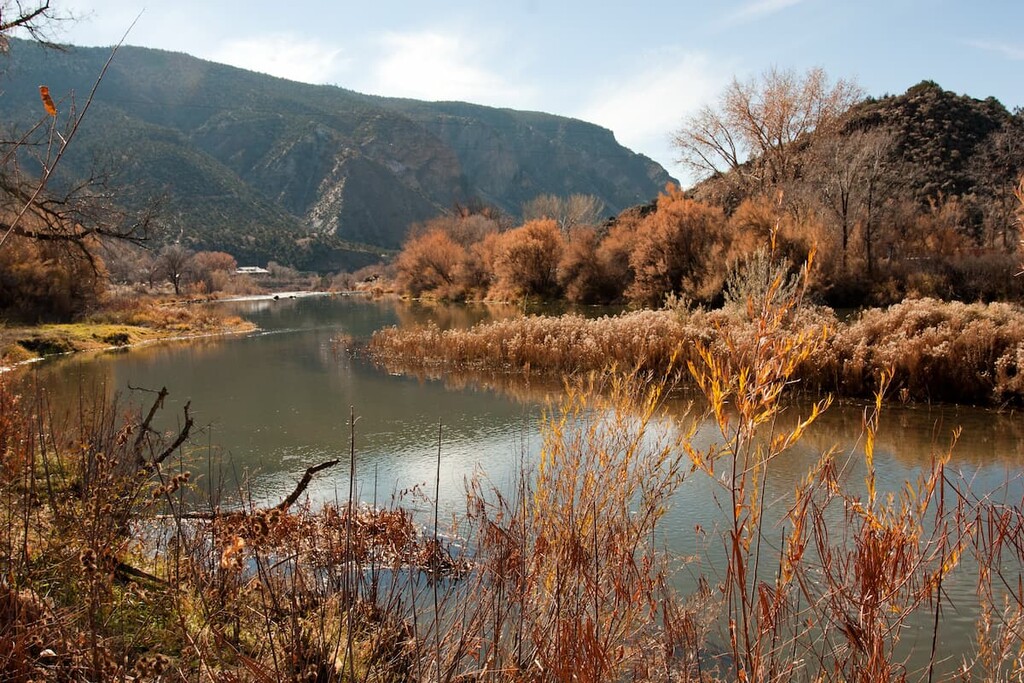 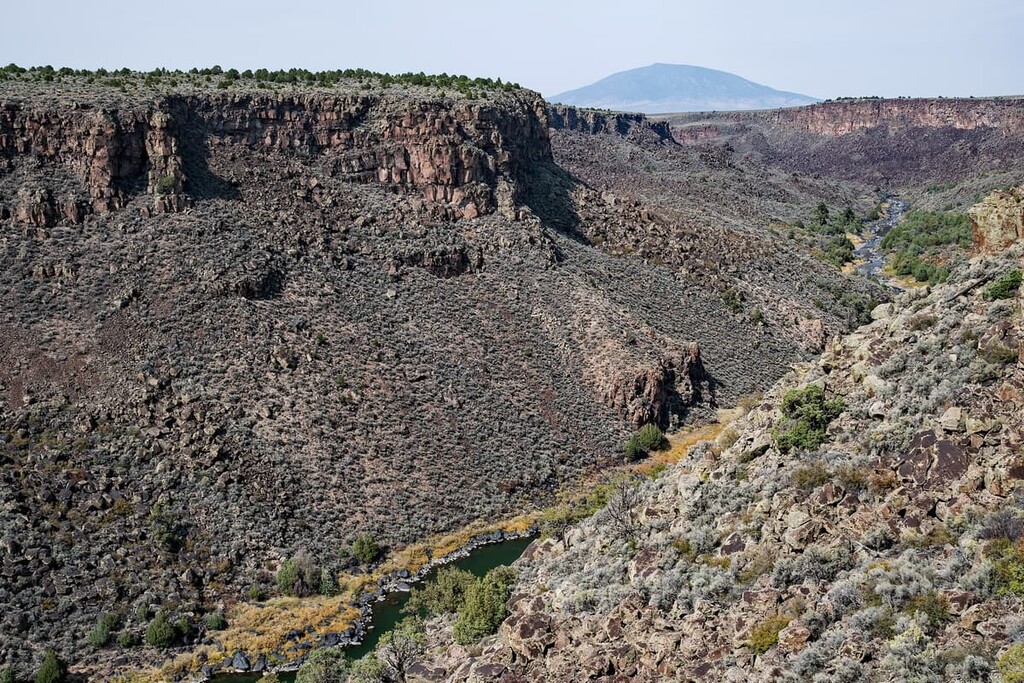 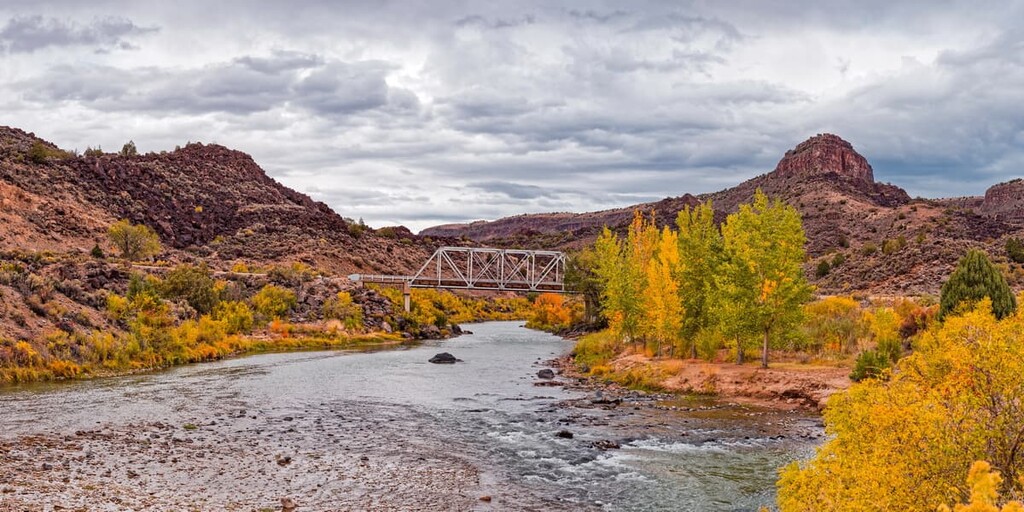 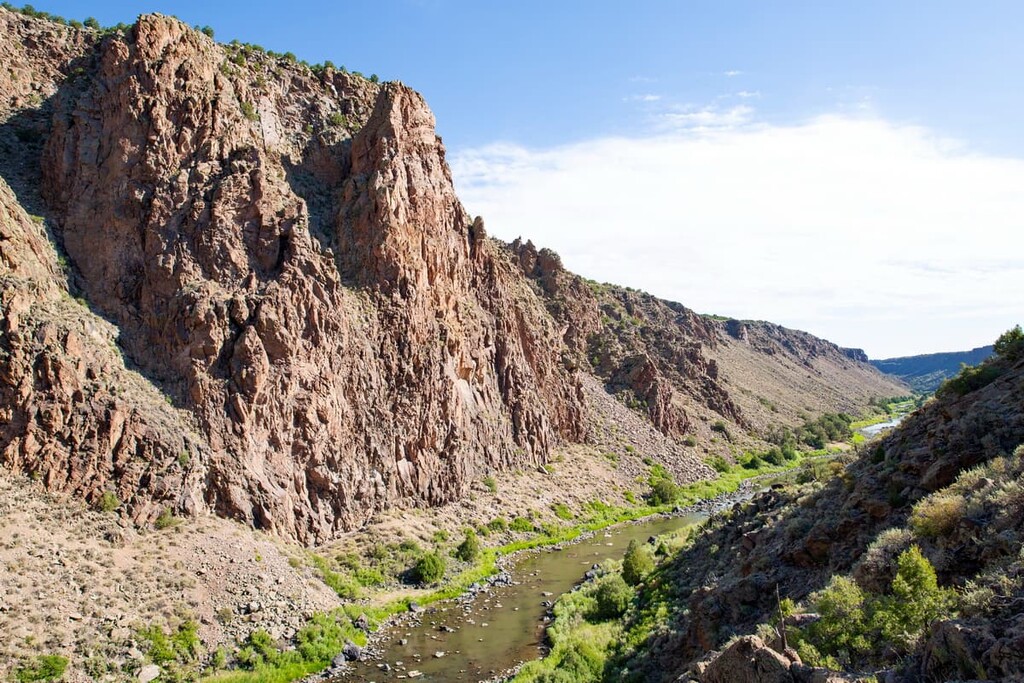 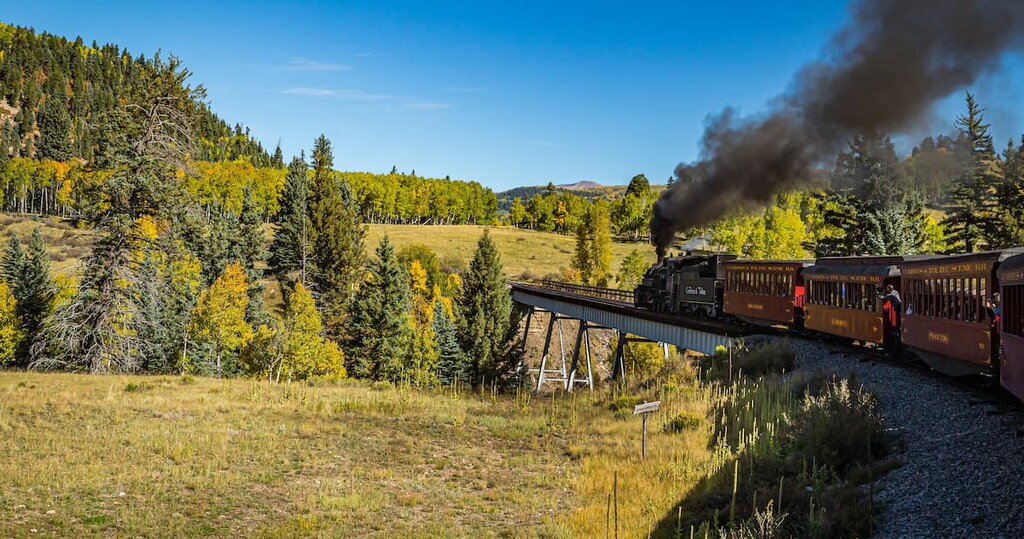