Featuring stunning swirls of multi-colored slickrock and some truly fantastic geologic features, Vermilion Cliffs National Monument is a federally protected area in the northernmost part of the US state of Arizona, along its border with Utah. Vermilion Cliffs contains 11 named mountains, the highest and most prominent of which is White Knolls (7,113ft/1,135m).

Vermilion Cliffs National Monument is located in the north-central part of Arizona, along the state's border with Utah. It is approximately 280,000 acres (113,000ha) in size and it is wholly contained within Coconino County to the north of Highway 89A and to the south of Highway 89.

The national monument is located in a very rugged part of the southwestern United States. It is within driving distance of some of the region's most iconic outdoor destinations. This includes Grand Canyon National Park, Grand Canyon-Parashant National Monument, Kaibab National Forest, Kanab Creek Wilderness Area, and Coconino National Forest to the south.

Vermilion Cliffs National Monument is also located near the Navajo Nation and the Hopi Reservation of the Hopi Tribe, which are situated just to the southwest.

Geologically, Vermilion Cliffs National Monument is part of the Colorado Plateau, which covers a large swath of the states of Utah, Arizona, New Mexico, and Colorado. In particular, the monument encompasses much of the Paria Plateau, which is to the north and east of the Kaibab Plateau, to the west of the Rainbow Plateau, as well as to the south of the Aquarius Plateau and the Kanab Plateau.

The Paria River, the biggest tributary of the Colorado River between the Grand Canyon and Lake Powell, traverses the plateau along its eastern edge. Despite the aridity that characterizes the region today, the Paria Plateau and its associated canyons were carved out over millions of years as large rivers cut through the region's sedimentary rocks.

Throughout the monument, the rock is almost exclusively sedimentary, with distinct layers of shale, limestone, siltstone, and sandstone, including Navajo sandstone. Over millions of years, the region's rivers, especially the Paria, carved out massive cliffs, some of which are upwards of 3,000 feet (914m) high.

Other commonly sighted landforms include mesas, buttes, arches, and sandstone amphitheaters. Some of the major high points in the monument include White Knolls, Coyote Buttes, The Big Knoll, PowellsMonument, Little Knoll, Middle Knoll, and Bush Head.

Perhaps the most famous geological formation in Vermilion Cliffs National Monument, however, is The Wave, a massive sandstone feature that's known for its stunning beauty and colorful wave-like patterns.

Like much of the surrounding region, The Wave is predominantly Navajo sandstone, which is believed to be Jurrassic in age. It was initially eroded by water, though, over millions of years, the drainages that once ran through the region ceased to exist and the landscape is now mostly eroded by wind.

However, the sandstone of The Wave is very fragile, due to its unique layered structure. As a result, the Bureau of Land Management limits the number of people who can visit the region each day and visitors are asked to tread lightly so as not to cause expedited eroding of the landscape.

Vermilion Cliffs National Monument is dominated by an arid desert climate typical of the region. However, contrary to popular belief, arid deserts such as those found in Vermilion Cliffs are home to an abundance of flora and fauna, which only add to the beauty of this landscape.

Along the Paria River and other drainages, the landscape supports riparian communities, which include plans such as rushes, horsetails, reeds, cattails, and sedges. In the drier soils slightly farther away from these sources of water, communities of cottonwood, tamarisk, seep-willow, ash, and coyote willow are common.

Meanwhile, pinyon pine, boxelder, and juniper can be found at higher elevations while cacti and other succulents can be found in the most arid of locales.

As far as wildlife goes, Vermilion Cliffs National Monument is home to an exciting array of species.

This includes dozens of species of birds of prey, including golden eagles, bald eagles, and peregrine falcons. Indeed, California condors can sometimes be spotted in the monument, as they were reintroduced to the region in the late 20th century.

Mammal species found in the monument include pronghorns, mountain lions, mule deer, bobcats, and desert bighorn sheep, the latter of which is endangered throughout its range.

There are even some fish and amphibians that inhabit the few rivers that run through this desert landscape, including red-spotted toads, flannelmouth sucker, speckled dace, razorback sucker, and bluehead sucker.

Although it's commonly viewed as a vast wilderness today, the land that is now Vermilion Cliffs National Monument has a long and storied history of human inhabitation that dates back at least 12,000 years. Indeed, the Vermilion Cliffs are home to hundreds of archaeological sites, including village remnants and countless examples of rock art, which demonstrate the rich culture of the peoples that have called this place home for millennia.

Before the arrival of Europeans and European-Americans in this region, the land that is now Vermilion Cliffs National Monument was the home of many different groups of people. Many Indigenous peoples consider the region to be part of their ancestral homelands, including the Southern Paiute and the Pueblo peoples.

It's also important to note that the national monument is located very close to a number of reservations that are home to multiple sovereign nations and tribes, including the Navajo Nation, the Hopi Tribe, the San Juan Southern Paiute Tribe, the Kaibab Paiute Tribe, and the Havasupai Tribe.

The first Europeans to visit the area were likely Spanish missionaries that came from the Dominguez-Escalante expedition in 1776. Approximately one century later, Mormon settlers arrived in the region, establishing a number of settlements in and around what is now Vermilion Cliffs National Monument in the 1870s.

At the same time, John Wesley Powell, who floated the Green and Colorado Rivers from Green River, Wyoming down through the Grand Canyon, also visited the region as he traveled around the Colorado Plateau.

However, the general lack of valuable minerals and the ruggedness of the landscape prevented widespread settlement of the region, though there were some mining operations in the 19th century for gold and uranium. While the land in and around the monument has historically been used for grazing, most of the region is considered undeveloped.

Despite its natural beauty, Vermilion Cliffs National Monument was not established until relatively late, having been officially designated by presidential proclamation in the year 2000.

The land that would become the monument was actually already under the purview of the US government, though this proclamation officially put under the management of the BLM, which is an agency within the US Department of the Interior, which manages the country's national parks. Interestingly, the new national monument also incorporated most of the existing Paria Canyon-Vermilion Cliffs Wilderness, which had been established by Congress in 1984.

Vermilion Cliffs National Monument is located near some of the most popular national parks in Utah and Arizona, such as Grand Canyon, Bryce Canyon, and Zion National Parks. However, it is a worthy hiking destination in its own right as it contains some truly spectacular outdoor recreation opportunities. Here are some of the best places to check out during your visit.

The Wave, which is located in the North Coyote Buttes section of Vermilion Cliffs National Monument is by and large the most popular hiking destination.

It is accessible via a number of different trailheads, though the majority of the trails in the region are signless and informal. Indeed, anyone attempting to hike to The Wave should be confident in their own backcountry navigation skills and they should come prepared with the appropriate equipment.

Temperatures and conditions near The Wave can easily exceed 100ºF (38ºC) during the summer months, so an early start is essential. Keep in mind that you also need a four-wheel drive vehicle with high clearance and experience with driving in deep sand to be able to access any of the trailheads that lead to The Wave.

Due to The Wave's popularity, the entirety of the Coyote Buttes region is accessible by permit only. You can get a permit for The Wave through either an advanced lottery or through an in-person lottery. Sign ups for the advanced lottery start 4 months before any given date while in-person lotteries happen at the Kanab Center Gymnasium in Kanab, Utah, one day ahead of time.

Permits can be very difficult to come by for The Wave as visitor numbers are strictly limited to prevent damage to the natural landscape. If you don't manage to get a permit, fear not! There are plenty of other equally worthy hiking areas in the monument to visit.

Although The Wave steals the spotlight in Vermilion Cliffs, there are plenty of other excellent places to enjoy during a trip to the national monument.

Great hiking options in the park include backpacking Paria Canyon. The canyon offers plenty to see and do, as well as some spectacular views of the region's staggering cliffs to enjoy. Keep in mind that you will need a permit to backpack in Paria Canyon.

White Pocket is an area of stunning colorful sandstone located in the heart of Vermilion Cliffs National Monument. You can access White Pocket via House Rock Valley Road, though you do need some off-road driving experience and a four-wheel, high-clearance vehicle to access the area.

Once at the trailhead, you can go on a day hike or backpacking trip into the White Pocket, which contains some fantastic ridges and domes to enjoy.

Unlike at The Wave, there is no permit system to visit White Pocket. But, years of high visitation to the region means that following Leave No Trace principles is particularly important to help preserve this amazing landscape.

Vermilion Cliffs is located in a remote part of Arizona, though it is fairly accessible from nearby towns. Here are some of the best places to stay in the region.

The city of Kanab, Utah is situated just to the northwest of Vermilion Cliffs National Monument. Its central location near a number of major outdoor recreation destinations make it a great place to stay if you're interested in visiting much of southern Utah and northern Arizona.

St. George is located about 1.5 hours to the northwest of Vermilion Cliffs National Monument. The city is home to approximately 90,000 people, which makes it the largest city in Utah outside of the Wasatch Front.

It is a popular destination for outdoor recreation, thanks to its proximity to a number of major national parks and forests. St. George is also located along I-15 and it has a regional airport with good connections around the western United States.

The city of Flagstaff is about a 2.5 hour drive to the south of Vermilion Cliffs National Forest. Flagstaff is home to approximately 75,000 residents and it is a well-known gateway to some of northern Arizona's most popular outdoor recreation destinations, including Grand Canyon National Park.

Visitors to the city can enjoy its stunning night skies as well as its close proximity to Humphreys Peak, the highest in the state. Flagstaff has a small regional airport as well as great road connections to the surrounding area. 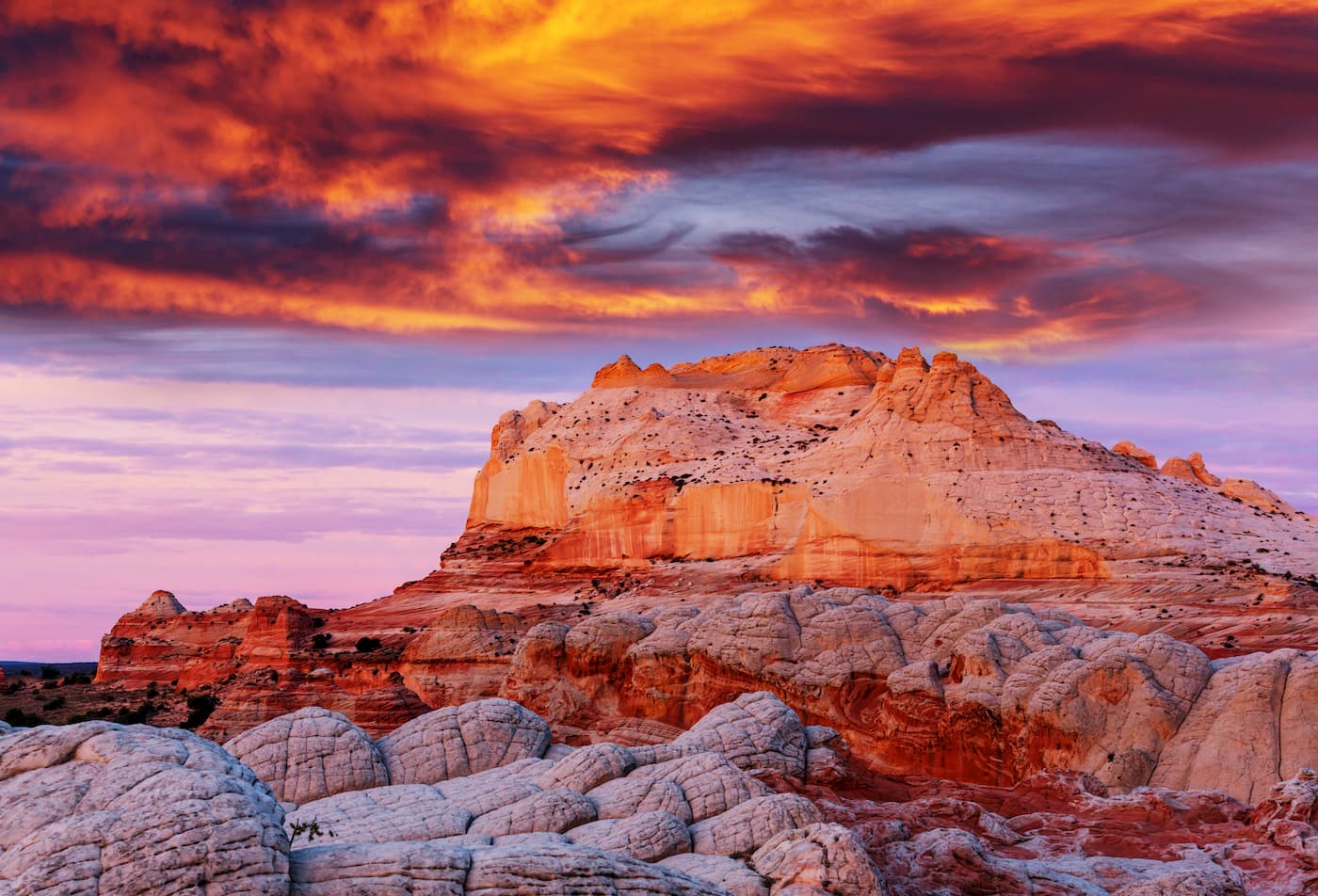 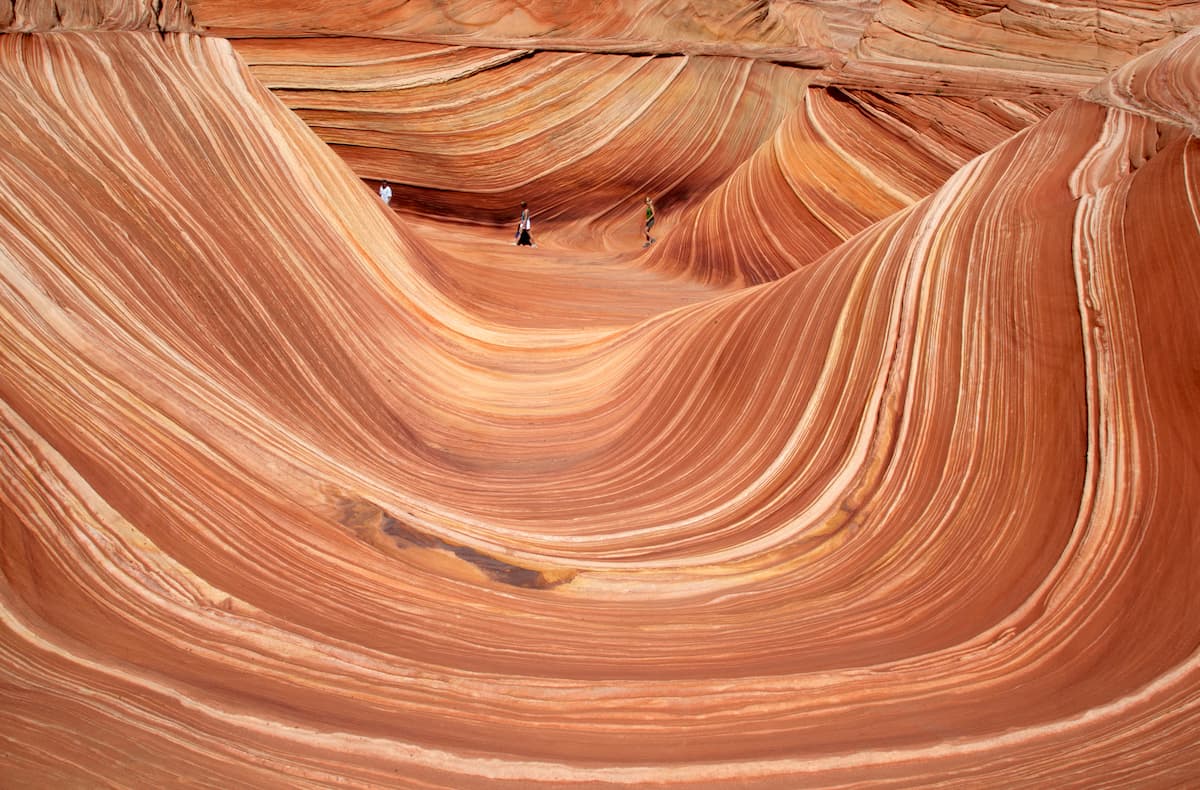 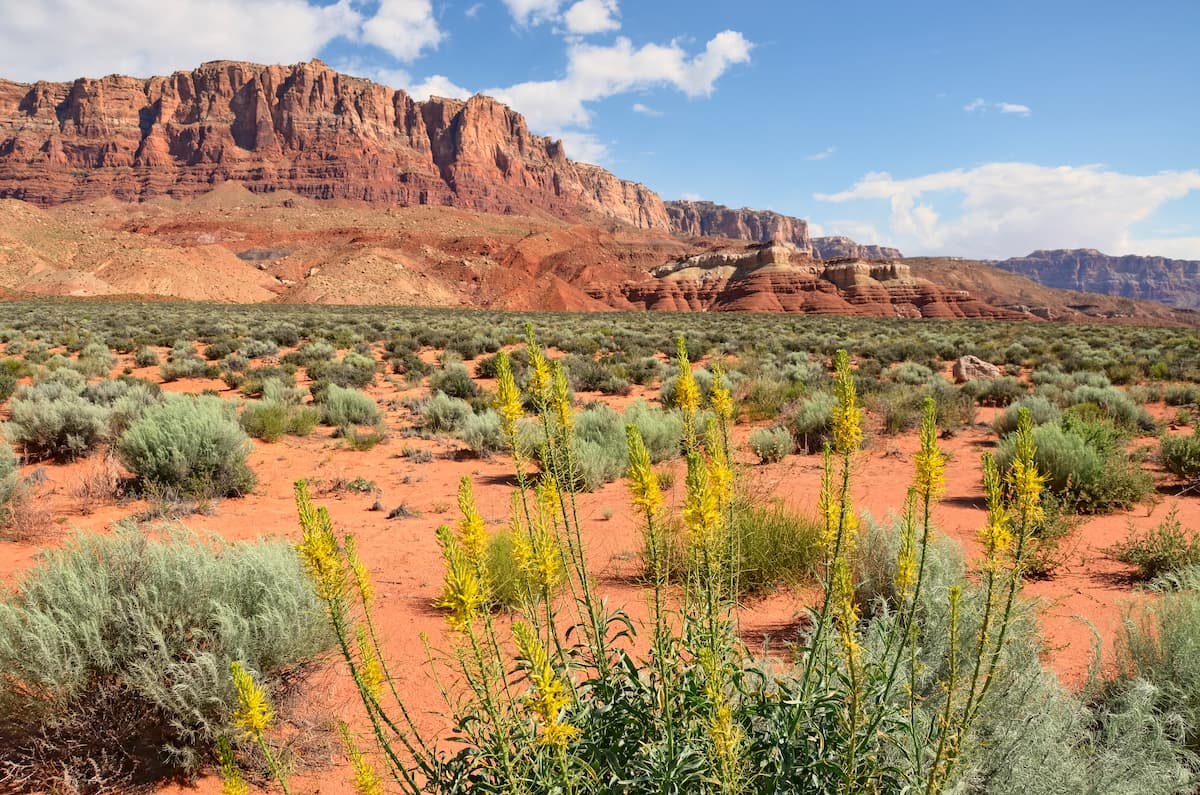 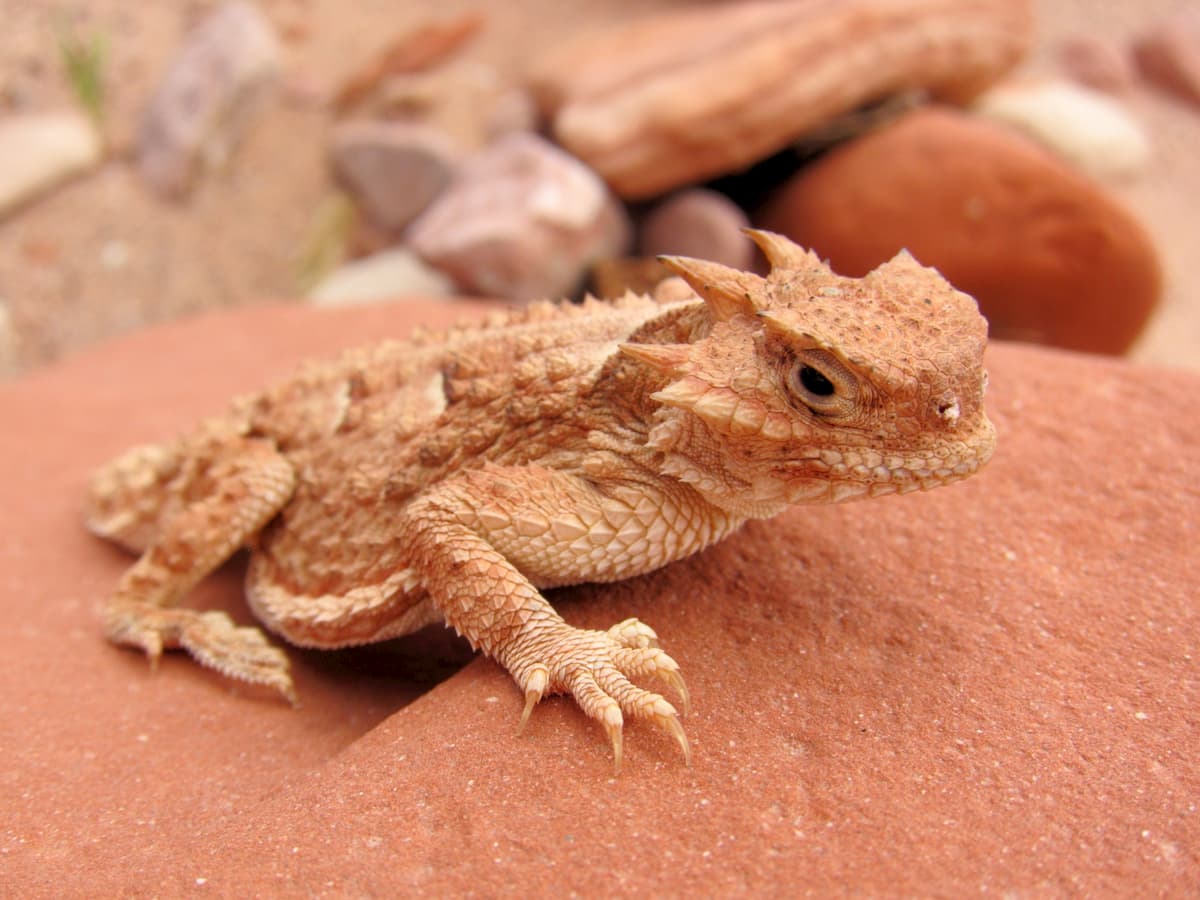 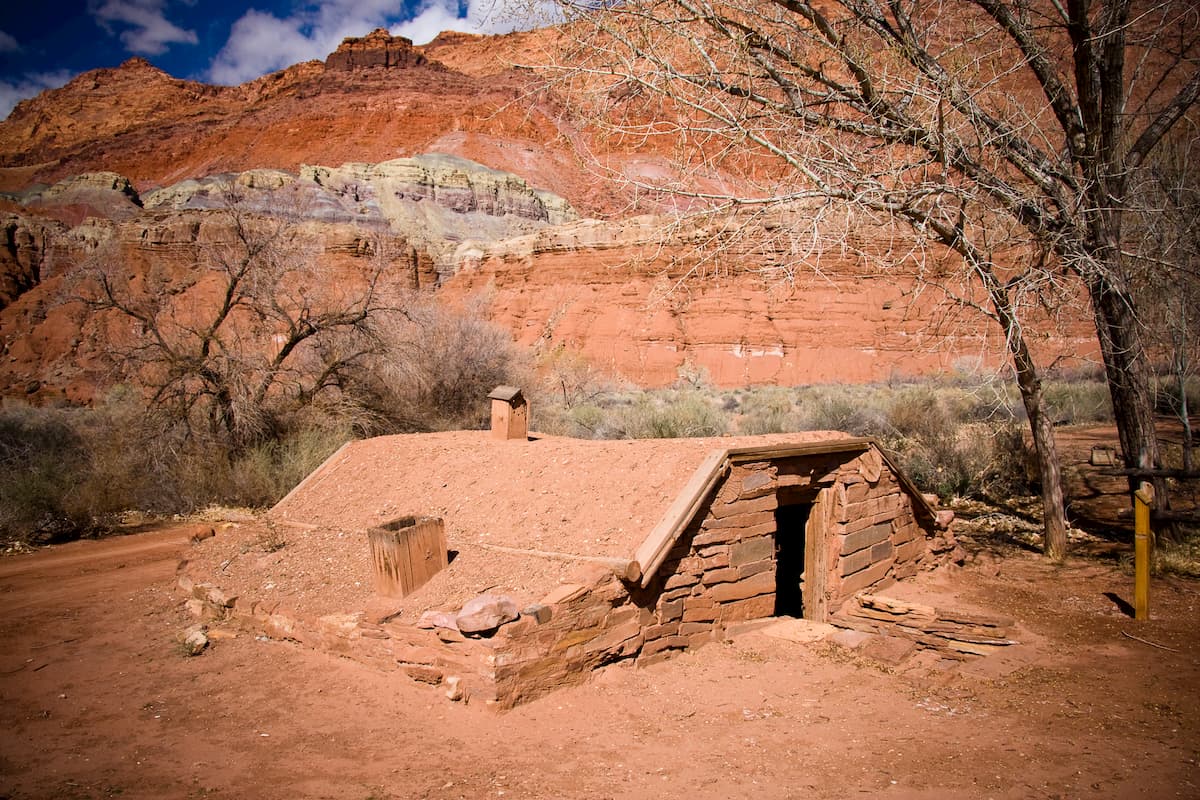 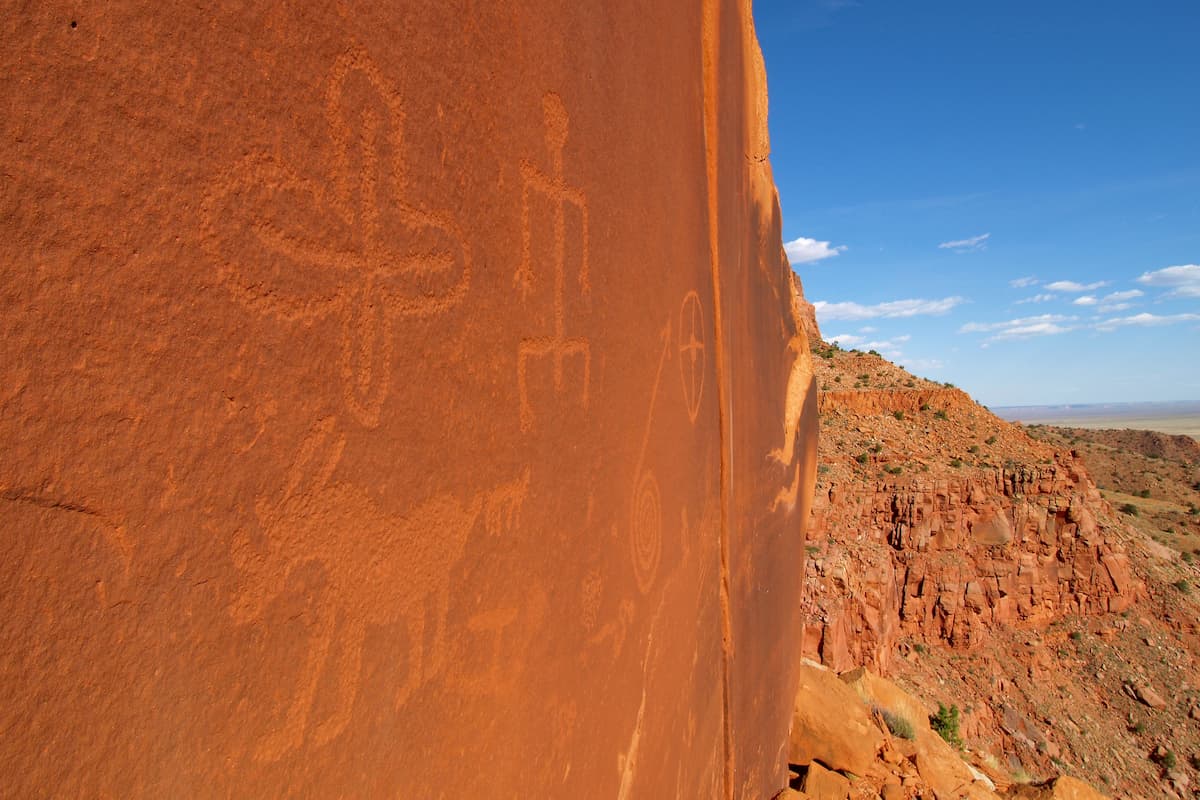