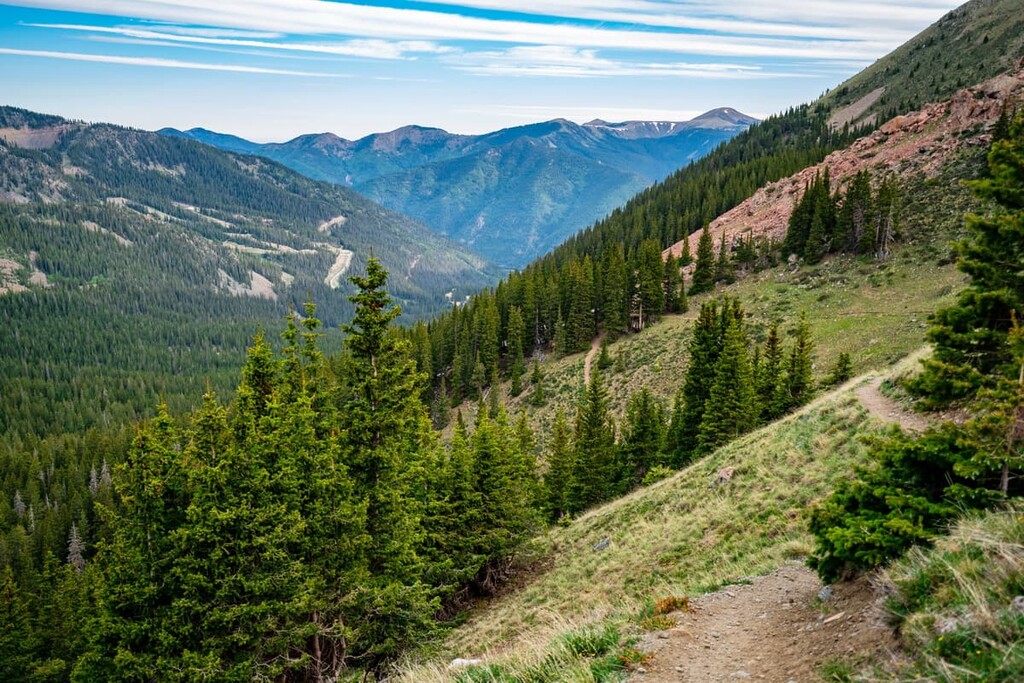 The Wheeler Peak Wilderness is a federally protected wilderness area located in the north-central part of the US state of New Mexico near the state’s border with Colorado. It is situated in the heart of Taos County and it covers approximately 19,661 acres (7,956 ha) of land.

In fact, the Wheeler Peak Wilderness is just one of the five wilderness areas in Carson National Forest, which is also home to the Cruces Basin, Columbine-Hondo, Latir Peak, and North Pecos wildernesses.

As one of the most rugged parts of northern New Mexico, the Wheeler Peak Wilderness has no shortage of stunning alpine views, steep canyons, dense woodlands, and towering peaks for visitors to enjoy.

Furthermore, the Wheeler Peak Wilderness is surrounded by other important areas of protected land, including the Columbine-Hondo Wilderness and the Latir Peak Wilderness to the north and the Colin Neblett State Wildlife Area, Philmont Scout Ranch, and Kimberlin Ponil Ranch to the east.

The wilderness area is also located to the north of the lands of the Taos Pueblo, whose ancestors have lived in the region since time immemorial.

The mountains in the Wheeler Peak Wilderness are part of the Sangre de Cristo Mountains, which is the southernmost subrange of the Southern Rocky Mountains and of the Rockies as a whole.

Technically speaking, the peaks in the wilderness are part of a subrange of the Sangre de Cristo Mountains that’s informally called the Taos Mountains. This includes peaks such as Wheeler Peak and Latir Peak, the latter of which is situated to the north of the wilderness area.

The Sangre de Cristo Mountains, like much of the rest of the Rockies, formed as a result of widespread uplifting that occurred during the Laramide orogeny. These peaks consist of a vast assortment of different rocks. The oldest rocks in the range are gneisses that date back to the precambrian but most of the rocks are much younger limestones, sandstones, and dolomites.

Furthermore, as is the case across much of the Rocky Mountain crest, the Sangre de Cristo Mountains were glaciated during the last major glaciation. These glaciers helped to carve out many of the major valleys and other landforms that we see in the region today.

The ecology of the Wheeler Peak Wilderness is, in many ways, similar to that of the rest of the mountainous regions of Carson National Forest.

However, it’s worth noting that the Wheeler Peak Wilderness is home to nearly all of the tree species that are native to the northern part of New Mexico. The most dominant tree species in the region are easily subalpine firs and Engelmann spruces.

Furthermore, the lofty summit of Wheeler Peak is home to one of the only true alpine ecosystems in New Mexico. This alpine zone contains a beautiful array of wildflowers and foliage that’s commonly referred to as an “alpine mat” due to its density of different species. Visiting the summit of Wheeler Peak in the summer is particularly wonderful due to the plethora of wildflowers that bloom in the area.

Other species of note in the wilderness include the golden eagle, which is often seen circling the alpine regions of the area in search of food.

Finally, the Wheeler Peak Wilderness is a particularly popular spot for anglers as it contains a number of lakes that are stocked with trout.

In particular, the New Mexico Department of Game and Fish stocks lakes like Lost Lake and Horseshoe Lake with cutthroat trout, which are native to the region. Other bodies of water, such as Middle Fork Lake, the East Fork of the Red River, and the Rio Hondo, are also stocked with rainbow trout. Note, however, that you do need a license to go fishing in the state.

The land in and around the Wheeler Peak Wilderness has been inhabited by humans for countless generations. The region is the traditional territory of a number of Indigenous peoples, including the Pubeloans (particularly the Taos Pueblo), Jicarilla Apache Nation, and the Ute (Núu-agha-tʉvʉ-pʉ̱).

People of European descent first arrived in the region sometime during the early seventeenth century. The Pueblo Revolt of the 1680s drove a number of Spanish colonizers out of the region, though they eventually returned to the area around the Sangre de Cristo Mountains.

Although the land in the Wheeler Peak Wilderness is still quite remote, the region around it was heavily colonized by the Spanish in the eighteenth century. In particular, the Spanish established the city of Don Fernando de Taos (now just called Taos) in the eighteenth century, at which point they forcibly took land from local tribal nations for use by Spanish ranchers.

The region became part of Mexico following the Mexican War of Independence in 1821. It was then ceded to the United States as part of the treaty of Guadalupe Hidalgo after the Mexican-American War in 1848.

Afterward, the US government embarked on a campaign to encourage settlement of the region, mostly through the establishment of farming, ranching, and hunting industries. Although the region around Wheeler Peak didn’t experience the same mining boom as the nearby San Juan Mountains, there were a number of smaller mines in the area at this time.

Today, the Wheeler Peak Wilderness remains a prime destination for adventures into some of the most remote terrain in northern New Mexico. There are plenty of fantastic hiking trails to choose from, as well as superb camping locations for visitors to check out in the region.

The Wheeler Peak Wilderness is a popular destination for hikers looking to get out and enjoy the remote backcountry of the Sangre de Cristo Mountains. Here are some of the best hikes to check out in the wilderness:

The Wheeler Peak Summit Trail (trail #67) is a steep, yet scenic path to the summit of the wilderness area’s tallest peak. This trail is approximately 8.2 miles (13.2 km) long round-trip, though it gains an impressive 2,961 ft (903 m) along the way.

To hike to the summit of Wheeler Peak, you’ll start at the trailhead at Williams Lake and follow the Williams Lake Trail until it connects to the Wheeler Peak Summit Trail. This trail features plenty of switchbacks that criss-cross steep scree slopes, leading you above tree line where stunning vistas await.

Offering a chance to experience the stunning Lost Lake firsthand, the Lost Lake Trail (trail #91) is a 9.6 mile (15.4 km) round trip adventure that boasts beautiful scenery. This trail starts at the Middle Fork Trailhead just outside of the wilderness and heads steadily uphill into the alpine.

The trail traverses a number of steep slopes, so it’s not ideal for people who aren’t steady on their feet. When you arrive at Lost Lake, however, there are excellent opportunities to camp or fish in the region. Keep in mind that you will need a license to fish in the lake, so come prepared with the right permit before your hike.

The Williams Lake Trail (trail #62) is one of the most popular adventures for campers in the Wheeler Peak Wilderness. This hike is 8 miles (12.9 km) long round-trip, but it climbs fairly steeply out of the Taos Ski Valley.

On this trail, hikers get a chance to see Williams Lake, which is located at the foot of Wheeler Peak. From here, you can also climb to the summit of Wheeler Peak, but be aware that the climb is quite steep. Also note that this trail has a high risk for avalanches when snow is on the ground, so take care during the colder months of the year.

Looking for a place to stay near the Wheeler Peak Wilderness? Here are some of the best cities and towns to check out:

One of the largest towns in northern New Mexico, the community of Taos is home to some 5,800 people who live just to the south of the Wheeler Peak Wilderness. The town is a popular tourist destination thanks to its rich cultural heritage and stunning mountain views.

Additionally, Taos is also located just a short drive from Taos Pueblo, which is one of the oldest continuously inhabited communities in what is now the United States. Taos Pueblo is generally open to visitors, so it’s a great place to learn more about the rich cultural heritage of this long-standing Indigenous community.

Taos is easy to get to by road from Santa Fe and by air from a number of major cities in the southwestern United States via Taos Air.

Questa is a small town of approximately 1,800 people that’s located to the northwest of the Wheeler Peak Wilderness. The village also offers exceptional access to the Rio Grande del Norte National Monument.

Although Questa is fairly small, it is home to a number of important cultural sites. This includes the San Antonio del Rio Colorado Church, which dates back to the mid nineteenth century.

Questa is accessible only by road, though there is a free bus service from the village to Taos and Red River during standard commute hours.

Located just to the east of the Wheeler Peak Wilderness, Eagle Nest is a village of about 300 people that’s known for being a popular resort destination. The community is situated within the heart of the Sangre de Cristo Mountains in the Moreno Valley.

Although Eagle Nest is a small village, it is a popular place to stay if you’re looking for a quiet mountain getaway. The community is also located just outside Eagle Nest Lake State Park.

Like Eagle Nest, Red River is a small resort town located in the Sangre de Cristo Mountains. The village has a population of about 500 people and it is located along the Enchanted Circle Scenic Byway to the north of the wilderness.

During the winter months, Red River is a popular ski destination at the Red River Ski & Summer Area. However, the town also has a number of fantastic hiking, rafting, horseback riding, fishing, and biking opportunities during the summer months. 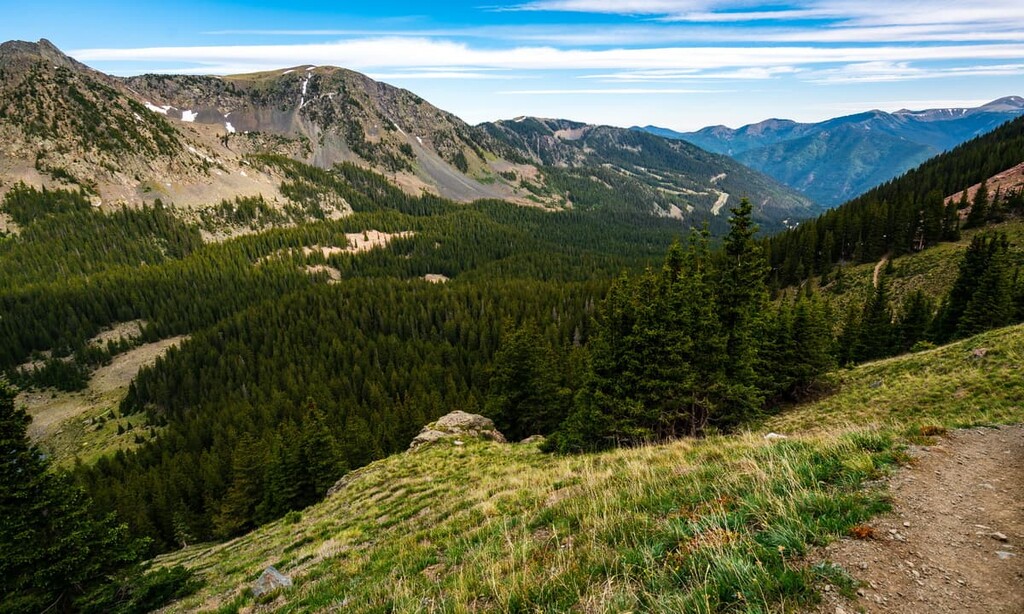 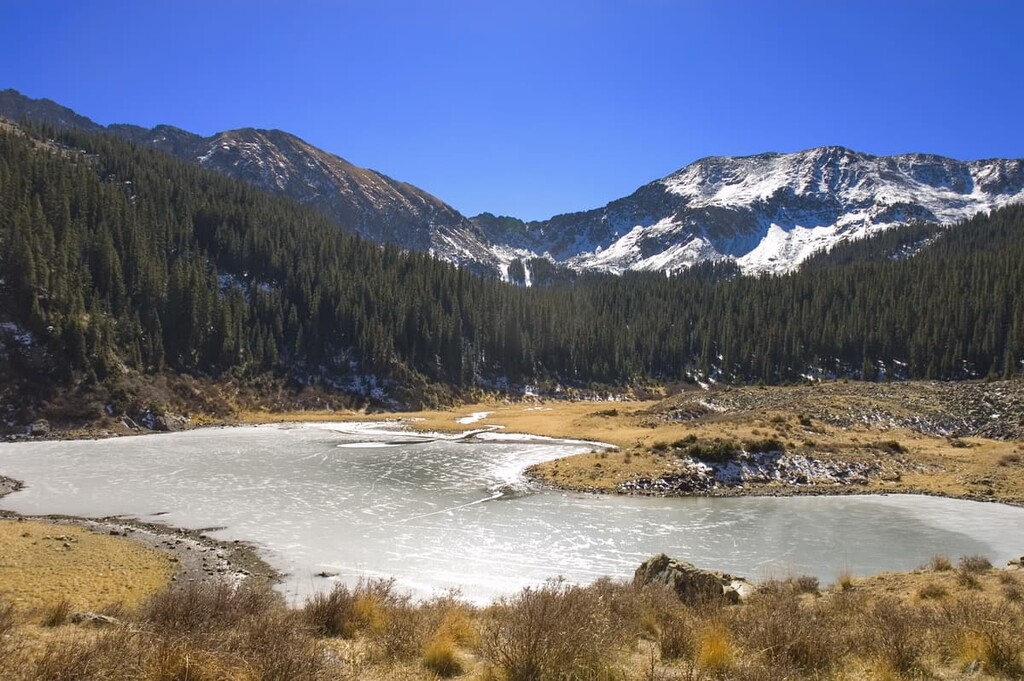 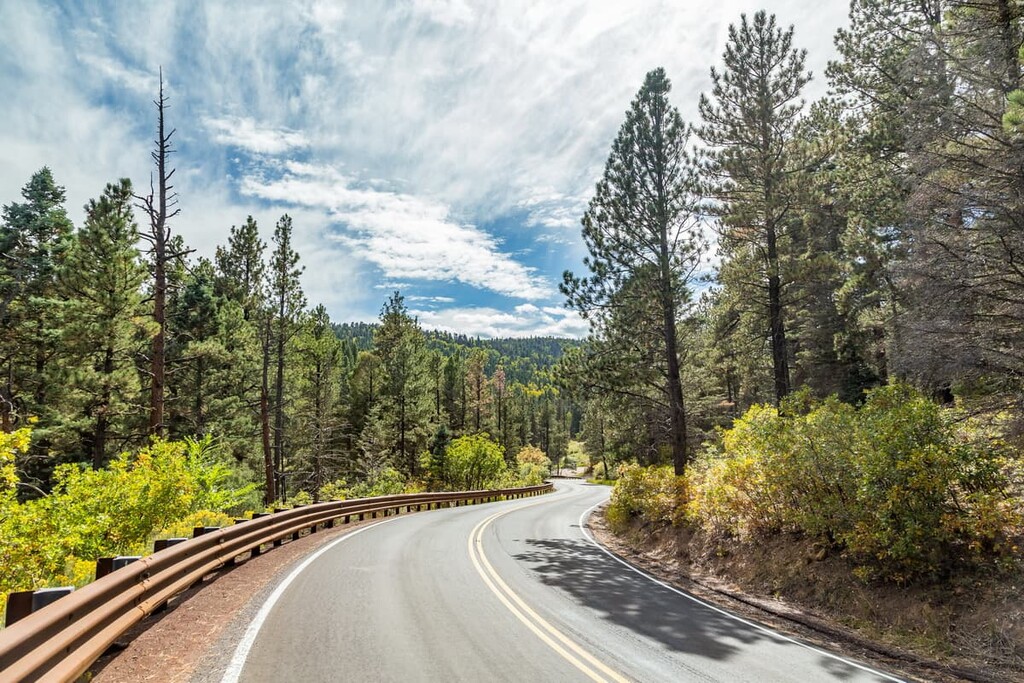 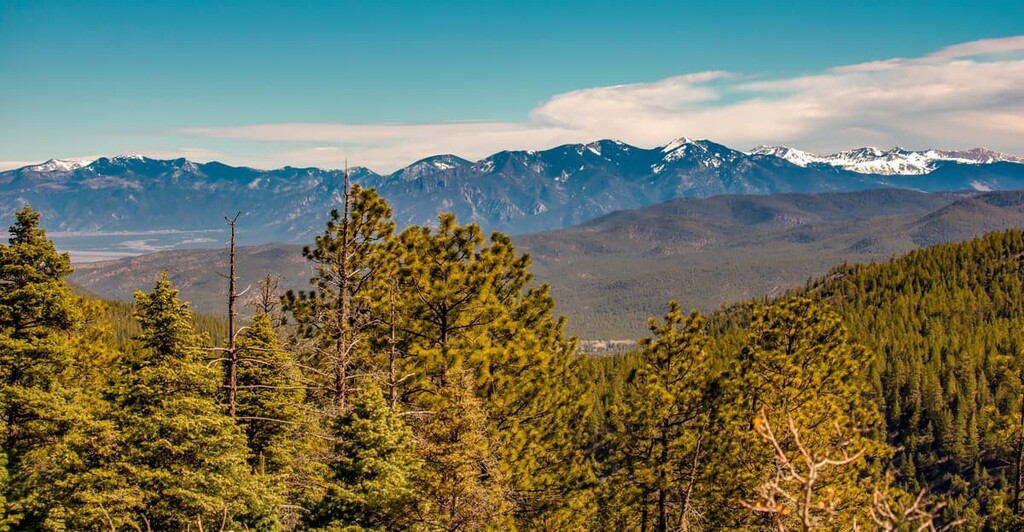 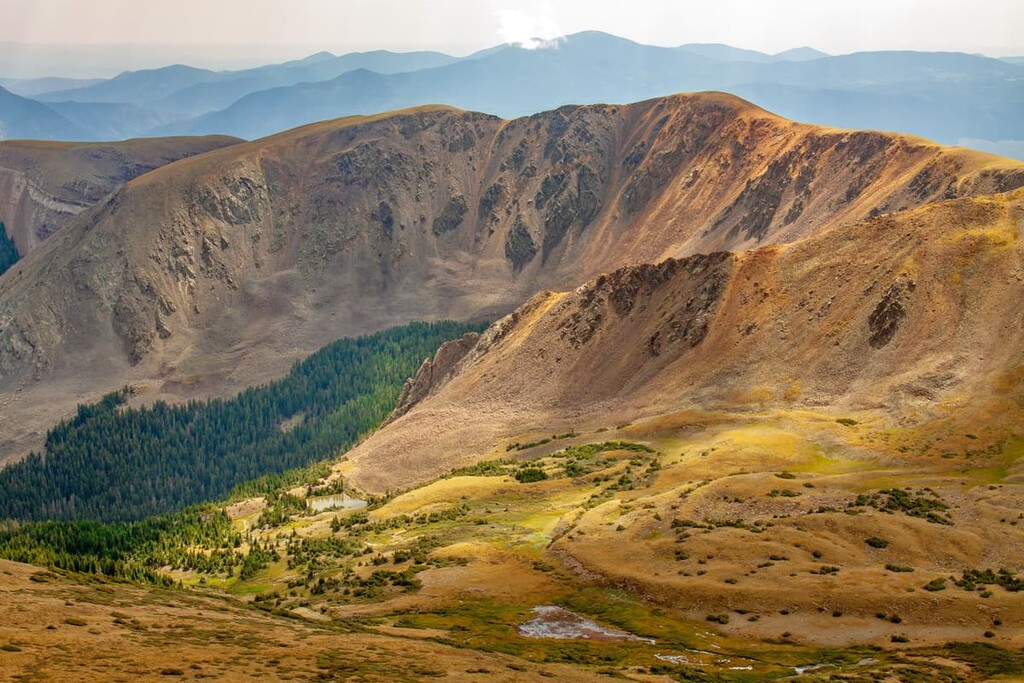 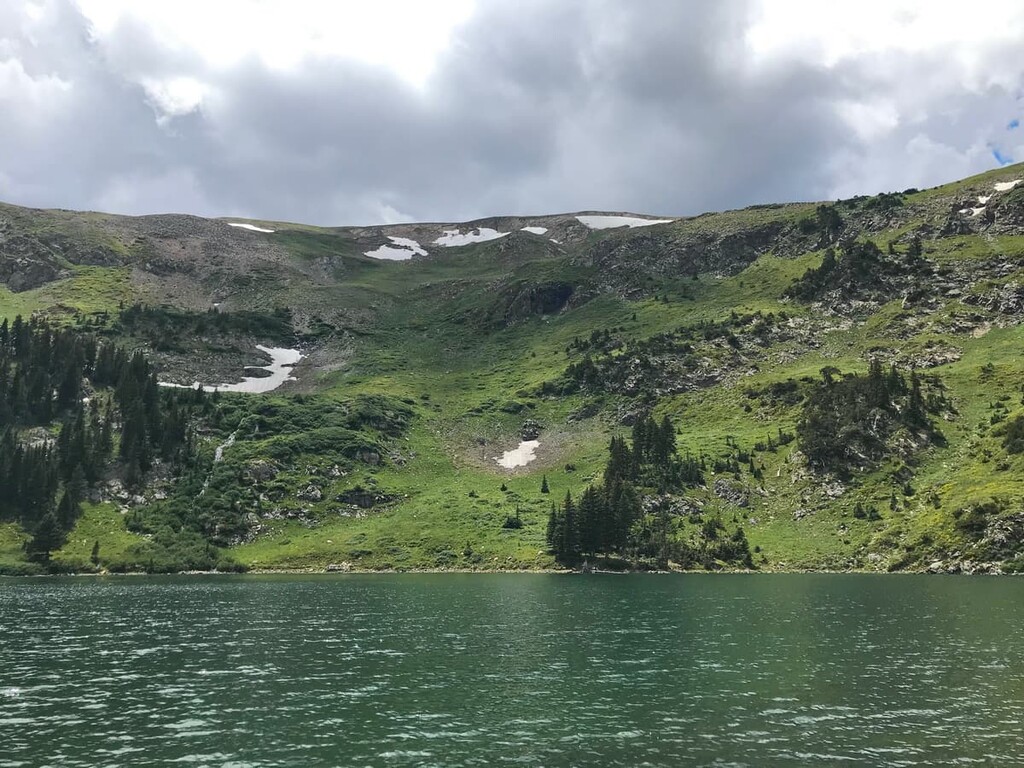 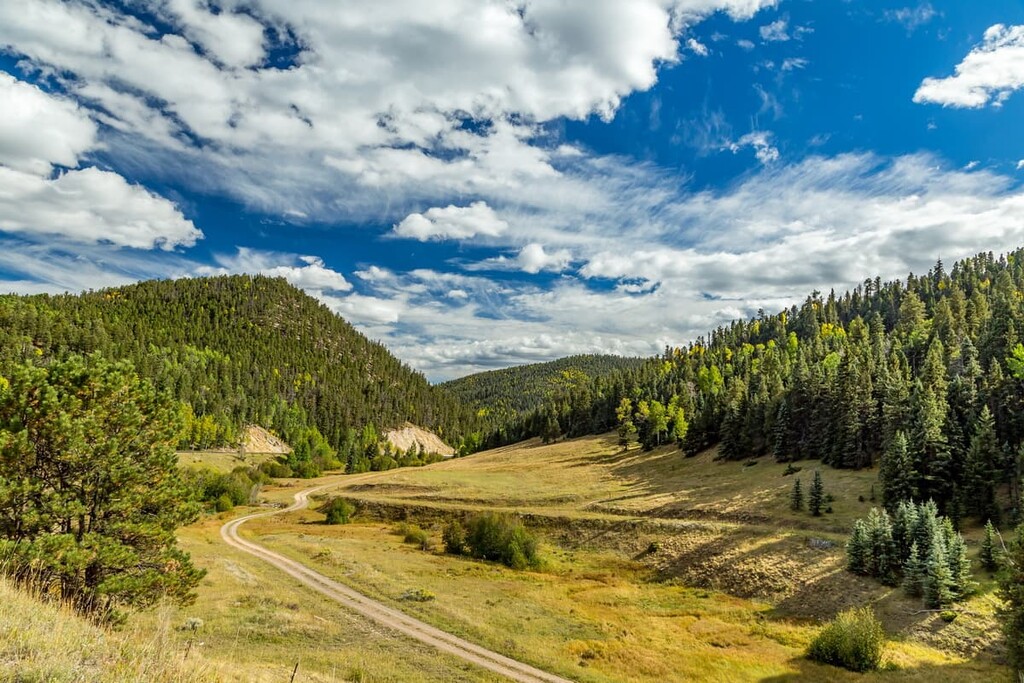