Gila National Forest is a large parcel of federally managed land located in the western part of the US state of New Mexico. The expansive forest is known for being the sixth largest forest in the continental United States. Gila National Forest contains 299 named mountains, the tallest and most prominent of which is Whitewater Baldy at 10,892 ft (3,320 m) in elevation and 3,547 ft (1,081 m) of prominence. 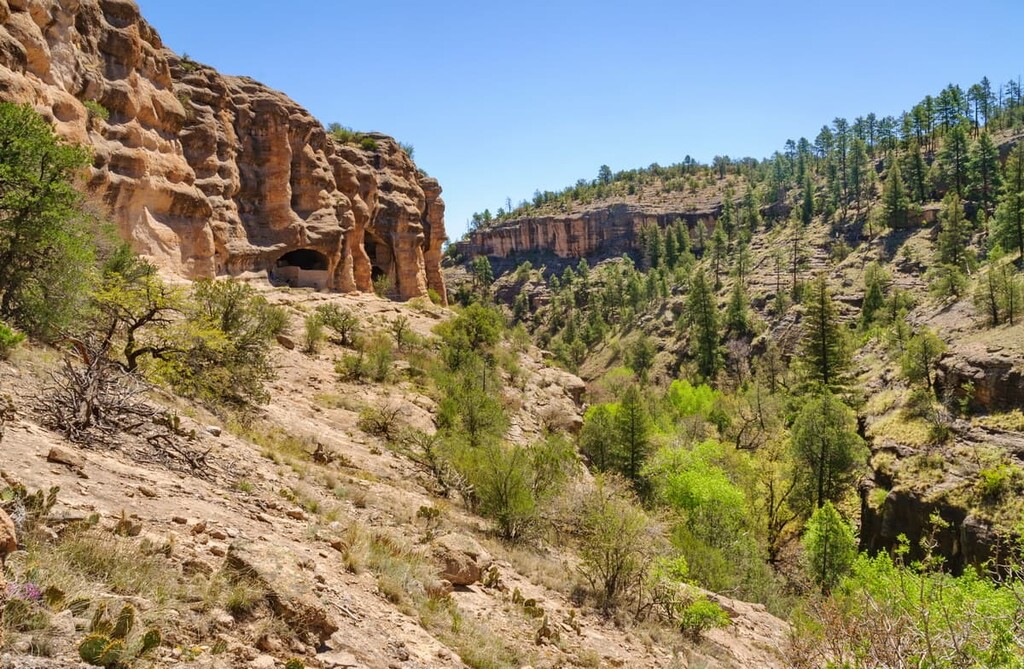 Gila National Forest is situated in southwestern New Mexico. It is located in Grant, Sierra, Catron, and Hidalgo counties near the state’s border with Arizona.

The terrain and topography varies widely throughout the vast Gila National Forest. While some sections are dominated by high mountain ranges and lush patches of forest, others are semi-arid lowlands with deep canyons.

The Mogollon Mountains (also called the Gila Mountains) cross the forest and are home to the tallest peaks in the region. This rugged range spans roughly north-south for about 30 miles (48 km) with the crest of the range reaching 15 miles (24 km) in length.

The Black Range spans throughout the eastern section of the forest within the Aldo Leopold Wilderness. Along the foothills of this range lie numerous narrow and steep stream valleys, with numerous being over 1,000 feet (305 m) deep.

The Blue Range is situated in the western region of the forest but is still home to stretches of the Mogollon Rim. This rim spans 200 miles (322 km) across the region forming the southern boundary of the Colorado Plateau.

The vast majority of Gila National Forest lies within the Mogollon Plateau of the Colorado Plateau on the Mogollon-Datil volcanic field. Eruptions began in the region around 40 million years ago, paving the way for widespread volcanism in the area.

Over the course of millions of years and three phases of volcanism, the activity of this volcanic field left behind an ash sheet that covered much of the region. Basin and range extension along with faulting led to the formation of deep basins in the area. This also allowed the ash sheet to be distributed across various elevations.

Frequent eruptions with the plateau led to the formation of the Mogollon Mountains (also called the Gila Mountains), which formed around 25 million years ago. Today, hot springs throughout the forest showcase remnants of the volcanic activity that once shaped the landscape. Popular hot springs include Middle Fork, Jordan, and Turkey.

Gila National Forest is home to a wide range of flora and fauna throughout its varying elevations. Because the forest is one of the least developed areas in the southwestern US, many species are able to thrive in the region. In fact, the national forest is home to one of the world’s largest stretches of healthy ponderosa pine forest.

Predators such as bobcats and cougars roam the region, as do black bear, mule deer, pronghorn, and white-tailed deer. Other mammals include the gray fox, collared peccary, white-nosed coati, and the endangered Mexican wolf. Thanks to the protection of the forest, there are now four established packs of Mexican wolves within the region.

Birds are found throughout the forest with common species including wild turkey, bald eagle, dusky grouse, goshawk, and osprey. The forest is also home to spotted owls whose population is listed as near threatened by the IUCN.

Due to the semi-arid climate in the region, the forest is also home to many species of reptiles. Common species include black-tailed rattlesnake and rock rattlesnake. However, the Gila monster and Arizona coral snake are less present. The waterways of the forest are home to brown trout, rainbow trout, Gila trout, bass, and catfish.

The land within Gila National Forest has a history of human inhabitation that dates back long before the period of European colonization. The land is part of the traditional territory of the people of the Mogollon culture, who were an Indigenous peoples that lived through present day Arizona, New Mexico, and northern Mexico.

The Mimbres people of the Mongollon culture also lived within the boundaries of the modern day Gila National Forest. The Mimbres inhabited the region until about 1150 CE. There are a number of Mimbres cliff dwellings within what is now the Gila Wilderness.

The region that is now part of the Gila National Forest was likely first visited by people of European descent during the seventeenth and eighteenth centuries. The Spanish colonized large swaths of what is now New Mexico, establishing a number of missions and ranches in the area.

During this time, the Spanish established a number of copper mines in the region. However, the land was ceded to Mexico after the Mexican War of Independence.

In the 1840s, the land was ceded to the United States. Afterwards, it became a popular destination for settlers, both from the United States and from Mexico. Many of the region’s contemporary villages were formally established in the late 1800s.

By the end of the nineteenth century, much of the region’s forested land had been cleared by loggers and other businesses. In an attempt to protect the region’s resources, the US government established the Gila River Forest Reserve in 1899.

This reserve later became the Gila Forest Reserve in 1905. Gila National Forest was eventually created in 1907, though a number of parcels of land have been added to the forest over the years. In 1924, the Gila Wilderness was established within the forest boundaries, making it the first wilderness area within the National Forest System.

Gila National Forest is home to numerous trails and hiking opportunities. Here are some of the top hiking areas to visit in the park:

The first section of the trail is fairly exposed with gradual switchbacks before reaching the fork of Little Bear Canyon and Middle Fork. From there, the trail has over a dozen river crossings en route to the hot springs. Along the way, sheer rock faces tower above the creeks and forested areas found at higher elevations.

The Dragonfly Trail is a popular route within the Gila National Forest. The loop trail totals 3.4 miles (5.5 km) in length with just 226 ft (69 m) of elevation gain.

There are a number of cultural areas and rock slabs with petroglyphs about halfway along the route amidst the desert landscape. Cacti and small shrubs dot the landscape allowing hikers views of the rolling scenery.

Please note that the petroglyphs and other cultural artefacts found along the trail are protected areas that hold high levels of spiritual and cultural significance for local tribal nations. Visitors are expected to follow the principles of Leave No Trace when visiting cultural sites. Please do not alter, touch, or otherwise disturb these important cultural remains.

True to its name, this popular route travels along narrow slabs of rocks that look a lot like catwalks and bridges on its path over Whitewater Creek. The route also travels under rock arches and through forest sections, providing a diverse array of landscapes, despite its relatively short length.

Looking for a place to stay near Gila National Forest? Here are some of the best cities and villages to check out in the region:

The closest city to Gila National Forest is Silver City, which is home to around 10,000 people. It has a long history of copper mining that dates back to the arrival of the Spanish conquistadors in the seventeenth through nineteenth centuries.

Today, Silver City is home to a thriving arts scene and it hosts many festivals each year. The city’s close proximity to Gila National Forest and its many recreation opportunities have helped it grow into a premier tourist destination in southwestern New Mexico.

Located an hour north of Silver City lies the city of Albuquerque. With a population of around 560,000 people, Albuquerque is the largest city in the entire state of New Mexico. Each year, the city hosts the International Balloon Fiesta, which is the world’s largest gathering of hot air balloons.

The Sandia Peak Ski Area is also located near to the city and it provides year-round outdoor activities. The Sandia Peak Tramway is the second-longest passenger aerial tramway in the Americas. Albuquerque is also home to the New Mexico Museum of Natural History, a thriving music scene, and fantastic local cuisine. 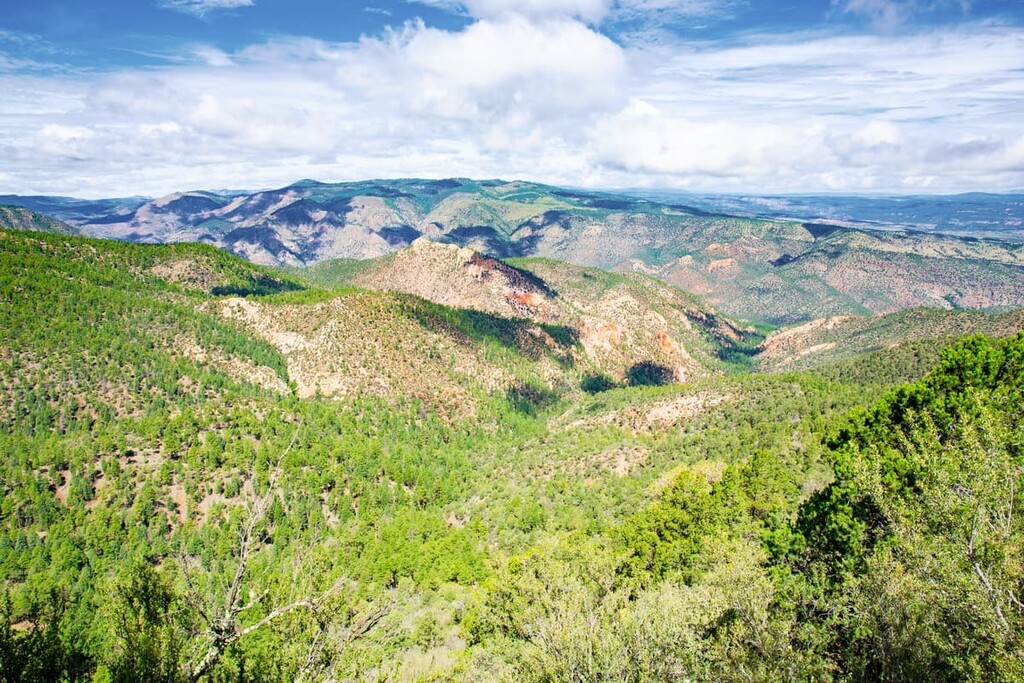 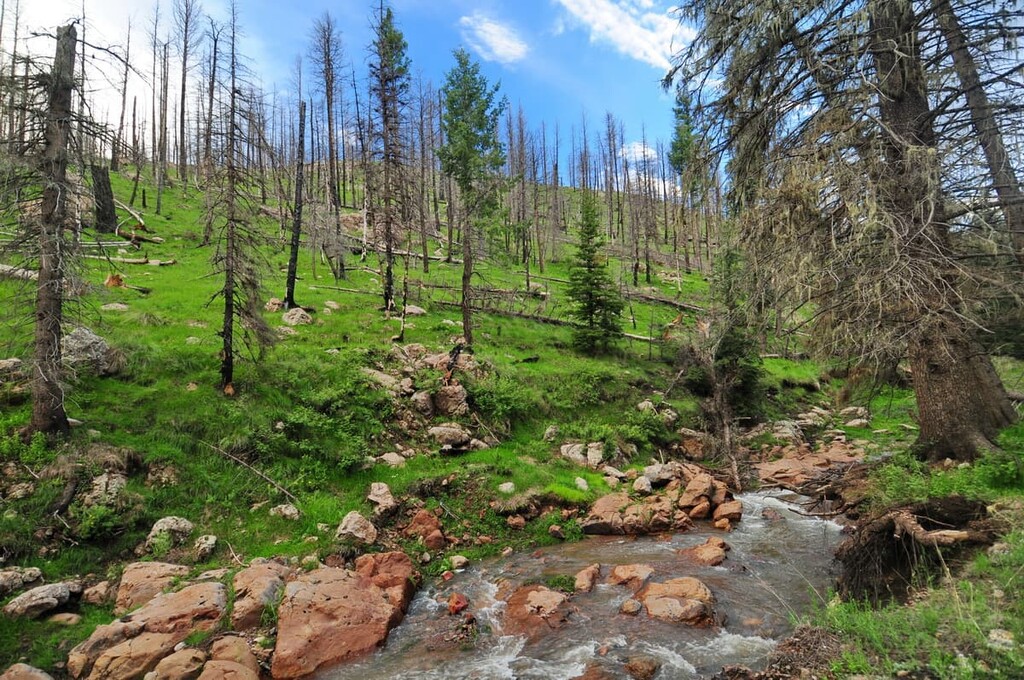 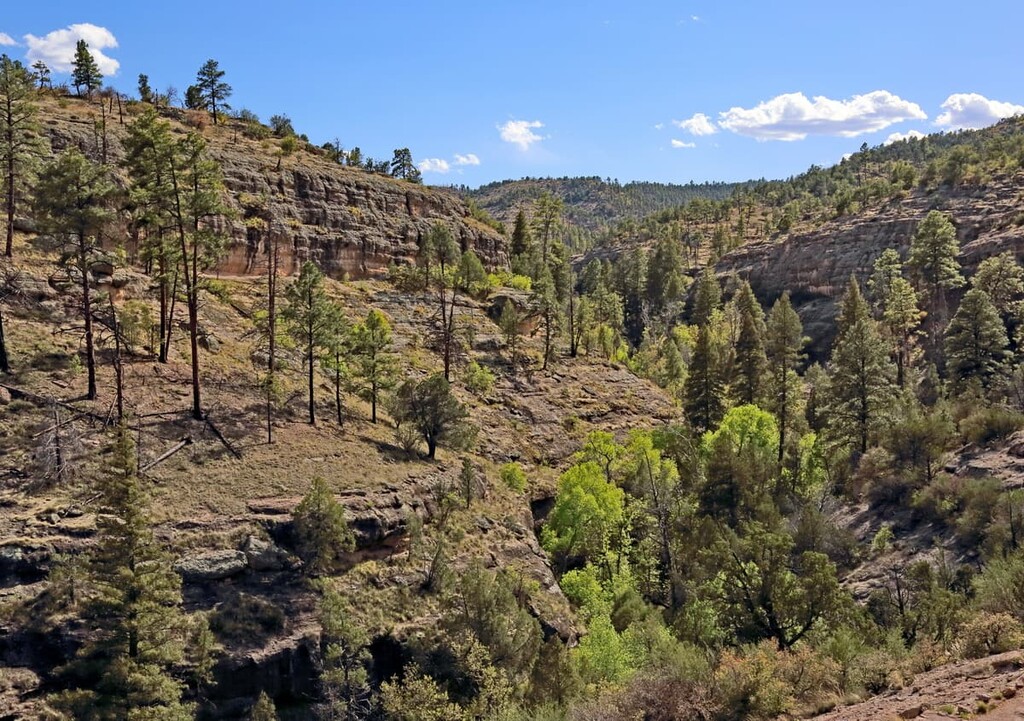 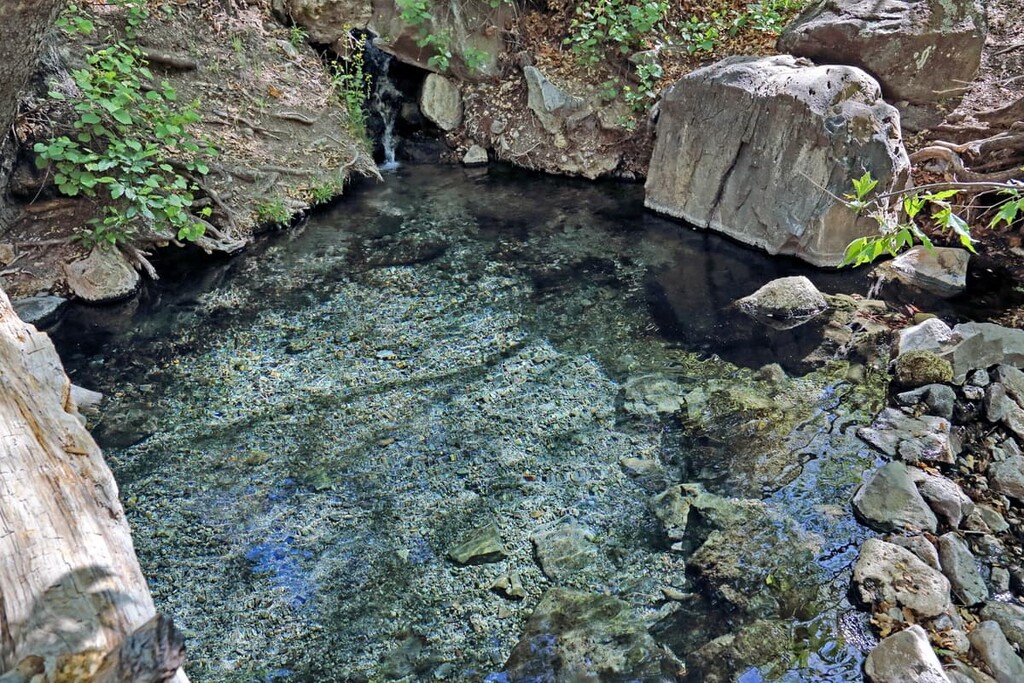 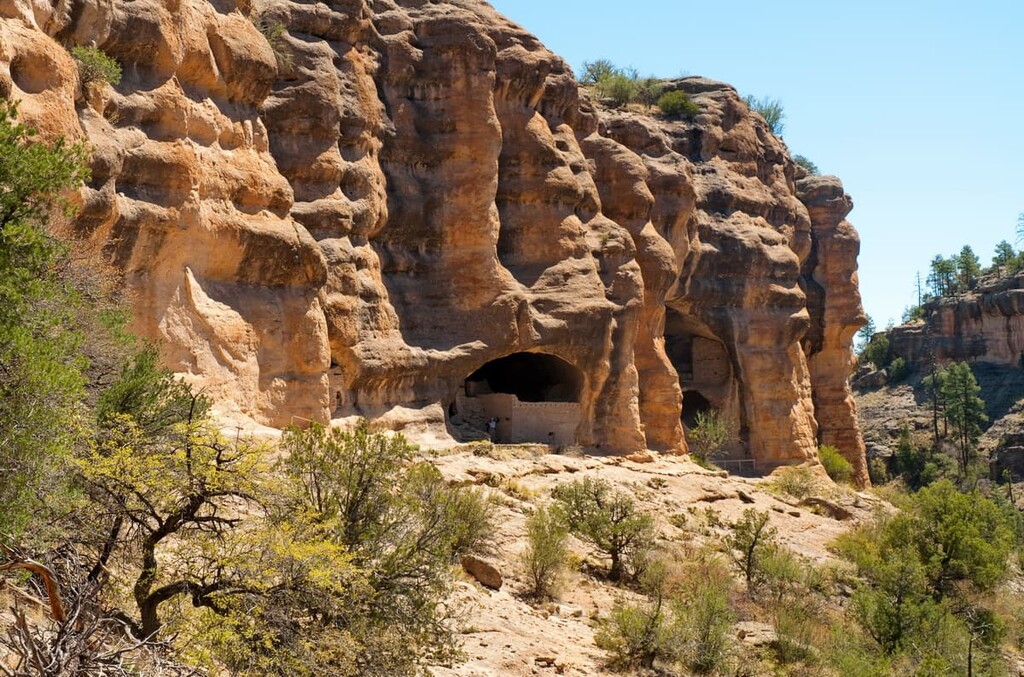 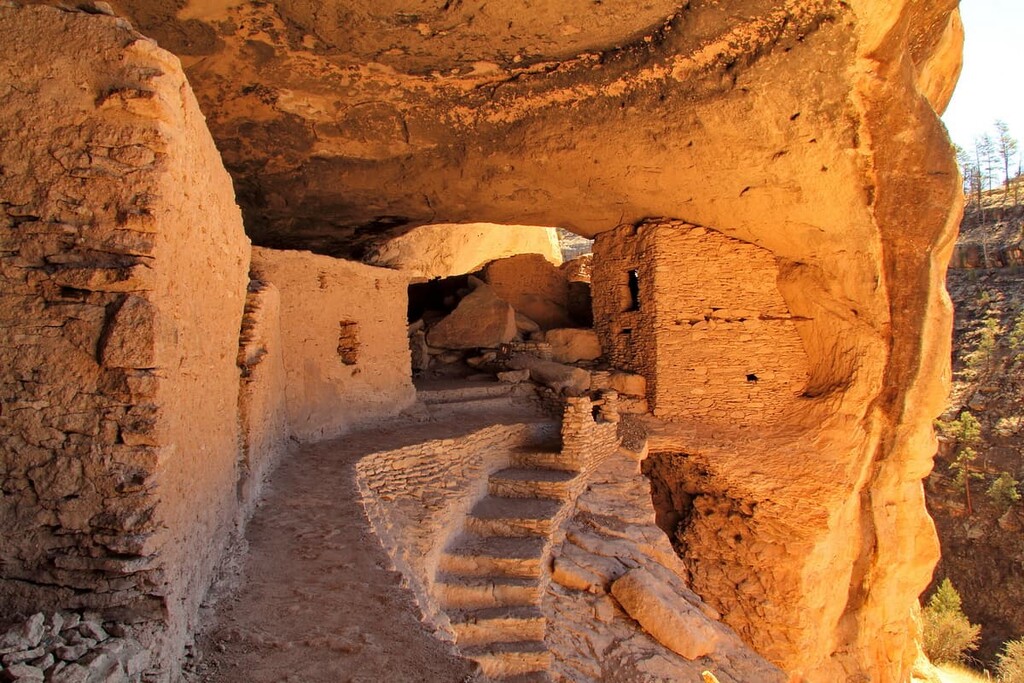 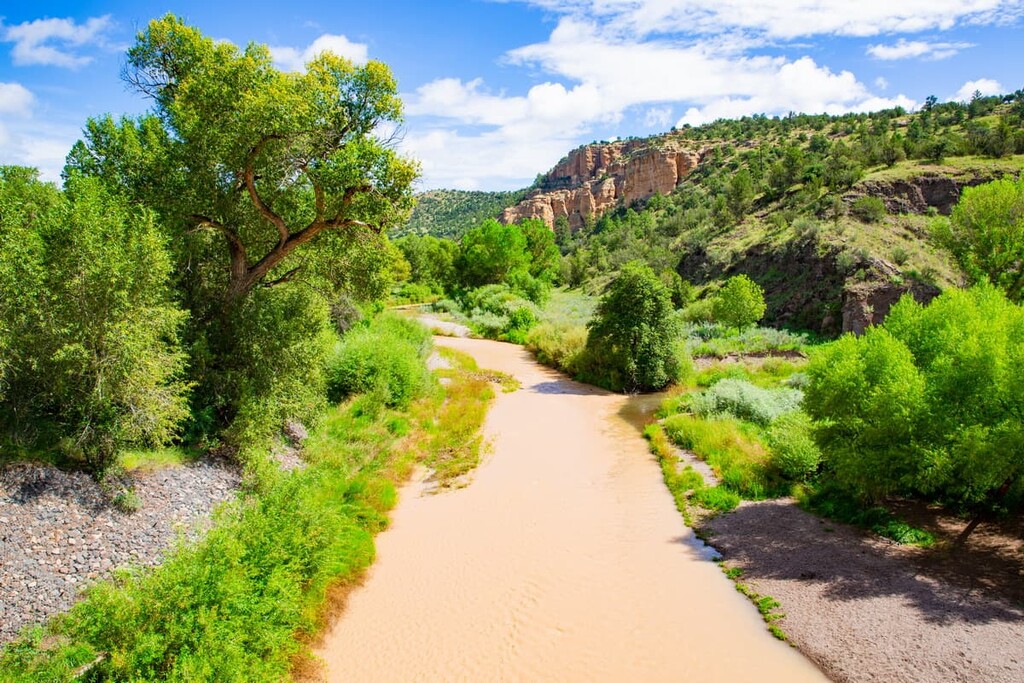