608 m
Prominence
Peak’s prominence is the least
vertical to be covered to get from the
summit to any other higher terrain.

35.961111 N   -105.649444 W
Nearest Higher Neighbor
Truchas Peak - 17.7 km NE
El: 3 990 m / Prom: 1 215 m
Location
35.832577 N  -105.758309 W
Ranges
Parks
Santa Fe Baldy
Santa Fe Baldy is a prominent summit in the Sangre de Cristo Mountains of New Mexico, United States, located 15 mi (24 km) northeast of Santa Fe. There are no higher mountains in New Mexico south of Santa Fe Baldy. It is prominent as seen from Los Alamos and communities along the Rio Grande in northern New Mexico, but is relatively inconspicuous from Santa Fe, as its north-south trending main ridge line is seen nearly end-on, disguising the size of the mountain. Tree line in the Sangre de Cristos is unusually high (exceeding 12,000 feet (3,700 m) in places) and only the top 600 to 800 feet (180 to 240 m) of the mountain is perpetually free of trees, but several severe forest fires have created bare spots extending to lower elevations. An extensive region of aspen trees on its flanks produces spectacular orange-yellow coloration during the fall that is the subject of many photographic studies. Santa Fe Baldy rises in the Pecos Wilderness within the Santa Fe National Forest, on the water divide between the Rio Grande and the Pecos River. The western slopes are drained by the Rio Capulin and the Rio Nambe, both flowing to the Rio Grande. The eastern side of the mountain consists of two small cirques, one containing Lake Katherine, one of the highest lakes in New Mexico at elevation 11,745 feet (3,580 m). Lake Katherine was given its name by theoretical physicist J. Robert Oppenheimer The peak is accessed by Trail 251, the Skyline Trail, which climbs to a saddle about 1,000 feet (300 m) below the summit; the remaining distance is covered by a steep unofficial trail along the ridgeline. Under good conditions the summit is a simple "walk-up" climb, but the Sangre de Cristos are unusually prone to lightning, and during the summer months, the wise hiker is off Santa Fe Baldy and other high summits in the range by noon, to avoid afternoon thunderstorms. Nearby peaks include Lake Peak, 12,409 feet (3,782 m) and Tesuque Peak, 12,043 feet (3,671 m), both located about 3 miles (4.8 km) to the south of Santa Fe Baldy. Santa Fe Ski Basin is on the western slopes of Tesuque Peak. On 11 June 2009, Santa Fe Baldy was the scene of a helicopter accident that claimed the life of New Mexico State Police Sergeant Andrew Tingwall and University of New Mexico graduate student Megumi Yamamoto. The helicopter crashed after Tingwall rescued Yamamoto. Yamamoto had been hiking with her boyfriend, but had become lost. 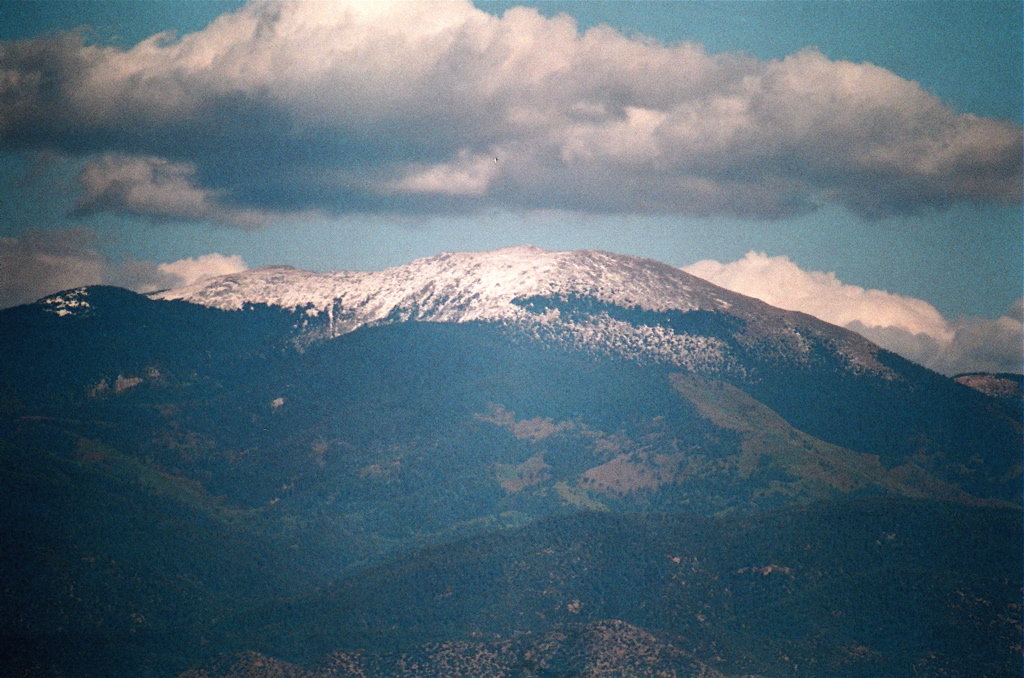 Check out 3D model of Santa Fe Baldy. This is a preview. High-resolution model can be found in the PeakVisor mobile app.
Do you have photos of Santa Fe Baldy or know something about it? Please let us know!