Kalkalpen National Park is a national park located in Upper Austria within the Northern Limestone Alps. It contains over 20,825 hectares (51,460 acres) of land and it is home to one of the largest forests in Europe. The park contains 137 named mountains, the highest and most prominent of which is Hoher Nock (1,963 m/6,440 ft). 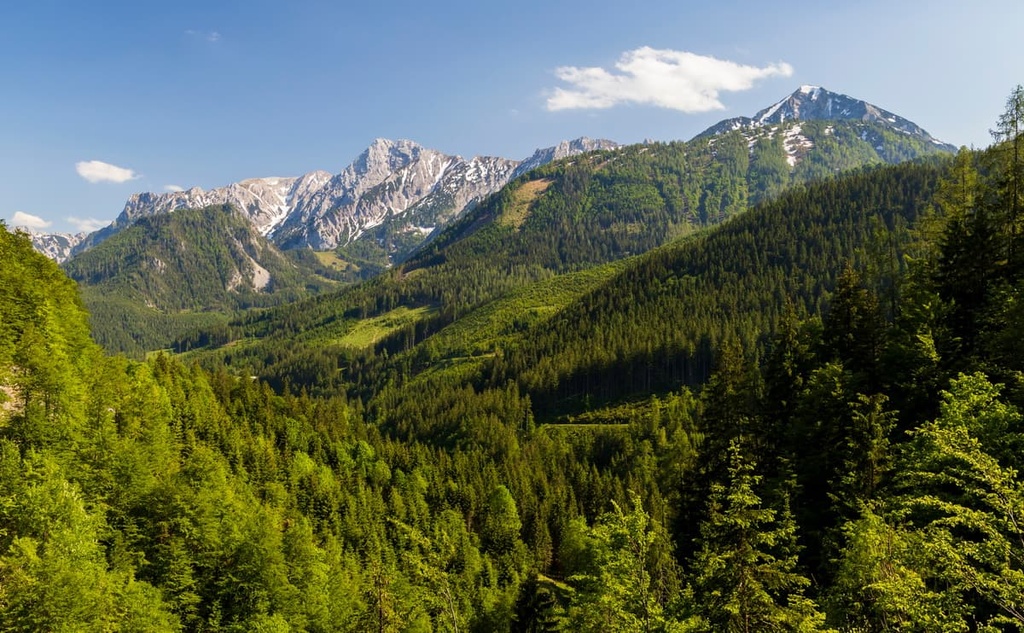 Kalkalpen National Park (Nationalpark Kalkalpen) is located in the state of Upper Austria in the north-central part of the country of Austria. Rosenau am Hengstpaß, Roßleithen, Weyer, Großraming and St. Pankraz are some noteworthy towns located in the area surrounding the park.

So far, over 70 caves have been discovered in the Kalkalpen National Park. The most extensive cave system in the national park is Klarahöhle, which was found in 2004. The deepest cave is located in the Krestenbergschacht, which drops 412 m (1,351 ft) from its entry point at 1,165 m (3,822 ft) above sea level.

Only experienced cave explorers can access the ice caves that are located in the park. The impressive Eiskapelle is situated in the Sengsengebirge. It consists of a 60 m (197 ft) long, 30 m (98 ft) wide hall and is about 6 m (20 ft) high. This beautiful cave is also called the “Devil's Chapel” and it is famous for the great pillar of ice that lingers in the middle of the hall until autumn.

The highest peak in the park is the Hohe Nock at an impressive 1,963 m (6,440 ft) in elevation. Wetterstein limestone and dolomite are the primary rock types in Kalkalpen National Park.

Approximately four-fifths of the park is forested, with a mixed forest of spruce, fir, and beech trees dominating. Additionally, there are about 800 springs and over 200 km (124 mi) of streams that can be found in the national park area.

The National Park Society is based in Molln, with visitor centers in Reichraming and Windischgarsten. These visitor centers offer an extensive array of informational materials, events, and exhibitions.

The high alpine mountain ranges of Kalkalpen are called Kalkhochalpen, which roughly translates to the “High Limestone Alps.” Located in the Northern Limestone Alps under the AVE classification system, these peaks almost reach the 3,000 m (9,842 ft) mark and are home to glaciers.

These peaks are of vital economic importance because they provide a source of drinking water for the area. They also contain many accessible caves that help drive tourism to the region.

The most significant mountain groups of the Northern Limestone Alps and Central Eastern Alps include:

Meanwhile, some of the most significant Southern Limestone Alps mountain groups include:

The Southern Limestone Alps are positioned in front of the main Alpine ridge of the Eastern Limestone Alps to the south. They consist of several mountain ranges, which together are approximately 450 km (280 mi) in length. They extend over parts of Austria, Italy, and Slovenia.

The Western Kalkalpen are also known as the French Limestone Alps. Formed by a group of mountains in the western Alps, they stretch from the Swiss canton of Valais via the departments of Savoie, Haute-Savoie, and Isère in the region of Provence-Alpes-Côte d'Azur in France.

The mountain and landforms of the Limestone Alps are very diverse. In Kalkalpen, the landscape is primarily dominated by large karst formations, which include the major cave systems that are found in the area.

Kalkalpen is a particularly biodiverse part of Upper Austria. The park contains around 30 mammals, 80 birds, and 1,500 butterfly species as well as over 1,000 different types of flowering plants.

Some of the endangered mammal species found in the park include otters, dormice, and numerous bat species. There are also records of brown bears, lynxes, and beavers in Kalkalpen.

Of the over 850 documented plant species in the park, 102 are on the Red List of Endangered Plants in Upper Austria. These include:

Archeologists have uncovered evidence of settlements in the national park that date back as early as the Stone Age. Artifacts from Stone Age hunters from between 18,000 and 10,000 BCE were found in the area, including several axes and a lance tip from around 1000 BCE.

The Reichraming Forest Railway, which runs through the national park region was created in the interwar period and was in operation until the early 1970s.

Plans for a national park in the Reichraminger Hintergebirge forest area of Upper Austria were discussed as early as 1983. The actual planning was conducted in 1990, and in 1996 the Upper Austrian state parliament passed a law that approved the creation of the park.

In July 1997, the national park was formally established. In the same year the IUCN (International Union for Conservation of Nature), officially recognized it as a Category II Protected Area.

Kalkalpen is the perfect place for any mountain lover. It offers an abundance of hikes for trekkers of different skill levels to enjoy. Here’s a look at some of the most interesting hikes in the park that you can check out during your next visit.

This stunning 150 km long-distance hiking trail leads past the most beautiful places in and around the Kalkalpen National Park.

Another picturesque hike is a tour to the Wasserklotz, which provides a great view into the wooded Reichraminger Hintergebirge, the Haller Mauern, and the summits of the Gesäuse National Park.

This hike will take you about 4 hours of walking time. However, this hike is best for trekkers with a good amount of previous experience.

The Großer Priel Trail is a steep hiking path that leads to the Prielschutzhaus and up to approximately 2,000 m (6,560 ft) in elevation.

From there, you continue up the ridge of Großer Priel until you reach the summit. This section is very demanding even though it is equipped with ropes and the trail is well-marked. Prior mountaineering experience is highly recommended for anyone considering this trail.

This trail around Stefflkogl and Schöneck is a 17.7 km (11 mi), relatively quiet loop that’s located near Reichraming, Upper Austria. It runs along a river, and through forests with beautiful wildflowers.

Due to its steepness and distance, this route is fairly challenging and is only recommended for experienced hikers.

It leads to a lake and there is often wildlife in the area. Due to the steepness and distance of this trail, it is only recommended for experienced hikers.

Kalkalpen National Park features some of the most amazing views in the region. Here are some of the other attractions that you can check out during your next visit to the national park.

The Kalkalpen area is not only home to beautiful mountains, animals and plants as it also encompasses some interesting towns and cities. Here are some of the best cities and towns to check out before and after your visit to the national park.

Salzburg is famous for its beautiful old town center, its musical history and the beautiful nature surrounding the city. It offers plenty of opportunities for culture and nature lovers alike. It is located approximately 2 hours by car from Kalkalpen National Park. You can fly to Salzburg International Airport and drive to the park through beautiful scenery.

Linz is the capital of Upper Austria and home to some of Austria's best universities. It is popular amongst students and known for its vibrant music and event scene. Linz is definitely worth a visit when you get a chance.

Linz International Airport is easy to get to and the city is only around one and a half hours drive from the Kalkalpen National Park.

Vienna, the capital of Austria is a must see for every culture lover. The architecture of the impressive buildings all around the city, the numerous monuments and famous churches, classical and contemporary art and music events and a fantastic coffee shop and bar culture.

This city leaves nothing to be desired. It is popular amongst visitors of all backgrounds, and it offers plenty of things to do and see for every taste.

Vienna International Airport is also Austria's most important airport, so it offers great connections from major cities around the world. The city is located approximately 3 hours by car from Kalkalpen National Park.

Steyr is the gateway to the Enns and Steyrtal valleys. Two rivers, Steyr and Enns, meet in the town and eventually form the river Enns, which flows into the Danube.

Steyr's old town, which contains a town square and a Gothic parish church, is well worth seeing. The most prominent buildings on the town square are the Gothic Bummerlhaus, which is the town's most famous landmark.

Located on the edge of the Kalkalpen National Park, Molln is home to the National Park Center. It is located in the Traunviertel region in the narrow valley of the Upper Austrian river Steyr. The community belongs to the Kirchdorf district and is close to Steyr.

The town is known for its maultrommel (mouth harp) manufacturing industry. In Molln, you can even visit a museum dedicated to this instrument. Aside from the museum, Molln also features a number of old churches that are worth a visit. 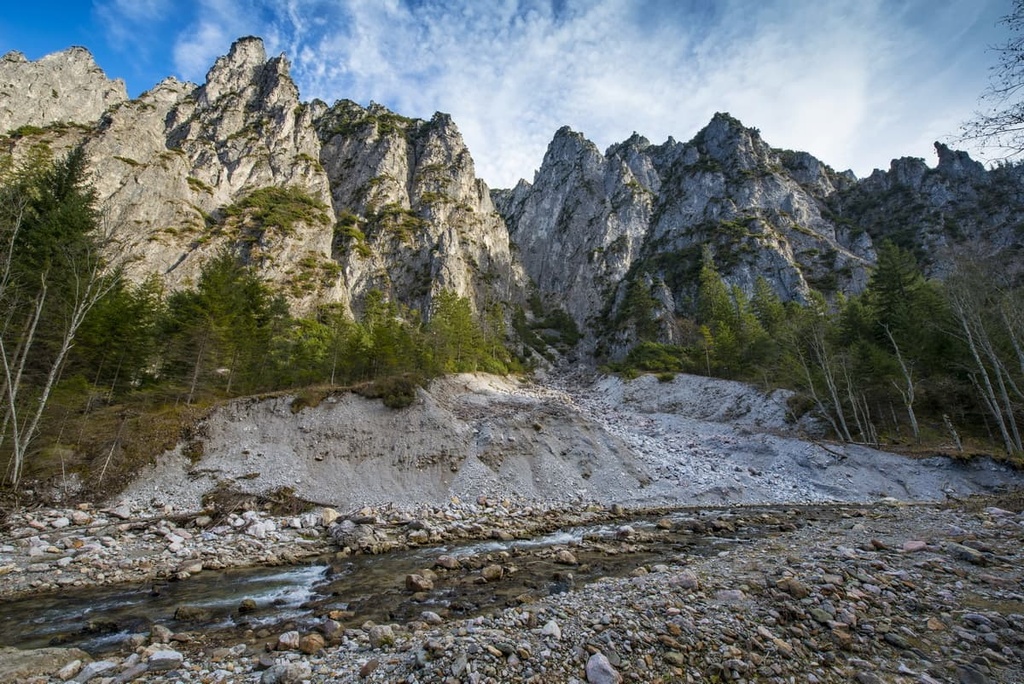 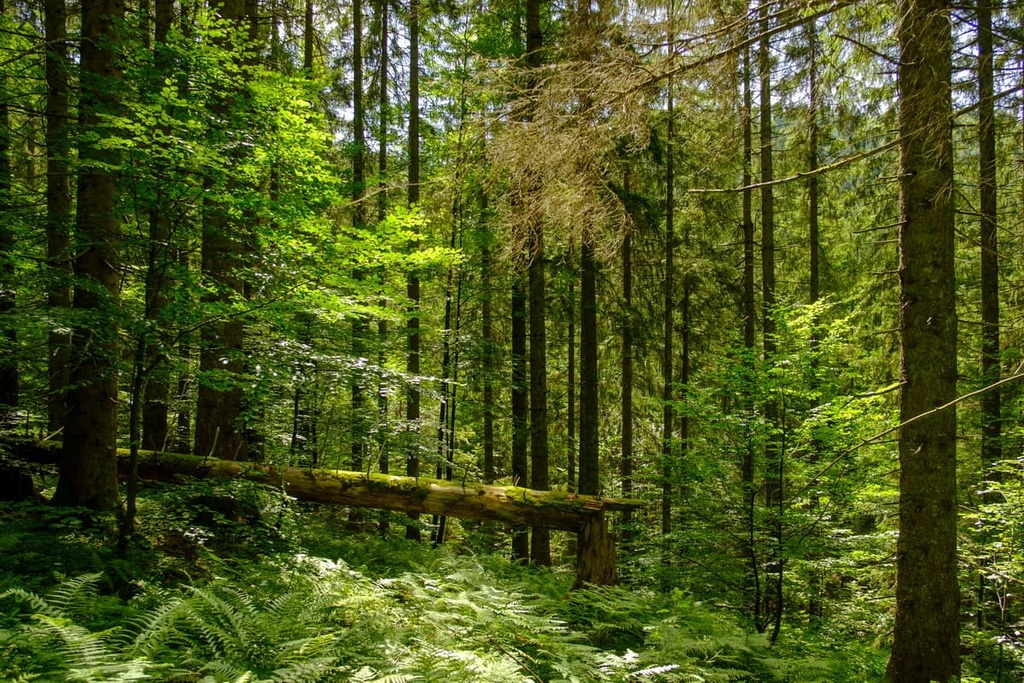 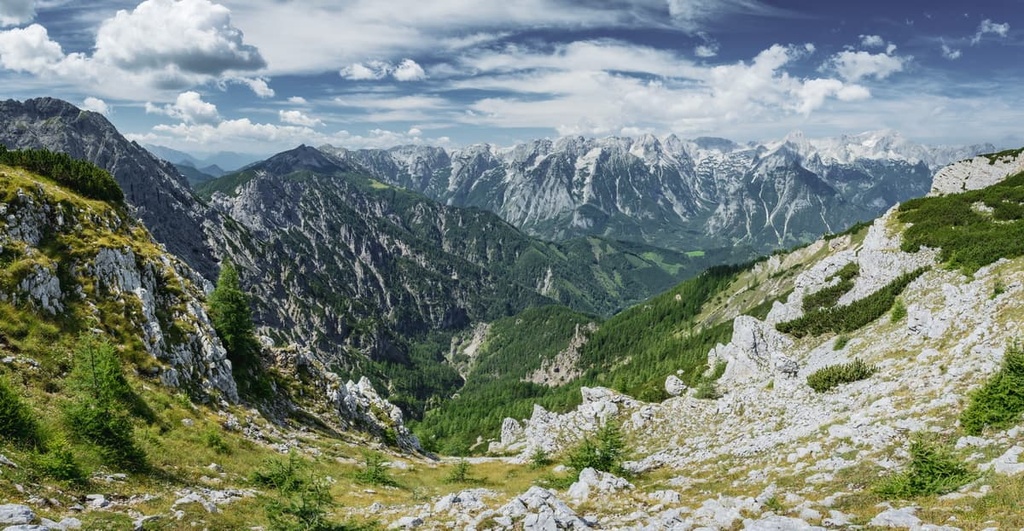 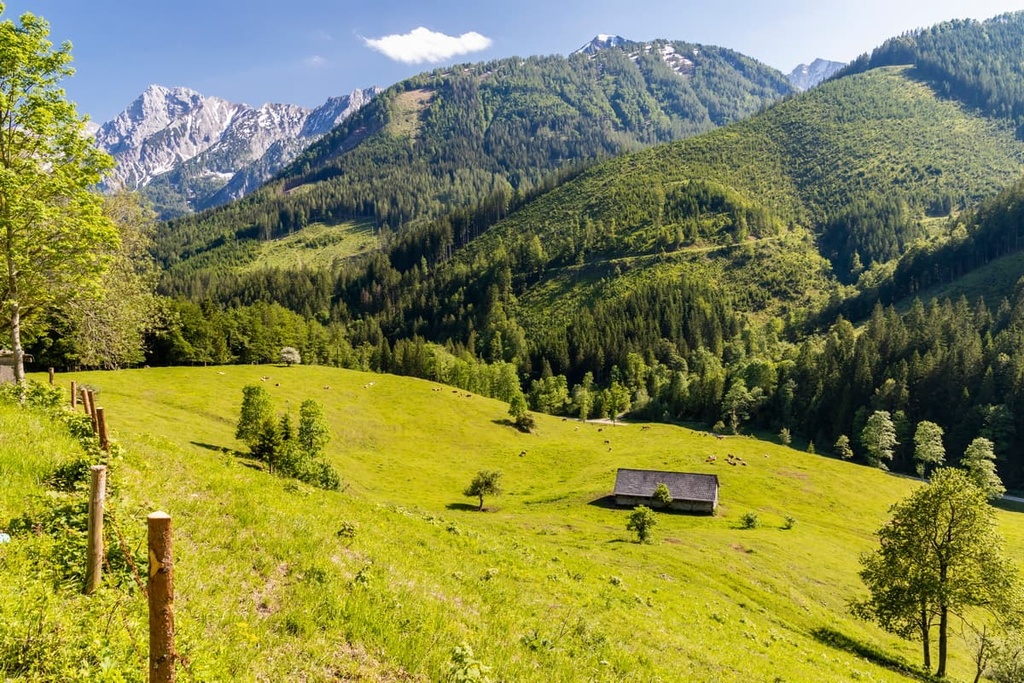 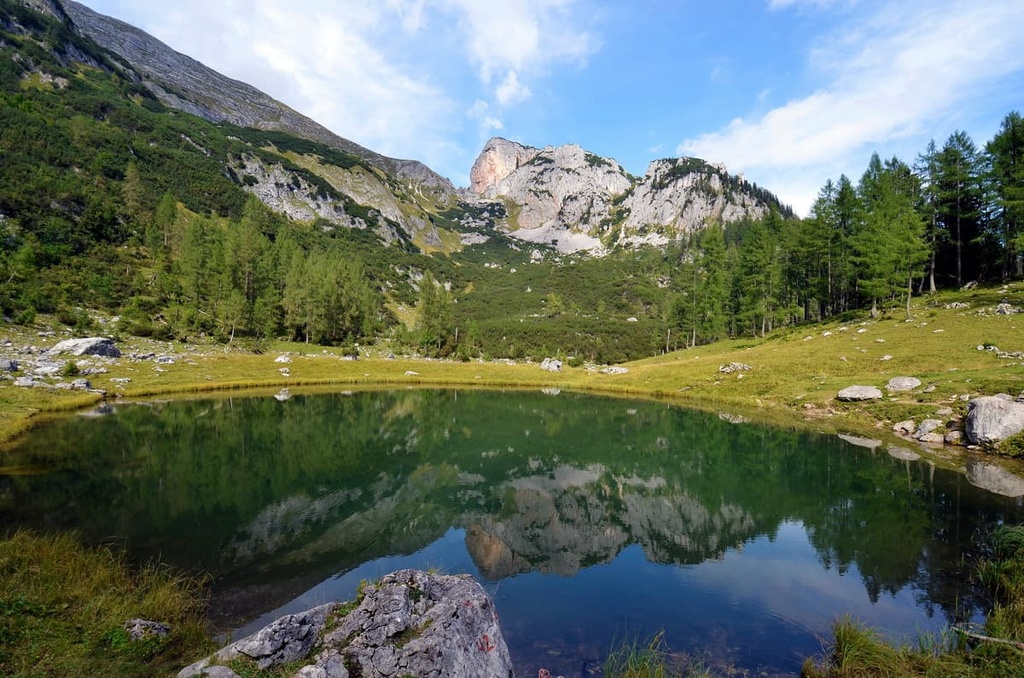 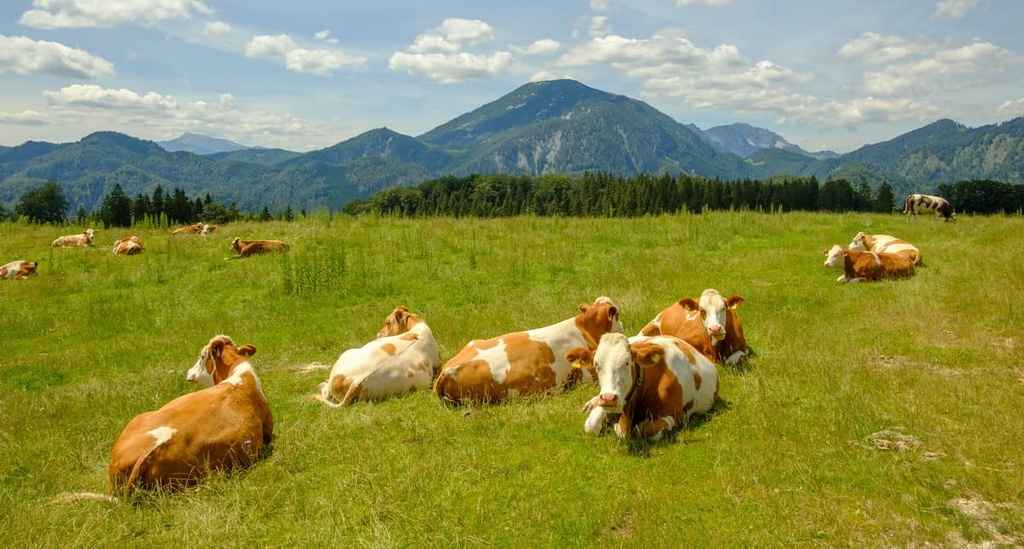