Located in east-central Asia, the Tibet Autonomous Region is a large, high-elevation region known for its stunning mountain landscapes and rich cultural heritage. Tibet contains 1121 named mountains, the highest and most prominent peak in the region is Mount Everest (Chomolungma), the world’s highest peak at 8,848 m (29,032 ft) in elevation. 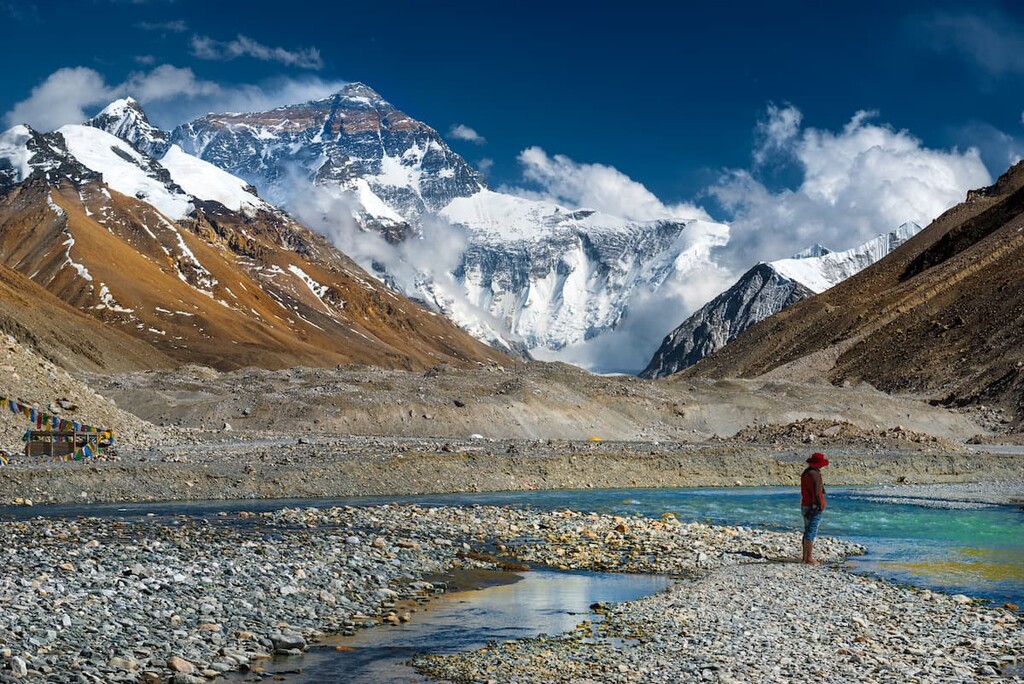 The region of Tibet (officially the Tibet Autonomous Region/Poi Ranggyong Jong) is situated on the Tibetan Plateau, east of the Central China plain. Sitting on the western edge of China, Tibet is sometimes referred to as being part of both eastern and central Asia.

The Tibet Autonomous Region is bordered to the north and east by the provinces and autonomous regions of Sichuan, Qinghai, and Xinjiang, and to the southeast by Yunnan Province. It is also located to the north of Nepal, Bhutan, Myanmar, and India, though China does also claim parts of the Indian state of Arunachal Pradesh as part of Tibet and the border with the union territory of Ladakh is also a matter of some international dispute.

Due to the fact that Tibet’s borders are disputed, determining a precise area and size for the land called Tibet is difficult. However, the Tibet Autonomous Region, which is claimed by China, has a total area of 1,228,400 square kilometers (474,300 square miles), making it the second largest administrative subdivision in China after Xinjiang and before Inner Mongolia.

That being said, Tibet is a sparsely populated area with an average population density of just 3 people per kilometer (7.7 per square mile), ranking it second to last in terms of population density in China’s administrative subdivisions.

Average elevations in Tibet sit at around 4,572 m (15,000 ft), though they also extend up to the summit of Mount Everest. Geographically, Tibet can be divided into two distinct regions: the lakes region in the west and the river region, which almost completely surrounds the lakes region on three sides.

The “Lakes Region” of Tibet spans from Pangong Tso Lake located in Ladakh, near the source of the Indus River, to the sources of the Salween, Yangtze, and Mekong rivers. Other lakes located on the western edge of the region include Lake Rakshastal, Lake Manasarovar, and Yamdrok Lake.

Despite its name, the Lakes Region is actually characterized as an arid and windswept desert. This landscape is also referred to as the Changtang as well as the Northern Plateau by the Tibetan people.

The Lakes Region has a total area that’s roughly equal to that of France and it spans a distance of about 1100 km (700 mi), and the high mountains that surround it to the west and south have led the plateau to develop an arid alpine climate. Indeed, annual precipitation in the region totals just 100 millimeters (4 inches). The high mountain ranges are separated by plateaus almost completely free of plant or animal life.

Fertile valleys in the region include those of Lhasa, Shigatse, Brahmaputra, and Gyantse. Within the river region lies the South Tibet Valley, which was formed by the Yarlung Zangbo River and spans 1200 km (746 miles) in length and 300 km (186 miles) in width.

The Tibetan Plateau has been referred to as the “Roof of the World” as it is one of the world’s largest high-elevation plateaus. In fact, elevations in the plateau often exceed 5,000m (16,400 ft).

Furthermore, the geological history of the region is closely intertwined with that of the Himalaya. The Himalaya is a relatively young mountain range and it consists predominantly of sedimentary and metamorphic rocks.

There are four major mountain ranges found throughout Tibet. From north to south these ranges include the Kunlun Mountains, Karakoram Range-Tanggula Mountains, Nyenchen Tanglha Mountains, and the Himalaya.

The Tibetan Plateau is home to a wide variety of plant and animal life, specially in the river region. Over 5,000 species of plants can be found throughout the region despite the high elevations and harsh weather typical of parts of Tibet.

Common plants in the lower elevation regions of Tibet include the giant cypress, picea smithiana, Asiatic longleaf pine, Cyathcaceae, ferns and the mulberry. One of the most well-known plants in all of Tibet is a cypress tree in the Nyingchi Area called the King Cypress. This tree is over 2,500 years old and is a sacred tree to the people of Tibet. The largest forested sections are found in the southeastern region of Tibet.

Some of the most endangered species within Tibet include the Tibetan antelope, Tibetan yak, Bharals, and snow leopards.

The Tibetan antelope, or chiru, is endemic to the region and inhabits regions ranging from 3700 to 5500 meters (12,140 to 18,045 ft) in elevation. However, it is at risk of becoming even more endangered than it currently is due to illegal poaching.

In fact, the chiru is known for its fantastically soft underfur, which is used to make shahtoosh, one of the softest and most expensive wools on the planet. However, shahtoosh imports are illegal in many countries in order to protect the chiru.

It is estimated that the Tibetan Plateau has been inhabited for around 30,000 to 40,000 years. Around 3,000 years ago, Neolithic peoples immigrated to the area from what is now northern China.

By the sixth century CE, the Tibetan Plateau was home to various different kingdoms which formed a unified state around the seventh century. In 763 CE, the powerful kingdom captured the capital of China, Changan.

Prior to Buddhism, the predominant religion of the kingdom was Bon. Later, in the eight century, Buddhism was introduced and the first monastery was built in 779 CE. Afterward, Buddhists were heavily persecuted, the Tibetan region split up into warring states.

During the thirteenth century, the powerful Mongols from what is now Mongolia, conquered Tibet and made Sakya Lama the temporal ruler of Tibet. Sakya Lama also acted as a spiritual advisor to the Mongol Emperor of China. After further rebelling, Tibet became a secular state.

After a civil war in Tibet, the Buddhist leader of the yellow sect was given the title of the Dalai Lama. In the seventeenth century, the Mongols again entered the region and made the Dalai Lama the spiritual leader of Tibet.

Under Chinese control, Tibet became an autonomous region in 1965. Today the Dalai Lama still lives in India and the region is administered by China. Pastoral nomads still make up around 40% of the population of Tibet while many local communities raise livestock and harvest crops.

These days, travel to Tibet is highly restricted. As of the time of writing, only citizens of China (including Hong Kong) can enter the region without a visa. However, non-Chinese travelers must obtain a visa and must pre-arrange a tour to be able to enter the autonomous region.

Therefore, if you’re interested in visiting Tibet, be sure to plan your travels well ahead of time and recognize that independent travel to the region is not possible for international visitors. Nevertheless, there are plenty of fantastic hiking and cultural sites to experience in the stunning region of Tibet.

Located in the very east of Tibet lies the Yubeng to Glacier Lake trail. This route totals 11 km (6.9 miles) in length with 807 m (2647 ft) of elevation gain. The trail winds through the forest up a rocky and steep climb getting above the treeline. The alpine lake sits in a deep basin as Kawagarbo and other peaks tower steeply around the lake.

The Ninong to Yubeng trail is 14.5 km (9 miles) long with 619 m (2,030 ft) of elevation gain, one way. This well-traveled trail winds through the valley with the river flowing below. Steep and rocky cliffs tower on either side mark the beginning of the route. The top of the trail, near Yubeng, is far more remote, offering panoramic views of the valley and river below.

There are numerous guided treks throughout Tibet, with most exploring the Himalaya and the surrounding peaks. Tibet is home to some of the highest elevation treks in the world, including one that leads to Advanced Everest Base Camp on the northern side of the mountain.

Other popular routes include the Gyama Valley Trek, Tsurphu to Yangpachen Trek, Mount Shishapangma Base Camp Trek, and the Gandem to Samye Trek.

All of these treks are led by trained professionals, often along with local guides and porters. Though extremely strenuous, these multi-day treks allow visitors to travel to ancient monasteries and experience the local culture through homestays.

Looking for a place to stay during your visit to Tibet? Here are some of the best cities to check out:

Lhasa, which is translated to mean “Place of Gods,” is the administrative capital for the Tibet Autonomous Region. The city sits at an elevation of 3,656 m (11990 ft), making it one of the highest cities in the entire world.

Lhasa has acted as both the religious and the administrative capital of the region since the seventeenth century and is deeply significant to Tibetan Buddhsit. Today the city is home to around 900,000 people. While the main city is bustling with markets and visitors, the outskirts of the city are home to traditional agricultural practices. The city is connected by the Qinghai-Tibet railway, the tallest railroad in the world.

Potala Palace under the morning sunshine in Lhasa, Tibet

Shigatse is the second most populous city in Tibet and it sits at an elevation of about 3,860 m (12,660 ft). The city lies along the confluence of the Yarlung and Tsangpo rivers. Shigatse is also home to 845,000 people, and, as a result, it acts as a gateway into Nepal and western Tibet.

From Shigatse, visitors have stunning views of Mount Everest towering high above in the distance. Shigatse is home to many landmarks and monuments that hold religious significance. For example,the local Tashilhunpo Monastery was founded in 1447 by the first Dalai Lama and it is still in use to this day.

Located between Lhasa and Shigatse lies Gyantse, a city nestled in the Nyang Chu Valley. This town has a population of around 60,000 and sits on the fertile farming lands of the valley. Today many trekkers pass through the town along the popular trekking route to Shigatse.

Major landmarks in the town include the restored Gyantse Dzong, including its multi-tiered Kumbum. This landmark of the Palcho Monastery was built during the 1400s and still contains over 10,000 religious and cultural murals. 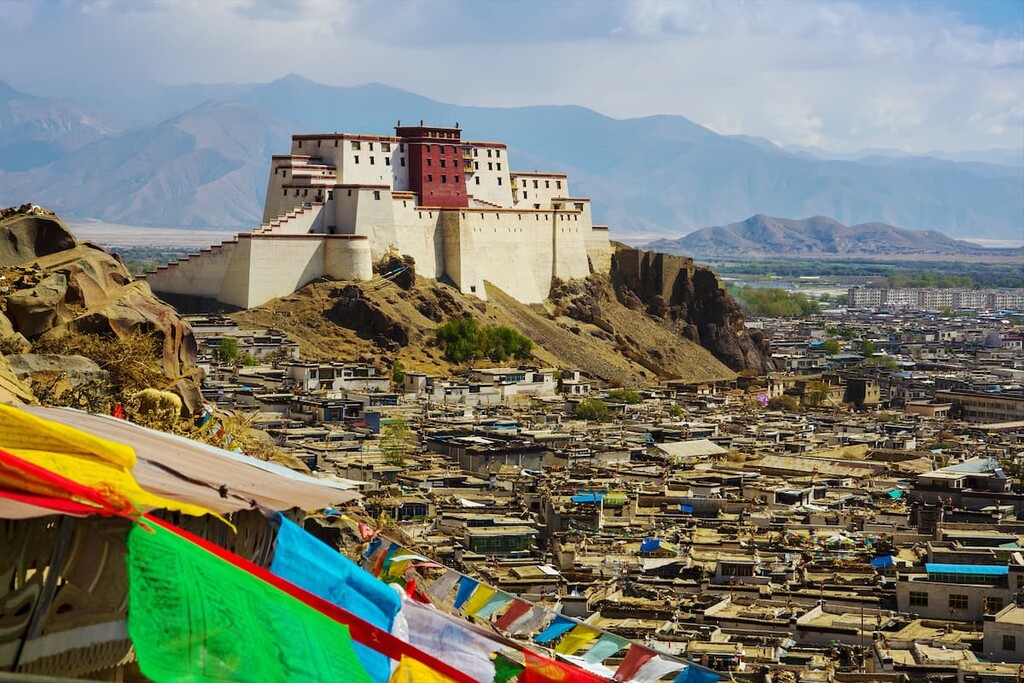 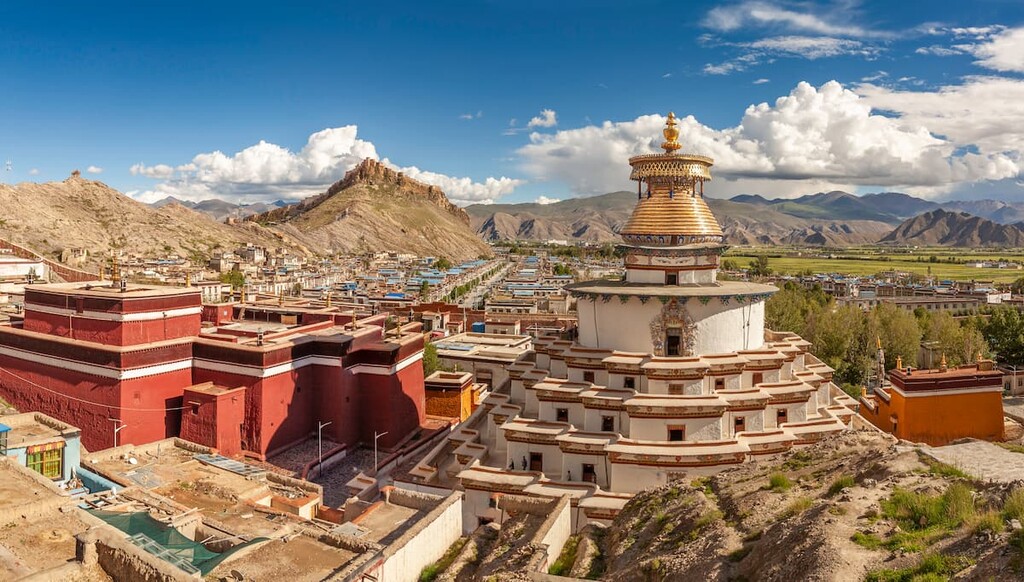 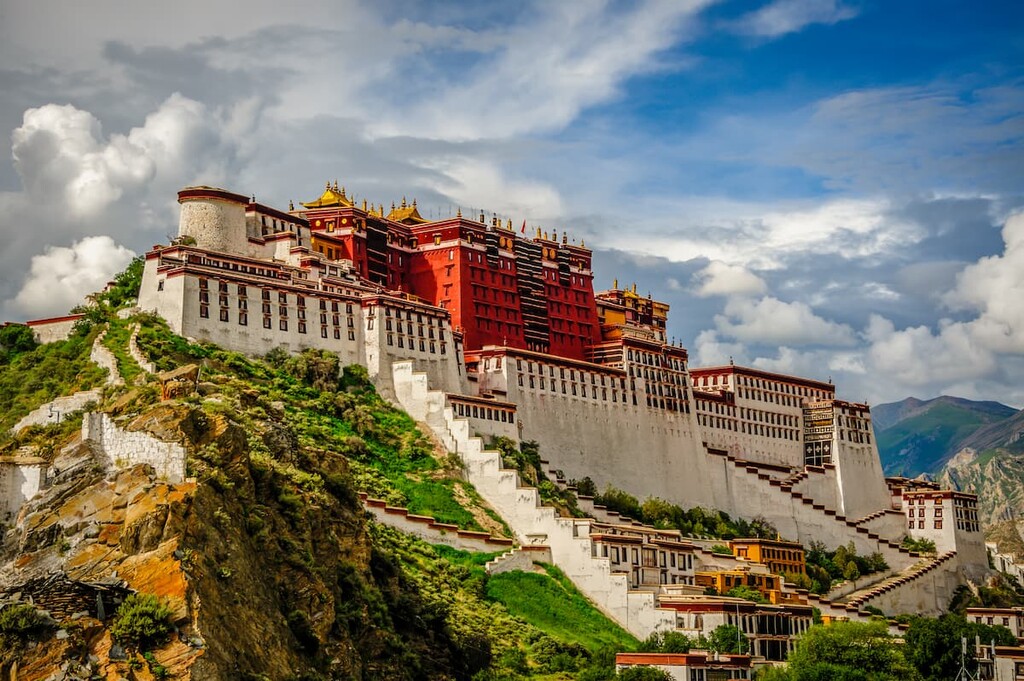 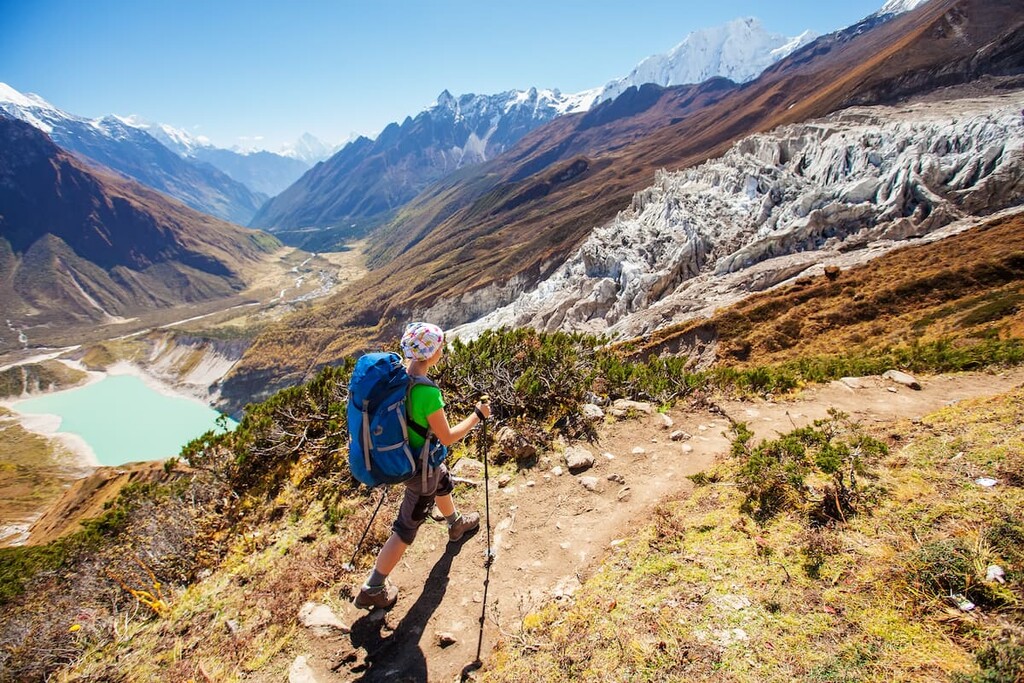 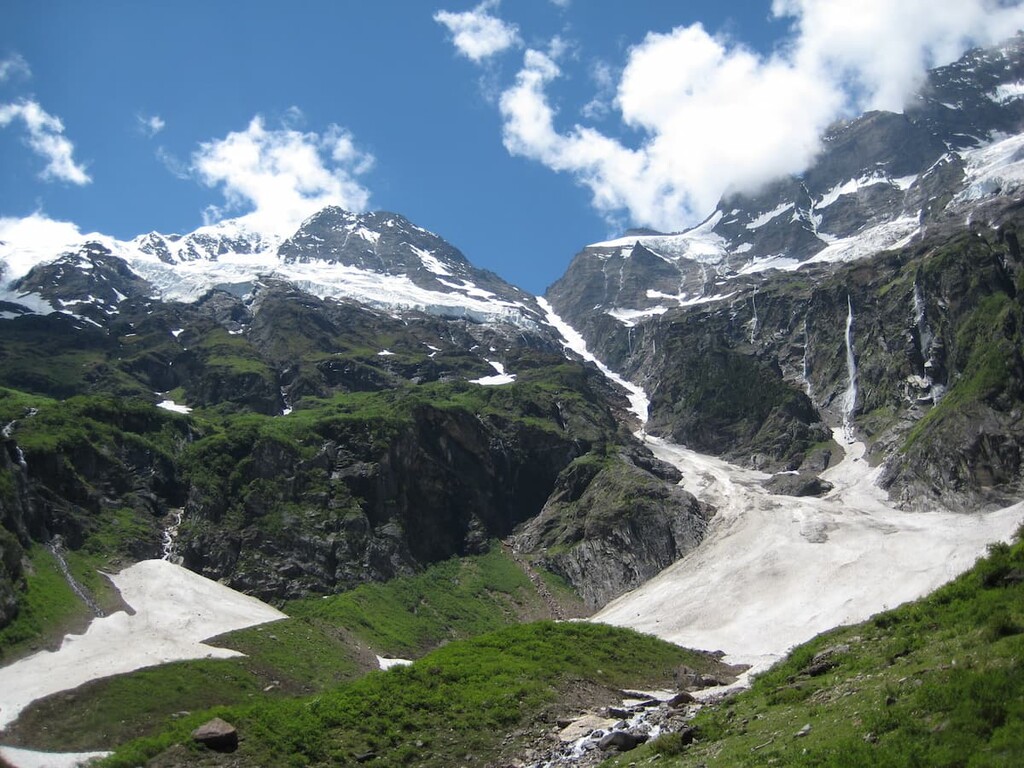 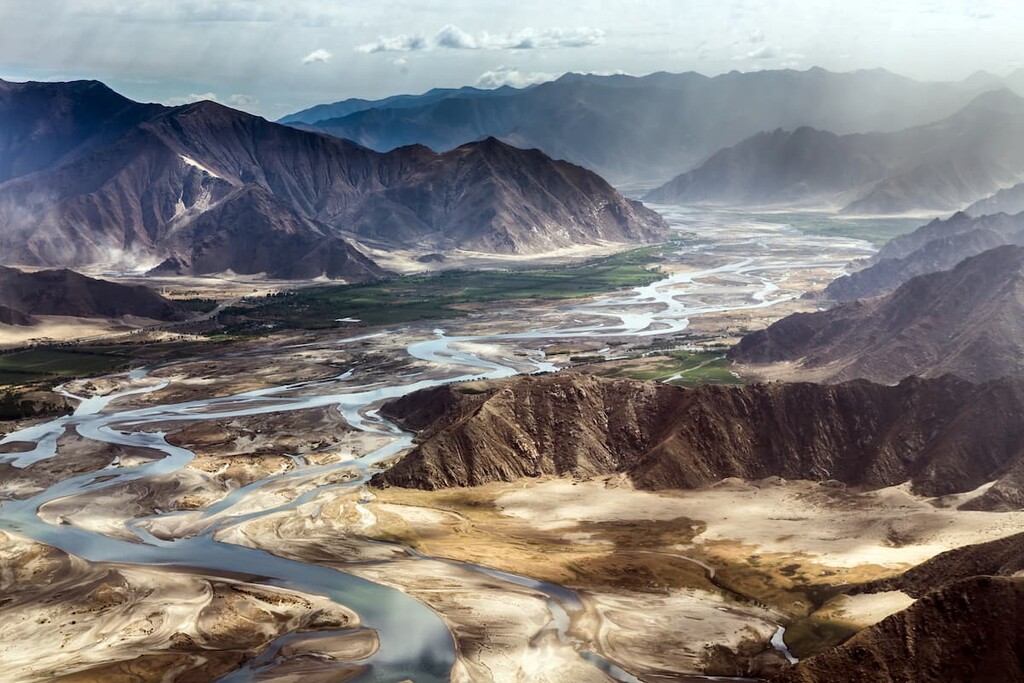 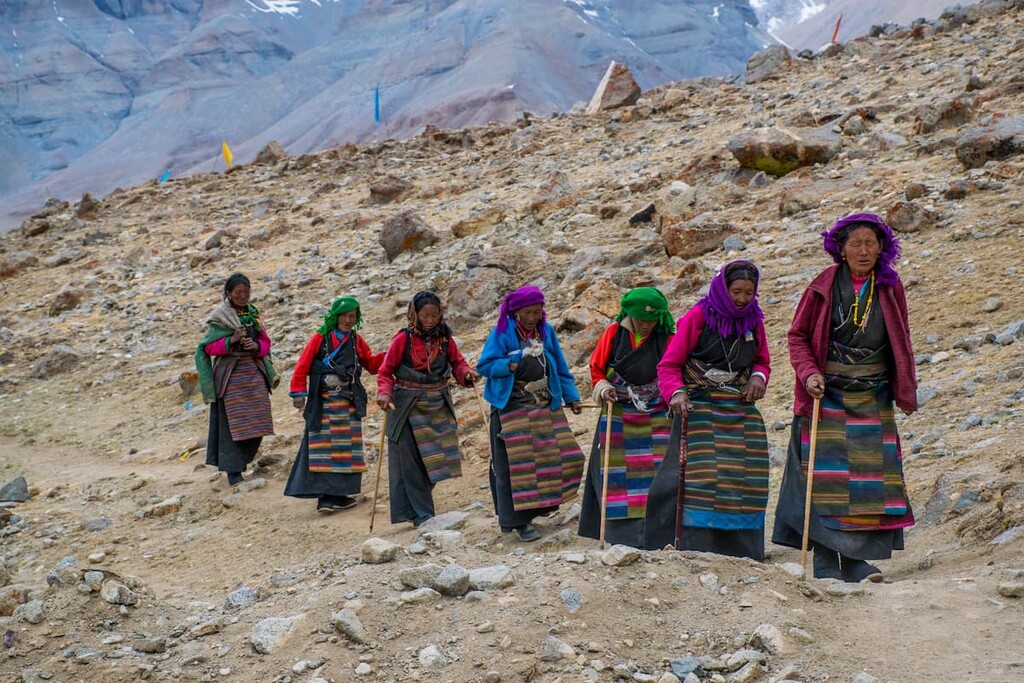