Yunnan
19
Mountains with prominence of 1 ⁠500 ⁠m / 4 ⁠921 ⁠ft or more.
Highpoint

Yunnan (云南), translated as “Southern clouds”, is one of the twenty-three provinces in China, and it’s located on the south-west part of the “Middle Kingdom”. With an extension of 394,000 square kilometres it’s known to be part of the eastern end of the Himalayas, hence the high number of mountains over five and six thousand meters tall. Even Kunming, the capital, is located at 1,900/2,000m above sea level! 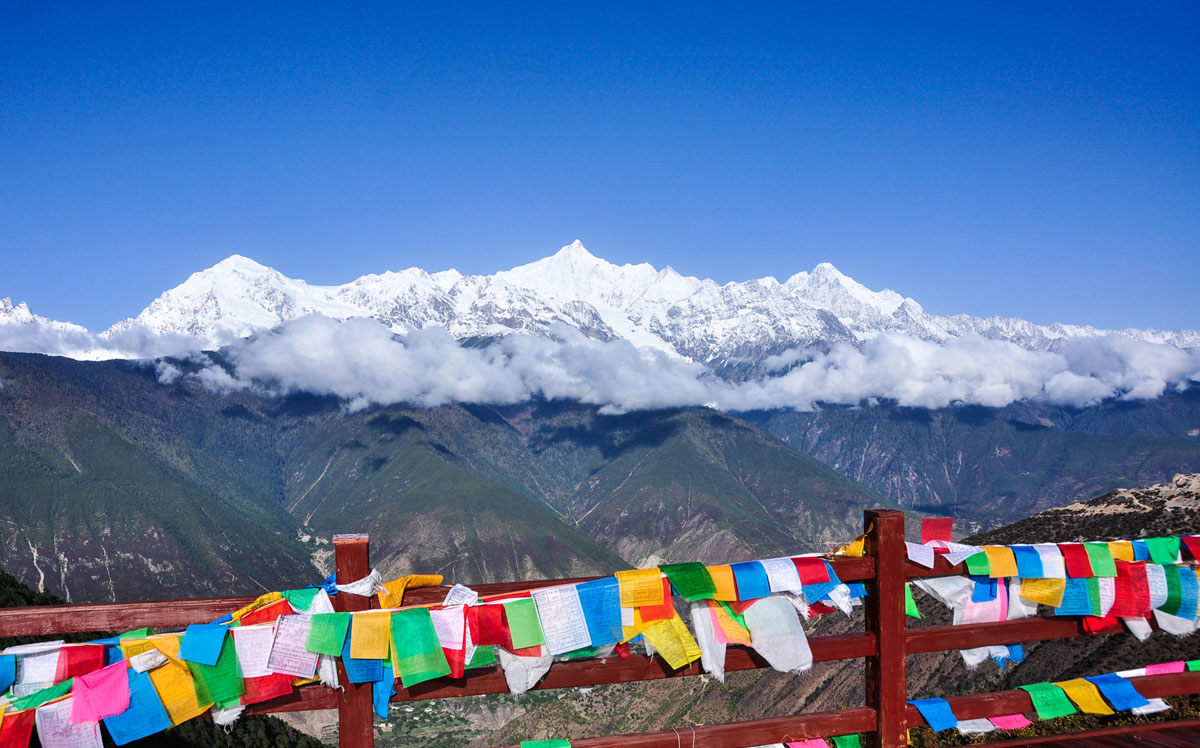 While Kawagarbo with its 6,740 meters above sea level holds the title of the highest mountain in Yunnan, Jade Dragon Snow Mountain (玉龙雪山) is the most famous one due to the good accessibility and the ski resort that lies on its hillside. The character "山” -shan- will be recurrent when looking up mountains because it’s the Chinese word for “mountain”.

This region is characterized by having a large ethnic diversity caused by several immigration waves of Han population coming from the rest of China. Yunnan is home to 26 different Chinese minorities such as the Pumi, Yi or Dai (famous for their extremely spicy, but tasty cuisine). This culture amalgamation resulted in a rich variety of culinary experiences, traditional dresses, ornaments and language dialects. One can find the peculiarities of Yunnan summarized in the 云南十八怪 -Yúnnán Shíbā Guài-, in English “The eighteen oddities of Yunnan”, which includes things like the varied uses of bamboo or quite varied weather phenomena of this province.

Yunnan’s geography is a mountainous one and in order to understand this province’s geography, we can make a clear differentiation between west and east side. The whole region is characterized by dolomitic limestone formations that spread all over the landscape, but it’s the eastern side that has the famous karst formations such as the Stone Forest. Meanwhile, on the west side, we can identify large mountainous areas filled with a wide variety of trekkings ranging from easy 2-4 hour hikes around a lake, to one-week-long treks with passages through exposed arêtes and lost valleys.

When speaking about biodiversity, the climate zones of the province range from the subtropical to the subpolar oceanic ones. The former predominates in the south and lasts throughout the year. It’s home to vegetation such as the Jaggery Palm, the Opium poppy or the Mountain Ebony tree; these characteristic dense forests are not only highly populated with plants, but also with a vast amount of insects and animals. While travelling to the northeast, one can see famous rice terraces, and if you continue going deeper into the west, long ranges of snowy mountains will be revealed on the horizon.

The Tiger Leaping Gorge is probably the most famous trek in Yunnan. The hiking path covers a distance of 16 kilometers. At several points of the trail it is visible that the Jinsha river has carved such a deep path in comparison with the mountains’ walls that surround it that depth of the gorge sometimes nears approximately 3,790 meters. This trek was open to foreign tourists in 1993 and it is usually completed in one to three days depending on the group speed. The trekking begins in Quiaotiao and you will have to pay around 60 to 70 Rmb to enter the trail although there are ways to avoid this fee.

Along the path one can see members of the Naxi and Mosuo minorities known for their matriarchal society. Once the girls turn thirteen years old, they jump into the adult life and from that moment on although there’s a husband or father to the children they might have, they can take any number of lovers they want.

View of the gorge from the high path, showing Jade Dragon Snow Mountain

The treks in this area are unparalleled. The Tibetan culture impregnates the land with its traditional monuments, flags, and towns. The “base camp” town usually chosen for these treks is Deqin, which rests at an altitude of 3,550 meters. From this location one can

One can see this mountain chain from Dali’s Old town. It has nineteen peaks, the tallest beingMalong at 4.122 meters. In each valley created by these peaks there will be a river which can be followed upstream. You are welcome to enjoy a lively ecosystem of flowers, birds, animals and, if the weather and the stream current allows it, after a long day of walking one can have a swim in these fresh and limpid waters.

In order to access the CangShan Mountains one has to pay an entrance fee of 40 Rmb. After crossing the gate, there are two choices: either walk up through a large pine forest, stepping on well-kempt paths and stairs, or take one of the cableways that will drop you off on the mountain’s top.

Kawagarbo (梅里雪山) with its 6,740 m is the highest mountain in Yunnan province and is situated on the north-west side of the region. This magnificent mountain is one of the most sacred mountains for Tibetan Buddhism and every year around twenty thousand pilgrims visit the peak area. “Kora” is the term used by the Tibetans when making a circumambulation around a sacred site or object.

This sacred mountain had been a virgin until 1990 when a Japanese-Chinese group of alpinists, despite the Tibetan protests, began the ascension. On the third of January, an avalanche buried the whole expedition finishing the climb. Two more attempts were made unsuccessfully until the local government prohibited climbing it regardless what grounds you might have for a climb, religious or personal.

Jade Dragon Snow Mountain isn’t just a peak, but a small mountain range with different peaks, the highest one being Shanzidou with a height of 5,596 m. This peak has been climbed only once, by an American expedition which gave the climb a difficulty of 5.7 / IV+.

The Jade Dragon Snow Mountain is not only between the southernmost glaciers in the Northern Hemisphere, but also has one of the most varied and rich animal and plant population of China.

Despite the wishes to protect this wildlife diversity, we can find a ski resort and several cableways that will drop you almost at the mountain top for a price of 120 RMB. Although it’s a very touristy place, the dangers and risks of the mountain cannot be ignored! Two avalanches have been reported in the last 15 years, gladly without any victims; so one must dress accordingly and avoid walking out of the designated paths in order to prevent being caught by an avalanche.

With an elevation of 5,396m, it’s one the preferred destinations for mountaineers and alpinists due to a relatively “easy” climb in order to get to the top. Haba is considered ultra-prominent, which means it has a prominence of over 1,500 m, actually it is 1,794m. Usually, after spending a night at Haba village, the next day one will trek to the base camp at 4,100m. The hike up and down the mountain will take around 7 - 9 hours depending on the level of fitness.

One cannot leave Yunnan without visiting Yuanyang rice terrace paddies, a UNESCO world heritage site. This colossal masterpiece has been built by the Hani people and the best time of the year to visit the terraces would be between January and March. There are three scenic areas worth visiting: Duoyishu and Bada, where one can shoot the best sunrise and sunset pictures, and Laohuzui.

The languages spoken in Yunnan are dialects of Mandarin Chinese. English speaking persons are hard to find although one can “manage” fairly easily with gestures and phone translation.

Food in Yunnan is an amalgam of Han and cuisines of different minorities. The choice is astounding, from extremely spicy dishes typical for Sichuan province and Dai minority, to different mushroom dishes (one of Yunnan specialities).

Some typical dishes of this region are:

The weather in Yunnan is dry in the winter season and wet in the summer. The temperature will usually fluctuate between 10 to 30 ºC. Due to the altitude disparity between the north-west and the south part of the province, temperatures will vary depending on the place you are in. The higher the altitude, the colder it gets.

If you don’t plan to meander in the jungle, drink water out of springs or fountains or have a prolonged contact with country animals, then you may not get vaccinated. But! If you plan to move around the country area and be adventurous with food and drinks, you should at least get vaccinated for

Some cities you should visit

Kunming is the capital of Yunnan with a population of 6.5 million inhabitants. It has a great connection with the Southeast Asian countries, there are overnight trains that will get you to the border in less than 6 hours. Some places to visit in Kunming are

Dali is divided into “new” and “old” town. The Old Town Dali was the medieval capital of the Kingdom of Dali which was invaded by the Mongols. One can get to Dali from Kunming on a high speed train in 2 to 3 hours, or take a 6-hour bus ride. In Dali, one can visit the three pagodas, Shaxi Ancient Town. From Dali Old Town you can take a bus or taxi that will drop you off at the CangShan Mountains gate in less than 10 minutes.

Also known as the Venice of the East, is known for its UNESCO Old Town. Here we can find minorities such as the Naxi, Mosuo, Yi or Pumi. Popular activities in town are visiting its Old town, Lugu Lake or Jade Dragon Snow Mountain which was mentioned above. Another option is, instead of taking a bus to Shangri-La, follow the Tiger Leaping Gorge upstream and walk through the steep paths.

Shangri-La originally was called Zhondiang but, in order to promote tourism in the area, the name was changed to Shangri-La, a fictional place described in the 1933 novel Lost Horizon by British author James Hilton. He described this town as a “Mystical, harmonious valley, gently guided from a lamasery, enclosed in the western end of the Kunlun Mountains.”

In 2014, a fire broke out and burned half of the old town, which was later rebuilt, although most of the sights were located outside of the Old Town and weren’t affected by this fire. From Shangri-La, one can hike up the previously mentioned Haba Snow Mountain, admire the views from the Balagezong Scenic Area or have a walk through the Potatso National Park which is home to a third of China’s mammal and bird species. 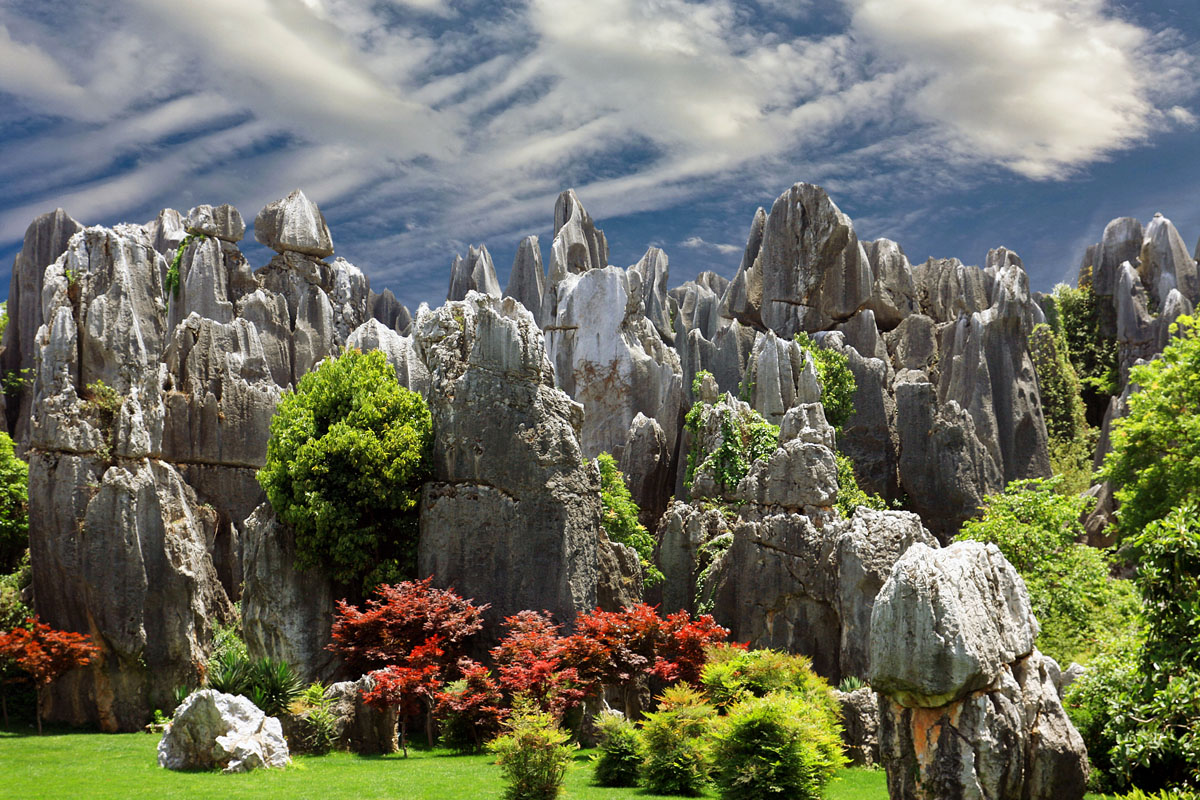 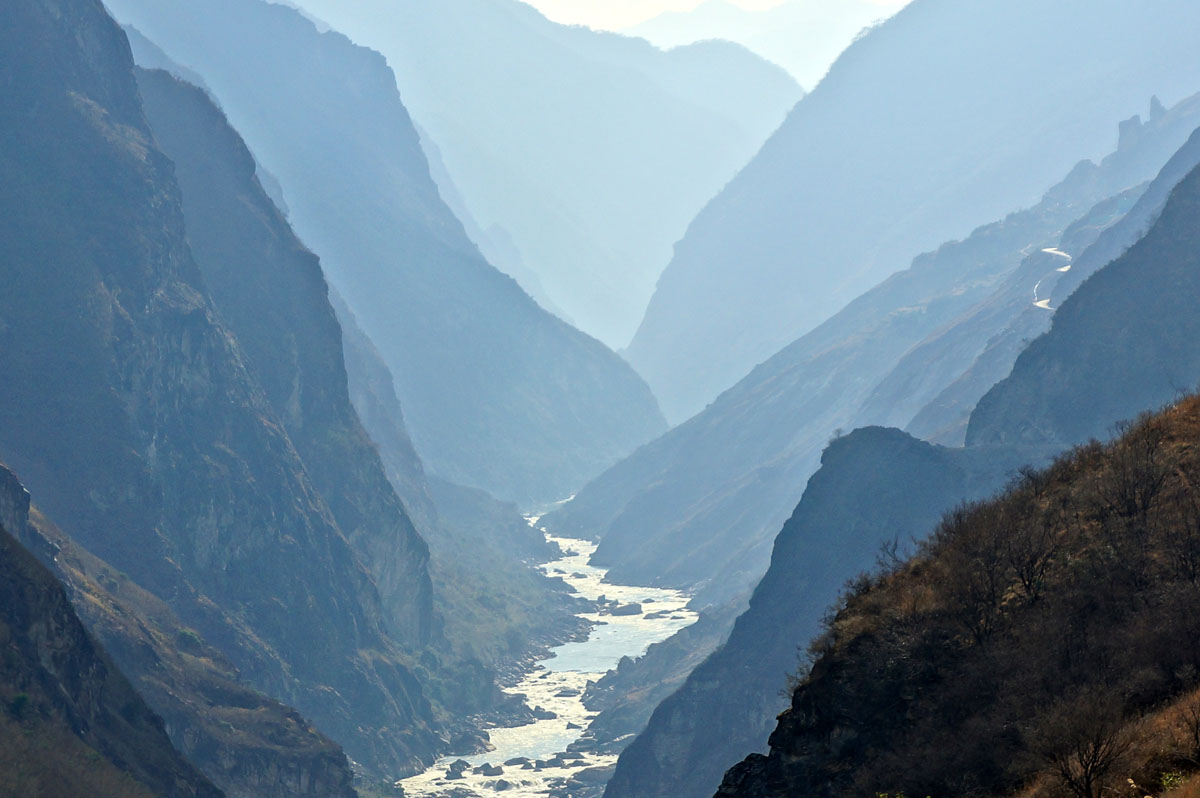 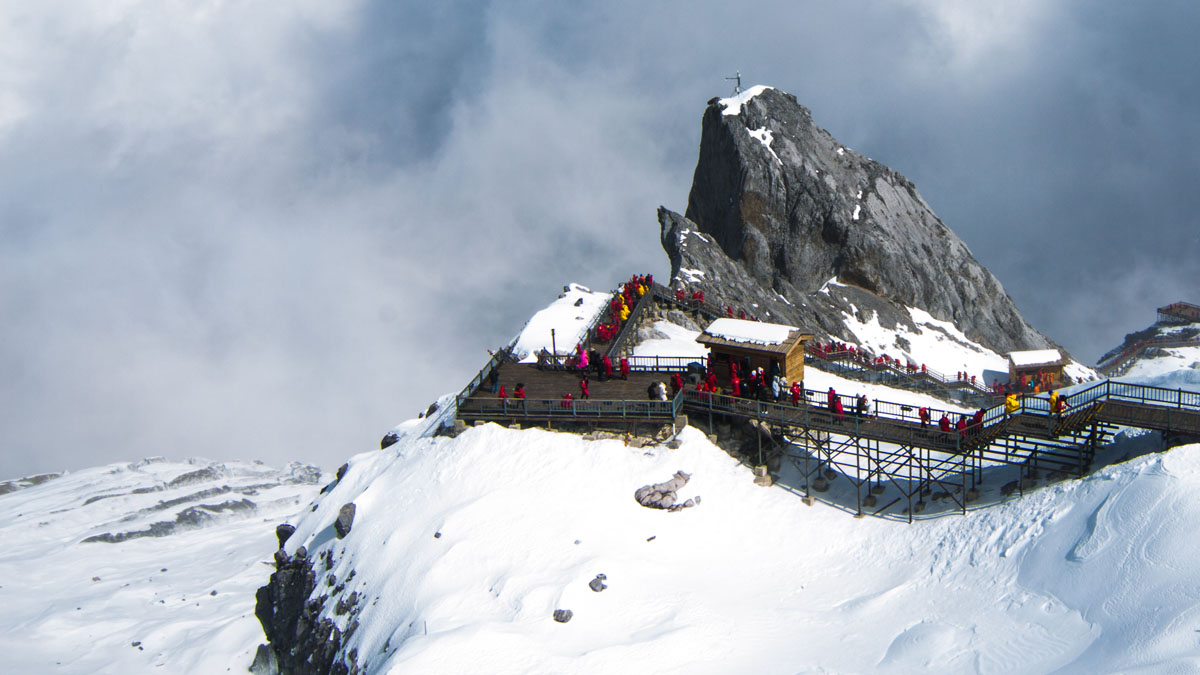 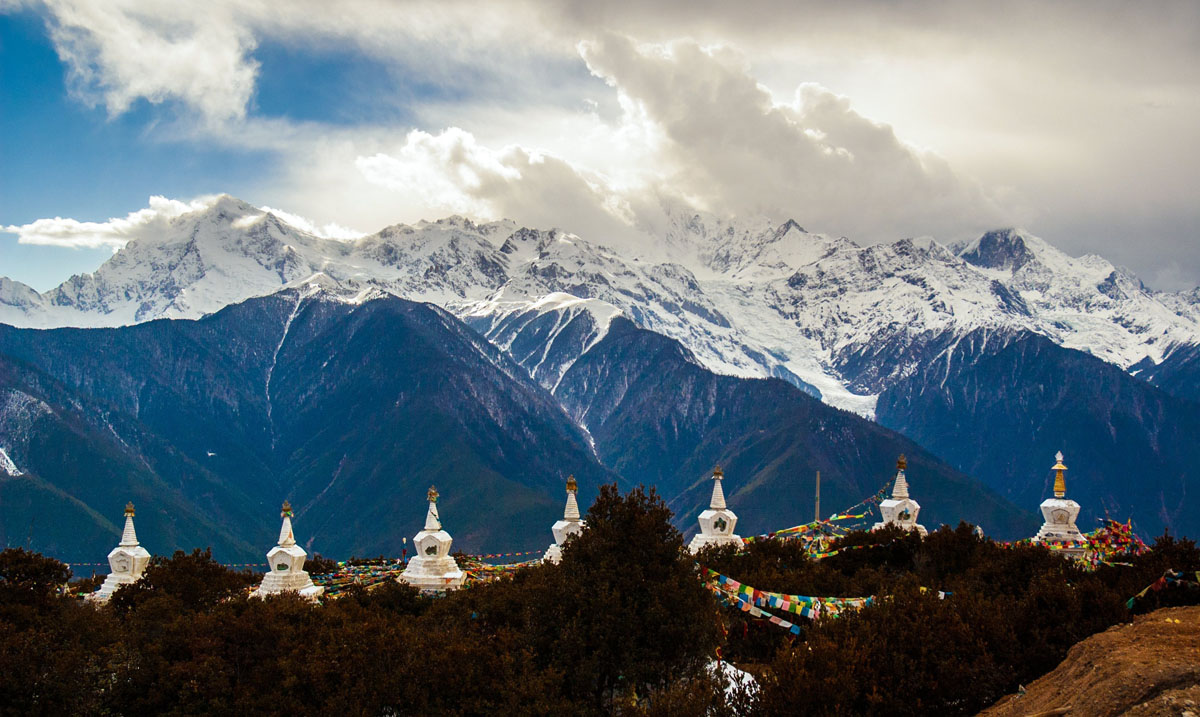 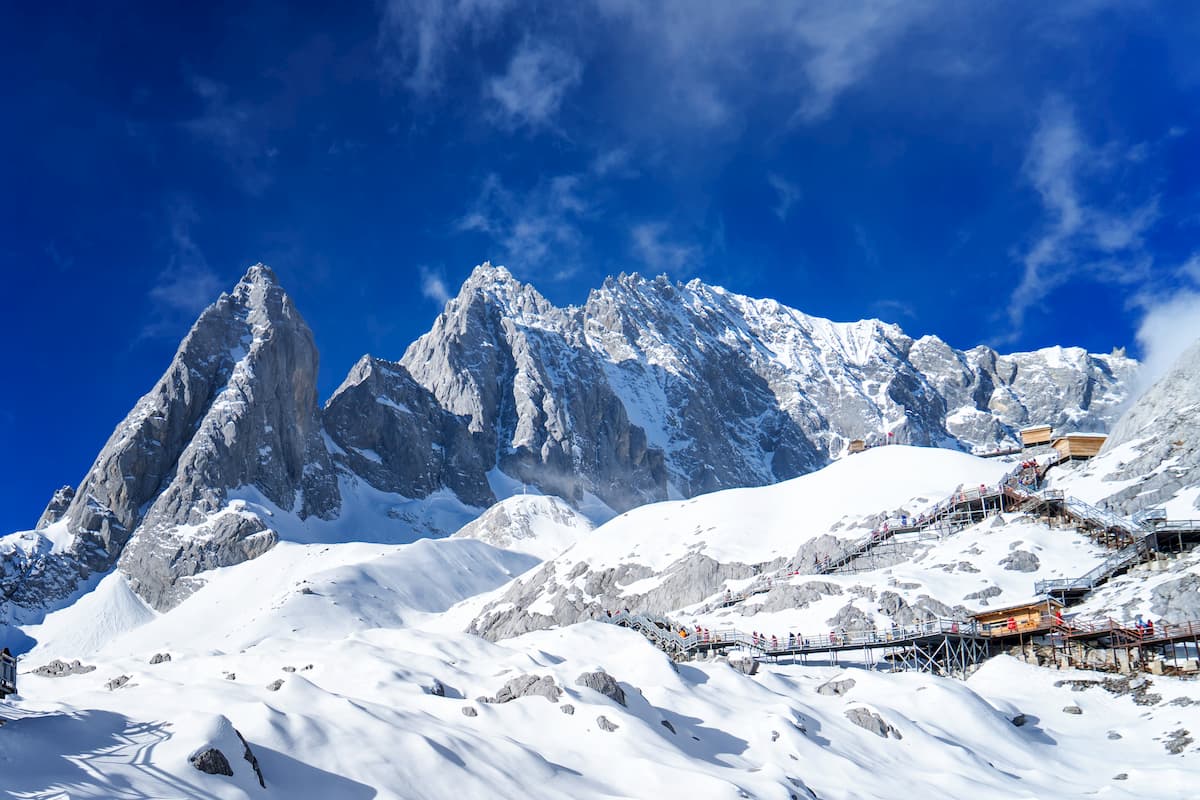 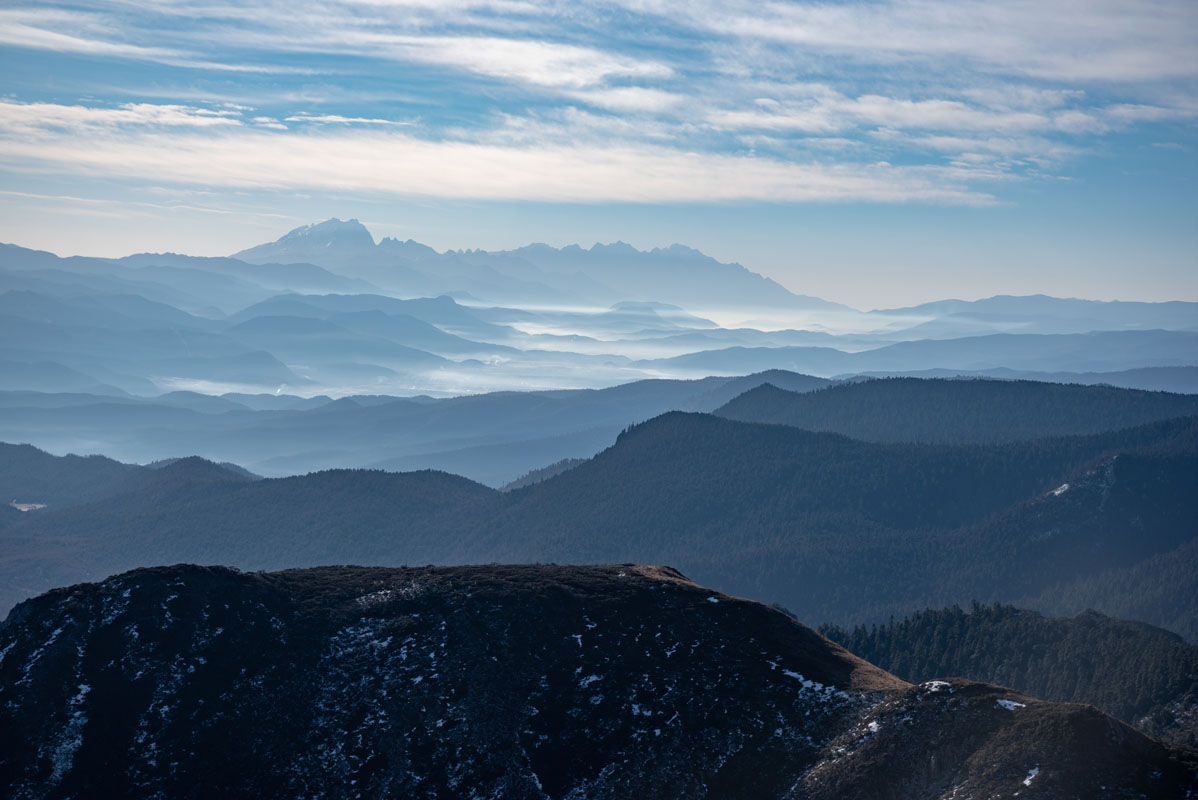 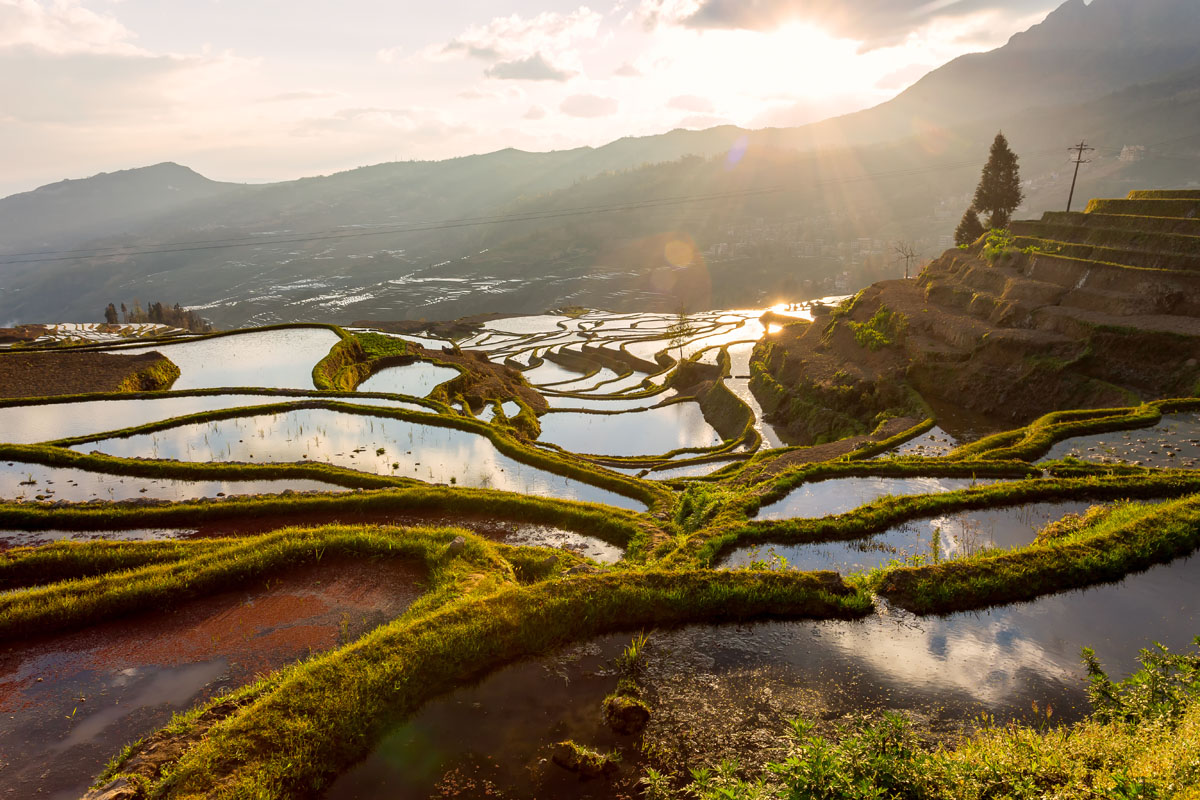