Home to stunning lakes and out-of-this-world rock formations, the Albion Mountains are a small but rugged mountain range located in the southeastern part of the US state of Idaho and the extreme northwest of the state of Utah. The range contains 24 named mountains, the highest and most prominent of which is Cache Peak (10,312ft/3,143m). 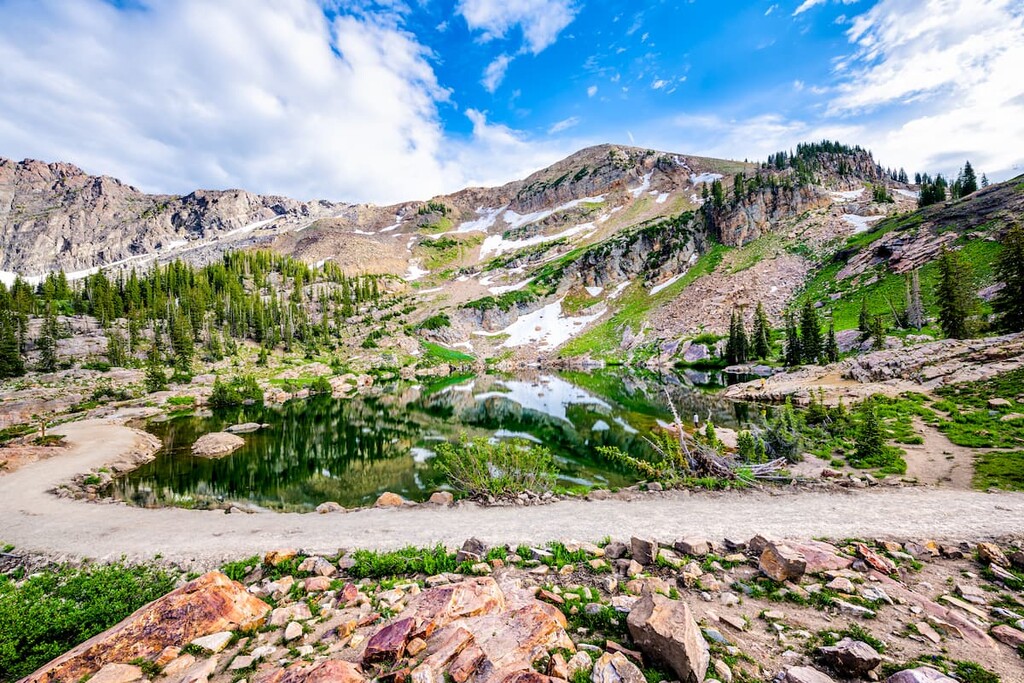 The Albion Mountains are a small chain of peaks located in the states of Idaho and Utah. Spanning some 49 miles (79 km) and reaching a maximum width of about 36 miles (58 km), the range covers an area of approximately 1,000 square miles (2,800 sq. km) in Cassia and Box Elder counties.

Furthermore, the Albion Mountains are situated to the west of the Black Pine Mountains, the Raft River Mountains, and the Sublett Range, as well as to the south of the vast Snake River Plain.

The Albion Mountains are a patchwork of public and private land, though most of the land in the range is part of either the City of Rocks National Reserve or the Sawtooth National Forest.

The Albion Mountains are a part of the larger Great Basin Ranges, which cover parts of Nevada, California, Oregon, Idaho, Utah, and Arizona. Geologically, the Great Basin Ranges are the result of widespread tectonic extension that took place during the Miocene.

That being said, the Albion Mountains are particularly well-known for their geologic formations, especially in the southern part of the range. Within the range, a substantial amount of the bedrock is granite that is part of an ancient Green Creek Complex, which is believed to be about 2.5 billion years old.

Geologic forces have, over the years, eroded away at the many granitic domes and spires in the range, leaving behind the beautiful cliffs and formations that we see today through a process known as exfoliation.

Within the Albion Mountains, there are a number of major ecosystems which are home to a great array of flora and fauna.

In particular, the range is dominated by a mix of shrub steppe lands, particularly at lower elevations. There are also pinyon and juniper woodlands as well as conifer and aspen forests at mid-elevations. Meanwhile, the highest elevations in the range are home to alpine meadows.

Furthermore, there are a number of rare plant species found within the Albion Mountains, including the Davis springsparsely.

Easily the rarest plant found in the range, though is the Christ’s Indian Paintbrush (Castilleja christii). This flower is found only on the slopes of Mount Harrison in the Albion Mountains around 9,100 feet (2,800m) in elevation and its population is declining. So, if you happen to be in the region, please be sure that you don’t pick the flowers!

Wildlife in the range is also fairly abundant and it includes everything from badgers, mule deer, marmots, jackrabbits, and coyotes to cougars and bobcats. The Albon Mountains also have an endemic bird species, the South Hills crossbill which is only found in southeastern Idaho.

The region in and around the Albion Mountains has been home to people since time immemorial. In particular, the range is part of the ancestral homelands and traditional territory of a number of peoples, most notably the Shoshone-Bannock Tribes.

For the most part, the region was seldom settled by Europeans and Americans of European descent (Except for fur traders) until about the nineteenth century. Around that time, the Oregon Trail and the California Trail (which split apart at nearby Fort Hall) both became major thoroughfares for people venturing from the Eastern United States to the west coast.

The trails actually passed by what is now the community of Almo to the east of the range and the community itself was established by members of the The Church of Jesus Christ of Latter-day Saints in the nineteenth century.

City of Rocks in the southern part of the range was first protected by the Idaho Legislature in 1957 as a National Historic Landmark. Some decades later, in 1973, the land was then transferred to the Idaho Department of Parks and Recreation before being re-designated as a National Natural Landmark.

In 1988, the landmark was then designated as a National Reserve as part of the Arizona-Idaho Conservation Act. This act placed all of the federal land in the region under the management of the National Park Service, though the region is now managed alongside state officials.

Nowadays, the region is a popular destination for rock climbers and hikers who set out into the range to enjoy its scenic beauty and unique geologic formations.

While the range itself might be quite small, the Albion Mountains are home to some particularly popular outdoor recreation destinations. Here are some of the best places to check out in the region.

By and large the biggest attraction in the Albion Range, City of Rocks National Reserve is a famous rock climbing destination and hiking location. The reserve is home to 13 named mountains, the highest and most prominent of which is Graham Peak.

As the name suggests, City of Rocks is, well, rocky, and it is home to thousands of granite rock domes and spires that dot the landscape. The reserve is particularly popular among climbers as there are well over 1,000 routes in the area.

While the reserve is actually fairly small, it is a fantastic place to venture to if you’re looking to see a landscape like no other. Even if you’re not too keen on heights and climbing, there are a number of campgrounds both in and near the reserve as well as plenty of hiking trails to enjoy.

To be careful, however, when visiting the reserve in the summer months. The heat can be particularly dangerous, especially around midday. If possible, plan your recreation for the morning and evening when the temperatures are more tolerable and don’t forget to stay hydrated.

Within the Albion Mountains, the Sawtooth National Forest is home to some of the largest peaks in the range, including Cache Peak, Mount Independence, and Mount Harrison, which are all worthy summit attempts. The forest also contains the stunning Independence Lakes, which are one of the most popular backpacking destinations in the region.

There is also a small alpine ski area within the Sawtooth National Forest section of the Albion Mountains, Pomerelle, which is one of the oldest in the western part of the country.

Looking for a place to stay during your travels to the Albion Mountains? Here are some of the best towns and cities to check out:

Although it’s quite small, the community of Almo, Idaho is located just to the east of the southern Albion Mountains and it is one of the most popular stopping areas in the region. Thanks to its proximity to City of Rocks National Reserve, Almo is a go-to place if you need food or supplies during your visit.

In fact, the community has a fairly large gas station, convenience store, and pizza place called Rock City Mercantile, which is a popular haunt among climbers in the area. The store is open on a seasonal basis during the spring, summer, and fall, so it’s a must-visit if you’re in the area.

Located to the northwest of the Albion Mountains, Twin Falls is the largest city in the region. It is home to around 50,000 people and it is the county seat of Twin Falls County. Twin Falls is perhaps best known in popular culture for being the site of daredevil Evel Knievel’s attempted rocket-powered jump.

The region around Twin Falls is highly agricultural, though it also has a growing manufacturing industry. Interestingly, Twin Falls is the largest city in the state that’s not directly along an Interstate highway, though it is still relatively easy to get to by road. There is also a small regional airport located outside the city.

While it’s located about 3 hours to the south of the Albion Mountains, Salt Lake City, Utah is one of the largest communities within driving distance of the range. It is home to about 200,000 people, though some 1.2 million live in the city’s greater metropolitan area.

Salt Lake City is the commercial and cultural hub for the state of Utah and for the Wasatch Front. It is home to the largest airport in the surrounding area and it offers excellent transportation connections around the US. Plus, Salt Lake City is an excellent outdoor recreation destination in its own right, so it’s well worth the visit. 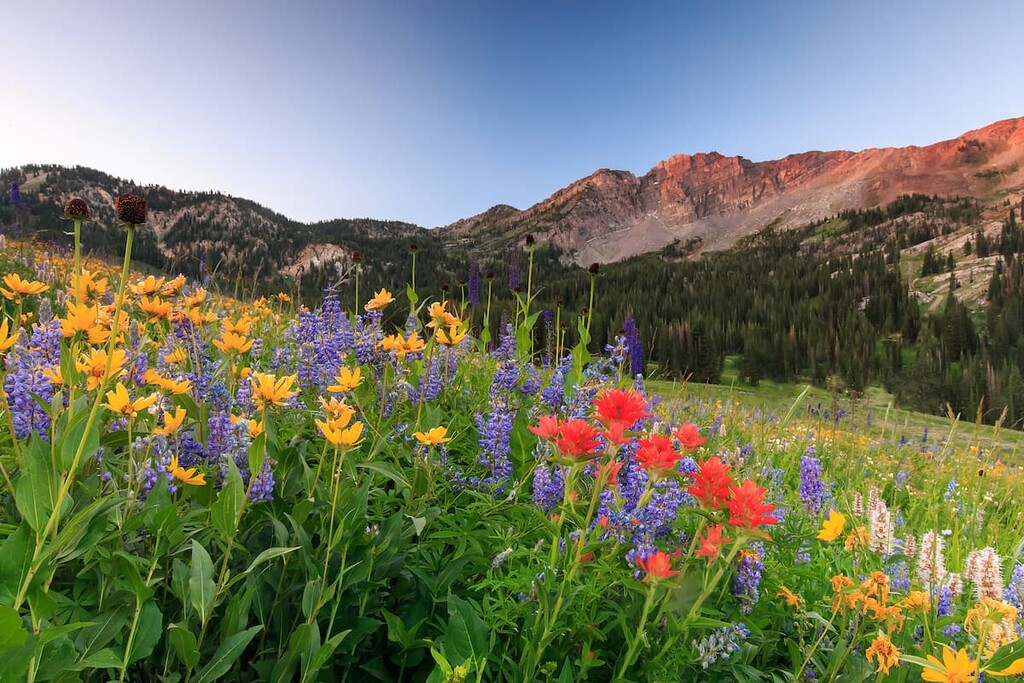 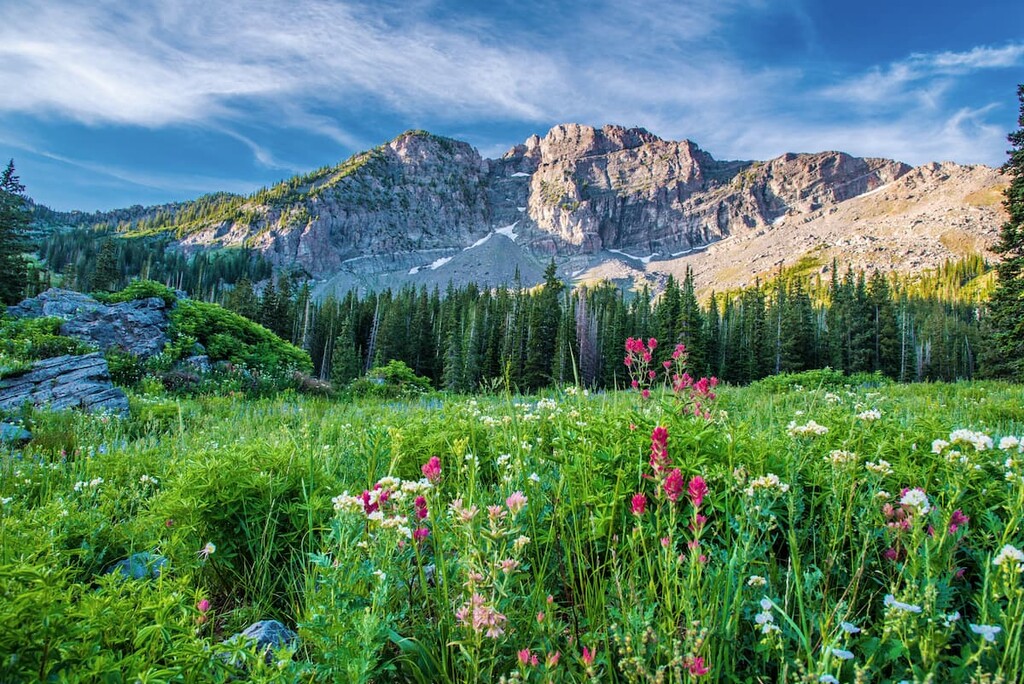 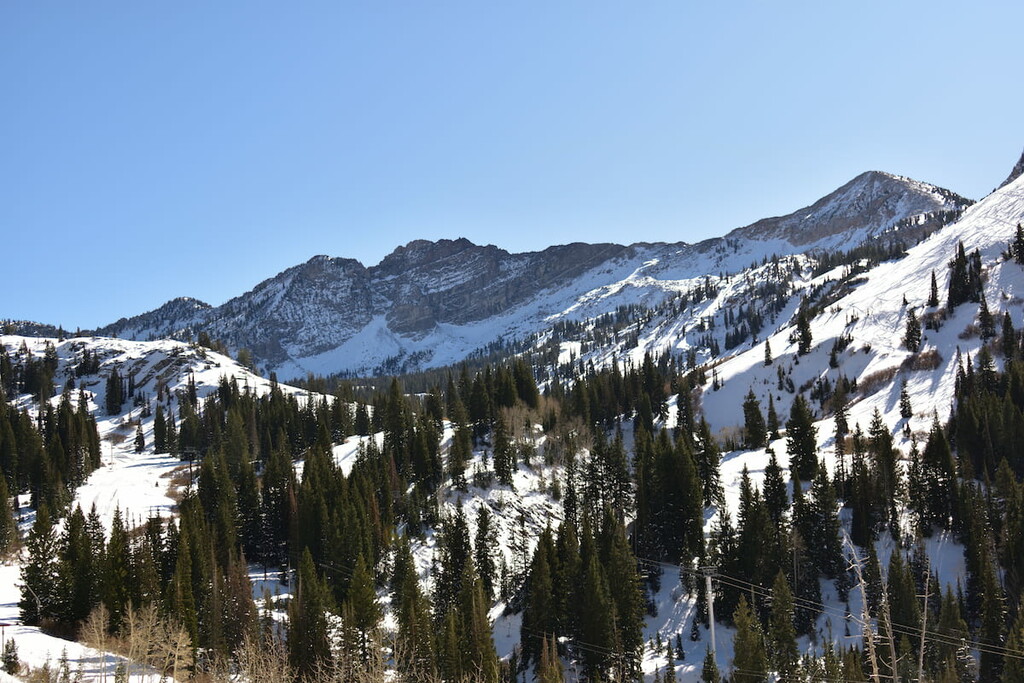 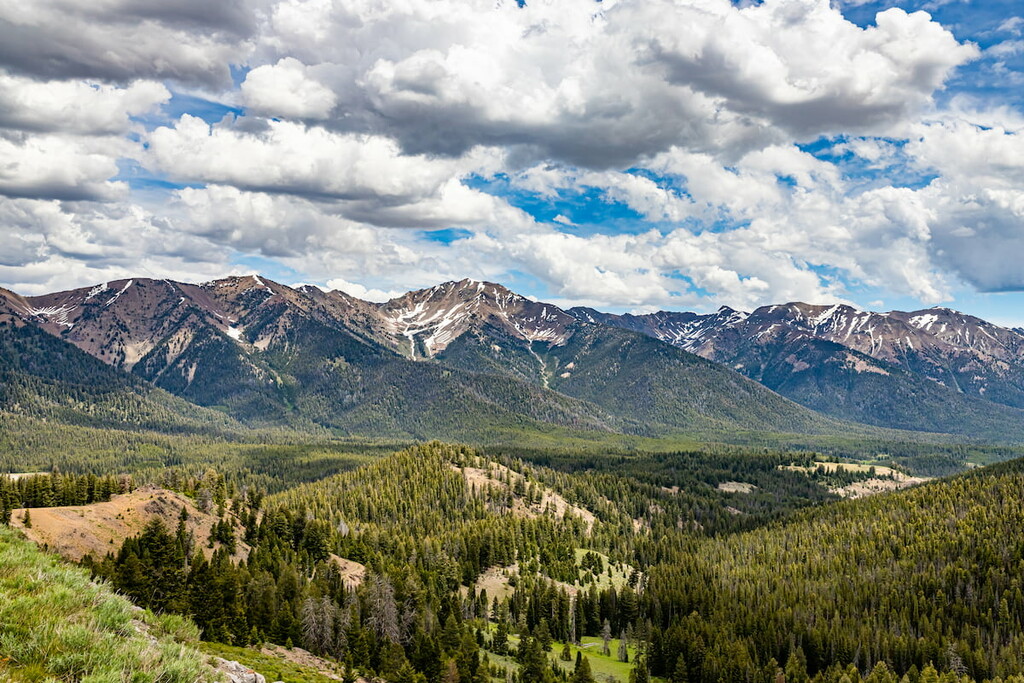 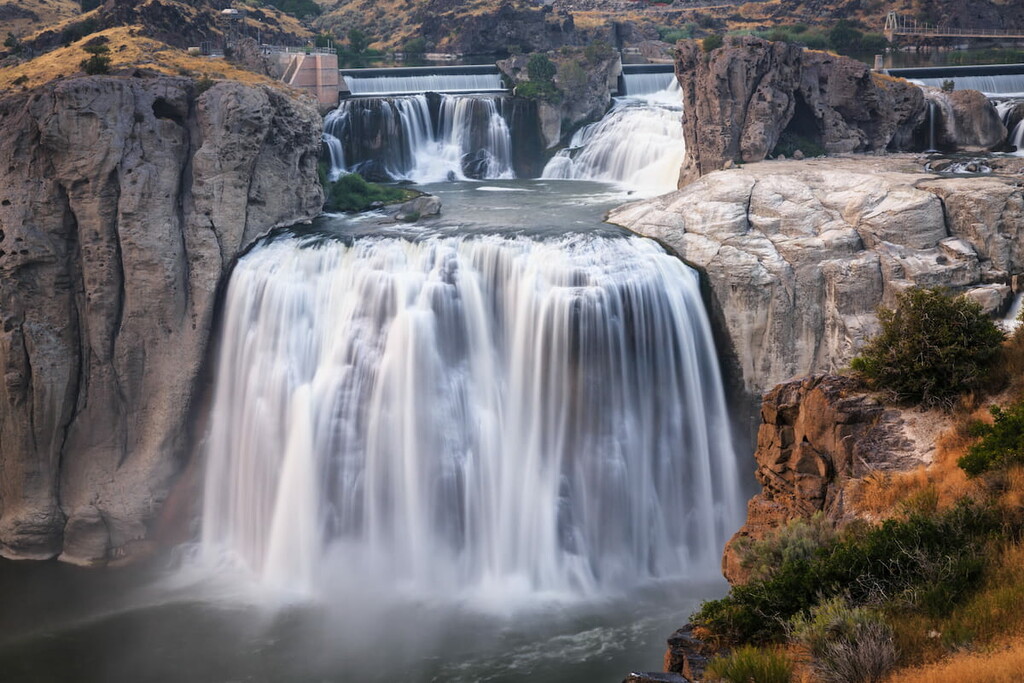