The Puez Group is a relatively small mountain chain located in the Dolomites of northern Italy. alongside the Odle and Peitlerkofel groups, the Puez Group is part of the Puez-Odle Nature Park. The main feature of the Gruppo del Puez is the impressive Sassongher (2,665 m / 8,743 ft) peak, which looks like a giant tower. There are 42 named mountains in Puezgruppe. The highest and the most prominent mountain is Westliche Puezspitze (2,918 m / 9,573 ft). 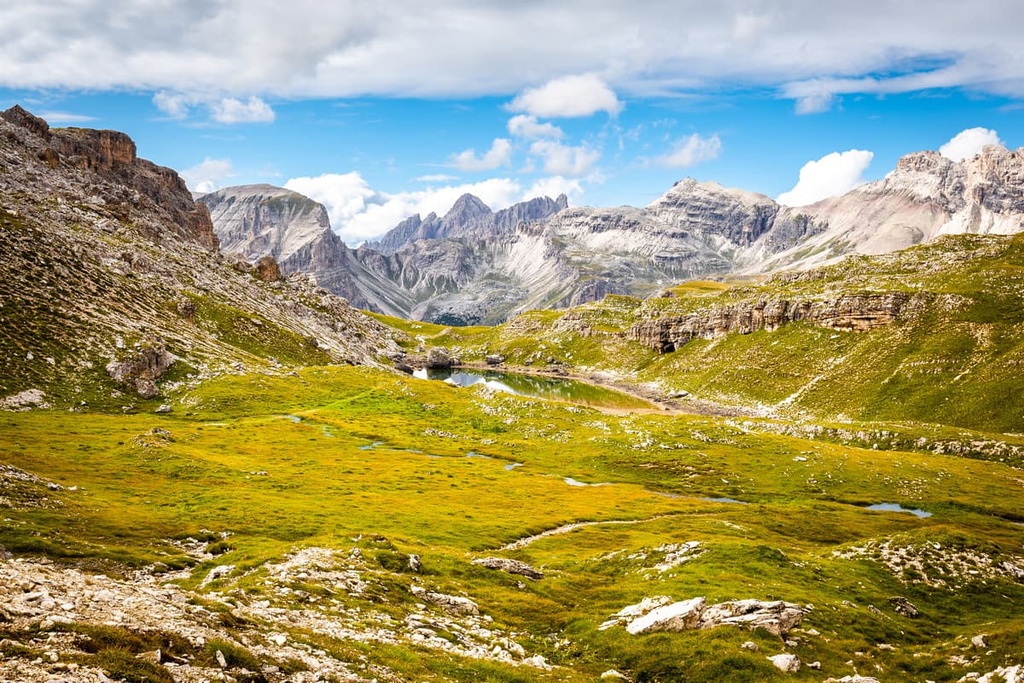 The Puez Group is located in the West Dolomites range of the province of South Tyrol in the Trentino-Alto Adige/Sudtirol region in Italy. It is one of the westernmost and northernmost groups in the Dolomites.

The exact boundaries of the group run through the two large valleys that surround it: the Gardena Valley (Val Gardena) in the south and the Badia Valley (Val Badia or Alta Badia) in the east. These are two of the five well-known Ladins valleys, where the primary ethnic group of the Dolomites, the Ladins, have lived since ancient times.

To the north and west, the group is bordered by the Peitlerkofel and Odle groups. From these two groups, Gruppo del Puez is separated by Roa-Scharte / Nives-Scharte and Kreuzjoch passes (2,286 m / 7,500 ft), respectively.

But these are not the only mountains in the area. Puetz also neighbors the Langkofel and Sella groups to the south (from the latter it is separated by the Gardena / Grödner Joch pass) and the Fanes group to the west.

How to get to the Puetz Group

Administratively, the group belongs to the municipality of Corvara in Badia / Kurfar, which is located on the southern borders of the group. This relatively small village is the capital of the Badia Valley and one of the tourist centers of the Dolomites.

For those who want to travel by public transport there are Suedtirol Mobil bus routes from Bolzano and Dolomiti Bus routes from Belluno between these localities.

In geological terms, the Puez Group, together with the Odle and Peitlerkofel, is also part of one of the nine major mountain systems in the Dolomites. This mountain system is formally called Puetz-Odle, and its territory almost entirely coincides with that of its namesake nature park.

The main mineral in this group is the same as in the other eight groups in the Dolomites: dolomite. It was after the French explorer Déodat Gratet de Dolomieu. Dolomite began to form 200–230 years ago in the Triassic period as sediment collected on the bottom of the tropical Tethys Ocean.

However, Puetz-Odle System is unique because it contains a diversity of geological layers and minerals. For example, in addition to Principle Dolomite, the main type of this mineral, other varieties such as Sarl / Serla Dolomite and Schlern / Sciliar Dolomite can be seen here.

In addition to the peaks, passes, and neighboring groups, other features of the park’s landscape include:

The Gruppo del Puez is one of the dozens of groups that make up the Dolomites in the Southern Limestone Alps in the Classification of the Eastern Alps by the German and Austrian Alpine Club, which is also known by the acronym AVE.

By this classification, the Dolomites, in turn, are one of the 75 groups in the Eastern Alps alongside the Carnic Alps, Fiemme Mountains, and Sobretta-Gavia, among others.

According to another popular classification system, the Italian SOIUSA (Suddivisione Orografica Internazionale Unificata del Sistema Alpino or International Unified Orographic Division of the Alpine System), the Puez Group is also a separate group within the Dolomiti di Gardena supergroup.

The Puez Group can also be subdivided into the following main groups:

Up next, we’ll discuss some of the most important peaks in the Puez Group.

Piz de Puez is the highest and the most prominent peak of the Puez Group (303 m / 994 ft) as well as its namesake.

Piz Duleda (2,909 m / 9,544 ft) is the second highest mountain in the group. It is located to the east of Piz de Puez. Piz Duleda is home to the widest and the largest north face in the group.

The mountain looks like a huge pyramid with an impressive north wall that drops steeply into the Val di Longiarù / Campilltal. This valley was formed by the river of the same name, Rio Longiarù / Campiller Bach.

Sassongher / Sass Songher (2,665 m / 8,743 ft) is the most unusual mountain in the group. It looks like a tall fortress that towers over the village of Corvara at the center of the Alta Badia Valley.

Unlike the two highest peaks of the group, Sassongher is famous, particularly among locals. The mountain is depicted in many photographs of the region. It’s also a popular sight in the region, especially for cyclists of the Maratona dles Dolomites, the largest cycling race in the world by the number of participants, which runs through Corvara in July.

Best Hikes in the Puez Group

The Puez Group itself, and as part of the nature park of the same name, offers hikers and climbers a huge variety of trails of varying lengths and levels of difficulty. Here are some of the best hikes to check out in the group:

This hike is a relatively uncomplicated day trip on the west side of the group that is suitable for people who want just a quick taste of what the Puez has to offer. Even if you don’t visit anything else in the group besides this route, you won’t be disappointed.

The route begins at the Col Raiser cable car top station above the village of Selva di Val Gardena and goes to the summit of Col dala Piëres (2,747 m / 9,012 ft).

In my opinion, this hike is the best route in Gruppo del Puez. It travels through the high mountain plateau of Gherdenacia to the main mountain hut in the group.

The precise route is:

The route begins in the village of La Villa in the Badia Valley and ends in the village of Corvara in the same valley. It is simply a great overview trail that allows you to see in detail one of the main features of the Puez landscape and one of the five famous Ladin valleys, as well as the small interior Vallelunga Valley, which is normally hidden from the eyes of tourists.

Hike to the Summit of Sassongher

This is the route to the top of the most recognizable mountain in the group, Sassongher, which is also the symbol of Corvara village, the capital of the Badia Valley.

The route begins in Corvara in Badia, then follows through the Stella Alpina Valley along the cable car of the same name (only open winter) and Forcella Sassongher to the summit of Sassongher.

The most difficult part of the route is the section that leads to the top of Sassongher, where a small via ferrata awaits you. However, this via ferrata is not too difficult, even if you’re doing this type of climbing for the first time.

You can return the same way or continue to La Villa, the second most important village in the valley, via Para da Giai (2,503 m / 8,211 ft), Ruac stream, and Gardenaccia mountain hut. On this way back you can also shorten the route and save your strength and go down to La Villa using the Gardenaccia Cable Car.

Almost all the groups in the Dolomites are available for skiing thanks to the Dolomiti Superski network of ski resorts and ski areas. All of the areas of this group are connected by ski lifts and shuttle buses.

But the Puezgruppe stands out among them because it is located in the very heart of this system in the Badia and Fassa valleys. Therefore, during your visit you can access not just one ski area, but two areas at once: Val Badia Ski Resort and Val Gardena Ski Resort.

Furthermore, these resorts are connected to the neighboring ski areas in the Sella (which is home to the famous Sellaronda route), Langkofel / Sassolungo, Schlern and Rosengarten groups.

Badia is a more suitable destination for beginners because it has 70 km (43.4 mi) of blue runs. Meanwhile, Gardena is better for advanced skiers as it has 126 km (78.2 mi) of black and red runs.

For more information about hiking in the Puez Group on site after arriving in the Dolomites, visit one of the two main visitor centers located in the Gardena and Badia Valleys:

While hiking in the Puezgruppe, you will not have any difficulty in finding lodging. There are many hotels, huts, residences, and apartments in the group, especially on the southern and eastern borders of the group.

However, in this guide, we will only discuss the huts (rifugios in Italian). These are the classic type of lodging during hiking and mountaineering in the Dolomites. In the Puez Group there are four such huts:

The Puetz Hut is considered the major rifugio in the group. It is located in the heart of the group on the Gardenaccia Plateau at 2,475 m 8,120 (ft) on the route of the two famous long trails: Alta Via 2 and Alta Via 4.

The refuge has 85 beds in the common rooms and, as elsewhere, a large dining room with a bar. Half board (bed, dinner and breakfast) costs €70. A shower is an extra €5–10. They do not accept credit cards.

The main towns in and around the Puez Group are located on its southern borders. These are (from west to east and north):

All these towns are relatively small villages where people lead a quiet and peaceful life with an emphasis on tourism, outdoor activities, animal husbandry, and agriculture.

One of the best places to visit in the region is La Villa, which could well be seen as a starting point for travel in the Puez Group.

The main architectural and cultural attractions of the village, as well as sports facilities and events for which the village is primarily known are:

Check out the official tourist site for more information: Altabadia.org 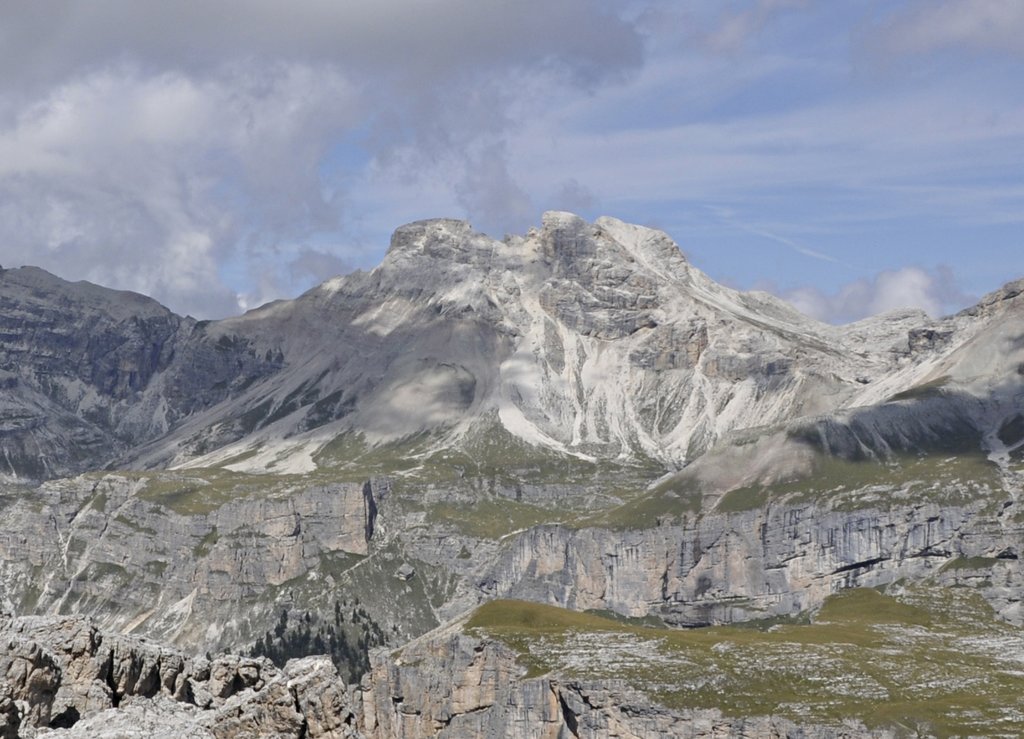 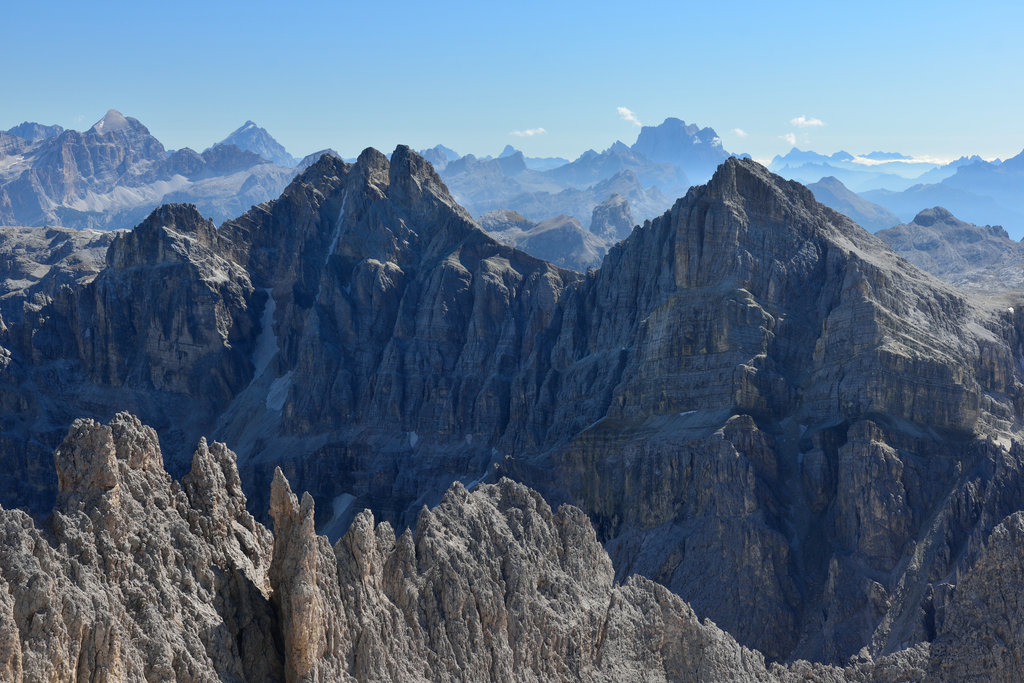 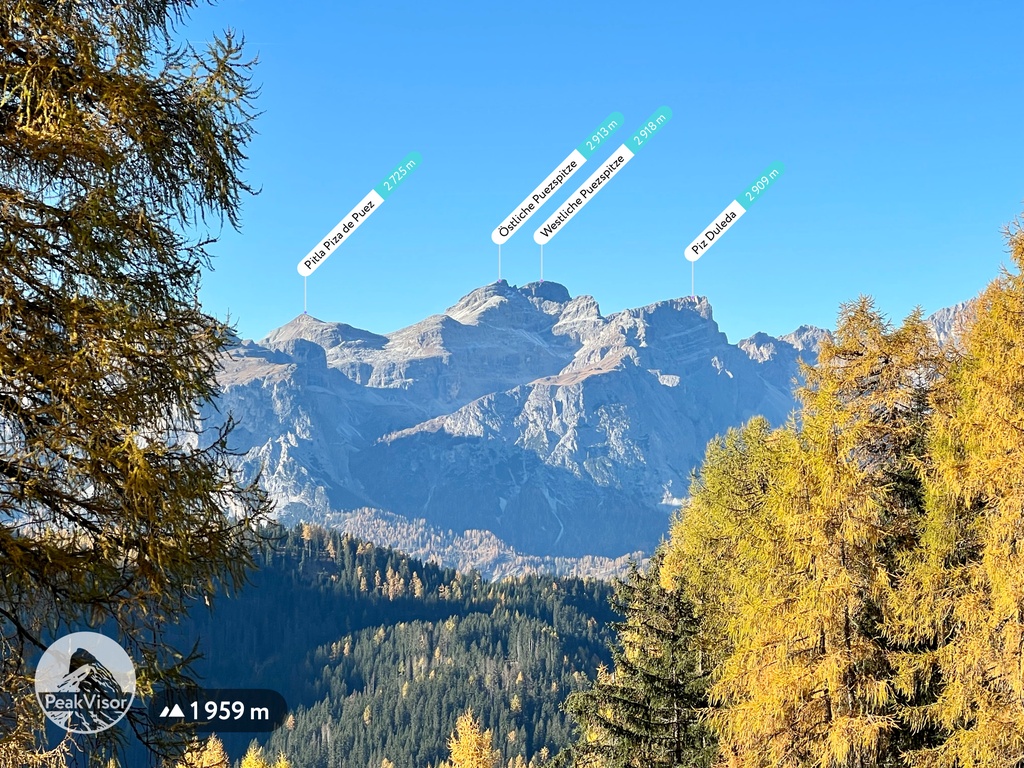 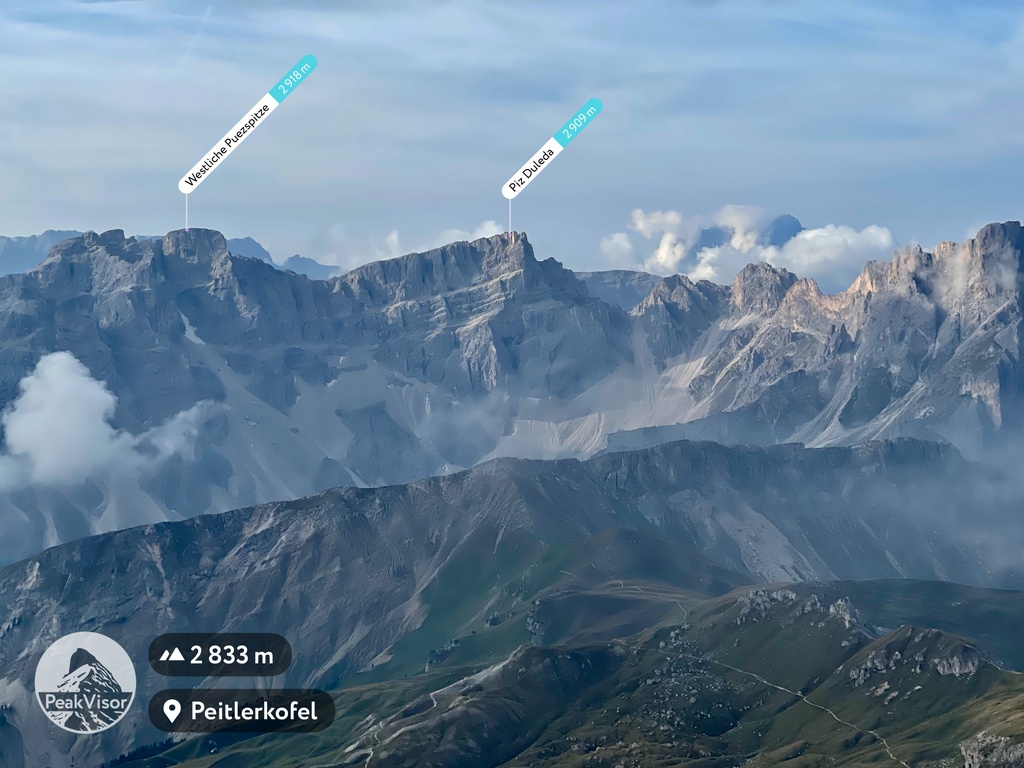 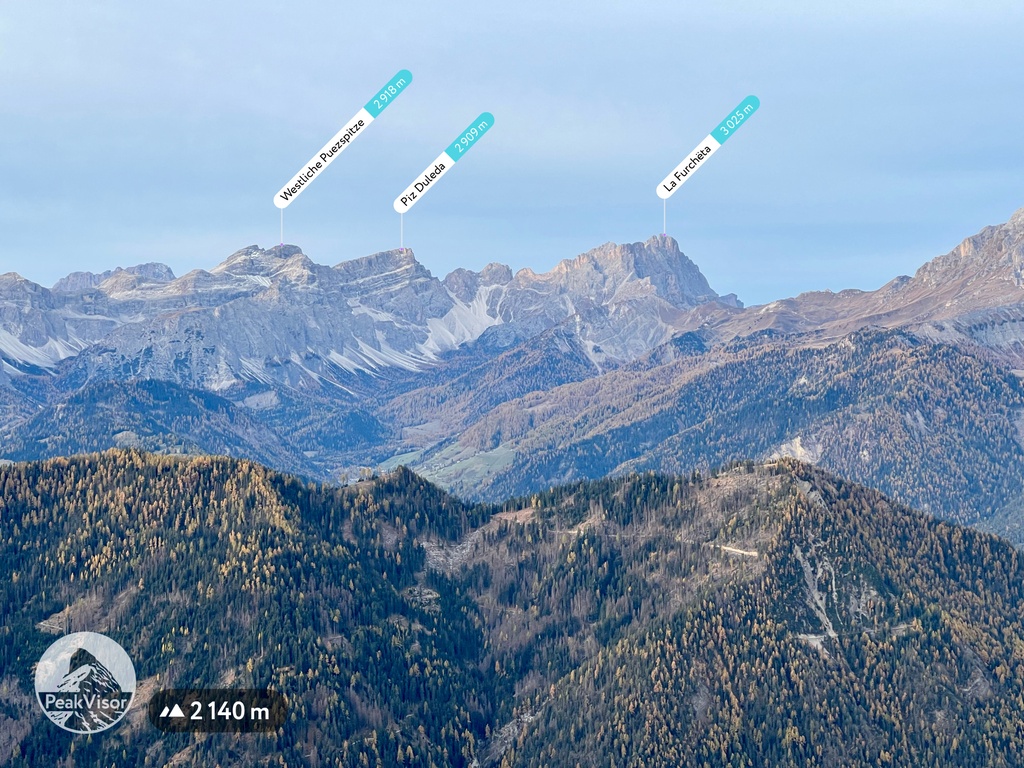 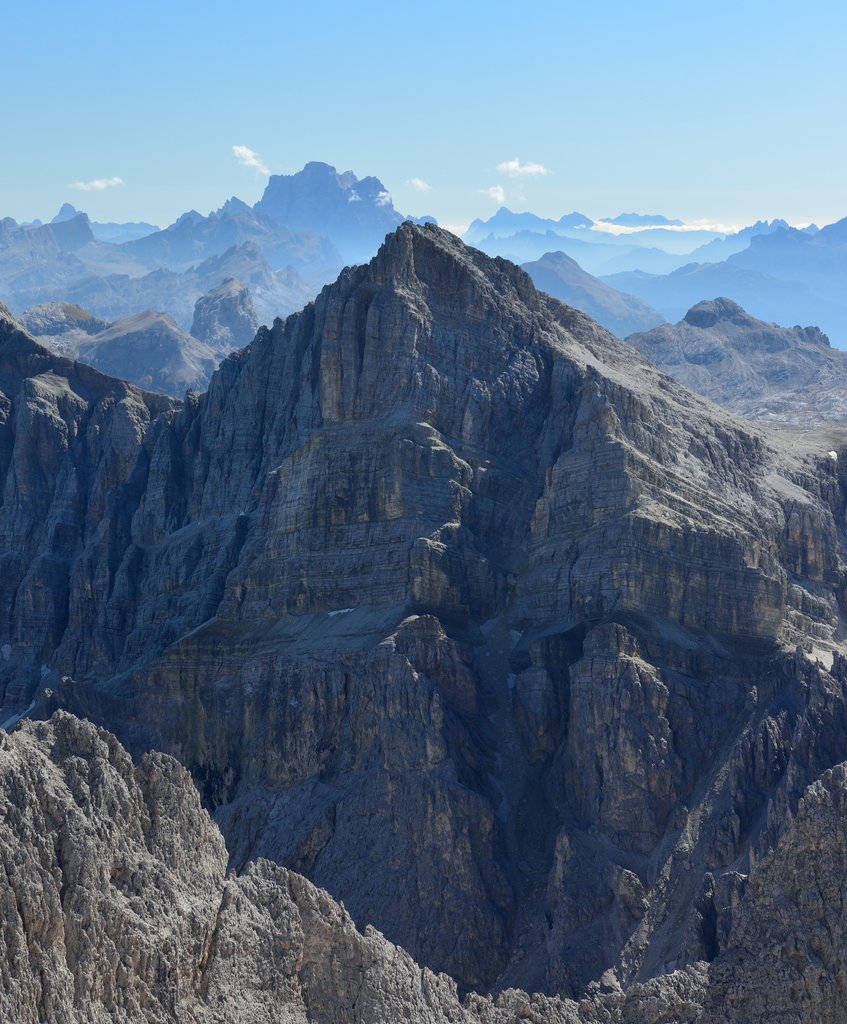 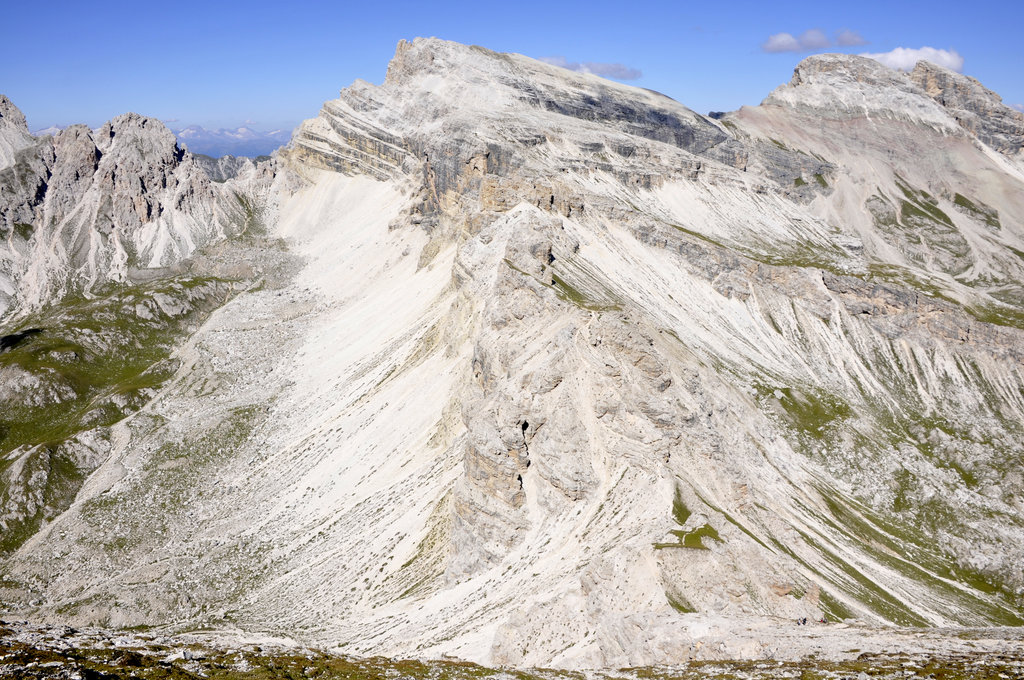 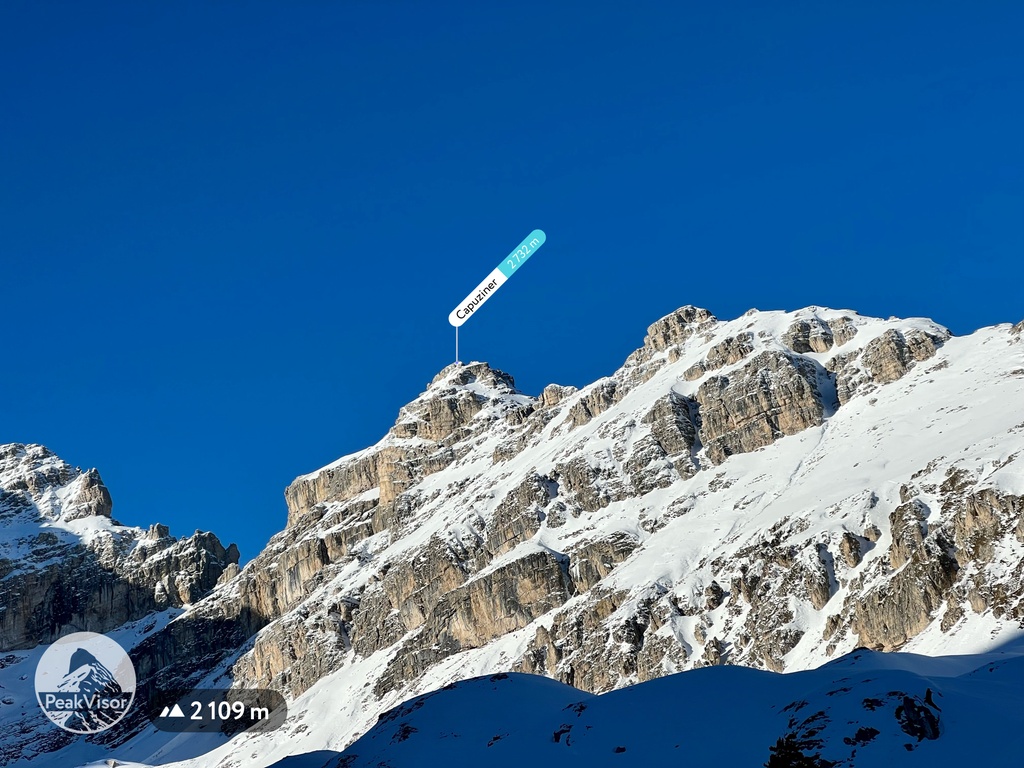