The Sunshine Coast Regional District is an administrative region that’s found along the southern coast of mainland British Columbia, Canada. The rugged Pacific Ranges of the Coast Mountains dominate the region and its 71 named peaks. The tallest and most prominent mountain in the region is Mount Tantalus at 2,603 m (8,537 ft) in elevation and with 1,470 m (4,821 ft) of prominence. 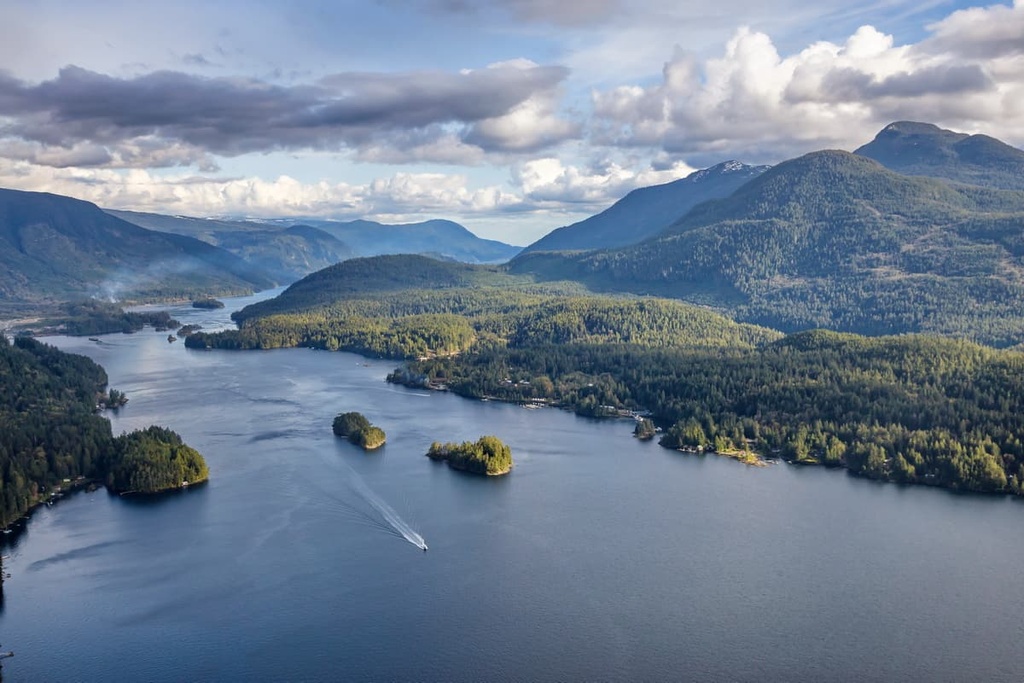 Located on the west coast of Canada, the Sunshine Coast Regional District is one of the administrative regions of the province of British Columbia.

Sunshine Coast Regional District is only accessible by plane or by ferry via Horseshoe Bay in Metro Vancouver. The region’s population is primarily situated along the coast, leaving the interior as a vast wilderness where logging and mining are the dominant industries. However, despite the prevalence of resource extraction in the area, the region has many protected areas, such as:

The rocks of the Sunshine Coast Regional District started accumulating about 380 million years ago with the eruption of submarine volcanoes. These eruptions created a plateau on the ocean floor. For the next 100 million years, marine sediments were deposited over the volcanic plateau, until more volcanoes erupted, creating the thickest layer of the region’s current terrane.

About 250 million years ago, volcanoes erupted and covered the forming terrane with a 6 km (3.6 mi) thick layer of basaltic lava, finally reaching above sea level. These eruptions lasted for about 5 million years and are the thickest component of the massive Wrangellia terrane.

The flood basalts of the Wrangellia terrane reach from central Alaska and travel through Yukon before heading down the west coast of British Columbia. They are one of the largest terranes accreted to western North America. The terrane is also possibly the most extensive remnant of an oceanic plateau where parts of the entire volcanic stratigraphy are exposed.

The accessibility of the Wrangellia terrane has allowed geologists to study the development of oceanic plateaus, as such plateaus are typically submerged beneath the ocean.

Glaciers covered the Sunshine Coast Regional District during the Pleistocene, carving massive valleys as they moved down the mountains and towards the sea.

During the most recent glacial maximum, the Georgia Strait and Vancouver Island were also covered with ice. As the glaciers melted, the sea level rose and created the rugged fjords and steep sided straits found in the region and along the coast today.

The ecology of the Sunshine Coast Regional District is mainly representative of the Dry Coastal Douglas-fir zone and the Rainforest Coastal Western Hemlock ecologies. The forests of the region are filled with the giant Douglas fir and western red cedar trees of the old growth forests. Such trees may grow to nearly 100 m (320 ft) and be over 15 m (50 ft) thick around their trunks.

The areas that are representative of the Coastal Douglas-fir zone are in the rain shadow of the Vancouver Island Ranges. This mediterranean-like climate is similar to that of the Saanich Peninsula on the south end of Vancouver Island where the city of Victoria enjoys more sunny days than any other city on the island.

Colony nesting bird species such as ancient murrelets, Cassin’s auklets, rhinoceros auklets, and tufted puffins nest on the rocky island of the central British Columbia coast. The forests provide important winter habitat for the birds and other wildlife, such as Columbian black-tailed deer, moose, and elk.

The Sunshine Coast Regional District is the traditional territory of the shíshálh First Nation. The shíshálh are part of the Coast Salish culture who have lived along Canada’s west coast for thousands of years. Before European contact, the many First Nations that traditionally live in the region moved, hunted, and gathered according to resources available during the different seasons.

As settlers and traders arrived in the region, the shíshálh were hit hard by smallpox, which killed many tribal members. The shíshálh women are traditionally known for their cedar woven baskets, which were historically made from cedar tree roots, cannery grass, and birch bark.

While geographically close to major cities, such as Vancouver, the Sunshine Coast Regional District’s limited accessibility has prevented significant settlement across the region. The main industries of the region are forestry, fishing, and tourism.

Tetrahedron Provincial Park is a favorite for summer and winter activities, as it offers incredible trails for summer hiking and cycling or winter snowshoeing and skiing. The park has ten freshwater lakes to discover and explore, incredible ocean views, and stunning mountain landscapes.

There are four cabins in the park that are available on a first come first serve basis. These are located at Bachelor Lake, Edwards Lake, McNair Lake, and on the slopes of Mount Steele. The cabins are typically open year-round and many of the cabins can be accessed by crossing frozen lakes in the winter.

The picturesque harbour of Gibson’s Landing is the location of the ferry terminal. It is likely the first and last community you’ll visit while in the Sunshine Coast Regional District. The town offers shopping, strolling, and dining among the ocean and mountain views.

In addition to the local museum and art gallery, there are opportunities to enrol in cooking classes, hear guest speakers, or attend the Marine Education Centre at Gibson’s Landing If you’d like to spend more time outside, you can learn to sail or you can take to one of the many regional trails from the town, or walk along the nearby beaches and waterfront paths.

Spipiyus Provincial Park is located toward the north end of Sunshine Coast Regional District on the Sechelt Peninsula to the north of Halfmoon Bay. It only covers about 30 square kilometers (11 square miles) of land; however, it offers some of the region’s most spectacular views.

There are hikes in the park leading to the summit of Mount Hallowell as well as to a restored fire tower, which may be one of the last fire towers in the province. The tower and summit give views of the islands and fjords of Pender Harbour, the Strait of Georgia, and Vancouver Island.

Sechelt is the largest community in the Sunshine Coast. It is located halfway up the southern Sunshine Coast. Sechelt is situated along the shores of the Sechelt Inlet, and it is a fantastic home base for exploring the region.

The adjacent inlet offers sheltered waters for fishing, kayaking, boating, and free marine-access-only campsites. Trail Bay, Davis Bay, and Porpoise Bay Provincial Park are popular places to swim in the area, as are the many lakes in the region. The ocean waters also offer world class scuba diving, in addition to the land based mountain biking, hiking, or golf.

Located at the north end of Howe Sound on the Sea to Sky Highway in British Columbia, the town of Squamish is situated about 80 km (48 mi) from the ferry terminal in Gibson's. The community is a popular destination for tourists in search of outdoor adventure and recreation. Indeed, climbing and bouldering are extremely popular around Squamish.

Climbing attractions include the granite massif called the Stawamus Chief, which features over 300 climbing routes, as well as Shannon Falls, Murrin Park, The Malamute, and the Smoke Bluffs, all of which contain an additional 1,500 routes. Additionally, the area is home to over 2,500 bouldering problems that are published in local guidebooks.

Squamish is also popular for windsurfing and kiteboarding, ultra trail running, visiting Shannon Falls, river-rafting on the Squamish and Elaho Rivers, snowmobiling, hiking, mountaineering, and backcountry skiing. Also, from the nearby community of Brackendale, you can view one of North America’s largest populations of bald eagles.

The city of Vancouver is located at the south end of the Pacific Ranges about 50 km (31 mi) from the Sunshine Coast Regional District. Originally founded in 1862, Vancouver is one of British Columbia’s youngest cities; however, it is now the largest city in British Columbia.

Vancouver has a vibrant nightlife and concert scene and many young bands getting their big break on Vancouver stages. Cultural attractions to check out include libraries, museums, performing arts, and art galleries.

In Vancouver, you can check out Stanley Park, which is one of North America’s largest urban parks. Some of the popular hikes around Vancouver include St. Marks Summit, Quarry Rock, the Grouse Grind, Pacific Spirit Regional Park, Burnaby Lake Park, and the Norvan Falls Trail. 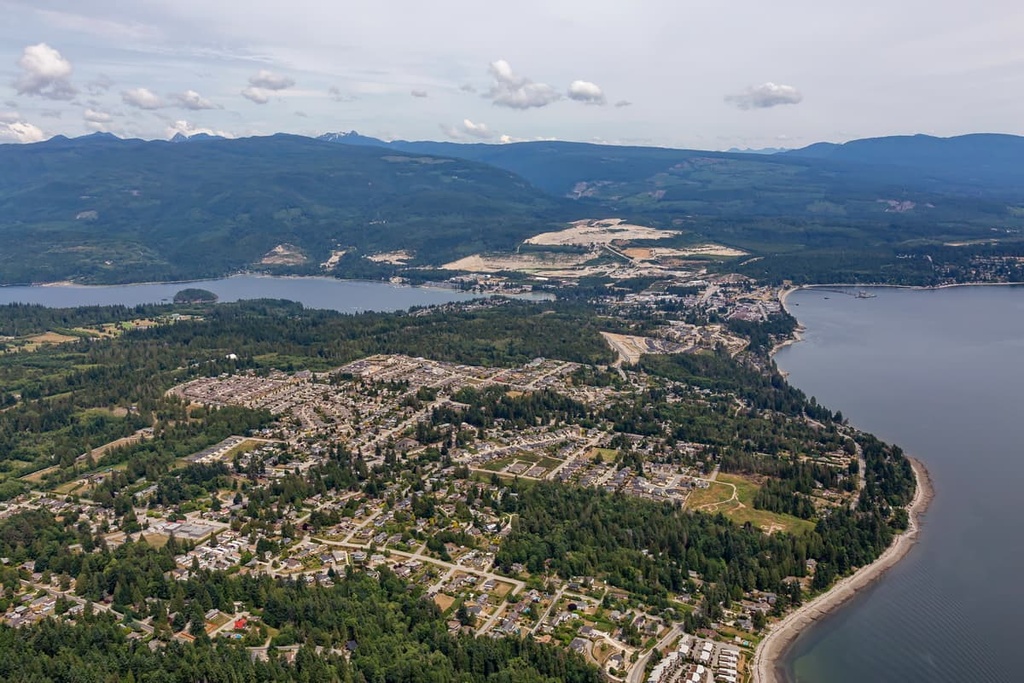 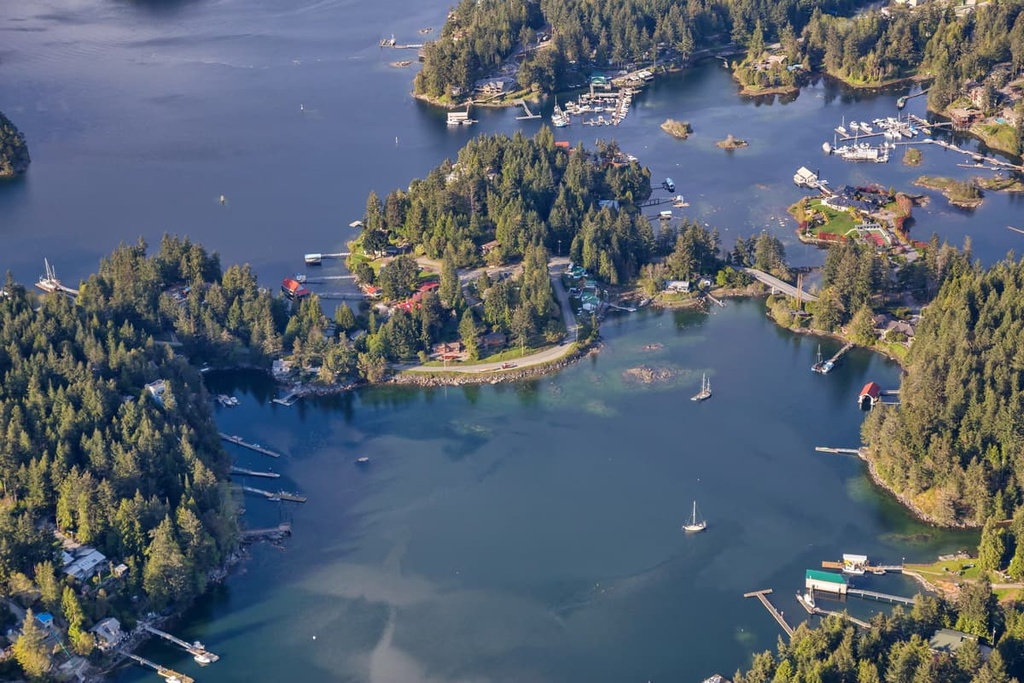 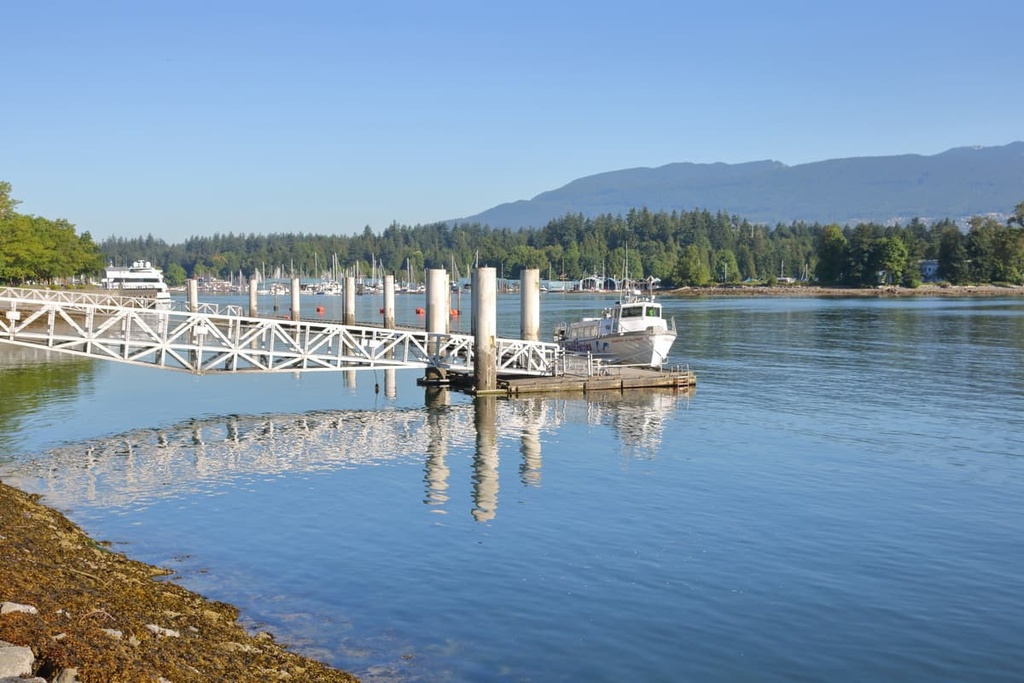 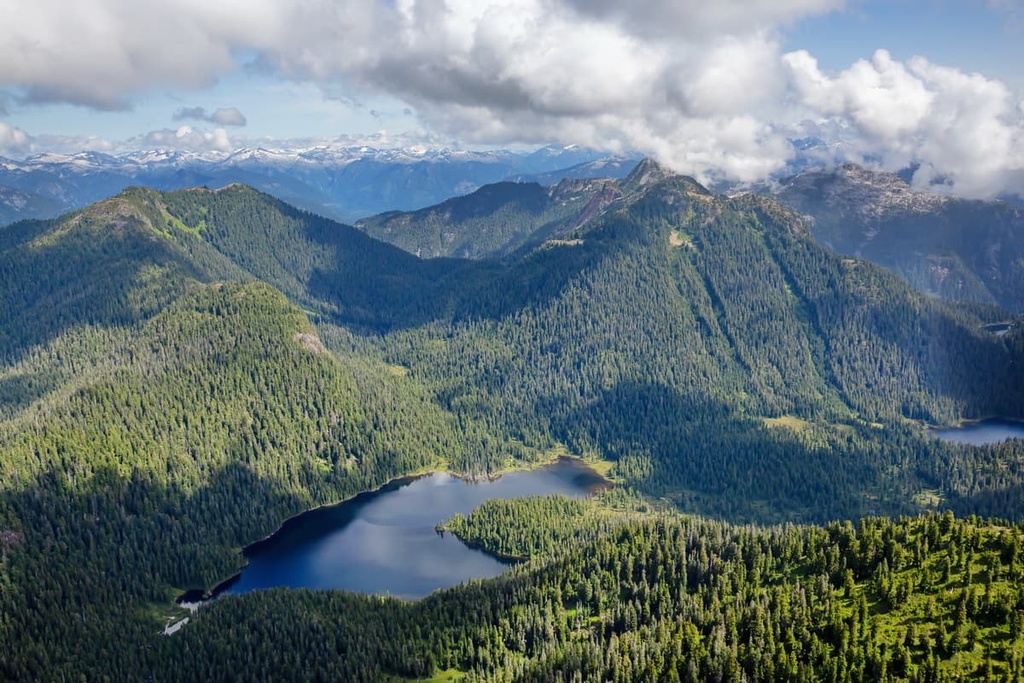 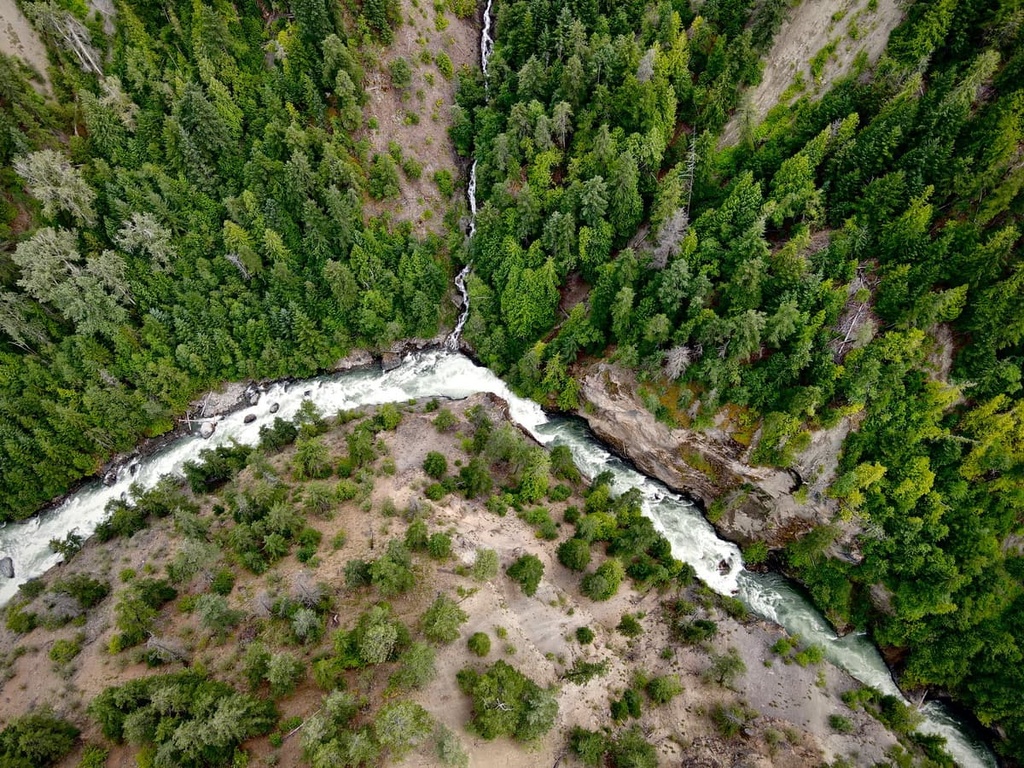