The qathet Regional District is an administrative area that includes rugged and remote wilderness and marine areas along the west coast of British Columbia, Canada. There are 90 named peaks in the district, of which Mount Gilbert is the tallest with 3,120 m (10,236 ft) of elevation and Elaho Mountain is the most prominent with 2,799 m (9,183 ft) of elevation and 1,104 m (3,622 ft) of prominence. 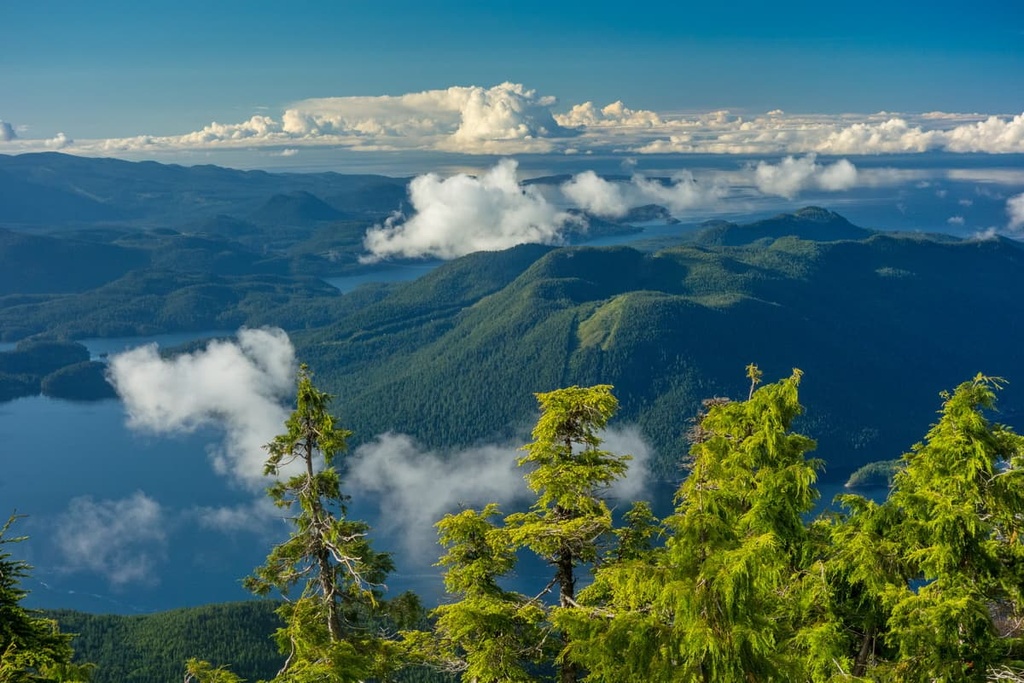 Situated along the rugged west coast of British Columbia, Canada, the remote qathet Regional District encompasses 5,075 square kilometers (1,959 square miles) of mountainous wilderness. The tallest of the 90 named peaks in the district is Mount Gilbert with 3,120 m (10,236 ft) of elevation and 484 m (1,587 ft) of prominence.

While the qathet Regional District contains several islands, such as Texada Island and Lasqueti Island, most of the district is located on the mainland of British Columbia. However, despite being a mainland district, the rugged nature of the west coast has made it such that Highway 101 is the primary highway in the region. As a result, the region is only accessible by ferry from Comox on Vancouver Island or via two ferries that travel along the mainland coast.

The qathet Regional District contains many mountains, dense forests, pristine coastal areas, and large inland lakes. The massive Powell Lake is the result of the damming of the Powell River. Meanwhile, some other beautiful lakes in the region include Inland Lake, Haslam Lake, Lois Lake, and many others.

There are also many protected areas in the region, including:

The geology of qathet Regional District is representative of the ancient Wrangellia terrane. The Wrangellia terra contains the remnants of one of most extensive accreted sections of oceanic plateau in the world where the entire volcanic stratigraphy is at least partly exposed.

Wrangellia extends as far north as central Alaska and is the source of most of the terrane along the west coast of Canada. The terrane started forming during the Devonian, about 380 million years ago, as submarine volcanoes erupted in the floor of the Pacific Ocean.

The qathet Regional District is represented by a succession of ecological zones from west to east, including the dry Coastal Douglas-fir zone along the coastal fringe, followed by the Coastal Western Hemlock zone. The Mountain Hemlock and Coastal Mountain-heather Alpine ecologies dominate the mountains, which cover the eastern end of the region.

The coastal forests in the region contain some of British Columbia’s iconic and massive Douglas firs and red cedars. These trees stand hundreds of feet tall and are dozens of feet thick around the base. The mossy trunks of the region’s bigleaf maple also stretch toward the sky, adding to the incredible canopy of the forest in the area as the land climbs from the sea.

Western hemlock transitions into mountain hemlock as the elevation rises and the understory changes from ferns to thick mosses covering the ground and rocky outcrops. Toward the tops of the mountains, the forests thin to a parkland-like environment, with open, grassy meadows and isolated stands of trees.

At the treeline, the trees in the region are primarily stunted and shaped by the fierce winds and storms into what is called krummholz. The upper slopes of the coastal mountains are filled with heather dominated communities until you reach the upper elevations around the peaks. Here, the landscape is typically rocky and barren, if not snow covered.

The qathet Regional District is the traditional territory of the northern Coastal Salish people, including the Tla’amin, Klahoose, Homalco, Comox, Pentlatch, and Sechelt First Nations.

It is estimated that people started inhabiting the west coast of Canada as early as 13,500 years ago. There are two theories for the origins of the coastal cultures that emerged after the Pleistocene, the first being that people moved up from the south as the land and waters became unglaciated. The second theory suggests a southern movement of people from the north.

The early inhabitants of the coastal region of this part of what is now British Columbia are believed to have migrated to the area as early as 10,000 years ago. Many Indigenous peoples who migrated to the region traditionally harvested salmon, herring, shellfish, and clams from the sea, as well as elk, deer, and mountain goat from the land.

The abundance of salmon and cedar in the region allowed the cultural expansion of the Indigenous communities. Starting about 6,000 years ago the modern Salish culture began to emerge as the dominant culture along British Columbia’s western coast.

While some of the region’s First Nations had made contact with European fur traders as early as the eighteenth century, the Coast Salish lived rather isolated from European influence until the mid-1800s and later.

The nineteenth century brought European settlers to the region; however, it wasn’t until 1908, when the Powell River Company Mill constructed a company town that European settlement of the area began in earnest.

Gradually, paper production at the mill decreased, leading to the laying off of hundreds of employees. The diversification of the economy that followed the layoffs led to an increased focus on ecotourism and the arts. The other small communities in the region are still dependent upon mining, forestry, and fishing.

While qathet Regional District is part of mainland British Columbia, the city of Powell River and other communities are only accessible by boat and ferry. The isolated and remote wilderness has remained in a beautiful, pristine condition and offers many wilderness adventures.

The following are some of the popular hikes and attractions in qathet Regional District:

The route has huts and campsites for accommodations as well as off-trail options available in the nearby communities. While the route is typically well maintained and well signed, the terrain and length make this a difficult hike for most adventurers.

While hiking the trail, you may encounter bears, cougars, wolves, coyotes, elk, deer, racoons, frogs, and many species of birds, such as eagles and marbled murrelets. You may also be privileged to view sea mammals like otters, seals, dolphins, sea lions, and whales.

Affectionately referred to as “The Rock,” Texada Island is the largest of the Gulf Islands, and it has a colorful history and stunning natural attractions. Some of the popular attractions on the island include:

Inland Lake Provincial Park is a protected area located to the north of Powell River. It features a 13 km (7.8 mi) wheelchair accessible trail that ventures around a lake as well as vehicle-accessible and walk-in campsites. The Model Community Project for People with Disabilities has worked in partnership with the provincial park to create this inclusive wilderness area.

In addition to the 13 km (7.8 mi) Inland Lake Loop, there is also a 16 km (9.6 mi) trail through the park to Confederation Lake. Other popular activities in the park include paddling, swimming, cycling, and fishing. The Model Community Project has worked to make the facilities, lake, and wilderness of Inland Lake Provincial Park as accessible as possible.

There are many peaks with hiking trails to their summits in the qathet Regional District. The following are some of the more accessible summits in the region:

The qathet Regional District is a remote district located along the central coast of British Columbia that is only accessible by plane, private boat, or by ferry from the mainland or Vancouver Island.

Here are some of the major cities and towns in qathet Regional District.

Powell River is the regional capital of the qathet Regional DIstrict. It is located along the shores of the Malaspina Strait. During the Fraser Gold Rush in the 1800s, gold prospectors would first need to visit Victoria for their mining permits before ferring over to Powell River on their way to the gold fields.

The city and area are only accessible by ferry or plane, as deep fjords prevent a road from being constructed to the community. Once you make it to Powell River, there are many beautiful wilderness parks and hiking trails to check out.

Inland Lake Provincial Park is a beautiful destination while visiting qathet Regional District; however, the gem of the wilderness in the area is arguably the Sunshine Coast Trail. The Sunshine Coast Trail is a 180 km (108 mi) backcountry trail that traverses the coast of qathet Regional District. It is free to access, and it winds through old growth forests, along lake shores, and along beaches for all to enjoy.

The cities of Courtenay, Comox, and Cumberland are the central municipalities of the Comox Valley. One of the few routes to Powell River is the ferry across the Georgia Strait from Comox on Vancouver Island.

During the nineteenth century, while the surrounding communities flourished with industry, Comox grew slowly and was a vacation town that offered golf, dining, fishing, hunting, tennis, and more to the affluent visitors. Thanks to the region’s beautiful beaches, clear lakes, rivers full of salmon, and incredible wilderness, tourism has grown significantly in the area in recent years.

Some of the primary attractions and trails worth checking out in Comox are the Seal Bay Nature Park, the Rosewell Creek Trail, Trent Falls, and Helliwell Provincial Park Loop. The cities also have annual festivals in the summer months that celebrate their nautical history with music, arts, and an amateur boat building competition.

Vancouver is a major city that’s located 170 km (106 mi) to the south of qathet Regional District. It is the largest city in British Columbia. There are many cultural attractions in Vancouver, including libraries, museums, performing arts, art galleries, and a vibrant nightlife.

You can visit Stanley Park, which is one of North America’s largest urban parks or the city’s beaches if you want to spend time outside. Additionally, St. Marks Summit, Quarry Rock, the Grouse Grind, Pacific Spirit Regional Park, Burnaby Lake Park, and the Norvan Falls Trail are some popular local trails that are worth checking out. 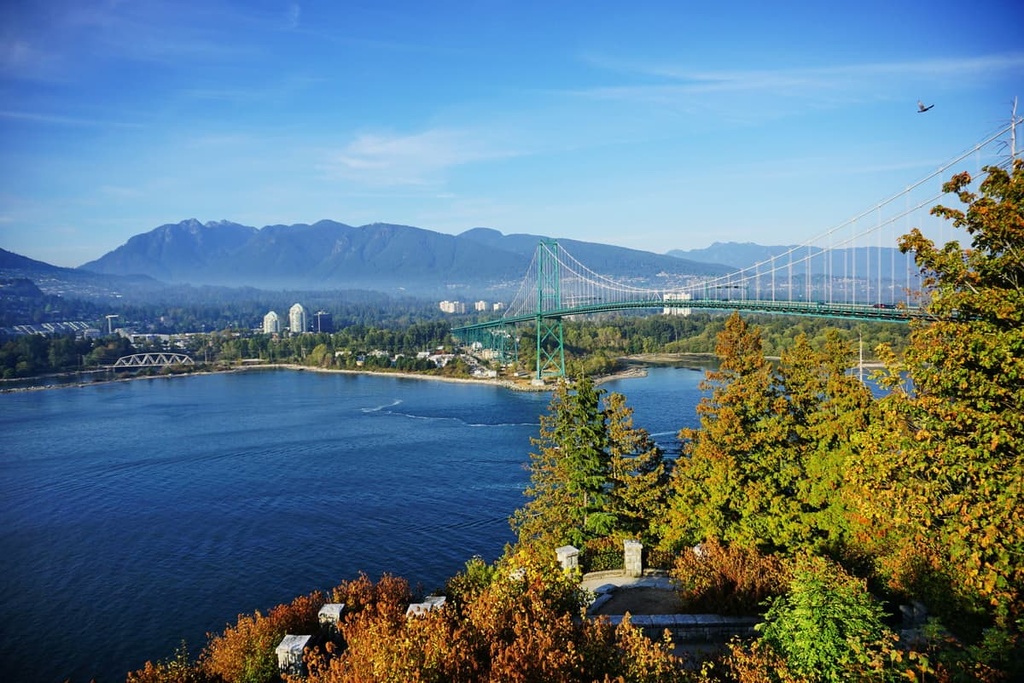 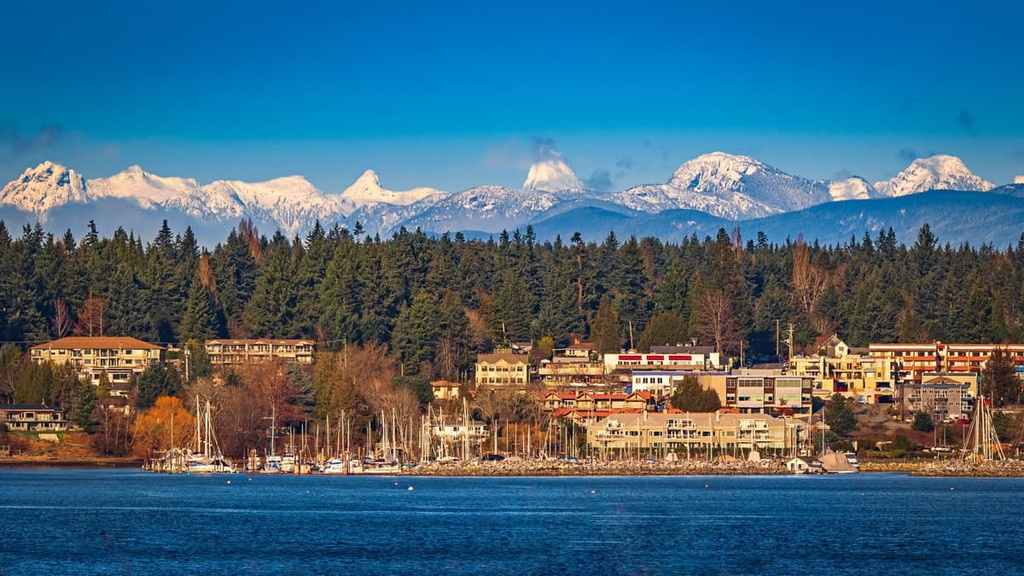 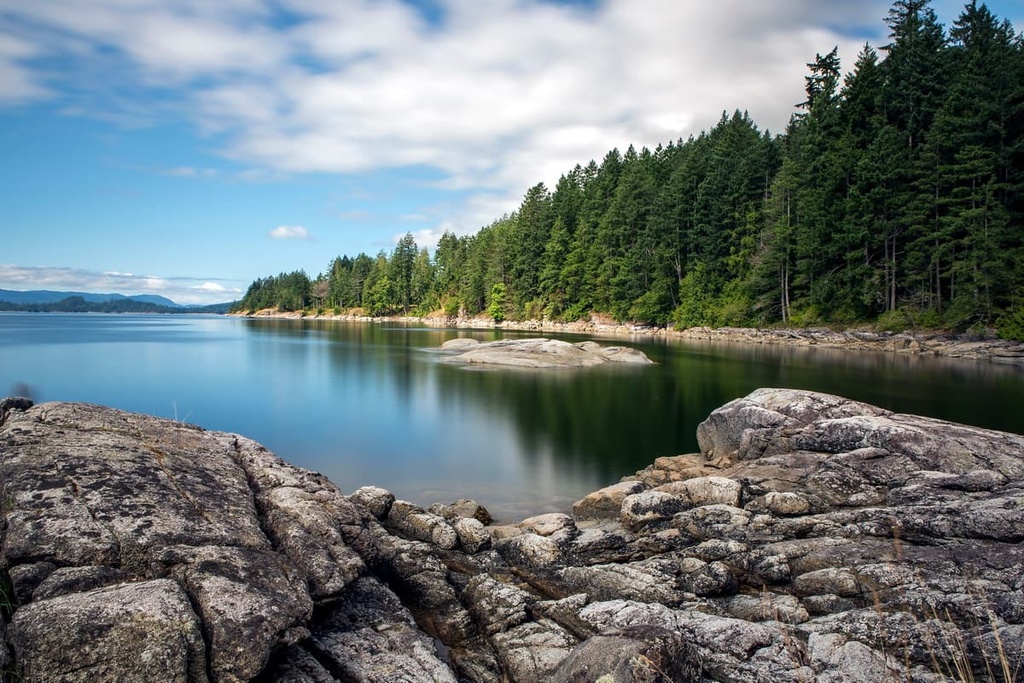 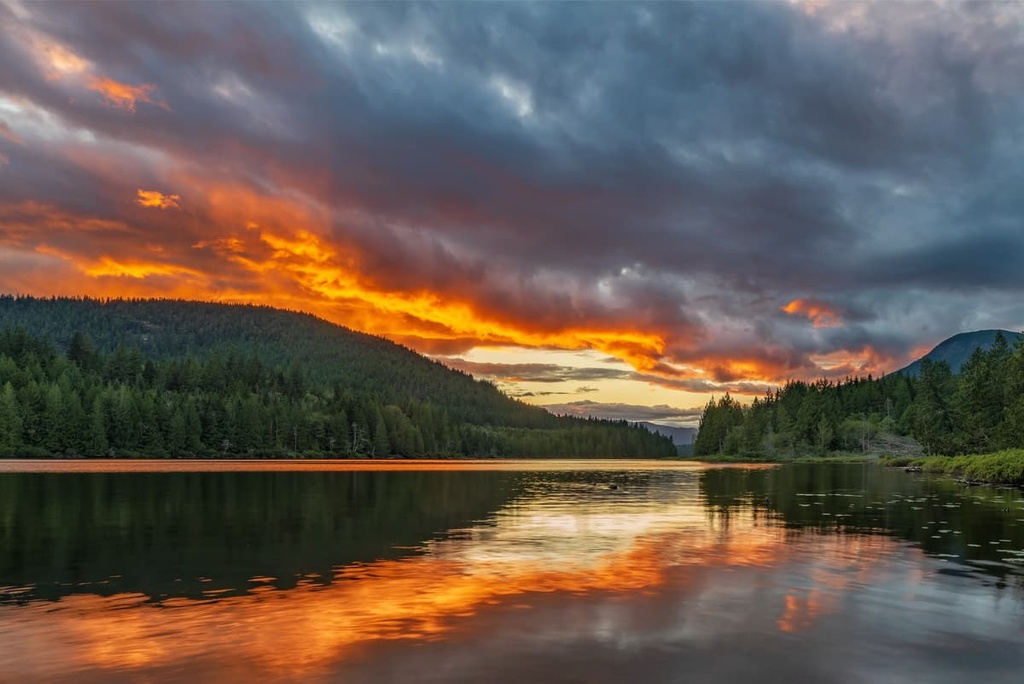 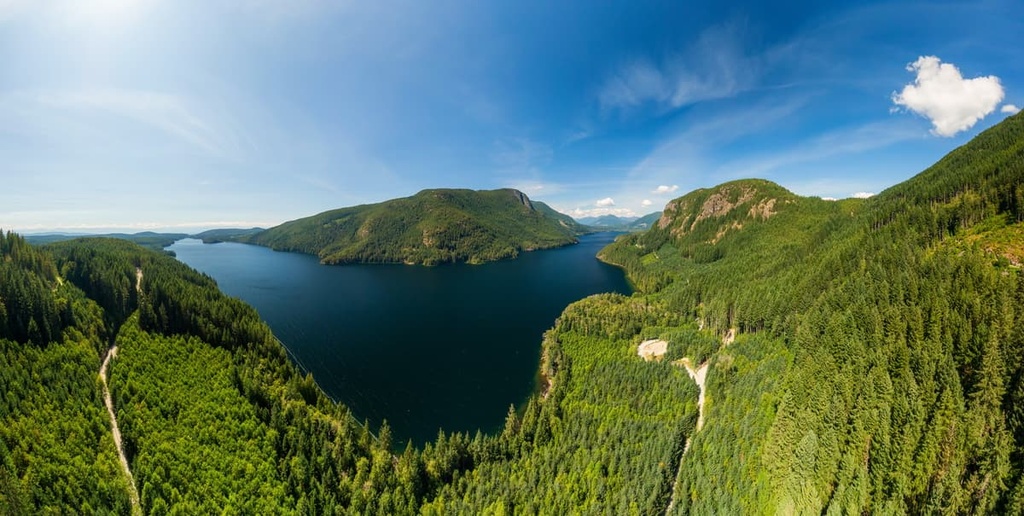 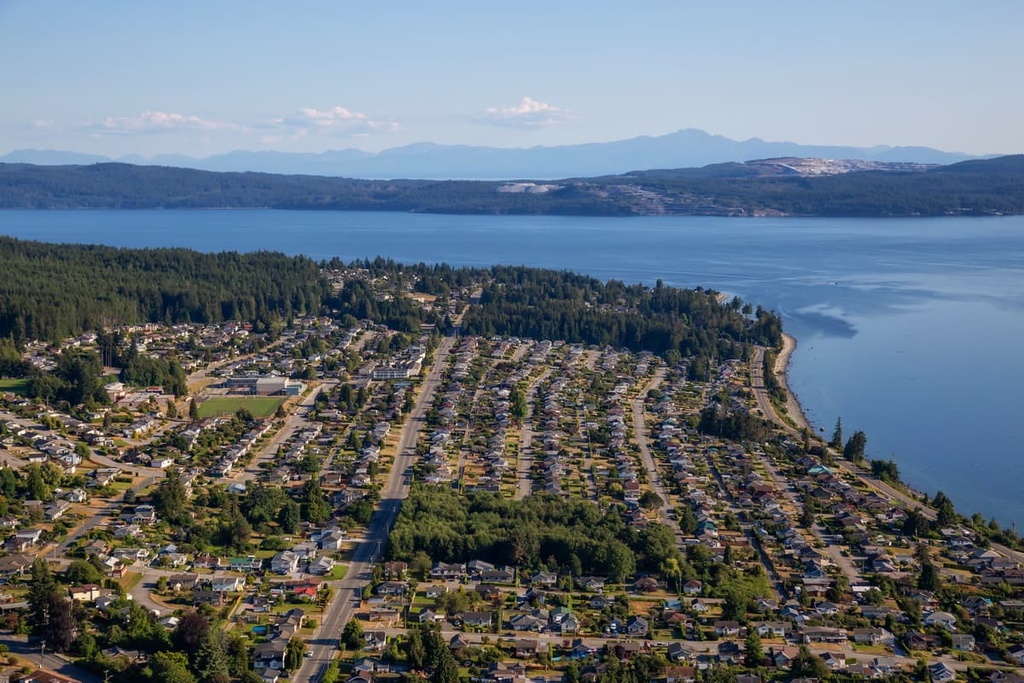