The Regional District of Nanaimo is located on the eastern coast of Vancouver Island in the province of British Columbia, Canada. It is the second most populous regional district on the island after the Capital Region around the city of Victoria. There are 32 named peaks in the Regional District of Nanaimo, the highest of which is Mount Arrowsmith with an elevation of 1,819 m (5,968 ft) and 1,426 m (4,678 ft) of prominence.

The Regional District of Nanaimo is located on the eastern coast of Vancouver Island, British Columbia. Nanaimo is the capital and largest city in the district. However, Parksville, with its beaches and parks, is a popular tourist destination in the region.

Highway 19 runs through the region, connecting Nanaimo to Victoria in the south and Courtenay and Campbell River in the north. The Georgia Strait is the waterway that separates Nanaimo and mainland British Columbia. Additionally, Gabriola Island is part of the Regional District of Nanaimo.

There are 12 regional parks with 2,072 hectares (5,120 acres) of land and 78 km (46 mi) of regional trails found within the Regional District of Nanaimo. The following are some of the many parks and natural areas within the district:

The rocks of Vancouver Island started forming 380 million years ago as undersea lava deposits. Over hundreds of millions of years, the volcanic rocks formed by these lava deposits were covered with marine sediment, though they were later covered again with subsequent lava flows.

These layers would become a landmass known as Wrangellia, which also includes the terranes that form southeast Alaska, the Queen Charlotte Islands, and part of the Coast Mountains. Following the collision of the Insular tectonic plate with the west coast of the North American plate, Wrangellia was among the final terranes to collide with and attach to the west coast of British Columbia about 100 million years ago.

The Pacific Rim and Crescent terranes accreted to the west coast of Vancouver Island between 42 and 55 million years ago and were the final terranes to be added to British Columbia.

As Wrangellia was colliding with the mainland, some of the terrane buckled to form mountains, while other parts crumbled and eroded to become layers of clastic sediment. The Western Cordillera of the Coast, Columbia, and Rocky Mountains formed, as did the mountain ranges that form the island chains.

As glaciers covered the Regional District of Nanaimo, the rest of Vancouver Island as well as the straits between the island and the mainland were covered with ice. The weight of the ice depressed Vancouver Island hundreds of meters, such that marine fossils are found over two hundred meters above the current sea level.

The glaciers eroded the layers of limestone and sandstone to create an interesting topography in Nanaimo. Additionally, the volcanic basalt pillows are fun to discover throughout the region. With a keen eye you can differentiate the different layers of sediment on the eroded riverbanks, which give a glimpse into the history of when dinosaurs roamed the earth and even further back into history.

The ecology of the Regional District of Nanaimo can be divided into three major ecozones, which are the Coastal Douglas-fir, Coastal Western Hemlock, and Mountain Hemlock. The coastline is dominated by forests of massive Douglas fir which transition into the western hemlock and finally into the mountain hemlock forests dominating the peaks.

The coastal forests contain some of the iconic, massive Douglas fir and red cedars that stand hundreds of feet tall and dozens of feet around the base. Many of the old trees show scars from the forest fires that have occurred in the area over the past couple hundred years.

The mossy trunks of bigleaf maple stretch towards the sky adding to the incredible canopy of the forest as the land climbs from the sea. Western hemlock transitions into mountain hemlock as the elevation rises and the understory changes from ferns to thick mosses covering the ground and rocky outcrops.

Columbian black-tailed deer are the most common animal to see; however, there are many more animals. Black bears, cougars, and grey wolves inhabit the region and there is a rich ecology off the coast of Nanaimo. Sea lions, sea otters, Pacific white-sided dolphins, orcas , humpback whales, and Pacific gray whales are seen in the waters off the coast of Vancouver Island.

While hiking in the island’s mountains, you may be fortunate to hear or see one of the rare island marmots. Majestic bald eagles can also be seen perched in the trees along the coast or soaring through the air.

Glaciers covered Vancouver Island until about 14,000 years ago when the ice retreated from the island and the surrounding waters. The earliest evidence of human habitation in the Regional District of Nanaimo is from about 5,000 years ago. The traditional lifestyle of hunting, gathering, and fishing was dominant in the region for thousands of years.

The Indignous communities in this area quickly found that Nanaimo has an abundant supply of food and other resources. The Nanaimo Regional District is the traditional territory of the Te’mexw Treaty Association, Hul’qumi’nm Treaty Group, K’ómoks, and the Snunyémuxw First Nations.

The Snunyémuxw, in particular, traditionally constructed longhouses in the region, some of which exist to this day. The longhouses were the first architectural structures in Nanaimo, and they measured 30 m (100 ft) long by 9 m (30 ft) wide. The longhouses provided shelter for several families over the winter in Nanaimo, with a place for sleeping and cooking.

Juan de Fuca was arguably the first European to sail along the coast during his 1592 voyage. Captain James Cook arrived on the west coast of Vancouver Island in 1778.

In 1794, the British negotiated a treaty with the Spanish for rights to Vancouver Island; however, it wasn’t until 1843 that the first European settlement was established at Fort Victoria. In 1852, coal was discovered in Nanaimo and miners were brought to settle and mine the region.

The mine continued to bring in miners and their families to work the mines and these families started settling the region. Soon, fishing, logging, milling, sandstone quarrying, and transportation industries were developed and thriving in the region. Communities were developed around Nanaimo as more coal deposits were discovered.

Between 1881 and 1925, Nanaimo experienced great prosperity as coal was the primary fuel of the Western world. The wealth from the booming coal industry and the confidence in its economic future inspired a construction boom throughout the town. There are still many examples of houses and buildings made from this period, which show Victorian, Edwardian, and Craftsman styles of architecture.

Gradually the mines closed as oil became the world’s primary fuel source; however, Nanaimo’s central location made it a hub for Vancouver Island and the development of other industries which prevented it from becoming a ghost town like many of the other coal mining towns of western Canada.

In 1950, a pulp and paper mill was built and the town had a major industrial employer once again. Shipping, tourism, and various industrial, commercial, and service industries provide jobs for the residents. Tourism is important to Nanaimo, and it is a popular port to arrive on the island as it is close to many of the beautiful parks and beaches.

The Regional District of Nanaimo is an exciting region that encompasses beautiful beaches, stunning and rugged coastal forests, fast flowing rivers, blue lakes, and gorgeous mountains. The following are some of the best locations to visit while in Nanaimo.

The Lighthouse Country Regional Trail has two loops that are 2.5 km (2 mi) and 2 km (1.2 mi) long and feature a mostly flat trail through the rare and beautiful coastal Douglas fir forest. There are benches, picnic tables, and wood carvings to enjoy while on the trail. The trail has also been made to accommodate wheelchairs and people with limited vision or limited balance with a continuous tapping rail.

There is a 3 m (10 ft) wide, 7 km (4.2 mi) trail between the beautiful coastal community of Parksville and the interior community of Coombs. Parksville is filled with many fun activities and beaches, such as Rathtrevor Beach Provincial Park, which has a massive tidal plain to explore when the tide is out.

Coombs also has its share of activities and trailheads that lead through some stunning forests and along amazing creeks and rivers. Both communities have fantastic ice cream stores to enjoy on either end of your journey on the trail.

Located only hundreds of meters off the coast from Nanaimo, Newcastle Island Marine Provincial Park is rich in history, culture, and entertainment. Since the 1930, locals and tourists have been visiting the island for hiking and camping, arriving in their own boat or via the ferry service from Nanaimo.

The shores are dominated by imposing sandstone cliffs and ledges which are interspersed with sunny beaches. The interior of the island is studded with bigleaf maple, Garry oak, massive Douglas fir, and the unusual Arbutus. There is an extensive network of trails to the various historic areas of the island, including the subtle remains of at least two Salish villages that long predate the region’s settlement by Europeans.

In 1931, the Canadian Pacific Steamship Company purchased the island to develop it as a recreation resort, building a dance pavilion, a teahouse, picnic areas, change houses, a soccer field, and a wading pool. A ship was moored off the coast to serve the island as a floating hotel. While the floating hotel has moved on, the park is still open for camping, hiking, picnicking, and playing, with the amenities that were constructed for the posh resort the island once was.

The capital of the region, Nanaimo was established as a coal mining town in the middle of the nineteenth century. Nanaimo hosts one of the major ports for Vancouver Island, with ferries shuttling thousands of passengers daily to and from mainland British Columbia. Nanaimo also has a regional airport with flights to and from major destinations, such as Vancouver, Calgary, and Victoria.

While in the city, there are many houses still standing that were built during the town's boom time in the early twentieth century. Many historic houses and buildings feature Victorian, Edwardian, and Craftsman architecture.

Some of the nearby places to visit and hike are Mount Benson, Westwood Lake Park, and the Morrell Nature Sanctuary. Newcastle Island Marine Provincial Park is an island that is several hundred meters from the Nanaimo coast and offers camping, hiking, picnicking, and many other activities.

Located 40 km (24 mi) north of the city of Nanaimo, Parksville is a coastal community that is popular for the beautiful beaches that grace its shores. Rathtrevor Beach Provincial Park is a beautiful park with many campsites, a BMX pump track, stunning rocky beaches, peaceful woodlands, and long tidal sand flats to play on and beachcomb.

The community of Parksville has stores and services for all your needs as well as plenty of restaurants serving fresh seafood and other fare for those days you don’t want to cook for yourself. Parksville is also close to the community of Coombs, which has the popular Goats on the Roof store, as well as trailheads to many beautiful riverside and forest hiking trails.

Victoria was the first European settlement that was built on Vancouver Island. It is also the current seat of the provincial government of British Columbia. Victoria has an international airport that services the island, as well as a major seaport that receives thousands of people daily. 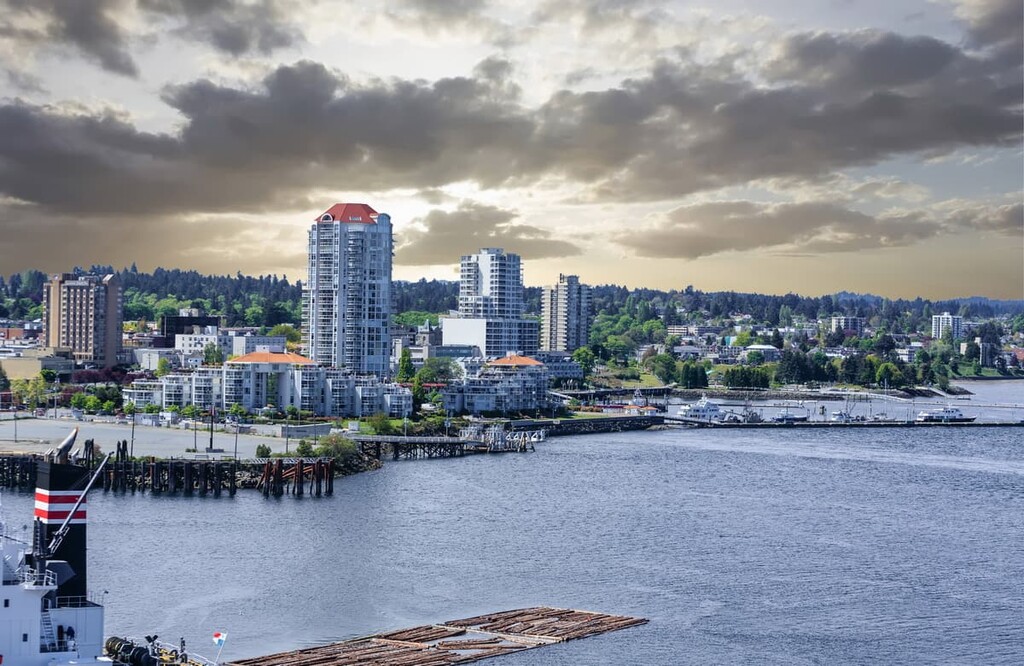 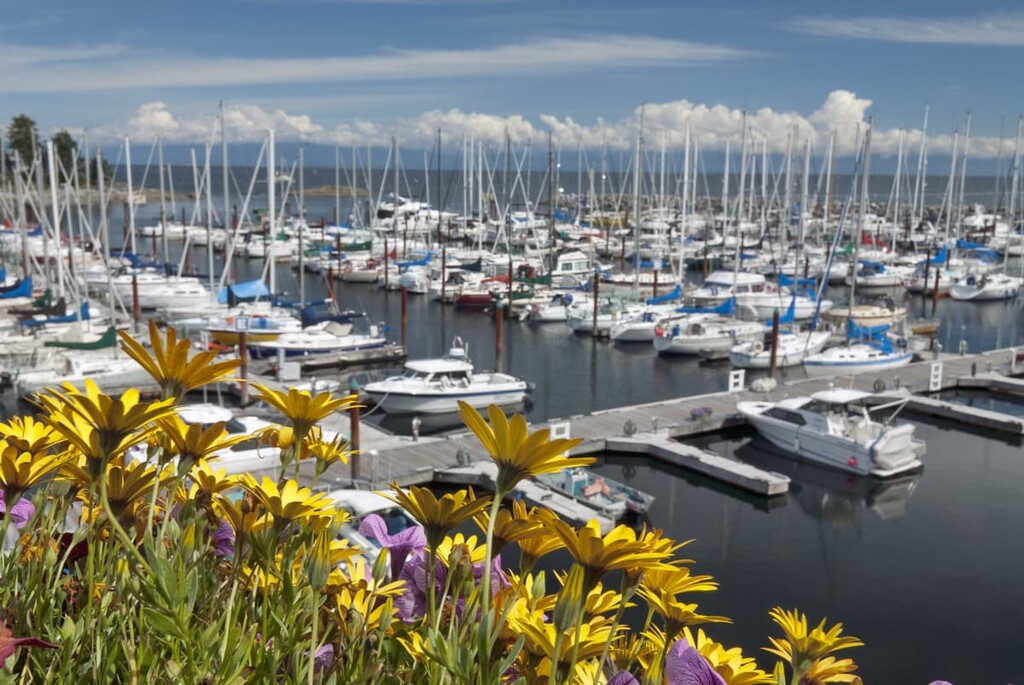 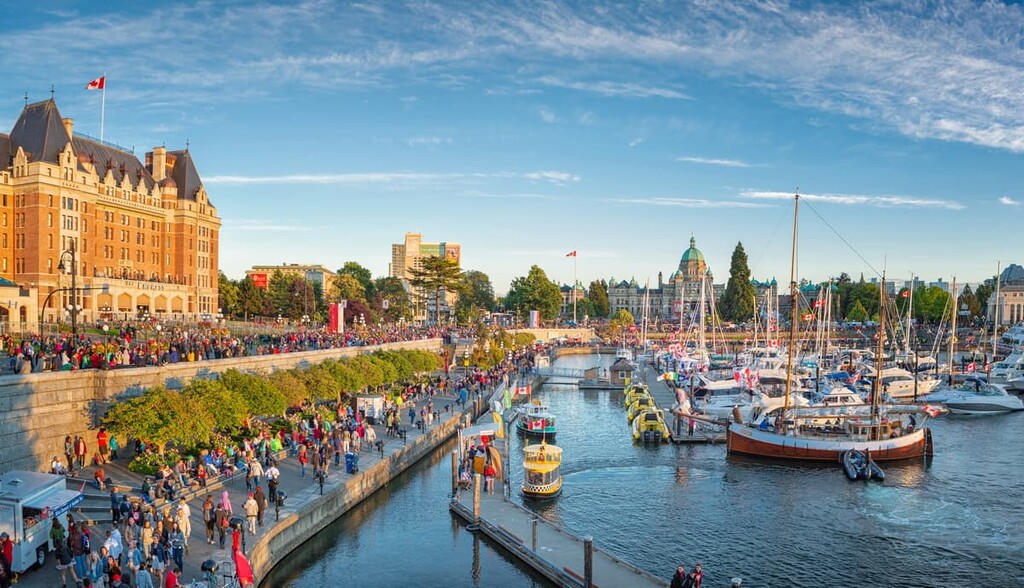 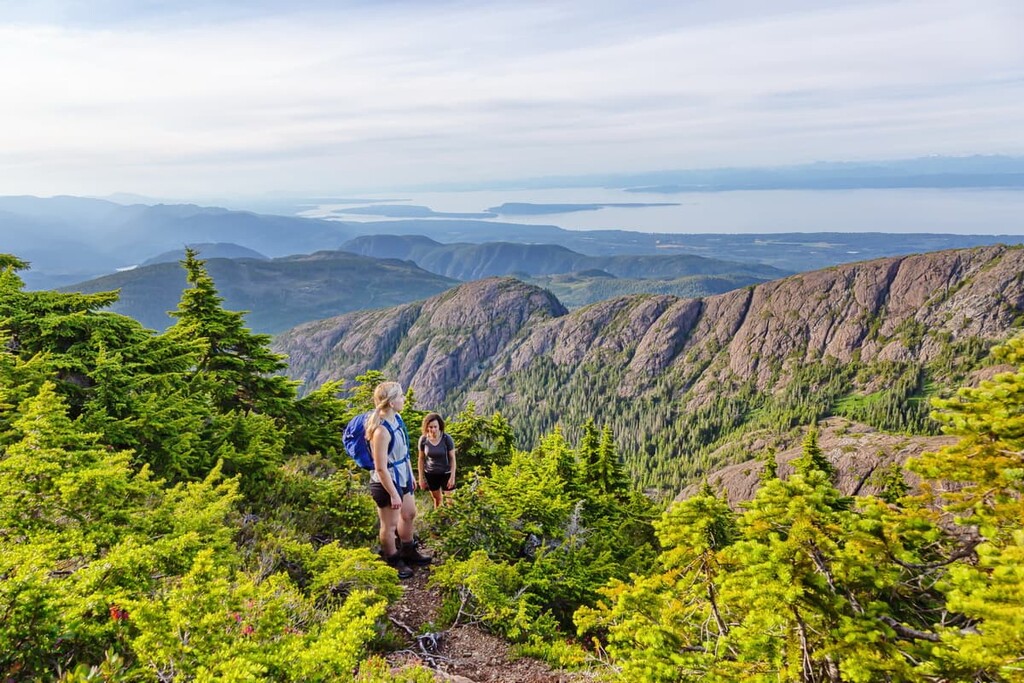 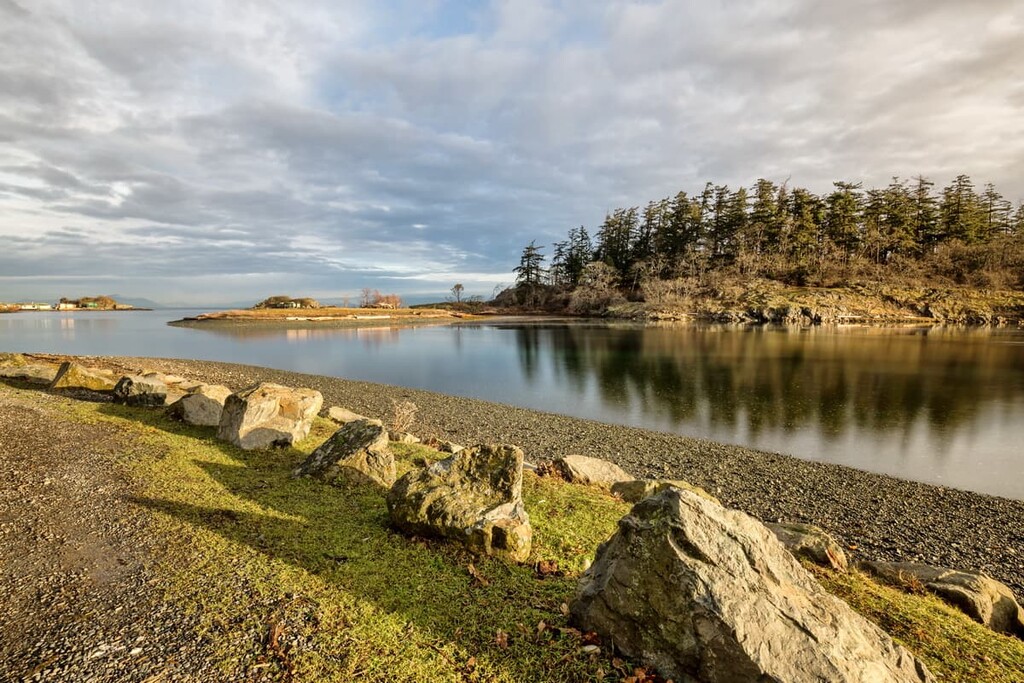 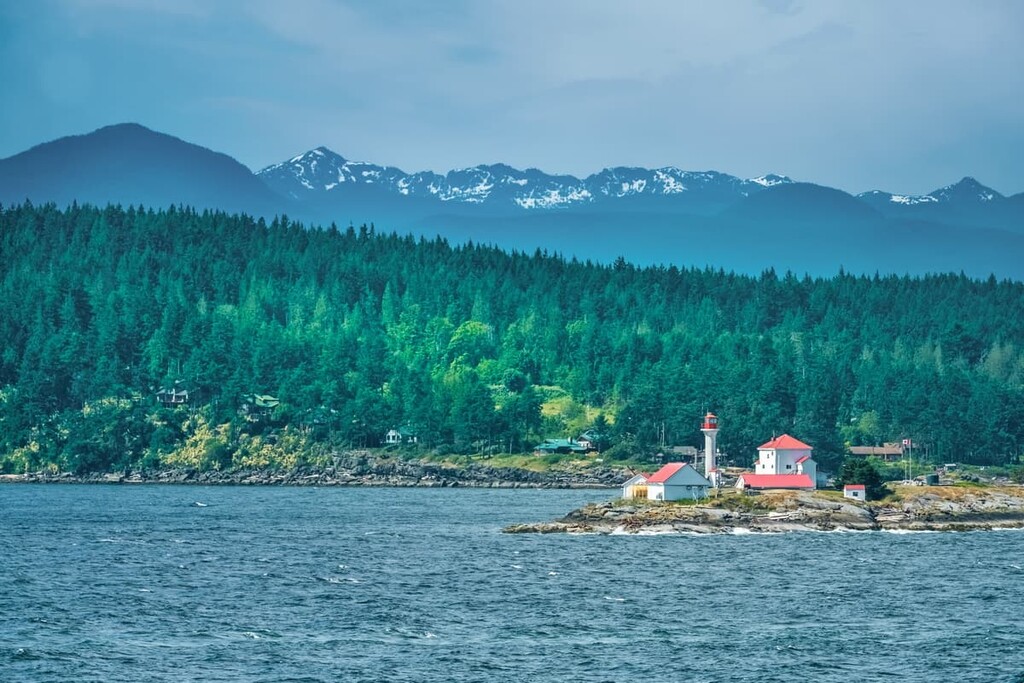