The Pine Valley Mountains are a chain of peaks situated in the southwestern corner of the US state of Utah. The tallest and most prominent peak in the range is Signal Peak at 10,371 ft (3,161 m) in elevation and with 4,508 ft (1,374 m) of prominence. 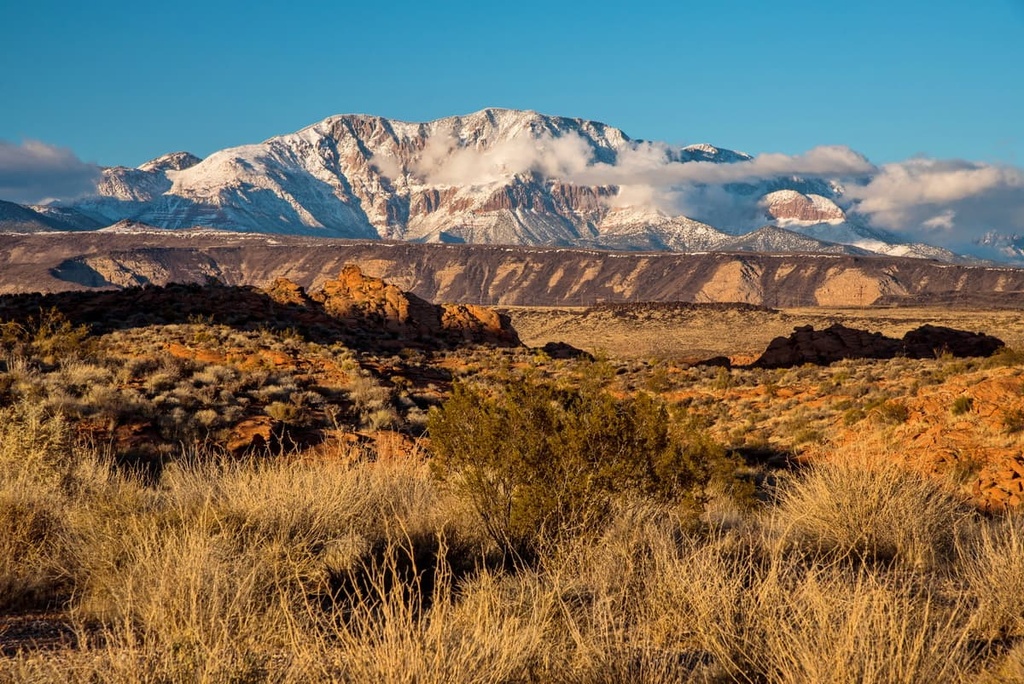 The Pine Valley Mountains are a collection of peaks located in southwestern Utah, near the state’s border with Nevada and Arizona. The range spans 35 miles (56 km) from north to south and 28 miles (45 km) from east to west.

In total, the mountains cover 591 square miles (1,530 square km) of land. The peaks within the range form the Pine Valley Laccolith, which is one of the largest laccoliths (dome-shaped mass of igneous rock) located within the US.

The peaks of the Pine Valley Mountains mark the eastern border of the Great Basin Ranges, and they also straddle the Great Basin watershed. To the south of the range lies the watershed from the Virgin River, which is a tributary of the Colorado River that runs through Zion National Park.

The peaks within the Pine Valley Mountains are part of the larger Great Basin Ranges, which extend throughout much of Utah, Nevada, Idaho, Oregon, and California.

The Pine Valley Mountains consist primarily of rock from the Pine Valley Laccolith. This laccolith was created over the course of 20 million years of volcanic activity when thousands of feet of volcanic magma were deposited on the Claron Formation. This thick layer of magma sealed off many volcanic vents, forcing subsequent magma to be pushed along a seam of the Claron Formation, forming the laccolith in the process.

Millions of years of erosion exposed the laccolith as recently as 1 million years ago. Meanwhile, the volcanic cinder cones throughout the range date back about 20,000 years. Around this time, lava dammed the Santa Clara River, which subsequently created a lake. The sediments that once filled the lake can now be found throughout the Pine Valley Mountains.

The ecology of the Pine Valley Mountains is similar to that of much of southern Utah. Forested patches in the region are often interspersed with vast meadows and desert landscapes.

The forest along the hillsides of the range generally consists of spruce and fir trees. Old-growth Engelman spruce can also be found throughout the range. All of the conifer species found in Utah grow within the range, with the exception of lodgepole pine.

Though the Pine Valley Mountains appear to be ecologically similar to other nearby ranges, it is actually one of the most diverse ranges in the state when it comes to plant biodiversity. Nearly 1,000 plant species have been discovered in the range including the bitter cherry, common sandweed, and Lemmon’s onion.

Human history on the land in and around the Pine Valley Mountains dates back at least 10,000 years. The Ute people traditionally inhabited much of the region long before the arrival of European settlers.

Over the years, the Great Basin region has been inhabited by numerous Indigenous groups and tribes. Many tribal nations, including the Ute Indian Tribe, Eastern Shoshone Tribe, Confederated Goshute Tribes of the Goshute Reservation, Skull Valley Band of Goshute, and Shoshone-Bannock Tribes consider the region to be part of their ancestral homelands. The Ute Indian Tribe has ancestral lands that extend throughout much of what is now called Colorado and Utah.

Though the Ute people had contact with the Spanish as early as the 1590s, it wasn't until the early 1800s that the first settlers of European descent arrived in the region. Many of the early European settlers of the region were fur trappers who often ventured into the region’s many mountain ranges.

In the 1820s, Brigham Young sent a large group of Mormons into what is now called Utah. This group believed they were claiming their promised land by settling in the region.

Settlers began to establish small communities during this time, many of which would grow into the largest communities within the state of Utah. Though fewer settlers chose to travel to southern Utah, a number of smaller communities were established in the southern part of the states.

Conflict between the Mormon settlers and the Ute led to the Walker War during the mid-1850s. American troops subsequently killed and forcibly removed many Ute from their ancestral lands, forcing them onto a reservation that represents just a small fraction of their traditional territory.

Not long after, in 1905, the Dixie National Forest was established to manage the region’s forestry resources. The Pine Valley Mountain Wilderness was later established in 1984.

The Pine Valley Mountains are home to numerous hiking trails. Here are some of the most popular hiking trails in the range:

One of the most popular trails in the Pine Valley Mountains is Whipple Trail. The route is 10.6 miles (17 km) long with 2,834 ft (864 m) of elevation gain. This trail climbs steadily through the range’s dense forest, following a small stream along the way.

From the top of the hike, visitors can look out over a stunning forested valley within the Pine Valley Mountains. The Whipple Trail can also be completed during the late spring with the use of snowshoes or microspikes.

The first portion of the hike follows along a creek with a slow gradual incline. Meanwhile, the second half of the ascent climbs steeply up switchbacks before reaching the summit of Burger Peak. From there, hikers have panoramic views of the rolling foothills and valleys that dominate the region.

From the summit, hikers have views of the Colorado Plateau and Hurricane Valley. Throughout the hike, visitors are also treated to views of interesting rock formations and unique regional flora and fauna.

Looking for a place to stay near the Pine Valley Mountains? Here are some of the best cities and villages to check out in the region:

Located just to the northeast of the Pine Valley Mountains lies the community of Cedar City, Utah. Home to Southern Utah University, the city has a population of around 35,000 people, making it one of the largest cities in southern Utah.

The city of Las Vegas, Nevada is located just two hours to the southwest of the Pine Valley Mountains. With a metro population of 2.2 million people, Las Vegas is the most populous city in the entire state of Nevada. Known as the Entertainment Capital of the World, and home to massive casinos and resorts, Las Vegas is a hub for tourists from all over the world.

Despite its numerous luxury hotels, Las Vegas is also an excellent basecamp for a number of national forests, wilderness areas, and national parks. Routes for trail running, hiking, and mountain biking surround the busy city and Zion National Park is only a three-hour drive away. 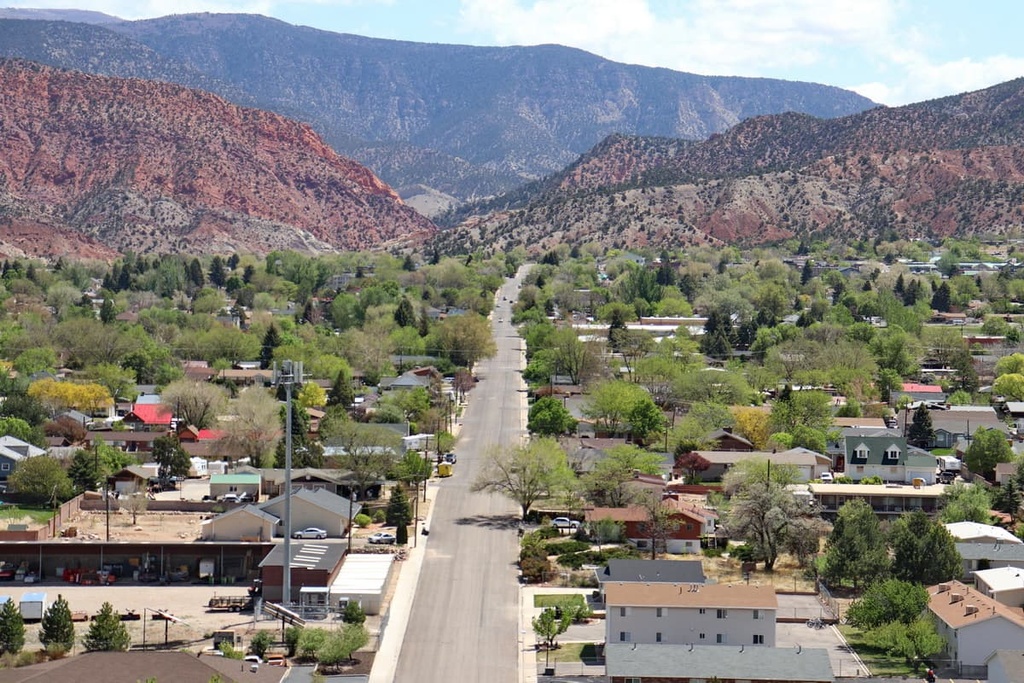 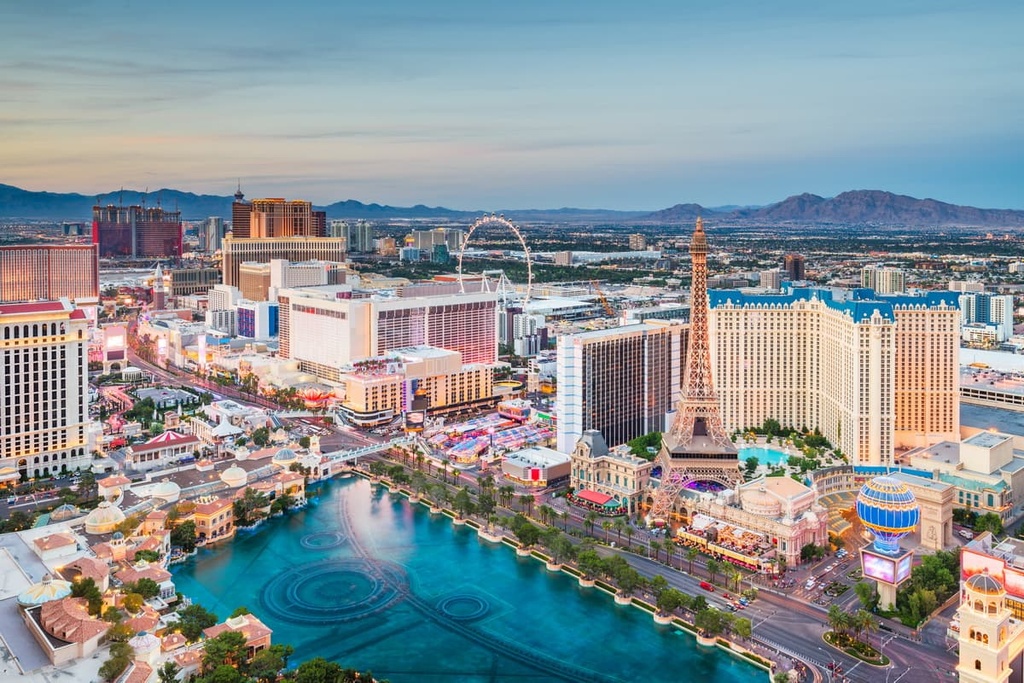 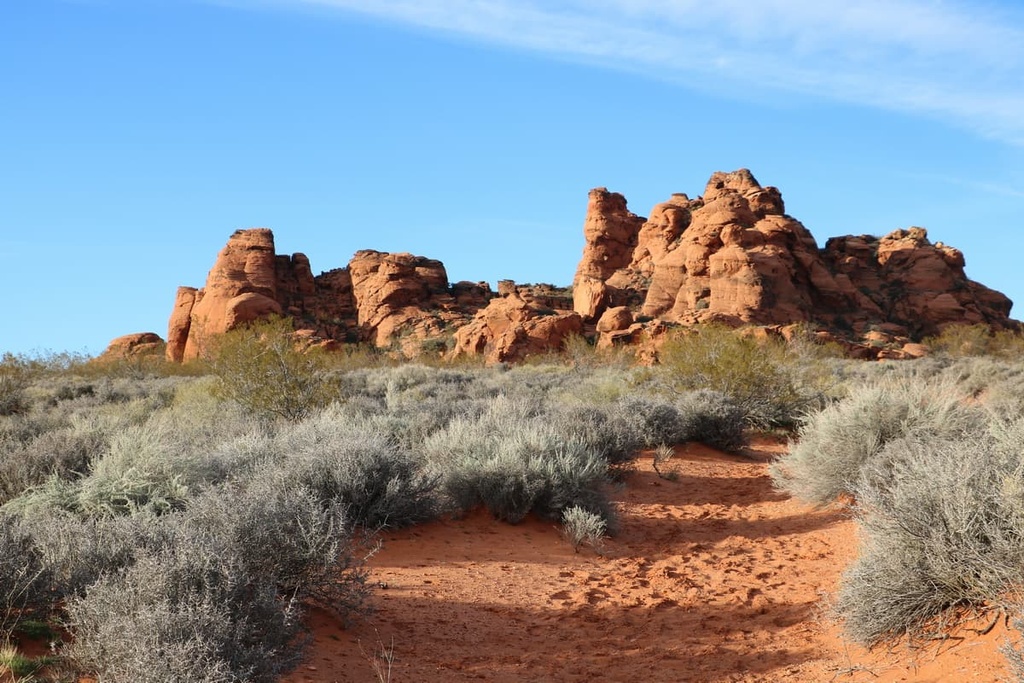 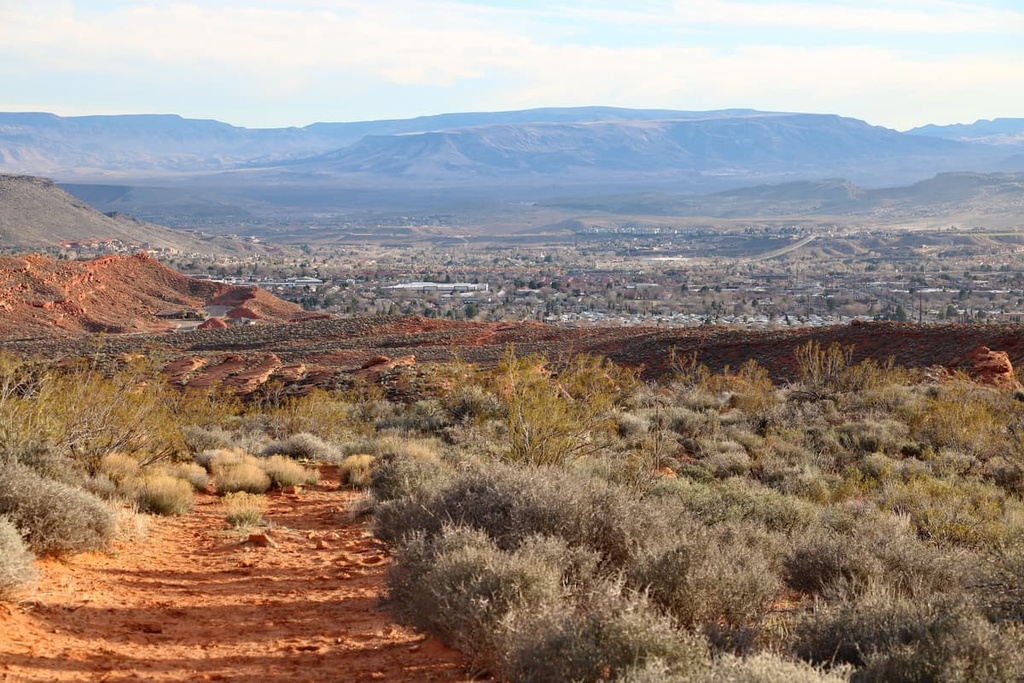 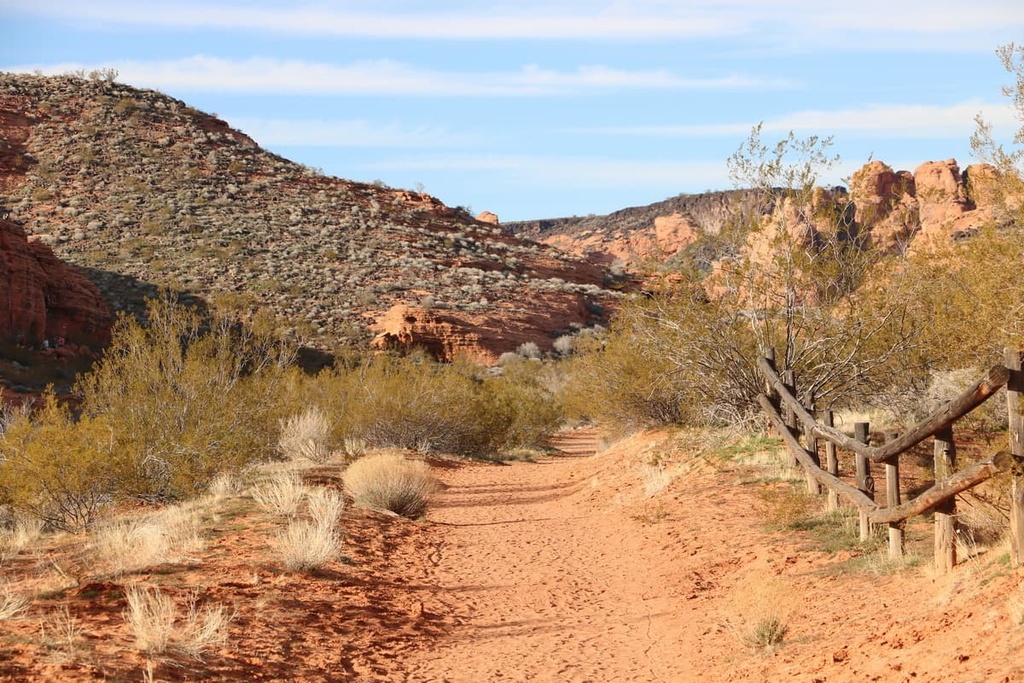 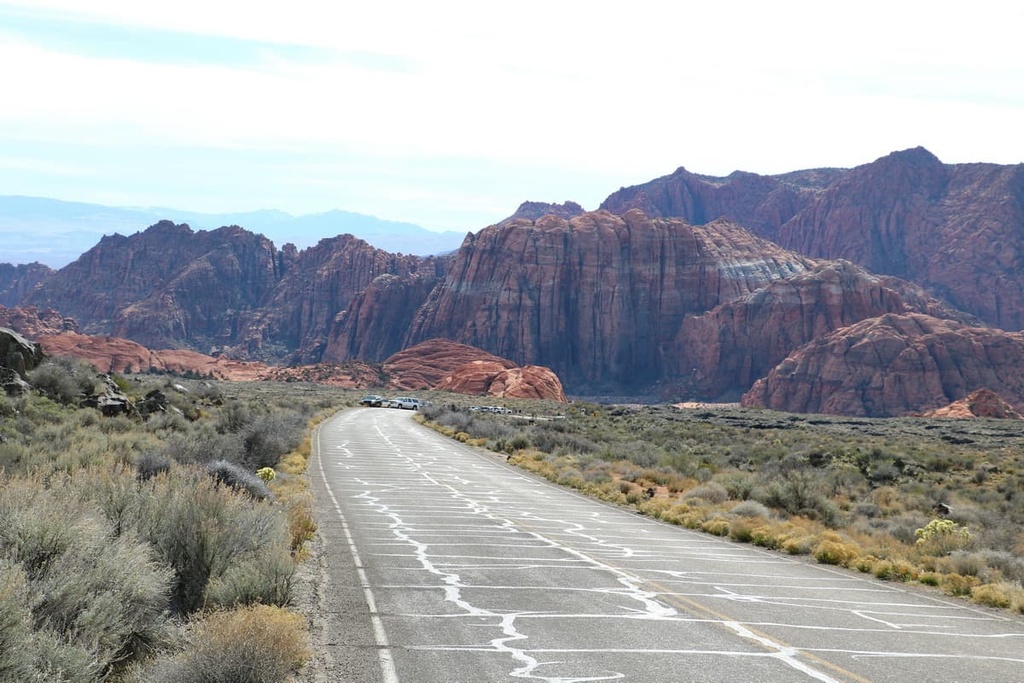 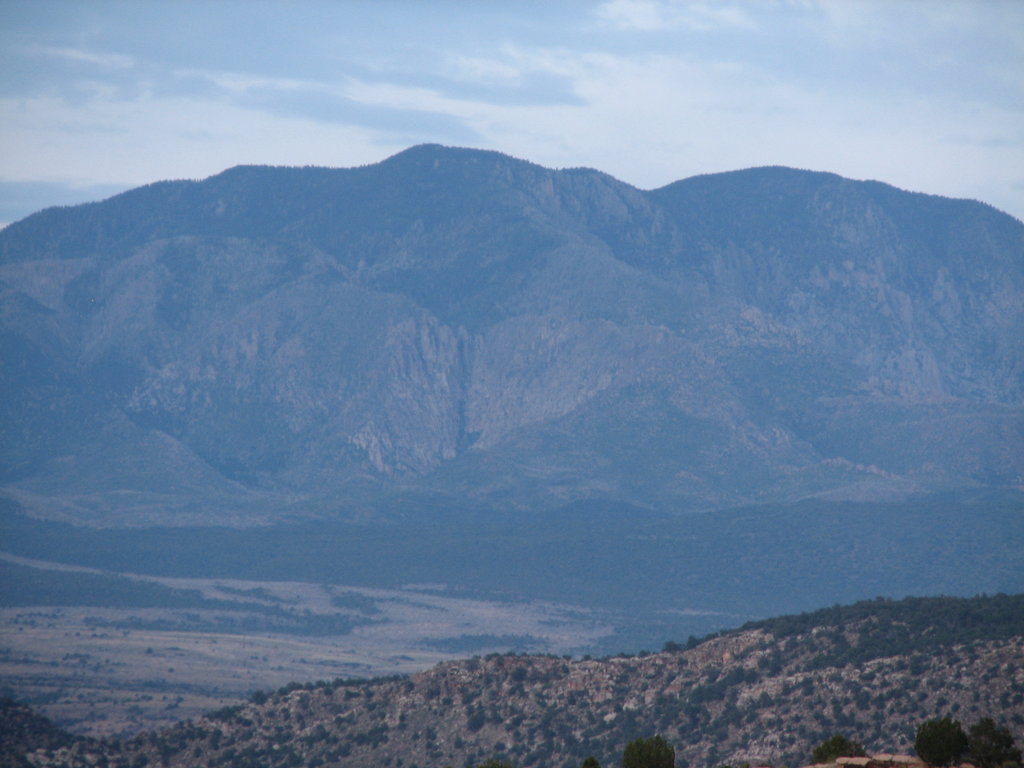