Dixie National Forest spans nearly 2 million acres (809,370 ha) across southern Utah, making it the largest national forest in the state. The diverse and stunning landscape of the national forest also lies along the divide that separates the Colorado River and the Great Basin.

Elevations in the forest range from lows of around 2,800 ft (853 m) up to the summit of Brian Head at 11,309 ft (3,447 m). Numerous canyons and red rock formations define the lower elevations in the national forest.

The national forest is often divided into four major regions that are defined by their geographic areas. These regions include the Aquarius, Markagunt, and Paunsaugunt plateaus along with Boulder Mountain, which is part of the Aquarius Plateau. The Aquarius Plateau is the highest elevation timber plateau in all of North America.

Boulder Mountain makes up around half of the Aquarius Plateau, which itself is one of the largest high elevation plateaus in the country. Hundreds of small alpine lakes dot the landscape around the mountain, and many of these lakes are found between 10,000 and 11,000 ft (3,048–3,353 m) in elevation.

The Pine Valley Mountains lie in the western portion of Dixie National Forest, just to the north of the city of St. George. The vast section of the forest is home to a wide range of geographic features including rivers, streams, dense forest patches and sweeping red rock canyons.

Additionally, Dixie National Forest is surrounded by other popular outdoor recreation areas. This includes the Red Mountain Wilderness Area and Red Cliffs National Conservation Area to the south, Zion National Park to southeast, Fishlake National Forest to the northeast, and the Grand Staircase-Escalante National Monument to the south.

Dixie National Forest lies between the Great Basin Ranges to the north, and the Colorado River to the south. The region's geological history is closely intertwined with the Aquarius, Markagunt, and Paunsaugunt Plateaus.

The Colorado Plateau is known for being a relatively stable geological feature due the fact that it experienced minimal folding over the past 600 million years. However, the region was uplifted to its current height by tectonic movements.

The thrusting that uplifted the region also steepened the grades of the rivers, resulting in more powerful bodies of water. The shale and sandstone landscape was exposed and eroded away by these rivers over the course of millions of years, leaving behind the rugged landscape seen today.

The deep canyons found in the red rock region of the forest also showcase the widespread erosion that took place over the last few millions of years. Additionally, glaciers once dominated the higher elevations within Dixie National Forest. As temperatures rose, glacial retreat further carved out the landscape, leaving behind sweeping alpine meadows and valleys.

The drastic changes in elevation found within Dixie National Forest allow for a variety of both flora and fauna to thrive.

Fauna found in the forest is similar to that found in much of the surrounding region. Cougars, bobcats, and Utah prairie dogs inhabit the land in the national forest alongside wild turkeys, antelopes, and cottontail rabbits. Golden eagles and blue grouse can also often be spotted flying overhead.

Humans have inhabited the region in and surrounding Dixie National Forest for thousands of years. Cultural artifacts and petroglyphs found on the Aquarius Plateau portion of the forest date back around 2,000 years.

The Indigenous peoples of the region would traditionally migrate throughout the land with the changing of the seasons to avoid some of the extreme weather found on the Colorado Plateau. Many of these groups lived harmoniously, sharing a deep respect for the land.

The first people of European descent to arrive in southwestern Utah came during the 1770s. Many of these people passed through the region in the hopes of finding a route that could connect present day New Mexico and California.

In the following decades, a group of Mormons were sent to Utah by Brigham Young in order to claim what they believe is their promised land. The first group settled in northern Utah during the early 1800s and would go on to establish communities throughout the state by the mid-1800s.

Dixie National Forest is home to numerous hiking trails and outdoor recreation opportunities. Here are some of the top hiking areas to visit in the forest:

The Yant Flats Trail is arguably the most popular hiking route in the forest. The trail follows along the southern slopes of the Pine Valley Mountains. It is 3.4 miles (5.5 km) long and it has 337 ft (103 m) of elevation gain.

The rocky landscape along the trail showcases the many layers of the Colorado Plateau. These rocks have been heavily eroded, leaving behind the canyons, gorges, and outcroppings marbled appearance that dominates the region to this day.

The trail to Cascade Falls showcases the changing landscape found throughout the national forest. The route travels along a vibrant red rock canyon while passing through patches of pine trees.

The trail is 1.2 miles (2 km) long with 137 ft (42 m) of elevation gain. Though the falls only flow during wetter months of the year, the route can be completed throughout the year and still provides stunning views of the surrounding landscape. Hikers should note that there is no guardrail along the trail, which features steep cliff sides.

True to its name, this trail showcases various rock outcroppings, arches, and unique rock formations. The short loop is just 0.6 miles (1 km) in length and has 187 ft (57 m) of elevation gain. This trail offers hikers stunning views with fewer crowds compared to other nearby red rock hikes.

Navajo Lake is just one of the hundreds of lakes found within Dixie National Forest. The route follows along the edge of the lake, and it winds through the forested landscape while offering many opportunities for fantastic views.

Hikers on this trail can also climb to the summit of nearby Andy Nelson Peak for more panoramic vistas. The loop trail is 8.6 miles (14 km) in length and it has 554 ft (169 m) of elevation gain.

Looking for a place to stay near Dixie National Forest? Here are some of the best cities and towns to check out in the region.

St. George lies in the southwestern region of Dixie National Forest. The city is home to around 70,000 residents and it is home to Dixie State University. St. George is surrounded by a diverse landscape that allows residents to enjoy outdoor activities throughout the year. Both Snow Canyon State Park and Zion National Park are located near the city, too.

There are many trails located near St. George that allow for hiking, mountain biking, trail running, canyoneering, and skiing during the winter months. The city is also full of local shops and restaurants along with the Tuacahn Amphitheater and Southwest Symphony Orchestra.

Just to the northeast of St. George lies Cedar City, which is home to the headquarters of the Dixie National Forest. The city has a population of around 35,000 people and is home to Southern Utah University.

Not only does the city lie on the edge of the forest, but it is also next to the northern part of Zion National Park, so it’s a great place to visit if you’re interested in hiking through the region’s red rock landscape.

Besides the stunning surrounding landscape, Cedar City is home to the Utah Shakespeare Festival, Utah Summer Games, and Simon Fest Theater. There are also plenty of local shops and restaurants in the small downtown region of Cedar City that are well worth visiting after a long day of hiking. 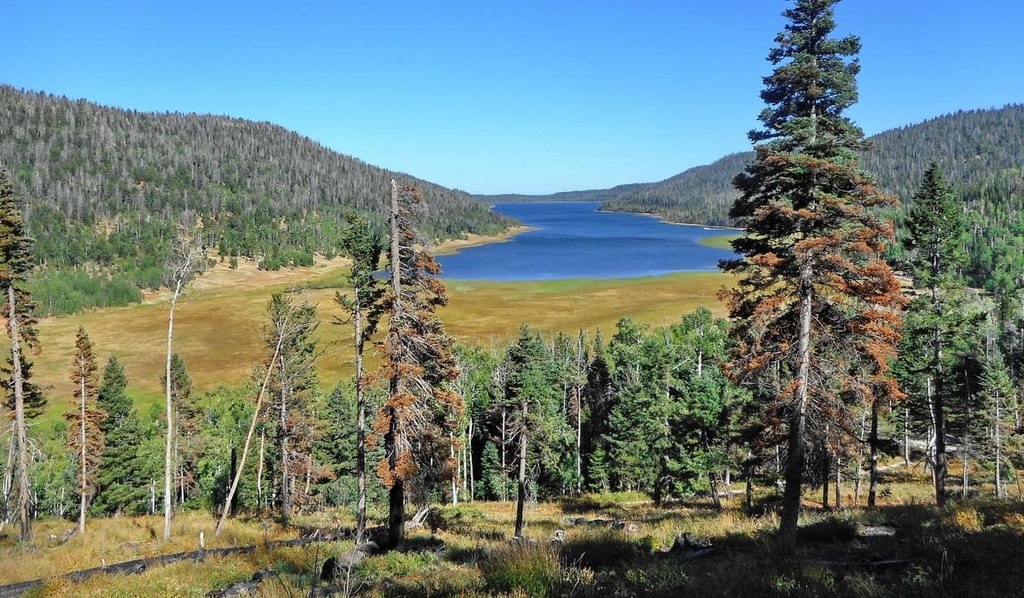 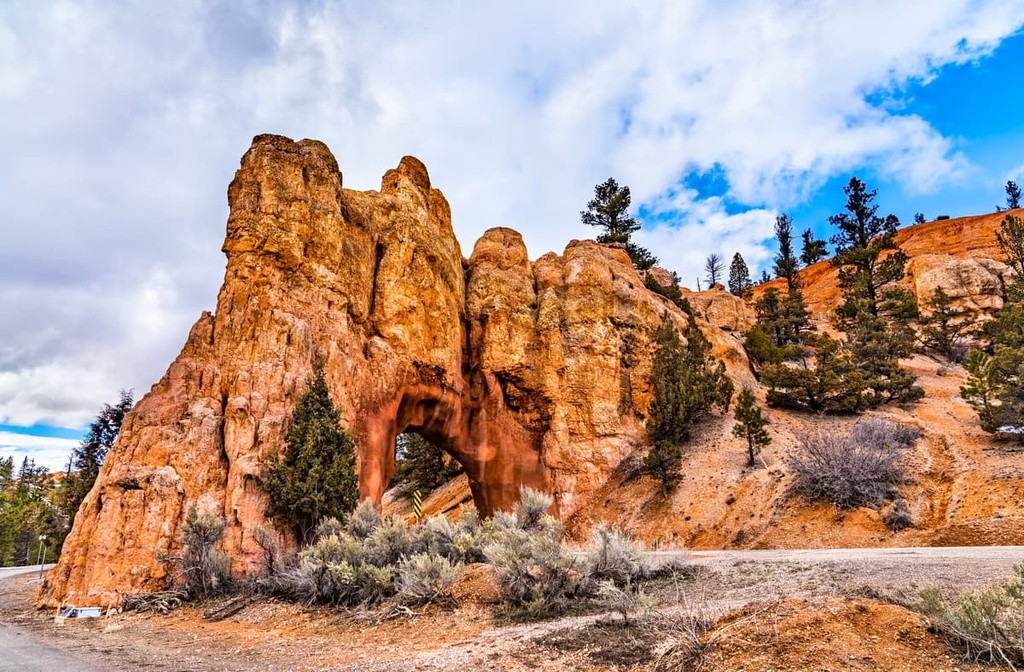 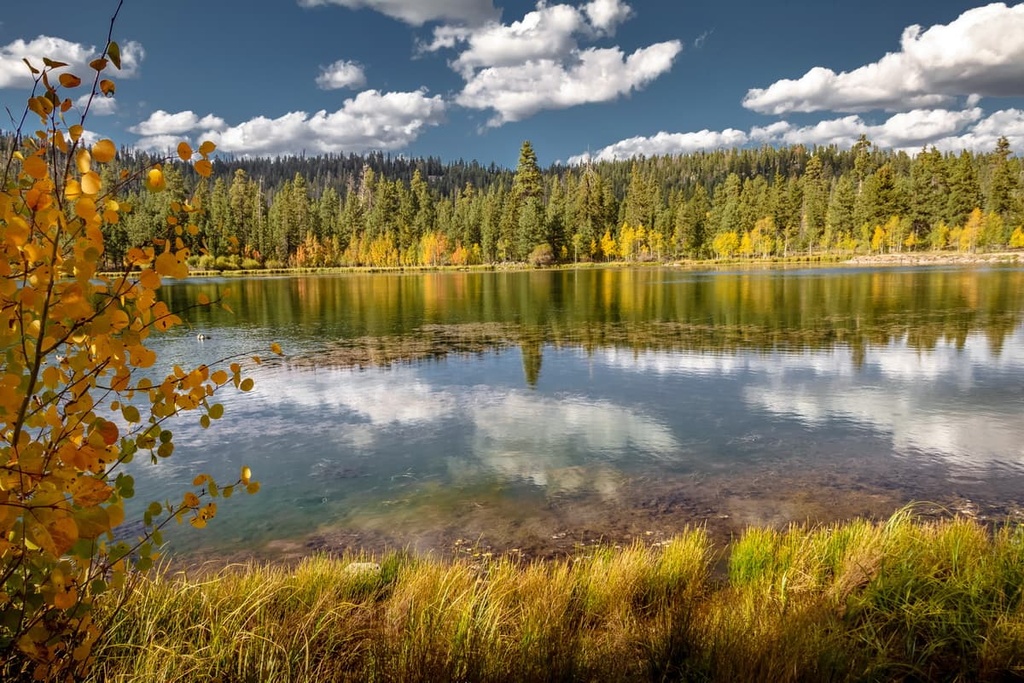 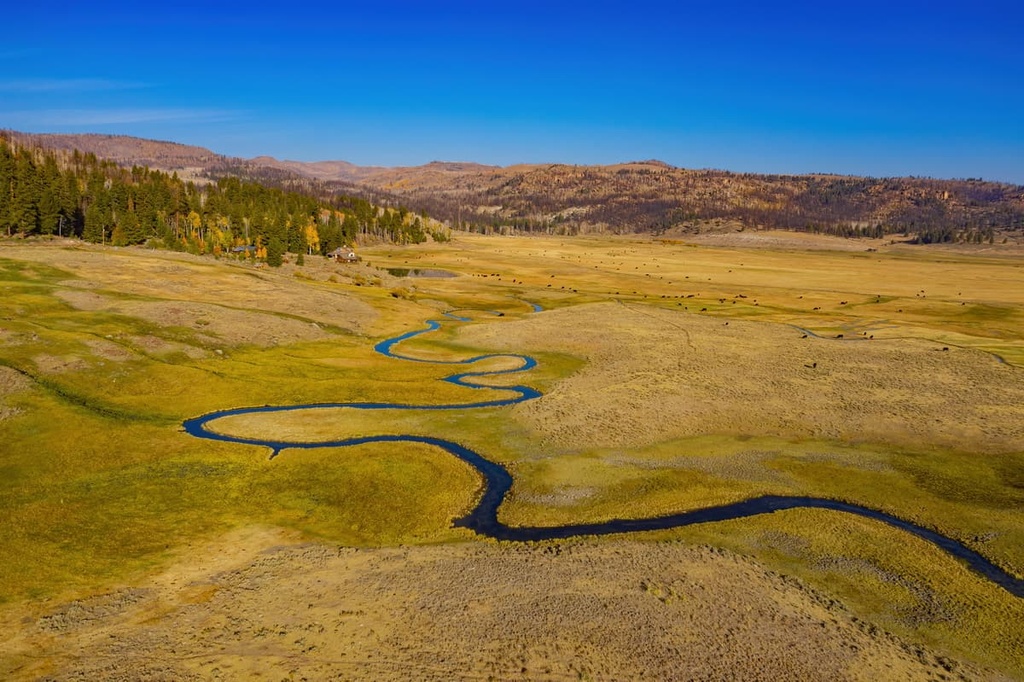 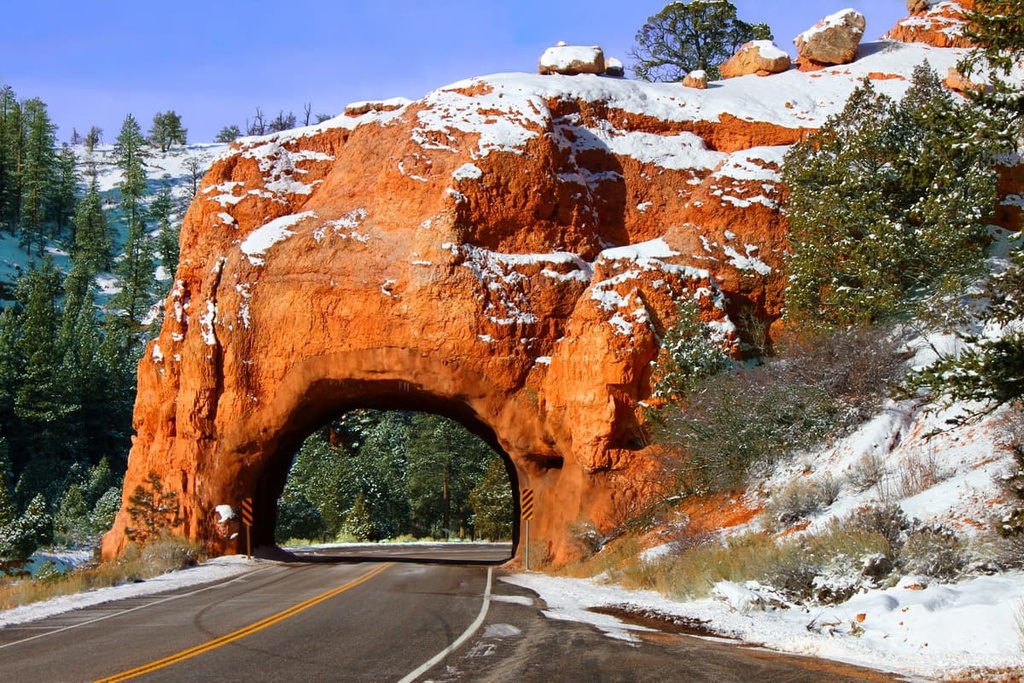 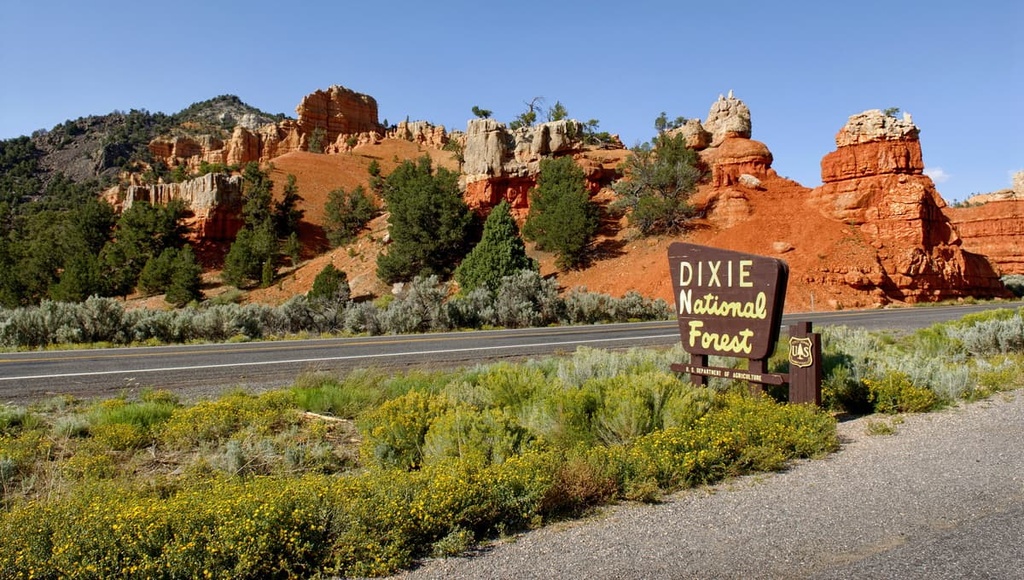 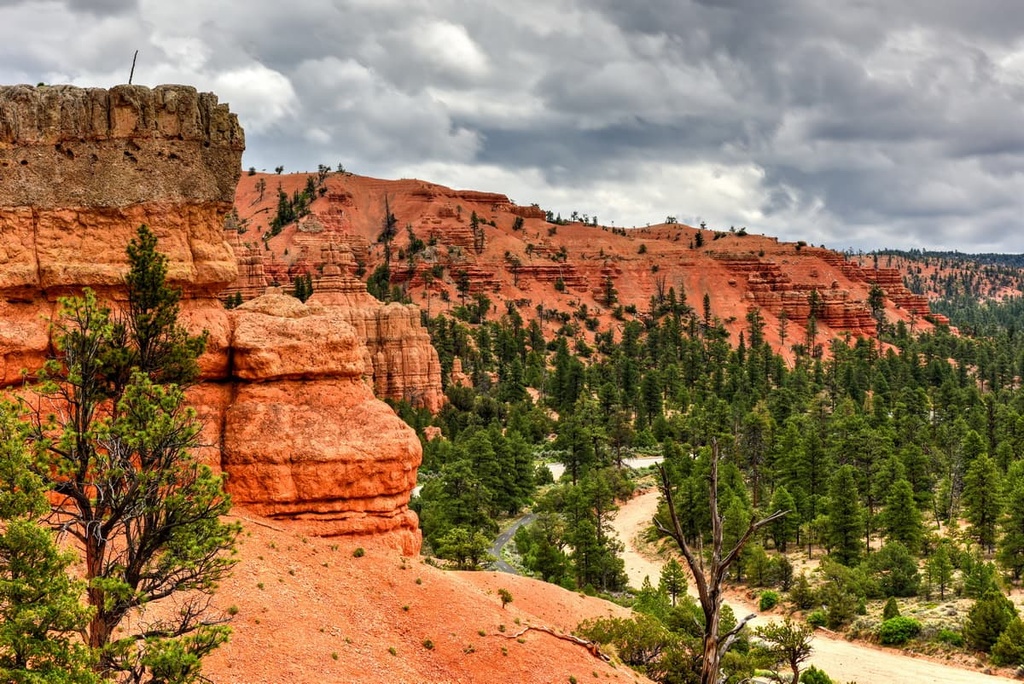