The Ossipee Mountains are a small, relatively isolated range in the US state of New Hampshire that serves as an important habitat for local flora and fauna. Within the range, there are 27 named mountains, the highest and most prominent of which is Mount Shaw (2,989ft/911m). 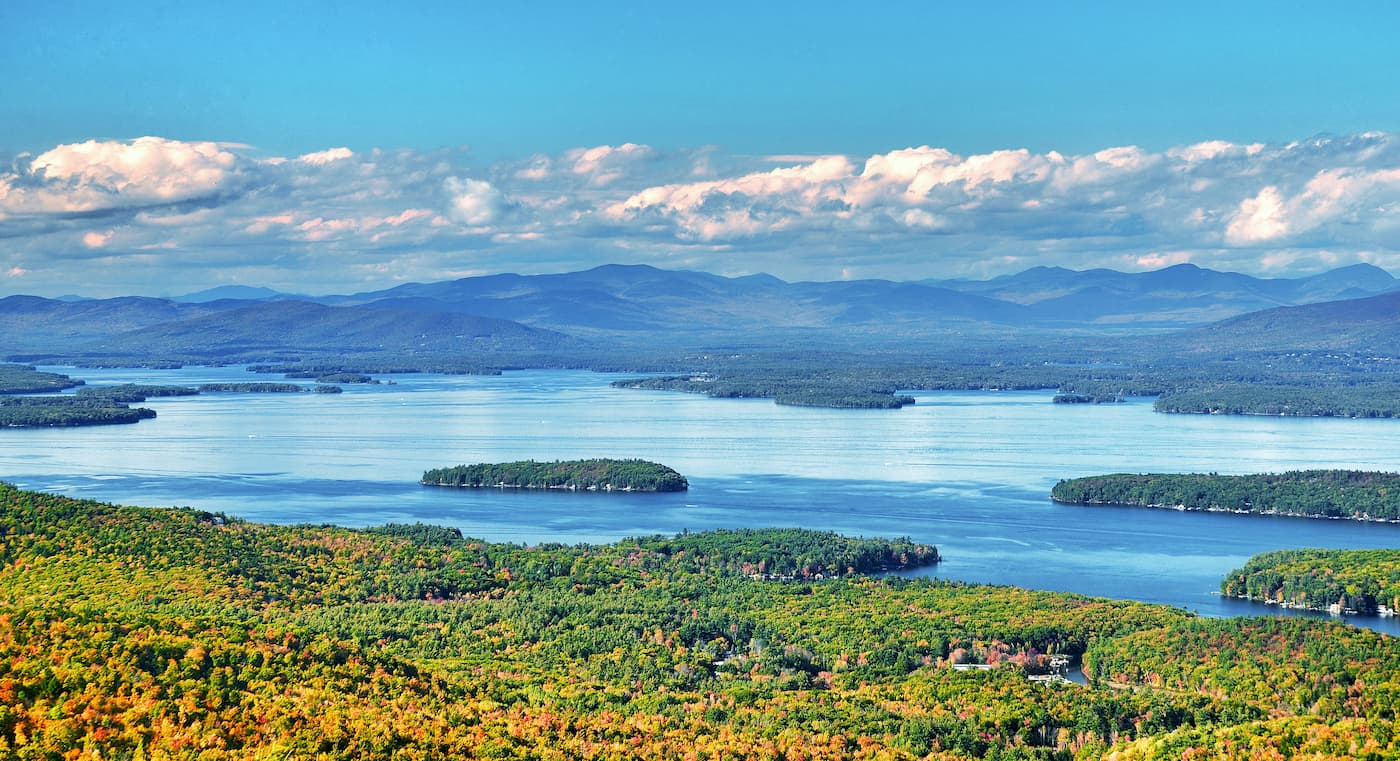 Interestingly, the Ossipee Mountains are all situated in a very small area that's just northeast of Lake Winnipesaukee and west of Ossipee Lake. The entire range is only about 10 miles (16km) wide and 8 miles (12.9km) long.

Due to their location in central New Hampshire, the Ossipee Mountains are surrounded by other smaller ranges. To the southwest of the range is the Belknap Mountains while the hills of the New England Upland are located to the south and southeast.

Unlike the White Mountains to the north, which are almost entirely included within the boundaries of White Mountain National Forest, the Ossipee Mountains contain relatively little public land and the vast majority of the region is privately owned.

The geology of the Ossipee Mountains is particularly interesting as the range is actually located on the remnants of an ancient volcanic ring dike.

These ring dikes form as the magma chamber - usually in a large volcano - collapses, causing the rock located directly above the magma to sink. When this happens, the magma then gets pushed upward where it cools over time into rock.

Some geologists believe that, soon after sinking, this ring dike would've looked much like a collapsed caldera, much like what can be seen at Tanzania's Ngorongoro crater. However, over the last hundred million years or so, erosion and regional uplift have crafted the range into what we see today.

Interestingly the bedrock found in the range started to form during the Jurassic as magma rose to the surface of the Earth's crust during the breakup of the supercontinent of Pangea.

As this magma bubbled to the surface, it started to cool, forming basalts, rhyolite, granites, and large areas of quartz intrusions. However, the granite in the region generally formed about 3 to 5 miles (4.8 to 8km) below the overlying basalts, so any exposed granite is usually the result of well-eroded basalts.

Although the range is fairly small, it does contain a few relatively sizable peaks above 2,500 feet (762m), including Mount Shaw, Black Snout, Faraway Mountain, and Mount Roberts. Other notable peaks include Bayle Mountain and Turtleback Mountain.

Thanks to their location within central New Hampshire, the Ossipee Mountains are wholly contained in the New England/Acadian forests ecoregion.

This ecoregion extends throughout New England, including the states of Vermont, Massachusetts, New Hampshire, and Maine. It also crosses the border into the eastern part of the province of Québec (except the Gaspésie), as well as the provinces of Nova Scotia and New Brunswick.

Within the ecoregion, there is a mix of both broadleaf and coniferous forests. While the White Mountains to the north are predominately coniferous, the lower-lying Ossipee Mountains are home to a great mix of hardwoods and conifers.

Moreover, the region is home to a relatively rare type of temperate forest - the pitch pine-scrub oak woodlands, or “pine barrens.” In fact, there is a tract of land, around 2,700 acres (1,092ha) large, located in the northeastern part of the range that is home to the Ossipee Pine Barrens.

In this ecosystem, the flora and fauna are highly dependent on wildlife, so there are often land closures during the late summer and early autumn for prescribed burns. The sandy soil found in the region is particularly important for the rejuvenation of the aquifers that supply a clean water source for the state.

Interestingly, the Ossipee Pine Barrens formed as a result of 2 large proglacial lakes, Ossipee and Silver Lake, that were created as the region's glaciers melted during the last major glaciation. When these two lakes emptied, the sands, gravels, and other fine sediments left in their lake set the stage for the formation of the Pine Barrens over the course of the millenia that followed.

The area that is now known as New Hampshire has been inhabited by humans for thousands of years and the region around the Ossipee Mountains is no exception. Although many groups lived in and traveled through the range over the millenia, the tribes of the Wabanaki Confederacy, as well as the Pequawket, were among the most dominant before the arrival of European colonizers.

Unlike some of the more mountainous regions to the north, the Ossipee Mountains' relative proximity to the coast meant it saw European settlement in the early 1700s. Indeed, Captain John Lovewell, an American militia captain known for his brutality against Indigenous peoples, built a fort in the region during the early part of the 18th century.

Moreover, his fort was built on the foundations of an older structure that was used by the English and the local native peoples in fights against other Indigenous groups as early as the mid-1600s.

The town of Ossipee fairly quickly became one of the most important cultural and commercial areas in the area, despite its small size. It was, and continues to be, home to a number of manufacturing-based companies, which help drive the region's economy.

Small but mighty, the Ossipee Mountains are home to a handful of trails that make for good outdoor adventures. Keep in mind, however, that much of the range is contained within privately owned land, so be sure to stick to marked trails and land easements, taking particular care to avoid private property whenever possible.

Although it's not the tallest peak in the range, humble Bayle Mountain does offer some truly excellent views. The trailhead is located on Marble road near Connor Pond, which is relatively easy to access from West Ossipee. From the trailhead, it's just a short, 20 minute hike to the summit, where you can get views of the White Mountains and even Mount Washington on a sunny day.

This 7 mile hike up to the summit of Mount Shaw is a moderately strenuous trek for a day of adventure. Along the way, it also provides an option for a side trip to tag both Black Snout and Big Ball for people looking to get in a few extra miles on the day.

Planning a trip to the Ossipee Mountains? Here are some of the best places to stay along the way.

The town of Ossipee is located on the eastern edge of the range. It is home to about 4,300 residents, and is actually a collection of villages rather than a single large town. Although Ossipee is only accessible by road, it is just 2 hours from Boston, which has a major international airport and connections to cities around the world.

North Conway is a popular outdoor recreation destination located about 45 minutes north of the Ossipee Mountains within the heart of the White Mountains. The town has approximately 2,300 year-round residents, though it is a major hiking, skiing, and climbing location that attracts visitors from around the world.

Situated about 1 hour south of the Ossipee Mountains, the city of Concord is the capital of the state of New Hampshire. It has approximately 43,000 residents, which makes it less than half the size of the state's largest city of Manchester, about 20 minutes to the south.

Concord is located along I-89 and I-93, which provide good road connections to Boston's international airport just over 1 hour away. 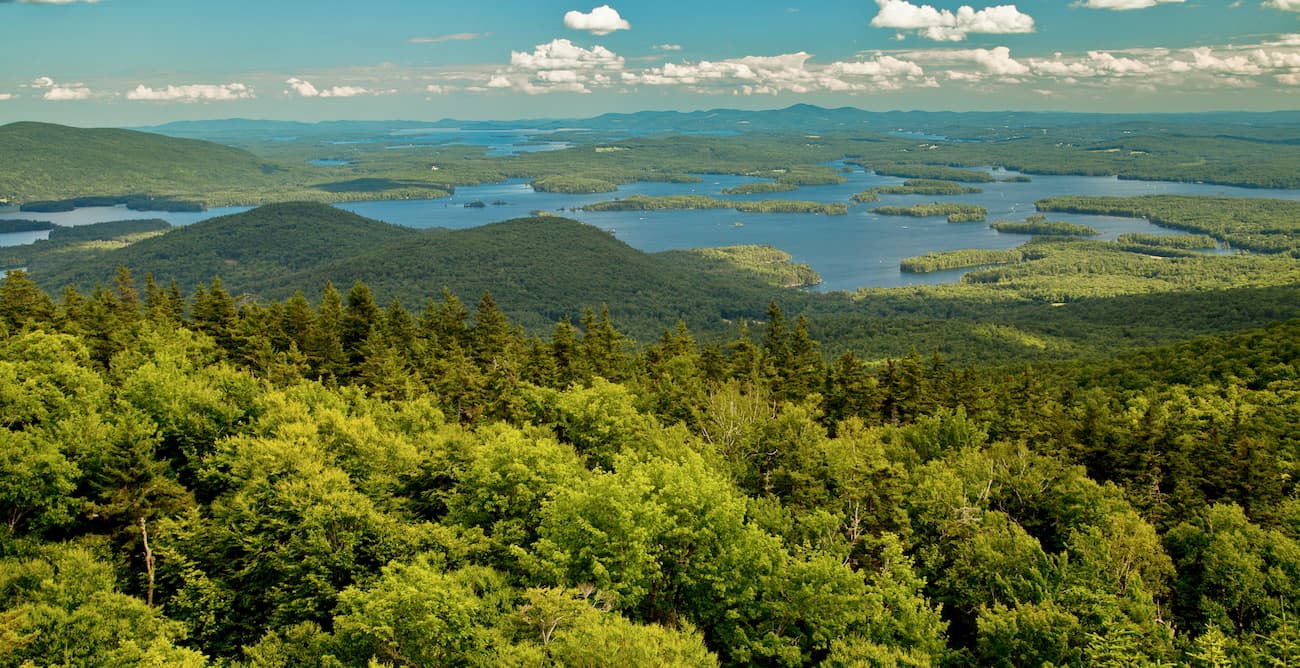 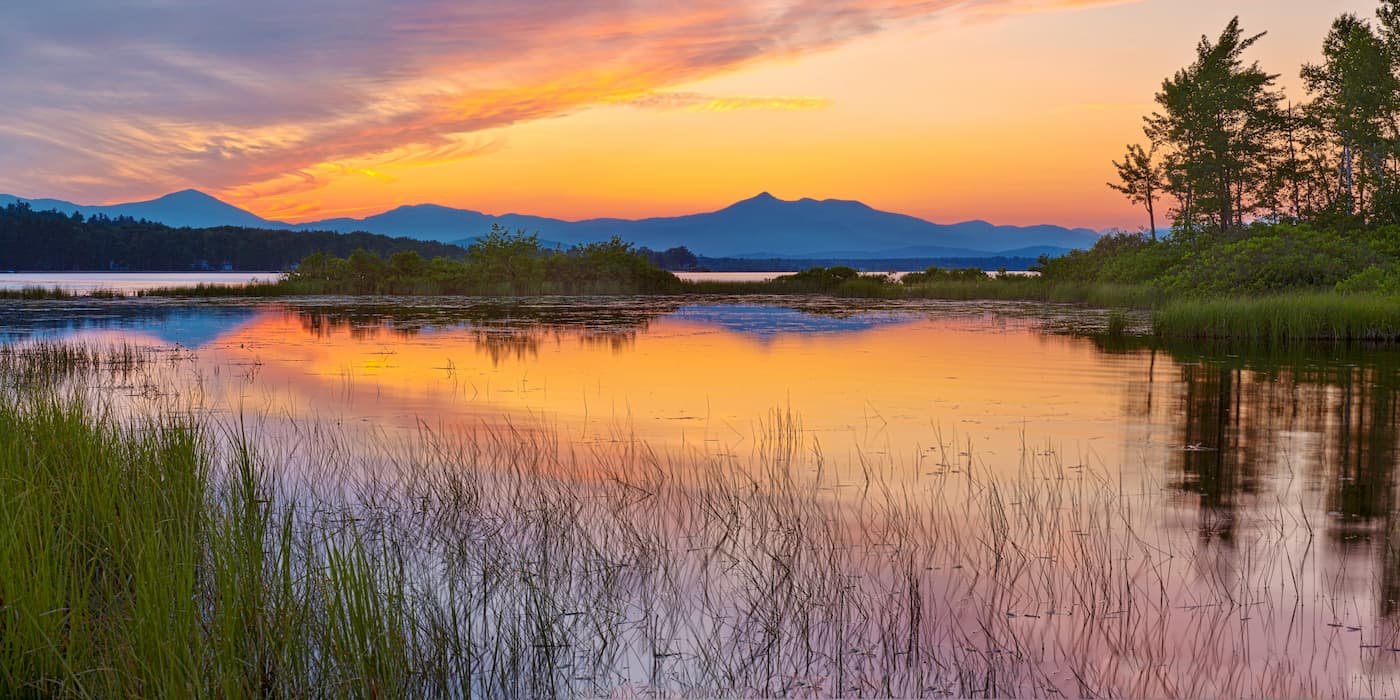 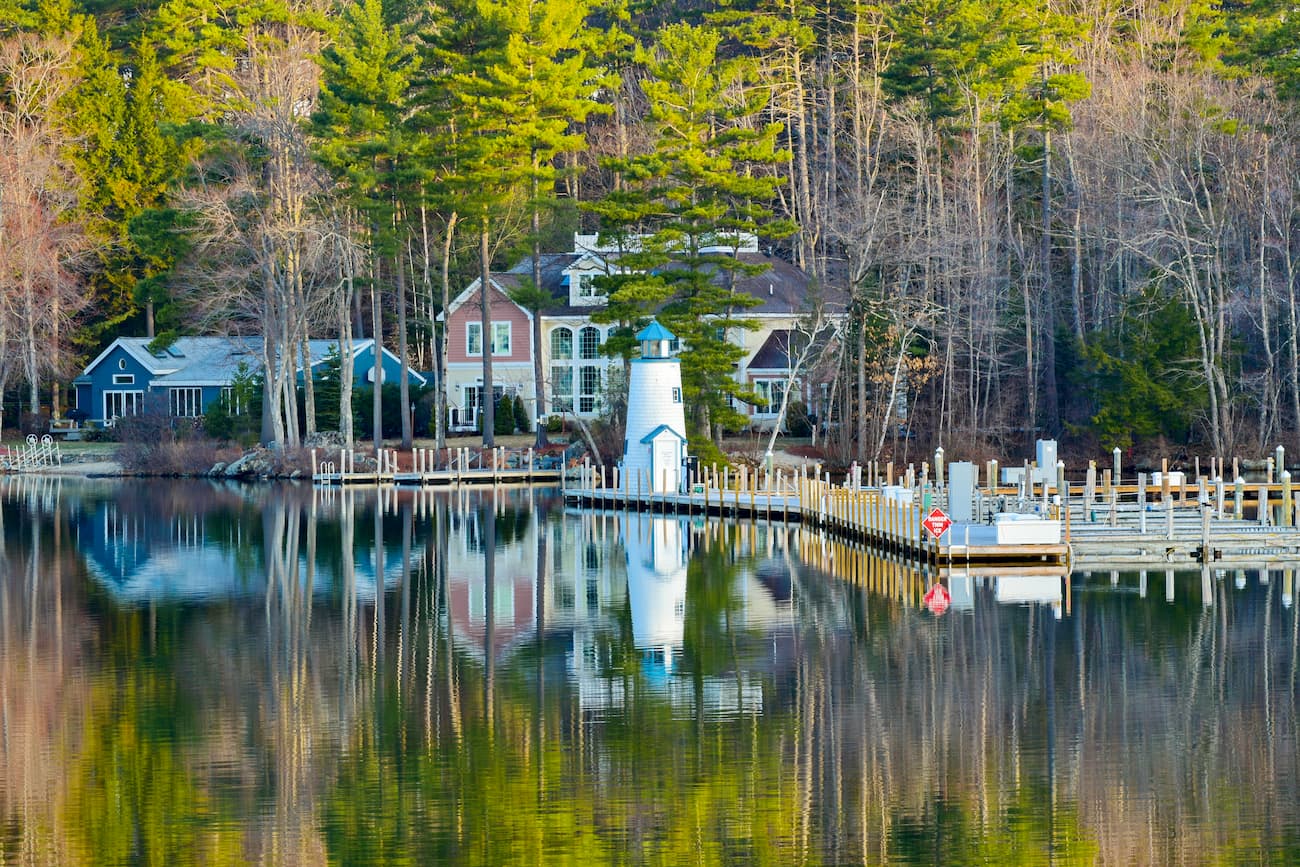 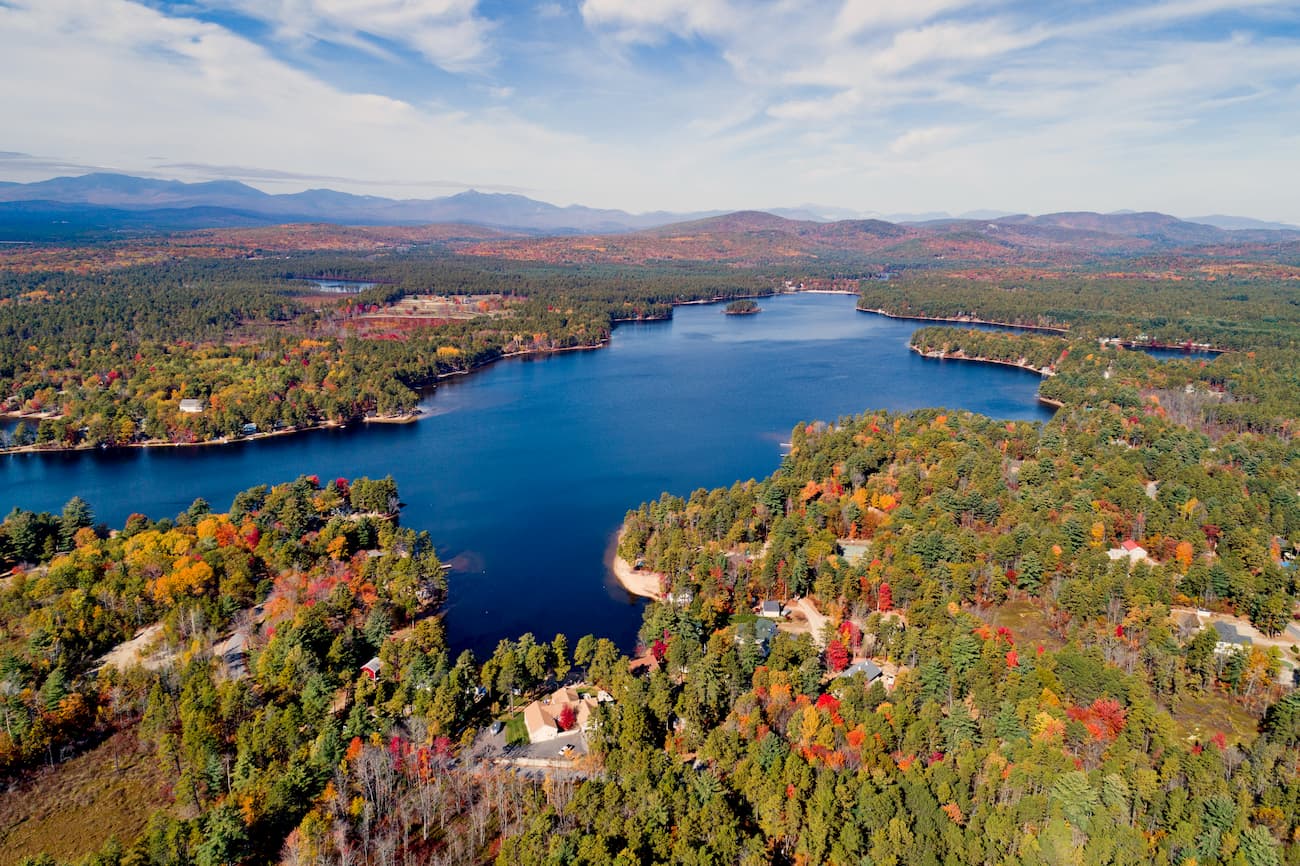 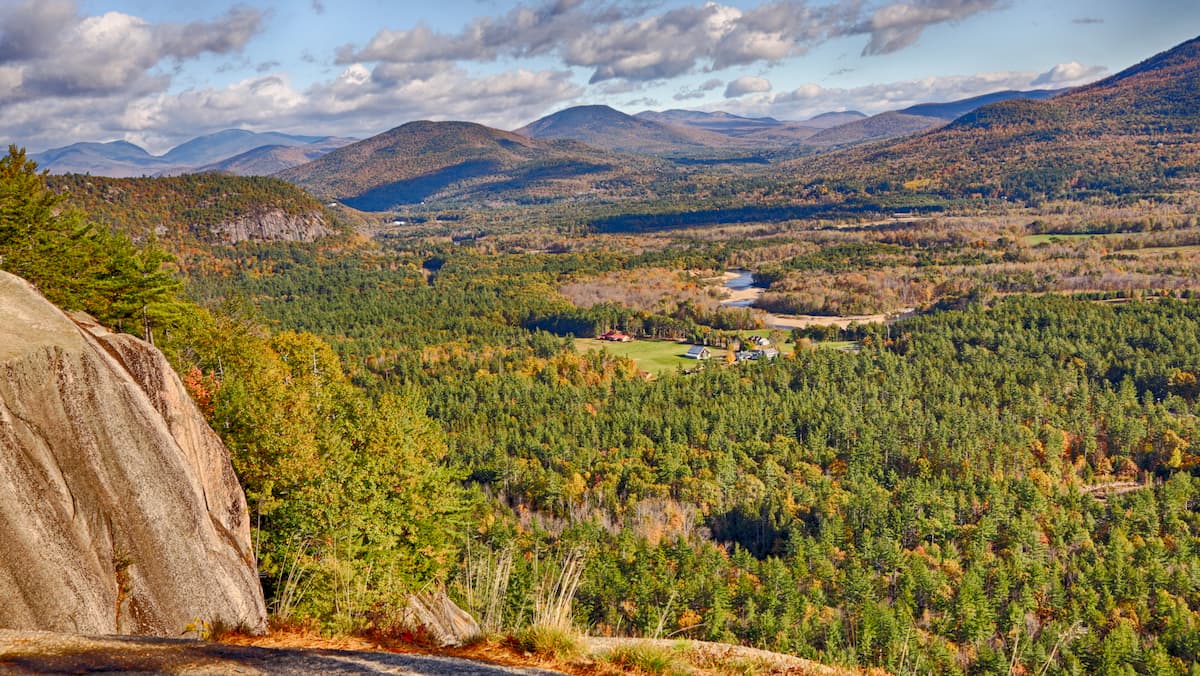