Home to rugged mountainscapes and dense forests, the Iron Mountains are a large subrange of the Blue Ridge Mountains that’s located in the US states of Virginia and Tennessee. The range contains 125 named mountains, the highest and most prominent of which is Grave Mountain (5,052 ft/1,540 m). 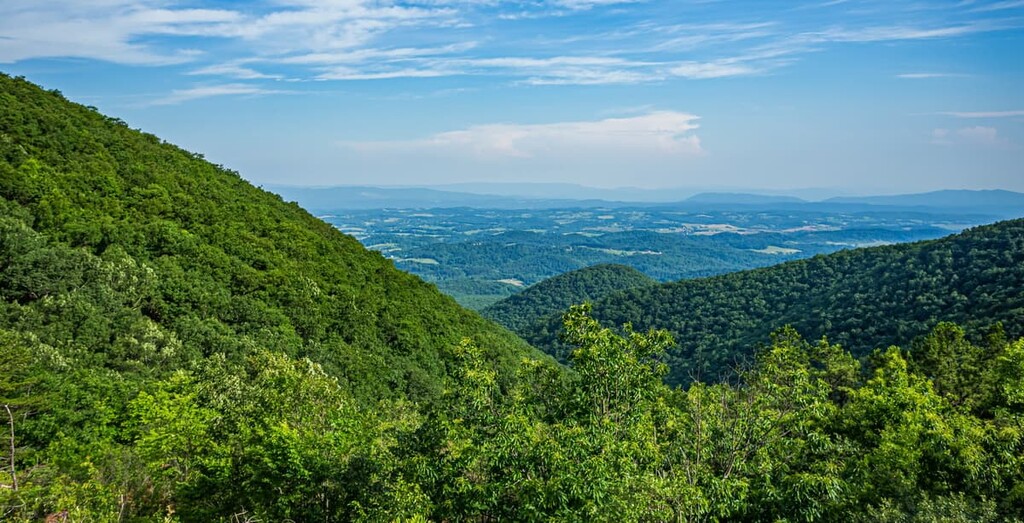 The Iron Mountains are a chain of peaks that extends from the community of Wytheville, Virginia in the north all the way to the outskirts of Johnson City, Tennessee to the south.

Located around the border area of Virginia, Tennessee, and North Carolina in the southeastern United States, the Iron Mountains cover parts of Grayson, Wythe, Carroll, Smyth, and Washington counties in Virginia as well as parts of Johnson, Sullivan, and Carter counties in Tennessee.

Geologically, the Iron Mountains are part of the Blue Ridge Mountains subrange of the Appalachian Mountains.

The Appalachians are one of the major mountain systems in North America as they stretch from the US state of Alabama to the south all the way to the province of Newfoundland and Labrador in Canada to the north. Meanwhile, the Blue Ridge Mountains are one of the Appalachian Mountains’ subranges and they comprise the bulk of the central Appalachians from northern Georgia in the south to southern Pennsylvania in the north.

The rocks within the Iron Mountains vary widely. Some of the most prominent rock formations in the range include the Elkbrook Formation, which consists of dolomites and limestones dating back to the Cambrian as well as the Knobs Formation, which includes Ordovician sandstones and conglomerates. Overall, the bulk of the rock in the region is sedimentary in origin.

Furthermore, as the range’s name suggests, the Iron Mountains and the surrounding region are fairly mineral rich. Iron was and is mined in the region, as is manganese. However, limestone, sand, and gravel quarrying is arguably more common in the range.

The ecology of the Iron Mountains is typical of that of much of the Blue Ridge Mountains and Jefferson National Forest.

Due to the relatively low elevations of many of the mountains in the range, the Iron Mountains are predominately home to mixed oak forests. However, at the highest elevations of the range above about 4,400 ft (1,350 m), some source-fir forests and grassy balds can be found.

Some of these balds, which can be found on a few of the highest peaks of the range, are part of a plant community known as the Southern Appalachian Shrub and Grass Balds. These balds are home to a mix of shrubs, such as mountain laurel, Catawba rhododendron, black huckleberry, and southern mountain cranberry.

Furthermore, the Iron Mountains and the rest of the Blue Ridge Mountains are known for being quite biodiverse. There are a number of sizable mammals that inhabit the range, such as coyotes, deer, beavers, black bears, opossums, and bobcats. Additionally, some of the streams in the Iron Mountains, including those near Shaw Gap such as Mill and Rush creeks, are home to wild trout.

The land in and around the Iron Mountains has been home to humans for thousands of years. In fact, the range is part of the traditional territory of the Eastern Band of Cherokee Indians, the Moneton, and the Tutelo, among others. The Eastern Band of Cherokee Indians maintains the Qualla Boundary, a small fraction of their ancestral homelands, in what is now western North Carolina.

People of European descent first arrived in the region around the Iron Mountains sometime during the seventeenth or eighteenth centuries. While it is possible that Spanish conquistador Hernando de Soto’s sixteenth century expedition around what is now the southeastern US crossed into the Iron Mountains, there is a lack of definitive evidence on the subject.

However, during the 1670s, it’s believed that the Needham and Arthur expedition passed through the area of what is now Mountain City, Tennessee in the southern part of the range. Later, Daniel Boone is also known to have crossed through the region in the 1760s when venturing to what is now Kentucky.

The southern part of the Iron Mountains saw settlement by Americans of European descent during the eighteenth century. This brought with it conflict with tribal nations, who were being pushed off their homelands by the settlers. Eventually, the US government passed the 1830 Indian Removal Act, which led to the forced removal of countless Idigenous peoples from their traditional territory.

During the nineteenth century, the northern part of the range near Wytheville played an important role during the Civil War. It was attached multiple times by Union troops hoping to defeat Confederate strongholds in the region.

In the early part of the twentieth century, much of the land in the Iron Mountains was placed under the jurisdiction of the US National Forest Service. The land was included in the newly formed Jefferson National Forest in an attempt to help some of the region’s forests regrow after many years of over logging and increased resource extraction.

Although the Iron Mountains are one of the smaller Blue Ridge Mountains subranges, there are plenty of spectacular hiking opportunities to check out in the range. These are some of the best hikes to consider during your trip:

The Appalachian Trail is one of the United States’ premier long distance hiking trails. Luckily for visitors to the Iron Mountains, the trail passes right through the range.

In particular, the Damascus to Marion leg of the Appalachian Trail is a popular option for section hikers and day hikers, alike. The total mileage of this leg is about 68.5 miles (110.2 km), so most people choose to do this hike over the course of about 5 to 10 days.

Like all parts of the Appalachian Trail, this hike is well-marked and easy to follow. But, this section of the trail does travel through some fairly remote and rugged terrain, so be sure to pack accordingly for your adventure.

One of the most popular regional long-distance trails, the Virginia Creeper is a 34.3 mile (55.2 km) long trek that extends from Abingdon, Virginia all the way to the Virginia–North Carolina border.

The trail is actually a multi-use trail, so you’ll likely share the journey with mountain bikers and equestrians. However, it offers a chance to see some of the most stunning terrain in southwestern virginia without too much elevation gain.

This trail also intersects with the Appalachian Trail, so it’s possible to link up a number of hikes in this region to create your own backcountry adventure.

Perfect for anyone that loves some quality ridgeline hiking, the Iron Mountain Trail is a challenging regional through hike that traverses much of southwestern Virginia. The most popular section of the trail is a 22.4 mile (36 km) ridgewalk that ventures from the town of Damascus to Iron Mountain Gap.

Looking for a place to stay near the Iron Mountains? Here are some of the best cities and towns in the region to check out:

Located just to the south of the Iron Mountains, Johnson City is a metropolitan area that’s home to some 66,000 people in the northeastern part of Tennessee. The city is the ninth-largest in Tennessee, and it is consistently ranked as one of the best small cities in the eastern US.

Johnson City has an economy that’s dominated by manufacturing, education, and medical technology. The city also serves as a hub for much of northeastern Tennessee, so it has a number of large shopping areas. Johnson City also has a number of popular museums and city parks for visitors to check out.

Holding the distinct title of the highest incorporated city in the state of Tennessee, Mountain City is a community of some 2,400 people located in the extreme northeast of the state. Mountain City is located at an elevation of 2,418 ft (737 m) and it offers great access to the region’s trails.

Mountain City is a bastion for traditional Appalachian culture in the region. In fact, the town once held a festival called the Mountain City Fiddlers Convention in 1925, which was a landmark event that allowed for great advancements in both Appalachian traditional music and modern country music.

Situated just at the northern tip of the Iron Mountains, the town of Wytheville is a community of some 8,200 people that’s known for its tumultuous history.

Wytheville was an important stronghold during the Civil War and it was attacked multiple times during the conflict. Unfortunately, Wytheville also holds the devastating destination of being the site of the last documented lynching in the state of Virginia, which saw the murder of Raymond Bird in 1926.

These days, however, the town is better known for its many historic sites and fun festivals. Arguably the most notable of these festivals is the Chautauqua Festival, which is an annual eight-day family music and arts gathering that’s open to the public free of charge.

Known as Trail Town USA by some of the locals, Damascus is a small town of about 800 people situated in the heart of the Iron Mountains. Damascus gets its nickname from the fact that it is located at the intersection of a number of important trails including the Appalachian Trail, the Virginia Creeper Trail, and the Iron Mountain Trail.

The town holds an annual Trail Days festival each year, which brings as many as 20,000 tourists to the region. This festival is a celebration of all the outdoor adventure opportunities in the region and it offers a number of activities, such as group hikes, educational lectures, gear repair classes, and other similar events. 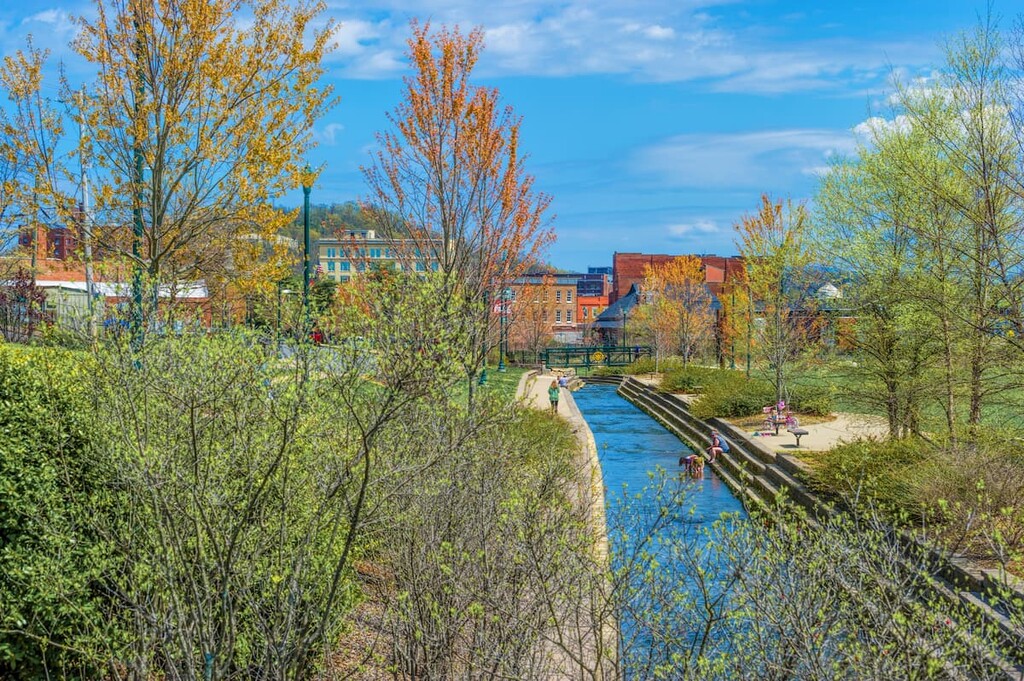 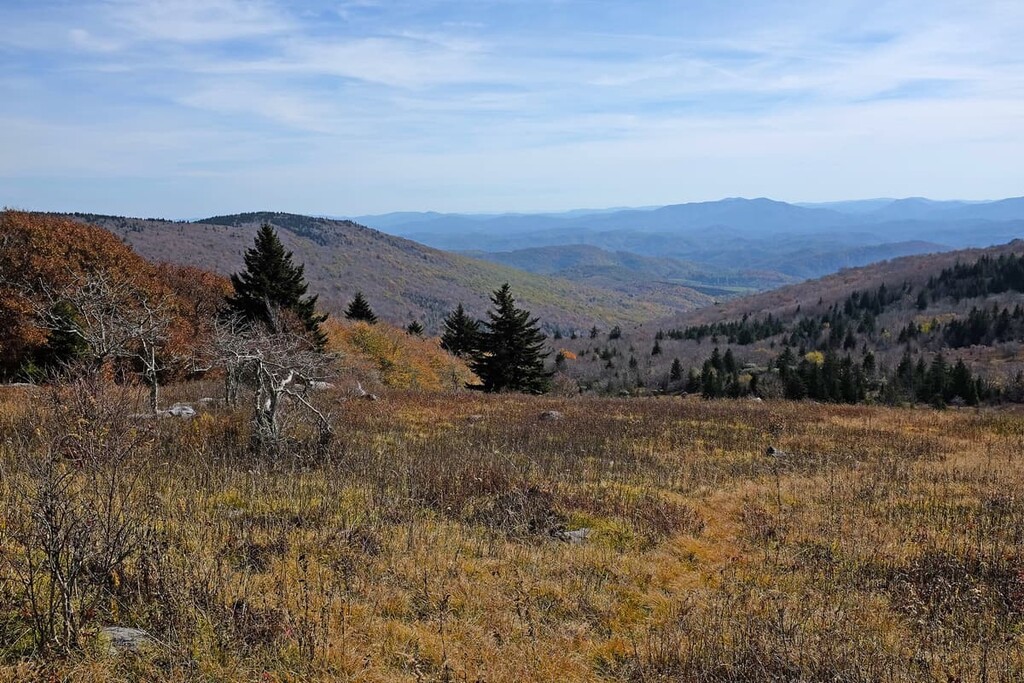 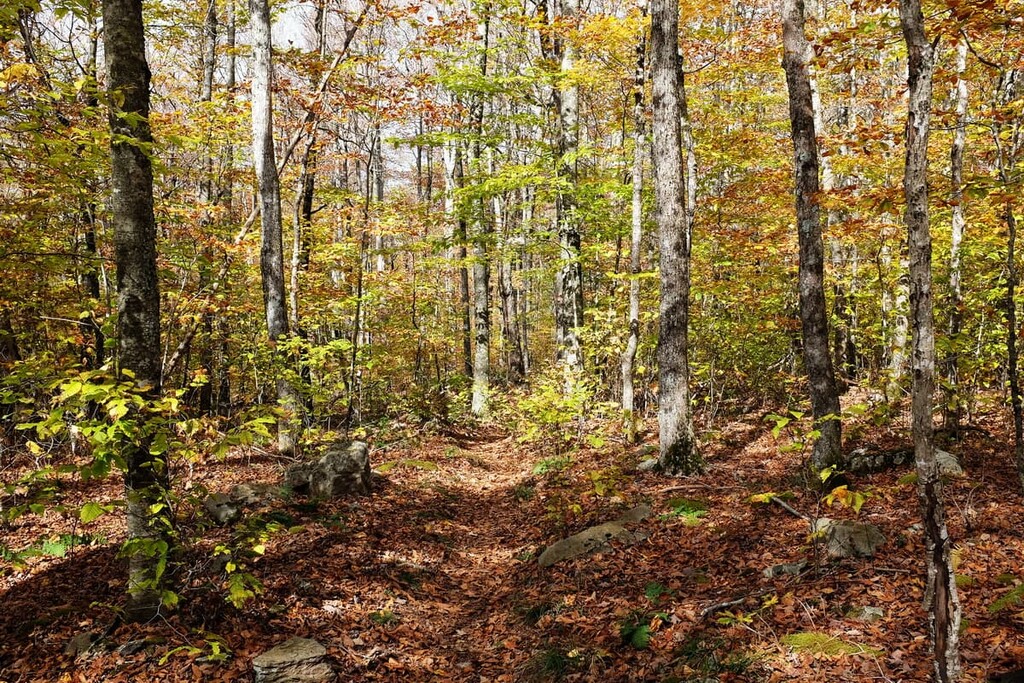 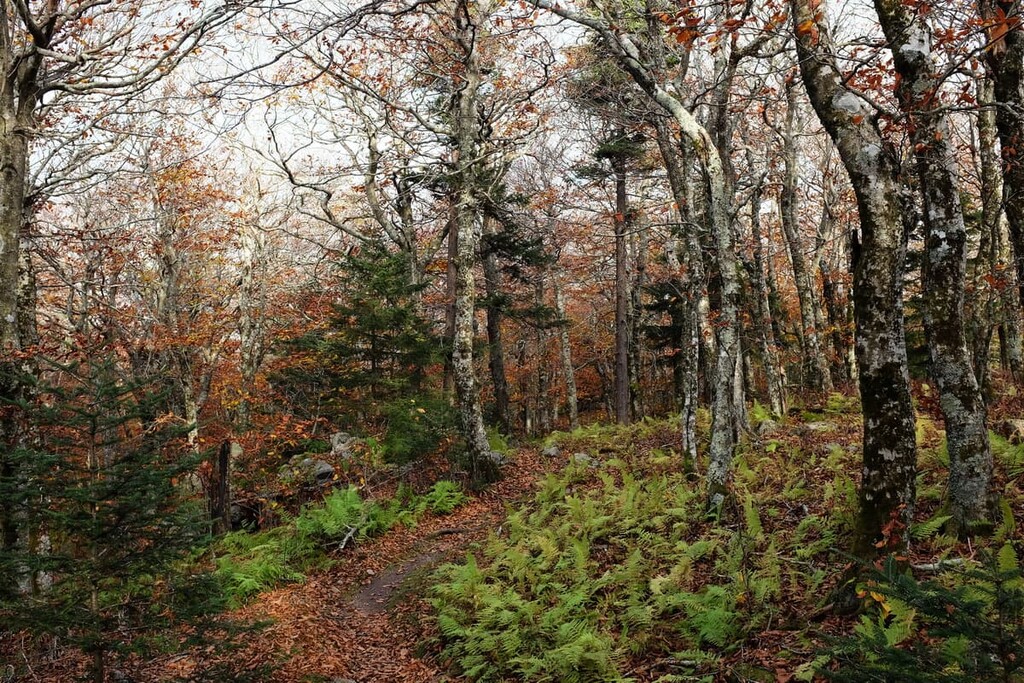 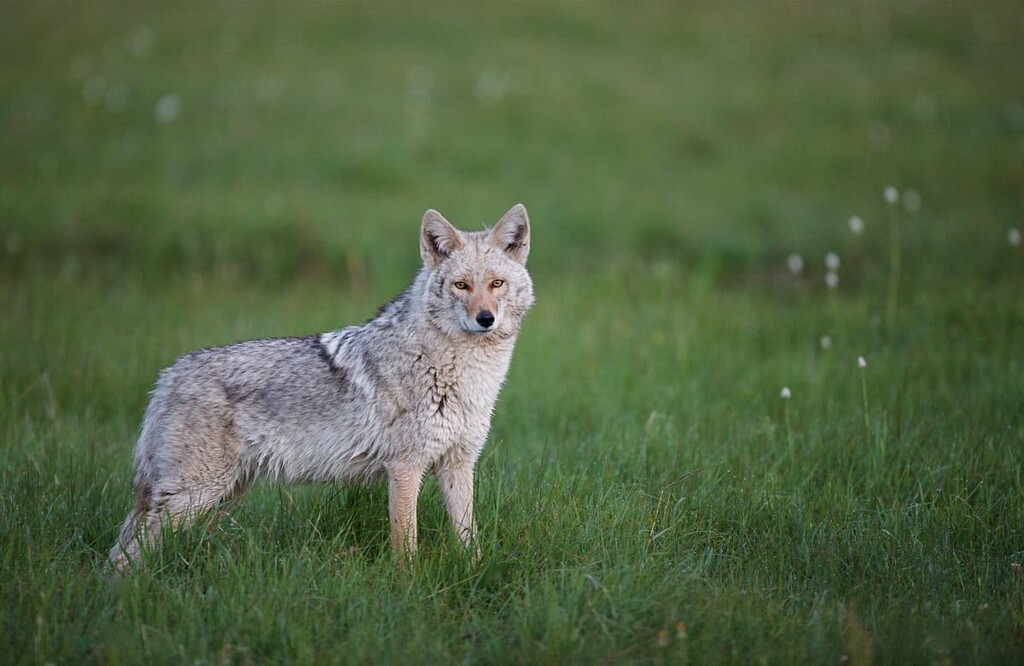 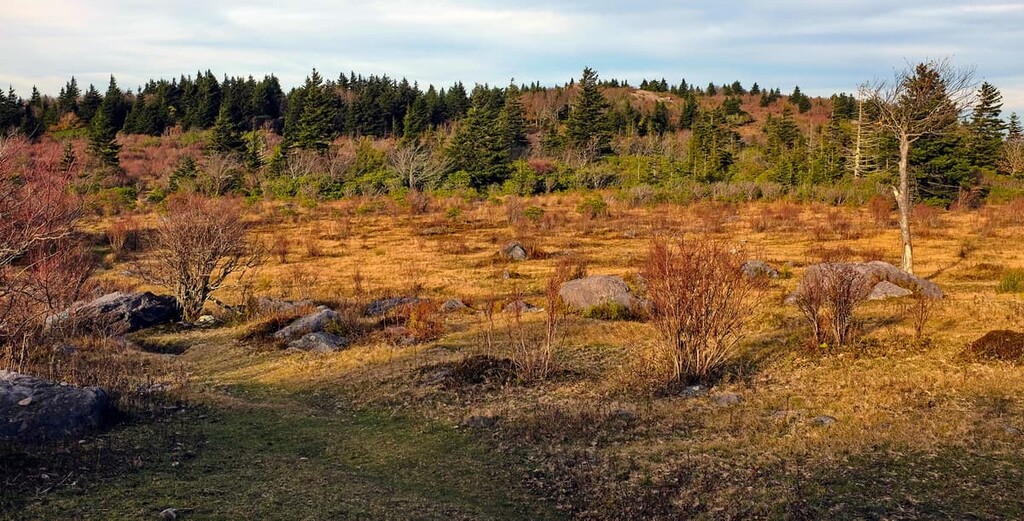