The Boundary Ranges are the northernmost subrange of the Canadian Coast Mountains, which run along the western side of British Columbia, Canada. Starting from the Nass River near the Alaska panhandle, the Boundary Ranges stretch northward into Yukon and contain hundreds of mountains, the highest and most prominent of which is Mount Ratz (3,090 m/10,138 ft). 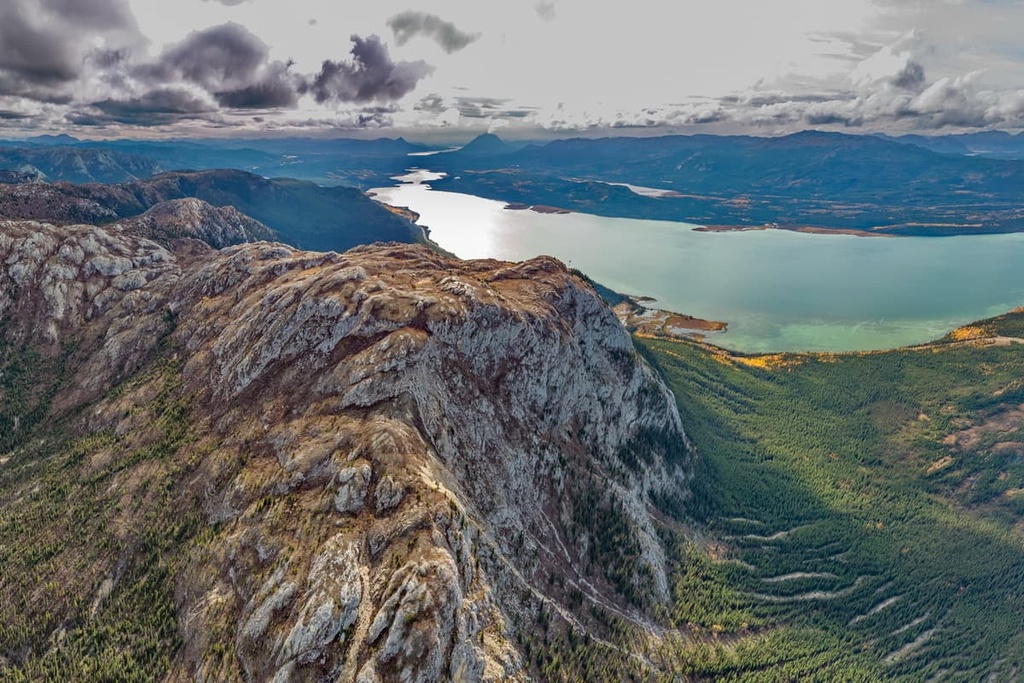 Located along the western side of northern British Columbia, Canada, the Boundary Ranges are a collection of peaks that extend from the Nass River in the south to the city of Whitehorse in Yukon.

As the Boundary Ranges are located in a highly mountainous part of northwestern Canada and southeastern Alaska, they are surrounded by other mountain ranges. In particular, the St. Elias Mountains are situated to the west of the Boundary Ranges, while the British Columbia Interior system is located to the east.

Like most of the Canadian Coast Mountains, the Boundary Ranges are largely composed of Paleozoic and Mesozoic aged sedimentary and volcanic rocks with a core of intrusive granitic rocks. The granitic core is the remnant of the Coast Range volcanic arc which disrupted the west coast during the Late Cretaceous.

In general, there is extensive exposed granite throughout the Boundary Ranges in addition to greywackes and volcanic rocks that dominate the eastern contact of the granitic batholith.

There are noticeable differences between the topography of the sedimentary and granitic peaks in the region.

These sedimentary peaks, which lie along the eastern edge of the ranges, tend to be more irregular and their peaks are more serrate and jagged. The major topographical differences that we see between the granite and sedimentary mountains in the range are due to their relative hardness compared to the erosive force of the Pleistocene glaciers.

Cirques, hanging valleys, and over-steepened slopes are some of the many glacial features that dominate the scenic landscape of the Boundary Ranges. During the Pleistocene, the Boundary Ranges were heavily glaciated, and the ice sheet covered peaks as high as 2,000 m (6,500 ft) above sea level. The immense weight of the ice sheet also depressed the coastline by as much as 150 m (500 ft).

During this time, the tallest peaks in the range were nunataks that projected above the cordilleran ice sheet. These mountains were subjected to intense alpine glaciation that left many cirques and horned peaks in the range. Meanwhile, the peaks in the range that are below 2,000 m (6,500 ft) elevation are more rounded because they were heavily eroded by the ice sheet.

In general, the western side of the Boundary Ranges is host to the ancient temperate rainforests that are common along the west coast. Here, the relatively warm ocean air penetrates the western valleys, creating dense forests of western cedar, western hemlock, and Douglas fir in the process.

At the northern end of the range, the rainforests transition to forests filled with spruce and fir. Subalpine fir is more cold-resilient than many of the other tree species that live in the region, so it tends to dominate the chilly treeline of the ranges. At the same time, Engelmann spruce dominates the subalpine canopy in the ranges as the forests transition to the sub-boreal forests of subalpine fir, Engelmann–white spruce hybrids, and lodgepole pine.

Toward the south end of the Boundary Ranges, the landscape transitions from the wet coastal rainforests to a climate that is a little drier. Giant cedars and hemlock still grow on the southeastern slopes of the Boundary Ranges; however, the forests are also filled with stands of Engelmann spruce, subalpine fir, and lodgepole pine.

The dense forests throughout the Boundary Ranges are home to many animals including grizzly and black bears, moose, caribou, bighorn sheep, and mountain goats. Cougars, wolves, foxes, and other predators also roam the Boundary Ranges.

The ice-capped peaks, steep valleys, and dense forests of the Boundary Ranges have made human encroachment so difficult that many of the northern ecosystems in the region remain intact and undisturbed.

The Boundary Ranges are part of the traditional territory for several First Nations. The Dene have inhabited the northern reaches of the ranges for countless generations while the Nisga’a have lived in the southern valleys around the Nass River since time immemorial.

The Tahltan are a people of Athabaskan descent, like the Dene, and they also traditionally live in the central part of the Boundary Ranges. The Tlingit First Nation has also lived along the western slopes and coastal areas associated with the Boundary Ranges for thousands of years.

Most of the range is still covered in ice; however, there are many significant archeological and cultural sites that exist throughout the Boundary Ranges. Archeological sites include burial sites, village sites, fishing traps, and petroglyphs. In particular, a dense concentration of petroglyphs can be seen at Wrangell Petroglyph Beach.

Evidence of human habitation along the western slopes of the Boundary Ranges and the western coast of both British Columbia and southeast Alaska dates back about 14,000 years.

Some of the cultural sites around the Boundary Ranges contain artifacts with connections to northeastern Asian cultures. This evidence has led many researchers to the hypothesis that one of the routes that Indigenous people used to reach what is now called North America was through Alaska via the Bering land bridge.

At the end of the nineteenth century, the Klondike Gold Rush drew thousands of people from the southern parts of Canada and the US to northern British Columbia and Yukon in an attempt to strike it rich. Many of these miners passed through and around the Boundary Range. The most successful offshoot of the Klondike Gold Rush started in 1898 around Atlin Lake, which is located on the eastern side of the Boundary Ranges.

The town of Atlin was created as a result of the Gold Rush, and it also became a popular tourist destination throughout the 1920s. It was only in 1950 that a road was built that extended all the way to Atlin. Previously, the overland route included two lake steamers and a connecting rail line, while the coastal route brought tourists up the Inside Passage and across various passes and lakes.

Most of the economic activity in the region is derived from mining, forestry, and tourism. While the Boundary Ranges are difficult to access, all those that visit say that they can never stay long enough to fully enjoy and appreciate the region.

Best Hikes in the Boundary Ranges

The scenic Boundary Ranges are typically difficult to access; however, they are filled with many incredible sights and opportunities for adventures. The following are some of the major hiking areas and attractions located in and around the Boundary Ranges of British Columbia and Alaska.

Located about 100 km (60 mi) from the Alaska Highway turnoff at Jake’s Corner, is the town of Atlin and the nearby Atlin Lake Provincial Park.

The lake is a stunning destination for canoe trips as it features 11 backcountry campsites that are scattered on the lake’s islands and along the shoreline of the lake. There are also four main hiking trails in the park that are accessible by boat or plane only.

These trails may follow an abandoned railway line, lead to the base of Llewellyn Glacier, or bring you to other viewpoints. Each trail offers something different, be that incredible views of the surrounding mountains, such as Birch Mountain, Mount Cameron, and Mount McCallum, or views of the various glaciers and icefields that surround the lake.

Preserving the history and areas of White and Chilkoot Pass, the Klondike Goldrush National Historic Park contains many scenic and culturally significant hikes. One of the main hikes of the park is the Chilkoot Pass Trail from Alaska into British Columbia.

This trail is 50 km (30 mi) long one way and it has nearly 2 km (1.2 mi) of elevation gain. Although it is a difficult hike, this trail is an incredible experience for those that are able to complete it. This hike has incredible historical significance with respect to the Klondike Gold Rush and it also passes through some of the most stunning landscapes in the region.

Tongass National Forest is the largest national forest in the United States. It covers most of southeastern Alaska along the Canadian border. The forest boasts ample opportunities for wildlife viewing, fishing, and hiking for those willing to make the journey to the region.

Some of the major places to visit in Tongass National Forest are the Mendenhall Glacier Visitor Center, Anan Wildlife Observatory, and the Southeast Alaska Discovery Center. Other places that offer wildlife viewing in the park are the Steep Creek, Pack Creek, and Fish Creek bear and wildlife viewing areas.

The Boundary Ranges are a remote subrange of the Canadian Coast Mountains located along the border of Alaska, Yukon, and British Columbia. The following are some of the communities and cities located near the edges of the range that are well worth checking out if you’re traveling through the region.

Juneau is the capital city of Alaska, the third-most populous city in the state, and the second-largest city in the US by total land area. For a time, the city was called Rockwell and then Harrisburg; however, the city now takes its name from Joe Juneau, a gold prospector who came to the area from Quebec.

The city of Juneau sits along the base of Mount Juneau. Due to the ruggedness and remoteness of the surrounding terrain, Juneau is only accessible via boat or plane. Towering high above the city is the Juneau Icefield, which is the source of about 30 glaciers, including the Mendenhall and Lemon Creek glaciers that are visible from the city.

Some of the best hikes around Juneau take you to glaciers and mountain summits in the region. Popular trails near Juneau include the Ice Cave Trail, West Glacier Trail, Mount Roberts Trail, and Mount Juneau Trail.

The small community of Atlin is located along the eastern shores of Atlin Lake on the eastern side of the Boundary Ranges. The community was created at the turn of the twentieth century to accommodate the miners that flocked to the region during the Klondike Gold Rush.

While the community is small, with under 500 residents, there are many historical places to visit in the region, to say nothing of the incredible wilderness that surrounds the town. The town also has a museum and an old theater that was built in 1917, both of which are worth visiting.

Across the lake from the town is Atlin Lake Provincial Park, which is an incredible destination for boaters. There are several hikes in the park that lead from the shore to some beautiful lookouts and lakes. Furthermore, there are 11 backcountry camping areas located along the shore of Atlin Lake and on its islands that make for great outdoor adventure locations.

Located across the Stikine River from the northwest corner of Mount Edziza Provincial Park, the community of Telegraph Creek is a small town situated along the eastern slopes of the Boundary Ranges. The region has been inhabited by the Tahltan for thousands of years; however, the town was created during the Stikine and Cassiar gold rushes in the 1860s and 1870s.

Access to Telegraph Creek is by river, air, or a 112 km (67 mi) gravel road with steep gradients, narrow passages along canyon walls without guardrails, and sharp-angled switchbacks. The scenery around the community is incredible and the region is steeped in history. 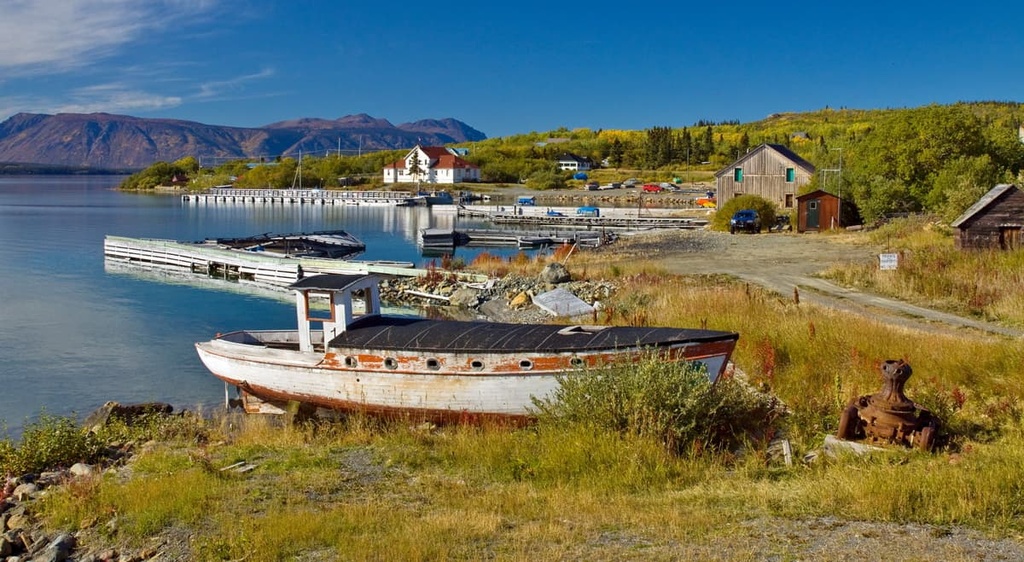 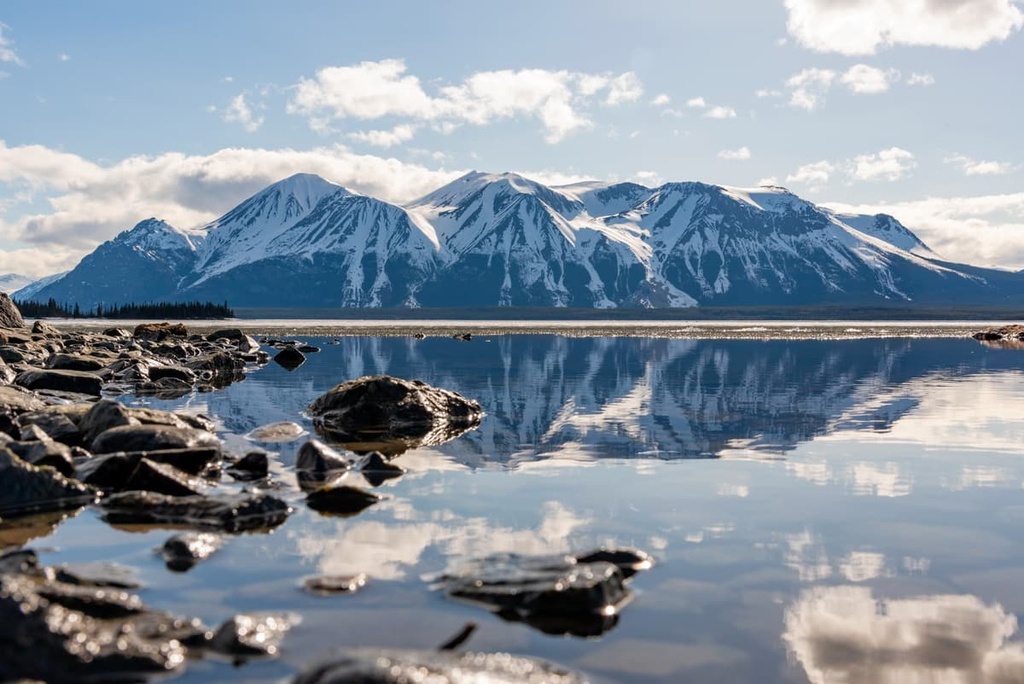 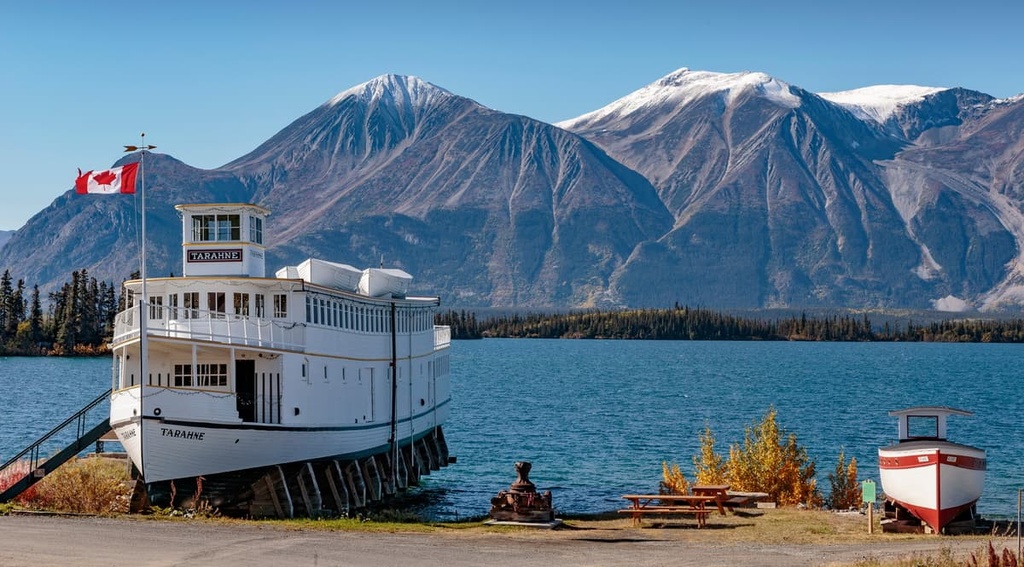 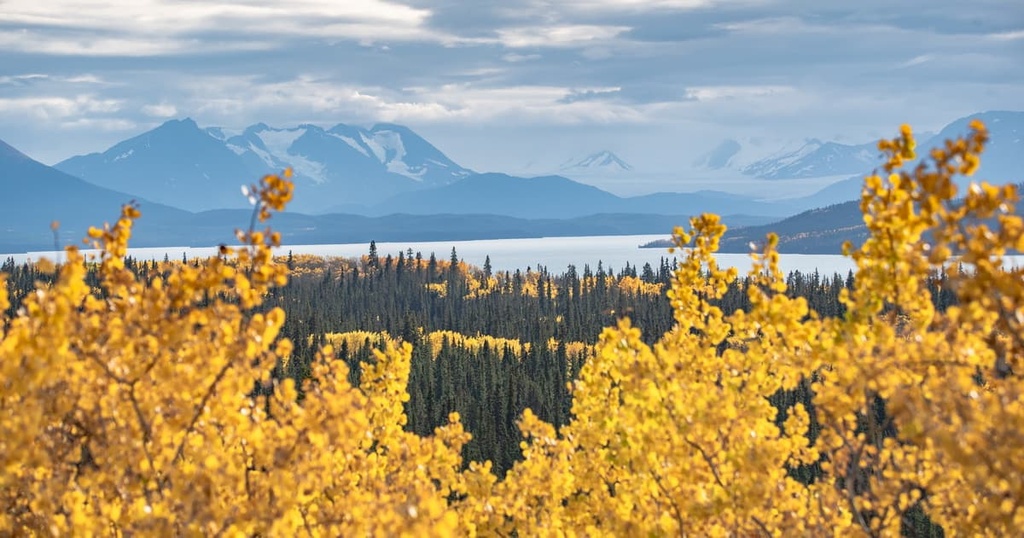 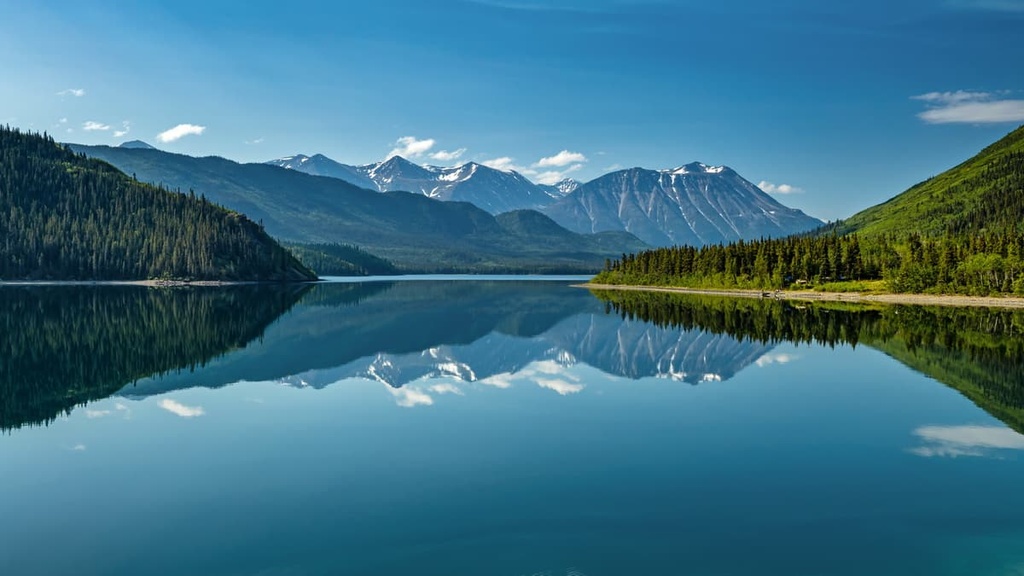 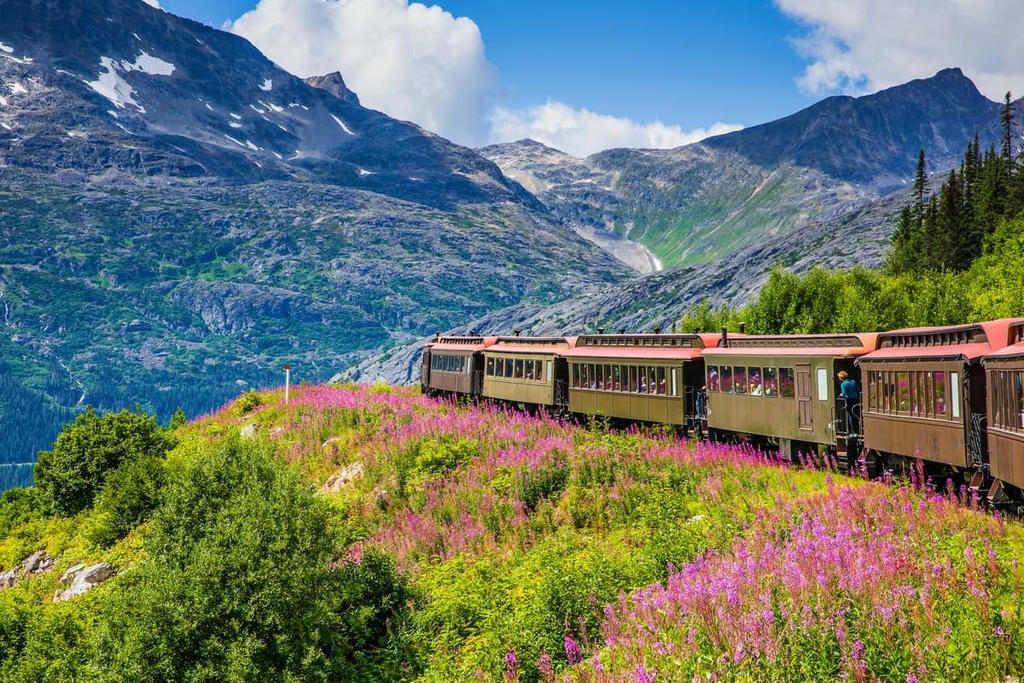