Known for its vast temperate rainforests and abundance of wildlife, the rugged and remote Tongass National Forest is located in the southeastern panhandle of the US state of Alaska. Often called the crown jewel of the US Forest Service, Tongass is home to 25 named peaks, the highest of which is Mount Armour (8,750ft/2,667m), and the most prominent of which is Mount Reaburn (5,791ft/1,765m). 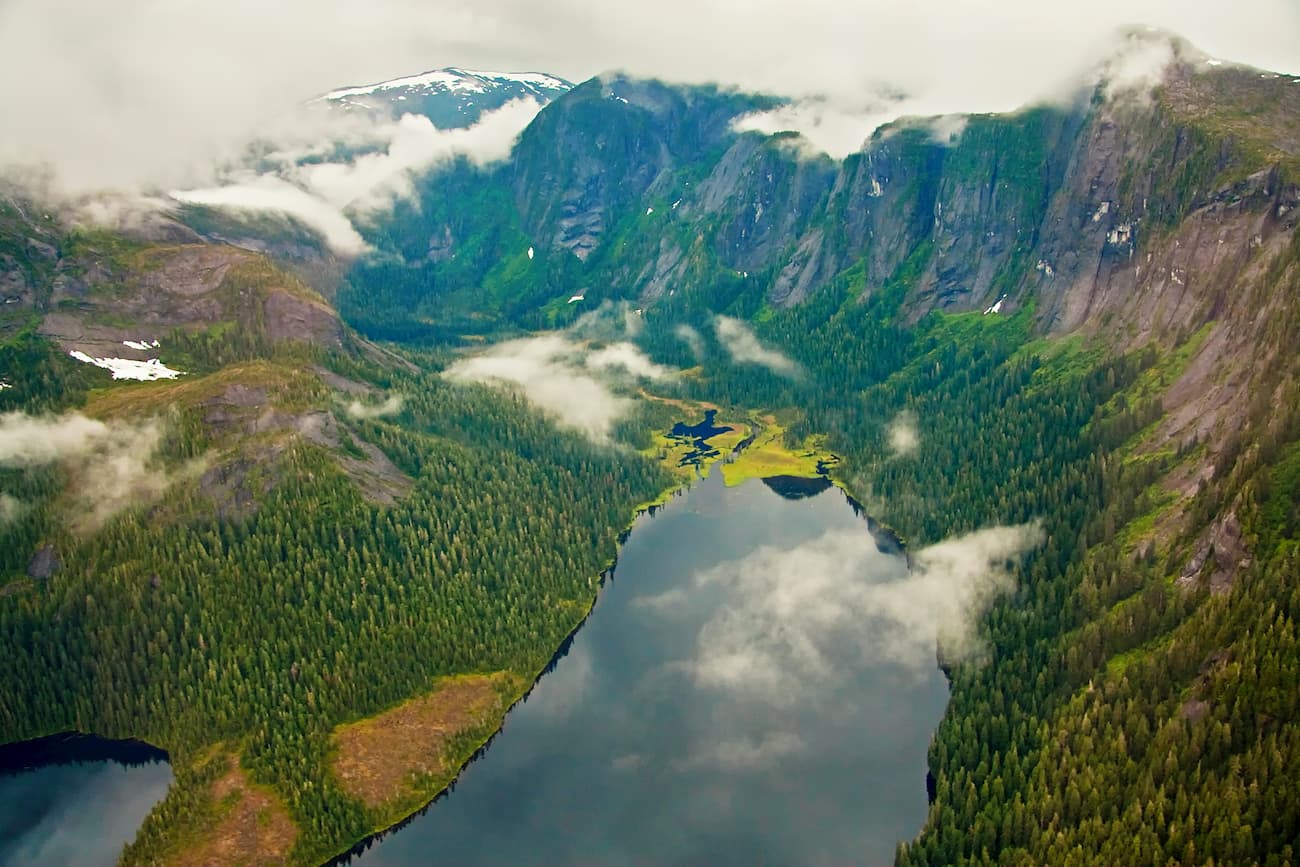 Tongass National Forest is located in Alaska’s southeast panhandle, where it contains over 26,254.95 square miles (68,000 sq. km) of land, making it the largest national forest in the United States. It covers a large section of the panhandle, extending from the Gulf of Alaska to the state’s border with Canada's British Columbia. The region in and around Tongass National Forest is very remote and is home to an array of different publicly-owned lands.

The forest is just across the border from British Columbia’s Tatshenshini-Alsek Provincial Park and is next to both Glacier Bay National Park and Wrangell-St. Elias National Park. Parts of the forest border the Kluane/Wrangell-St. Elias/Glacier Bay/Tatshenshini-Alsek UNESCO World Heritage Site, which is located in Alaska, British Columbia, and the Yukon.

Almost one-third of the forest is wilderness, including the following designated areas:

Tongass includes not only a section of the mainland panhandle but parts of the Alexander Archipelago and various fjords, glaciers, and peaks within the Saint Elias Mountains. The forest is headquartered in Ketchikan but there are local ranger districts throughout the panhandle, including in Juneau, Craig, Thorne Bay, Hoonah, Wrangell, Sitka, and Yakutat.

The peaks within Tongass National Forest are part of the Saint Elias Mountains. These mountains are the highest coastal range on earth. They formed as the Yakutat microplate subducted under the North American Plate, a process that started as the plate moved northward due to the action of the Fairweather Fault some 35 million years ago.

However, geologically, Tongass National Forest is perhaps best known for its fjords, which dominate its coastal landscapes. Fjords, or glacially carved valleys filled with seawater, are abundant around Tongass, a result of the region’s extensive ice cover during the Pleistocene glaciation.

Indeed, some 8,880 square miles (23,000 sq. km) of the region is old-growth forest, of which only a small portion is slated to be harvested in the near future. There is currently a push to stop old-growth timber harvesting altogether in Tongass National Forest.

But, at least 40% of the region is wetlands, rock, snow, ice, or other non-forest vegetation. Despite the lack of forest cover in much of the forest, Tongass is home to an abundance of species, some of which are rarely found outside of Alaska, British Columbia, and the Yukon.

Some of the region’s most important wildlife includes all five species of Pacific salmon, black bears, brown bears, bald eagles, mountain goats, wolves, and Sitka black-tailed deer. The Arctic tern is a known breeder in the region during the summer months.

The region in and around Tongass National Forest has seen constant human inhabitation for tens of thousands of years. The Tlingit, Haida, and Tsimshian people, among countless others, consider the region to be their ancestral homelands. Indeed, the name Tongass comes from the Taantʼa Ḵwáan (Tongass) group of Tlingit, who lived in the region around the current city of Ketchikan.

The Russians first set up a colony in Alaska between the 1780s and 1860s, however, much of their activity was focused on the Aleutian Islands, Kodiak Island, and the Kenai Peninsula. George Vancouver’s 1791-95 expedition brought some of the first Europeans to the region on board the Discovery.

During the 1880s, the region saw a decent amount of mining activity, particularly around Juneau. However, these never reached the same scale of the Klondike Gold Rush further to the north.

President Theodore Roosevelt officially created the Alexander Archipelago Forest Reserve by presidential proclamation in 1902. Five years later, he created Tongass National Forest, which was later combined with the Alexander Archipelago to create one single reserve in 1908. The forest was expanded further in both 1909 and 1925, giving it more or less the boundaries that we see today.

These days, Tongass National Forest is very remote. A significant portion of the forest is roadless and most of the communities in the region are accessible by boat and plane only. However, with the exception of wilderness areas, logging is still allowed in the forest, although there is a push to transition more toward sustainable salmon harvesting as the main source of revenue for the region.

Additionally, because of the 1971 Alaska Native Claims Settlement Act (ANCSA), about 988 square miles (2,560 sq. km) of land in Tongass National Forest was transitioned out of federal hands into the ownership of the Sealaska Corporation, a native-owned corporation in the region.

Moreover, unlike wilderness areas in the contiguous US, those found in the Tongass National Forest and around Alaska are open to subsistence hunting and fishing by Alaska Natives and rural residents. This provision was included as part of the 1980 Alaska National Interest Lands Conservation Act, which also officially recognized all land claims under the earlier ANCSA legislation.

Over 70,000 people currently live in the region, within thirty-one different communities. The largest community in the forest is Juneau, which is the state capital and has a population of just 31,000 people. Travel in and around the region is sustained by the Alaska Marine Highway and by commercial air service as most communities are not connected by road.

Here are some good places to hike in the Tongass National Forest near Juneau:

The Mount Roberts Trail leaves from the city of Juneau and continues for 4.5 miles (7.2km) to the summit of Mount Roberts. It is a very popular hike, particularly in the summer, as it offers great views of the city as well as beautiful wildflowers along the trail.

This is a 2 mile (3.2km) wheelchair-accessible trail that starts at Brotherhood Bridge off of Glacier Highway. It is very popular because it offers spectacular views of the Mendenhall Glacier as well as plenty of amazing wildflowers in the summer months.

This 3.5 mile (5.6km) trail takes visitors to the Mendenhall Glacier, the southernmost glacier in Alaska that’s accessible by road. From the glacier, more intrepid hikers can continue off-trail further into the backcountry for a longer adventure.

These are some good trail options near Sitka in the western portion of Tongass National Forest:

This trail starts south of Sitka and requires a boat or floatplane to access. It is about 5.9 miles (9.5km) long and isn’t well maintained, but it is a nice hike to the stunning Redoubt Lake deep in the backcountry.

The Indian River Trail is a popular hiking destination near Sitka. It walks along the Indian River to a beautiful waterfall where you can often see bears fishing for salmon in the summer months. Visitors can access this 5.3 mile (8.5km) trail from town using the community bus system.

This 6 mile (9.7km) hike is a must-do in the summer months when the wildflowers are out in full force. The trail brings visitors to a stunning alpine meadow with great views of Sitka Sound. It was even used extensively during World War II by the US military and there are a few ruins along the trail.

Here are some hiking options in the Ketchikan region in the southern part of Tongass National Parks:

The Deer Mountain Trail is a 5.5 mile (8.8km) out and back hike that takes travelers to the top of a scenic hill that overlooks the town of Sitka. It is a nice hike in the summer and early snow when the summit is clear of snow. It also offers nice views of Ketchikan Lake and of both Dude and Diana Mountains.

The Whitman Trail is a nice 2.2 mile (3.5km) walk near the southern part of Ketchikan. It takes you on a nice path around Whitman Creek and Achilles Creek until you reach the Achilles Creek Diversion Dam. There are informational signs along the way to help you learn more about the area during your walk.

The Salvage Trail is 3.4 miles (5.5km) long and is a path that follows rolling terrain through the woods near Revilla Road north of Ketchikan. It offers good views of Brown Mountain, Ward Mountain, and Diana Mountain without too much elevation gain.

Main Cities (Where To Stay)

Tongass National Forest is remote, so getting from place to place usually requires a boat or plane. However, here are some of the largest communities in the region where you can start your adventure:

Juneau is the capital city of the state of Alaska, even though it has just 31,000 residents, roughly 10% of Anchorage’s population. The city has its own airport, which receives connections from Seattle and Anchorage. If you’re flying into smaller towns around the southeast panhandle, you will likely stop in Juneau en route.

Additionally, the city is served by the Alaska Marine Highway, which connects it to the continental US and Canada, as well as South Central Alaska. One can also take the highway to either Haines or Skagway and then drive to Whitehorse, mainland Alaska or the rest of North America via the Alaska Highway.

Ketchikan is the fifth-most populous city in Alaska, with a population of over 8,000 people. It is located in the southernmost section of Tongass National Forest on Revillagigedo Island. The city is known for its large collection of standing totem poles and its very rainy weather.

Ketchikan has an international airport with good connections around Alaska, Canada, and the rest of the United States. It’s also served by the Alaska Marine Highway and the Inter-Island Ferry Authority.

Sitka is located on the west side of Baranof Island on the western edge of Tongass National Forest and is about the same size as Ketchikan in terms of population. The city is home to US Coast Guard Air Station Sitka. Like other towns in the region, it is only accessible by airplane or by the Alaska Marine Highway. 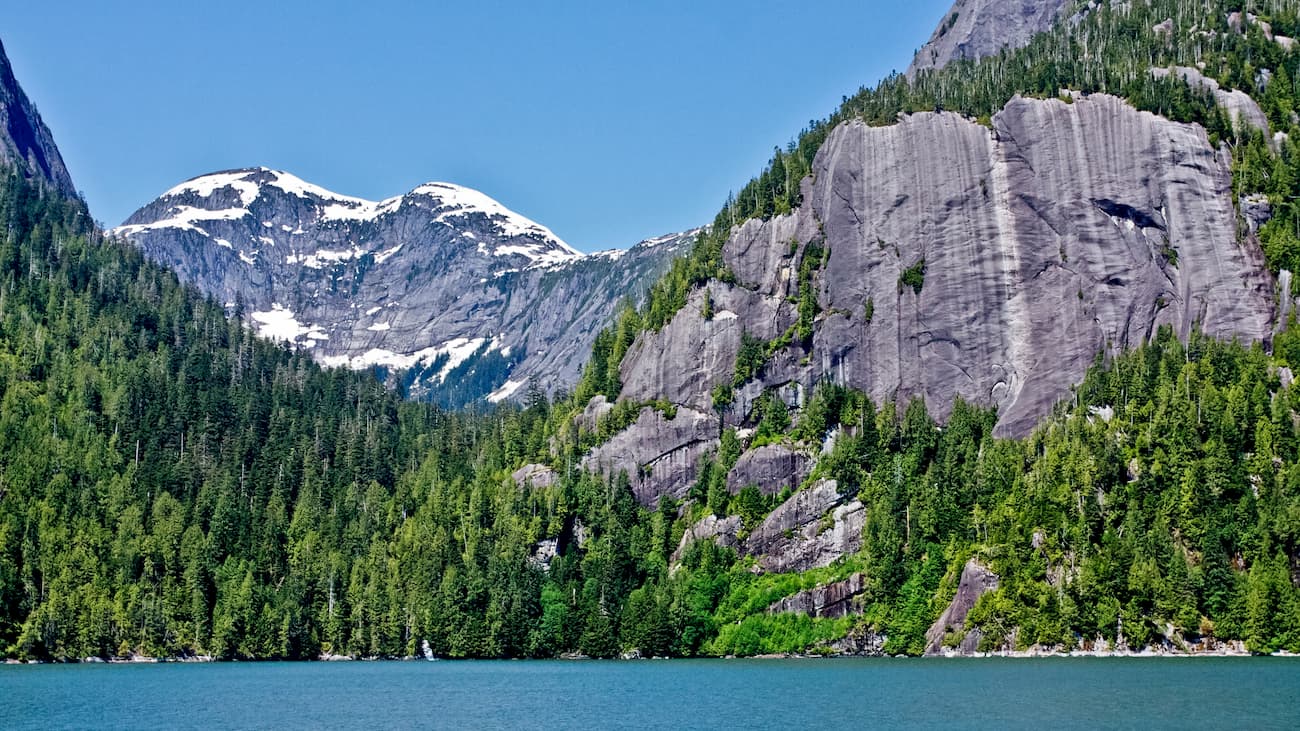 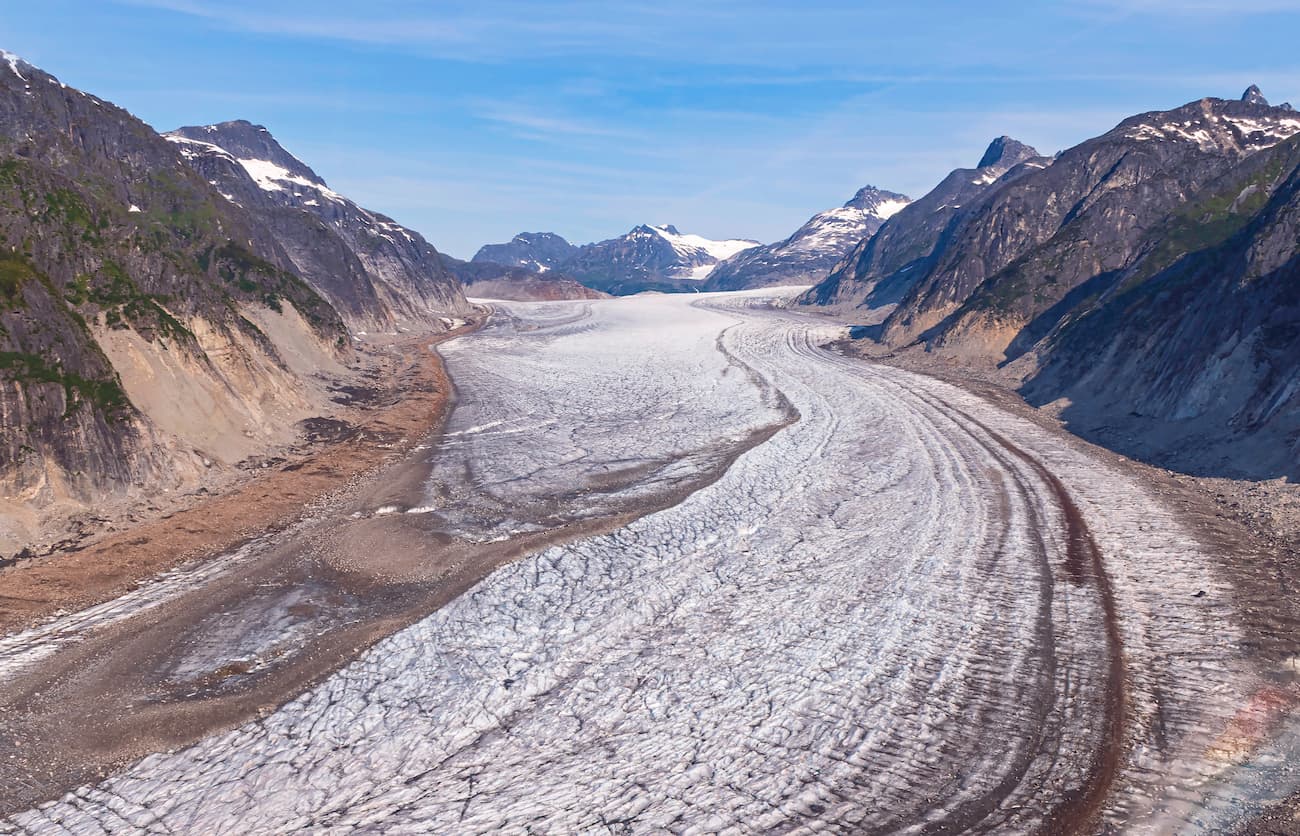 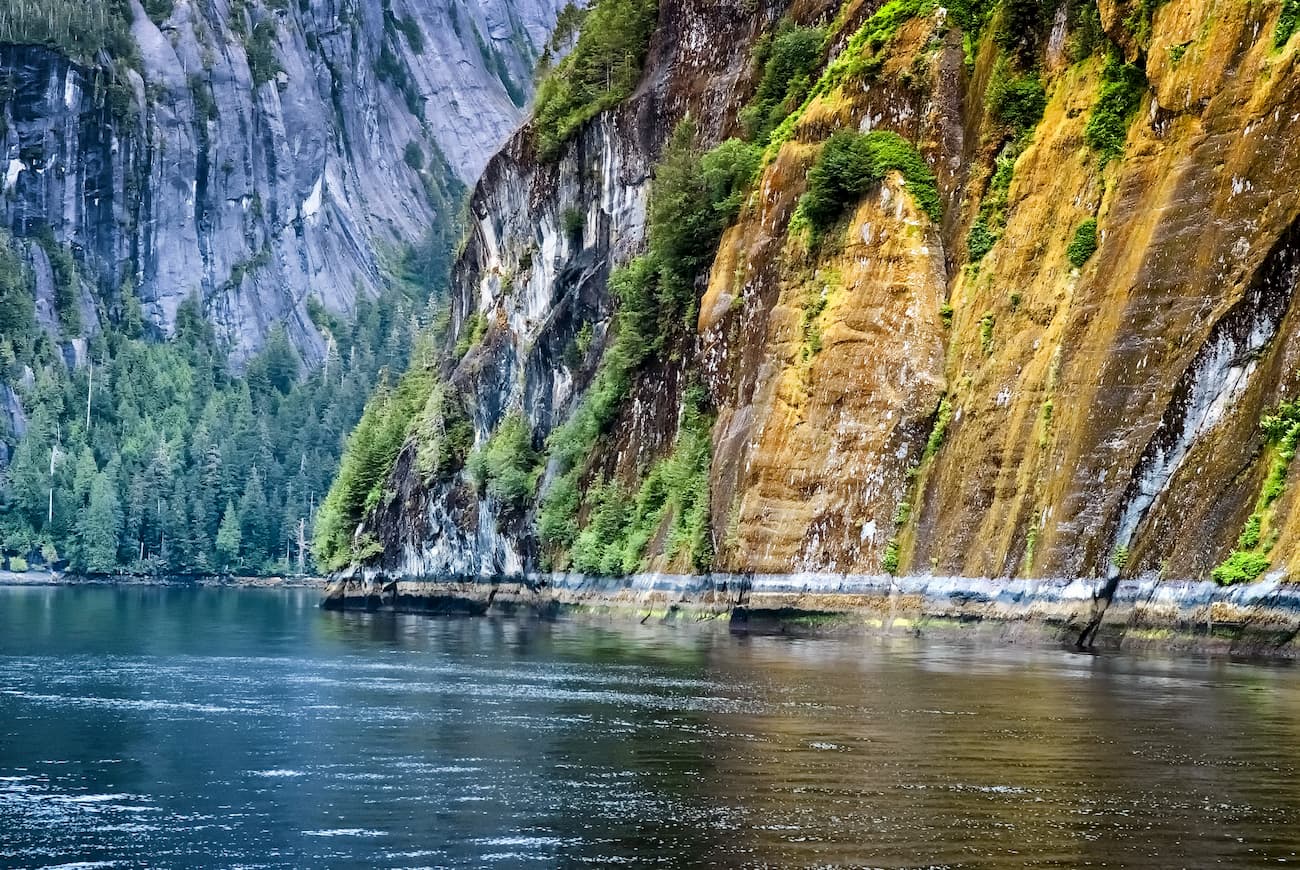 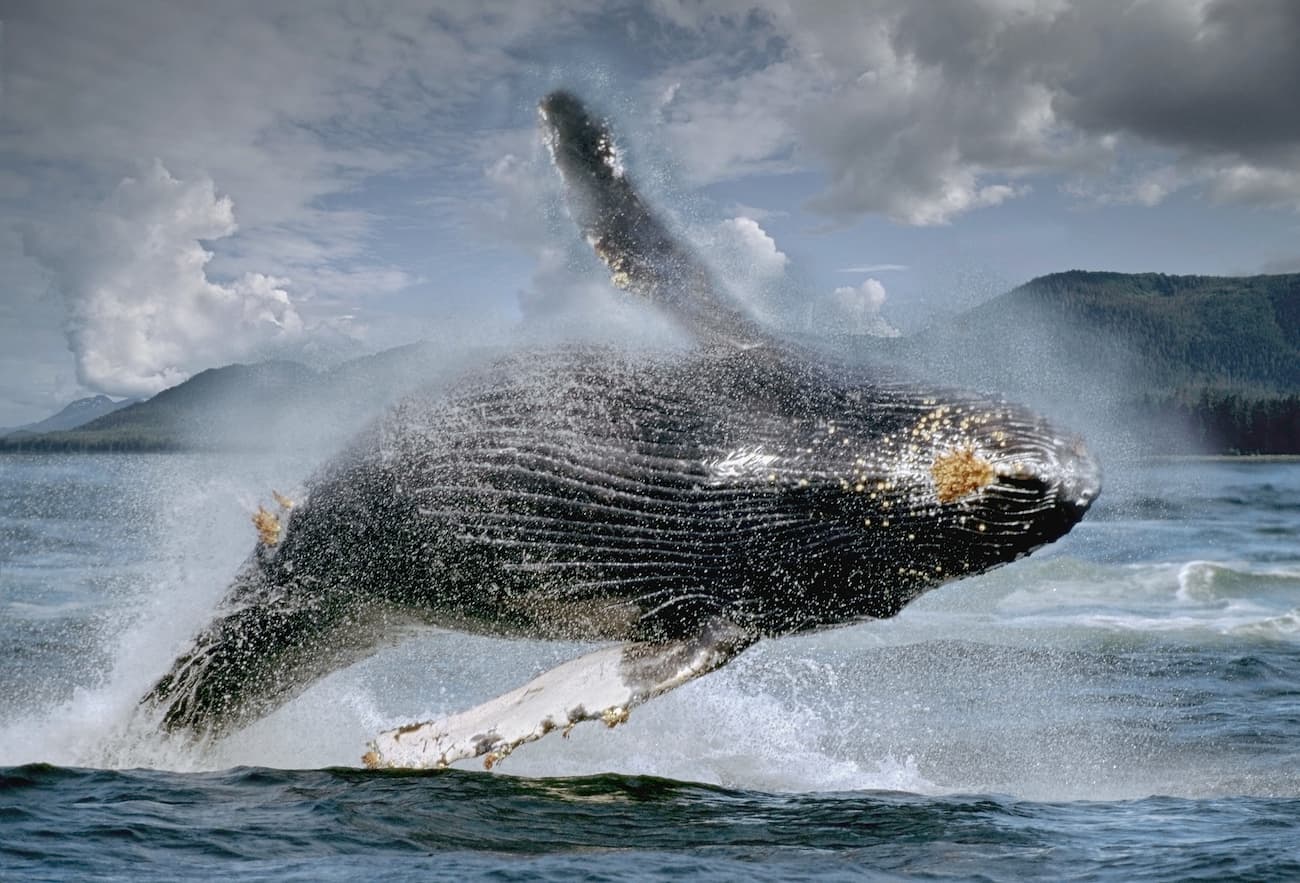 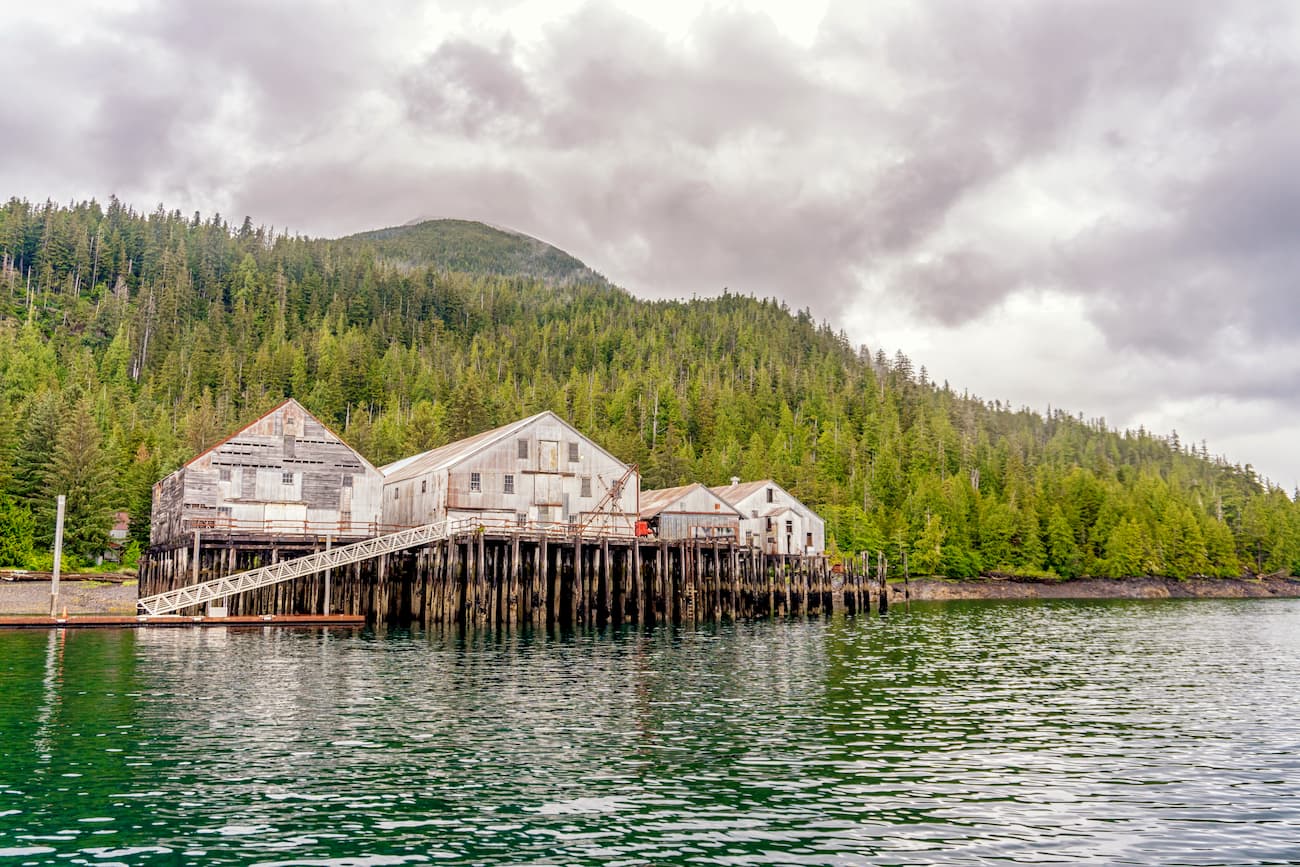 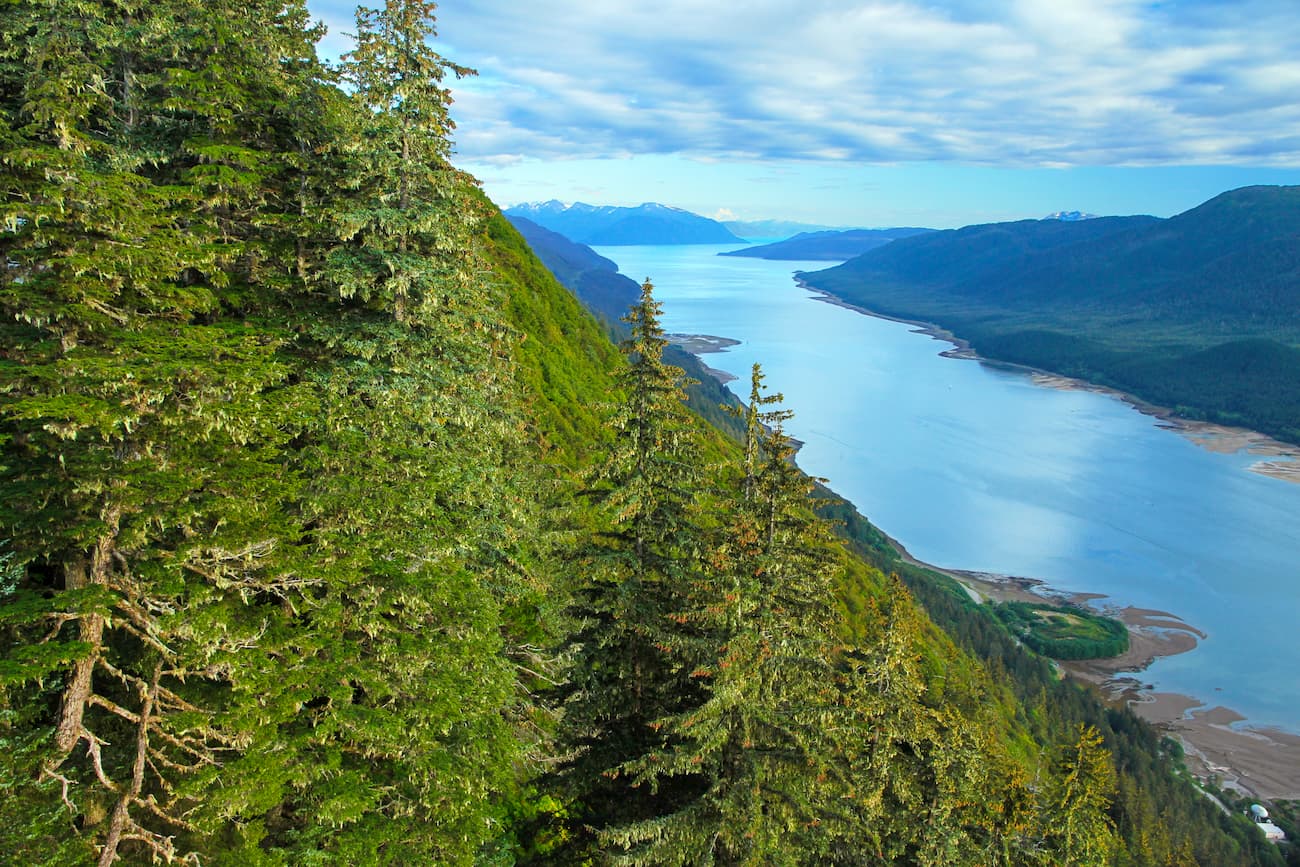