Situated in the northwestern corner of the Gulf of Alaska, Kodiak Island (Alutiiq: Qikertaq) is a large island that’s part of the US state of Alaska. With a total land area of 3,595 square miles (39,311,24 sq. km), Kodiak Island is the largest island of the Kodiak Archipelago and the second-largest island within the US. 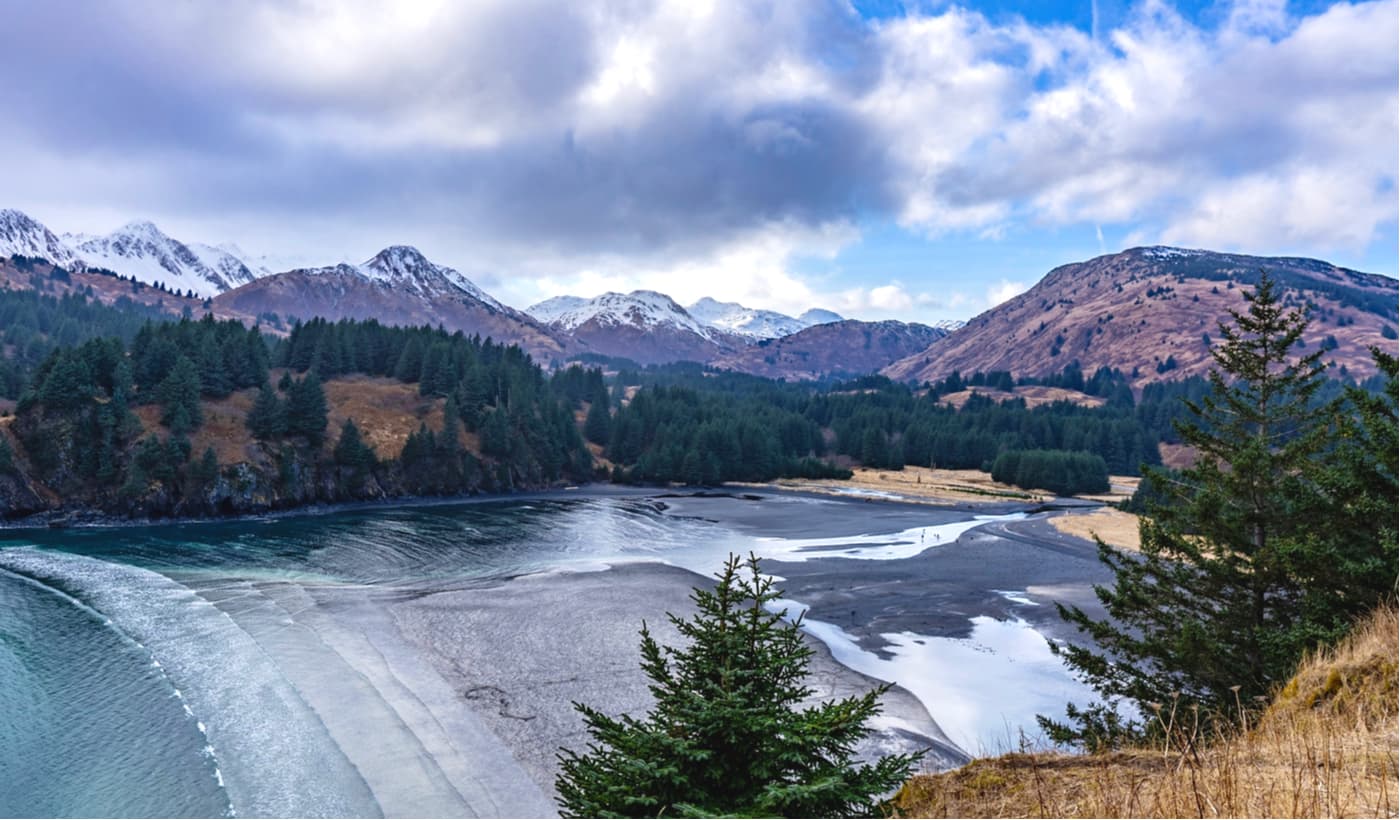 The physical island of Kodiak Island is located within the “Kodiak Island Borough,” which is an administrative region of Alaska. The borough covers an area of 12,022 square miles (31,140 sq. km) in and around South-Central Alaska, one-quarter of which is on the island itself.

However, the borough also includes a patch of coastline on the northeasternmost section of the Alaska Peninsula, which is just across the Shelikof Strait from Kodiak Island.

In the entire Kodiak Island Borough, there are nearly 14,000 residents, which gives the region a population density of about 2 people per square mile (1 person per square kilometer). However, the vast majority of people in the borough live on Kodiak Island, with nearly half of the total population living within the community of Kodiak.

Geologically, the Kodiak Island Borough is part of the larger Aleutian Trench zone in southern Alaska. The trench itself runs for 2,100 miles (3,400km) from the Pacific Ocean just east of Russia to the eastern edge of the Gulf of Alaska.

Interestingly, the area around Kodiak Island itself is also home to a large seamount, which is essentially an underwater mountain. These seamounts are often the remnants of extinct volcanoes that rise up at least 3,281ft (1,000m) from the seafloor but do not crest the water’s surface.

The Kodiak Seamount is actually the oldest within the greater Kodiak-Bowie Seamount Chain and is believed to be around 24 million years old. This seamount will eventually cease to exist as the Pacific Plate moves under the North American Plate over the next few million years.

The geology of Kodiak Island is surprisingly complex, as the bedrock in the region can be traced to a variety of terranes within South Central Alaska. Indeed, rocks from the Chugach and Prince William Terranes are found on and near Kodiak Island, in addition to the igneous rocks of the Kodiak Batholith.

As many of the mountains within the Kodiak Island Borough are part of the Aleutian Range, they are volcanically active. Indeed, the 1912 eruption of Novarupta, some 100 miles (160km) northwest of Kodiak Island wreaked havoc among the island’s 500 residents.

The Kodiak Island Borough is also known for its risk of serious seismic activity. During the 1964 Great Friday earthquake and tsunami, most of Kodiak Island’s waterfront and business district were completely wrecked by the 30 foot (9.1 meter) waves. Parts of Kodiak Island were permanently raised by 30 feet (9.1 meters) while the Native villages of Old Habor and Kaguyak were destroyed, along with much of the region’s fishing fleet.

However, much of the landscape that we see today is the result of the extensive ice sheet that covered the region during the Pleistocene glaciation. These glaciers carved out deep fjords, which now serve as ice-free bays for the region’s prolific fishing industry. Additionally, the glaciers sculpted and shaped the Borough’s many mountains and valleys, giving them the shapes they have to this day.

Much of the Kodiak Island Borough is federally managed as part of a National Park, National Forest, or National Wildlife Refuge. The region is heavily mountainous and also contains massive swaths of coniferous forests. Plus, the northern part of the Kodiak Island Archipelago is also home to temperate rainforests, particularly on Afognak Island.

The ocean surrounding Kodiak Island is rich in salmon, halibut, and king crab. Meanwhile, the island itself is known for its population of elk, Sitka deer, and mountain goats.

However, perhaps the best-known resident of Kodiak Island is the Kodiak bear. The Kodiak bear is a subspecies of brown bear and is the second-largest ursine on earth, after the polar bear. This subspecies is very similar to the rest of the grizzly bear (Ursos arctos horribilis) population in mainland Alaska and is closely related to the now-extinct California grizzly bear.

The Kodiak bear is particularly known for its large size, which can exceed 1,500lbs (680kg). This makes it substantially larger than many other brown bears, which are usually between 254-794lbs (115-360kg), and slightly smaller than most polar bears. Interestingly, though, the Kodiak bear does not have a different lifestyle and diet from the mainland Alaska grizzly bear, despite their huge size difference.

Kodiak Island and the surrounding region on the Alaska Peninsula has a rich history of human inhabitation dating back at least 7,000 years. The island is the ancestral homeland of the Sugpiaq of the Alutiiq Nation. The native people of Kodiak Island hunted, fished, farmed, and gathered in the region over the course of millenia before the arrival of the Russians and other European settlers.

Perhaps the first non-native visitors to the island were a part of Russians in 1763 under the leadership of fur trader, Stepan Glotov. But, the first white people to settle on the island were led by Grigory Shelikhov, a Russian fur trader who founded the Three Saints Bay settlement in 1784.

The Three Saints Bay settlement was eventually moved to the area that is now known as the community of Kodiak. Soon, the settlement became a center of trade between the native people of the region and the Russian fur trappers.

But, this coexistence was not always peaceful. In fact, Shelikhov and his fur traders massacred hundreds of Sugpiaq men, women, and children during the 1784 Awa’uq Massacre. The location of the massacre, Refuge Rock (off the eastern coast of Sitkalidak Island), is now a sacred place known as Awa’uq to the Alutiiq.

Additionally, the Russian settlers often forced the Alutiiq into working for them as hunters and fur trappers, through threats, violence, and hostage-taking. Empress Catherine II of Russia even authorized the establishment of an Orthodox mission on the island in 1794 in an attempt to convert the Alutiiq to Christianity.

The Russian settlement of Kodiak Island further decimated the Alutiiq population during the 1837-1839 smallpox epidemic, which killed an estimated one-third of the native people in the region. By the mid-1800s, nearly 85% of the Alutiiq people on the island had died from disease or violence.

With the sale of Alaska to the United States in 1867, Kodiak quickly became a center for commercial fishing. During this time, many animals were introduced to the island, including the mountain goat, Sitka deer, and muskrats, which eventually led to the establishment of the Kodiak National Wildlife Refuge.

The town of Kodiak was officially incorporated in 1941, as American involvement in World War II was increasing. The proximity of Alaska to Japan led to fears that the state would be attacked, so Kodiak was quickly turned into a fortress to protect from enemy invasion.

These days, Kodiak Island is home to the largest Coast Guard base in the United States, which includes Coast Guard Base Kodiak, Coast Guard Air Station Kodiak, Aids to Navigation Station Kodiak, and Communications Station Kodiak. The US Navy also runs a small base called Naval Special Warfare Cold Weather Detachment Kodiak for the training of Navy SEALs.

The Island’s economy is mainly the result of a mix of military activity, commercial fishing, and tourism. There are also four elementary schools, one middle school, and one high school on the island, in addition to a small satellite campus of the University of Alaska, Anchorage.

The Kodiak Island Borough is vast, so it’s impossible to give detailed information about all of its great hiking areas. But, the region is home to two popular federally-managed parcels of land with great opportunities for hiking and adventure.

The Refuge has an administrative center in the city of Kodiak. It is home to seven major rivers and is a spawning ground for all five species of Pacific Ocean salmon: sockeye, chinook, coho, pink, and chum.

Visitors to the wildlife refuge can see over 250 species of birds as well as plenty of wildlife, including Kodiak bear, red fox, ermine, tundra vole, mountain goat, elk, caribou, and Sitka deer.

Within the refuge, there are nine public use cabins, which can be reserved in advance and are accessible by boat or floatplane. The area is very popular among anglers, who hope to catch one of the region’s prized salmon species. It also offers endless opportunities for off-trail travel and hiking for experienced backpackers.

Katmai National Park and Preserve is partially located within the Kodiak Island Borough. The Park and Preserve cover an area of 6,395.43 sq. miles (16,564,09 sq. km) of land, which is roughly between the size of the states of Connecticut and New Jersey.

The majority of the National Park is wilderness, which is perfect for hikers looking to get well off the beaten path. The Valley of Ten Thousand Smokes and the stunning summit crater lake of Mount Katmai are some of the best-known aspects of the park.

But, the majority of visitors to Katmai stay at Brooks Camp, which is famous for its concentration of brown bears fishing at Brooks Falls. Getting to Brooks Falls requires a floatplane connection via King Salmon, the closest town to the park.

The community of Kodiak is the largest populated area on Kodiak Island. Kodiak is the main community on the island and is the transportation center of the region. The city is home to around 6,000 people and has air and boat connections to other major population centers in Alaska.

Anchorage is the largest city in the state of Alaska. The city is home to a major international airport, which is the first stop for nearly all air traffic into the state, excluding southeast Alaska. Flights from Anchorage to Kodiak run multiple times per day and take just under one hour.

Homer is a city of around 6,000 people located on the western edge of the Kenai Peninsula. Homer is a 4-hour drive from Anchorage, which follows the scenic Seward Highway until its junction with the Sterling Highway. From Homer, you can also take a ferry to Kodiak Island. 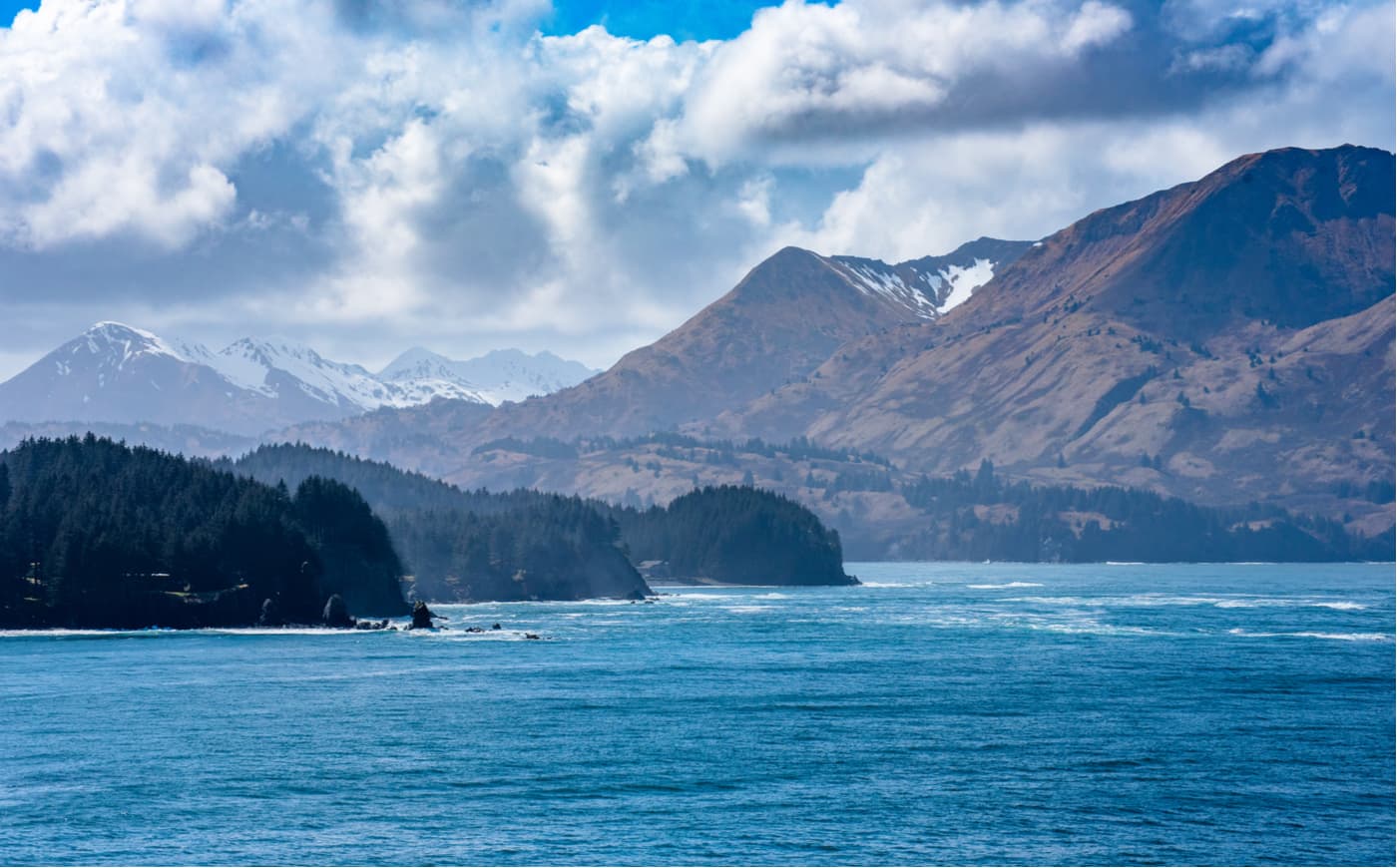 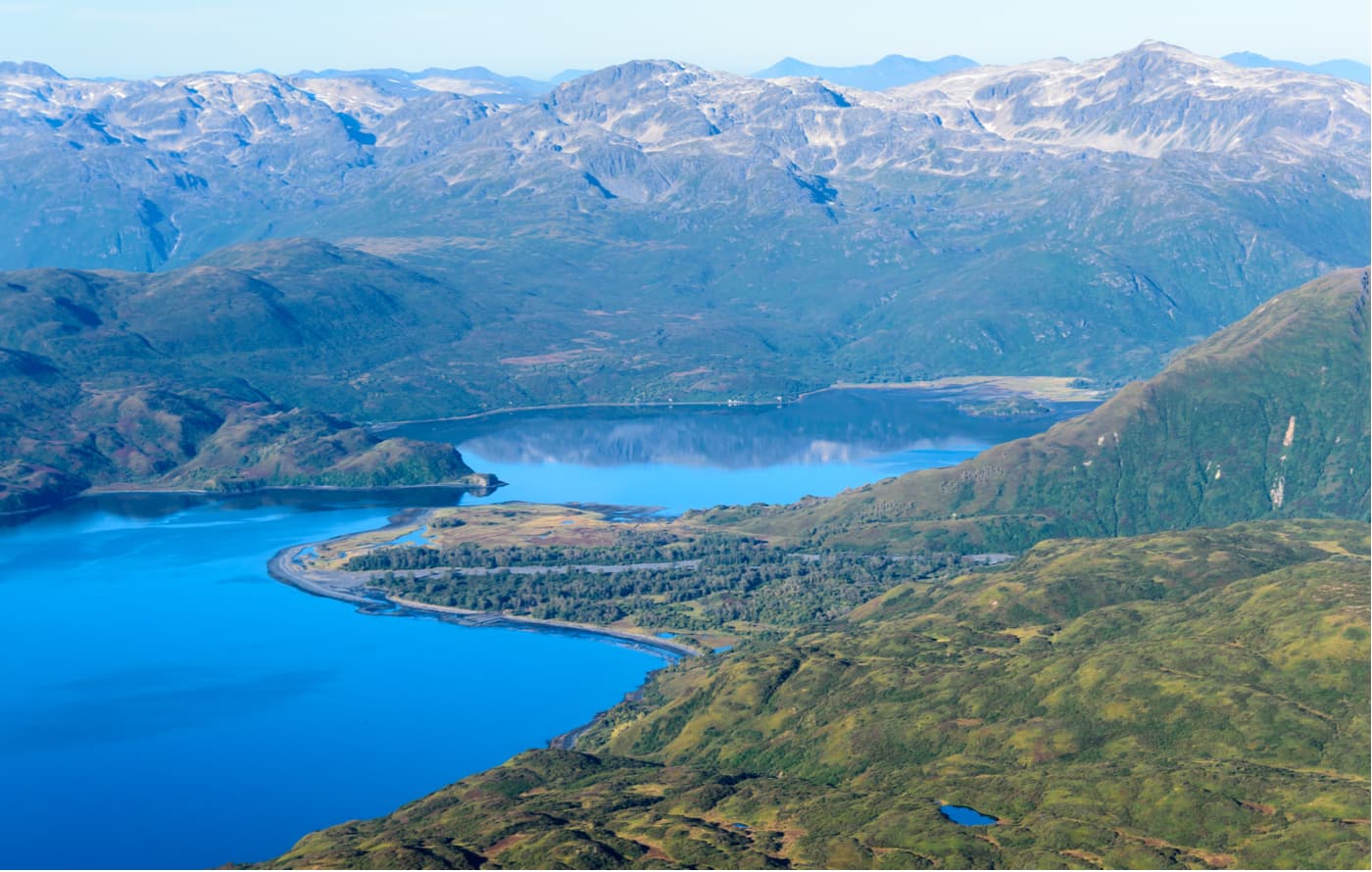 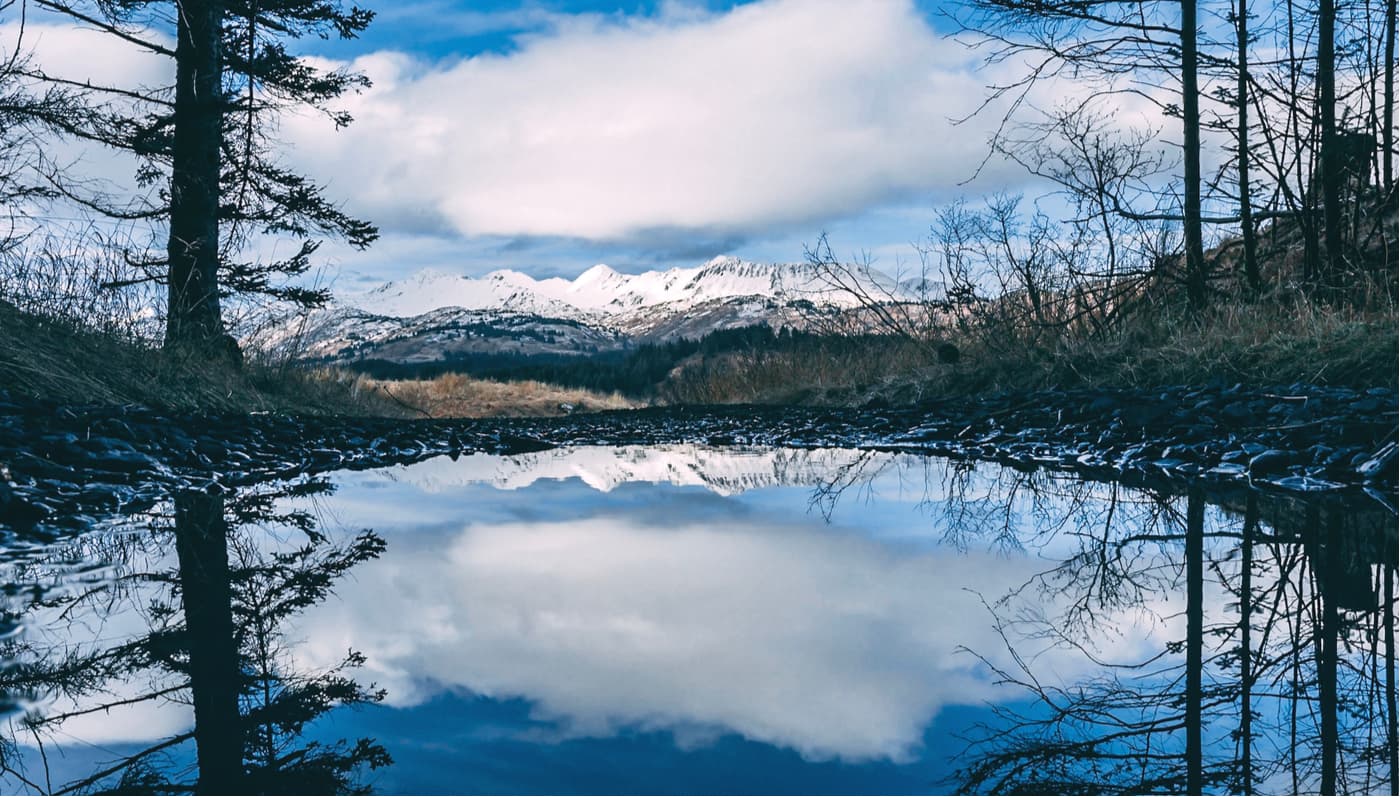 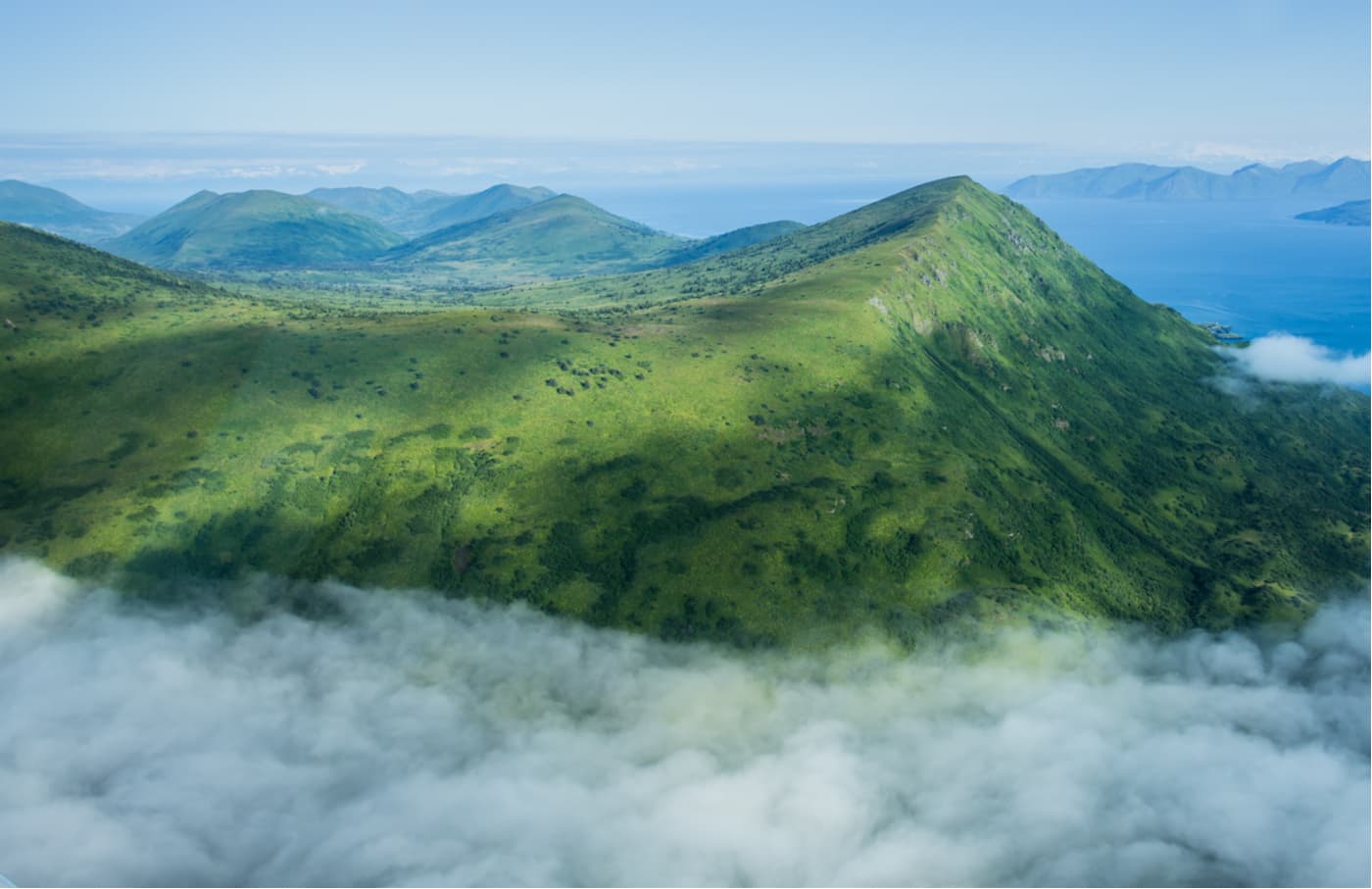 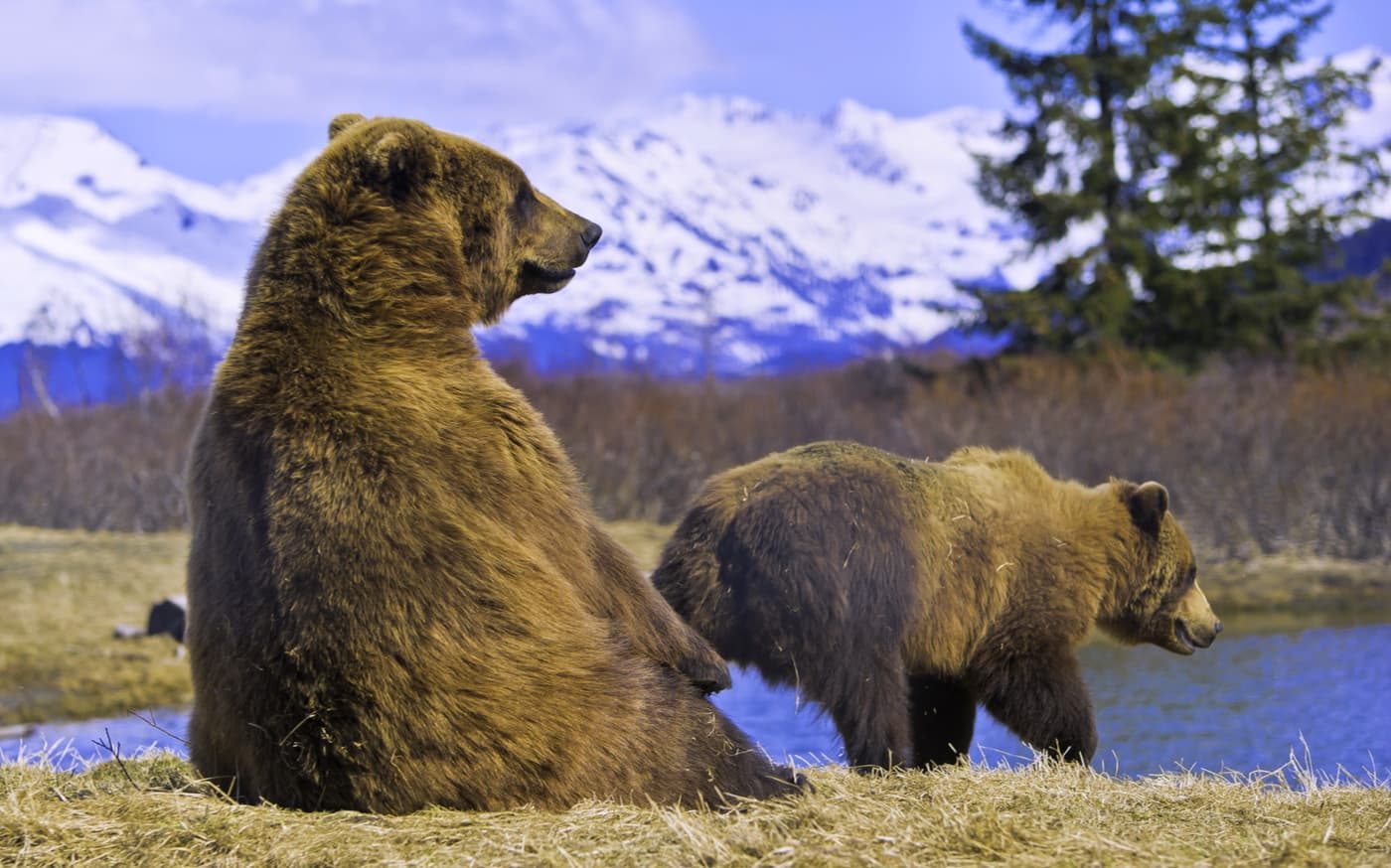 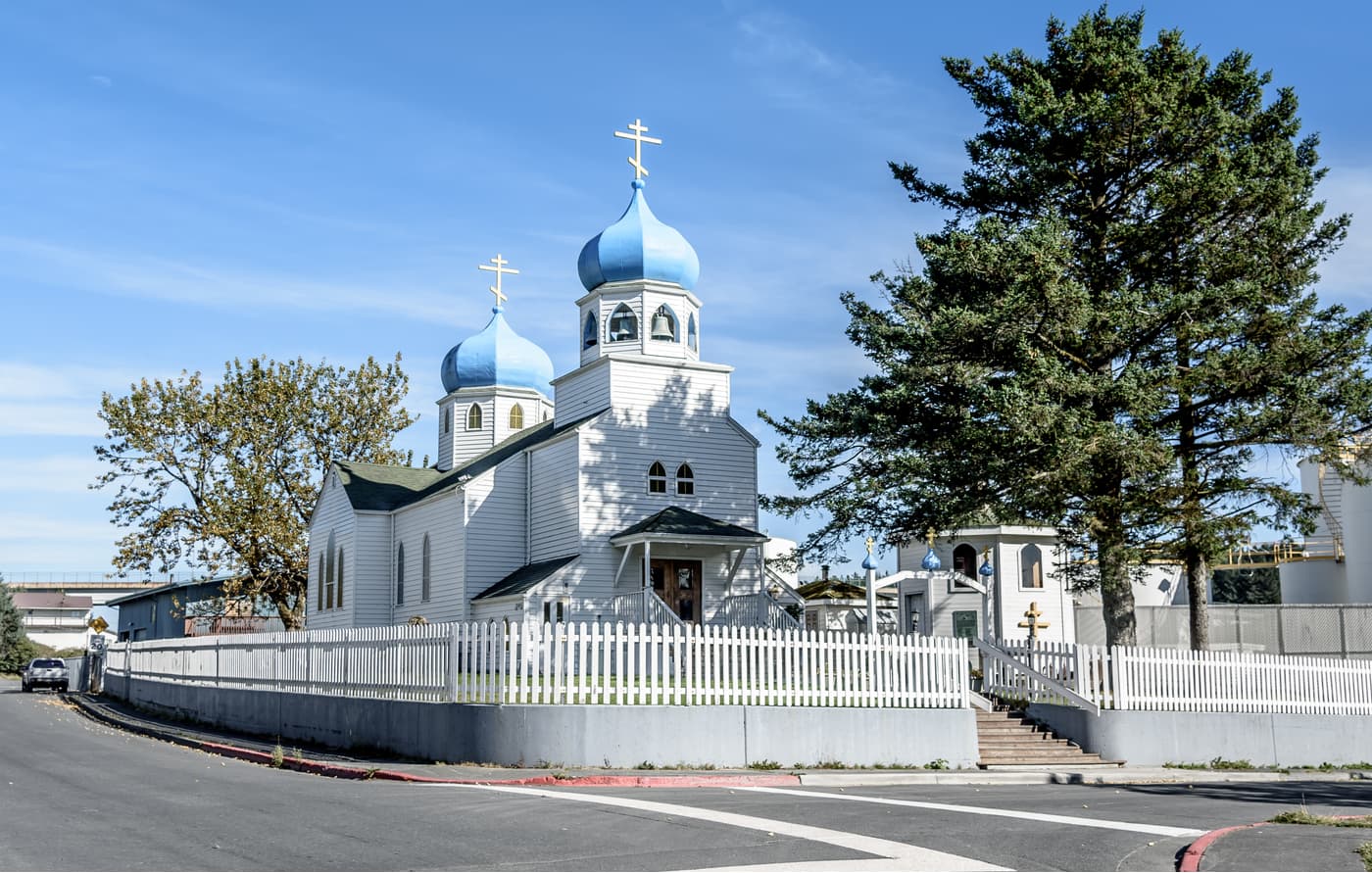