Much of the park is dominated by the Saint Elias Mountains, which are home to some of the highest peaks in both the United States and Canada. Interestingly enough, although these are some of the tallest mountains in North America, many of these peaks are within 10 miles of the ocean, providing them with some of the most drastic vertical relief in the entire world. Wrangell-St. Elias Park and Preserve is home to 51 named mountains, the highest and most prominent of which is the venerable Mount Saint Elias (18,009ft/5489m).

Additionally, Wrangell-St. Elias National Park and Preserve contains the largest single continuous wilderness area in the United States at 9 million acres (3.6 million ha) in area. No motorized or mechanized vehicles or equipment is allowed within a wilderness area, making this portion of the park one of the most remote parts of the entire United States.

The land currently contained within Wrangell-St. Elias National Park and Preserve is the ancestral home of the Ahtna, Tanana, Eyak, and Tlingit people, who have lived in the region for at least the last thousand years. Danish cartographer, Vitus Bering, while employed by the Russians, was the first European to visit the area in 1741, after which fur traders soon set up commercial activities and started a long history of conflict with the local people.

After gold was discovered in the Canadian Klondike in the 1890s, prospectors flocked to the area, finding small amounts of gold and extensive copper resources in what is now known as the Copper River and near the Kennicott Glacier. Mining operations soon began to harvest the area’s rich copper deposits in and around the new village of Kennecott.

Commercial resource extraction continued in the region for decades, until Canada established the Kluane Game Sanctuary (now Kluane National Park) in 1943 on its side of the international border. This act encouraged the US Department of the Interior to consider a corresponding system of parks on the US side of the border. These talks included areas such as the then-Glacier Bay National Monument, as well as parts of the Wrangell and Chugach mountains.

The talks were unfruitful until President Jimmy Carter invoked the Antiquities Act in December of 1978 to establish 17 National Monuments in Alaska, which included the 10.9 million acre (4.4 million ha) Wrangell-St. Elias National Monument. This move angered many white Alaskans, who considered the act to be a federal land grab, but was supported by the remaining native Ahtnas, who were given subsistence hunting rights on their ancestral land.

After the Alaska National Interest Land Conservation Act (ANILCA) was signed into law in November of 1980, however, the monument was officially created into a national park and preserve, with preserve and park boundaries drawn in accordance with the value of scenery versus potential hunting quality in different areas. As of 1979, Wrangell-St. Elias, along with Kluane and Glacier Bay National Parks is a considered UNESCO World Heritage Site due to its importance as a grizzly bear, caribou, and Dall sheep habitat.

The lands contained within Wrangell-St. Elias National Park and Preserve are as diverse as they are vast. The park contains lands located in the Alaskan interior that are covered with permanent ice and large, braided glacially-fed rivers. Plus, the St. Elias Mountains rise up from the Gulf of Alaska, providing dramatic relief to the landscape as well as a unique mix of ecological communities.

Wrangell-St. Elias National Park and Preserve is world-renowned for its amazing quantity of outdoor recreation opportunities and stunning scenery. Remote and as wild as ever, the national park is a fantastic place to get into the mountains and experience their beauty firsthand.

The vast majority of Wrangell-St. Elias National Park and Preserve is wilderness, which means you’ll find few developed trails and roads around these parts. But, if you’re looking for an adventure, you’ll certainly find it in this park.

Of the handful of hiking trails that exist in the park, only the first few miles are actively maintained, after which point they become cross country routes, so come prepared. Here are some of the most popular hiking trails in Wrangell-St. Elias National Park:

The Skookum Volcano Trail starts at mile 36.8 of Nabesna Road and travels 2.5 miles over varied terrain to a high pass with stunning views. The trail stops at the pass, but it is possible to make a loop from up and over the pass and return back to your car.

This is one of the few roadside day hikes in the park, which takes you up an alluvial fan and into a stunning white spruce forest. After a few creek crossings, the trail makes its way up to the high pass, where you can enjoy panoramic views and keep an eye out for the elusive Dall sheep. Overall, the hike takes most people 2-4 hours, round-trip, so it’s a nice jaunt into Wrangell-St. Elias’ backcountry.

The Caribou Creek Trail beings at mile 19.5 on the north side of Nabesna Road, though parking is available only at mile 18.9. From the trailhead, this hike takes you up into the hills, following an ATV route through a valley, eventually bringing you to a small, two-person public use Caribou Creek Cabin, which is reservable with the park service.

Once at the cabin, you’ll have fantastic views of the hills and ridges around the valley. From there, you can choose to return to your car or follow a game path up into the ridges for even better panoramic views. At just six miles roundtrip, this is a nice, short hike, with the potential for a fantastic overnight stay at a rustic cabin.

The Lost Creek Trail leaves Nabesna Road at mile 31.2 and follows a maintained path for about seven miles up toward a high mountain pass. After leaving the trailhead, this hike takes you through a dense forest and along a creek bed into a continuously narrowing valley, where you can eventually top out onto the pass and meet up with the start of Trail Creek.

The Lost Creek Trail takes you into the heart of bear country, exposing you to some of the most pristine alpine terrain in the park. Although it’s tough walking up to the pass, the views from the top are unparalleled and well worth the effort.

We feel kind of funny talking about “major cities” around Wrangell-St. Elias National Park because, well, there are none. This is true wilderness, with only a handful of small lodges, roadhouses, and villages dotting the landscape. You’ll have to drive quite a way to get anywhere “civilized” in Wrangell-St. Elias National Park and you can go nearly 300 miles between services, depending on where you drive.

But, there are a few main towns in the area that can be a good stopping point for you on your journey. Here are some places to stay near Wrangell-St. Elias National Park:

McCarthy, Alaska is a small town with just about 30 residents. Situated at the foot of the Wrangell Mountains, some 120 miles from the town of Cordova, one can get to McCarthy by plane or by the McCarthy Road spur section of the Edgerton Highway from Chitina. In fact, there’s a shuttle from Anchorage nearly every day of the week that will drive you the six hours from Alaska’s largest city right to McCarthy. Who knew?

McCarthy may be small, but it has a number of lodging options available. The town is a popular stop for anyone trying to get to Kennecott and the Wrangell-St. Elias National Park and Preserve.

The town of Glennallen is home to about 500 people and is located at the intersection of the Glenn and Richardson Highways, about 189 miles from Anchorage. Glennallen sits just outside the western edge of Wrangell-St. Elias National Park and Preserve, so it’s a nice place to stop en route to the park. There are plenty of RV parks, lodges, fuel services, and places to eat in town, so it worth stopping in Glennallen before heading into the wilderness of Wrangell-St. Elias. 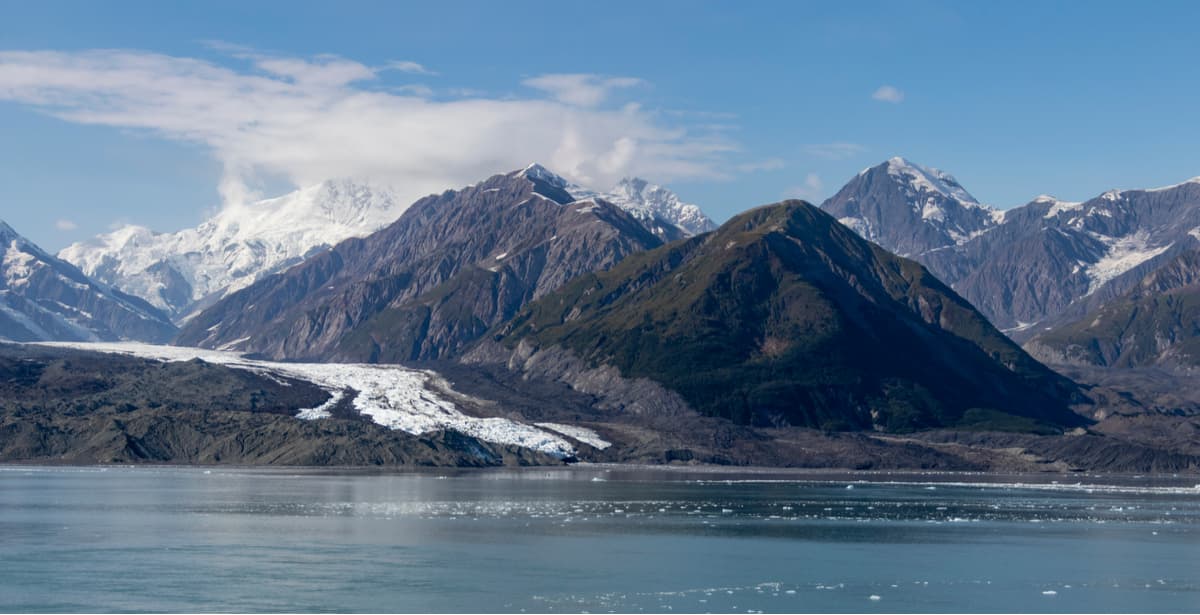 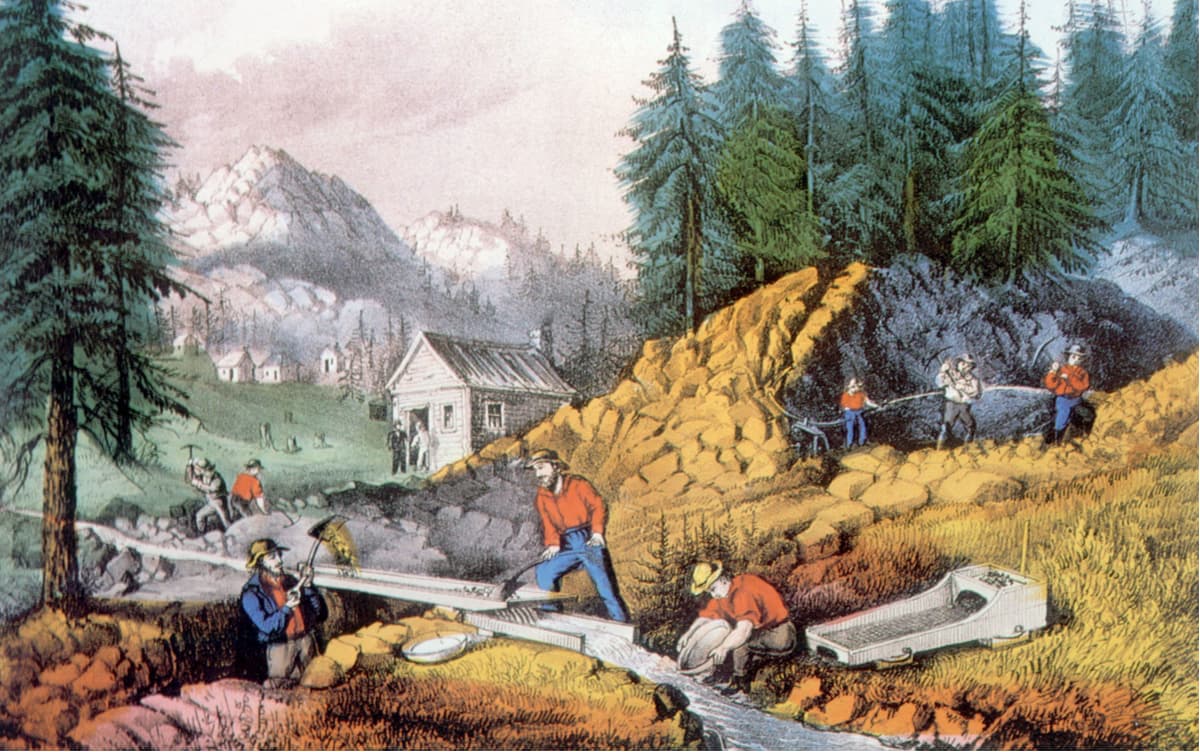 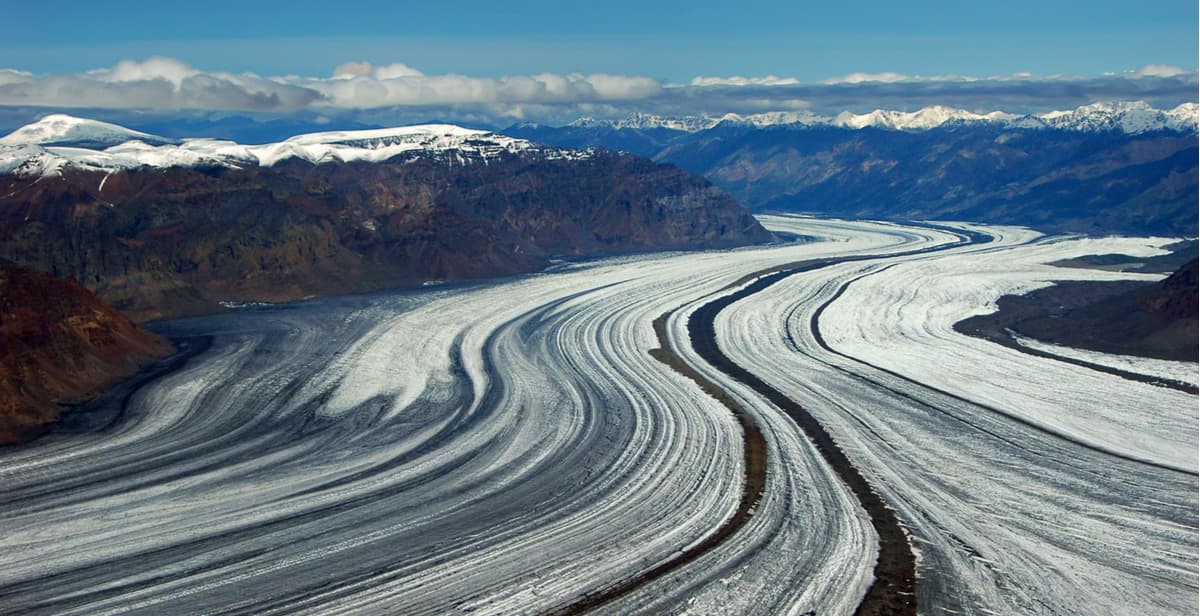 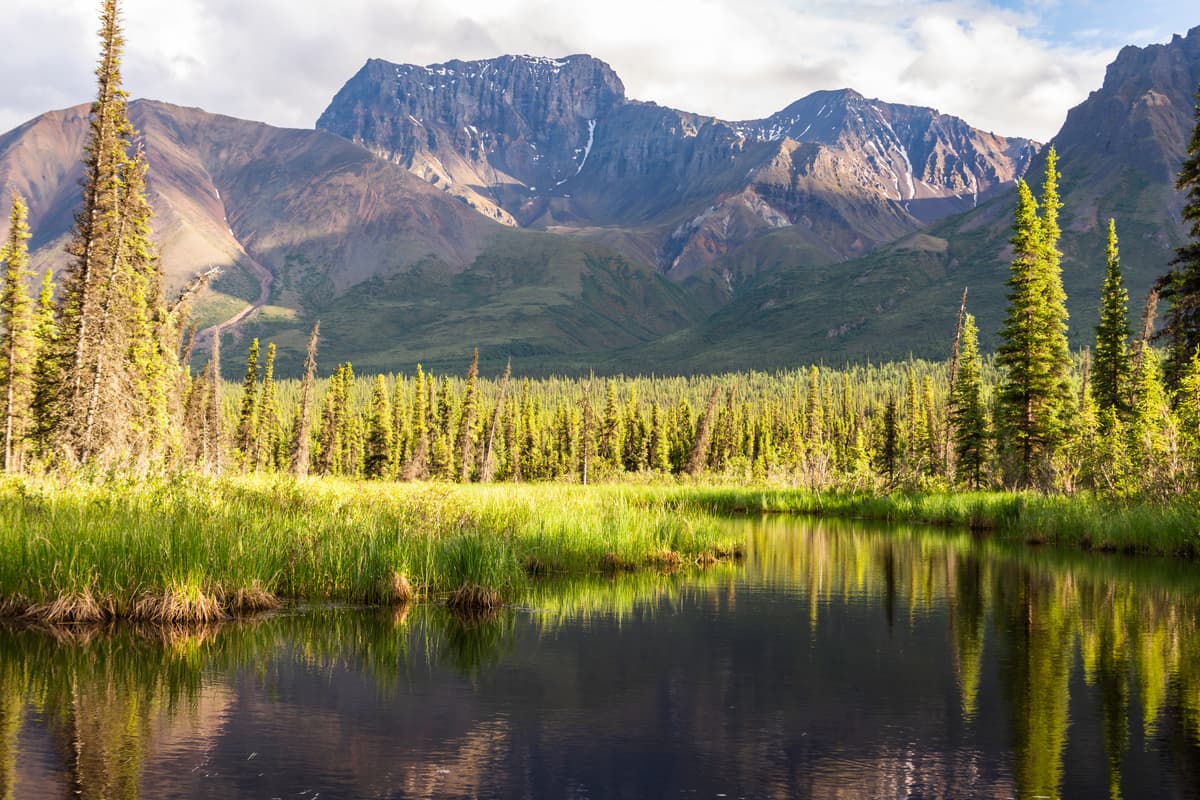 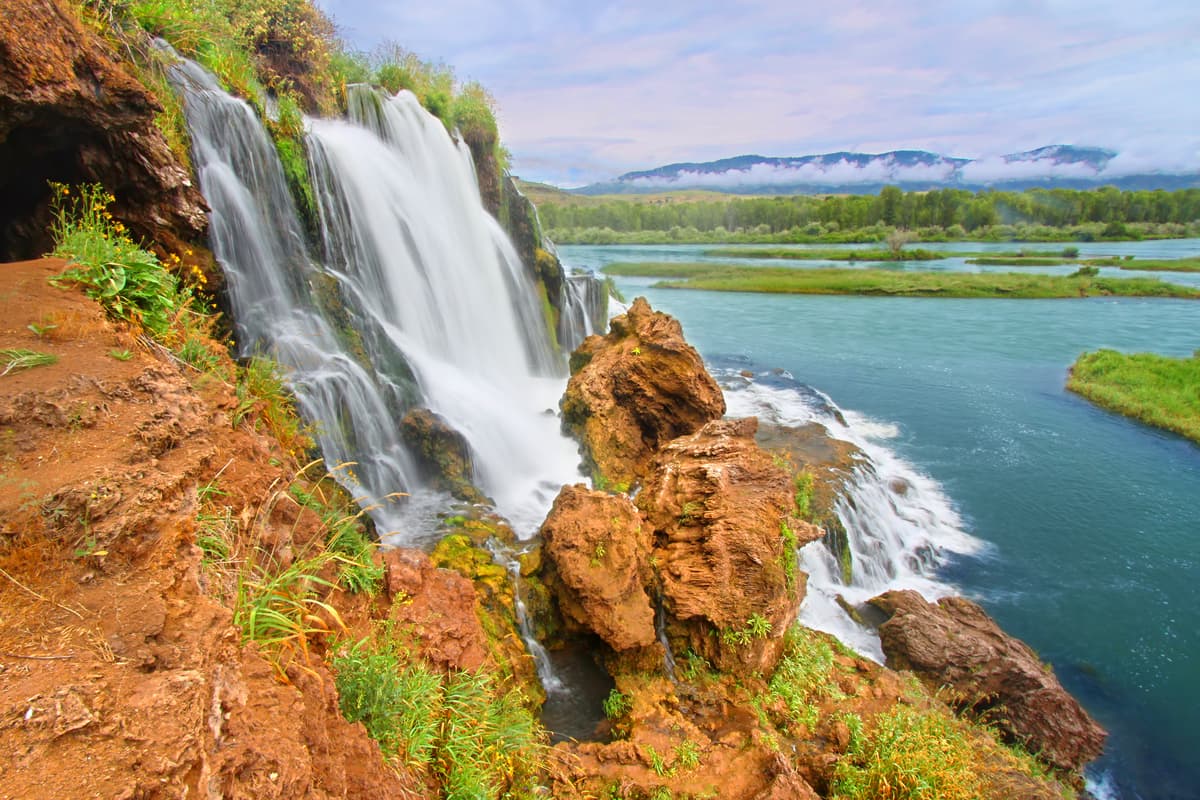 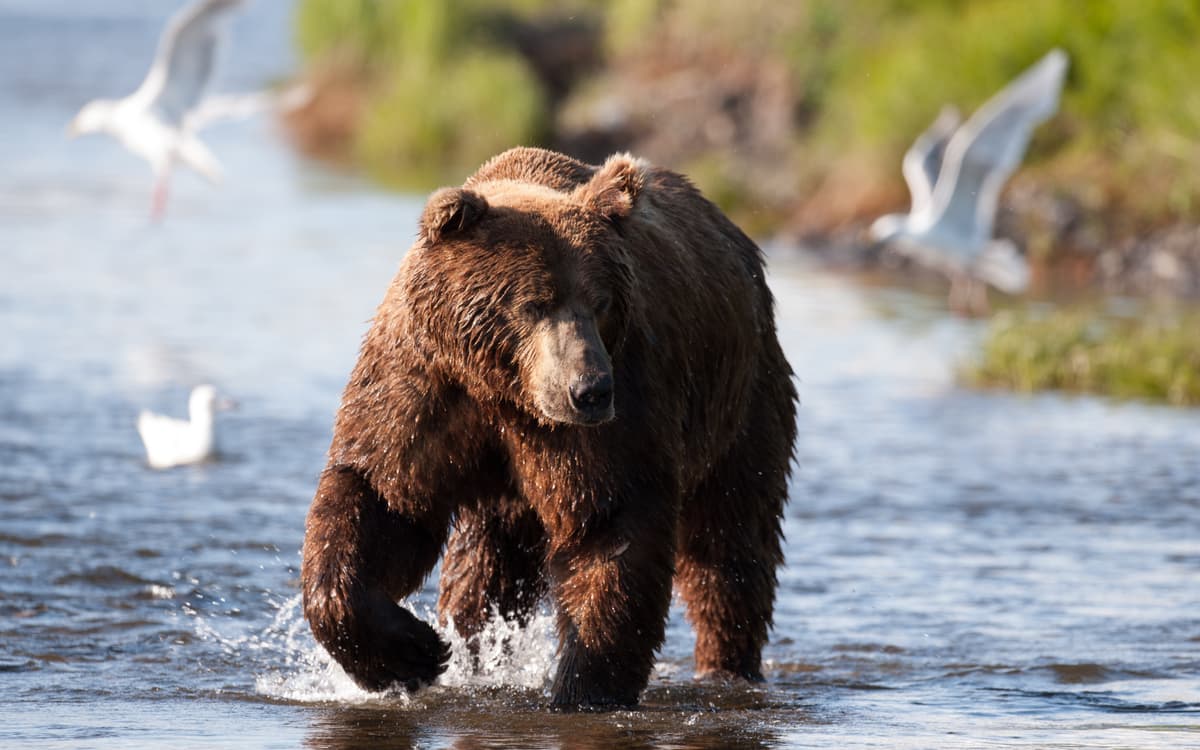 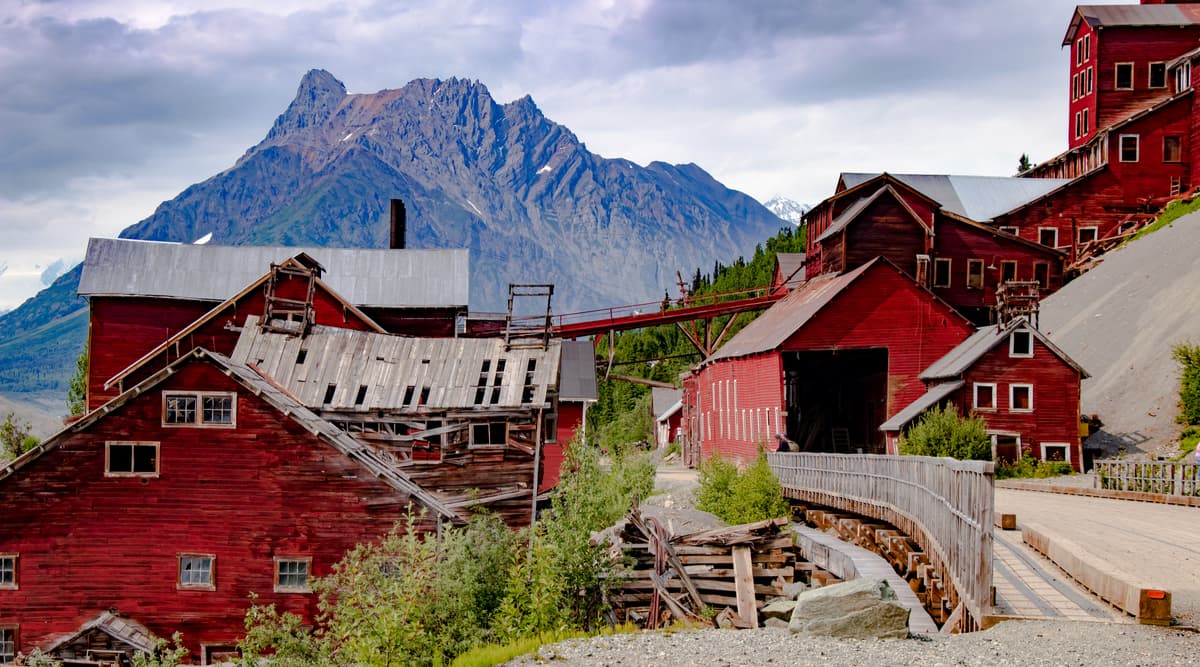