The Beaverfoot Range is part of the Kootenay Range in the Regional District of East Kootenay and the Columbia-Shuswap Regional District in southeastern British Columbia, Canada. The range follows Highway 95 southward from the town of Golden for about 50 km (30 mi), and contains 9 named peaks, the tallest and most prominent of which is Kapristo Mountain (2272m/ 8,930ft).

Columbia River near Golden, BC

The Beaverfoot Range is located within both the Regional District of East Kootenay and the Columbia-Shuswap Regional District in the southeastern part of the Canadian province of British Columbia. The town of Golden is located at the northern end of the range and Highway 95 runs parallel to the range for much of its 50 km (30 mi) length until the town of Harrogate.

The northern part of the Beaverfoot Range borders Yoho National Park while Bugaboo Provincial Park is located across the Rocky Mountain Trench to the west. The range is also located close to Glacier National Park and Kootenay National Park.

As a small subrange of the Canadian Rockies, the Beaverfoot Range is surrounded by other named subranges. This includes the Van Horne Range to the north, the Ottertail Range and the West Vermilion Range to the east, the Brisco Range to the south, and both the Selkirk Mountains and the Purcell Mountains of the Columbia Mountains system to the west.

The Beaverfoot Range and its sibling ranges, the Brisco Range and Stanford Range to the south are more or less a 160 km (100 mi) long mountain system that has been divided into three roughly equal sections. As siblings in the Kootenay Range of the Rocky Mountains, the Beaverfoot, Brisco, and Stanford ranges look similar and are of similar geological composition.

During that 40 million years, the tectonic plates from the west collided with the North American plate and caused the upheaval of slabs of limestone and shales. The layers of rock were compressed and deformed and raised high into the air to be subject to the erosive forces of wind, water, and glaciers that gave them the topography we see today.

At the end of the Laramide mountain building event, the fault at the western edge of the Canadian Rockies stopped compressing and began to expand. The Rocky Mountain Trench is the wide valley that separates the Rocky Mountains from the older Columbia Mountains to the west, where the fault expanded after the tectonic collision.

The younger layers of Cretaceous sandstones and shales were subject to heavy erosion which created the valleys between the limestone peaks. Layers of shale and sandstone are often visible along the lower slopes and in the valleys.

The ecology of the Beaverfoot Range is divided into alpine and subalpine ecological regions.

The flora of the alpine region of the range is stunted or naturally small. It usually consists of lichens growing on rocks and sedges and heath growing in protected outcroppings near summer snowfields. Occasional krummholz (stunted trees that tend to grow in clusters close to the ground) can be found on ledges, which provide shelter for communities of plants to grow.

Mountain goats and bighorn sheep spend part of their time amongst the alpine rocks; however, the most consistent inhabitants of the alpine are several bird species that nest in these regions. You may see white-tailed ptarmigan, American pipits, grey-crowned rosy finches, and horned larks nesting among the rocks.

The forests and meadows are home to many large animals, including elk, grizzly bears, black bears, deer, mountain goats, bighorn sheep, wolves, and cougars. Wet meadows and streamside shrubbery provide habitat to small mammals such as long-tailed vole, northern bog lemming, and heather vole. Marmots skirt the border between the subalpine and alpine and their screams always both delight and startle hikers in the region.

The Beaverfoot Range is part of the traditional territory of the Ktunaxa Nation, with speculation that the modern Ktunaxa are the descendants of the original inhabitants that immigrated to the area nearly 12,000 years ago.

There are no major cultural sites within the Beaverfoot Range; however, ancient seasonal hunting camps, quarries, and workshops have been discovered throughout the East Kootenay District. The primary collection of cultural sites that date back to the original inhabitants is referred to as the Goatfell Complex.

The original inhabitants of the region likely migrated north, into the valley as the glaciers were receding, about 12,000 years ago. They were large game hunters as there were previously giant bison, camels, large lion-like cats, and mammoths that roamed the valleys in the range. The people would also quarry chert from the peaks and slopes to use for weapons and tools because it would easily form useful sharp edges when broken properly.

David Thompson was the likely first European to encounter the Ktunaxa people when he arrived in 1807. Working for the North West Company, Thompson crossed the Rocky Mountains and traveled along the Blaeberry River to the future town site of Golden at the confluence of the Kicking Horse and Columbia rivers. He was searching for the Columbia River and passage to the Pacific Ocean.

The Palliser Expedition charted the route for the Canadian Pacific Railway from 1857–1860 and mapped the pass from Lake Louise, Alberta to Field, British Columbia.

The pass and river were named Kicking Horse after an incident in which Sir James Hector, a naturalist, geologist, and surgeon of the expedition, was kicked by his horse and was initially thought dead. Now the name of the pass and river stand as a reminder to tend horses carefully; however, the name of the river seems a fitting description of the wild white-water rapids.

As the railway was completed in 1885, the town of Golden at the north end of the range, had boomed as it was a supplier of lumber for railway ties, trestles, snow sheds, and buildings. Continuing with their tradition of importing tourists, like they did previously with Banff and Lake Louise, Canadian Pacific Railway hired Swiss mountain guides to come work out of Golden.

Edward Feuz Sr. and Christian Haesler were the first of 35 Swiss guides that were hired to work in the area from 1899 to 1954. In 1912, the Canadian Pacific Railway built Edelweiss Village, in Golden to house the guides and their families. The chalets in the region are currently maintained by descendants of the original guides. The Swiss guides recorded thousands of climbs over their tenure with zero known fatalities.

There is a lot to do in the Beaverfoot Range, especially if you’re an avid scrambler or mountain biker. The following are some of the popular activities and their locations.

Scrambling is an exciting way to explore mountain peaks; however, while it is less technical than mountaineering, it is more dangerous and requires more skill than hiking. Scrambling often requires use of hands for stabilizing yourself on steep terrain where you’ll need to do some non-technical climbing.

There are greater risks of slips and falls on rugged terrain and there is usually some degree of exposure to a long fall. Additionally, route finding, and map and compass skills are important, because the trails are usually unmaintained and overgrown. Scrambling is an exciting skill to be learned and practiced; however, stay within your limits of comfort and safety.

With the safety speech done now, there are many peaks in the Beaverfoot Range that can make for an off the beaten path adventure.

There are nine peaks in the Beaverfoot Range, and many of them can be scrambled, including the tallest peak, Kapristo Mountain (2,272 m/8,930 ft). Bicarbonate Peak, Coral Mountain, Castle Mountain, Tower Peak, Beaverhead Peak (Mount 7) are all peaks with recorded scrambles.

Located just south of Golden, Mount 7 (a.k.a. Beaverhead Peak) is the northernmost peak of the Beaverfoot Range. The recreation area that encompasses the peak offers a variety of outdoor activities.

The peak is easily accessible from Golden as a hike, and it is also the starting area for many fantastic downhill biking trails. Additionally, the peak is a popular launch pad for hang gliders and paragliders.

There are many trails that lead to and from the peak and they can be traveled year-round. Remember to pay attention to your surroundings, slow down around blind corners while cycling, and be courteous with others on the trails. We may use the trails in different ways, but we all deserve to enjoy them.

The Beaverfoot Range parallels the ancient travel corridor of the Columbia River and the modern Highway 95. There are many small towns along the range; however, few are more than a small collection of houses. The following are towns in the region where one can find lodging, provisions, and an opportunity to relax.

Golden, British Columbia is located at the north end of the Beaverfoot Range and is the largest town bordering the Beaverfoot Range. Built at the confluence of the Kicking Horse and Columbia Rivers, Golden started out as a forest outpost that provided lumber for the construction of the railway. Having seen the success of Lake Louise and Banff, after the railway was completed, Canadian Pacific Railway hired Swiss guides to attract tourists to the area.

There are innumerable mountain peaks, creeks, and rivers to explore around Golden. Once the Trans- Canada Highway was completed through Golden in the 1960s, Golden changed from a forest outpost to a thriving community. Logging and mining are still important parts of the economy; however, Golden has become a mountain bike hub in recent years.

Many people purchase second homes in Golden or visit frequently for the mountain biking experience. While mountain biking is incredibly popular in the area, there are still many opportunities for other activities such as hiking, rafting, climbing, and skiing. Rafting the Kicking Horse River is a wild experience, and the river name seems appropriate as you get bucked through the white water.

Radium Hot Springs is south of the Beaverfoot Range along Highway 95. The town borders Kootenay National Park where the hot springs were discovered and developed. Radium is a small town that caters to skiers in the winter and hikers and mountain bikers in the summer.

It has everything that one needs for their next adventure, including many trails from the edge of town. There are popular canyon trails to hike as well as the hot springs to relax in. Making Radium your basecamp also allows quick access to the many parks and mountains in the District of East Kootenay.

Kootenay National Park is located to the north and it is home to countless amazing trails. The Beaverfoot Range is to the north along Highway 95 with many tempting peaks. Just north of Radium is the hamlet Brisco, where you turn west off the highway and can head towards the internationally renowned granite spires of Bugaboo Provincial Park. 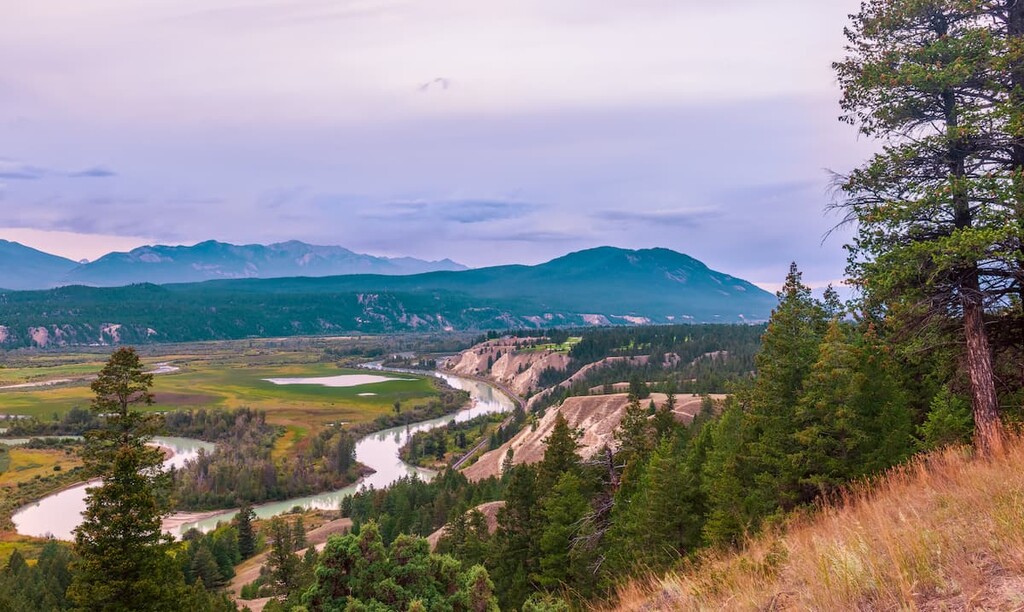 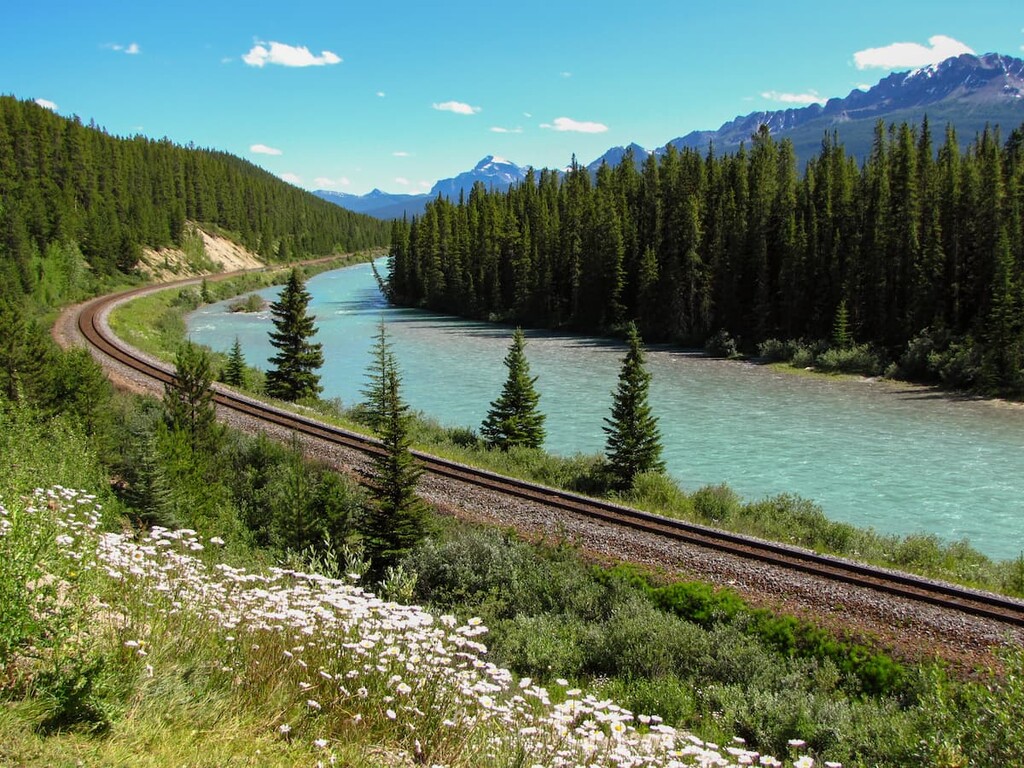 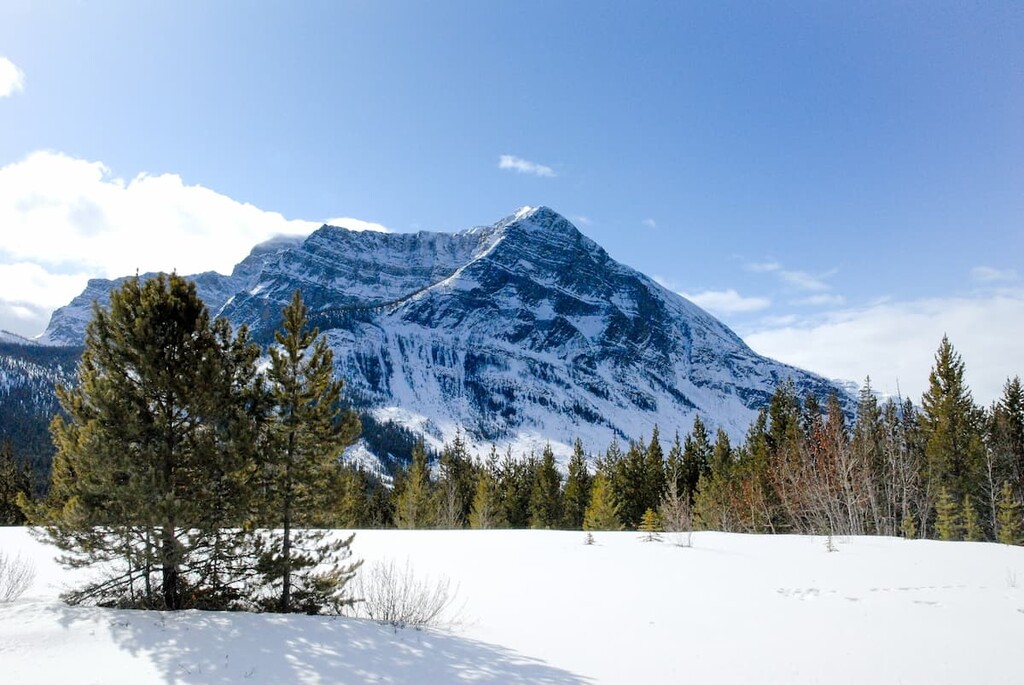 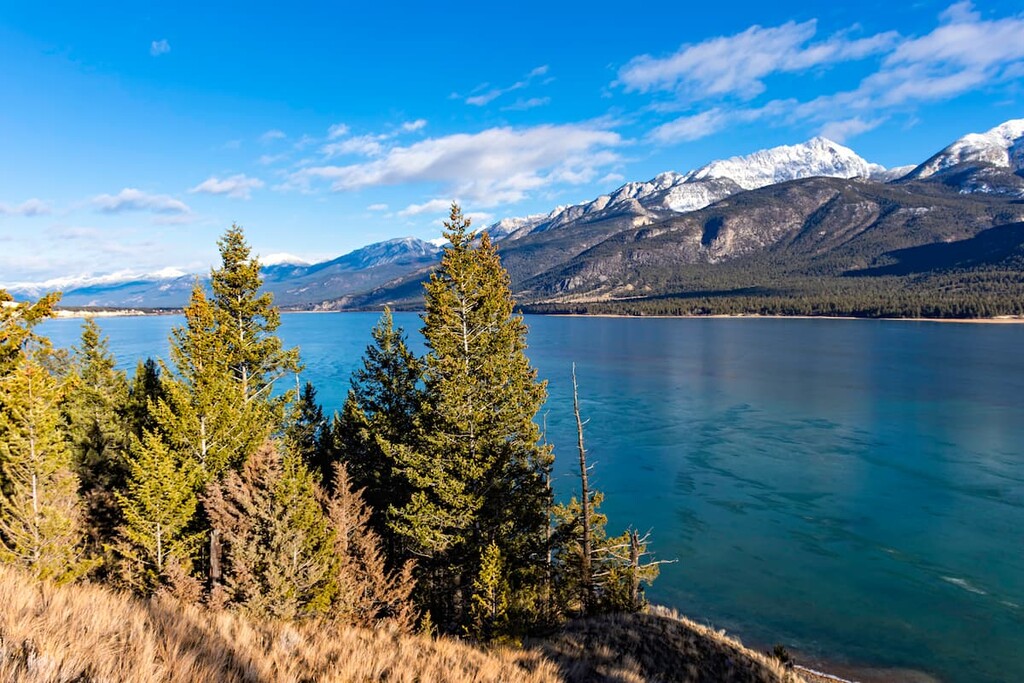 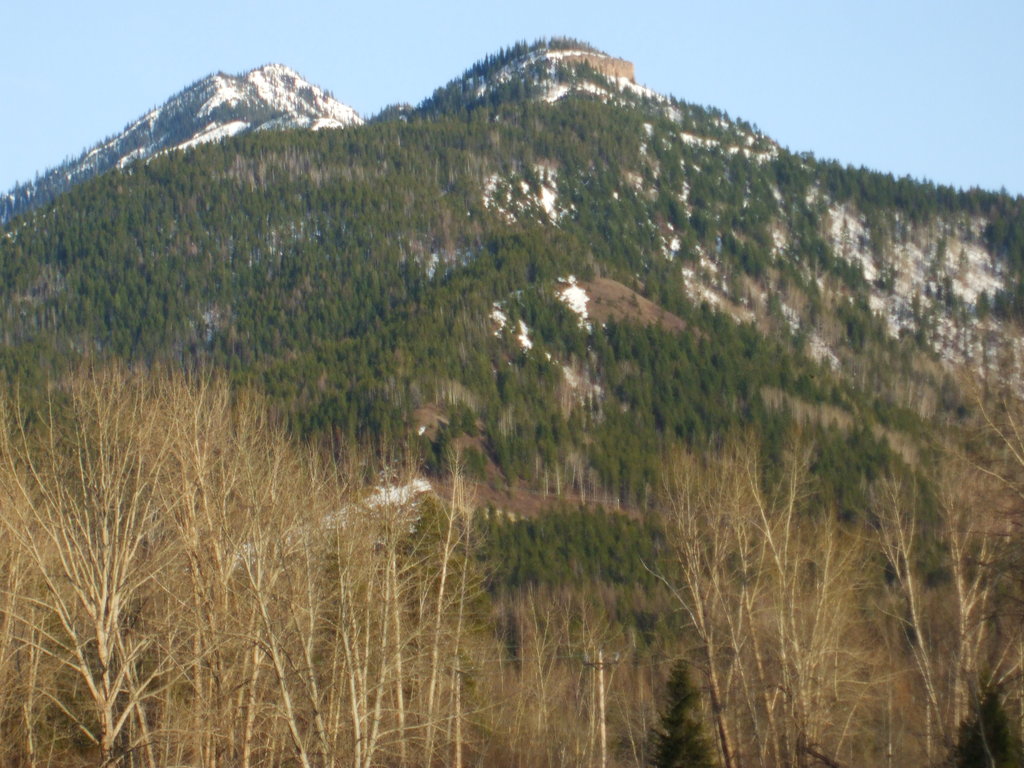