Monkman Provincial Park is located in northeastern British Columbia, Canada and it contains a number of peaks that are part of the Far Northern Rockies. There are 13 named peaks in the provincial park, of which Weaver Peak is the tallest and most prominent with 2,580 m (8,465 ft) of elevation and 1,281 m (4,203 ft) of prominence. 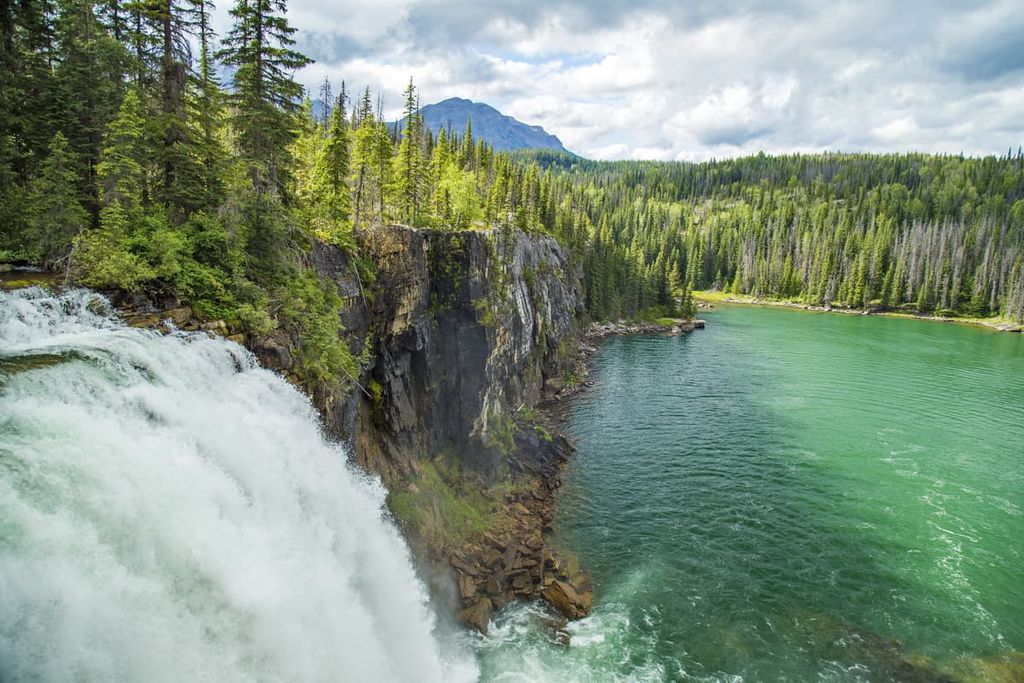 The park includes the headwaters of the Murray River, as well as the Pioneer Range, and south to the Limestone Lakes. It is located partly in the Peace River Regional District and in the Regional District of Fraser-Fort George.

Access to the park is via the community of Tumbler Ridge off of Highway 52. South of Tumbler Ridge, the Murray Forestry Service Road follows the Murray River into Monkman Provincial Park where there is a vehicle-accessible campground as well as trailheads that lead into the backcountry.

As part of the Rocky Mountains, the Hart Ranges, which are partly located inside Monkman Provincial Park, started forming about 75 million years ago as tectonic plates under the Pacific Ocean subducted under the North American Plate.

The Rockies took about 35 million years to form, during which time massive layers of Paleozoic limestone were thrust up and over the younger Cretaceous layers to the northeast.

An interesting geological feature of Monkman Provincial Park is that the Murray River tumbles 60 m (197 ft) over a geological fault, creating the magnificent Kinuseo Falls. Kinuseo Falls are slightly taller than Niagara Falls; however, Niagara Falls has a significantly larger volume of water.

Monkman Provincial Park has a varied and rich diversity of ecosystems and habitats. From the banks along the Murray River and the shores of the many lakes in the park, up through the valleys and forested slopes, to the barren and rocky alpine peaks there is a variety of plants and animal species that call the area home.

The entrance to Monkman Provincial Park is through the Murray River Valley. The valley is part of the Sub-Boreal Spruce Zone, which is characterized by forests of subalpine fir, hybrid white spruce, the occasional black spruce, and lodgepole pine.

The combination of trees in this region creates a highly productive forest with a distinctive understory which includes lilies, ferns, blueberries, and Devil’s club. Trembling aspen, birch, and black cottonwood usually appear around creeks and rivers in this zone, too.

The mountain peaks in the park are part of the Boreal Altai Fescue Alpine zone. Here, the ground is typically barren with small communities of grasses, usually Altai fescue or small-awned sedge. Coming down from the alpine, the trees transition from scattered stands to a dense forest at lower elevations.

Aside from the small areas of sub-boreal forest and alpine found in the region, most of Monkman Provincial Park is part of the Engelmann Spruce – Subalpine Fir Zone. This is the typical subalpine ecology at the high elevations across British Columbia. The long and cold winters of the region dictate that only hardy trees and other vegetation can survive the winter in this zone.

Additionally, from the alpine to the forests and river valleys, the park has a large variety of wildlife.

Mountain goats inhabit the alpine as do marmots and Columbian ground squirrels. Black bear, and grizzly bears inhabit the park, too. Other notable species include the bighorn sheep, Rocky Mountain elk, white-tail deer, and stone sheep; however, these animals tend to migrate to lower elevations to escape the deep snowpack during the winter.

Mountain goats, moose, and caribou have adapted to spend the winters among the deep snow that is common in the Engelmann Spruce – Subalpine Fir Zone of Monkman Provincial Park. The conifer forests are also inhabited by marten, fisher, and wolverine.

There are many birds that inhabit the forests as well, such as the gray jay, red crossbill, pine siskin, and Clark’s nutcracker. Golden eagles make their nests on south facing cliffs, which serve as the perfect place to hunt marmots and ground squirrels.

Monkman Provincial Park is part of the traditional territory of the Métis Nation of British Columbia and the Carrier and Denéndeh First Nations. Oral history has passed on information regarding the area, including plants known by elders to have medicinal properties. There are burial sites, vision quest sites, as well as a notable historic trading route that would later be named Monkman Pass in what is now Monkman provincial Park.

The first written reference to the area and some of its major features wasn’t made until Robert W. Jones compiled a map of the region in 1906 for the Grand Trunk Pacific Railway. The map noted the 60 m (197 ft) falls that disrupt the Murray River at the north end of the park. It wasn’t until 1915 that Kinuseo Falls was formally proposed as a name, which means “fish” in a Cree language.

In 1922, Alex Monkman, of the Métis Nation, was exploring the Rocky Mountains searching for tungsten. While prospecting, Monkman discovered a pass that would later be named in his honor. While the pass was already well-known to the First Nations and Métis of the area, Monkman established the pass for use as a trade route from northern Alberta and British Columbia to the Pacific Ocean.

Monkman’s route would have taken 1,600 km (1,000 mi) off the total distance traveled at the time through Peace River, Edmonton, or Calgary. However, the Yellowhead Pass was chosen for the route despite claims from engineers that the Monkman Pass would be easier to traverse.

By 1936, transportation costs were rising for farmers, so Monkman suggested they build a highway themselves through Monkman Pass to reduce their costs. Fundraisers were held and volunteers toiled for the next three years, crossing the Alberta-British Columbia border, and reaching Kinuseo Falls where a fishing lodge was built.

Despite their efforts, the start of the Second World War brought an end to Monkman’s highway-building ambitions, as he died in 1941. The highway was never completed; however, the Monkman Pass Memorial Trail commemorates the efforts of Alex Monkman and follows the old road and trail through Monkman Pass.

Monkman Provincial Park has stunning natural beauty with some special features, such as Kinuseo Falls, the Stone Corral, and a rock wall embedded with abundant marine fossils. While there are only a few trails in the park, there is a lot to see. The following are the major trails and attractions of Monkman Provincial Park.

Kinuseo Falls is one of the top attractions in Monkman Provincial parks. There are walking trails leading to the falls that vary in length from 0.5 km (0.3 mi) to 4 km (2.4 mi).

You can choose the shortest hike to see the stunning 60 m (197 ft) Kinuseo Falls or you can continue along and follow that trail across the top of the ridge for an even better view of the falls. There are interpretive signs along the way and an interpretive brochure is available for visitors so you can learn more about the falls and the surrounding area.

The Monkman Cascades are a series of 10 waterfalls along the Murray River downstream from Monkman Lake. The falls are all stunningly beautiful. The trail to the falls begins off the Monkman Lake Trail and the trek is about 50 km (30 mi) round-trip. It generally takes 3–4 days to make the hike and explore the falls.

There are several backcountry campsites along the trail, such as Devil’s Creek Camp and Cascades Camp, which are near the cascades. There is also the Monkman Lake Camp at the end of the maintained trail. The hike is considered difficult; however, the quantity and size of the cascades in the region make it a worthwhile adventure.

This 4 km (2.4 mi) interpretive trail includes ponds, falls, and caves with stalactites, moonsmilk, and other limestone formations. The trail takes about two hours to hike, but note that you may want to take flashlights to explore the caves.

The hike is a difficult 63 km (38 mi) one-way trail that takes 5 to 6 days to complete. The trail generally follows the original route to the pass; however, there are some deviations that lead into subalpine meadows with a series of tarns.

The trail terminus is Hobi’s Cabin, which is located at the confluence of Fontiniko and Herrick Creeks and is only accessible by boat. The trek is an incredible way to experience the historical trails of the region.

Monkman Provincial Park is a remote wilderness park that features beautiful wilderness trails as well as incredible natural features such as the Stone Corral, Kinuseo Falls, and the Monkman Cascades. While travelling to and from the park, the following are several places to get needed supplies or rest in a comfortable hotel before or after your adventure.

Located at the junction of Highways 16 and 97, Prince George is considered the capital of northern British Columbia. It was originally founded as Fort George, a North West Company trading post established by Simon Fraser in 1807. It is located about 500 km (300 mi) to the southwest of Monkman Provincial Park.

Prince George is situated at the confluence of the Nechako and Fraser Rivers. Since its founding, it has grown into an important transportation and service hub for the north of British Columbia with all the amenities of a modern city. It features fine dining restaurants, cinemas, museums, a range of accommodations and an international airport.

Off-roading is a popular pastime of locals in the region and there are well established clubs and areas to practice motocross and drive OHVs. The area also has vast wilderness areas that local hiking groups flock to as well as opportunities for fishing and other outdoor recreation.

Some of the most popular hikes around the city are Cottonwoods Island Loop, the Greenway Trail to Shane Lake Loop, McMillan Creek Loop, Troll Lake, Kakwa Lake Trail, and Forests for the World Lookout.

Located about 200 km (120 mi) to the northeast of Monkman Provincial Park, Dawson Creek was founded in the early twentieth century. It is considered to be a gateway city to Alaska and the northern wilderness of Canada. Settlers of European descent originally came to the region for the homestead grants that were being offered by the government of Canada.

As railways were built through the town, it grew and attracted more businesses and settlers. During the twentieth century, Dawson Creek saw some excitement as the United States used the city as a terminus for the Alaska Highway, making Dawson Creek Mile 0.

The area surrounding Dawson Creek has beautiful wilderness areas that are great for hiking, skiing, and OHV use. In addition to wilderness access, the city has an art gallery, a historical village, a museum, as well as annual fall fairs and a rodeo.

Situated about 250 km (180 mi) northwest of Monkman Provincial Park, Mackenzie is located on the west side of the Hart Ranges off Highway 39, along the shore of Williston Lake. The municipality of Mackenzie is a great place for winter loving outdoor enthusiasts, where they host dog sledding, cross country skiing, and snowmobiling competitions. 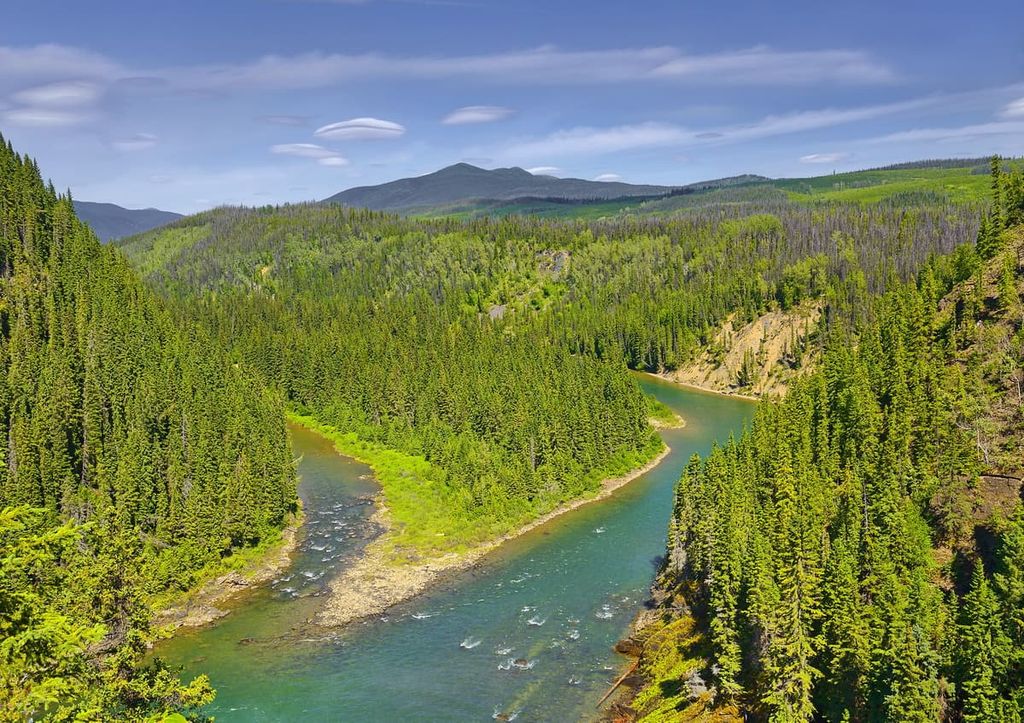 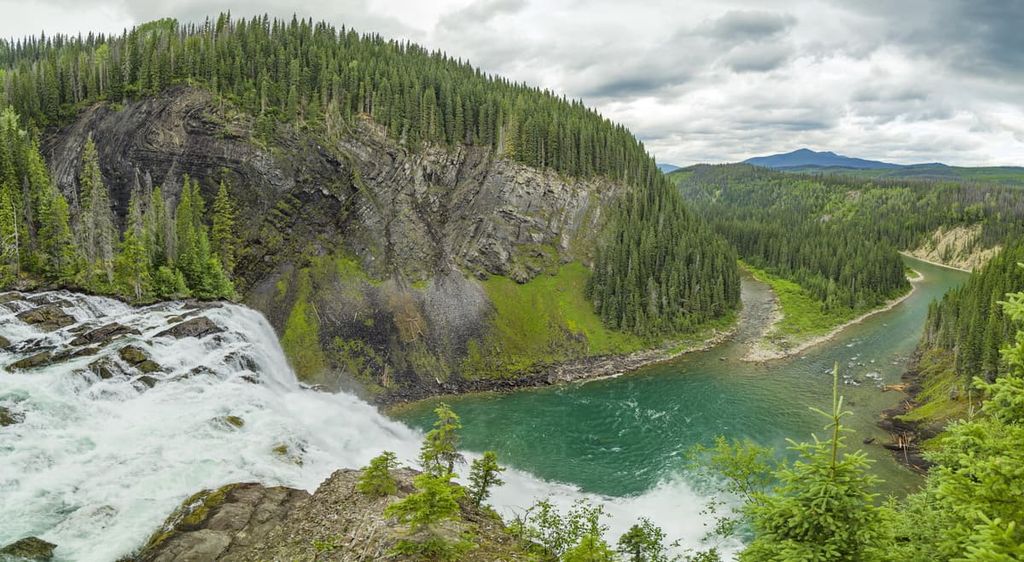 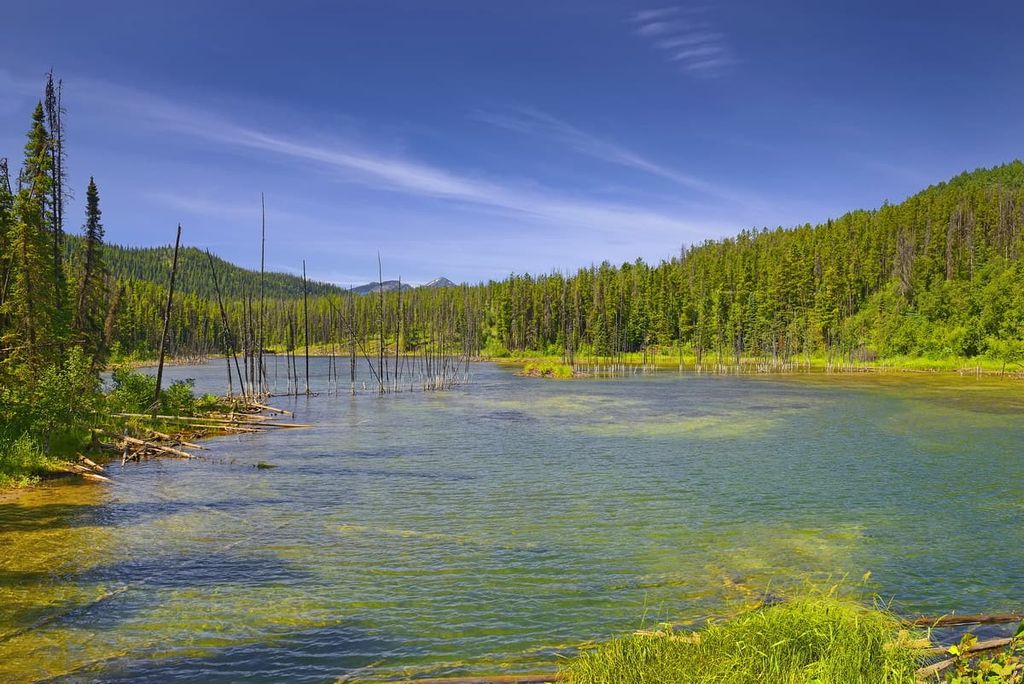 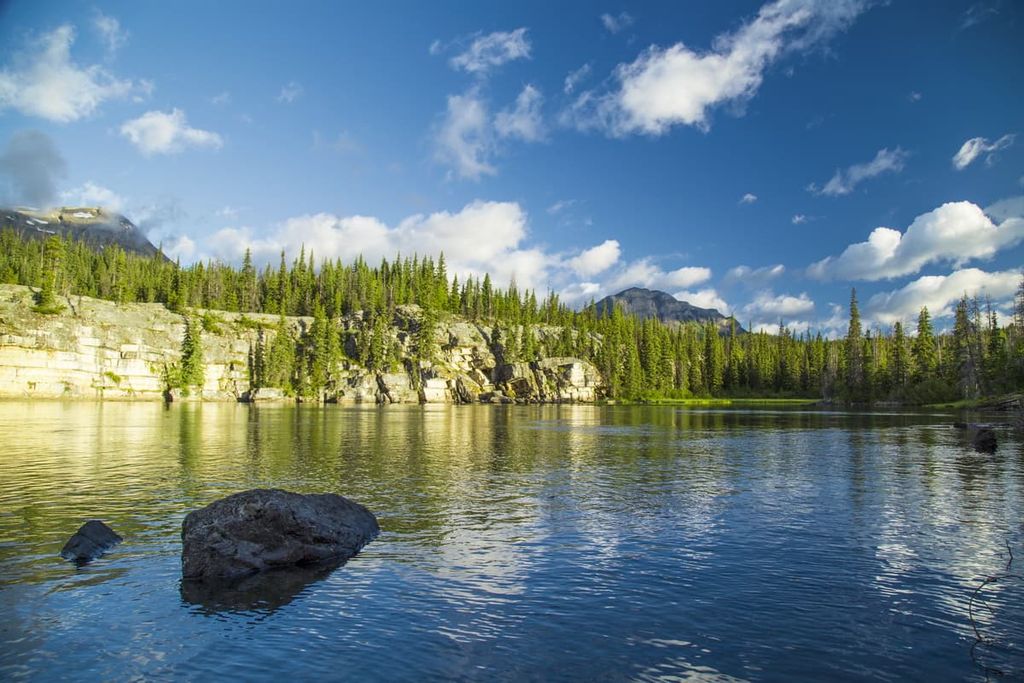 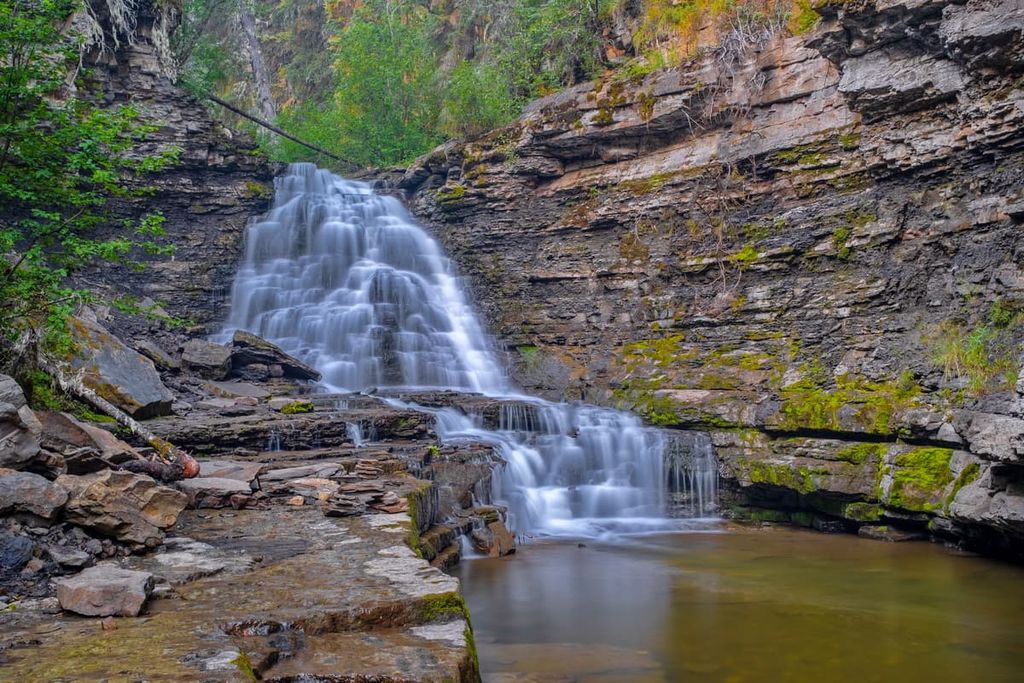