Arctic Pacific Lakes Provincial Park is a protected area that straddles the Continental Divide in northern British Columbia, Canada. The park is located within the Misinchinka Ranges of the Far Northern Rockies. Additionally, the park’s main feature is a chain of three lakes, two of which flow into the Pacific Ocean and one of which flows into the Arctic Ocean. Mount Kenchuse (1,828 m/5,997 ft) is the tallest and most prominent peak in the park. 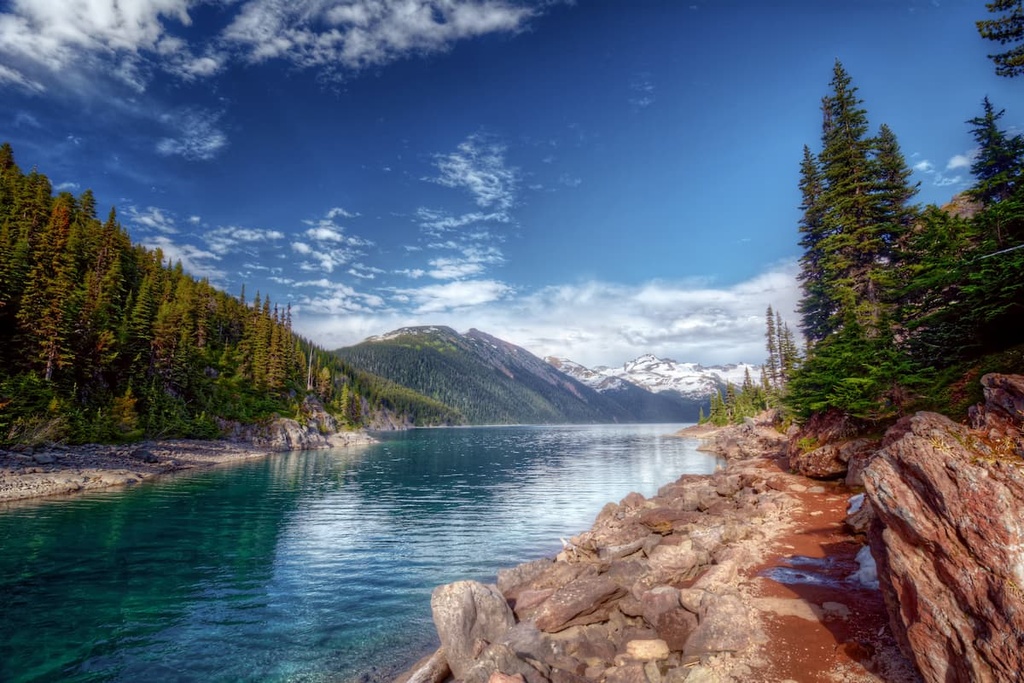 Located in the far Northern Rockies of British Columbia, Canada, Arctic Pacific Lakes Provincial Park encompasses 138 square kilometers (58 square miles) of land along the Continental Divide. Of the three small lakes in the park, two flow into the Pacific Ocean and the third flows into the Arctic Ocean.

Arctic Pacific Lakes Provincial Park is located in the far northern Rockies of British Columbia. The Rocky Mountains started forming about 75 million years ago, during a mountain building event called the Laramide orogeny, which lasted about 45 million years.

During the Laramide orogeny, the Farallon plate, which was one of the tectonic plates under the Pacific Ocean, collided with North America. It slowly slipped underneath the continent in a process called subduction.

As the tectonic plate subducted, it also compressed the previous continental margin, which falls roughly along the border of British Columbia and Alberta. The compression of the continent caused the layers of Paleozoic limestone to fold, buckle, and ultimately crack and thrust upward, toward the east and over the younger Cretaceous sandstones and shales.

The cracking along the fault lines and subsequent stacking of the thrusted layers of rock are what created the Rocky Mountains. However, while the Rockies are typically made of limestone peaks, the mountains of Arctic Pacific Lakes are part of the Misinchinka Ranges, which are different from the rest of the Canadian Rockies.

The Misinchinka Ranges, which are a subrange of the Hart Ranges of the far northern Rockies, primarily consist of Misinchinka schist. Schist is a metamorphic rock derived from shale, granitic and other volcanic rocks. It is considerably softer than the limestone that is typical in the Rockies.

As it is made of a softer stone, the mountains of the Misinchinka Ranges have a more subdued and rounded topography than the other ranges on the Rockies. The subdued topography is a result of the fact that schist is much more easily weathered than the rocks in the jagged peaks that are found in the ranges to the east and the south.

Due to the characteristics of the rocks of the Misinchinka Ranges and the fact that the region is part of a major topographical depression, most of the peaks in the Minsinchinka Ranges are less than 2,130 m (7,000 ft) tall.

During the Pleistocene, the Cordilleran ice sheet stood between 1,830 m (6,000 ft) and 2,130 m (7,000 ft) high. It certainly overrode the peaks of the Misinchinka Ranges and those of Arctic Pacific Lakes Provincial Park. During this time, the ice sheet rounded the tops of the park’s peaks, though the park was not significantly affected by cirque and valley glaciers.

The unique chain of lakes in the park are home to many fish species, including lake trout, bull trout, rainbow trout, redside shiner, lake char, kokanee, Dolly Varden, mountain whitefish, and chinook salmon. Arctic Grayling is found in Arctic Lake, but not in Pacific and Portage Lakes.

The park protects important grizzly bear and caribou habitat, and is home to many other animals such as cougars, wolves, deer, and foxes. While the forest abounds with a variety of animals, the wetlands, which are found in the valley bottoms and alongside the lakes, are also home to many species of birds as well as small mammals.

The park is in the traditional territory of the Lheidli T’enneh First Nation. Archaeological evidence and cultural knowledge suggests that humans started living in the area around what is now Arctic Pacific Lakes Provincial Park about 9,000 years ago.

Arctic Pacific Lakes Provincial Park contains part of the First Nations trail used by Alexander Mackenzie during his first crossing of the continent in 1793. Simon Fraser arrived in the area in the early nineteenth century as he navigated his way toward the Pacific.

The pass between the Arctic and Pacific Lakes has long been known to local First Nations; however, it also became an important route through the Rocky Mountains for European fur traders. Additionally, fur traders became very reliant on local First Nations to supply them with labour and food.

There are many archaeological sites that have been discovered around Arctic Lake. The area is currently used by local First Nations for berry picking, hunting, and fishing. But, there are currently no permanent settlements or other facilities in the park.

Arctic Pacific Lakes Provincial Park is located along the Continental Divide. The three beautiful turquoise lakes of the park are set amidst the backdrop of alpine peaks and ridges.

The primary activity in the park is paddling the lakes to view the beautiful forests, distant mountain peaks, the extensive avalanche chutes, and small waterfalls. The only official trail in the park is the historic Portage Trail between Arctic and Pacific Lakes. Otherwise, the terrain is very rugged.

Primary access to the park is by boat, which is the main way to travel within the park. Random wilderness camping is permitted throughout the park, too. Visitors are reminded to abide by Leave No Trace principles and to take caution because the area is prime grizzly bear habitat.

Arctic Pacific Lakes Provincial Park is a remote wilderness park in the heart of the Far Northern Rockies. The following are the largest communities around the park:

Prince George is considered to be the capital of northern British Columbia. It is located about 200 km (120 mi) from Arctic Pacific Lakes Provincial Park. The city is located on the western side of the Regional District of Fraser-Fort George at the junction of Highways 16 and 97.

Situated at the confluence of the Fraser and Stuart Rivers, the city was originally founded as Fort George, a North West Company trading post established by Simon Fraser in 1807. Prince George has grown into an important transportation and service hub for the north of British Columbia with all the amenities of a modern city.

Some of the most popular hikes around the city are the Cottonwoods Island Loop, the Greenway Trail to Shane Lake Loop, McMillan Creek Loop, Troll Lake, Kakwa Lake Trail, and Forests for the World Lookout. Additionally, the city is located near several beautiful wilderness areas such as the Sugarbowl-Grizzly Den and Stuart River Provincial Parks.

Additionally, there are many hiking trails near Mackenzie that are worth checking out if you’re in the area. Some of the recommended trails are the Morfee Lake Trails, Cut Thumb Falls, and the Kimta Creek Trail. 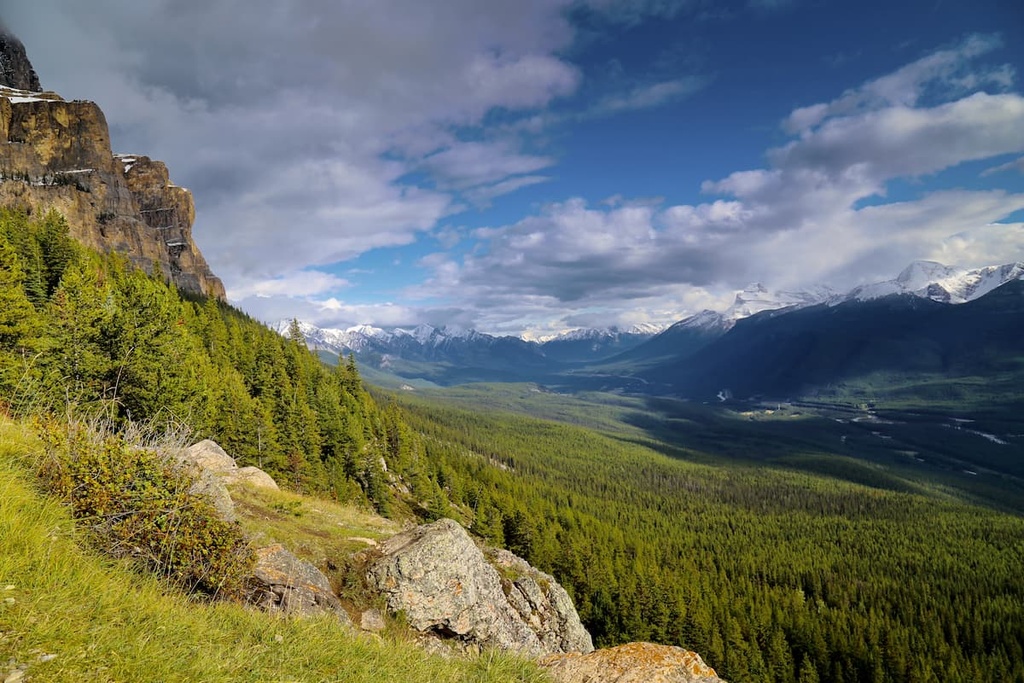