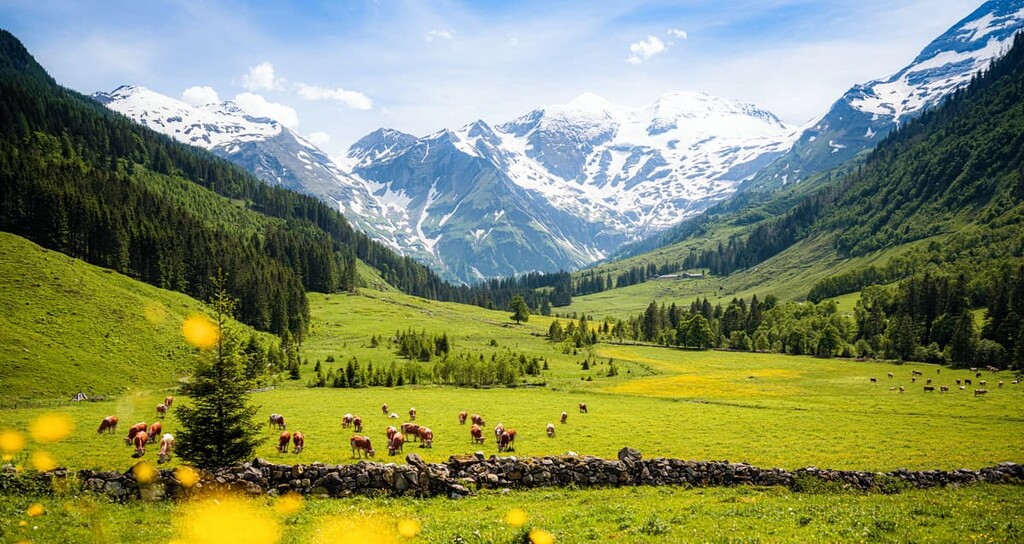 High Tauern National Park is located in the Austrian states of Salzburg, Carinthia, and Tyrol. Mittersill, Zell am See, Lienz, and Spittal an der Drau, are the closest notable cities to the park.

Due to its location and sheer size, High Tauern national park is relatively close to some other magnificent sights and national parks, such as:

The High Tauern mountain ranges are part of the Alps. The most significant mountain groups of High Tauern National Park include:

The peaks of the High Tauern were formed over the course of millions of years as the African tectonic plate drifted towards the Eurasian plate, creating the peaks that we now know as the Alps.

However, High Tauern is not only a beautiful region with many impressive mountains; it is also the site of a unique geological feature, namely the Tauern Fenster (Tauern Window).

A geological 'Fenster' or 'window' is not a literal window but rather a geological structure formed over time by erosion of the upper rock layers, bearing what is underneath. The Tauern window was created by the collision of the aforementioned tectonic plates, which caused rock to be pushed upward above the Earth’s surface. The Tauern Fenster enables us to see a piece of Earth's history with our own eyes.

The astonishing thing about the 'window' is that it allows visitors to see rock strata that are usually found in the deep layers of the Earth. These peaks (such as Grossvenediger) were formed from liquid magma, which created the vast gneiss cores that we see at the center of the window today.

In the park, the primary rock types are gneiss, tonalite, granite, schists, limestones, and dolomite.

High Tauern National Park is a remarkably biodiverse place. For example, it is home to more than 3,500 plant species and between 10,000 and 20,000 animal species.

Edelweiss, the glacier buttercup, Rodolph's saxifrage, alpenrose, and Gentiana are the park's most noteworthy and famous flowers.

The white edelweiss flower originated in central Asia before it made its way to the Alps. It even grows in rock crevices and is one of the most commonly known Alpine flowers. Meanwhile, the glacier buttercup is a unique flower because it has sturdy stems that help keep small rocks on steep mountain slopes.

Gentiana is a blue flower that is also very well known in the Alps. There are many different kinds of Gentiana, and the stems are often used to make delicious schnapps in many Alpine regions. Rodolph's saxifrage flowers are red, and the alpenrose flowers are pink, making for a very colorful national park.

The park is also home to a large selection of animals! Of the more than 10,000 estimated species found in the park, some of the most significant inhabitants of region include:

High Tauern National Park was founded in 1971, making it Austria's first national park. It is home to Austria's highest and most famous mountain, Grossglockner (3,798 m/12,460 ft).

The park was formed when three Austrian states, Salzburg, Carinthia, and Tyrol, agreed to create a protected national park, but this was only the start of a long process. In 1981, Carinthia was the first of the three states to legally recognize the area as a national park. Salzburg and Tyrol followed in 1984 and 1992, respectively.

The IUCN (International Union for Conservation of Nature) only officially recognized the national park in 2001 in Carinthia and in both Salzburg and Tyrol in 2006.

The history of the High Tauern area started long before it became a national park.

In particular, the towns of Heiligenblut am Grossglockner and Bad Gastein are historically interesting.

Heiligenblut, which translates from German to 'holy blood,' was an essential region for the gold mining industry until the twentieth century. Besides mining, forestry and agriculture were the main economic forces here.

The place was named after a legend about the holy blood of Christ. According to this legend, a Danish prince named Briccius, who carried a bottle of the blood of Christ, was buried by an avalanche here in the year 914 CE when he was on his way back home. He planted the bottle inside his leg to protect it from thieves.

Legend has it that farmers tried to properly bury him when they found the body, but one of his legs refused to come up from underneath the ground. After further investigation, the bottle, which is said to contain the blood, was found and has since been kept in a church in Heiligenblut.

In the twentieth century, the small area developed from an agricultural and mining town into a place for summer holidays and recreation, which it remains until this day.

For example, take Bad Gastein, which is now a popular skiing and hiking area. The year 2020 marks 1000 years since Bad Gastein was first mentioned in written text as Provincia Gastuna.

The first evidence of human civilization in Gastein is dated back to 3750 BCE, long before Gastein was ever written about. Evidence of a later Roman settlement can be found in traces of old Roman roads and coins. In the eighth century, larger-scale farming started to develop in the valley.

The history of the therapeutic use of thermal water in Gastein (which it is now famous for) is long and began before it was first used in a thermal spa set up in 1350. Important figures like archbishops and later dukes and duchesses knew of these benefits and enjoyed it early on in the region’s history, too.

High Tauern National Park is a hiker’s and climber’s paradise. There are countless trails and peaks for hikers and climbers of all skill levels to enjoy in the park, as well as numerous schutzhütten (shelter huts) for visitors to check out. The opportunities here are endless as they include everything from week-long trekking tours to hikes that only take a few hours.

Here's a quick overview of some of the most popular hikes in the park:

Hochalmspitze, one of the most prominent peaks in the park, is also known as the Queen of the Alps. The hike to the summit is challenging and requires a high level of skill and experience in technical terrain.

Sonnblick via Fleisstal is a challenging ski tour that requires a good level of fitness, experience, and skill due to its length of 13.6 km (84 mi) and its elevation gain of 1,600 m. The estimated duration of this ski tour is 6 hours.

Skiers can choose from four different routes up to the peak, including from Rauris Valley, Zirknitz Valley, Moelltaler Glacier, or Heiligenblut. Sonnblick is also home to the highest weather station in all of Austria.

This ascent is relatively tricky and requires technical climbing close to the peak. This climb takes typically about 4.5 hours to complete. It is approximately 6.4 km (40 mi) long, and it involves 750 m (2,460 ft) of elevation gain.

The trek to Glocknerhaus onto Spielmann is less challenging than others in the High Tauern region, but it is demanding nonetheless. A good level of fitness is required for most paths in this region.

The hike leads through the Glockner and Granatspitz groups and offers breathtaking views. For less experienced hikers, a guide is highly recommended along the Glockner Runde.

The beautiful Krimmler Waterfall Stage Three hike takes around 2.5 hours to complete and mainly leads along well-marked paths. It is suitable for hikers of most experience levels.

This hike gains about 410 m (1,345 ft) elevation and is about 7.6 km (47 mi) long. Along the way, you'll get close to the region's magnificent waterfalls, which are one of the highlights of the national park.

High Tauern National Park is one of the most magnificent places in Europe. The largest national park in the Alps boasts more than just a few sights and activities. In fact, it is a true hiker and nature lover's paradise!

Here are some of the most noteworthy things to see and experience in the park.

The 48 km (30 mi) long Grossglockner High Alpine Road leads through the alpine landscape of High Tauern National Park. It gives you great views of green meadows, trees, past waterfalls, the rocky alpine region as it takes you to the road's highest point, Edelweissspitze, at 2,500 m (8,202 ft).

On top, a magnificent view of the park's most impressive mountains awaits. The Grossglockner is the highest of them all, and it is easy to see from this viewpoint. The view from Edelweissspitze is unique, but the whole road is a breathtaking experience in itself.

The Krimmler Waterfalls are the largest in Austria and some of the biggest in Europe. They feature three levels, and they have a total height of over 380 m (1,246 ft), making for an impressive natural spectacle. You can see the waterfalls by hiking along a short trail.

At Wildlife Park Ferleiten​​, you can see and learn about over 200 animals from the Alps and worldwide. The park is home to bears, wolves, and many more animals to admire.

If you wish, you can sign up for a guided tour of the park.

The Gipfelwelt 3000 is a popular destination located on the Kitzsteinhorn. The Kitzsteinhorn offers skiers an opportunity to ski almost all year around. But this impressive mountain is worth a visit at any time of year.

You can take a cable car from Kaprun to Gipfelwelt 3000 and enjoy an experience usually reserved for experienced alpinists. An impressive view, an ice arena, a restaurant, and much more await at Gipfelwelt 300.

There are numerous towns located all around and close to High Tauern National Park, all of which offer many things to see and do. One of the easiest ways to get to the national park is by plane. You can fly into Salzburg Airport or Zell is See and then drive to the national park.

Here's a quick look at some of the best nearby cities and towns to check out during your visit to the region:

Salzburg's beautiful and historic city is known by music and culture lovers worldwide. As the birthplace of Mozart and home to the Salzburg Music Festival, Salzburg has a lot to offer for visitors with a wide variety of interests.

Salzburg is home to beautiful lakes, mountains, and an excellent town center, making it a worthwhile place to visit all year round. The city is also home to many hotels and restaurants to suit any budget.

Bad Hofgastein is a town located in St. Johann in a rural part of the state of Salzburg. It has around 7,000 residents, and it is known for its winter sports, hiking, and wellness opportunities. It has recently gained attention because it is now home to the Adidas Infinite Trails Race,

This beautiful small town offers many excellent restaurants and hotels. If you get the chance, be sure to stop by one of Bad Hofgastein's many wellness resorts, too. You won't be disappointed!

Zell am See is a small community that's a little bigger than Bad Hofgastein, with just over 10,000 inhabitants. It is a favorite among tourists from all around the world.

The town center of Zell am See is fantastic, as there are many great restaurants and bars to check out. It is bustling with winter sports enthusiasts who come to the region to ski and enjoy the mountains in the wintertime.

The town of Matrei in Eastern Tyrol only has 4,600 residents but is one of the largest communities by total area. Matrei is a popular place for winter tourism due to its prime location in the Tauern Valley. The town's historic town center also offers lots of historical buildings for visitors to enjoy. 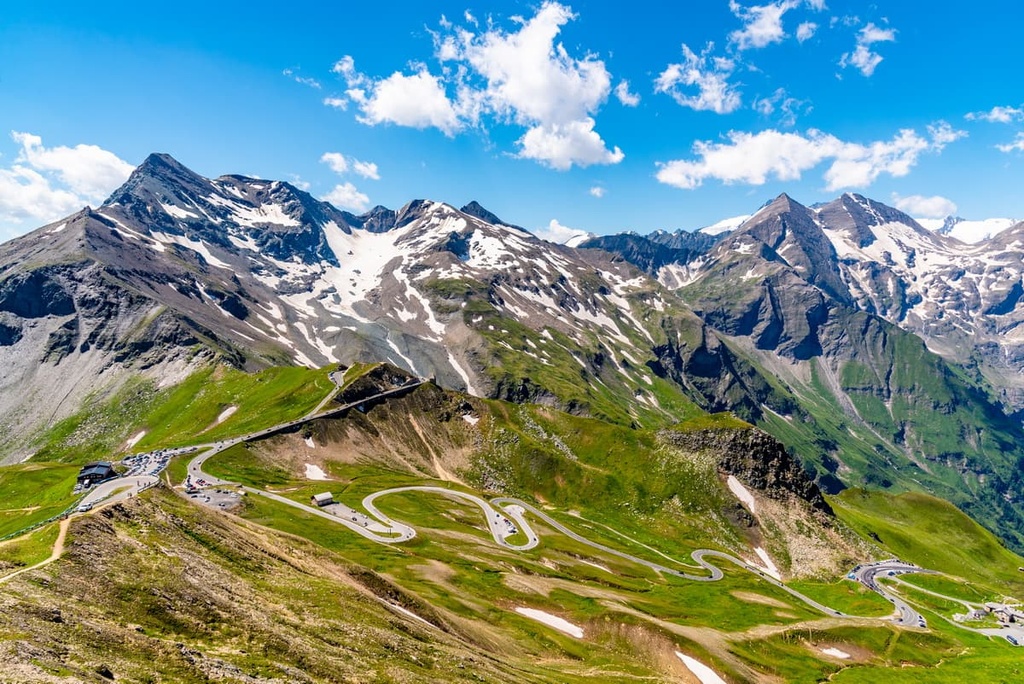 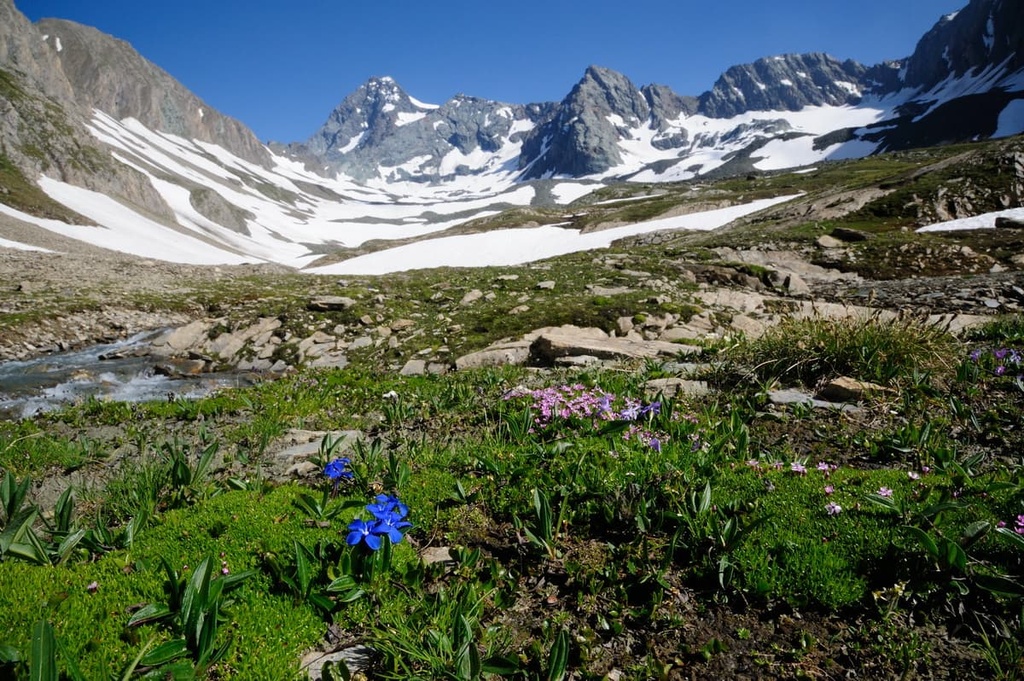 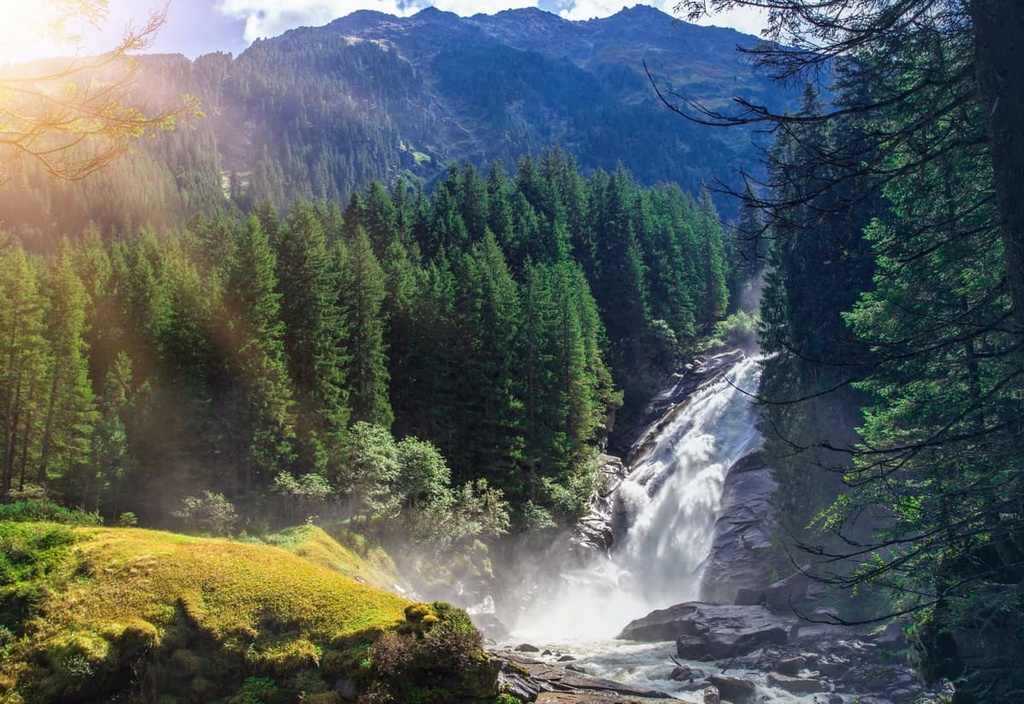 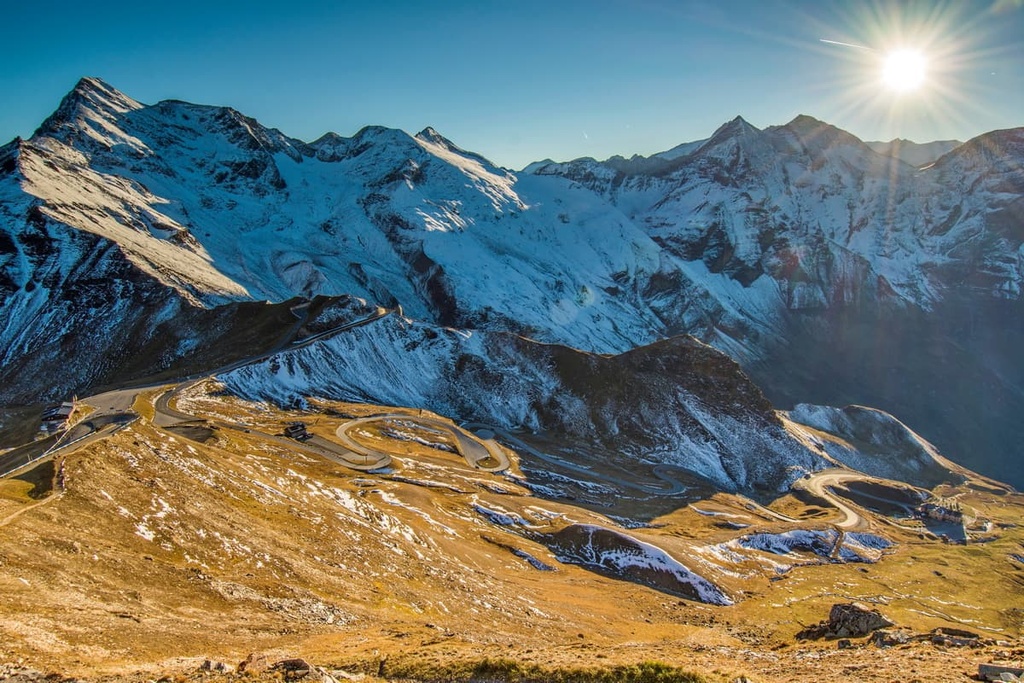