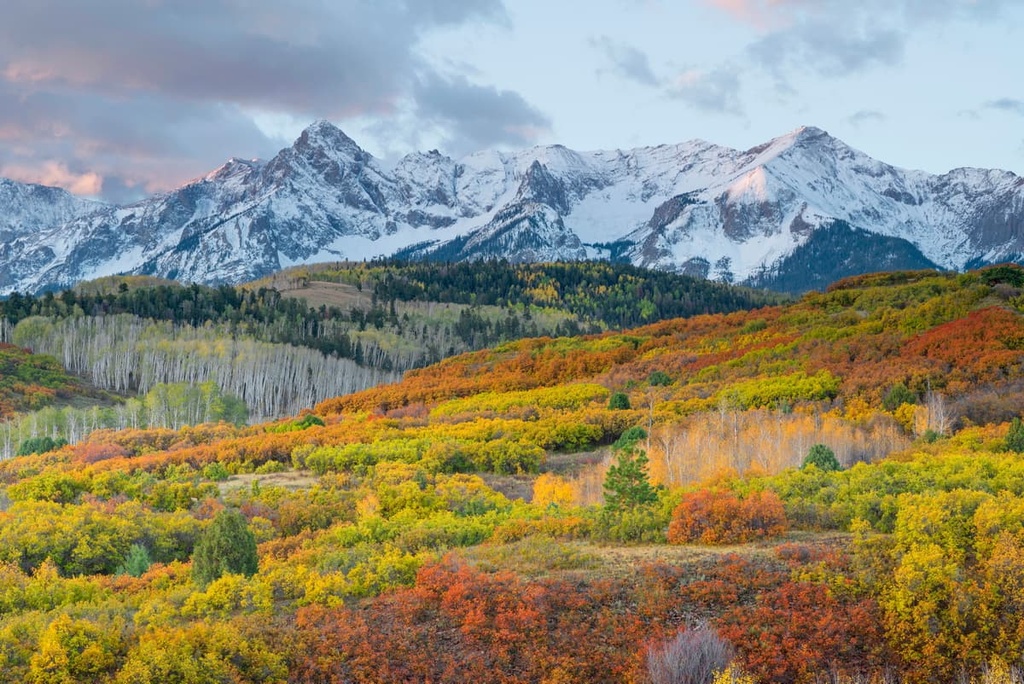 The Uncompahgre Plateau is located in western Colorado, near the state’s border with Utah. The plateau is part of the much larger Colorado Plateau, which covers much of Colorado, Arizona, Utah, New Mexico, and a small part of Nevada.

The boundaries of heateau are marked by the San Miguel and Dolores rivers in the west, the Gunnison and Uncompahgre rivers to the east, and the Colorado River to the north.

The landscape within the plateau is defined by relatively flat mesas separated by deep canyons and ravines. The larger canyons found throughout the plateau include Tabeguache, Spring Creek, Big Red, Roubideau, Big Dominquez, Escalante, and Unaweep.

The watershed of the plateau consists of four major drainages from the Colorado River: San Miguel, Dolores, Gunnison and Uncompahgre. Just to the south of the plateau lie the rugged peaks of the San Juan Mountains.

The main roadway through the plateau is the Divide Road, which runs from the southeast to the northwest. Additionally, the plateau is located in parts of five counties and around 75 percent of the plateau is public land.

Over the past 600 million years, the region has experienced minimal folding and faulting. Rather, the Uncompahgre Plateau rose through a slow uplifting process, helping to preserve the numerous layers of rock found within the plateau today.

Tectonic shifts thrust this region of land further upwards, giving way to its relatively high elevations. As the land began to rise, the grades of the various rivers steepened. As the rivers in the region grew more powerful, they began carving out the dramatic canyons found throughout the plateau.

These deep canyons are important features for geologists that study the Earth’s history. To this day, the major rivers in the region continue to further carve out the distinct canyons of the Uncompahgre Plateau. These rivers include four of the major drainages of the Colorado River, which are the San Miguel, Dolores, Gunnison and Uncompahgre rivers.

Some of the major high points within the Uncompahgre Plateau include Reade Hill, Piñon Mesa, Palisade, Spruce Mountain, and Gibbler Mountain.

Despite its aridity, a variety of flora and fauna inhabit the Uncompahgre Plateau. At elevations below 6,000 ft (1,830 m) various plants are found near the many rivers of the region.

Some of the many bird species found in the area include the bald eagle, Mexican spotted owl, golden eagles, peregrine falcons, whooping cranes and Merriam’s turkeys. Cutthroat trout are common in the various rivers that run throughout the plateau, too.

Humans have inhabited the Uncompahgre Plateau for thousands of years. Petroglyphs can be found on canyon walls and dominant rock outcroppings throughout the region, many of which date back over 2,000 years.

The plateau, along with the land surrounding it, is the ancestral homelands of multiple Indigenous peoples. The Ute people traditionally lived throughout much of the region along with the Southern Paiute, Shoshone, and Hopi tribes.

The first people of European descent to visit the area were likely members of Juan Antonio María de Rivera’s expeditions in the 1760s Rivera was sent by the Spanish governor of New Mexico to search the region for gold.

Though no gold was found, this expedition traveled throughout the Uncompahgre Valley and past where the Uncompahgre and Gunnison rivers converge. Rivera also famously carved his own name onto the face of a cliff in Roubideau Canyon near what is now the town of Delta.

In the late 1770s, two Spanish Franciscan priests, ​Atanasio Domínguez and Silvestre Vélez de Escalante, traveled through what is now called the Uncompahgre Plateau in an attempt to find an overland route between Santa Fe, New Mexico and Monterey, California. The two priests gave the region many of its Spanish-language names, most of which are also now used for the region’s English language place names.

The discovery of gold and silver in the surrounding region led to a large influx of people to the plateau. By the mid-1800s, the Ute were forcibly removed from the land and onto reservations. In 1887, the construction of railroads caused the settler population in the region to rise, leading to further displacement of tribal nations.

Best Hikes on the Uncompahgre Plateau

The Uncompahgre Plateau is home to numerous parks, forests, and hiking routes. Here are some of the most popular hiking regions on the plateau:

A majority of the hikes on the plateau can be found in the Colorado National Monument. The monument encompasses 32 square miles (83 sq km) of land across the northern part of the plateau. The landscape in the monument features dramatic cliffs, monoliths, and sweeping views of the surrounding mesa.

Major hikes within the park monument:

The Turkey Flats Loop Trail takes hikers through one of the largest forests on the plateau. Situated within the Grand Mesa National Forest, this route is 8.8 miles (14 km) long with 1,148 ft (350 m) of elevation gain.

The trail starts at 8,000 ft (2,440 m) of elevation, and winds its way through a dense forest. Hikers follow along the North East Creek for part of the route and pass by a small mountain lake. The viewpoints on the route help showcase the various landscapes throughout the plateau.

The Buck Trail lies within the Uncompahgre National Forest on the southern end of the plateau. The trail is 15.5 miles (25 km) long and it has 1,666 ft (508 m) of elevation gain. This out and back route is less visited than other trails in the region, so it’s a great place to go if you’re looking for some solitude.

Buck Trail does not feature any major climbs as it winds through the lush forest. At the various viewpoints throughout this trail, hikers can see the San Juan Mountains to the south. The path features dense forests interspersed with open fields.

Looking for a place to stay near the Uncompahgre Plateau? Here are some of the best cities and villages to check out in the region:

Grand Junction lies on the northern edge of the Uncompahgre Plateau. The city is home to 65,000 residents, making it the most populous city on the western side of the state. Situated at the confluence of the Gunnison and Colorado rivers, the Grand Junction is surrounded by a stunning red rock landscape.

Opportunities for outdoor recreation are abundant throughout the year in Grand Junction. The various rivers of the region are ideal for fishing, rafting, and kayaking. The mesa surrounding the city is full of hundreds of miles of trails for hiking, mountain biking, and horseback riding. The Colorado Rockies also lie just a short drive to the east of the city.

The quaint downtown area of Grand Junction is full of local breweries, distilleries, and farm to table restaurants. Cultural sites can be found within the city. The Museum of the West is one of the city’s most popular destinations and it showcases the history of the region. Nearby outdoor recreation sites include the Colorado National Monument and Grand Mesa.

The city of Montrose lies along the southeastern edge of the plateau. Ithas a population of 20,000 people. The community lies between the rugged Southern Rocky Mountains and the red rock landscape of the Uncompahgre Plateau.

The city’s close proximity to Black Canyon of the Gunnison National Park has made it a gateway of the region. Warm summer months allow Montrose to transform into a mecca for mountain biking, hiking, rafting and rock climbing. Meanwhile, the cities nearby mountains allow for snowshoeing, skiing, and nordic skiing opportunities during the winter.

Cultural sites worth visiting in the area include the Ute Indian Museum, Museum of the Mountain West, and Montrose County Historical Museum. Local breweries and restaurants provide the perfect setting after a long day of exploring the plateau and surrounding mountains. 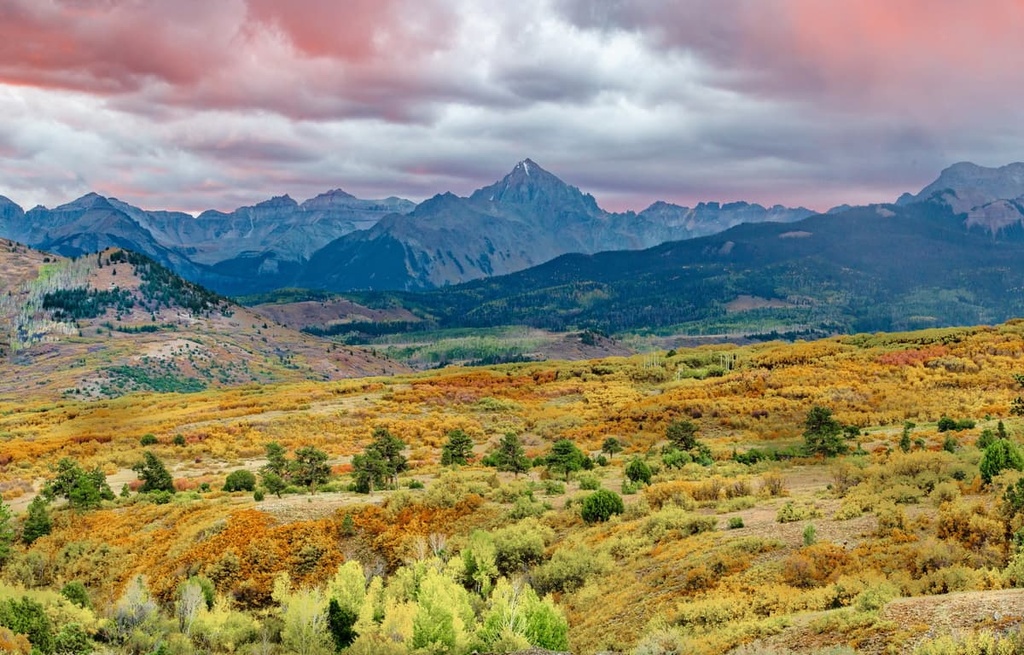 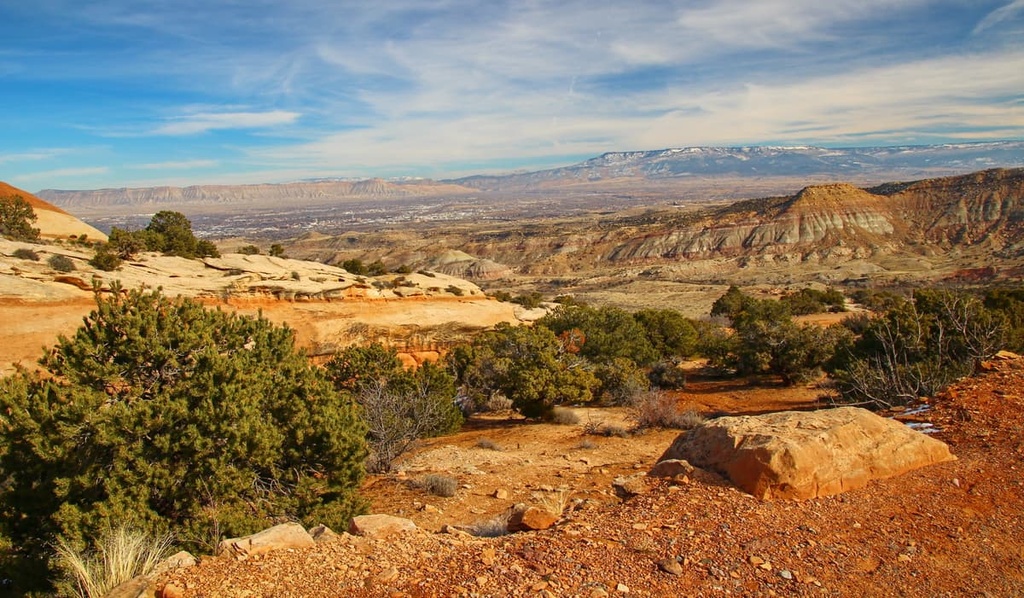 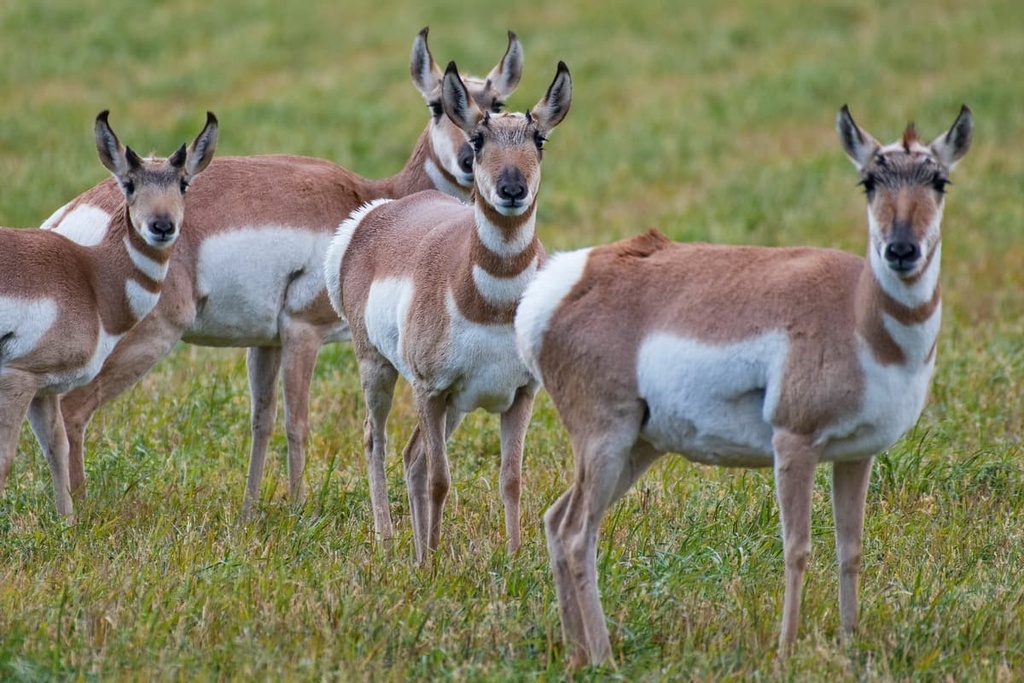 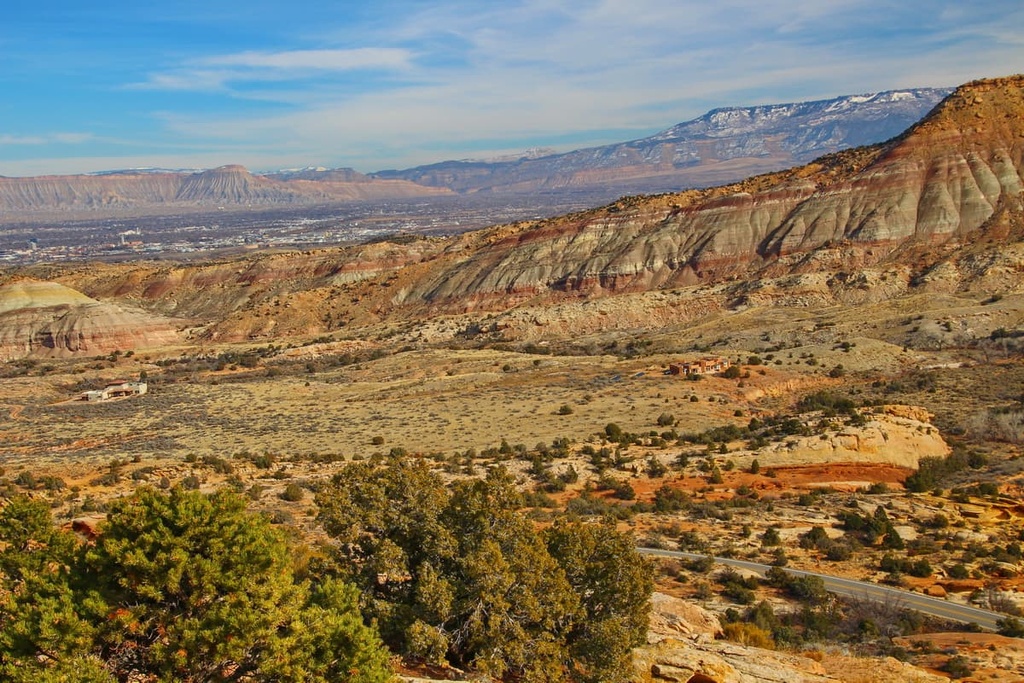 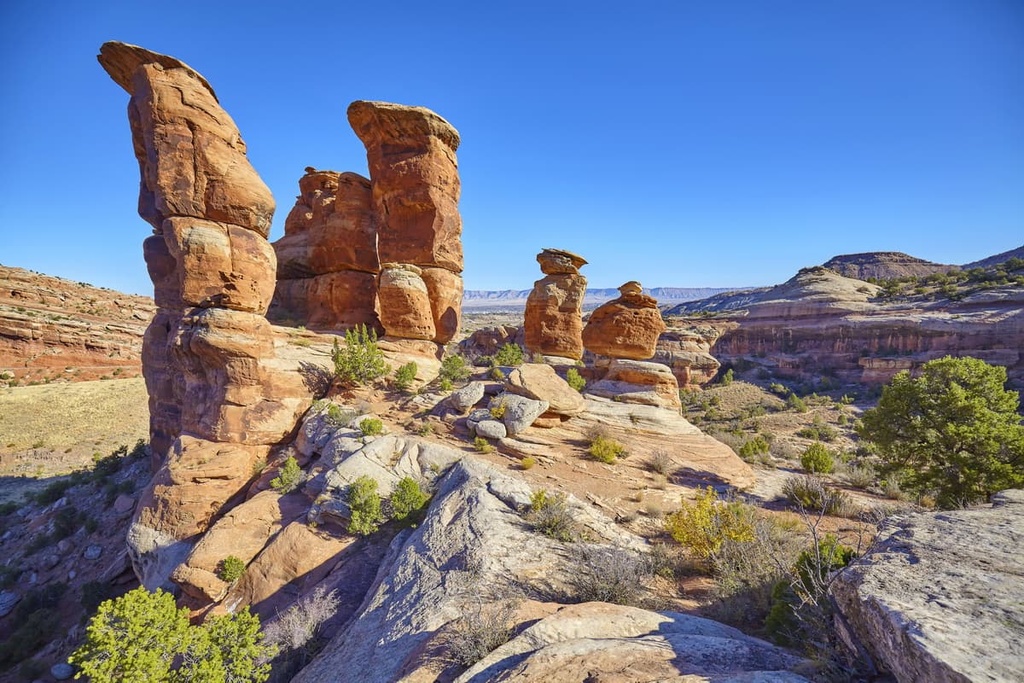 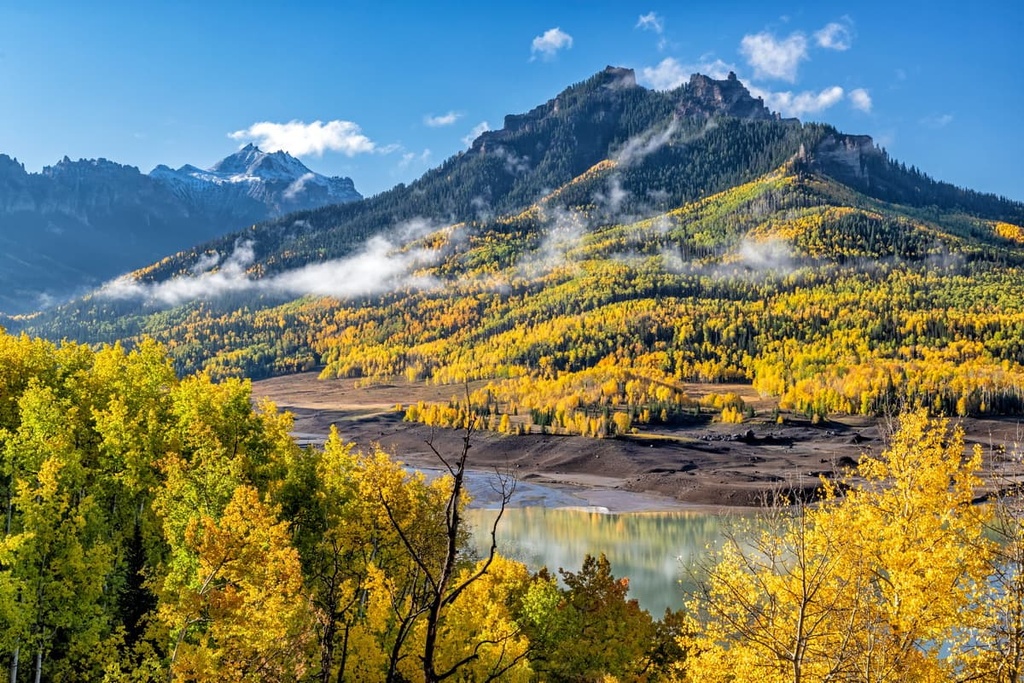 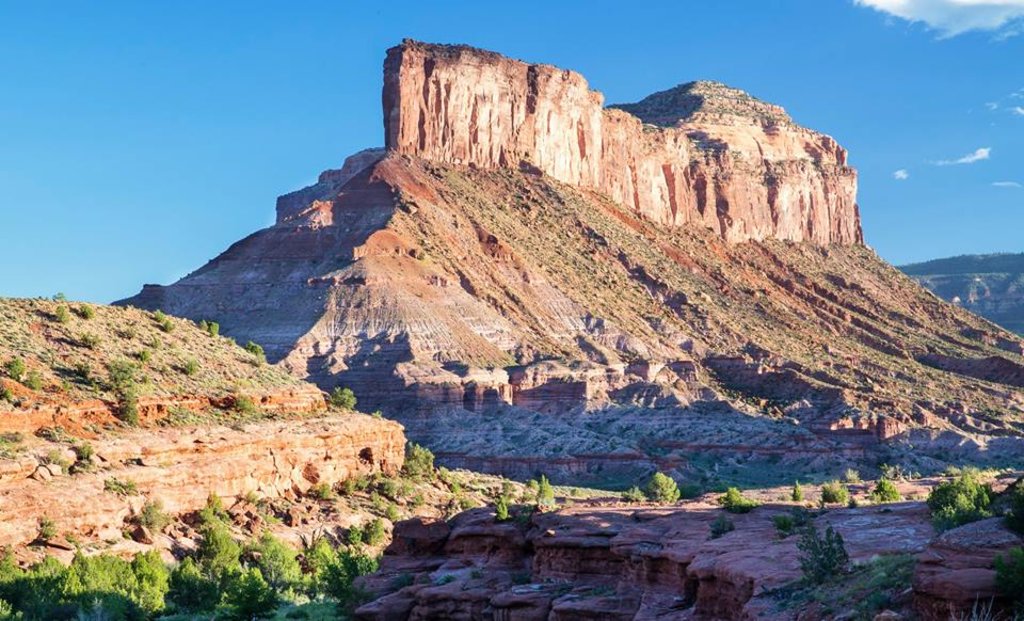