Small but mighty, the rugged and beautiful Ritter Range rises high above the landscape below. Located in the eastern part of the US state of California, just outside of the town of Mammoth Lakes, the Ritter Range is home to 10 named peaks, the highest and most prominent of which is Mount Ritter (13,150ft/4,008m). 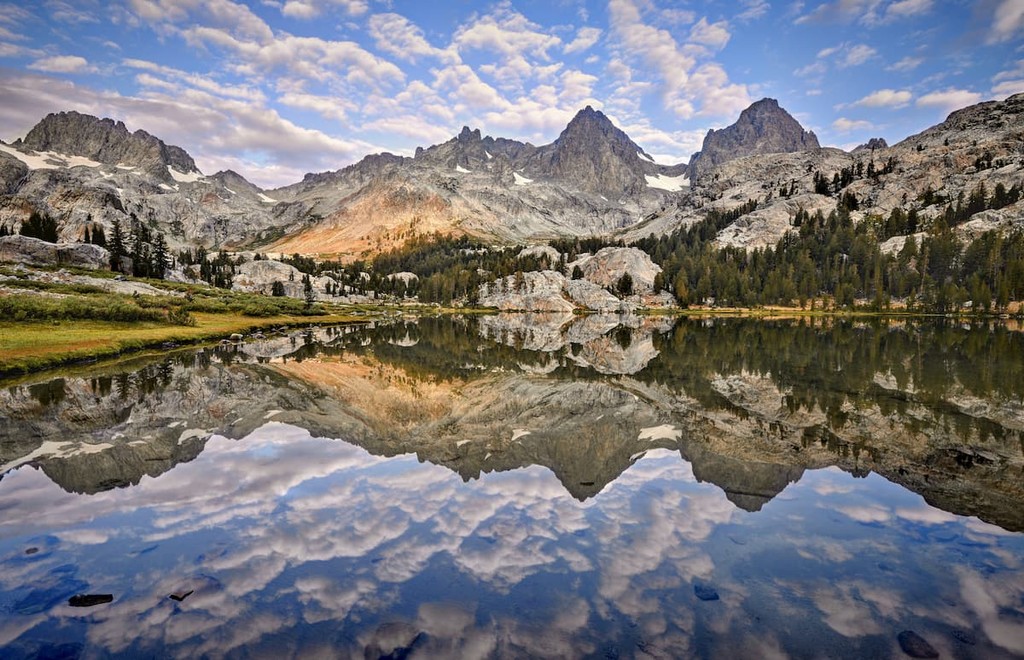 Situated within the eastern part of the Sierra Nevada range in eastern California, the Ritter Range is a small collection of peaks that’s known for its scenic beauty. The range is located in both Madera and Mono counties, just to the west of the town of Mammoth Lakes.

Moreover, the range is nestled within the Ansel Adams Wilderness of the Inyo National Forest and the Sierra National Forest. It also covers the small Devils Postpile National Monument to the east of Mammoth.

Additionally, the Ritter Range is located near a number of the other Sierra Nevada subranges. In particular, the range is situated to the south of the Cathedral Range of Yosemite National Park and to the east of the Clark Range. It is also located to the west of the Owens River Headwaters Wilderness and to the north of the John Muir Wilderness.

The Ritter Range also forms one of the easternmost extents of the Sierra Nevada, serving as a sort of transitionary range between the main crest of the Sierra to the west and the start of the Great Basin Ranges in Nevada to the east.

Within the range, there are a number of notable peaks, including the Minarets. The Minarets are some of the most jagged and recognizable peaks in the region. Interestingly enough, the Ansel Adams Wilderness was first named the Minarets Wilderness until it was renamed for the famous photographer in 1985.

If you want really good views of the Minarets, it’s best to head just outside the range to Minaret Summit, which offers great vistas of the surrounding area.

As a part of the Sierra Nevada, the Ritter Range shares a similar geologic history with many of its neighboring ranges.

In particular, the bedrock in and around the Ritter Range started to form during the Cretaceous. Throughout this period, there was widespread tectonic subduction, which eventually led to the formation of the massive Sierra Nevada batholith.

Additionally, the Ritter Range contains a very thick layer of dark, partially metamorphosed Cretaceous-era volcanic rock. These rocks actually formed at the surface of the Earth at the same time that the Sierra Nevada batholith was forming below ground during a period of extensive regional volcanism.

However, unlike much of the Sierra, where this upper layer of rock has mostly eroded away, this metavolcanic rock is fairly extensive in the Ritter Range. Moreover, the Ritter Range’s rocks were also reheated not long after formation, which has led to the formation of new minerals, including garnets, which are found throughout the range.

Furthermore, it’s believed that the Ritter Range is actually the remnants of an ancient caldera (known as the Minarets Caldera), which once covered much of the region. Thus, there is also a substantial amount of tuff found throughout the range

The Ritter Range is located in the easternmost part of the Sierra Nevada and it does, for the most part, have an ecology that’s typical of the Eastern Sierra.

Due to the range’s location on the eastern side of the Sierra, it receives significantly less precipitation than the peaks on the western side of the main crest of the range. As a result, the Ritter Range and the rest of the Eastern Sierra exhibit more or less the same biotic zones as their westerly neighbors, though at a higher elevation.

Moving higher up in elevation, the range is home to subalpine forests between 10,500 and 11,500 feet (3,200 to 3,500m). These forests are predominately whitebark pine, mountain hemlock, and western white pine.

Finally, the highest elevation ecosystems in the range are alpine zones, which are devoid of all but the heartiest of flora. The alpine zone is mostly sedges, grasses, and willows, though wildflowers do bloom in the summer months.

Meanwhile, wildlife throughout the range includes mule deer, black bears, coyotes, pikas, marmots, and other animals typical of the region.

Like the rest of the Sierra Nevada and what is now California, the land in and around the Ritter Range has long been home to humans. Indeed, the range and its surrounding area is part of the ancestral homelands and traditional territories of many Indigenous peoples, including the Southern Sierra Miwok Nation, the Big Pine Paiute Tribe, and many others.

Although Indigenous peoples have lived in and around the range since time immemorial, the recorded history of European and European-American visitors and settlers in the region starts around the 19th century.

The nearby town of Mammoth Lakes saw its first real settlement attempt by Americans of European descent in the 1870s after prospectors arrived in the region and striked to stake claims to hills near the town. During the next few years, thousands of prospectors flocked to Mammoth in search of gold, though the major mining camps had mostly shut down by the 1880s.

In the latter years of the 19th century, the settlement near what is now Mammoth Lakes at the eastern edge of the Ritter Range had just around a dozen residents. After the turn of the century, however, logging and tourism both brought more settlers and visitors to the region.

By 1907, there was a push to bring more of the land in California under federal purview, a movement that led then-President Theodore Roosevelt to establish Inyo National Forest. Over the years, the forest has grown substantially in size from its original 220,000 acres (80,900 ha) to its current 2.1 million acres (850,000 ha).

Not long after Inyo National Forest was established, President William H. Taft established Devils Postpile National Monument in 1911 by presidential proclamation. Although the monument covers just 798 acres (323 ha), it protects some of the most stunning geological features in the region, namely a set of large columnar basalt cliffs.

More recently, in 1964, the Minarets Wilderness (now the Ansel Adams Wilderness) was established as part of the Wilderness Act. The Ritter Range forms the centerpiece of the wilderness and is often considered to be one of its most stunning areas.

These days, the Ritter Range remains a popular hiking destination, particularly among visitors to the town of Mammoth Lakes. Whether you’re looking for a day hike or a backcountry adventure, there’s plenty to enjoy in the Ritter Range.

On the lookout for your next Ritter Range adventure? Check out these great hikes:

The tallest peak in the Ansel Adams Wilderness, Mount Ritter is a popular climb for more ambitious hikers. Getting to the summit involves first setting up a basecamp at Ediza Lake, which you can get to along the Shadow Lake Trail (see below).

From Ediza Lake, you can make your way up to a saddle between Banner Peak and Mount Ritter before making your way to the summit. It’s important to mention that reaching the summit of Mount Ritter requires quite a bit of scrambling, so this is a hike that’s best for experienced hikers. Also, storms can roll in at any time, so always keep an eye on the weather.

Sometimes called the nicest trail in the Eastern Sierra, the Shadow Lake Trail is an 8.5 mile (13.7km) long path that starts at the Agnew Meadows Trailhead. While Shadow Lake is often a stopping point for hikers making their way to Ediza Lake, it’s a worthy destination in its own right.

The trail provides excellent views of the rest of the region, including nearby Mammoth Mountain. It also intersects with the Pacific Crest Trail, so there are plenty of options for day hikes. Alternatively, you can simply continue on to Shadow Lake, where you can sit back, relax, and enjoy the view.

Another of the Ritter Range’s popular lakes, Minaret Lake is a scenic destination for anyone looking to view the Minarets up close. The trail is about 13.5 miles (21.7km) round trip and it is among the most heavily traveled paths in the range.

Along the way, you’ll traverse dense forests of white pines, travel through alpine meadows, and get glimpses of raging waterfalls. That being said, the hike is strenuous and you will need a permit if you want to spend the night near the lake, which can be hard to come by during the summer months.

Often touted as one of the most beautiful lakes in the eastern part of the Sierra Nevada, Thousand Island Lake sits below the stunning Banner Peak, which reflects back into its glimmering clear water.

There are a number of different trails that lead to the lake, though one of the more popular options is the 8.75 mile (14.1km) long High Trail, which is a section of the Pacific Crest Trail. The hike is particularly popular among backpackers, but it’s worth mentioning that you’ll need a permit if you plan to spend the night in the Ansel Adams Wilderness.

Despite being home to some truly stunning views, the Ritter Range’s trailheads are relatively easy to get to. Here are some of the best places to check out near the range during your next visit:

The town of Mammoth Lakes is the only incorporated community in Mono County. It is located just at the eastern base of the Ritter Range and it is home to a population of about 8,200 people.

These days, Mammoth Lakes is a major tourist destination for visitors to the Eastern Sierra. In addition to offering unparalleled access to the Ritter Range, Mammoth also has a world famous ski resort, so it’s a popular place to visit in the winter months.

Located to the southeast of the Ritter Range, the city of Bishop is one of the largest communities in the region. With around 4,000 residents in its municipal area and about 14,000 people who live just outside the city limits, Bishop is a hub for culture and commerce in Inyo County.

Although Bishop is home to its own great hiking destinations, it’s also just around 1 hour away from some of the Ritter Range’s most popular trailheads.

The largest city in a 3 hour driving distance of the range, Reno is located to the northeast of the Ritter Range and is home to about 250,000 people. As the second largest city in the state, Reno is a major center for business and travel in northern Nevada. It also has a major airport, so it offers great connections to the rest of the United States. 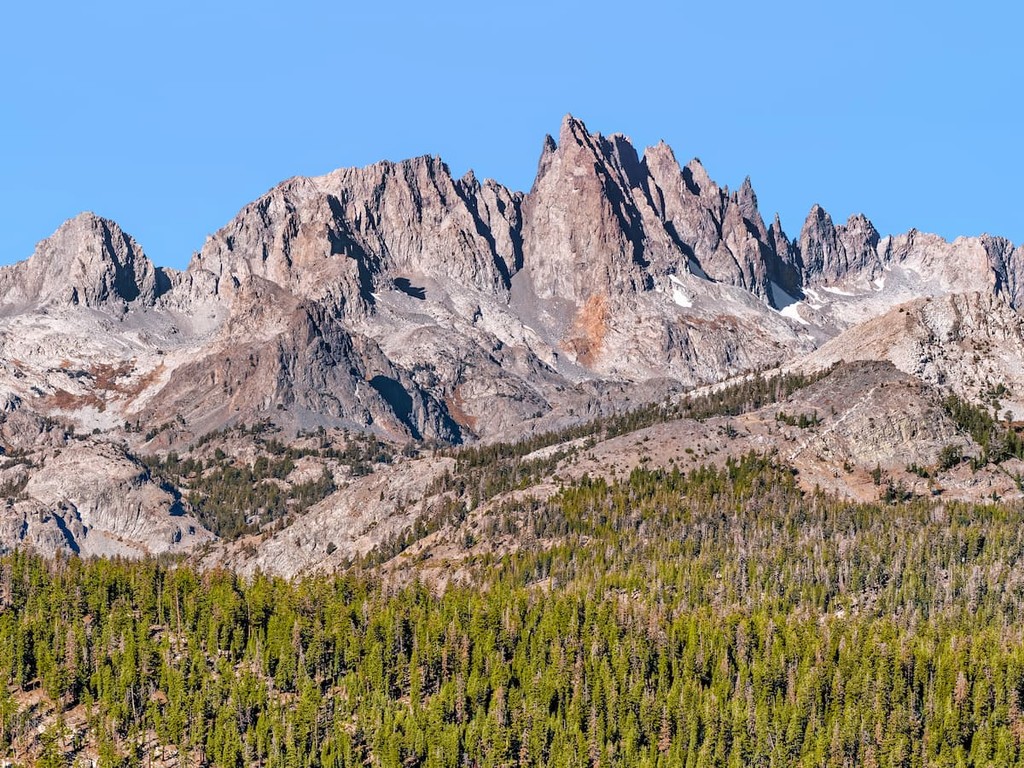 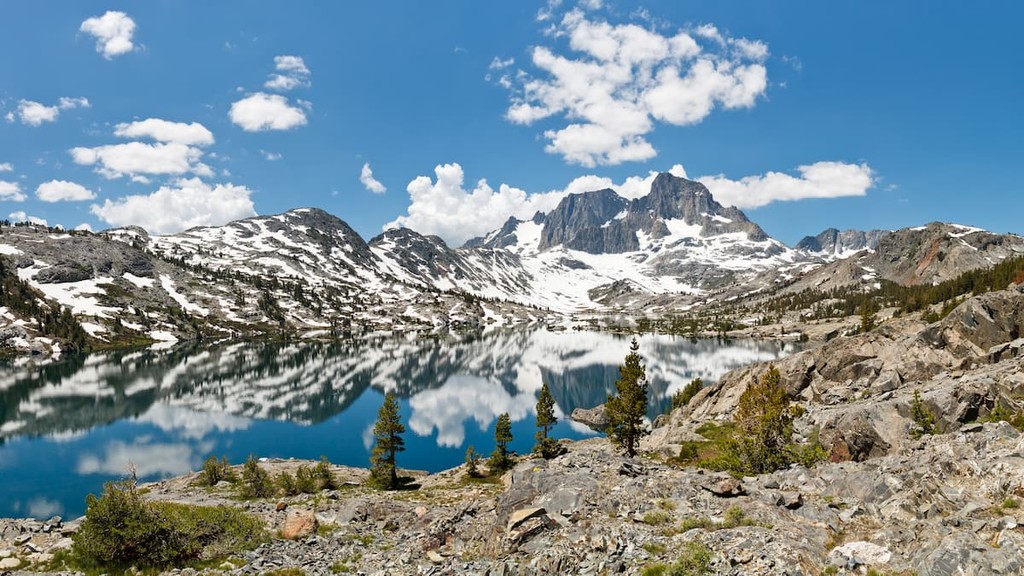 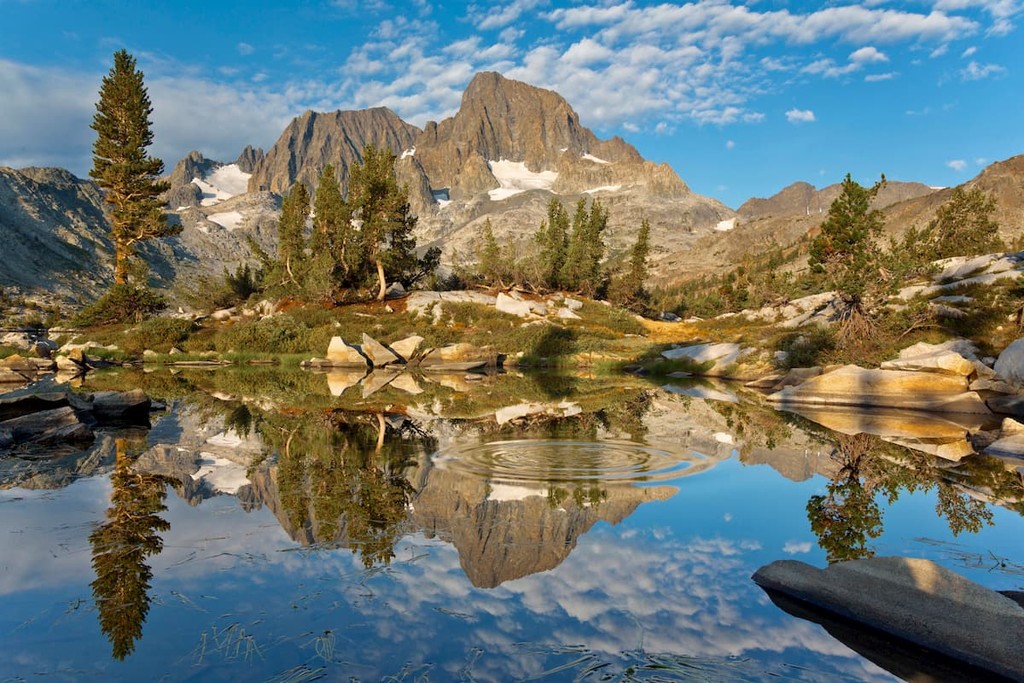 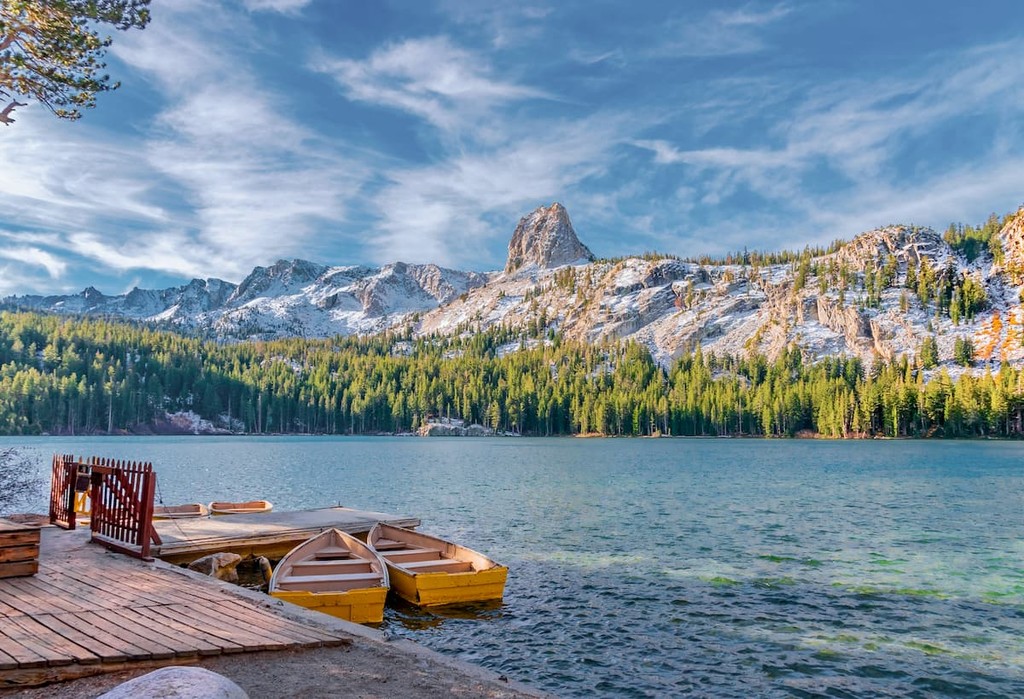 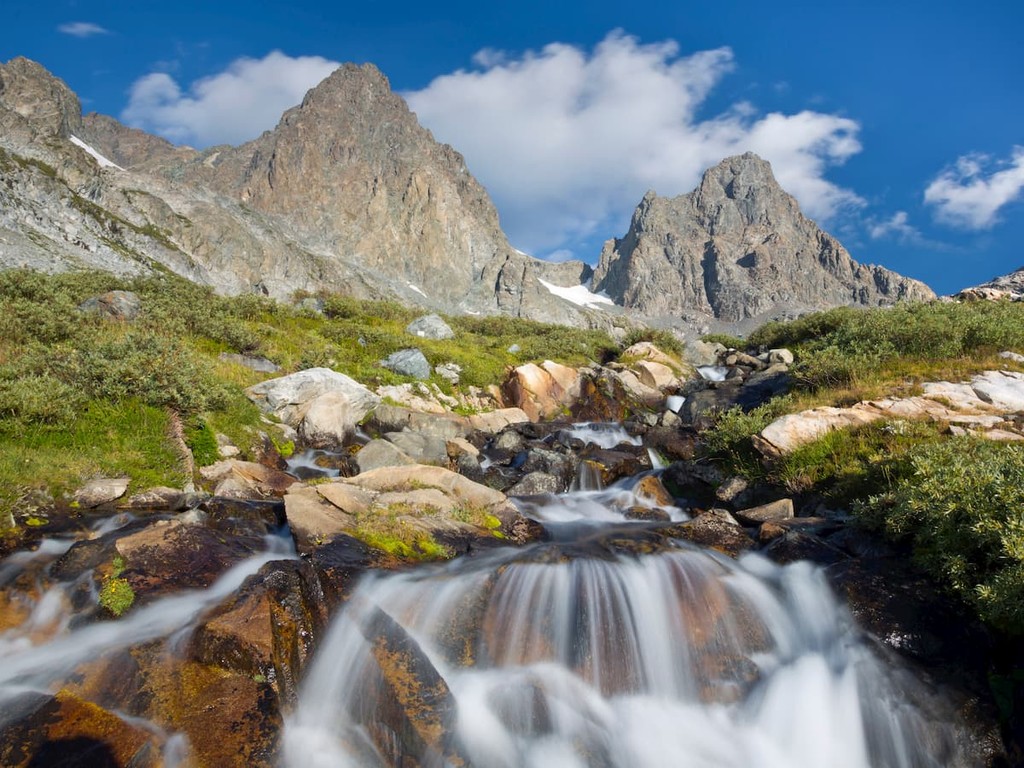 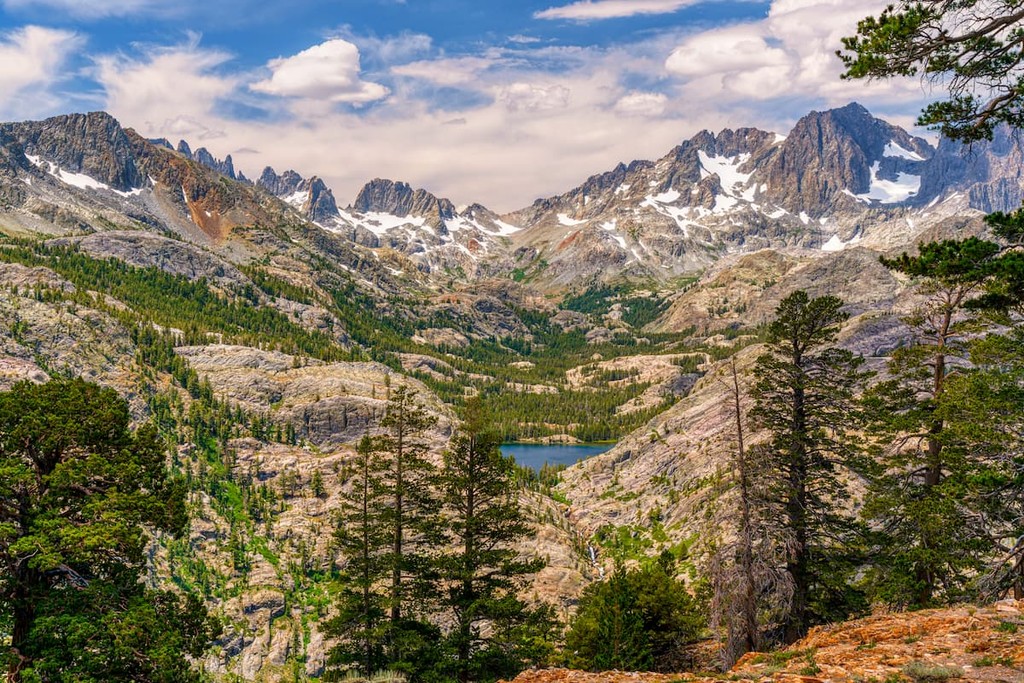 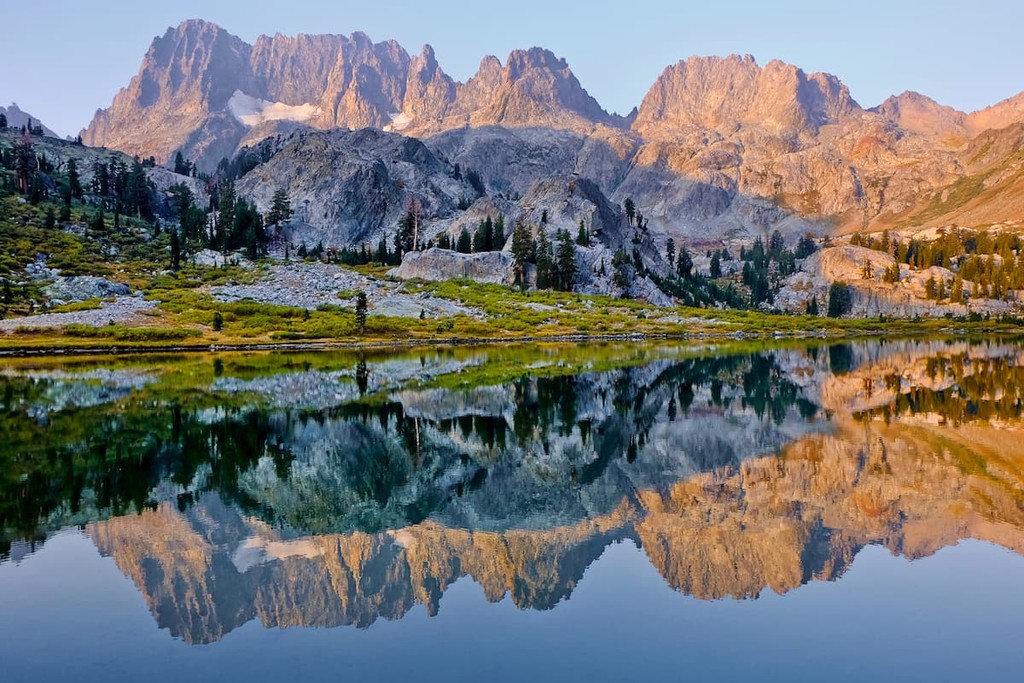