The Kitchen Range is a subrange of the Park Ranges (also known as the Main Ranges) of the Canadian Rocky Mountains. The range is located in the Columbia-Shuswap Regional District of British Columbia, Canada and has 4 named peaks. The highest and most prominent mountain in the range is Sophist Mountain, which has an elevation of 2,993 m (9,820 ft) and a prominence of 838 m (2,749 ft).

There are four named peaks in the Kitchen Range, the tallest and most prominent of which is Sophist Mountain with 2,993 m (9,820 ft) of elevation and 838 m (2,749 ft) of prominence. The other peaks in the range include Lid Mountain, Poker Mountain, and Solitude Mountain.

The range is located in the Columbia-Shuswap Regional District of British Columbia and is primarily accessible via forestry service roads that run along the east side of the Columbia River. While the Kitchen Range doesn’t have any protected areas, there are several provincial and national parks located nearby, including:

When the ancient continent of North America was part of the supercontinent of Pangea between 300 and 180 million years ago, marine sediments accumulated off the west coast of the continent. The sediments eventually accumulated into layers that were many kilometers thick.

As Pangea started breaking up about 180 million years ago, North America drifted west and collided with oceanic tectonic plates. During the subduction of the oceanic plate, exotic terranes were stuck to the western edge of the continent. Those exotic terranes would ultimately form most of the land of contemporary British Columbia.

Nevertheless, the expanding western coast of the continent was still being pushed by the tectonic collision, putting immense pressure on the continental crust. This pressure caused it to heat up, fold, and eventually crack and buckle.

Eventually, the first mountains to rise on the west coast of Canada were the Columbia Mountains. They were followed by the Interior Mountains, the Coast Mountains, and then the Insular Mountain.

After the formation of most of the Western Cordillera approximately 75 million years ago, the Rockies finally started to rise. For the following 35 million years, the marine sediment that had accumulated off the coast was pushed, bent, folded, and pushed several kilometers above sea level to form the Rockies.

Most of the Rockies that we see today are formed from marine sediment, which became limestone and dolostone. The durability of the limestone has allowed for creation of the majestic and precipitous peaks that the Canadian Rockies are famous for.

The mountain building event that created the Rockies is called the Laramide orogeny. Toward the end of the Laramide orogeny, as the tectonic plates began shifting and changing their trajectory, some slippage occurred, and the ancient coastal margin slipped back west.

The Kitchen Range has ecologies representative of the alpine and subalpine of the Canadian Rocky Mountains. These regions are defined by mountains, high foothills, and deep glacial valleys. They have short, cool summers and cold, snowy winters.

The alpine is the zone above the treeline, where intense winds coupled with a short growing season make it a difficult place for plants and animals to thrive. While plant life is sparse in the alpine region, what does grow there is tenacious and hardy.

Local topography plays a major role in where plants will thrive in the alpine zone. Depressions in the ground and the leeward side of rocky outcropping are often inhabited by communities of heather, sedge, and other hardy shrubs or dwarf trees.

Sedge communities may fill the depression around snowbeds, while mountain heather, and grouseberry grow against rocky outcroppings. Small patches of Alaska harebell can even be found along windswept ridges and the steepest slopes.

Trees at the alpine elevations are stunted and sparse and the sporadic forests at these elevations consist primarily of subalpine fir and Engelmann spruce. Furthermore, the trees in this zone are often spread out in knee high tangles called krummholz, which is an adaptation to the fierce winter winds that sweep through the landscape.

Large mammals may cross alpine regions in the range as part of their migration; however, they don’t typically linger. The white-tailed ptarmigan, gray-crowned rosy finch, horned lark, and American pipit are found only in alpine habitats during nesting season, but they have a broader range throughout the rest of the year.

Engelmann spruce and subalpine fir grow in open stands upon the slopes of the Kitchen Range, while lodgepole pine forests inhabit the lowest elevations. Lodgepole pine is a pioneer species that thrives in an area after forest fires have occurred.

Some of the other trees that are found along the slopes of the Kitchen Range include whitebark pine, which is occasionally found at high elevations, and subalpine larch, which often grows along ridges. Dwarf birch and willow grow in stands with more moisture, such as north-facing slopes. Buffalo-berry, grouseberry, and five-leaved bramble are common undergrowth in the subalpine forests of the range.

About 12,000 years ago, the glaciers in the region started to melt. As a result, vegetation started to grow and inhabit the valleys and the slopes of the Kitchen Range. After the flora expanded into the area, fauna soon followed.

About 10,000 years ago, the eastern ranges were developing a steppe-like ecology that drew mammoths, horses, camels, elk, ancient bison (Bison antiquus), caribou, and muskoxen, which migrated from the south. The earliest evidence of human habitation near the Kitchen Range is found in the Athabasca River Valley and dates back about 10,000 years.

Some of the first people to inhabit what is now Alberta are thought to be members of the Clovis culture. The Clovis culture is known by their fluted projectile points, which were first uncovered in Clovis, New Mexico. During the subsequent millennia, ancient people migrated and established communities across the region.

At times, the ancient cultures developed new technologies to help them adapt, while at other times, other cultures with dominant technology supplanted the previous inhabitants. The Kitchen Range is the traditional territory of the Ktunaxa, Sinixt, Shuswap, and Métis.

The fur trade brought Europeans to the region, such as David Thompson, who was the first European to cross the Athabasca Pass through the Rockies in 1810–1811. With the opening of the pass, fur traders were able to traverse the Rocky Mountains and expand their trade; however, the rugged topography of the area has prevented most development and industrialization of the range.

To the north of the range, Jasper House was built in 1813 as a rest and provisioning stop for traders traveling to and from the west. The area around the Kitchen Range was never heavily settled by European immigrants. Further to the north, toward Jasper, the few settlements that existed were small and there were several homesteaders in the region.

With the inception of Jasper National Park, tourism has steadily climbed in the region. The first tourists were mountaineers who made the difficult trek to the region in search of unclimbed mountains. After the Icefields Parkway opened in 1940, tourism to Jasper National Park increased exponentially; however, the Kitchen Range is still quite isolated and best accessed via boat, plane and forestry roads.

Best Hikes in the Kitchen Range

There are few, if any maintained hiking trails in the Kitchen Range. Anyone looking to trek in the range should come prepared for extensive off-trail travel in some of the most remote parts of southeastern British Columbia.

That said, the major attraction of the Kitchen Range is the nearly endless opportunities for backcountry skiing at the southern end of the range. The Chatter Creek Lodge is located a short helicopter flight from Golden, British Columbia and is built upon the slopes of the Kitchen Range.

The lodge offers cat skiing, ski touring, and snowmobiling. The winter-only lodge offers cozy accommodations, memorable meals, and opportunities to relax with a massage or in the hot tub.

Nearby Cities and Accommodations

The Kitchen Range is located along the west slopes of the Rocky Mountains and is a remote, backcountry area. Summer access to the range is typically via helicopter, boat, or forestry roads, and winter access is limited to snowmobiles and helicopters. The following are some of the towns that you may pass on your way to the Kitchen Range:

The Kitchen Range is considered part of Golden’s backcountry and most excursions into the range pass through the community. Located at the confluence of the Columbia and Kicking Horse Rivers, Golden is situated between the stunning Rocky Mountains to the east and the Columbia Mountains to the west.

David Thompson made camp near the future townsite of Golden as he made his way westward toward the Pacific Ocean at the beginning of the nineteenth century. The town grew due to the immense forests and the logging industry in the region; however, it was also one of the first places to hire Swiss guides to guide tourists to the top of many of the region’s peaks.

The Chateau Lake Louise sits on the shore of Lake Louise and looks out at the Victoria Glacier. There are numerous world class hikes from the Chateau, including the hike to the teahouse at the Plain of the Six Glaciers.

Additionally, the Lake Louise Ski Hill is located within close proximity of the town. Other notable winter activities include the Ice Festival, which features an ice castle on the lake, as well as an ice carving competition that brings competitors from across the world.

Home of the famous Cave and Basin Hot Springs, Banff offers plenty of lodging and a unique mountain lifestyle experience within Banff National Park. With amazing mountain views from the streets, like the iconic East End of Rundle (EEOR), and sites like the world class Fairmont Banff Springs Hotel, Banff offers a first-class mountain experience.

Luxurious lodging and relaxing spas are awaiting tourists as they return from exploring the amazing wilderness around Banff. Mountain trails, peaks, and phenomenal views are easily accessible on a day trip. Hiking, cycling, shopping, dining, skiing, and canoeing are all activities to enjoy while in Banff, especially at the nearby Mount Norquay Ski Resort.

The Chatter Creek Lodge is located at the southern end of the Kitchen Range and is accessible via helicopter at the Chatter Creek Heliport. The lodge offers accommodations for winter adventures in the Rockies, which include cat skiing and snowboarding, ski touring, and snowmobiling.

After an exhilarating day on the slopes, you can find respite in the lodge and enjoy the backcountry from the warmth of the log cabin lodge. Chatter Creek offers comfortable accommodations, delicious meals, and superb amenities that include a hot tub and access to a massage therapist during your stay. 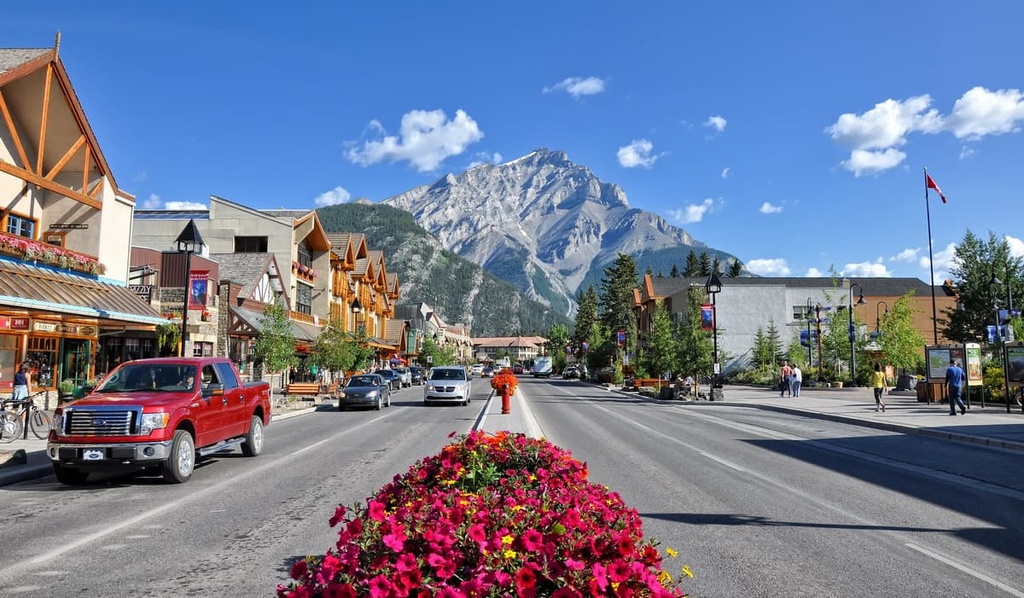 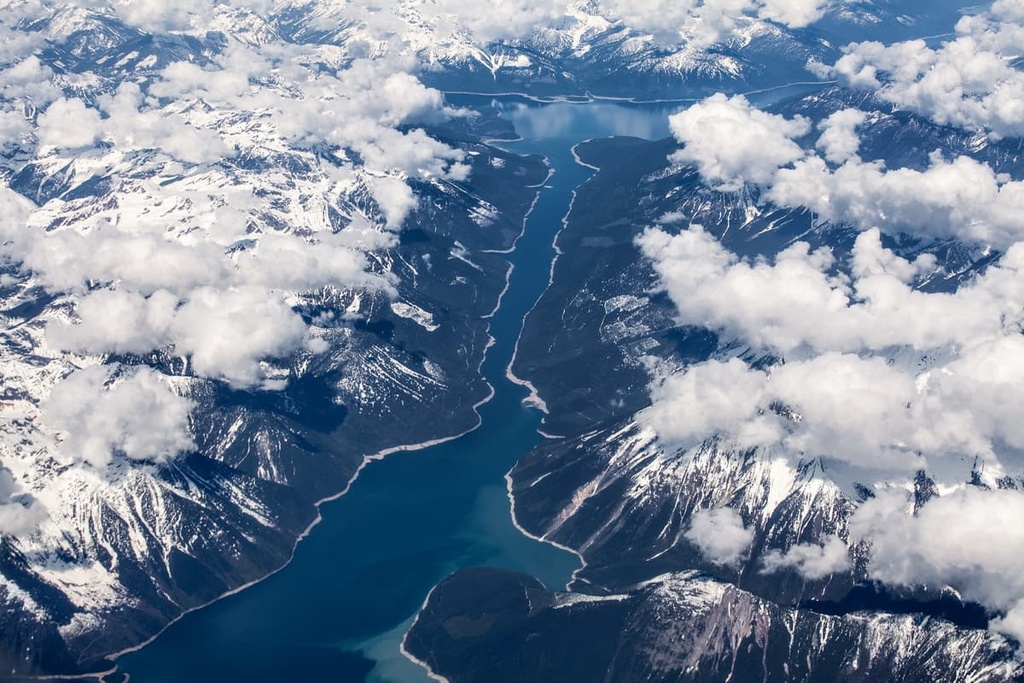 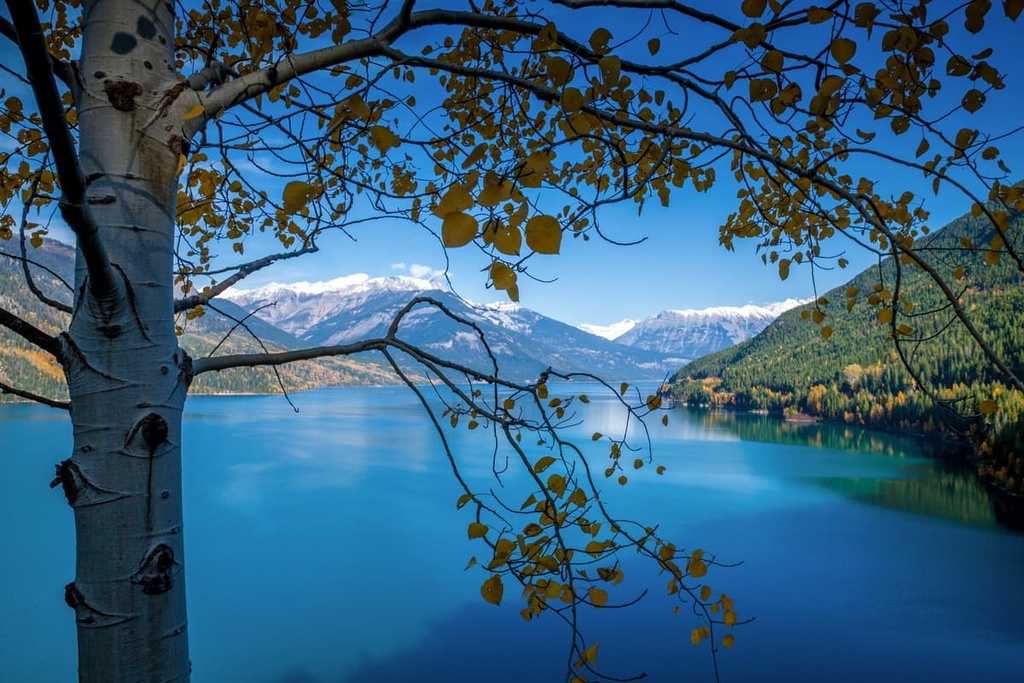 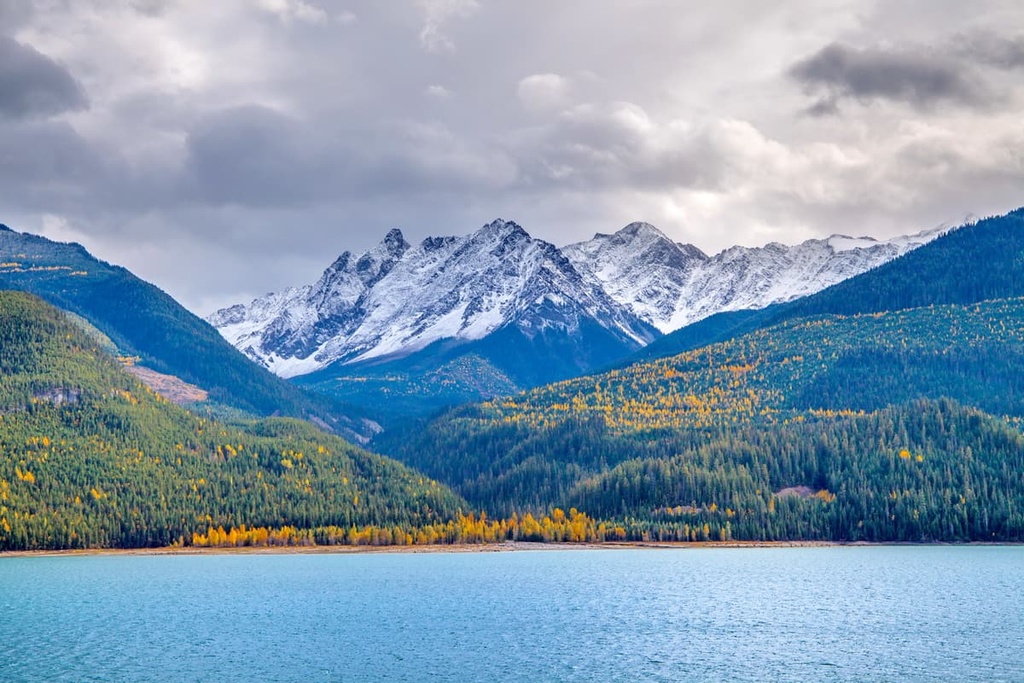 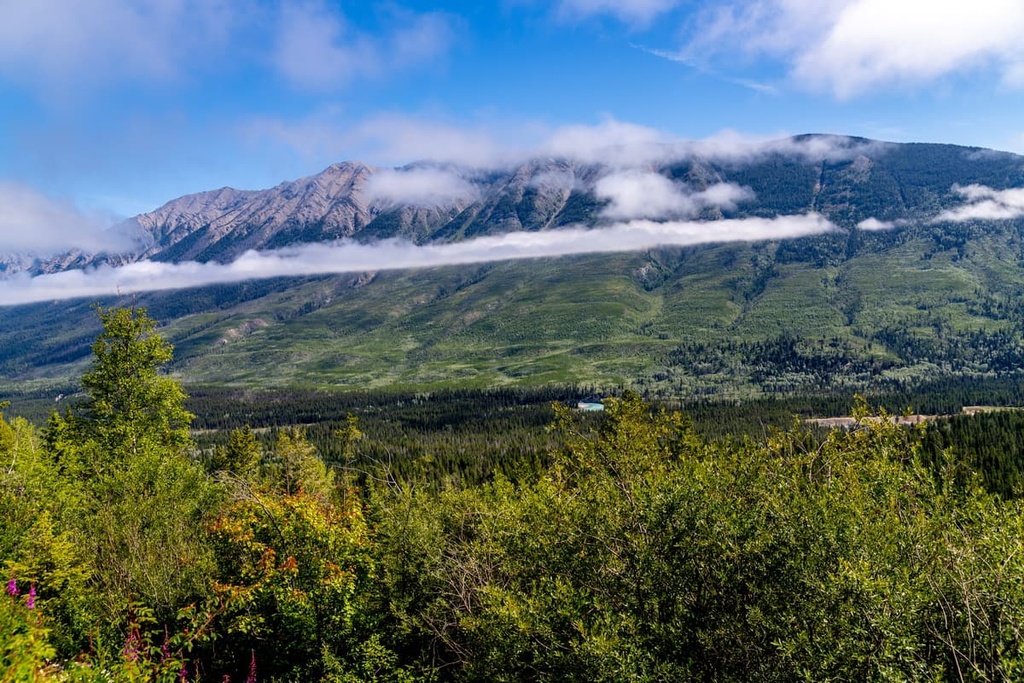 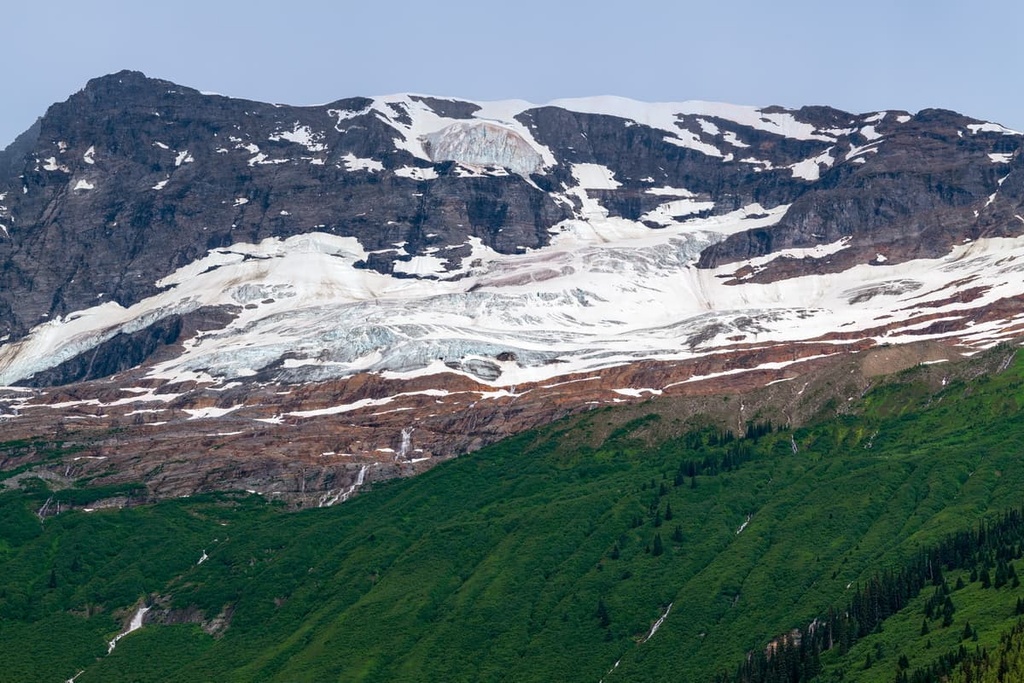