There ten national parks spread across mainland France and the other French lands situated overseas. The first of these national parks was created in 1963 and the most recent was inaugurated in 2012 by the French Agency for Biodiversity. The French national parks cover a total area of 9162 sq.km, 2% of which falls to the protected lands in metropolitan areas. 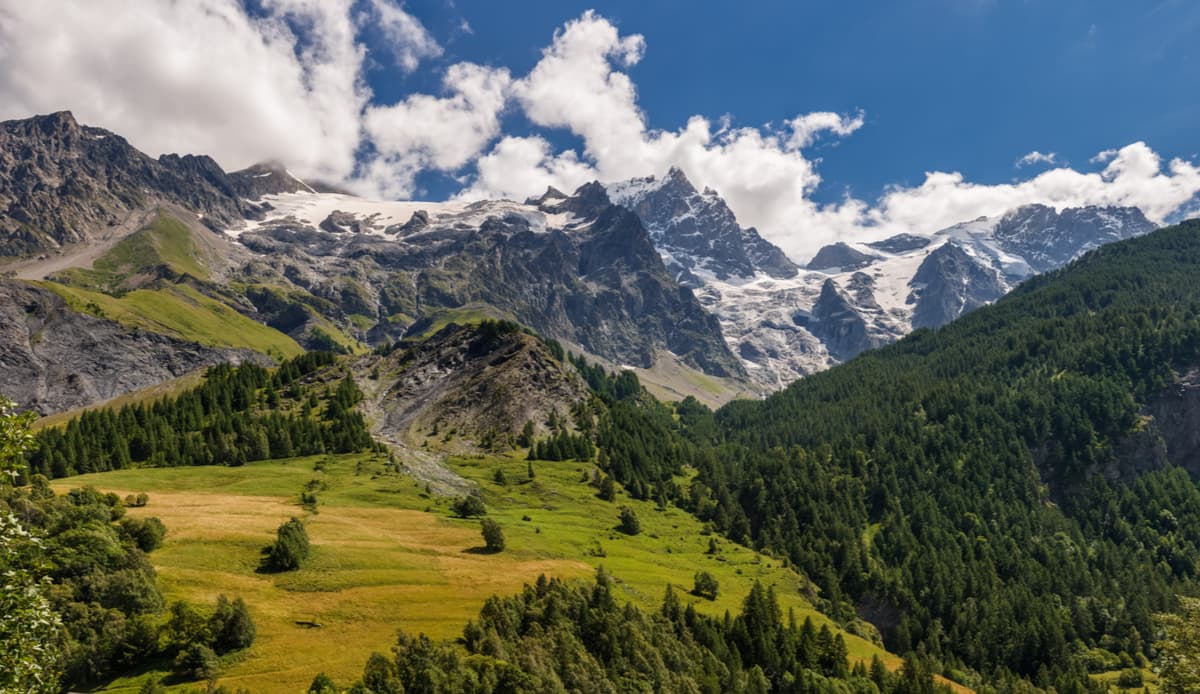 The Vanoise National Park is situated in the Savoie region in France. The Vanoise spans between the Tarentaise Valley in the north and the Maurienne Valley in the south, and goes along the valley of the river Isère. It covers an area of 528,39 sq,km. On the other side of the French-Italian border, the park is twinned with the Gran Paradiso National Park (est. 1927) making their combined area of 1,250 km² the largest protected area in western Europe.

Whilst there were already several nature reserves in France at the time, and also one in the Vanoise massif, the Vanoise was the first true-blue National Park. One of the main reasons for its creation in 1963 was the near extinction of the Alpine Ibex as a result of excessive hunting. In the national park, all forms of hunting are now forbidden and there is a peripheral zone dedicated to environmentally friendly tourism development. In the park, everything is protected: the fauna, the flora, and even the rocks. You can read more about the Vanoise National Park in our designated page.

Photo by Cecile Musy on Unsplash

The coastal and marine Port-Cros National Park is located primarily on the Mediteranean island of Port-Cros, east of Toulon. It is primarily focused on marine biodiversity and conservation. The national park actually consists of the Port-Cros and Porquerolles islands, the Giens peninsula, Salins d’Hyères, and the Cap Lardier. As far as mountains go, there is only one named mountain - Mont Vinaigre which has a prominence of 194m. That is not to say that the Port-Cros National Park is not worth visiting, far from it! There are many hiking trails throughout the region that will appeal to everybody. If you want to enjoy the treasures of the Meditertanean coast, this is an excellent place to start.

Photo by Valentin B. Kremer on Unsplash

From just hearing the name of the famous Pyrenees National Park, I'm sure you are already picturing the rugged mountain terrain and crystal clear lakes of this beautiful region. The park is located on the border between France and Spain, some of the park's highlights are the Cirque de Gavarnie and the highest peak, the Pico de Aneto.

The Pyrenees region has some of the most varied flora in Europe. There are around 2,500 species of flowers and plants. Depending on the season, there is always something to see. The fauna is equally diverse with over 4,000 species of animals roaming freely in the region. The animals which are specific to the Pyrénées are the bearded vulture, the Pyrenean desman and the brown bear. In the high mountains the marmottes and ibex can be found, the latter being recently reintroduced into the area.

Walking and hiking is very popular in the Pyrénées. There is the challenge of the Haute Randonnée Pyrénéenne, an 800km hiking route that traverses the national park. Cycling is equally popular in the region with Tour de France mountain pass favourites such as the Col du Tourmalet and the Col d’Aspin.

Photo by Michael Liao on Unsplash

The Cévennes National Park is located in the south of France, in the middle of the triangle of Alés, Mendes and Millau, and at the south eastern border of the Massif Central. The Cévennes is known for the Aven Armand cave, as well as its highest peaks of Le Portalet and Mont Mars. The plateaus are increasingly popular with hikers who are looking for a nice change from the Pyrénées and the Alps.

The Écrins National Park is a mountainous territory (the highest point is the Barre des Écrins at 4,102m) with great valleys and lush meadows. It is located in the south-eastern France in the Dauphiné Alps south of Grenoble and north of Gap. The park is shared between the departments of Isère and Hautes-Alpes. It is an ideal location for hiking and other outdoor activities.

The park covers an area of 918 sq,km., with high peaks, extensive glacier fields, wide valleys, rich alpine pastures, intricate subalpine woodlands and awesome lakes. There are over 2,500 species of flora and 350 endemic species of fauna. This diversity is a result of the large differences in altitude of the high mountains and the different climates of the Alps and the Mediterranean.

Situated in the Alpes Maritimes and the Alpes de Haute Provence in the south-east of France, this Alpine region is very popular with hikers offering them over 600km of trails. It is well known for being one of the wildest national parks in France, and one of the most varied in terms of landscapes. The Côte d’Azur brings Mediterranean influences to these Alpine mountains. Two of the highest peaks in the national park are Cima Sud Argentara (3,297m), Mont Pelat (3,050m). The area is also home to wolves, which were reintegrated into the park in 1992.

Photo by Jp Valery on Unsplash

A calanque is a geological formation in the form of a narrow and deep valley with steep edges, partly submerged by the sea. They are typically made from limestone and are found on the Mediterranean coast. The Calanques National Park is the most recently established one, on the 18th April 2012. The park includes the southern French coastline, several islands as well as the vast aquatic space between them, thus boasting one of the Mediterranean’s most diverse underwater ecosystems.

Located on the Basse-Terre island, the Guadeloupe National Park was created in 1989 - the first French national park located overseas. The aim of the park is to preserve the Anilles fauna and flora. The park consists of tropical forest and various marine environments. There are 181 named mountains in the Guadeloupe National Park. The highest and the most prominent mountain is La Soufrière (a volcano). There are around 300 kilometres of trails which allow you to explore the park. Guadeloupe is an excellent area for hiking enthusiasts who are looking for unspoilt countryside.

Photo by Hakan Tas on Unsplash

The Guiana Amazonian Park is located in French Guinea in South America. The main aim of this national park has been to protect the Amazonian rainforest located within French Guinea. The national park covers 40% of French Guinea, making it the largest national park of France and consequently of the European Union. Whilst seeking to protect the rainforest, it also aims to preserve the original ways of life of its inhabitants, notably the Maroni, the Creoles and the Metropolitans. There are 41 named mountains in the Guiana Amazonian Park. The highest and the most prominent mountain is Bellevue de l'Inini.

Photo by Thomas Allsop on Unsplash

The Réunion National Park is located on the French overseas island of Réunion, to the east of Madagascar. The park was established on the 5th March 2007. It is renowned for its volcanic landscapes covered with tropical forests, its coral reefs and stunning beaches. The island is fairly mountainous with over 40% of the land covered by mountains. The highest and the most prominent mountain is Piton des Neiges.