Boasting a unique mix of fertile valleys and jagged, glaciated peaks, the Matanuska-Susitna Borough is an administrative district located in the South Central park of the US state of Alaska. The borough contains 188 named mountains, the highest of which is Mount Hunter (14,573ft/4,442m) and the most prominent of which is Mount Marcus Baker (13,176ft/4,016m).

The Matanuska-Susitna Borough, or, the Mat-Su, as it's often called, is a borough (administrative region similar to a county) in South Central Alaska. It covers an area of 25,258 square miles (65,420 sq. km), the vast majority of which is covered with land, not water.

The borough has an estimated population of over 100,000 people, making it the second most populated borough in the state after the Municipality of Anchorage and ahead of the Fairbanks North Star Borough, the Unorganized Borough, and the Kenai Peninsula Borough.

There are a number of sizable towns and census-designated places in the Mat-Su, including Knik-Fairview (the largest), Palmer (the county seat) and Wasilla, as well as the communities of Talkeetna, Tanaina, and Willow, among others. Talkeetna is a popular access point for bush planes entering the Alaska Range while Willow is the official host of the restart of the Iditarod Trail Sled Dog Race each year.

The borough is bordered to the north by the Denali Borough and to the south by the Kenai Peninsula Borough. On the east and west, the Mat-Su is bordered by the Unorganized Bourough’s Valdez-Cordova, Yukon-Koyukuk, Bethel, and Southeast Fairbanks census areas.

The Chugach Mountains extend far to the south of the borough, into the Kenai Peninsula, where they are part of Kenai Fjords National Park, and to the east, where they wrap around the Prince William Sound before ending at their border with the Saint Elias Mountains.

Meanwhile, the Alaska Range, which is home to North America’s tallest Peak - Denali - covers the northernmost part of the Mat-Su borough, as well as much of the Denali Borough. The Alaska Range extends for some 400 miles (643.7km) in a crescent shape around the Mat-Su Borough, reaching as far south as Lake Clark National Park and Preserve and as far north as Denali National Park and Preserve.

The geological history of the Mat-Su Borough is the story of its two main mountain ranges - the Chugach Mountains and the Alaska Range.

Within the valley itself, the bedrock is predominantly sedimentary, with layers of metamorphosed rock on top. The valley is dominated by the flow of its two namesake rivers, the Matanuska and Susitna.

Both of these rivers flow off of glaciers of the same name, with the Matanuska boasting an impressive length of about 27 miles (43) and a width of about 4 miles (6.4km) as of 2020. In particular, the Matanuska Glacier, which originates in the heart of the Chugach Mountains, is a particularly popular tourist destination, as it is the largest car-accessible glacier in the United States.

In sharp contrast to the low-lying valley floors below, the peaks of the Chugach Mountains and, especially those of the Alaska Range, boast jagged ridges and peaks that often stay snow capped for most, if not all of the year (particularly in the Alaska Range).

The peaks within the borough often feature an exceptional amount of prominence above their neighboring mountains, with over 1 dozen peaks that have prominences over 3,000 feet (914m).

Notable peaks within the borough include Mount Marcus Baker, Mount Hunter (Begguya), Kichatna Spire, Sovereign Mountain, Mount Russell, Mount Dickey, Mount Bradley, and The Moose’s Tooth. In particular, The Moose’s Tooth, while not necessarily high by Alaska Range standards, is a famous alpine climb in the Ruth Glacier area, thanks to its difficult climbing.

Within the Mat-Su Borough, there are a number of different ecosystems due to the borough’s extreme changes in elevation.

In fact, the borough is one of the few places in the state of Alaska where the climate, landscape, and soils are fertile enough to support an agricultural industry. The majority of Alaska’s farms are located in the Matanuska Valley, where farmers raise livestock and grow hearty vegetables, some of which can obtain record-large sizes due to the region’s long summer days.

In the lower elevations of the borough’s mountain ranges, the landscape is dominated by coniferous forests. The primary tree species in the region is Sitka spruce, though other species, such as mountain hemlock, alder, and willow are common in certain areas.

Within these lower elevations, wildlife is abundant, including black and brown bears, moose, Dall sheep, and mountain goats. The rivers in the borough also support all five species of Pacific salmon.

At the highest elevations of the Mat-Su borough, conditions are harsh and the landscape is mostly ice, rock, and snow.

The Mat-Su Borough, along with the rest of Alaska, has been home to humans for thousands of years. In particular, the Dena’ina and Ahtna were among the largest groups in the region, while the Koyukon and Tanana lived mostly north of the borough’s boundaries and the Alutiiq mostly lived to the south, around the Kenai Peninsula.

Among the earliest non-Indigenous visitors to the region were Russian fur trappers who came in the late 1700s.

In the late 1890s, George Palmer, an entrepreneur and man of many trades, settled in the Matanuska Valley, started a small farm, and ran a few shops to support a growing group of homesteaders.

The town, which was later named Palmer, also became a popular homesteading location among miners who were returning from the 1913 Nelchina gold stampede and wanted to start a more agricultural lifestyle. During this time, a number of coal mines were established near the towns of Palmer, Chickaloon, and Eska, which also helped to drive population growth in the town.

These coal mines became a point of interest to the US government toward the end of the 19th century and helped spur the construction of the Alaska Railroad in the early 1900s. By 1917, the railroad connected the Chickaloon coal deposits in the Mat-Su to the city of Seward on the Kenai Peninsula.

As a result of this railroad connection, agriculture also boomed in the Mat-Su, especially after a New Deal-era attempt to establish the “Matanuska Valley Colony” in 1935. This colony attempted to create a farming community in the Mat-Su Borough by giving midwestern farmers a 40 acre (16 ha) plot in the region at a very low cost.

Unfortunately, many of the original farmers and their families left within a decade of the program’s start, partially due to the difficulties associated with living in the region and due to the relatively poor nature of the valley’s soils.

While the colony didn’t quite workout, it still has a lasting legacy in the town of Palmer, which is home to many of the descendants of the remaining colonists, and in the establishment of the Mat-Su as an agricultural region in the state.

Within the Matanuska-Susitna Borough, there are countless opportunities for hiking and outdoor adventure. Here are some of the best places to check out:

Chugach State Park is located in the southernmost part of the Mat-Su Borough. It contains 157 named mountains, the highest and most prominent of which is Bashful Peak.

The park offers a sizable network of maintained trails and is one of the largest state parks in the country, behind the Anza-Borrego Desert State Park in California and the Wood-Tikchik State park in the Unorganized Borough near the community of Dillingham.

Lake Clark National Park and Preserve is situated in the southwesternmost corner of the Mat-Su Borough. It covers some 4 million acres (16,308.9 sq. km) of terrain, nearly all of which is completely undeveloped.

The park is home to 12 named peaks, the highest and most prominent of which is Mount Redoubt. Getting to the park requires a very, very long overland journey, a boat, or a flight to/from Port Alsworth from Anchorage, Kenai, or Homer.

Since Lake Clark is very remote, there are few maintained trails in the park. However, it makes for a great off-trail adventure for people looking to get off the beaten path in the Alaska backcountry.

Denali National Park and Preserve is located in the northern part of the Mat-Su Borough. The park contains 98 named mountains, the highest and most prominent of which is Denali - the tallest peak in North America (though it’s outside of the Mat-Su area).

Denali is a popular destination for experienced mountaineers, though it also offers excellent backpacking opportunities. Although Healy, the closest town to the park’s visitor’s center is in the Denali Borough, the community of Talkeetna is just 2.5 hours to the south.

From Talkeetna, visitors can take flightseeing tours around the park to see the beauty of the Alaska Range from above.

Technically speaking, the Mat-Su Borough has just 3 cities: Houston, Palmer, and Wasilla. However, the borough is one of the most populous in Alaska and is close to the state’s largest city. Here are some good places to stay during your adventures:

While not technically located in the borough, Anchorage is just a short drive away from the Mat-Su. It is less than a 1 hour drive from Palmer to Anchorage, so flying into Alaska’s largest city is a popular choice.

Anchorage has a plethora of shops, hotels, and restaurants to check out. The city also has a great museum and is home to the state’s largest airport, as well as the Lake Hood Seaplane Base, which happens to be the busiest seaplane base in the world.

Palmer is the country seat of the Mat-Su Borough. It has a population of nearly 6,000 people and is less than a 1 hour drive from the city of Anchorage. Palmer is also known as the host of the Alaska State Fair and it is home to the National Outdoor Leadership School’s (NOLS) Alaska branch.

Wasilla is a short 20 minute drive to the east of Palmer and a 50 minute drive from the city of Anchorage. It is the largest city in the borough, though technically the census-designated place of Knik-Fairview is the largest community. Much of Wasilla’s workforce actually commutes to anchorage, though there is a bustling tourism, fishing, and agricultural industry in the city. 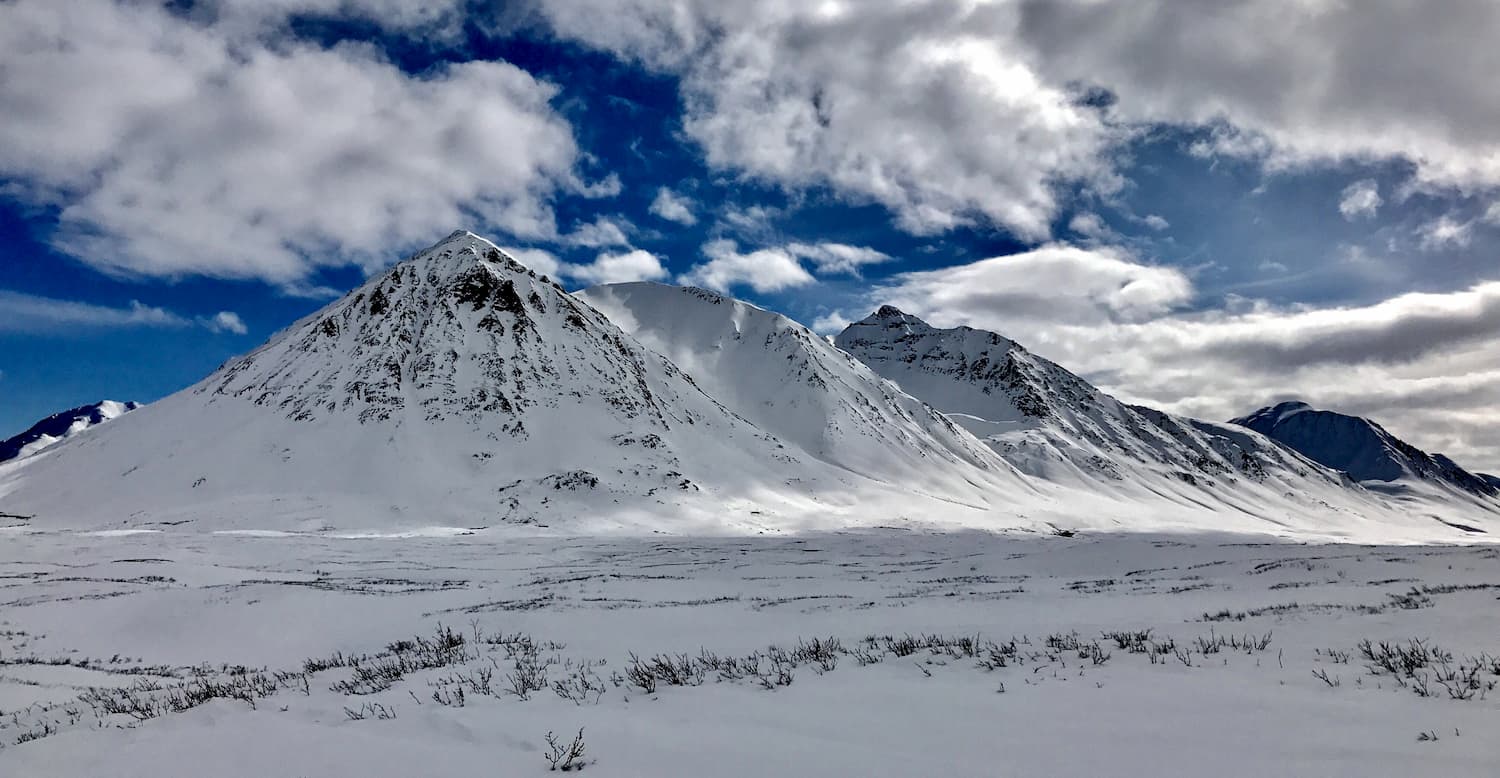 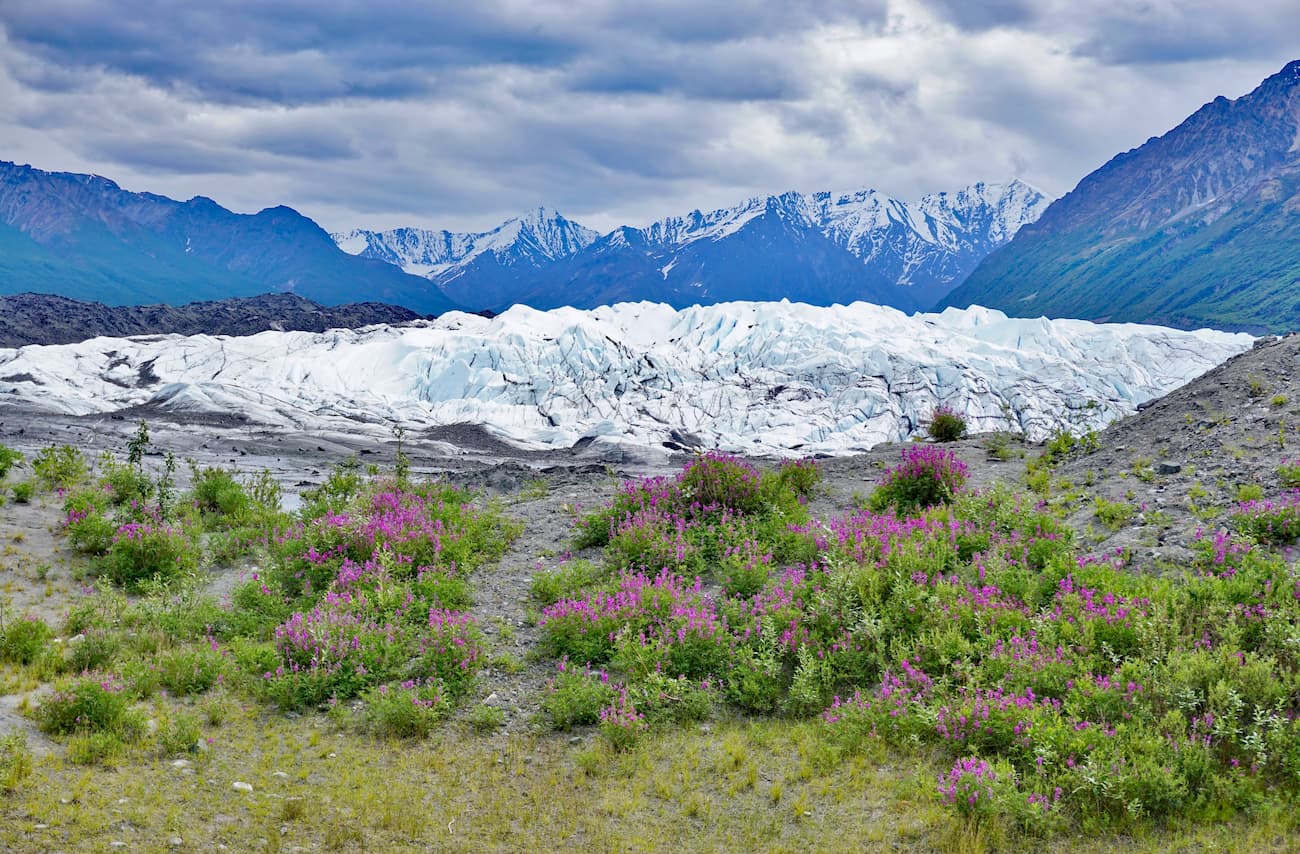 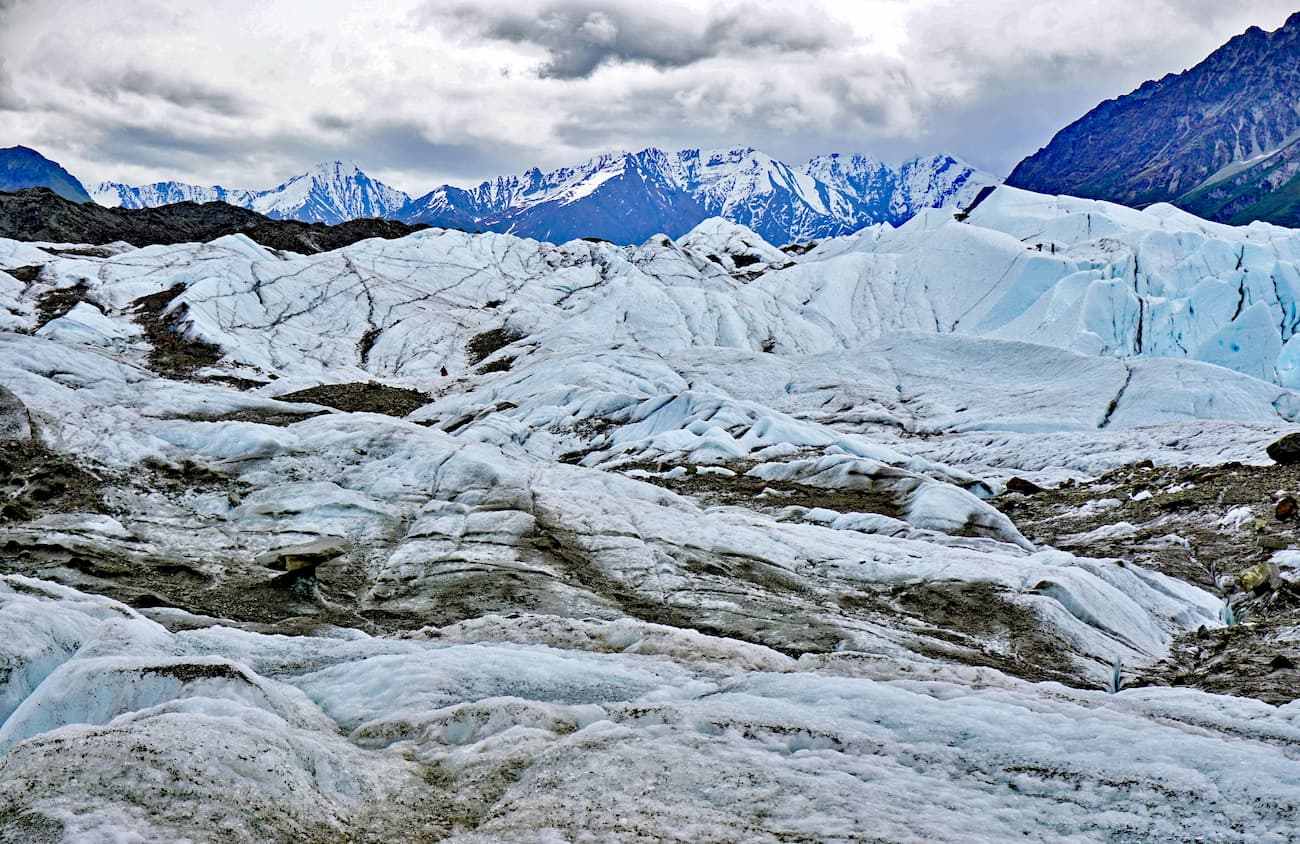 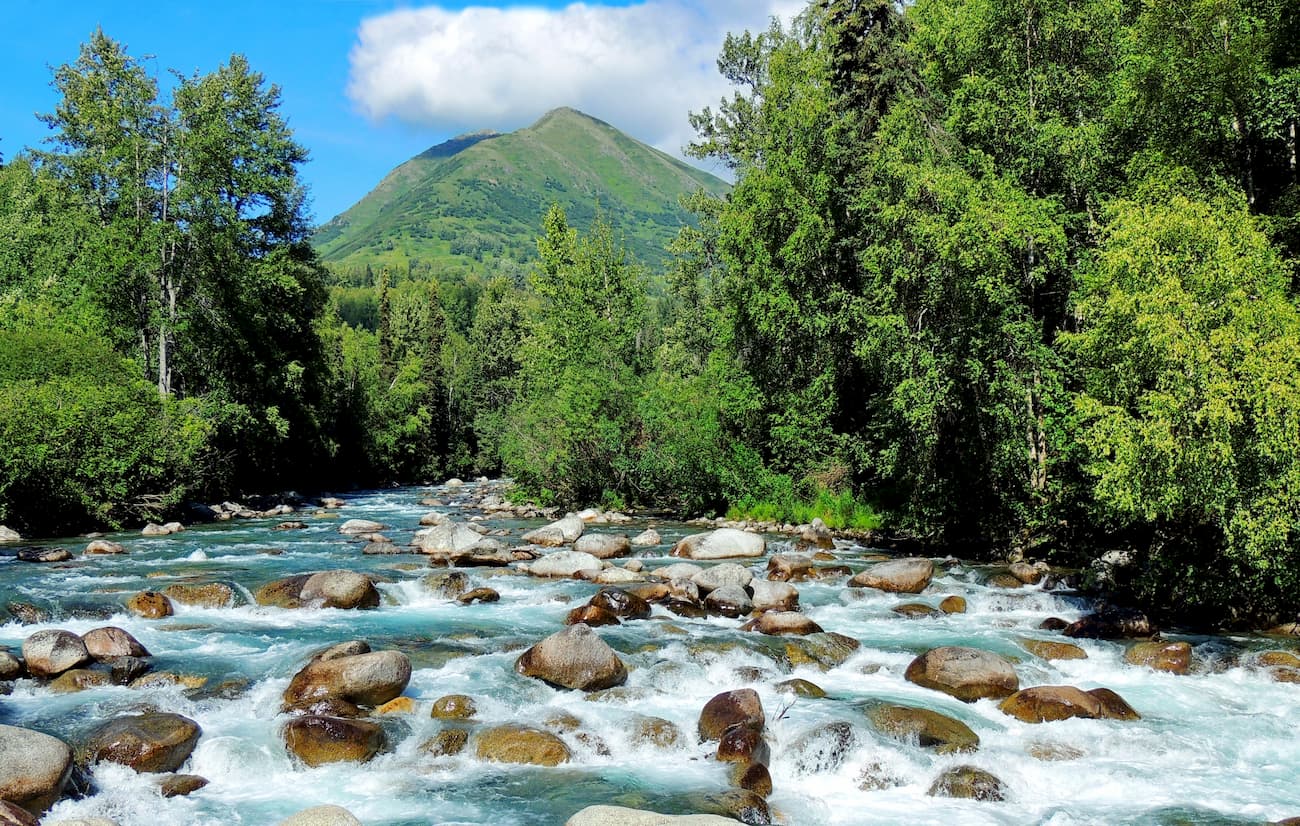 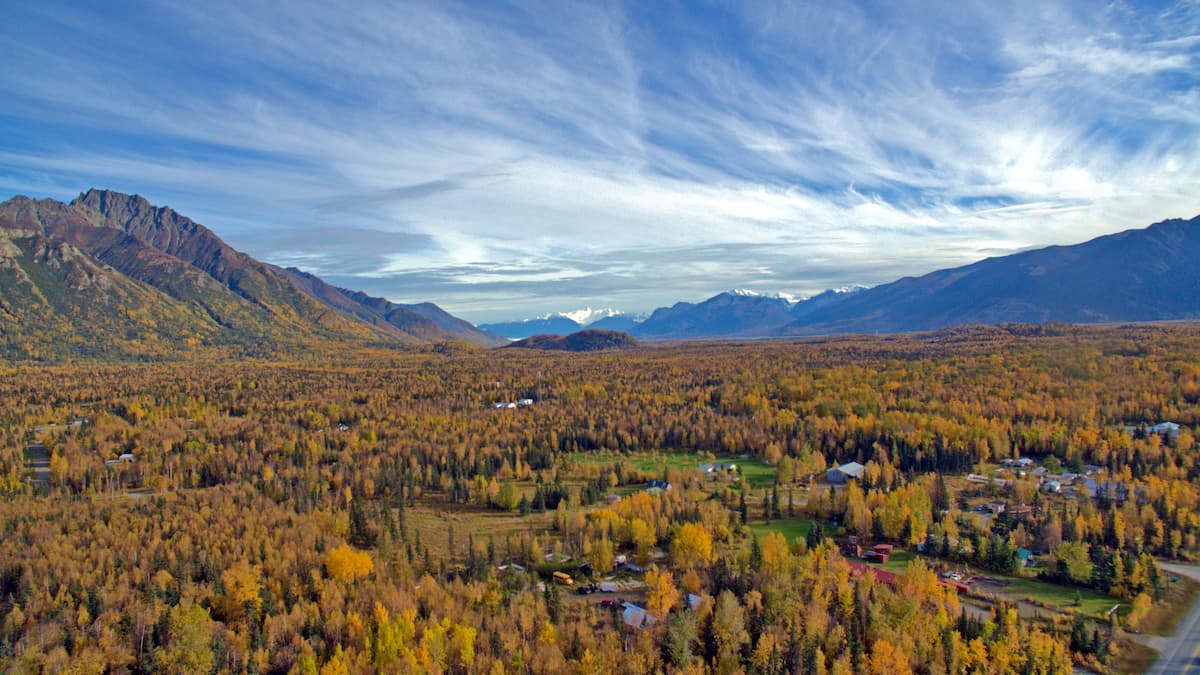 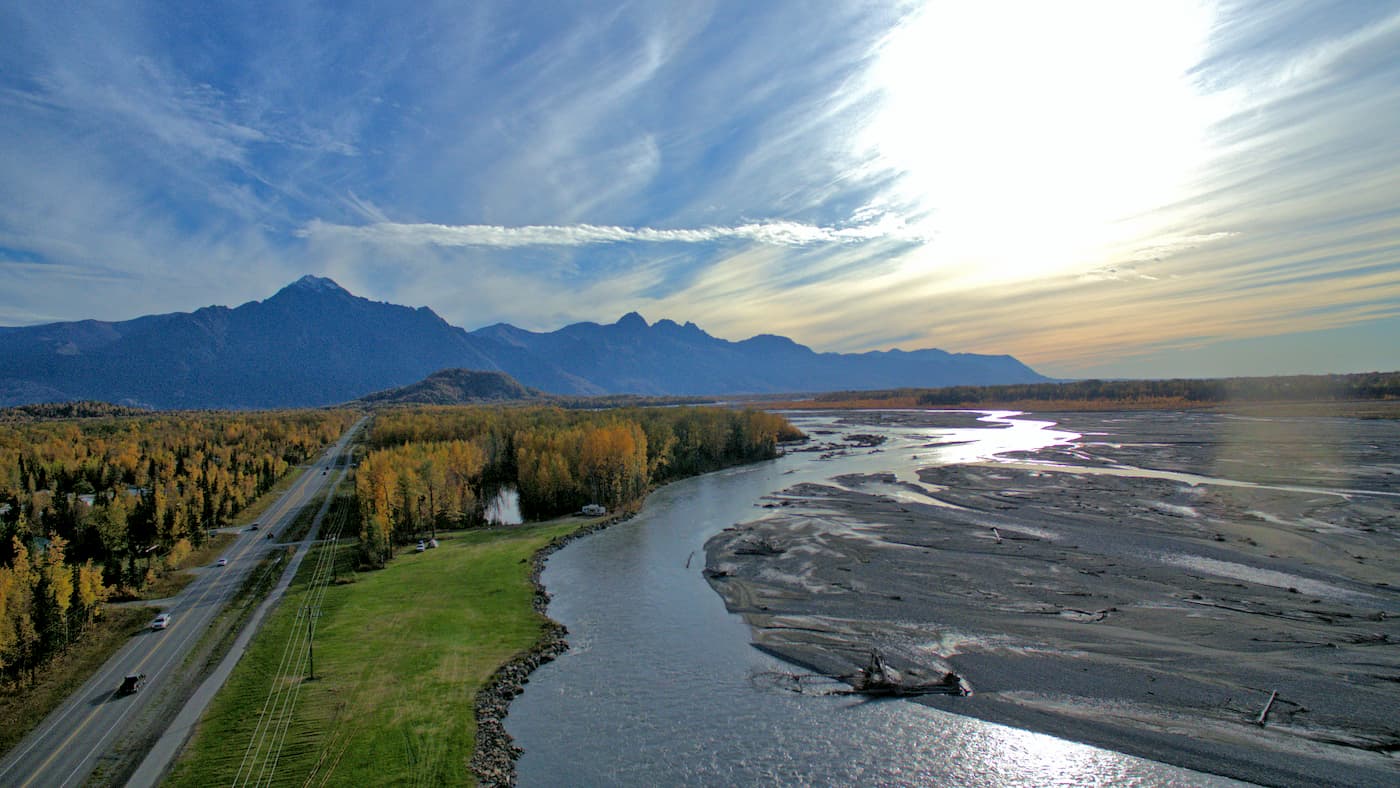