The Snake River Range is a wild, scenic mountain range on the border of the US states of Idaho and Wyoming that’s home to 54 named mountains. The highest peak in the range is Mount Baird at 10,030 ft (3,057 m) in elevation and the most prominent mountain is Observation Peak at 9,967 ft (3,038 m) in elevation. 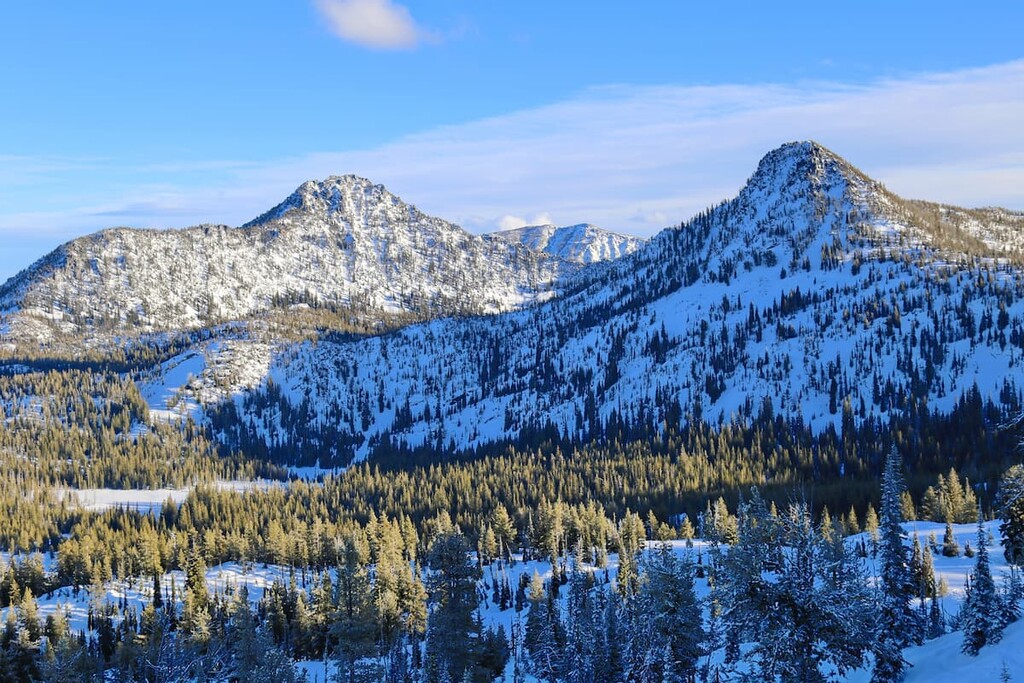 The Snake River Range runs for about 50 miles (80 km) in a northwest-southeast direction, straddling the Idaho/Wyoming border to the south of the Teton Range. Most of the range lies within the Caribou-Targhee National Forest and the Bridger-Teton National Forest.

The range is bordered by the Tetons and the Teton Valley to the north and the Snake River and Palisades Reservoir to the southeast. The Snake River Canyon forms the southern boundary of the range.

The area of the Snake River Range that is often called the Greater Palisades or the Palisades Backcountry is one of the premier roadless areas in the Greater Yellowstone Rockies. Over 200,000 acres (80,900 ha) of the range is completely roadless and is designated as a wilderness study area.

There are only two major paved roads crossing the Snake River Range, so access is limited and much of the range is minimally visited, especially compared to the world-famous hikes in nearby Grand Teton National Park.

Technically, the Big Hole Mountains and the Snake River Range are listed as separate mountain ranges by US Geological Survey (USGS) cartographers. However, the ranges are geologically and physically part of the same chain of peaks.

The Snake River Range is part of the Greater Yellowstone Rockies, a subsection of the 3,000 mile (4,800 km) range that begins in British Columbia in Canada and runs south all the way into New Mexico in the US.

The Snake River subrange is part of the Overthrust Belt, one of the most geologically complex areas of the Rockies. The Overthrust Belt is a region of very thick sedimentary rocks that have undergone intensive folding and thrust faulting, resulting in complicated stratification containing difficult-to-reach oil and gas deposits.

Geologists believe that the Overthrust Belt originated as part of the Sevier orogeny, which partially took place during the Cretaceous period. Sometime in the last 150 to 50 million years, a layer of sedimentary rock along the west coast began to move eastward. When it encountered another rock formation in the way, the sedimentary layer began to slide over the rock in place, creating the complicated, pocketed thrusting and folding we see today in the area today.

The Snake River Range was shaped most recently by glaciers, which left cirques and glacial lakes, particularly on the west side of the range. The soft sedimentary rock that makes up the mountains is unstable and rockslides are relatively common here. Both the upper and lower Palisades Lakes were created by slides.

The landscape in the Snake River Range varies from dense forests to wide open, high alpine meadows. At lower elevations, subalpine fir, Engelmann spruce, and Douglas fir trees are common. There are also pockets of deciduous trees, including stands of aspens and bigtooth maple.

Higher elevations in the Snake River Range often feature wide-open avalanche meadows filled with wildflowers, including lupine, coneflower, penstemon, and monkshood. These plants, which bloom in July and August, often grow so thick that they obscure trails at the end of the summer.

The Snake River corridor bordering the mountains is also considered some of the best wildlife habitat in all of Idaho, as it is home to a Blue Ribbon trout fishery and popular big game hunting areas. Bald and golden eagles are particularly common along the river.

With its massive roadless area, the Snake River Range makes a great habitat for large wildlife including elk, moose, mule deer, bighorn sheep, coyotes, and black bears. Naturalists anticipate that grizzly bears and wolves, which were reintroduced to Yellowstone National Park in 1995, will eventually range through the area.

People have lived in the area around the Snake River Range for at least 11,000 years. There’s extensive evidence of seasonal use by prehistoric people around the range, including obsidian quarry sites near Teton Pass.

Many Indigenous communities lived in or visited this area prior to European contact, including the Blackfoot, Crow, Flathead, Gros Ventre, Nez Perce, Shoshone, and Bannock. The Shoshone are most commonly associated with the area.

These tribal nations and communities moved seasonally, coming to the mountains in the summer to hunt big game and fish, then seeking milder climates at low elevation during the winter months.

European and Euro-Americans first began to arrive in the area in the early 1800s with Lewis and Clark’s expedition, followed by small groups of fur trappers. By the end of the century, larger numbers of settlers from the US East Coast were moving into the area, encroaching on indigenous communities’ traditional lands and ways of life.

By the early nineteenth century, the tribal nations had been removed from the area and forcibly relocated to reservations in Wyoming and Idaho. Today, many descendants of the original inhabitants of the Snake River Mountains are enrolled members of the Eastern Shoshone Tribe on the Wind River Reservation in Wyoming, or the Shoshone-Bannock Tribes of the Fort Hall Reservation in southeastern Idaho.

Some of the first Euro-American settlers in this region were Mormons, who farmed near the Snake River Range before transitioning to more profitable cattle ranching. While cattle grazing is no longer allowed in many protected parts of the range, ranching (including cattle ranches and dude ranches oriented towards tourism) is still a major industry in the broader region.

Congress has not yet taken action to preserve the Snake River Range as an official wilderness area. There’s an ongoing debate in Wyoming and Idaho about competing land uses in the area and the future of the Palisades Wilderness Study Area.

Teton Pass on Route 22 is a popular destination for visitors to Jackson Hole. Views from the top of the pass are excellent, but the trailheads here lead to even more spectacular views.

If you want a short hike off Teton Pass that will still take you to great views, hiking Mount Elly is a great choice. The hike leads south off Route 22 and climbs steadily but moderately to the summit of unofficially-named Mount Elly. This trail is also popular with mountain bikers, so expect to share it with other recreationalists.

The Taylor Mountain Trail is a challenging hike off Teton Pass that leads to the summit of Taylor Mountain, one of the tallest peaks around the pass. The first portion of the trail climbs moderately through wildflower meadows along a creek, then the trail turns and climbs steeply up Taylor Mountain.

The Palisades Reservoir is popular for fishing and boating, but there are lots of great hiking trails in the area.

The Big Elk Creek trail begins off Route 26 on the eastern side of Palisades Reservoir and continues deep into the wilderness, eventually connecting with Mosquito Creek Road. This hike leads to a three-way junction, following Big Elk Creek for a moderate day hike. There are several water crossings that can be difficult when the water level is high. Be aware that dogs and horses are also allowed on this trail.

The Indian Creek Loop makes a great long day hike or overnight hike. The loop starts near the eastern shore of Palisades Reservoir and climbs to nearly 9,500 ft (2,895 m) in elevation, with an optional side trip to summit nearby Observation Peak, the most prominent mountain in the Snake River Range and the second-highest peak overall.

This partial loop trail starts outside of Driggs in Bates, Idaho. The Monument Peak and Garns Mountain loop climbs to its highest point on Garns Mountain, with optional side trips to Temple Peak and Prospect Peak.

The Black Canyon Trail starts on the southwestern side of the Big Hole Mountains on the bank of the Snake River and makes a circuit around Wheaton Mountain. The trail isn’t located off a main road, so it’s less trafficked than many of the other trails in the area.

While the loop is relatively moderate, it connects to more challenging trails over some of the higher peaks in the Big Hole Mountains.

Looking for a place to stay near the Snake River Range? Here are some of the best towns to check out in the region:

Jackson is an international mountain destination, with high-end shops, restaurants, and hotels alongside some of the best hiking and skiing in North America. The town is bordered by a national elk refuge and moose and elk sightings are common on the roads outside town.

Jackson is home to a world-class ski resort named Jackson Hole, and the town serves as the gateway to Grand Teton National Park and the broader Yellowstone area. Jackson is also the seat of Teton County, the wealthiest county in the country as measured by per capita income.

Driggs, Idaho is located over Teton Pass on the west side of the Teton Range. While it’s less developed and touristy than Jackson, the town sees plenty of visitors and has lots of hotels and restaurants for tourists.

Alpine, Wyoming is a small town located at the southern tip of Palisades Reservoir and the southern end of the Snake River Range. For a small town of just under 1,000 people, Alpine offers plenty of amenities for tourists and lots of attractions.

The Palisades Reservoir is popular for boating and fishing, and the town is located right next to the Snake River Canyon, a major summertime attraction. Alpine is a great alternative to touristy Jackson if you’re looking to explore the southern end of the Snake River Range.