The Salmon River Mountains are a collection of peaks located in the central part of the US state of Idaho. The pristine Salmon River winds through its namesake mountain range. There are 391 named peaks in the range. The tallest and most prominent peak is White Mountain West at 10,443 ft (3,183 m) of elevation and with 3,766 ft (1,148 m) of prominence.

Situated in central Idaho, the Salmon River Mountains are a collection of peaks located to the south of the Salmon River. The range is 106 miles (171 km) long and 122 miles (196 km) wide.

In total, the range encompasses 8,900 sq. miles (23,000 sq. km) of land. The peaks are a subrange of the greater Rocky Mountains. There are three subranges within the Salmon River Mountains: West, Central, and East.

The Salmon River and the Payette River run through the range, attracting whitewater rafters from across the nation. Much of the landscape is heavily forested with steep canyons and hillsides throughout the region.

Craggy peaks tower above the landscape in the Salmon River Mountains with five mountains reaching over 10,000 ft (3,048 m) in elevation. Alpine meadows and lakes are also scattered throughout the range, though many are located within the Frank Church-River of No Return Wilderness.

The thick forest covers the abrupt changes in elevation. Though the northwestern stretches of the range are just 30 miles (48 km) from the city of Lewiston, the range is often thought to be one of the most remote and rugged stretches of land in the lower 48 states.

Surrounding ranges include the White Knob Mountains, Boulder Mountains, and the Pioneer Mountains. Elevations within the Salmon River Mountains increase from west to east, thus the tallest peaks in the range are all located in the eastern subrange.

The Salmon River Mountains are a subrange of the Bitterroot Range of the Idaho-Bitterroot Rocky Mountains. These peaks began forming during the Laramide orogeny, around 80 to 55 million years ago.

During this time, the Farallon plate was subducted beneath North America’s west coast as the Idaho Batholith was uplifted and eroded away. Immense pressure and thrust faulting pushed the land further upward, forming the rugged landscape that we see today.

The Salmon River Mountains were heavily glaciated during the Pleistocene. As the glaciers slowly retreated, they eroded the landscape, creating many of the cirques and geological features that the region is known for.

The Salmon and Payette rivers further eroded the region, carving the deep valleys seen throughout the range. The drastic changes in elevation in the region were also caused by geological features such as the Salmon River.

The Salmon River further winds through the entire range before connecting with the Snake River in western Idaho. The canyons throughout the range are what make the mountains feel like such a remote landscape.

The Salmon River Mountains are rich in minerals and are home to famous deposits of gold. The range consists primarily of granite, whose continual erosion has given the peaks their distinctive rugged appearance.

The Salmon River Mountains are part of the Idaho Batholith ecoregion. The forested hillsides and raging rivers of the range allow for both flora and fauna to thrive.

The dense forest that is found throughout the range is composed primarily of ponderosa pine, Douglas fir, lodgepole pine, whitebark pine, and small patches of Engelman spruce. The alpine regions are home to various grasses and wildflowers.

Animals can be found in the range from floors of the narrow valleys, up to the summit of the tallest peaks. Over 370 species have been identified in the range so far.

Wild turkeys and eagles are common large bird species in the range. A small population of wolverines inhabits the region, helping provide the protected habitat that the elusive species needs to thrive.

The waterways of the Salmon River Mountains are also home to populations of squawfish, sucker, smallmouth bass, mountain whitefish, and cutthroat trout.

The Salmon River Mountains have been home to humans for thousands of years. Indeed, the region is part of the ancestrals homelands of many Indigenous peoples, including the sovereign nations of the Nez Perce Tribe (Nimiipuu) and the Shoshone-Bannock Tribes whose ancestors have lived in the region since time immemorial.

Some of the earliest peoples of European descent to visit the region were French and British fur trappers and traders.

Additionally, the Lewis and Clark expedition traveled across the region in the early 1800s. The expedition’s arrival in the region soon resulted in displacement and genocide of Indigenous peoples as other settlers followed in their footsteps. Settler populations grew throughout the region as the trapping, mining, ranching, and logging industries became further developed.

The Sheepeater Indian War took place in the region in 1879, making it one of the last wars fought by the United States against a tribal nation. Much of the battle took place within central Idaho, near the Salmon River Mountains.

The war started after European-American settlers accused members of the Tukudeka of stealing from them and later killing multiple prospectors and miners. While there was no evidence for these accusations, they started a war that lasted a little more than a month.

The national forests surrounding the Salmon River Mountains were established after the signing of the Forest Reserve Act of 1891. Various forest reserves were established in the region during decades that followed.

In 1931, over 1 million acres (404,600 ha) of land in Central Idaho were declared as The Idaho Primitive Area. Three decades later, in 1964, Frank Church, the senator from Idaho, helped sponsor and pass the Wilderness Act, paving the way for the creation of the National Wilderness Preservation System.

In 1980, Congress also passed the Idaho Wilderness Act. This established the Selway-Bitterroot Wilderness and created the River of No Return Wilderness.

However, in 1984, Congress decided to rename the River of No Return Wilderness as the Frank-Church River of No Return Wilderness in honor of the senator who had died earlier that year. Indeed, Church’s work was instrumental in helping to pass the act that established the wilderness in the first place. His efforts helped ensure that the Salmon River could flow freely through the region.

The Salmon River Mountains are home to thousands of miles of hiking trails. Here are some of the most popular hiking areas in the range:

The Frank Church-River of No Return Wilderness is a pristine landscape that encompasses much of the Salmon River Mountains. The wilderness spans into many of the surrounding national forests, and is the largest contiguous wilderness in the country outside of Alaska.

Many of the major hikes within the wilderness showcase its remote and rugged beauty. Popular routes include treks to the Bear Valley Hot Springs, Loon Creek, Middle Fork Salmon River, and Cathedral Lake.

The Boise National Forest lies at the southern end of the Salmon River Mountains. Within the forest lie sections of the Boise, Salmon River, and West Mountains. There are over 15,000 acres (6,070 ha) of lakes and reservoirs throughout the forest.

Over 1,300 miles (2,100 km) of hiking trails can be found throughout Boise National Forest. Its close proximity to the city of Boise make it a popular destination for hiking, mountain biking, off-roading, and running. Popular trails include Freddy’s Stack Rock Trail, Adelmann Mine, Red Cliffs Nature Center Trail, and Blue Lake Trail.

The Salmon-Challis National Forest is situated on the eastern edge of the Salmon River Mountains. It is home to some of the highest peaks in the range. Encompassing over 4.2 million acres (1.6 million ha) of land, the forest is one of the largest national forests in the contiguous United States.

Looking for a place to stay near the Salmon River Mountains? Here are some of the best cities and villages to check out in the region:

The city of Boise lies just south of the Salmon River Mountains. Boise is the capital city of Idaho and, with a metro population of 750,000, it is also the most populous city in the state.

During the summer months, Boise is a mecca for outdoor activities. Hiking, mountain biking, fishing, skiing and floating the river are all popular activities that you can do within close proximity to downtown.

Each year, the city hosts a Shakespeare Festival during the summer. Local restaurants, breweries, and wineries are dotted throughout the city, making it a great place for foodies, too. Boise is also home to the Spirit of Boise Balloon Classic, a hot air balloon festival.

McCall is a small resort town located on the western edge of the Salmon River Mountains. The town lies along the shores of Payette Lake within the Payette National Forest. McCall was once a logging community but has since become a year-round resort town centered around outdoor recreation.

Hiking, mountain biking, and whitewater rafting are popular activities during the summer months in McCall. Once winter rolls around, the town transforms into a hub for downhill skiing, snowboarding, snowmobiling, and nordic skiing. Plus, since it’s surrounded by national forest, McCall is the ideal town for nearly any adventure. 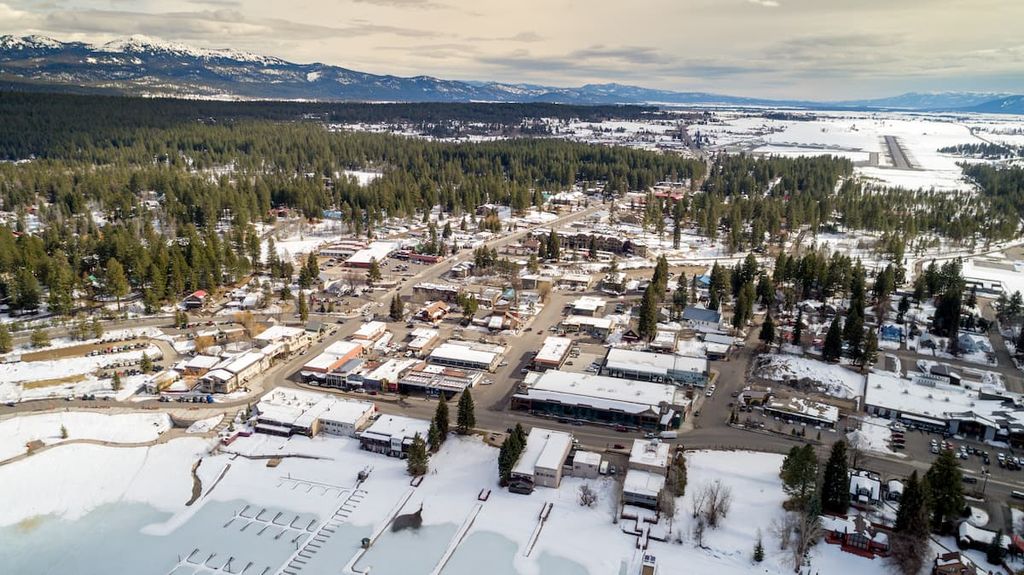 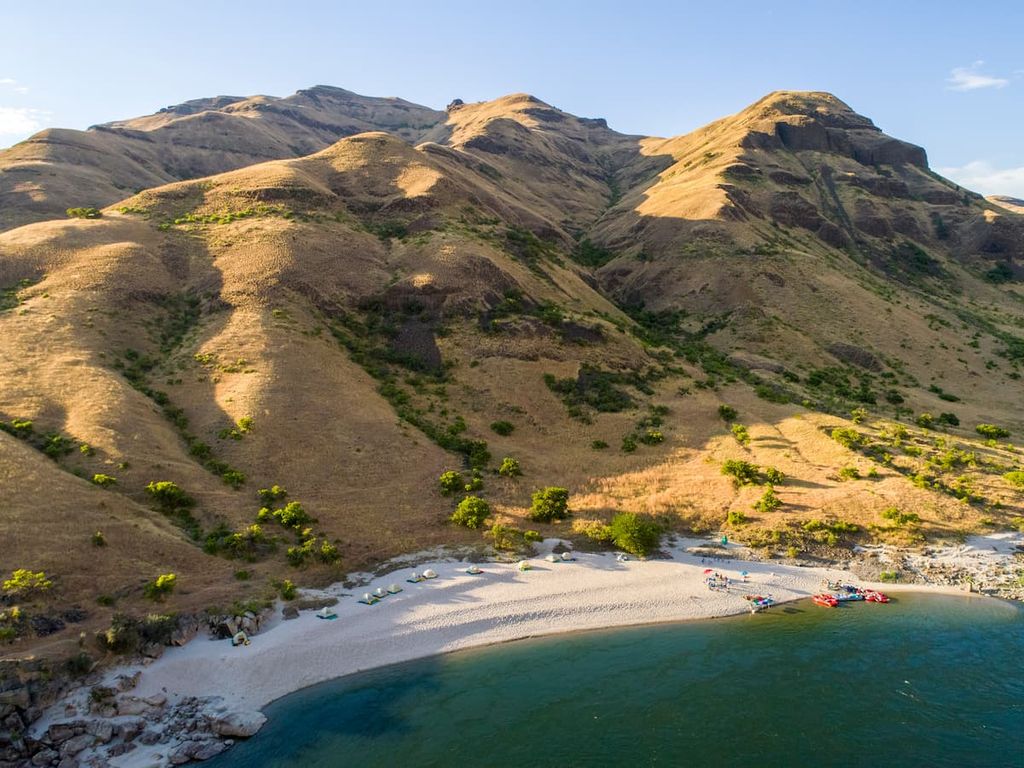 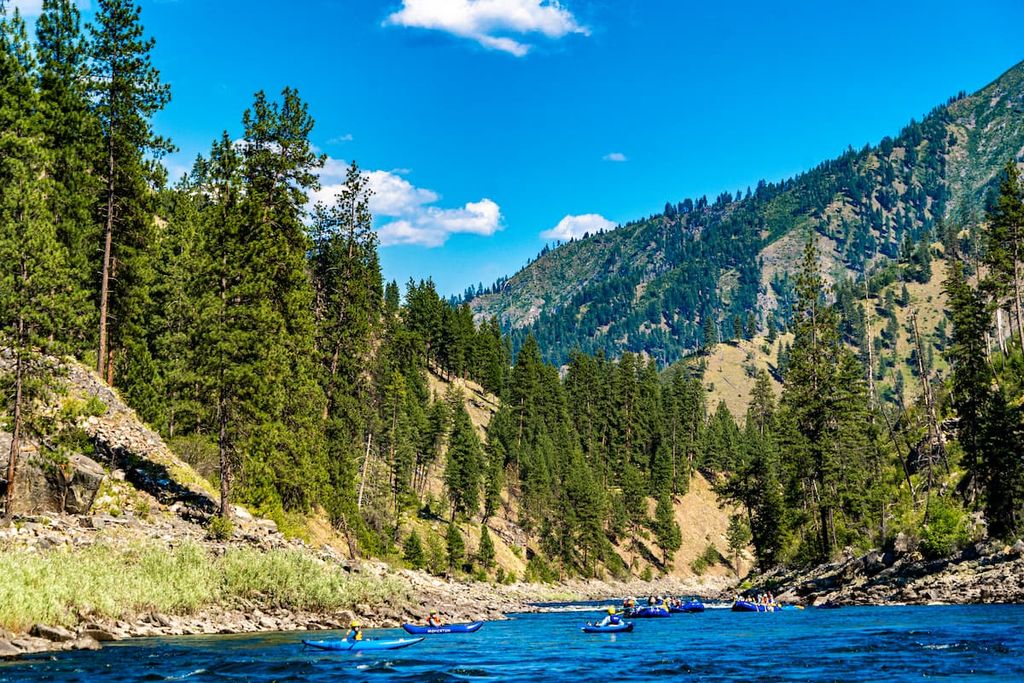 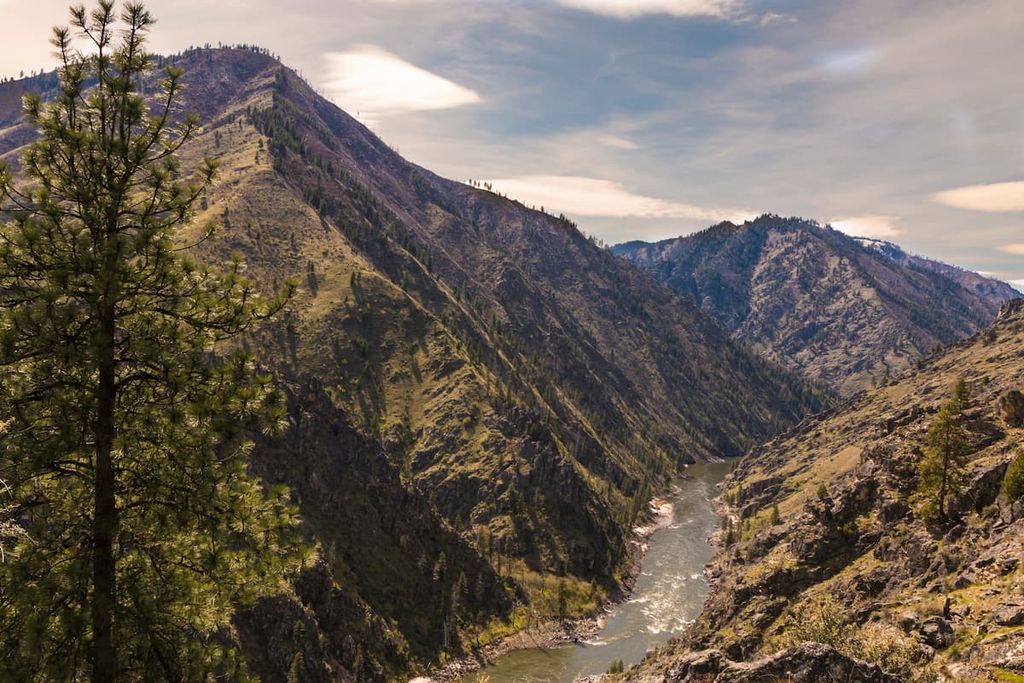 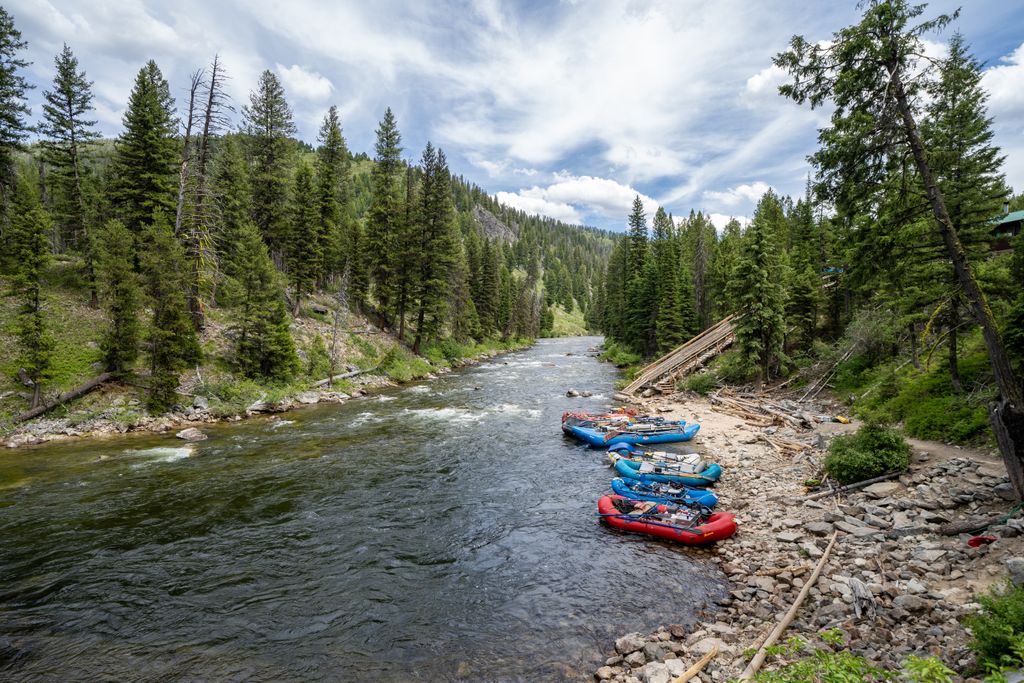 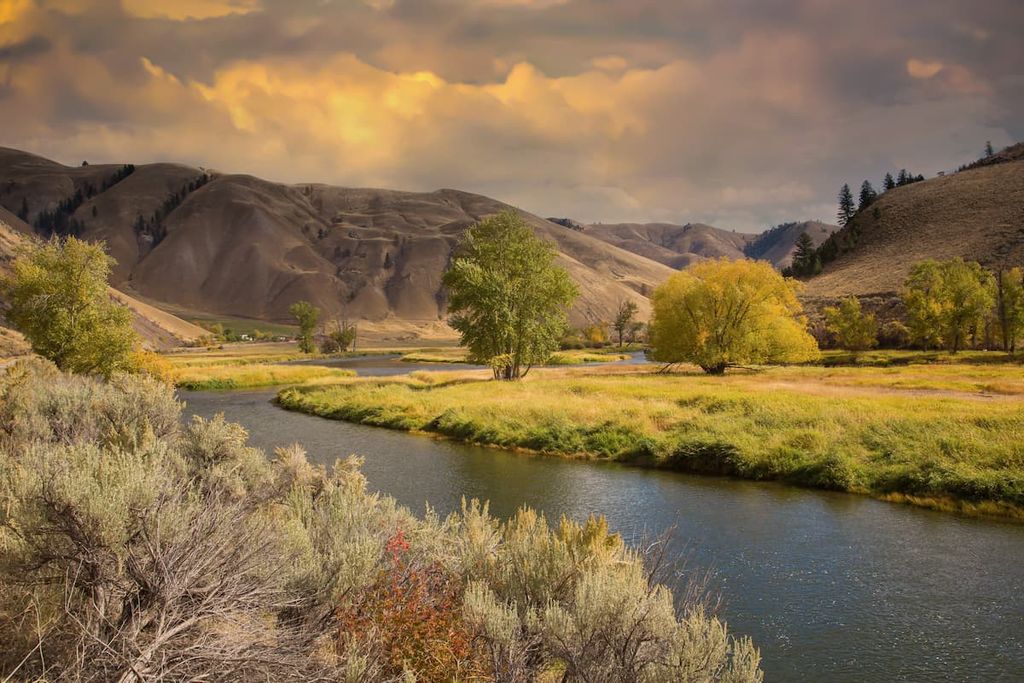 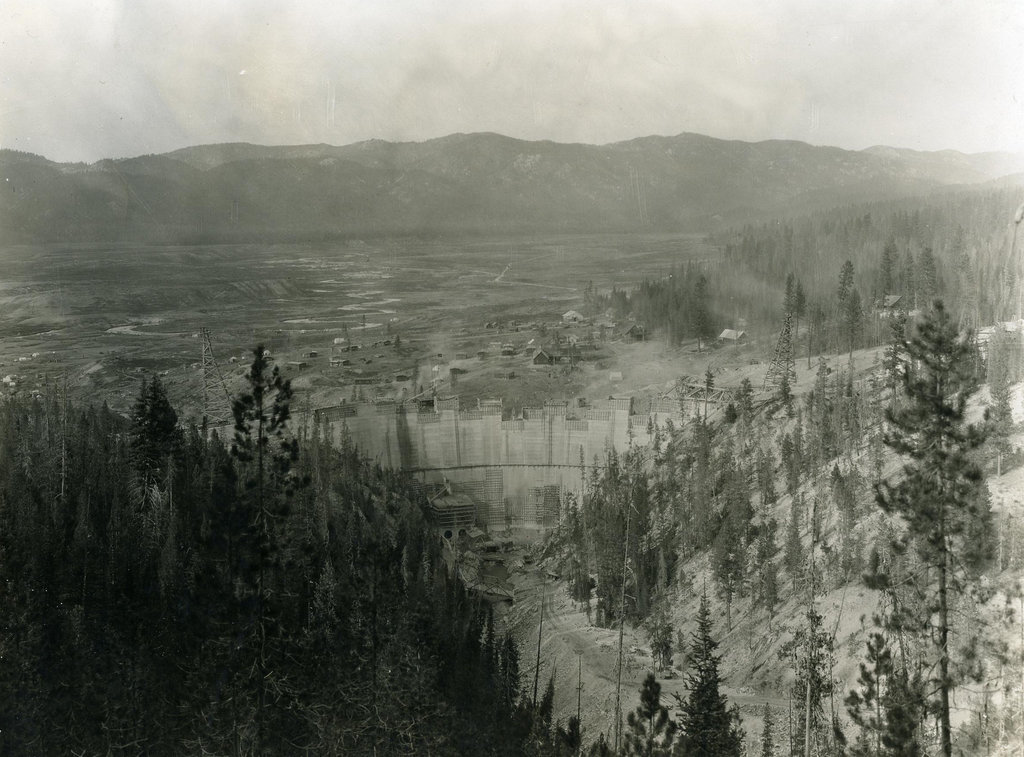