The Ouachita Mountains are a mountain range that extends for roughly 225 miles (362 km) through the US states of Arkansas and Oklahoma. There are 813 named mountains in the Ouachita Mountains. The highest peak in the range is Magazine Mountain and the most prominent is Signal Hill.

Together, the Ozark Plateaus and the Ouachita Mountains form the US Interior Highlands, a mountainous region that stretches from northern and western Arkansas and southern Missouri to eastern Oklahoma and southeast Kansas.

Due to their orientation, the Ouachita Mountains contain an extensive south-facing slope on each ridge that is regularly exposed to heat and sunlight, and a much cooler north-facing slope that’s protected from direct sunlight.

Geographically, the Ouachita Mountains stretch roughly 225 miles (362 k) from Little Rock, Arkansas to Atoka, Oklahoma. Due to extensive faulting and folding, however, the Ouachitas are often subdivided into smaller ranges that are separated by ridges and broad valleys.

Within the Ouachita Mountains, there are dozens of national parks, state parks, designated wilderness areas, and wildlife management areas. Some of the most popular protected areas in the range include:

Moreover, many geologists agree that the Appalachians and Ouachita Mountains were likely once part of the same colossal mountain chain.

About 200 million years ago, during the Early Mesozoic, Pangea began to break apart and the Ouachita Mountains were separated from the Appalachians by a series of low-lying valleys.

The bedrock of the Ouachita Mountains is unique for the region in that it does not preserve much evidence of igneous intrusions, volcanism, or regional metamorphism. Sedimentary rock in the Ouachita Mountains is predominantly marine shales, sandstone, and chert. Novaculite, a fine-grained quartz rock made almost entirely of pure silicon dioxide, is also a valuable resource that’s found in the region.

The Ouachita Mountains are part of an interesting ecoregion that covers about 18,000 square miles (46,620 sq. km) of Arkansas and Oklahoma. The region’s complex geological history has created a tremendous diversity of plant and animal habitats in the Ouachitas.

The Ouachita Mountains region is home to more than 40 endemic species, more than a third of which are aquatic. Lakes and streams provide an ideal habitat for over 150 native fish species, while the region’s ridges and valleys sustain large populations of white-tailed deer, fox, squirrels, coyotes, and other temperate forest animals.

Historically, bison and elk were known to roam the Ouachita Mountains region, but they have since been extirpated. Moreover, about 24 animal species that once thrived in the region have become extinct due to overhunting, widespread harvesting, and habitat loss. Black bears were reintroduced to the Ouachita Mountains region in the 1960s but are still rarely seen in the range.

Post oak and shortleaf pine dominate the dry, nutrient-poor, upland areas of the Ouachita Mountains. Maple-leaf oak (Quercus acerifolia), a rare tree species that is found in the wild at only a handful of sites in the world, grows in a few upland forest areas in the Ouachita National Forest.

Archeological evidence unearthed in the Ouachita National Forest, including fire pits, house walls, and fire-cracked rock, suggests that the Ouachita Mountains region has been inhabited since the Middle Archaic period (about 6000 BCE).

The Ouachita Mountains region is part of the ancestral homelands of the Caddo people, who traditionally lived throughout the Red River Valley in Oklahoma, Texas, Arkansas, and Louisiana.

When the first European colonizers arrived in the Ouachita Mountains region in 1541, thriving Caddo communities were distributed along the Brazos, Trinity, Neches, Sabine, Red, and Ouachita rivers. By the end of the seventeenth century, there were at least sixteen separate Caddo communities in the region.

Caddo groups are generally referred to as villages, bands, or tribes, but their relationship to one another is still poorly understood. The Ouachita tribe, for which the Ouachita Mountains are named, lived along the lower reaches of the Ouachita River.

French-Canadian colonizers are believed to have first contacted the Ouachita people sometime in the 1700s. By the 1720s, the Ouachita had assimilated into the Natchitoches tribe.

Early French settlers gave many of the natural features and attractions in the Ouachita region the names that we use in English today. The name Ouachita and pronunciation “Wah-sha-taw,” for example, is believed to derive from the French word washita, which roughly translates to “good hunting grounds.”

In 1803, the US acquired roughly 828,000 sq. mi (2,144,550 sq. km) of land from France during the Louisiana Purchase, most of which was inhabited by Indigenous peoples. For the next four decades, the US government forced Indigenous peoples off of their homelands and forcibly relocated them to the west, primarily to Oklahoma, along what would later be known as the Trail of Tears.

The Trail of Tears stretched over 5,000 miles (8,047 km) across nine states. Today, several parks and trails in the Ouachita Mountains region lie along or near these historic removal routes, including Mount Nebo State Park, Petit Jean State Park, and Pinnacle Mountain State Park.

Best Hikes in the Ouachita Mountains

The Ouachita Mountains are a haven for outdoor recreation. These are some of the best hiking areas to check out:

The Ouachita National Forest covers over 1.8 million acres (728,434 ha) of land across Arkansas and Oklahoma. This massive forest not only protects most of the Ouachita Mountain Range, but also contains one of the largest old-growth forests in the continental US.

Best-known for its 47 geothermal pools, Hot Springs National Park is the oldest park managed by the National Park Service as it was first created in 1832. The park covers over 5,000 acres (2,023 ha) of land, boasts more than 30 miles (48 km) of scenic hiking trails through the Ouachita Mountains, and protects the greatest collections of bathhouses in North America.

Here, springs flow from the western slope of Hot Springs Mountain. The hot water from these springs is dispersed to various bathhouses across Bathhouse Row, which is a designated National Historic Landmark.

Popular trails and attractions in the park include the Arkansas River Overlook, Kingfisher Trail, Arkansas Trail at the Arboretum, Base Trail, and Rocky Valley Trail. Visitors can also take the West Summit Trail or East Summit Trail to the summit of Pinnacle Mountain.

Arguably one of the most unique state parks in the country, Crater of Diamonds State Park contains the world’s only known diamond-bearing site that’s accessible to the public. Diamonds have been mined in the area since 1906, well before the site became an official state park in 1972.

Today, visitors can hunt for diamonds and other semi-precious gems in the park’s 37.5-acre (15.2 ha) plowed field. According to the Arkansas State Parks, more than 34,000 diamonds have been found in the crater since it became a state park, including the largest diamond ever unearthed in the US.

The peak’s namesake state park covers about 2,200 acres (890 ha) of the mountain and contains more than 14 miles (23 km) of scenic hiking trails and outdoor attractions. Popular trails include the Signal Hill Trail, Mossback Ridge, and Will Apple’s Road.

Looking for a place to stay in the Ouachita Mountains? Here are some of the best cities to check out:

Home to roughly 35,000 residents, Hot Springs is the largest city in the Ouachita Mountains. Along with its namesake national park, Hot Springs is a renowned arts community and features a wide variety of unique accommodations and attractions.

Visitors to Hot Springs can stroll down Bathhouse Row, visit shops and restaurants along Central Avenue, or spend the night in the historic Arlington Hotel. Outdoor activities in the area include mountain biking, hiking, horseback riding, fishing, water sports, and digging for quartz crystals.

Located on the bank of the Arkansas River, Little Rock is a bustling community anchored by the Robinson Center Performance Hall and the William Jefferson Clinton Presidential Center and Park. At the heart of the city is the River Market District, where visitors will find an array of restaurants, shops, bars, museums, and hotels.

Situated just outside of city limits, Pinnacle Mountain State Park welcomes hikers, paddlers, cyclists, and rock climbers to travel through its more than 2,300 acres (931 ha) of beautiful terrain. For an in-town adventure, check out the Arkansas River Trail, which connects more than 15 miles (24 km) of paths and leads over the Big Dam Bridge.

Nestled along the banks of the Ouachita River, Arkadelphia (also known as Delph) is a town that’s home to just over 10,000 residents.

Arkadelphia is located near the Ouachita River and Caddo River, making it a popular destination for canoeing, kayaking, and fishing. Attractions located near the town include the DeGray Lake Resort State Park and the Iron Mountain Trail System.

Fort Smith lies on the Arkansas-Oklahoma state border at the confluence of the Arkansas and Poteau Rivers. In 1817, the US government established the city as a military outpost to patrol neighboring Tribal reservations.

Today, visitors to Fort Smith can learn about the city’s history firsthand at preserved historic sites and museums, including the Fort Smith National Historic Site and the Fort Smith Museum of History. 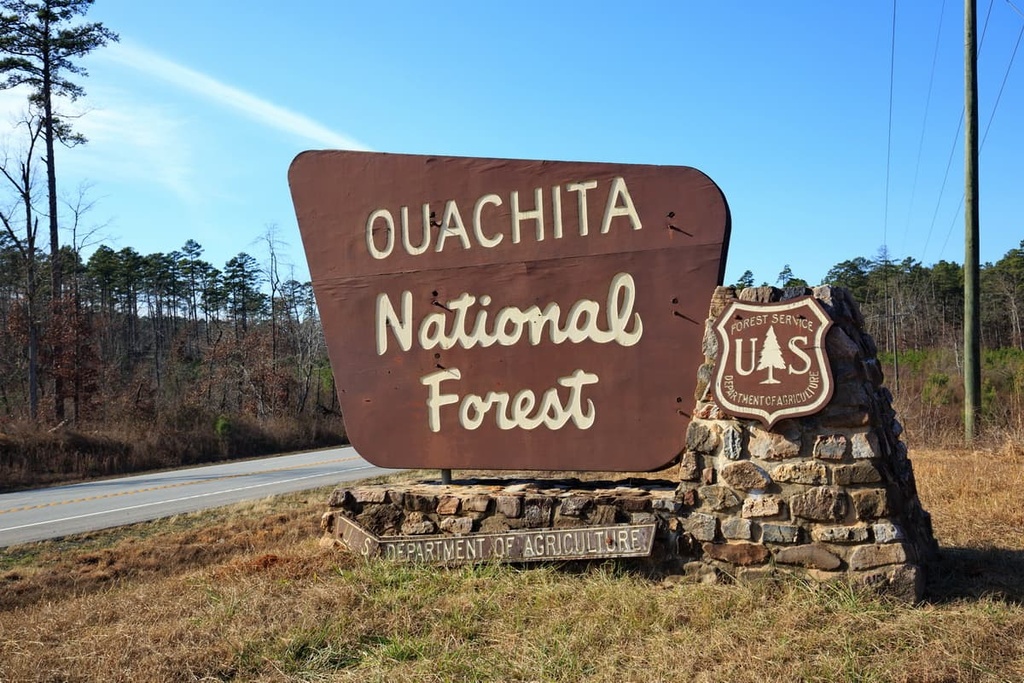 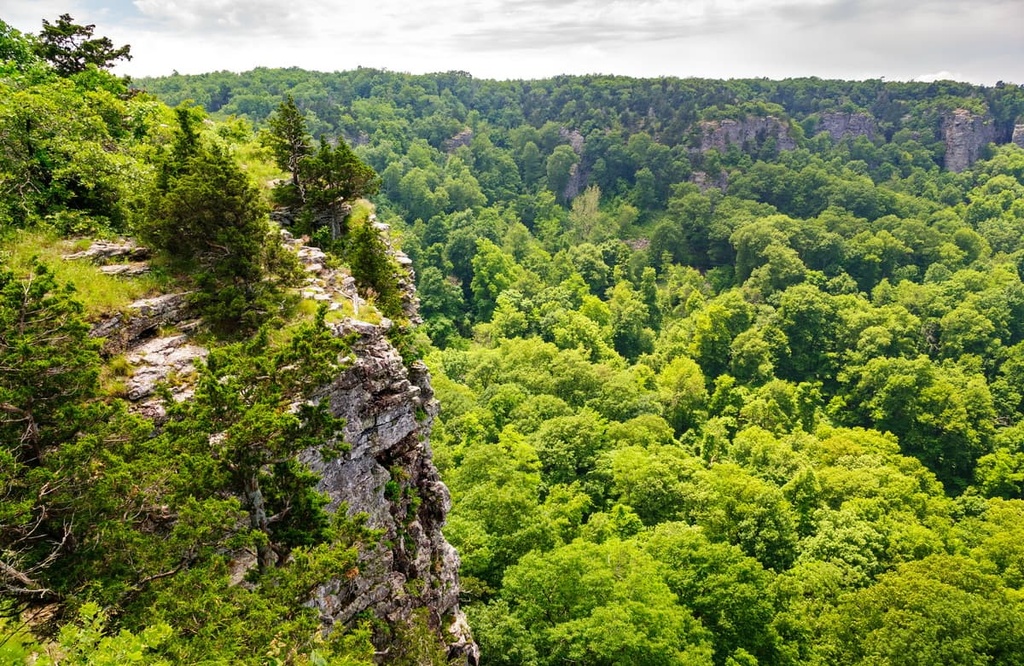 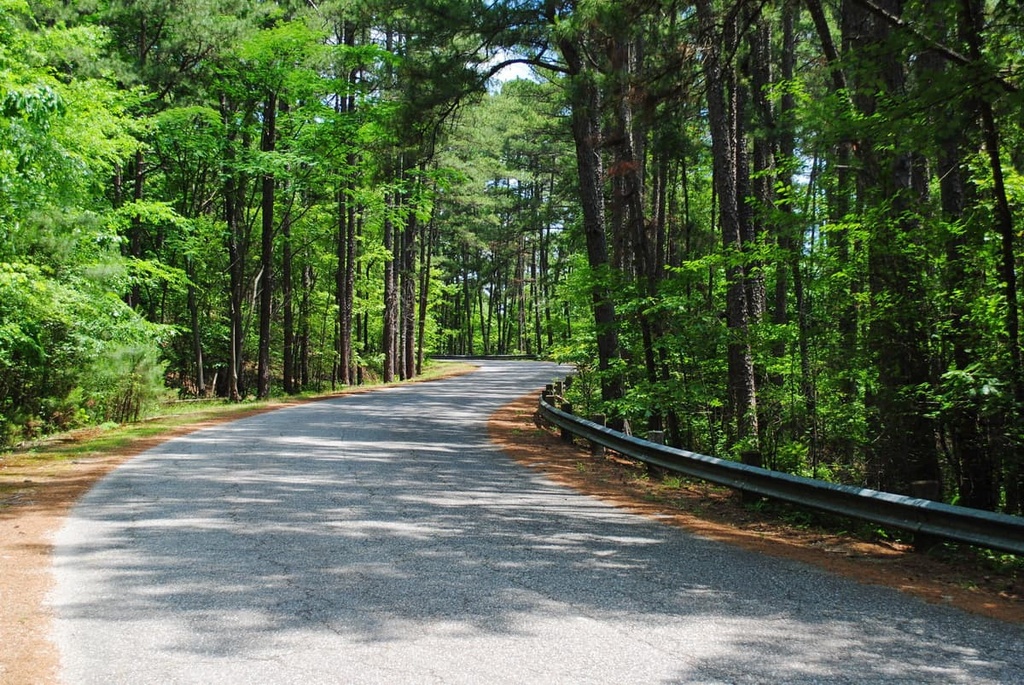 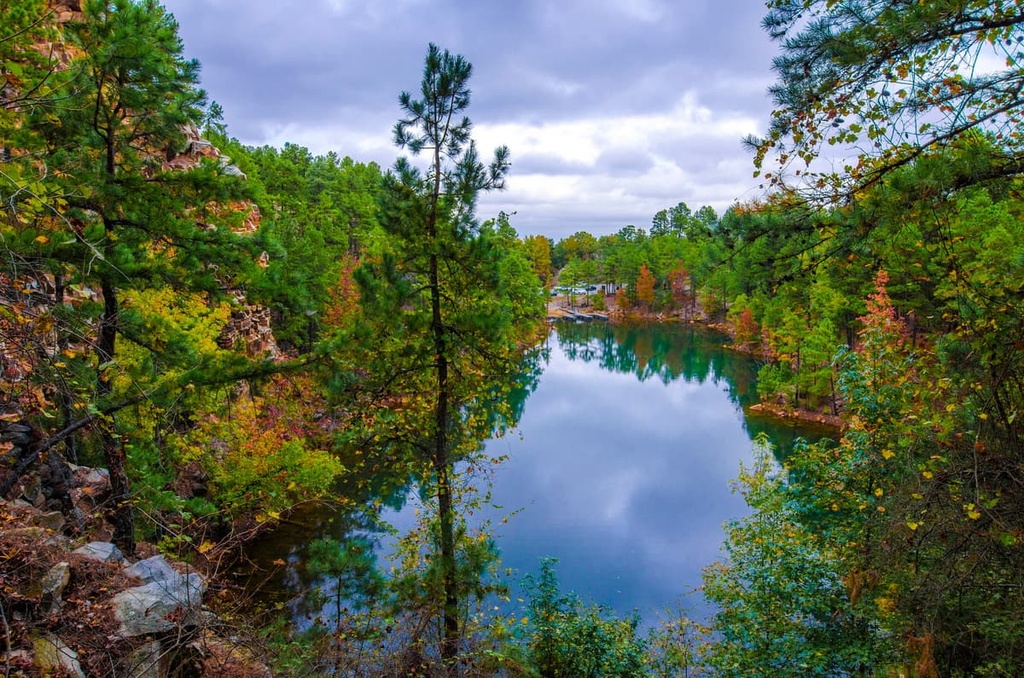 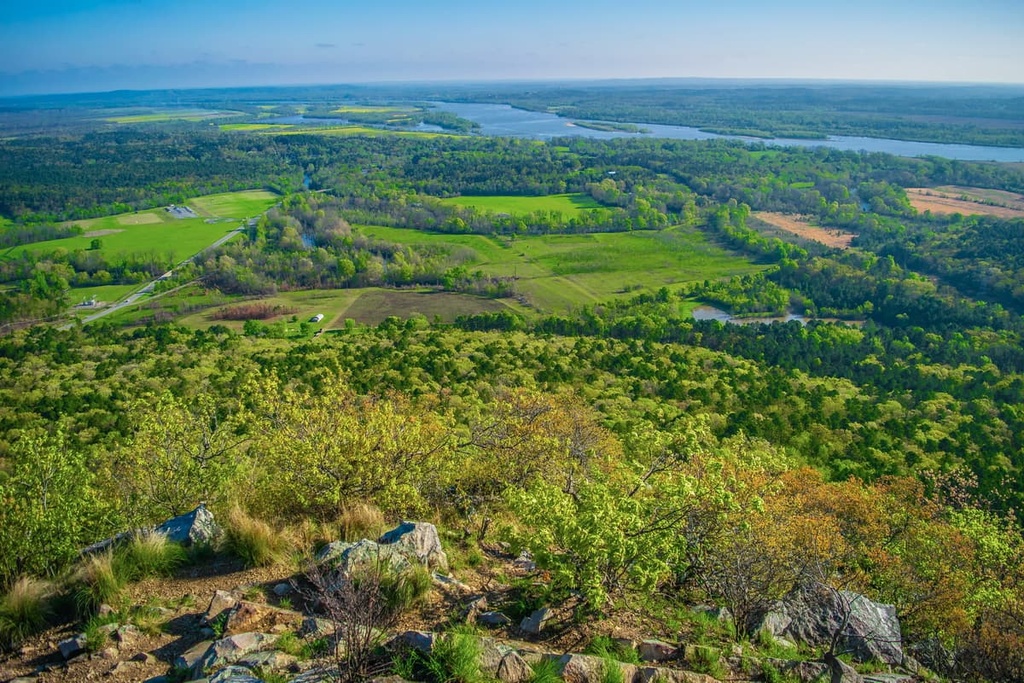 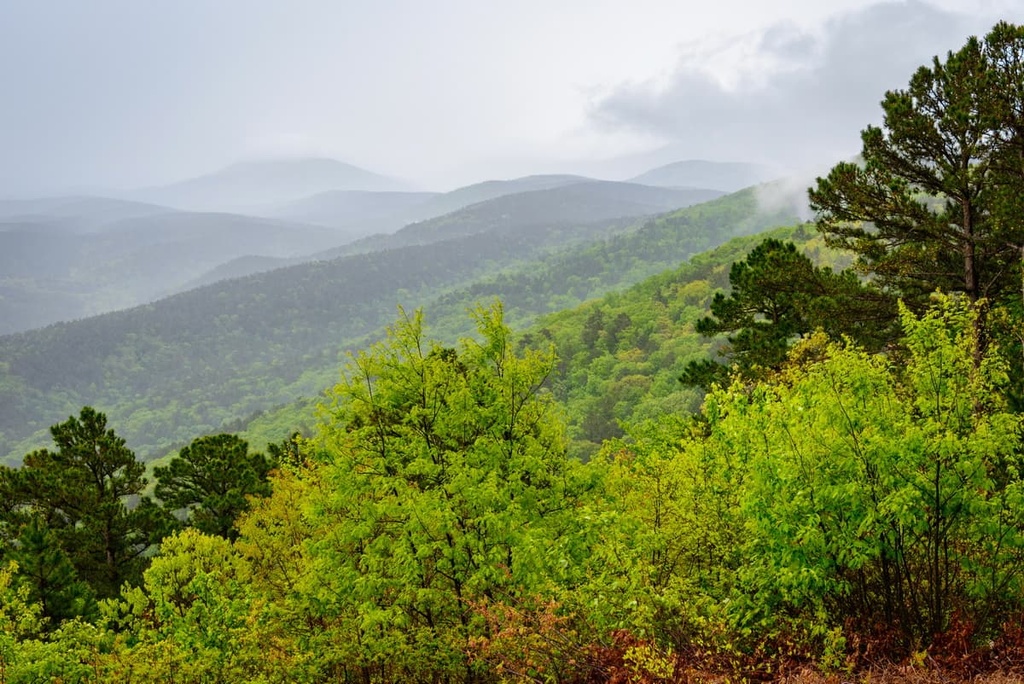 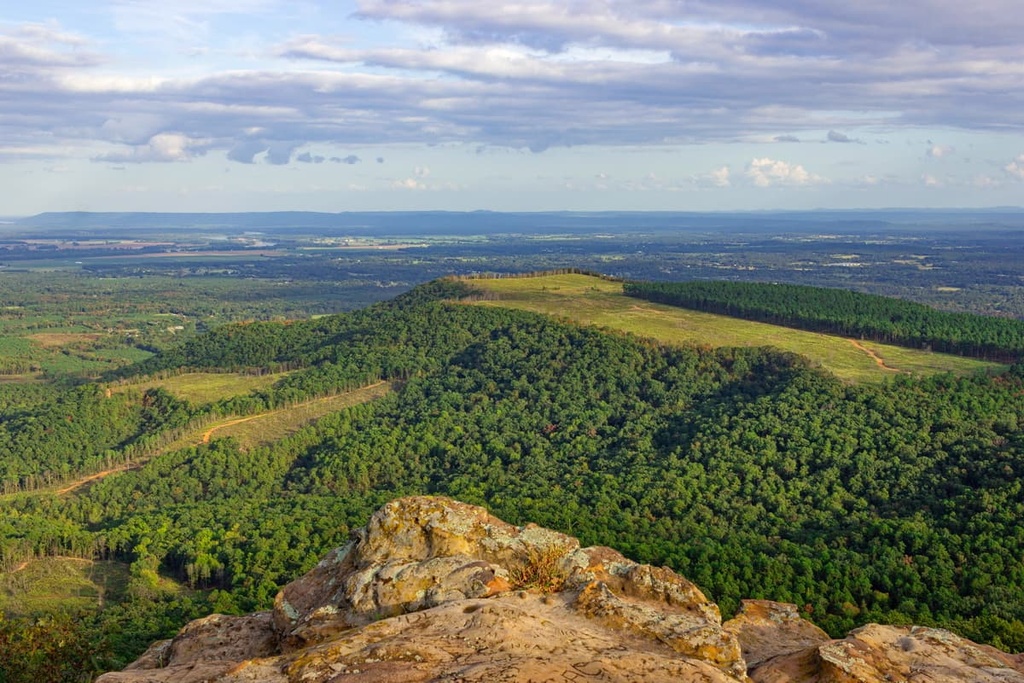