Ouachita National Forest is an outdoor recreation destination that’s located in the states of Arkansas and Oklahoma in the south-central US. This massive forest is home to one of the largest old-growth forests in the continental United States. Ouachita National Forest contains 386 named mountains, the tallest and most prominent of which is Rich Mountain (2,677 ft/816 m). 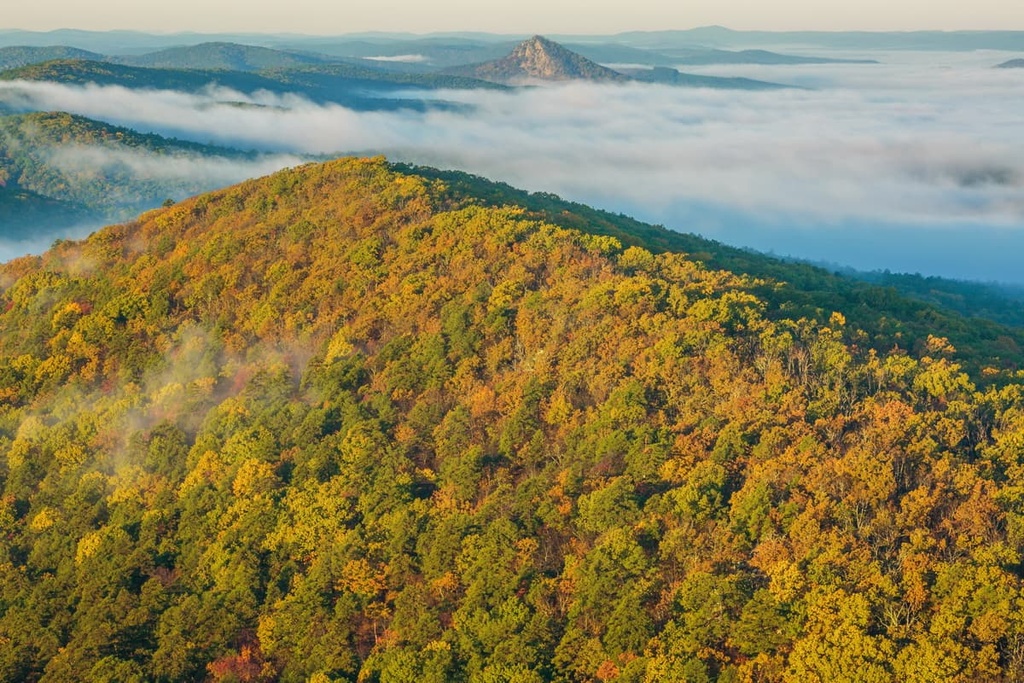 Ouachita National Forest is situated in western Arkansas and eastern Oklahoma in the US. The forest covers 2,788 sq. mi (7,221 sq. km) of land, the vast majority of which is located in Arkansas.

The Ouachita Mountains are almost entirely encompassed within the boundaries of the Ouachita National Forest. Forested rolling hills are the most distinct feature of the national forest while old growth forests dominate about 800,000 acres (323,750 ha) of land in Ouachita.

Rolling lowlands of the region give way to dry and steep slopes filled with stunted native trees. The Ouachita River runs throughout the park and the damming of the river created the reservoir known as Lake Ouachita.

Additionally, Ouachita National Forest is surrounded by other popular outdoor recreation areas. For example, Ozark-Saint Francis National Forest, Hercules Glades Wilderness, and Irish Wilderness all lie to the north of the forest.

The geological formation of the Ouachita Mountains is particularly extensive and diverse. Interestingly, the Ouachitas are an east-west trending mountain range, unlike a majority of the ranges within the United States.

This range began forming during the Paleozoic as a result of the Ouachita Fold and Thrust Belt. The range spans 220 miles (354 km) and is actually an anticlinorium whose the oldest rocks are located in the central region of the peaks.The Ouachitas continue all the way to the Black Warrior Basin where they eventually meet up with the Appalachian Mountains.

Aptly named, Ouachita National Forest is mostly forested. Pine, oak, and hickory trees can be seen throughout the national forest and are present even at higher elevations.

Endemic to the state of Arkansas is the maple-leaf oak. Other endemic species include Ouachita bluet (Houstonia ouachita), Browne’s waterleaf (Hydrophyllum brownei), and Arkansas gayfeather (Liatris compacta), among others.

Within the forest lie large populations of white-tailed deer and coyotes. Many years ago, both bison and elk inhabited the region, though they have both been locally extirpated. Black bears are rarely seen in the forest, yet they do still inhabit the entire region.

The wetlands found at lower elevations in the national forest are home to numerous species of salamanders. Many of these species are also endemic to given regions within the forest.

Prior to European colonization, the forest was home to the Ouachita Tribe, which the mountains and the protected forest are named after. The name Ouachita is believed to come from the French spelling of the word Washita. The term roughly translates to mean “good hunting grounds.”

By the sixteenth century, the Indigenous people of the region were a group of farmers who lived near what is now called the Ouachita River in established huts. The first travels through the region by Europeans took place in 1541, though settlers didn’t arrive in large numbers until the 1700s.

Around this time, the Ouachita Tribe is believed to have assimilated with the Natchitoches tribe. Many descendants of the Ouachita are now enrolled members of the Caddo Nation.

The Ouachita National Forest was established in 1907, and it was originally known as Arkansas National Forest. Around a decade later, the forest was almost changed into a national park, though this new designation never materialized. The name of the forest was later changed to its current form in 1926.

Nowadays, the forest is home to a vast network of hiking, mountain biking, and horseback riding trails, which makes it a popular destination for outdoor recreation in the region.

Ouachita National Forest is home to numerous trails and other opportunities for outdoor adventure. Here are some of the top hiking areas to visit in the national forest:

The Ouachita National Recreation Trail spans 223 miles (359 km) across the forest. The trail is the longest continuous route in the forest as 192 of its miles (309 km) are located within the forest boundaries.

A majority of the trail lies within Arkansas while 46 miles (74 km) are within Oklahoma. Hikers and backpackers frequently use this trail while small sections are open for mountain biking.

Eagle Rock Loop is the most popular backpacking trail in the forest. The route is 26.5 miles (42.6 km) long and it has 3,966 ft (1,209 m) of elevation gain. The trail is the longest backpacking loop within the state of Arkansas.

Often completed over the course of three days, Eagle Rock Loop features scenic views of the forest with numerous waterfalls and rivers throughout. The high amount of water access makes the trail popular for backpackers of many skill levels.

The Winding Stairs Trail is a 4.5 mile (7.2 km) long hike with 419 feet (128 m) of elevation gain. The trail follows along the Little Missouri River and is known for its rock formations and access to various swimming holes along the river.

The river is surrounded by a lush forest. Along the trail, hikers have views of waterfalls and rock formations that appear to form a staircase, which is how the trail got its name.

Looking for a place to stay near Ouachita National Forest? Here are some of the best cities and villages to check out in the region:

The closest city to the forest is Hot Springs, Arkansas. The resort city lies within the foothills of the Ouachita Mountains. The city gets its name by being surrounded by numerous natural hot springs.

Hot Springs has a population of around 38,000 and is home to the oldest federal reserve in the nation, Hot Springs National Park. The springs are thought to have healing powers, and were commonly used by Indigenous Tribes. Today, the city is a popular stop among tourists in the region.

Located an hour west of Hot Springs lies the city of Little Rock. The city is the most populated within the state with a population of 197,000 people.

Little Rock is known for its history, rich culture, and southern hospitality. The city is also known for having been the site of a famous instance of forced desegregation at Little Rock Central High School after the landmark Supreme Court ruling Brown v. Board of Education. There is a memorial at the Arkansas State Capitol that honors the nine Black students who were the first to integrate the school.

As the capital of the state, Little Rock is home to numerous museums and restaurants. A small rock formation along the southern bank of the Arkansas River gave the city its unique name. The city’s close proximity to outdoor recreation has also made it popular with tourists of the region. 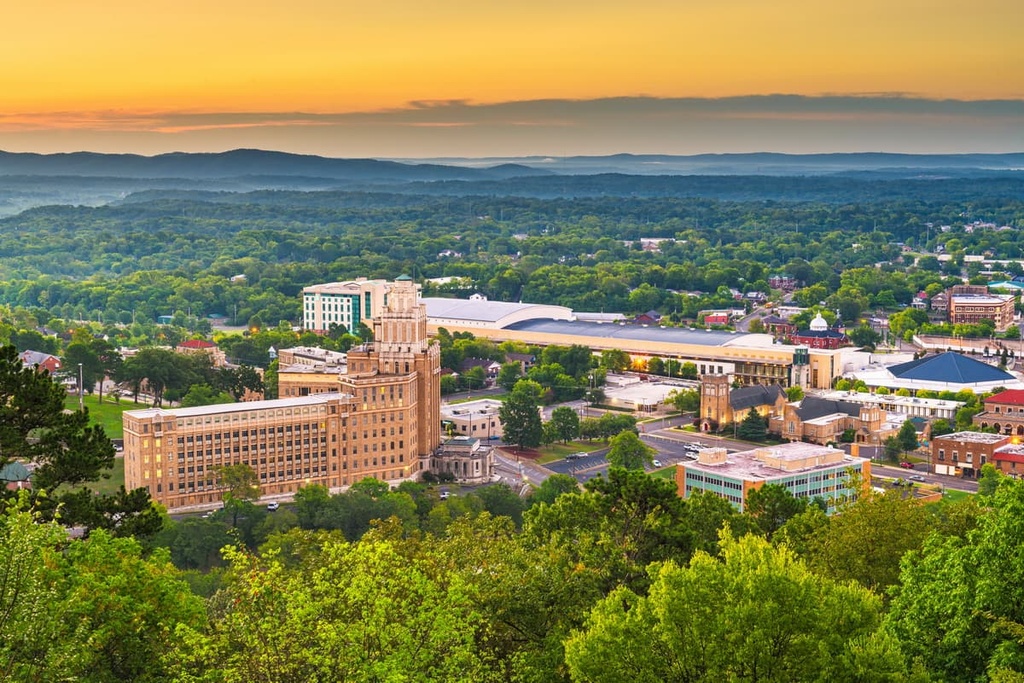 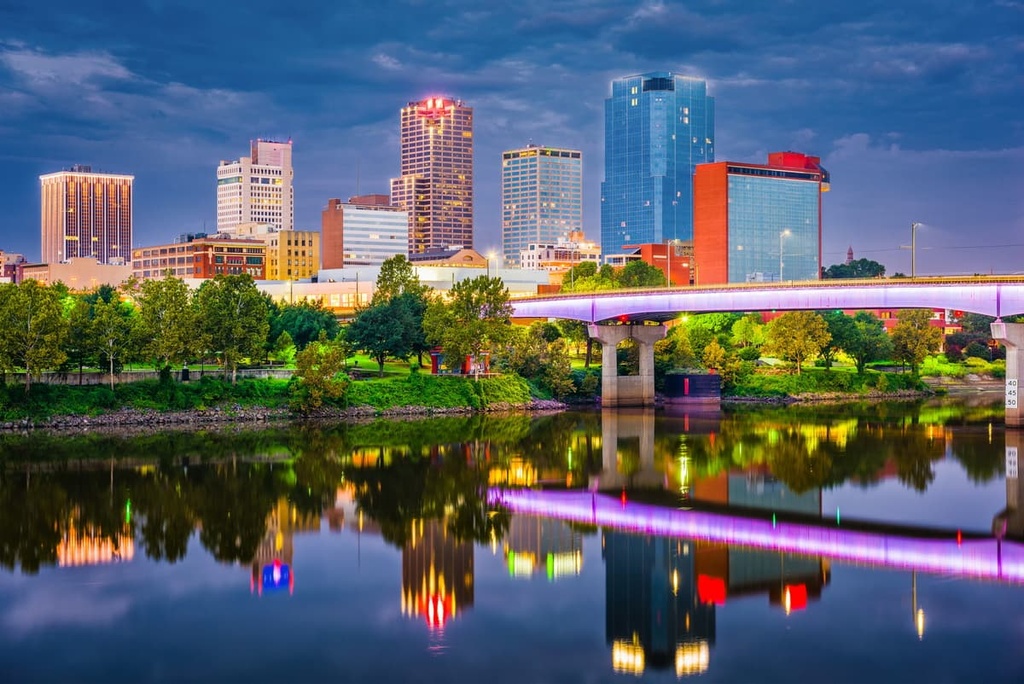 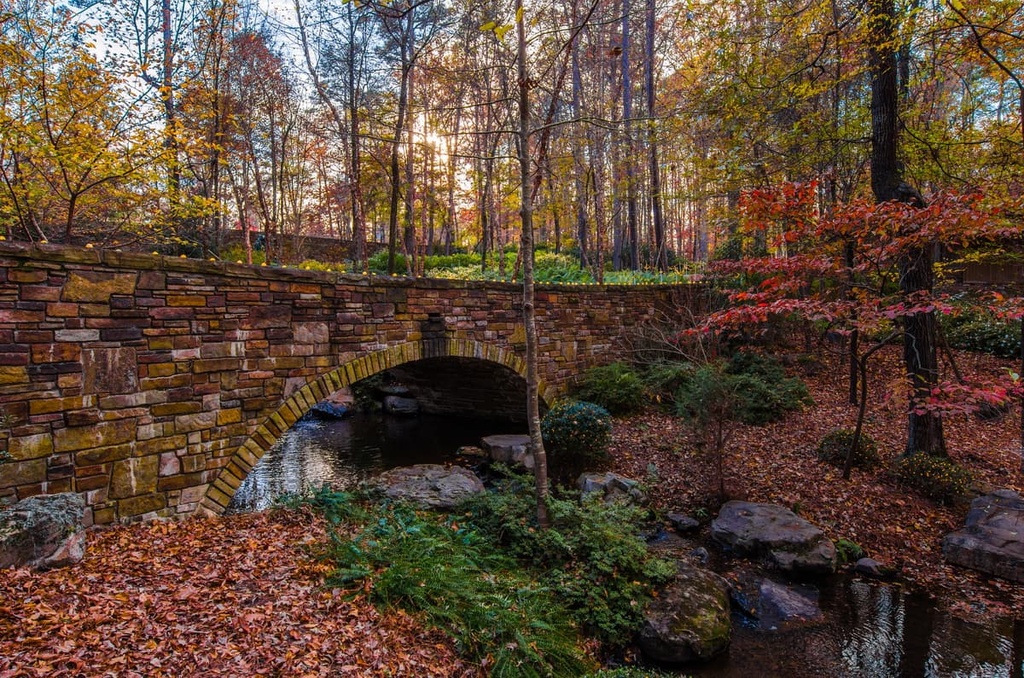 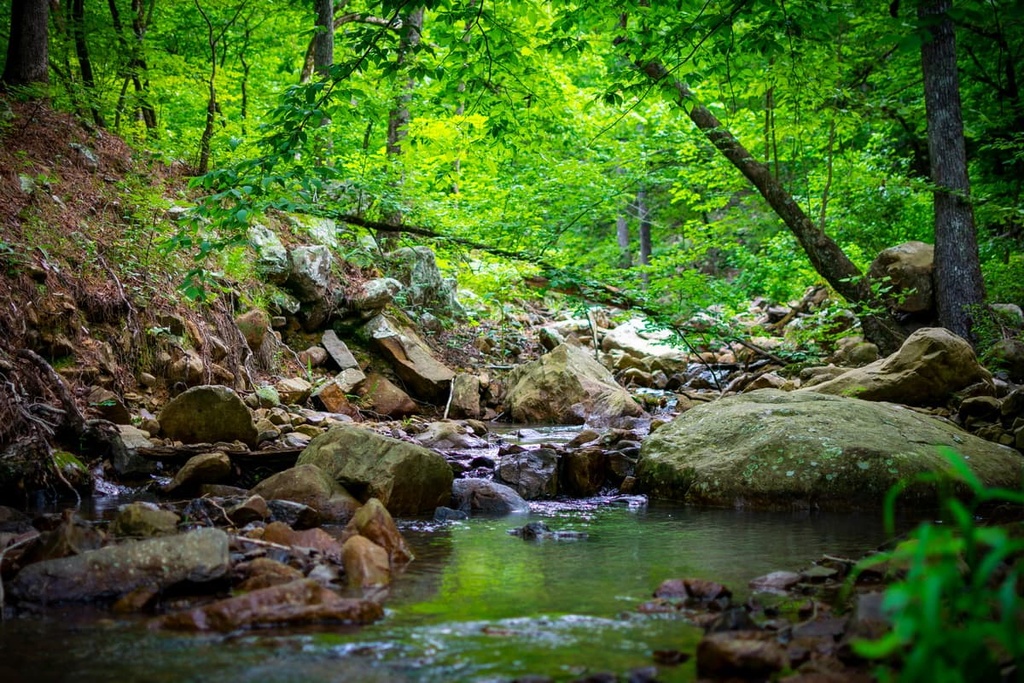 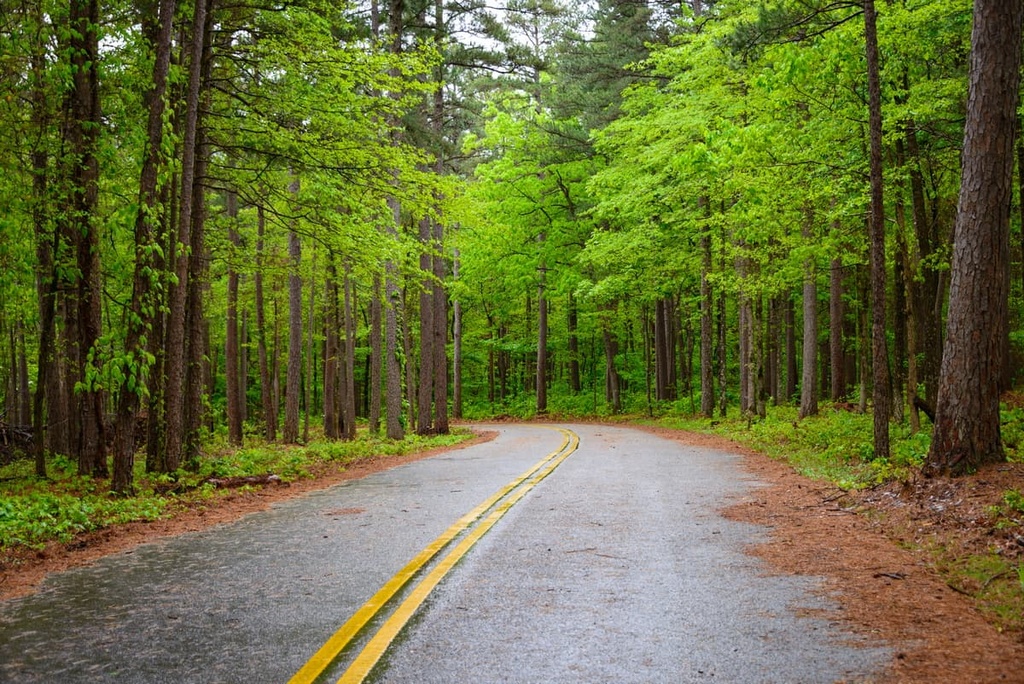 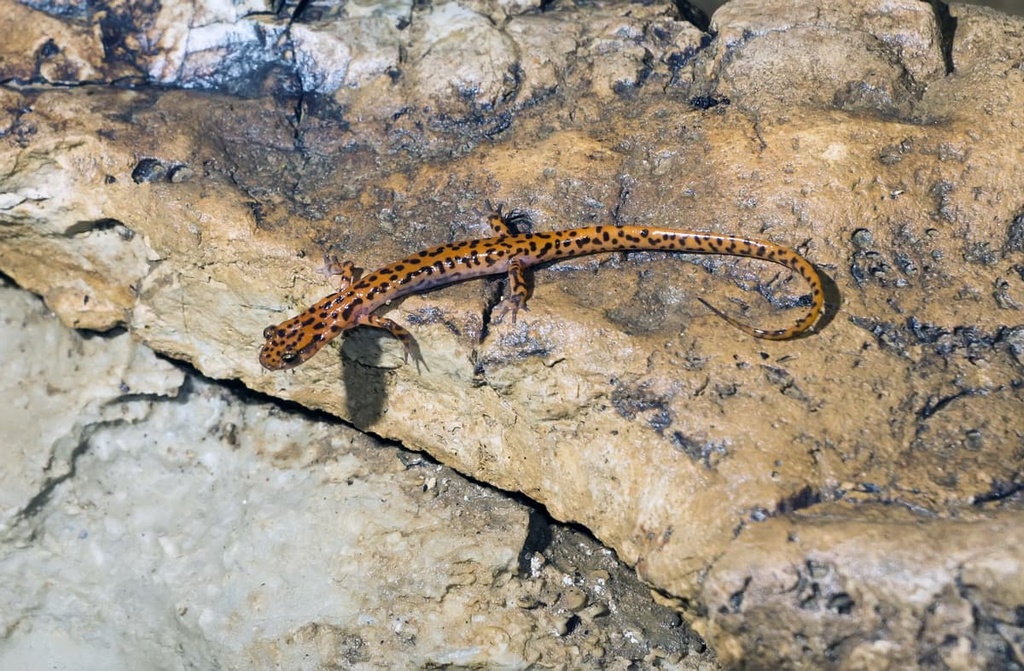