Ozark-Saint Francis National Forest is a large area of federally managed land located in the US state of Arkansas. This forest is known for its fantastic collection of trails and streams. It contains 218 named mountains with the tallest and most prominent peak being Turner Ward Knob. The mountain stands at 2,454 ft (748 m) with 1,509 ft (460 m) of prominence. 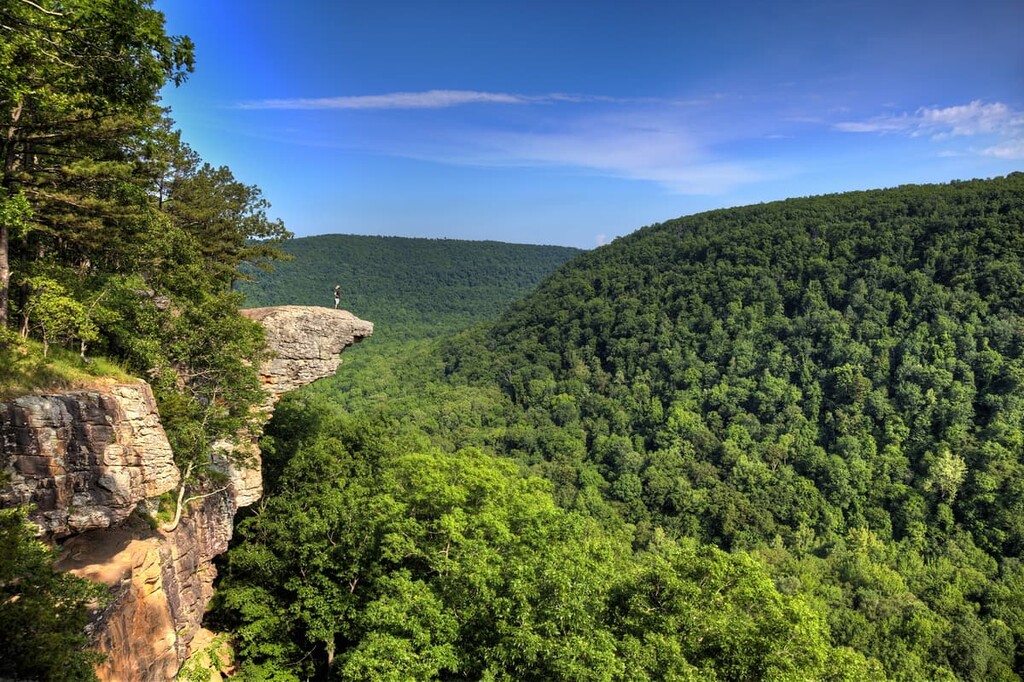 The Ozark National Forest covers an area of 1.2 million acres (485,600 ha) within the Ozark Mountains. The southern stretches of the forest are located near the Ouachita Mountains. There are 11,000 acres (45 sq km) of old growth forest throughout the protected region, with a majority of it being located along the southern ridgeline.

The mountains within the Ozark National Forest are distinct from the other topographical features in the region, with their rolling hills and dense forests. Besides the peaks, the most defining feature of the forest is its abundance of rivers and streams. Sections of the forest lie within the Arkansas River Valley.

There are also five wilderness areas located within the Ozark National Forest:

The St. Francis National Forest spans just over 22,000 acres (8,900 ha) of land and it is located in eastern Arkansas near the Mississippi River in Phillips and Lee counties. The forest is one of the smallest national forests in the country, which is one of the reasons why it has been combined with the Ozark National Forest.

The St. Francis National Forest has two major lakes, Bear Creek Reservoir and Storm Creek Lake, both of which are known for their fantastic fishing opportunities.

The Boston Mountains are home to some of the tallest peaks in the entire state of Arkansas and the Ozarks as a whole. These peaks, and the others of the region, were formed during the late Paleozoic era.

During this time, South American was colliding with North America, which resulted in the uplifting of the Ozark Plateau. Continual folding and faulting gave rise to the sandstone uplands that are present throughout the forest today.

The plateau was once much flatter, but millions of years of erosion left behind Boston Mountains and the deep river valleys that we see in the region today.Furthermore, weathering and erosion of the region’s widespread limestone bedrock has allowed for the creation of vast caves.

The region also contains large deposits of valuable opes, including barite, zinc, iron, and lead. As a result, the area was heavily mined during the early twentieth century.

A vast majority of the protected region is covered in forest consisting primarily of shortleaf pine, white oak, northern red oak, post oak, and blackjack oak. The undergrowth of these forests are populated with dogwood, redbud, and maple trees.

Despite the large number of trails in the region, the forest is home to a variety of wildlife. Populous species include black bears, white-tailed deer, rabbits, and wild turkeys. Threatened and endangered species of the region include bald eagles, gray bat, Indiana bat, along with the Ozark big-eared bat among others.

Numerous species of freshwater fish can be found throughout the forest’s numerous lakes, creeks, and rivers. This includes crappie, channel catfish, warmouth, and largemouth bass.

Prior to European colonization, the forest was home to many Indigenoush communities, many of whom used the area for hunting grounds. In particular, the Ouachita people, among others, traditionally lived to the south of what is now the Ozark National Forest in the Ouachita Mountains.

By the early eighteenth century, many Ouachita people assimilated into the Natchitoches (Náshit'ush) tribe. The Ouachita community had been decimated by disease and violence at the hands of European settlers, so many sought refuge with the Natchitoches Confederation. These days, many of the descendents of the Ouachita are now enrolled members of the Caddo Nation, which is based in what is now Oklahoma.

Peoples of European descent potentially started arriving in the region sometime during the sixteenth through seventeenth centuries. During the eighteenth century, French and French-Canadian fur traders established a number of small trading outposts in the region. The name “Ozark” is potentially a corruption of the French words aux Arcs, which could roughly translate to “of Arkansas.”

In 1908, the Ozark National Forest was established by a proclamation from President Theodore Roosevelt. Meanwhile, the St. Francis National Forest was established in 1960 by President Dwight D. Eisenhower. These days, the forests are still distinct units of federal land, however they are managed by one supervisor’s office in Russellville, Arkansas.

Ozark-Saint Francis National Forest is home to numerous trails and outdoor recreation areas. Here are some of the top hiking areas to visit in the forest:

Located in the heart of the forest lies Whitaker Point Trail, the most popular hike in the region. Also known as Hawksbill Crag, this out and back trail is 2.9 miles (4.7 km) with 413 ft (126 m) of elevation gain.

After weaving its way through the forest, this trail opens up to showcase the large crag that hangs over the forest below. Once at the rock, hikers have views of the forested valley below, providing them with one of the best views in the entire forest.

This casual trail ends with views of two waterfall features. The first showcases the creek gently following the smooth rock into a small swimming hole. The trail gets its name from a portion of the creek that falls directly through a hole descends onto the forest floor.

The Devils Canyon Scenic Area is a 4.5 mile (7.2 km) trail with 620 feet (189 m) elevation gain. The forested loop trail features two waterfalls as the route winds through a canyon. After seeing the waterfalls, the trail climbs steeply out of the canyon before returning to the parking lot.

Looking for a place to stay near Ozark-Saint Francis National Forest? Here are some of the best cities and villages to check out in the region:

The nearest city to the forest is Russellville, Arkansas. The city has a population of around 30,000 and is in close proximity to Ozark-Saint Francis National Forest. Besides hiking, Russellville is known for its abundance of hunting and fishing opportunities.

Besides the various water sports opportunities on the nearby lakes, there are also mountain biking trails located just outside the city. The quaint downtown has numerous local shops and restaurants perfect for exploring after a long day of hiking.

The city of Little Rock is located just over an hour southwest of Russellville. With a population of nearly 200,000 people, Little Rock is the most populous city in the entire state. Known for its southern hospitality, and vibrant culture, Little Rock is also the state capital. The city is also home to numerous museums and restaurants that showcase the history of the region. Little Rock gets its name from a small rock formation along the southern bank of the Arkansas River that runs through the city. 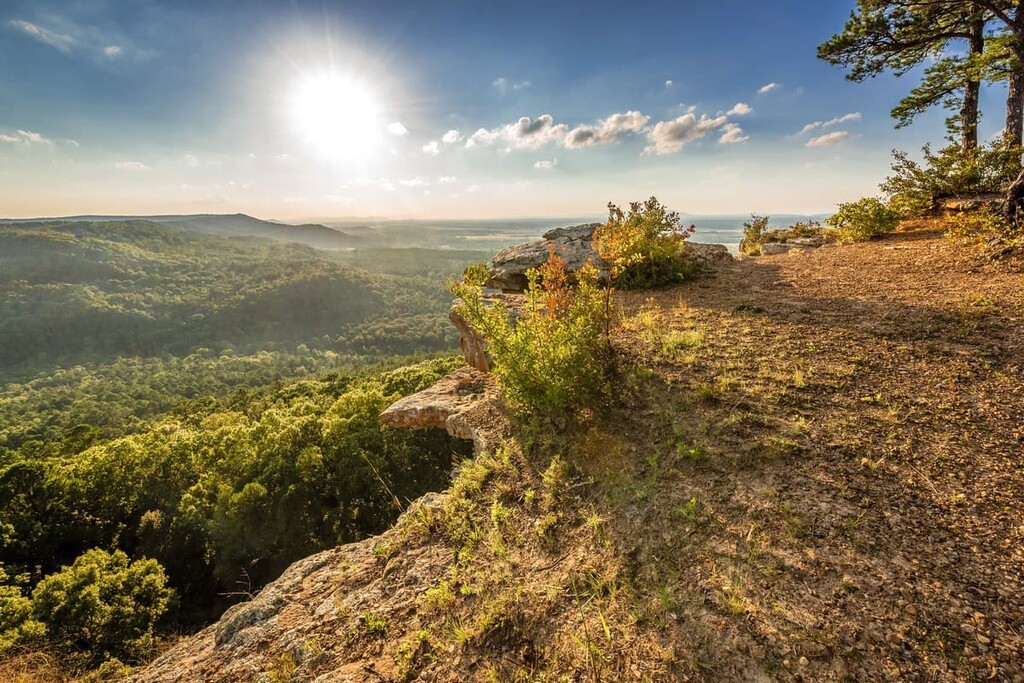 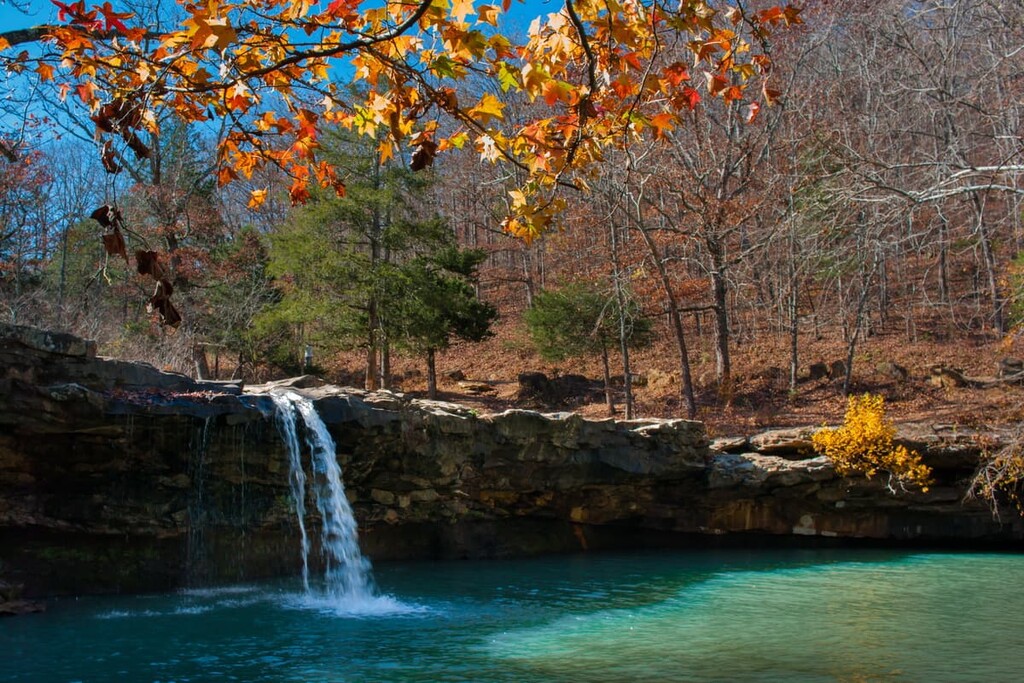 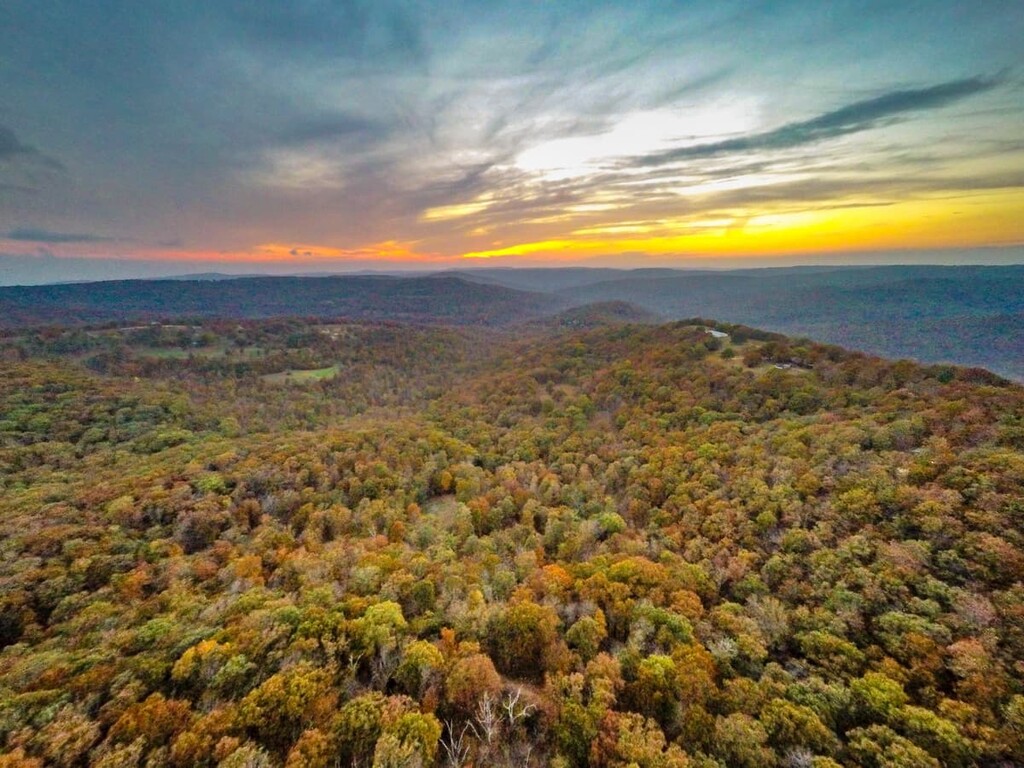 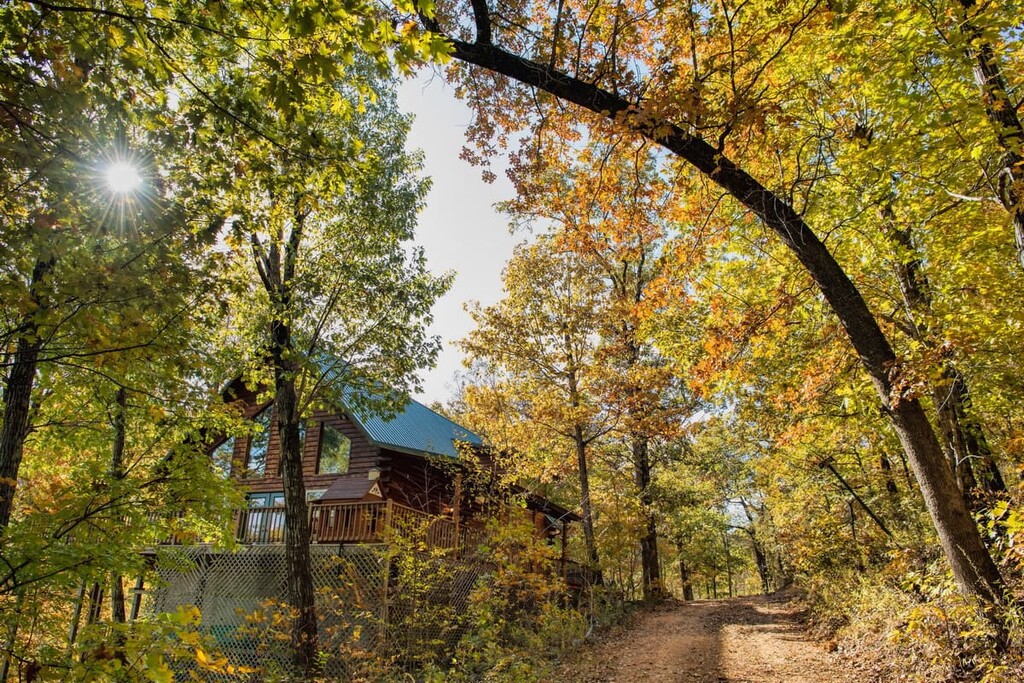 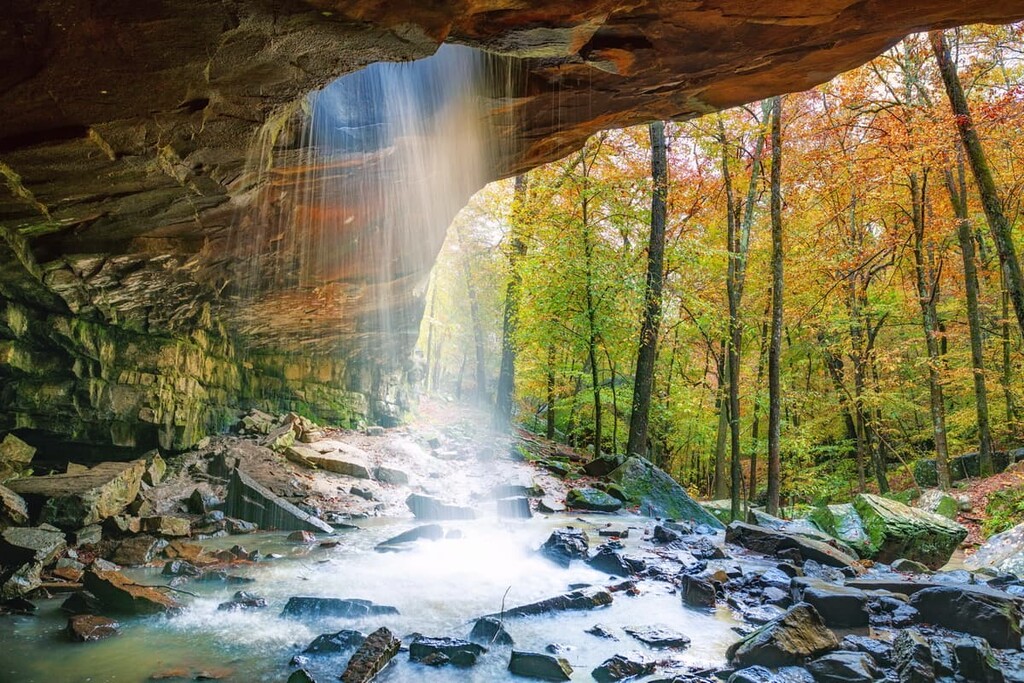 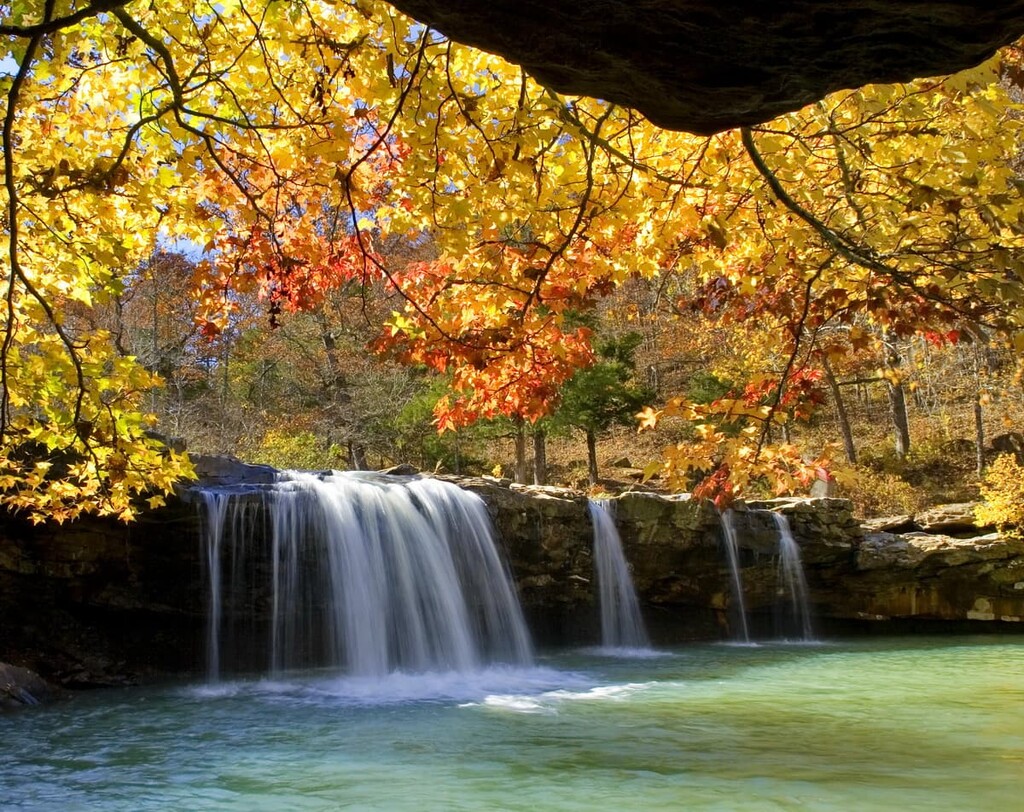