Located in southeastern British Columbia, Canada, the Kootenay Range (also known as the Western Range) is known for its spectacular mountain vistas and collection of well-developed hiking trails. There are a total of 86 named mountains in the Kootenay Range, the highest of which is Mount Gagnebin (2,960 m/9,711 ft) and the most prominent of which is The Judge (2,739 m/8,968 ft). 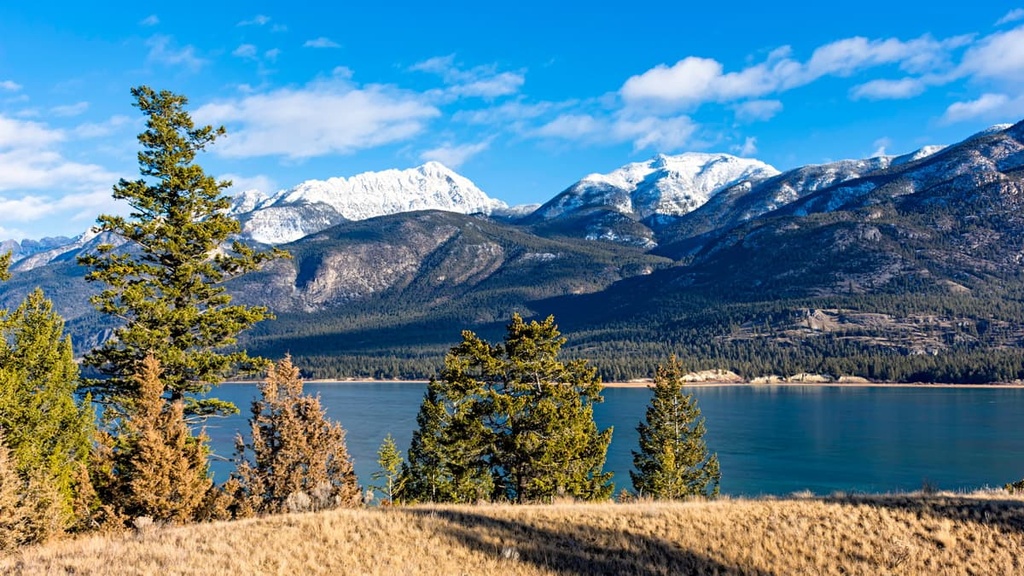 The Kootenay Range is a collection of peaks located in the southeastern part of the Canadian province of British Columbia. It is made up of four separate mountain subdivisions—the Rockies, Purcells, Selkirks, and Monashees. These four subdivisions combined amount to a total surface area of 4,940 square kilometers (1,910 sq. mi).

The Kootenay Range is bordered by the province of Alberta to the east and by the US states Washington, Idaho, and Montana to the south. The range is also home to Kootenay National Park, which was designated as Canada's tenth national park in 1920. Approximately 530,000 people visit this park each year to enjoy its breathtaking views and hiking trails.

The Kootenay Range also boasts the Kootenay Pass, one of the most scenic highway drives in all of British Columbia. The pass is located high in the Selkirk Mountains at an elevation of 1,775 m (5,823 ft) above sea level. It runs for 40 mi (64 km) in an east to west direction along Highway 3 (Crowsnest Highway).

The Kootenay Range is rather unique in a geological sense due to its physical setting. While many of the mountains in the Rockies predominantly consist of limestone, there are several areas in the Kootenay Range that are volcanic in origin.

Around 1.2 million years ago, the region consisted of an island that was surrounded by a shallow sea. Over the course of millions of years, erosion, deposition, and subsidence resulted in the accumulation of a thick blanket of sediments in the region. Many of these sediments became some of the oldest rocks in the area, and they are primarily located in the northern part of the Kootenay Range along the Continental Divide.

It wasn’t until around 400 million years ago that the mountains in the region truly began to take shape. During this time, the sedimentary strata in the region were warped by uplift and igneous intrusion, which, along with various degrees of metamorphism, resulted in the formation of the Selkirk and Purcell ranges.

As this occurred, a group of limestone beds began to spread eastward with strong lateral pressures, all of which contributed to the folding, faulting, and uplift of the Rockies. Subsequent exposure to glaciation and erosion has caused the mountains to form into their present state, with serrated, glacier-cloaked granite peaks dominating much of the landscape.

The fascinating geologic history of the Kootenay Range, with its volcanic roots, in particular, has resulted in a region that’s rich in mineral deposits, with plenty of potential for both agriculture and geothermal energy development.

The Kootenay Ranges are home to an incredibly diverse collection of flora and fauna. One can find everything from glaciers and desert grasslands to lush forests and rolling valleys in the region. A combination of elevation and topography is to thank for this biological diversity.

The eastern part of the region is home to mostly barren alpine peaks where only the hardiest of brush and sedge species can survive. Here, the mountain slopes (and indeed much of the valley) are mostly covered by dense forest, with an abundance of Engelmann spruce, subalpine fir, Douglas fir, and ponderosa pine growing in the area.

Elsewhere, particularly to the west near the Purcell Mountains subdivision, another unique ecosystem thrives due to the rainshadow effect. This rainshadow results in lush, rainforest-like environments on the western slopes of the region, with more arid desert grassland conditions on the eastern slopes. It’s in these dryer conditions where you’ll be able to find succulents in the mountains.

The main valley running through the Kootenay Ranges is home to the Columbia River wetlands. This area features one of the longest stretches of undeveloped wetlands on the entire continent and is also home to several species of migratory birds and larger mammals.

This same valley is also an important winter range for much of the wildlife in the region. Large ungulate species like mountain goats, bighorn sheep, moose, and white-tailed deer all roam throughout the area. The valley is also home to grizzly bears, black bears, coyotes, and martens. Sightings of cougars and bobcats have also been reported in the southern areas of the range.

Birdwatchers will find a lot to love in the Kootenay Ranges as well; many rare species use the area as a summer nesting ground or as part of their migration route. Notable species include the golden-crowned kinglet, boreal owl, spotted sandpiper, chipping sparrow, and common nighthawk.

There are also several species of vulnerable birds that can be found throughout the region. Black scoters, Slavonian grebes, black swifts, rufous hummingbirds, semipalmated sandpipers, snowy owls, olive-sided flycatchers, and rusty blackbirds are just some of the rare and vulnerable species that can be found in the area.

The earliest evidence we have of human settlement in the Kootenay Range points back to about 11,500 years ago. As the glaciers melted, people began to migrate into eastern Kootenay, where the diversity of the flora and fauna provided ample opportunity for a prosperous livelihood.

Around 10,000 years ago, several First Nations started to migrate and settle throughout the region. These First Nations included the Carrier, Secwepemc, Okanagan, Sinixt, and Ktunaxa, among others. They ventured eastward in search of prime buffalo hunting locations across the prairies. Many First Nations, including Ktunaxa, live in the area to this day.

The first Europeans to enter the area are believed to have done so in the late eighteenth century. By the early 1800s, European fur traders and trappers were continuing to push further westward in the region. The Hudson Bay Company also expanded into the Kootenay Range around this time in search of fur trading opportunities.

During the 1850s, the region experienced quite a boom in its mining industry, although the prosperity of the industry could be rather turbulent at times. Historical records indicate that it was quite a wild period in the West indeed, as the isolated and rugged nature of the region resulted in an industry rife with claim jumping as well as the frequent development and subsequent abandonment of mining towns.

Nevertheless, the mining industry in Kootenay went on to experience a boom, and by the late 1800s, the area had garnered quite an amount of international renown. Mining sites within the region became famous thanks to an abundance of deposits of galena, lead, zinc, copper, silver, and gold.

As the mining industry developed, the Canadian Pacific Railway moved into the area and built a number of small railroad systems throughout the late 1800s and early 1900s. These railways were constructed both from east-west and north-south directions, which further bolstered the development of the surrounding areas.

Today, the Kootenay Range supports a thriving logging and mining industry. The area is also a rather popular tourist destination. As a result, many towns and cities in the region put great effort into developing ski hills, hiking trails, and other attractions for outdoor enthusiasts.

Best Hikes in the Kootenay Range

There are countless day hiking opportunities for visitors to enjoy in the Kootenay Range. Some of the best trails in the area include:

There are several national parks that are located either within the Kootenay Range or nearby enough to be considered as potential hiking options for both visitors and locals in the region. These include:

Skiing in the Kootenay Range

While the Kootenay Range sports some world-class hiking options during the warmer summer hiking season, it’s also an outstanding winter skiing destination thanks to the many truly incredible ski resorts and alpine routes that are located in the range. With that in mind, here are some of our top suggestions for where to stay and ski in the area.

The Revelstoke Mountain Resort is located on Mount Mackenzie, just outside of Revelstoke, British Columbia. The resort is widely known for its 1,710 m (5,610 ft) vertical drop, which is the longest vertical descent of any ski resort located in North America.

The Fernie Alpine Resort is located in the Lizard Range and has been open since 1962. It features over 1,000 hectares (2,500 acres) of skiable terrain with 10 lifts, as well as on-hill accommodations and amenities.

The Kimberley Alpine Resort is another fantastic ski resort in the area, offering 5 mountain lifts and a total of 31.9 km (19.8 mi) of ski trails spread across 34 slopes. The resort is located in the Purcell Mountains atop North Star Hill and boasts a vertical drop of 751 m (2,463 ft).

The Whitewater Ski Resort is located in the Selkirk Mountains, within the Ymir Bowl beneath Ymir Mountain. The resort is located about 25 minutes away from the town of Nelson, British Columbia.

There are so many top-notch ski resorts found within the Kootenay Range besides the few that are listed above that it’s worth highlighting a few honorable mentions, too. Other great resorts to check out when in the area include:

In addition to the ski resorts mentioned above, here are some of the more interesting cities and towns to check out if you’re going to visit the Kootenay Range.

Radium Hot Springs is a small village named after the hot springs of the same name. The village is located at the junction of the Icefields Parkway and Highway 95 in British Columbia, just to the south of Kootenay National Park. It’s a perfect place to use as a launching pad for adventures nearby hiking trails, and it offers some great wildlife viewing opportunities.

Founded in 1898 by William Fernie as a small mining town at the height of the mining boom, Fernie was eventually incorporated as a municipality city in 1904. Today, the quaint town provides stunning mountain views (Fernie is the only city-class municipality to be completely surrounded by mountains) as well as plenty of opportunities for outdoor recreation all year round.

The small mountain town of Banff is another excellent place to stay if you’re planning on exploring the Kootenay Range. While it’s located just over 90 km (56 mi) away from the boundaries of the Kootenay Range, the town is full of charm and has several outstanding options for accommodations available, including the luxurious Fairmont Banff Springs hotel. 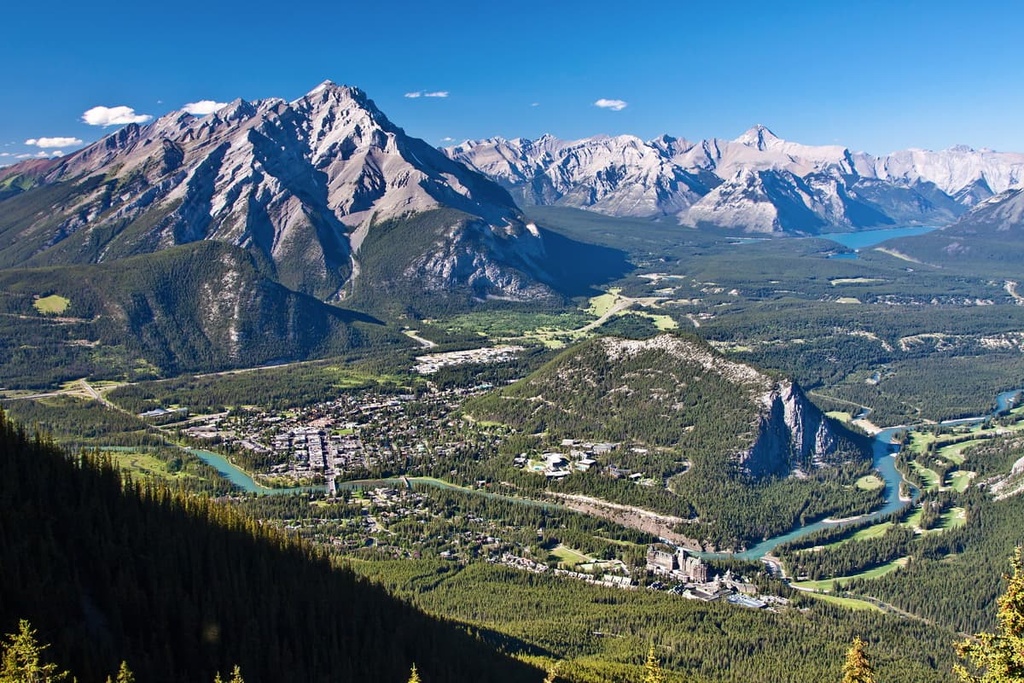 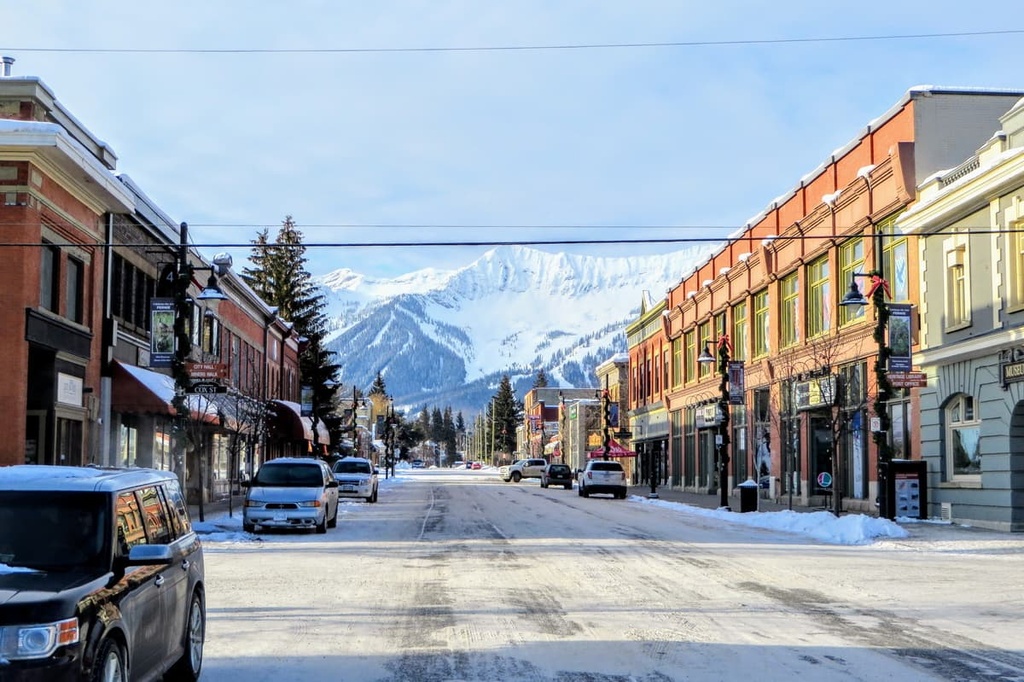 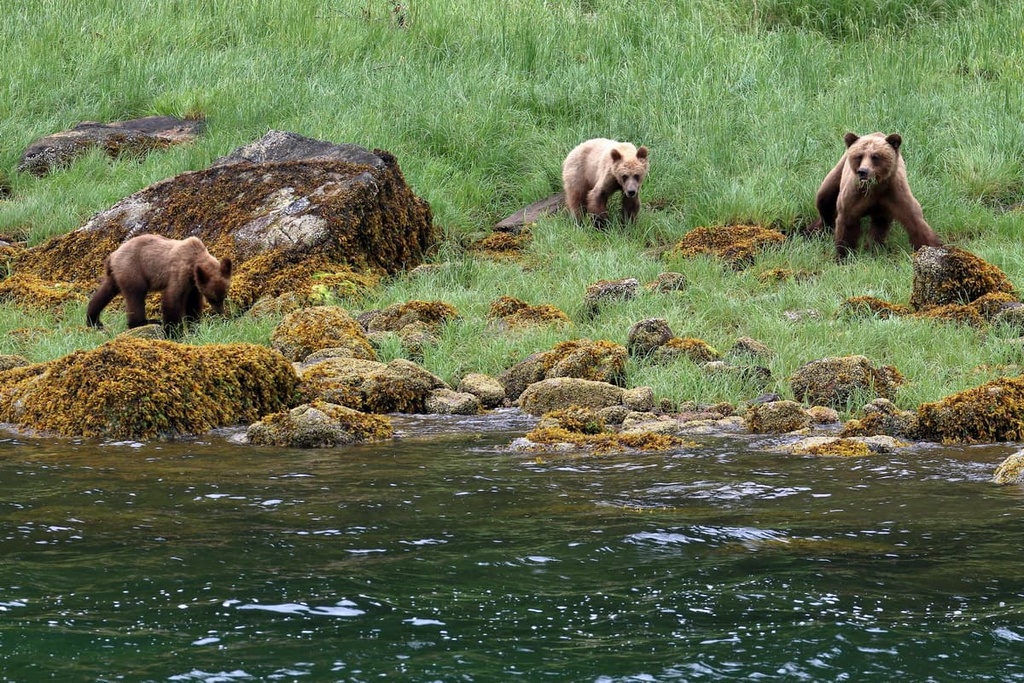 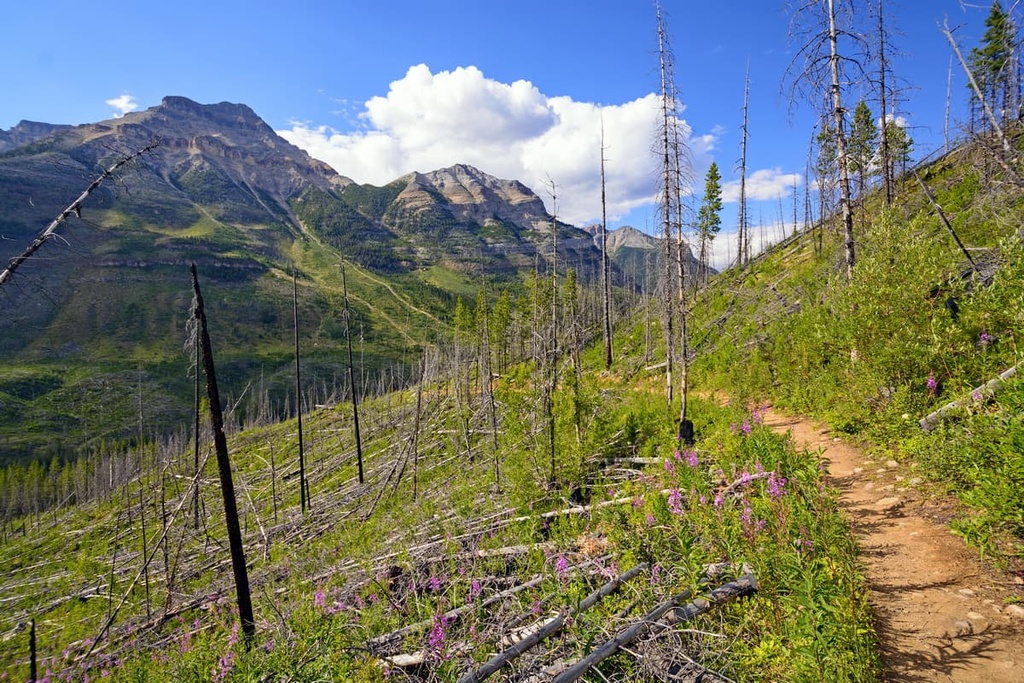 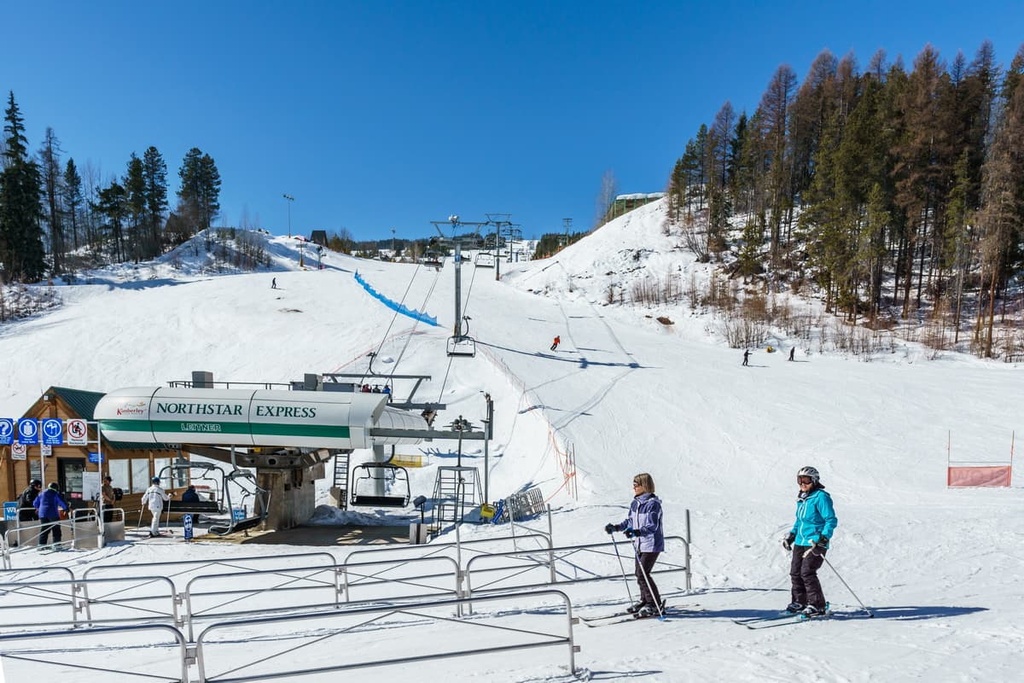 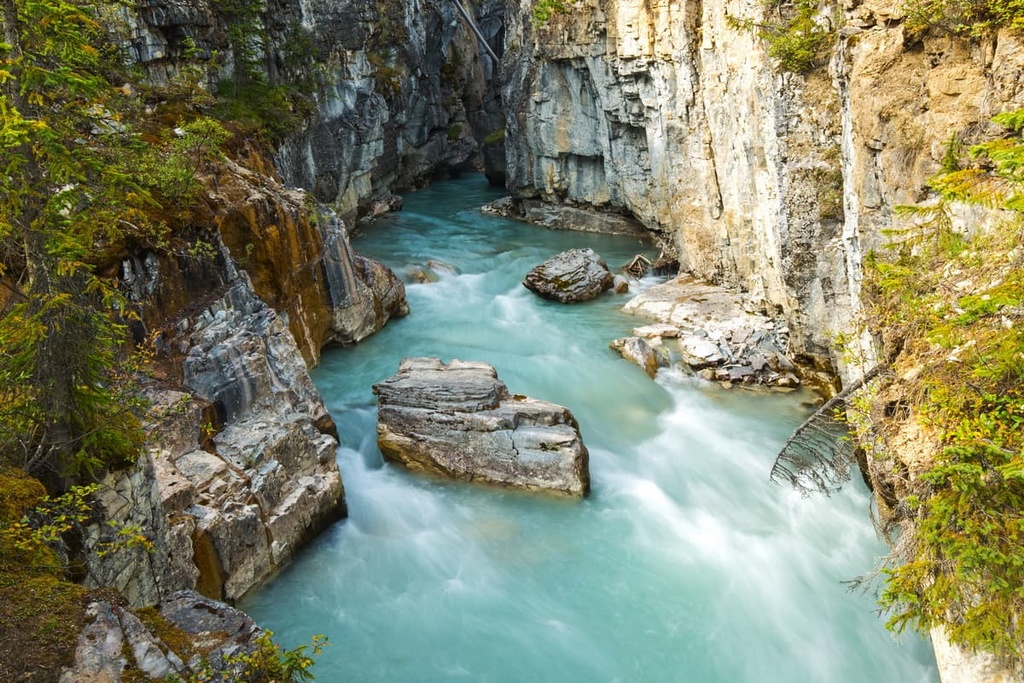