The Mokelumne Wilderness is a 164 square mile (462 km2) area of federally protected land located in the eastern part of the US state of California. The Wilderness is home to 13 named mountains, the highest and most prominent of which is Round Top (10,381ft/3,164m).

Mokelumne Wilderness is situated within Alpine, Amador, and Calaveras counties. Additionally, it is part of the larger Sierra Nevada range, which stretches for 400 miles along the crest of California. 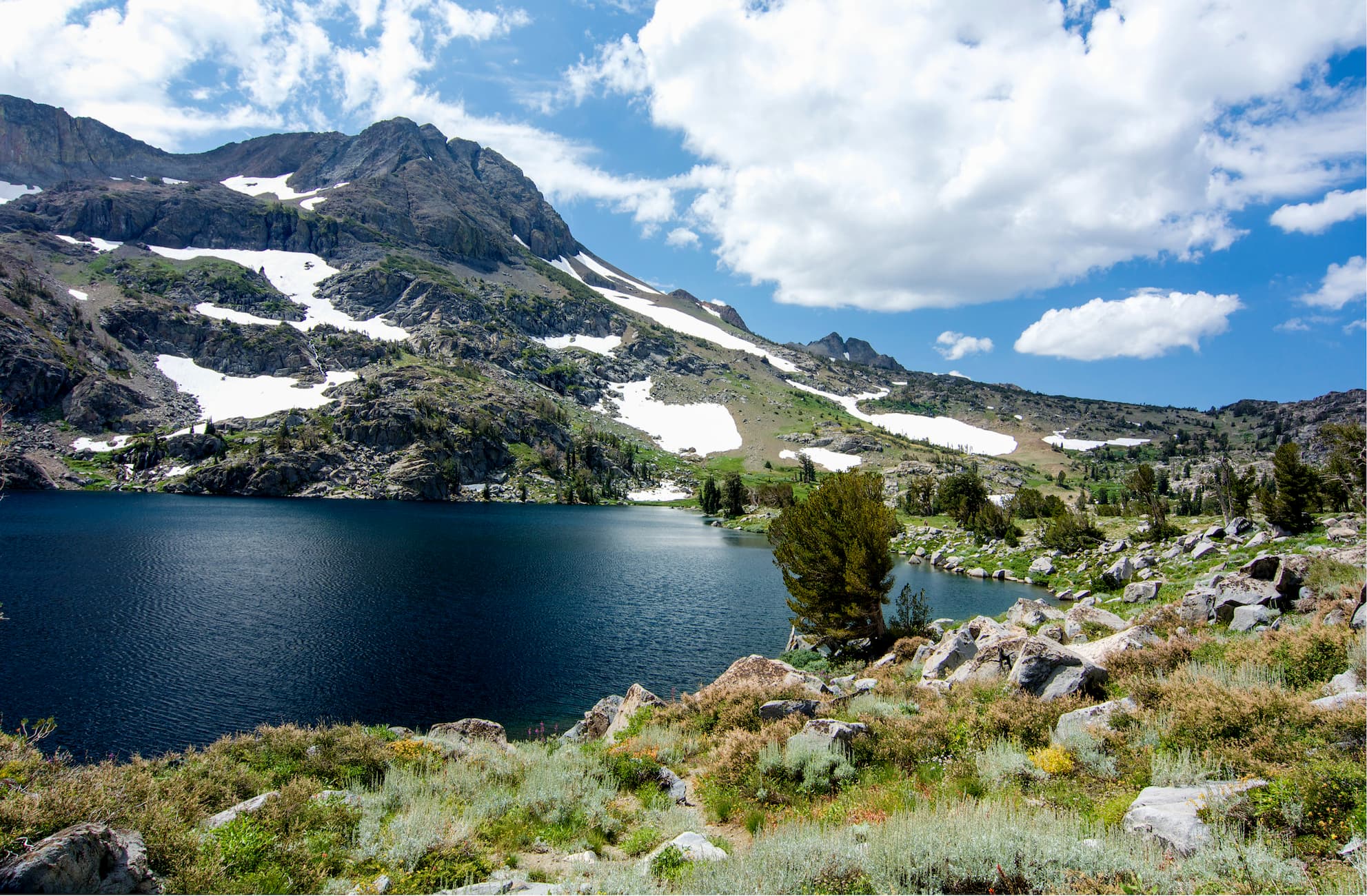 Geology of the Mokelumne Wilderness

Geologically, the mountains within the Mokelumne Wilderness are similar to other peaks found within the Sierra Nevada. The bedrock in the region is part of the Sierra Batholith, a large pluton of granite that was uplifted during the Nevadan orogeny to form the mountains we see today.

During the Pleistocene glaciation, which started some 2.5 million years ago, the region was also covered by extensive glaciers and ice sheets. These ice sheets eroded away at the bedrock to create the mountains that we see today.

Within the Wilderness, the Round Top Geologic Area is a place of special interest for those looking to understand the region’s geologic history. The Geologic Area covers 4.6 mi2 (12km2) of land and includes some geologically important landforms like dikes, moraines, lava flows, cirques, and granodiorite outcrops.

Additionally, the Geologic area is home to the “Elephants Back”, a unique landmark that’s actually a mass of solid lava. The Elephants Back has quartz veins that contain a small amount of gold. To this day, you can still see evidence of past mining activities in the area around Elephants Back.

The volcanic soils in the region support a vast array of flora and fauna. This is especially true around the wilderness’ highest peak - Round Top - which is actually the remains of an ancient volcano.

Throughout the wilderness, visitors can see canyon live oak, whitebark pine, western juniper, ponderosa pine, lodgepole pine, and subalpine fir. However, surrounding major waterways in the region, such as the Mokelumne River, there are unique riparian zones that are home to a number of other species. These riparian zones are home to forests that are predominately creek dogwood, western azalea, and mountain alder.

The region around Round Top, which is known as the Round Top Botanical Area is an area of special interest. This area is actually located at the meeting point between three ecosystems. As such, the combination of soils from three different types of botanical provinces - including sagebrush scrub, red fir forests, and subalpine/alpine meadows - supports a diversity of plant life.

Also found in this area is a very rare plant, known as the phantom orchid (Cephalanthera austiniae). This plant is all white, except for some small yellow patches on its flowers, and is known for being a parasitic orchid that can’t produce its own energy because it doesn’t have any chlorophyll. Instead, the plant relies on fungi in its mycorrhizae for sustenance.

Although the Mokelumne Wilderness is now designated as an “an area where the earth and its community of life are untrammeled by man, where man himself is a visitor who does not remain” (Wilderness Act, 1964) the region has a rich history of human inhabitation.

European settlers didn’t arrive in the area until the late 18th century, or perhaps the early 19th century. Spanish missionaries frequented the region but the first permanent European settlement wasn’t created until French fur trappers set up an outpost near Mokelumne Hill.

John C. Frémont’s 1844 expedition also traveled through the region around the Mokelumne River. In fact, Frémont is credited with establishing the English-language spelling of the name “Mokelumne.”

A few years later, the California Gold Rush brought droves of people to the area when gold was discovered around 1848 at Mokelumne Hill. Within just a couple of years of the discovery of gold, Mokelumne Hill became a boomtown of some 15,000 people.

It was also around this time that humans began to alter the course of the River. A number of dams were created to provide water for various types of mining and to control the flow of the river. The Mokelumne Wilderness lies just upriver of the Salt Spring Reservoir and Dam.

The region has plenty of opportunities for outdoor recreation, thanks to its great fishing lakes, plentiful hiking trails, and steep cliffs. The Mokelumne River is also very popular among whitewater paddlers. Highly skilled paddlers are often drawn to Fantasy Falls, a 26 mile Class V+ run through Alpine County to the start of the Salt Springs Reservoir.

Situated along the eastern portion of California, Mokelumne Wilderness is also close to other popular federally-managed areas, including the Desolation Wilderness to the North, the Emigrant and Hoover Wildernesses to the south, and Yosemite National Park.

The area is highly popular among backcountry travelers looking for some outdoor beauty in eastern California. There are a number of highly popular long-distance trails that travel through the region, so there’s truly something for everyone in the Mokelumne Wilderness area. Here are some of the main hiking areas:

There are a number of long distance hiking trails that traverse the region. These include the Pacific Crest Trail and the Tahoe-Yosemite Trail, which can be either thru-hiked or completed in sections.

Round Top and Winnemucca Lake

As the tallest peak in the Mokelumne Wilderness, Round Top generally draws quite a few visitors to its slopes. This trail starts off near the Kirkwood Mountain Resort and follows a 6.5 mile (10.5km) loop to the summit of Round Top.

You have two trailheads to start at for this hike - either the Carson Pass/PCT trailhead or the Woods Lake Campground Trailhead off of Highway 88. From the trailhead, you set off for Round Top Lake, which is a fairly easy 2 mile (3.2km) walk.

From there, you poke above treeline and start gaining elevation as you make your way to the saddle between Round Top and The Sisters. As soon as you reach the saddle, you make the final push over a false summit to the true summit of Round Top, which involves a small amount of scrambling.

Once at the summit, you can choose to return the way you can or you can make a loop by hiking toward Winnemucca Lake. The Lake is popular among day hikers, so it’s a great place to stop if you want to take a quick dip in the water to cool off. Then, you can make your way back toward the trailhead after a nice day of hiking.

Looking for a place to stay near the Mokelumne Wilderness? Check out these nearby cities:

Sacramento is located just 70 miles (110km) west of the Mokelumne Wilderness. It is the capital of the state of California and is the state’s sixth-largest city. With a population of over 500,000 people, Sacramento is a highly diverse city with plenty of shops, restaurants, and hotels to visit.

Sacramento is located at the intersection of I-80 and I-5, so it’s easy to get to by road. The city is also well connected by Amtrak to the San Francisco Bay Area, Seattle, and southern California. Plus, the city has a major international airport with regular service around North America.

South Lake Tahoe is located about an hour north by car from the Mokelumne Wilderness. The city is home to over 20,000 people and, as the name suggests, is located at the southern edge of Lake Tahoe.

South Lake Tahoe is a very popular outdoor recreation capital, thanks to the nearby Heavenly Mountain Resort and the city’s proximity to a number of fantastic parcels of public land. The city has many campgrounds and hotels to choose from, so it’s a good place to stop on your way to the Wilderness. It’s also easily accessible from Reno, Nevada, which has a major international airport.