Located along the eastern edge of the US state of California, near its border with Nevada, the Desolation Wilderness is a federally protected area that comprises some 100 sq. miles (258.8 sq. kilometers) of land. The Desolation Wilderness is home to 22 named mountains, the highest and most prominent of which is Pyramid Peak (9,980ft/1,250m). Other notable peaks in the region include Dicks Peak, Jacks Peak, Mount Tallac, Mount Price, and Maggies Peaks. 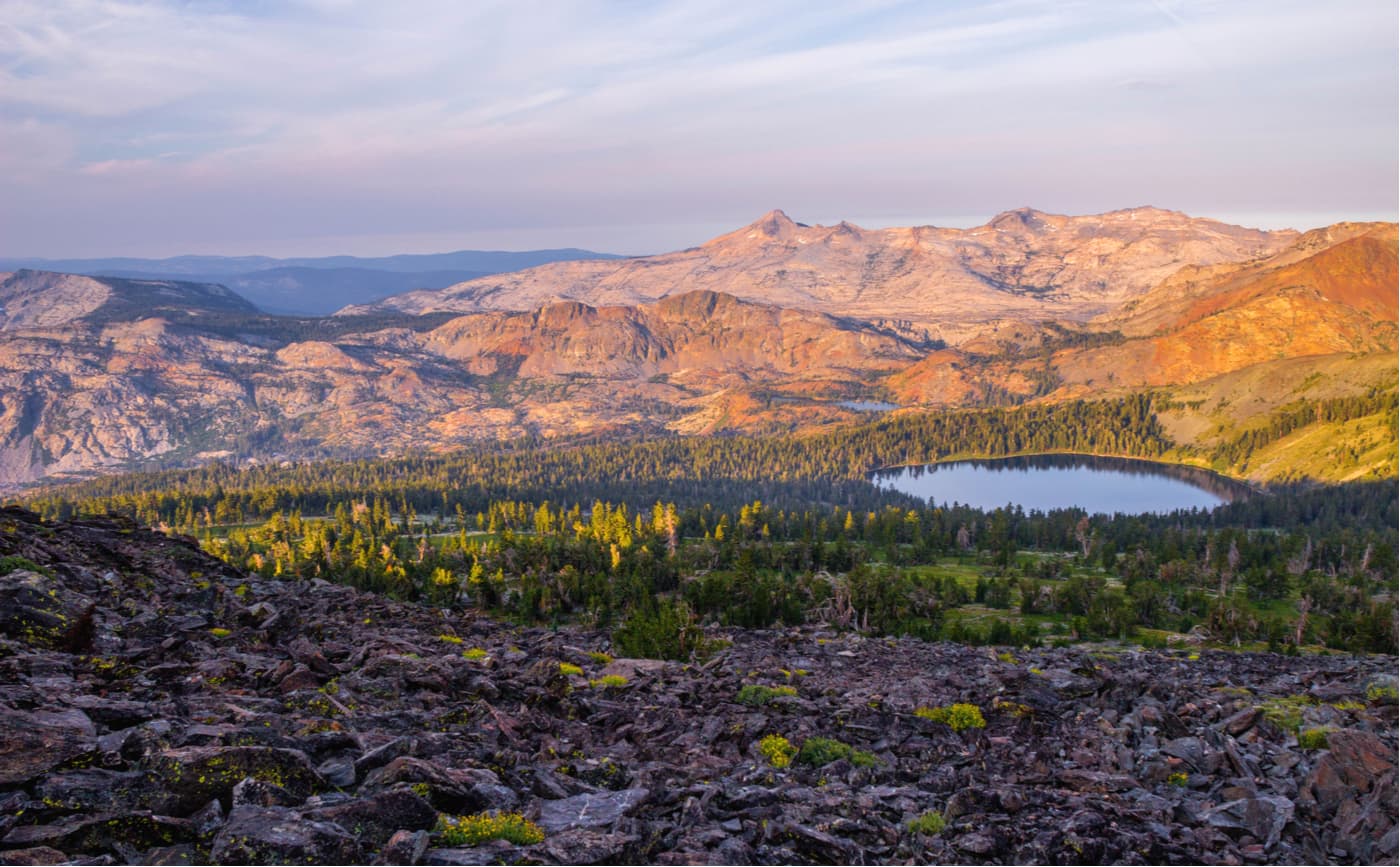 The mountains in the Desolation Wilderness are part of the greater Sierra Nevada Range, which span most of the length of the state of California. Geologically, the mountains in the region are part of the Sierra batholith, which is a massive collection of granitic rocks. These rocks were uplifted to create the 400 mile long Sierra Nevadas some 80 million years ago during the Nevadan orogeny.

While the mountains of the Desolation Wilderness were formed during the Nevadan orogeny, they owe their present-day appearance to the extensive glaciers that once covered the area. During the height of the Pleistocene glaciation, the land that is now part of the wilderness area was covered by an ice sheet that was over 1,000 feet (304m) thick.

As the ice moved across the landscape, it eroded away at the mountains, creating massive basins. These basins are now home to some of the area’s best-known alpine lakes, including Cascade Lake, Echo Lakes, Fallen Leaf Lake, and Emerald Bay. These glaciers also left behind some fantastic geologic features, including erratics, glacial polish, and roche moutonnées.

At higher elevations, much of the Desolation Wilderness is rocky and somewhat barren, thanks to its nutrient-poor soil. But, below treeline, the region is home to a fairly diverse abundance of flora and fauna. Between 7,400-9,000 feet (2,250-2,750m), the Desolation Wilderness has forests of mountain hemlock, western juniper, western white pine, Jeffrey pine, and ponderosa pine.

However, the densest forests in the region occur along lakes, meadows, and streams, where the generally poor soil is moist enough to support plant life. In areas without enough moisture, much of the landscape is covered with montane chaparral, which includes species such as huckleberry oak, mountain pride penstemon, and pinemat manzanita. Meanwhile, willow and aspen tend to dominate in the wetland areas of alpine meadows and marshes within the Wilderness.

This diversity of ecosystems supports a nice mix of wildlife in the Desolation Wilderness. Mule deer, black bear, coyote, bobcat, badger, wolverine, and pine marten are somewhat abundant in the area, even if they’re not frequently seen.

There’s also a great collection of birdlife in the Wilderness to keep the ornithologists among us happy. Additionally, the region’s many lakes and streams are home to plentiful rainbow and brook trout. If you’re lucky, you may even catch a brown or golden trout while fly fishing in the wilderness.

However, it’s important to keep in mind that the Desolation Wilderness has a rich history of human inhabitation. While the region is now considered a “wilderness area,” the Washoe (Wašišiw) people have called the region home since time immemorial.

Although the area’s “wilderness” designation now prohibits human inhabitation, the Washoe people lived and survived off of the land in the Desolation Wilderness for millennia until the arrival of European settlers. There are still plenty of obsidian arrow points and other artifacts in the Desolation Wilderness from when the Washoe people lived in the region before they were pushed out by incoming settlers.

By the 1800s, however, European settlers had made their way to the area that would later become the Wilderness. Gold Miners flocked to the area in the hopes of striking it rich but found only a handful of low-quality deposits.

Cattle grazing then became the main economic driver in the region, reaching its height around the turn of the century. The first dam in the area was built in 1875 and created what is now known as “Lake Aloha.” In the 75 years after the first dam was built, a handful of others were built to attempt to stabilize seasonal water flows so people could have better fishing opportunities all year long.

The early European settlers called the region “Devil’s Basin.” The value of the area was recognized early on by these settlers, and the General Land Office even set aside the region as a Forest Reserve in 1899. By 1920, the reserve officially became part of the Eldorado National Forest and by 1931 it was designated a roadless “Primitive Area” by Congress.

The region is now a highly popular outdoor recreation area for hikers, climbers, and anglers. However, due to its wilderness status and popularity, the Desolation Wilderness has a number of regulations, including:

Additionally, permits are required for any visitors to the Desolation Wilderness. Day-use permits are free and can be self-issued at most trailheads in the summer. Overnight permits, however, are subject to a fee and can be reserved online.

With a vast network of trails and trailheads, the Desolation Wilderness is certainly an outdoor recreationist’s paradise. Whether you go to the Wilderness to climb, fish, or just enjoy the scenery, any trip to the area is sure to be an adventure.

There are dozens of hiking trails in the Desolation Wilderness. Here are some of the most popular hiking areas in the region:

The Tahoe Rim Trail is a 165 mile (266km) long trail that follows a loop path around the Lake Tahoe Basin and the Carson Range. The trail involves large elevation changes, from the low-lying outlet of Lake Tahoe to the summit of Relay Peak.

As the highest peak in the Desolation Wilderness, hiking to the top of Pyramid Peak is pretty popular in the summer months. However, the hike is fairly challenging due to the trail’s steepness.

The trail from Rocky Canyon is the most direct path to the summit of Pyramid Peak. The trail starts from Highway 50 near Strawberry Lodge and follows a 3.5 mile (5.6km) path that gains over 4,000ft (1,333m) of elevation.

While the trail is very easy to follow, it is not an official trail so it can be tricky to find the trailhead. But, after a few hours of climbing, you can stand on top of the tallest peak in the Wilderness and take in the amazing views.

If you’re looking for a nice overnight trip or a long day hike, this trail to Lake Aloha might be what you need. This 13-mile (20km) roundtrip trail starts out with a sustained climb. After 3 miles (4.8km) of hiking, you can opt for a side trip up Ralston Peak, if you’re looking for a bit of an adventure.

Should you choose not to continue up Ralston Peak, you’ll keep hiking toward Lake Aloha. Eventually, the trees open up and you get great views of Lake of the Woods and Pyramid Peak to reward you for your efforts. After about 5 miles (8km), you reach the PCT, where the trail is easy to follow until you make it to the lake so you can set up camp for the night.

If you’re looking for a place to stay before or after your trip into the Desolation Wilderness, check out these nearby cities:

Reno is located in northwestern Nevada, just north of Lake Tahoe and the Desolation Wilderness. The city is home to over 225,000 people and is well known for its casino and tourism industry. Reno is well connected by highways and has a bustling airport that offers good connections to cities around the American west.

Carson City has a population of over 55,000 people. It is located just east of Lake Tahoe and to the northeast of the Desolation Wilderness. Carson City is about a 90-minute drive from trailheads in the eastern part of the Wilderness, so it’s a good place to start your adventure. Plus, it’s easy to get to Carson City by car if you fly into Reno.

Located, as the name suggests, along the southern edge of Lake Tahoe, South Lake Tahoe is a city of over 20,000 people. South Lake Tahoe is just east of the Desolation Wilderness and is a bustling mountain town that’s the perfect basecamp for any trip into the region. There are plenty of hotels, campgrounds, restaurants, and stores in the town so you can get whatever you need for your trek into the mountains. 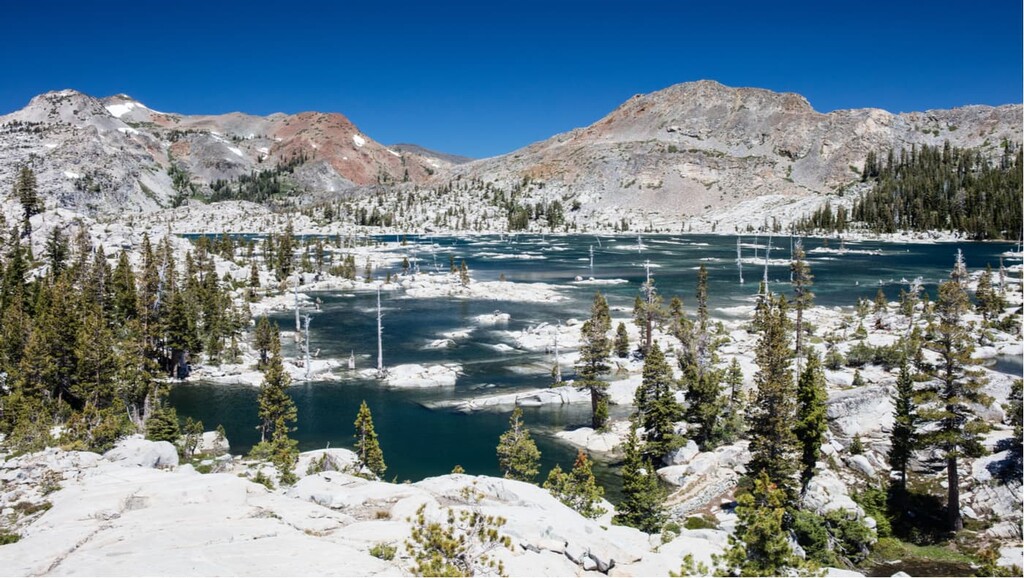 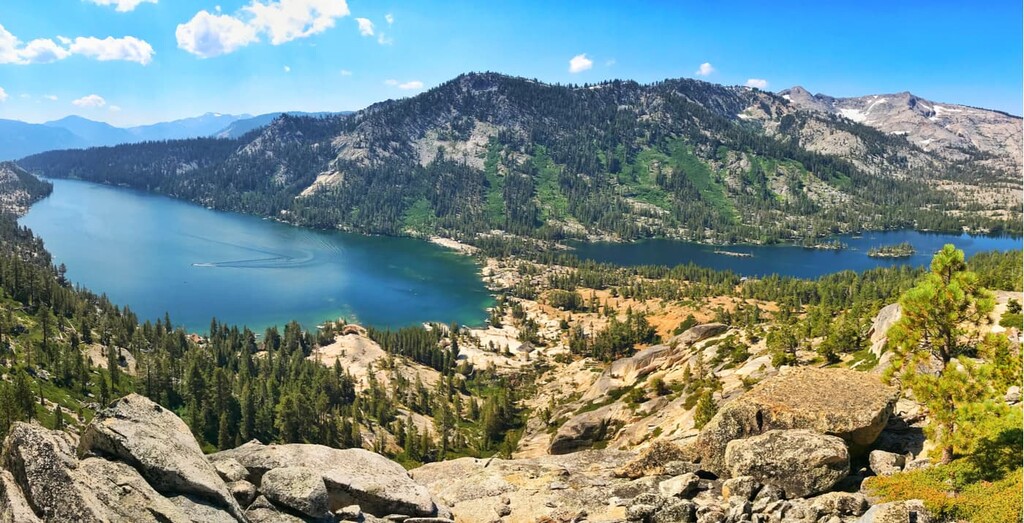 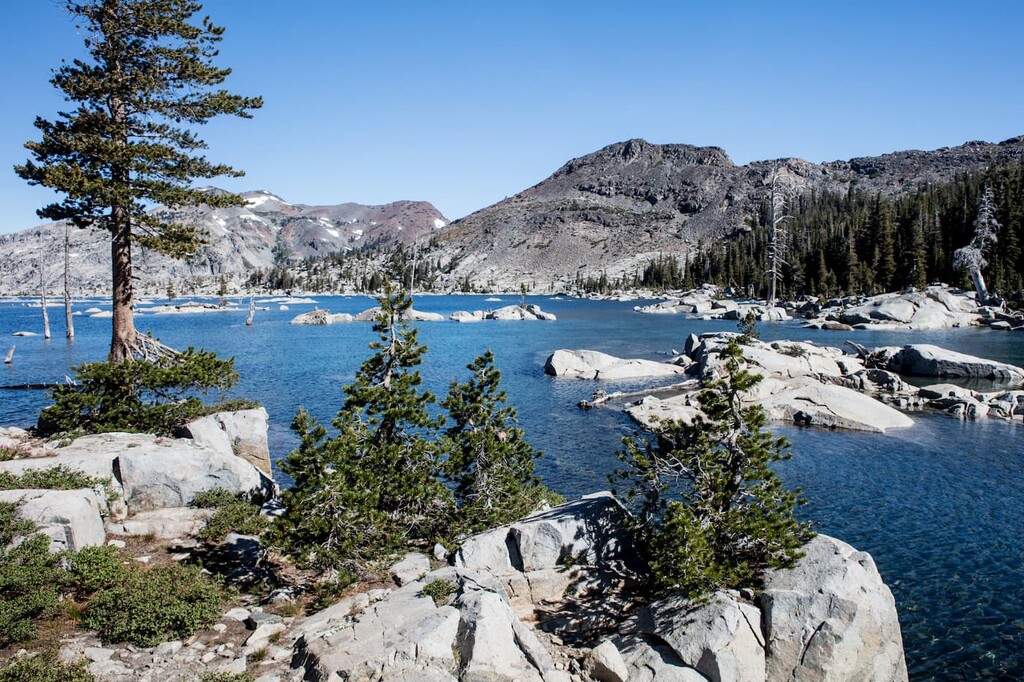 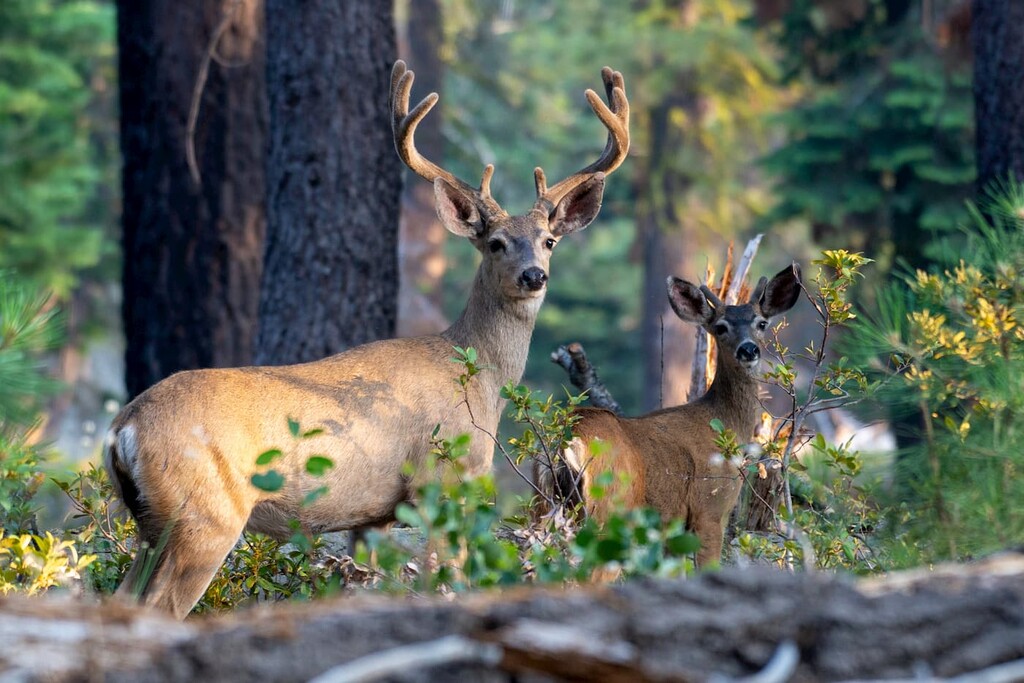 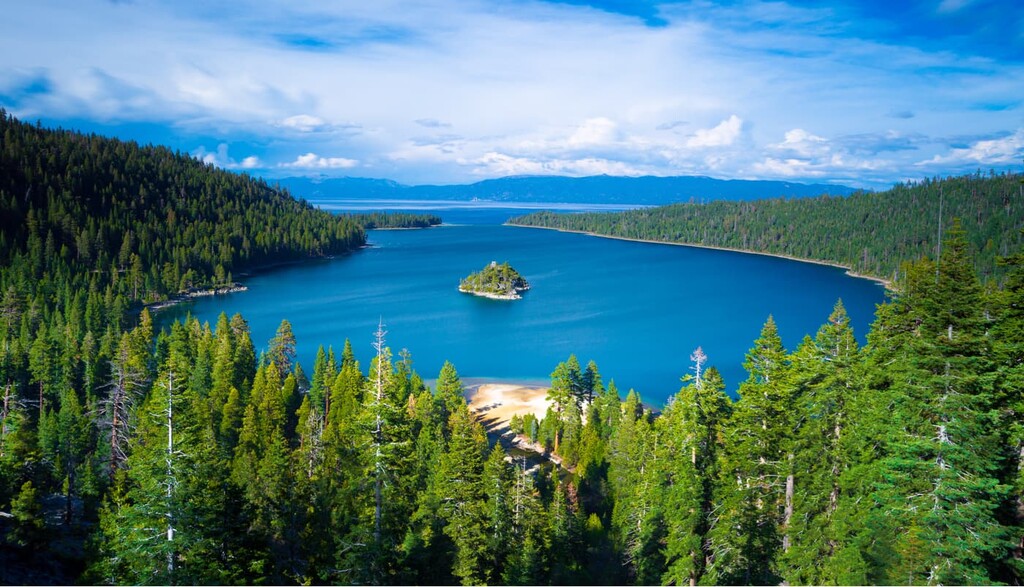 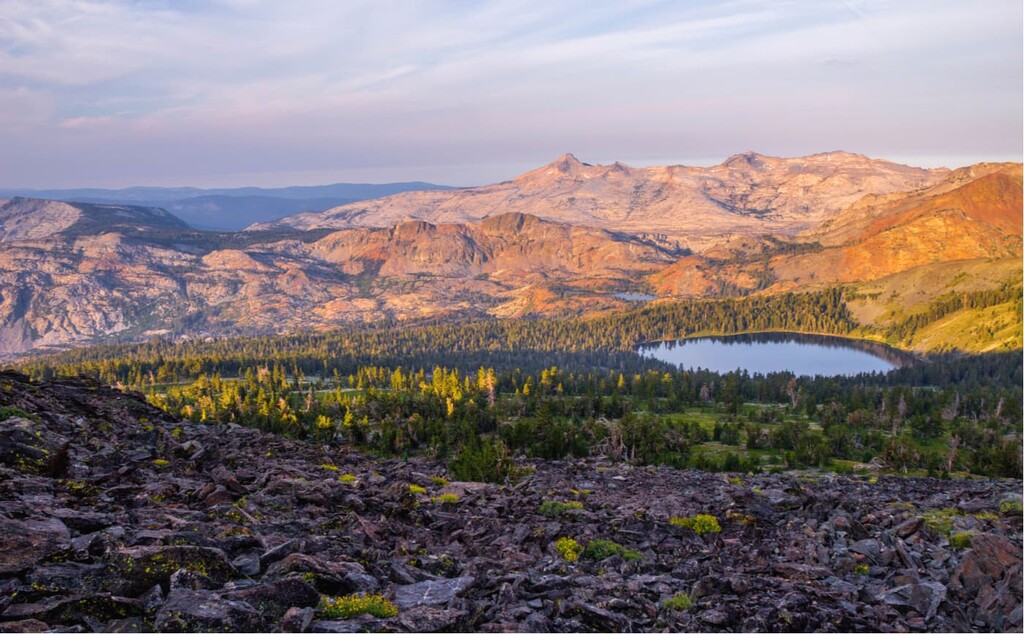