La Garita Wilderness Area is a protected region and outdoor recreation destination located within the Gunnison and Rio Grande National Forests of southwestern Colorado in the US. The tallest and most prominent point in the region is San Luis Peak at 14,019 ft (4,273 m) in elevation and with 3,114 ft (949 m) of prominence. 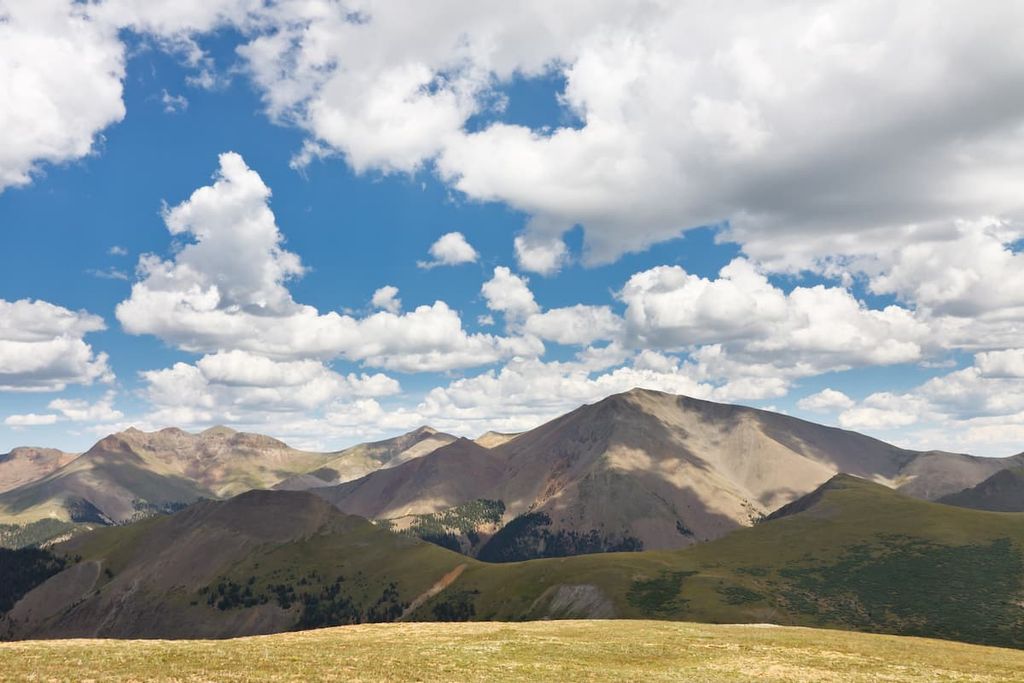 La Garita Wilderness Area encompasses 129,626 acres (524.58 sq. km) of land across western Colorado within the Southern Rocky Mountains. The wilderness is surrounded by national forests, and various other wilderness areas.

The name La Garita means “the lookout” in Spanish. This name was given to the wilderness due to the exceptional views from the summit of San Luis Peak.

The steep hillsides in the wilderness are often heavily forested, providing the ideal habitat for many animals. These dense patches of forests are met with rocky summits and ridgelines that can be found throughout the wilderness.

At higher elevations, there are often vast alpine meadows, scree fields, and barren hillsides, along with small creeks and streams. Various mountains, plateaus, and mesas define the landscape throughout much of the wilderness.

The Wason Park and Silver Park regions of the wilderness are home to ancient forests and alpine meadows. From the summits within the wilderness, hikers have views of the upper Rio Grande Valley and the San Luis Valley.

The mountains and rock formations found in the wilderness date back to the Precambrian. Rocks that date back to time are generally found near the core of these peaks while the outer layers of rock are typically from the Cenozoic era.

The San Juan Mountains dominate much of southwestern Colorado. Their volcanic history dates back 30 million years. Continual folding of the Earth’s crust created immense pressure in the region, causing magma to thrust upward, eventually forming the range that we see today.

Other signs of volcanic activity can be seen by the many plutons found in the wilderness. During the last glacial maximum, much of the San Juan Mountains were heavily glaciated. As the glaciers melted, the landscape was transformed into steep slopes, deep valleys, and vast box canyons.

The region was mined heavily for silver and gold during the 1860s and 1870s. Today, many of these communities have been transformed into mountain towns that have economies centered around outdoor recreation.

The varying landscapes throughout the wilderness allows for a variety of both flora and fauna to thrive.

Many of the summits in the wilderness have minimal vegetation. If anything, these summits feature low growing grasses. These barren peaks allow hikers to have panoramic views of the wilderness and the surrounding San Juan Mountains.

The land within the La Garita Wilderness Area has a long and rich human history dating back thousands of years.

The land is part of the homelands of the Ute people who have lived in the San Juan Mountains since time immemorial. The Ute traditionally lived at higher elevations during the summer and the valleys during the winter.

The seasonal walking paths created by the Ute were later used by Spanish and US settlers who traveled into the region during the last few hundred years. Spanish settlers arrived during the eighteenth century in hopes of mining the San Juan Mountains for silver.

Shortly after, in the 1820s, Americans of European descent arrived in the San Juan Mountains. Many of the first settlers were fur trappers and explorers. Fur trappers, such as Kit Carson, soon learned of the promise of mining opportunities in the region.

By the 1860s, the Charles Baker Expedition had discovered gold in the western San Juan Mountains. This discovery quickly led to an influx of miners into the range. A majority of these settlers and miners disregarded the Ute's claim to their ancestral homelands.

The Brunot Agreement was later negotiated between the US and the Ute in 1873. It technically provided the Ute with 3.5 million acres (1.4 million ha) of land within the region. Despite the agreement, the settlers of European descent repeatedly harassed, displaced, and attacked the Ute. Many Ute were forced off of their ancestral homelands and onto reservations.

La Garita Wilderness Area is home to numerous hiking trails. Here are some of the most popular hiking areas in the range:

The San Luis Summit Trail takes hikers to the tallest peak in the wilderness. The route is 11.2 miles (18 km) long and has 3,490 feet (1,064 m) of elevation gain. The route follows along the south ridge that departs from the West Willow Creek Trailhead.

Most of the trail lies above the treeline, allowing for panoramic views throughout. Rolling meadows give way to scree fields and barren peaks. As San Luis Peak is the tallest peak in the wilderness, this trail offers views of the surrounding wilderness, mountains, and valleys.

The Wheeler Trail in La Garita Wilderness is 17 miles (27 km) long round trip with 3,100 feet (945 m) of elevation gain. Though it can be completed in one day, many hikers use the route for a multi-day backpacking trip.

Hoodoo rock formations can be seen throughout the hike as the trail winds through the forested sections of the wilderness. Sightings of deer and elk are common on this route, too.

Looking for a place to stay near La Garita Wilderness Area? Here are some of the best cities and villages to check out in the region:

The city of Gunnison is located near the center of the Gunnison National Forest, to the north of the wilderness. Similar to many mountain towns in the region, Gunnison is a mecca for outdoor activities. The city is home to around 6,500 people, and it is a popular destination among tourists to the region.

Besides being surrounded by national forest, Gunnison is also located within close proximity to many ski resorts, and numerous wilderness areas. The city can be a home base for exploring much of the San Juan Mountains. Additionally, the hundreds of miles of trail in the region provide the perfect setting for hiking, trail running, backpacking, and mountain biking.

The Blue Mesa Reservoir is located near Gunnison. It happens to be Colorado’s largest body of water. The reservoir provides locals and visitors alike with numerous opportunities for water sports. Black Canyon and Harmans Rocks Recreation Area are both located near Gunnison, and they provide thousands of acres for rock climbers to explore.

Located to the southwest of the wilderness lies the city of Durango. With a population of 19,000 people, Durango is one of the most populated cities in the region. Durango sits at the confluence of the Colorado and Gunnison Rivers, and it is home to Fort Lewis College.

The city’s close proximity to mountains and water allow Durango to be a hub for outdoor sports throughout the year. Similar to other Colorado mountain towns, Durango is surrounded by thousands of miles of trails for hiking, backpacking, running, and mountain biking.

While in the city, check out Durango’s Main Avenue, which is full of locally owned businesses, restaurants, and bars. Each year, the city hosts a number of events, such as the Snowdown Festival, Music in the Mountains, and the Durango Ragtime & Early Jazz Festival. 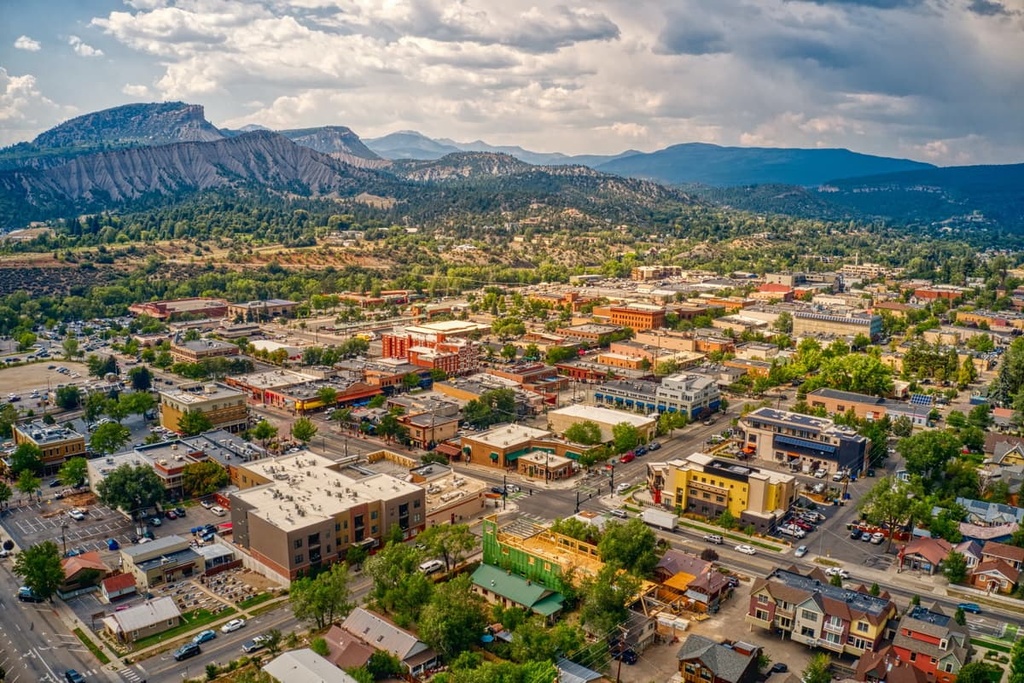 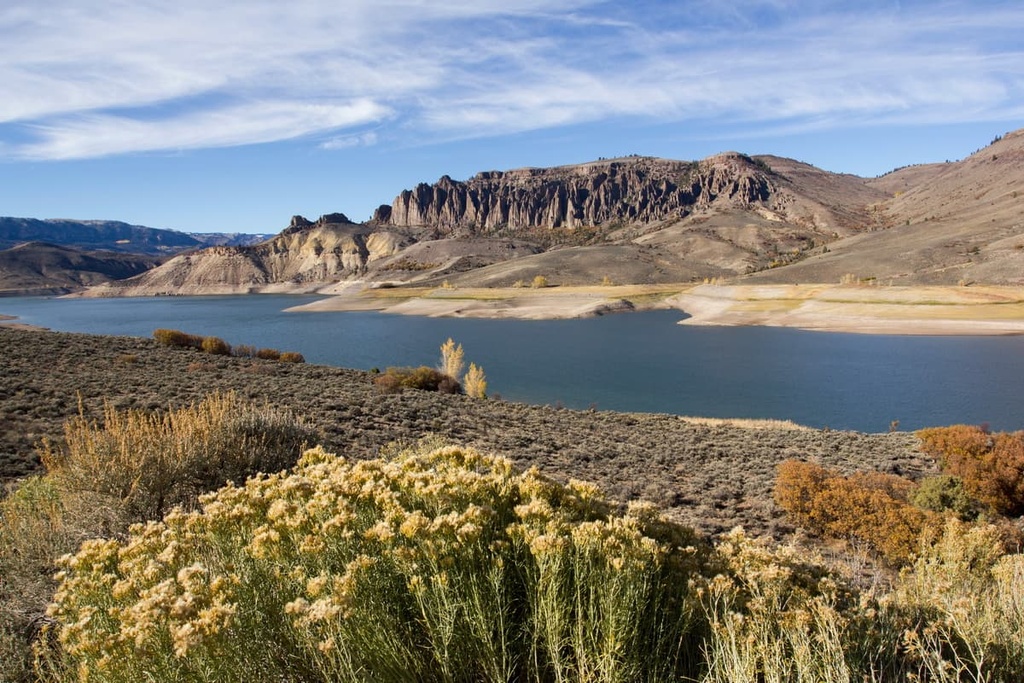 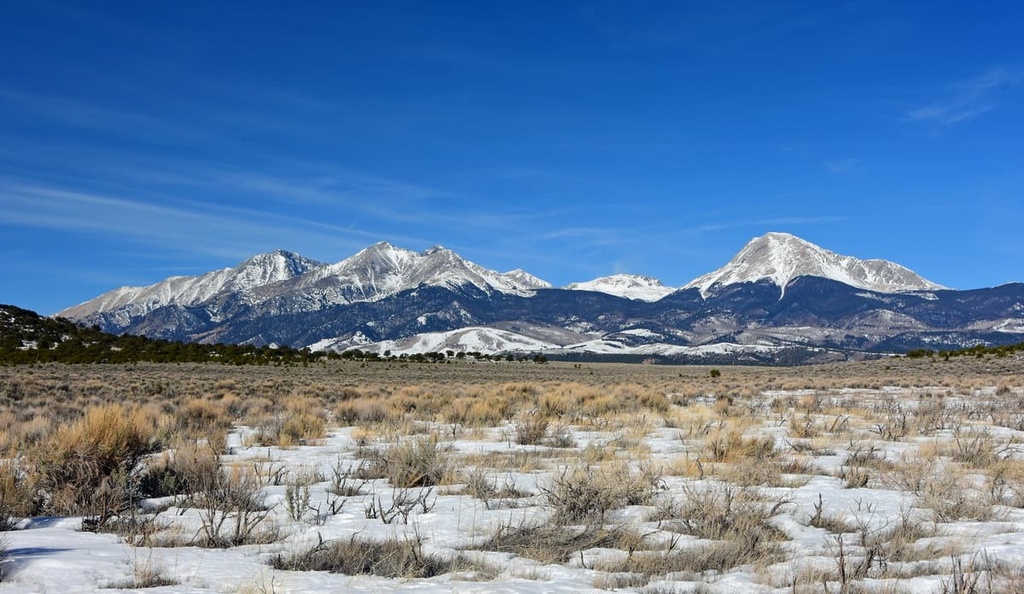 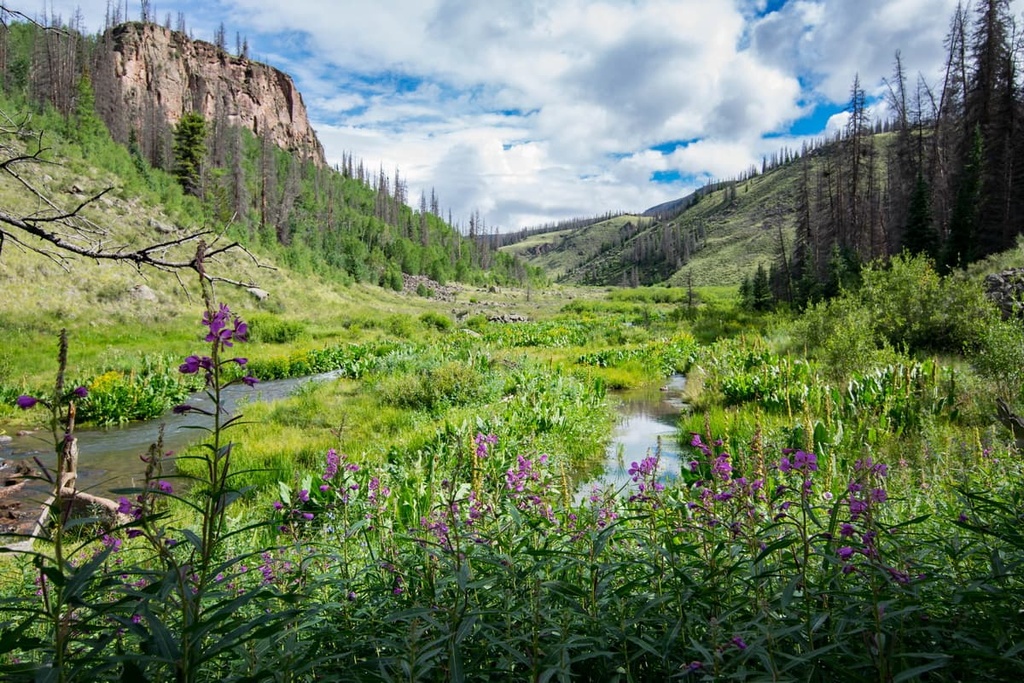 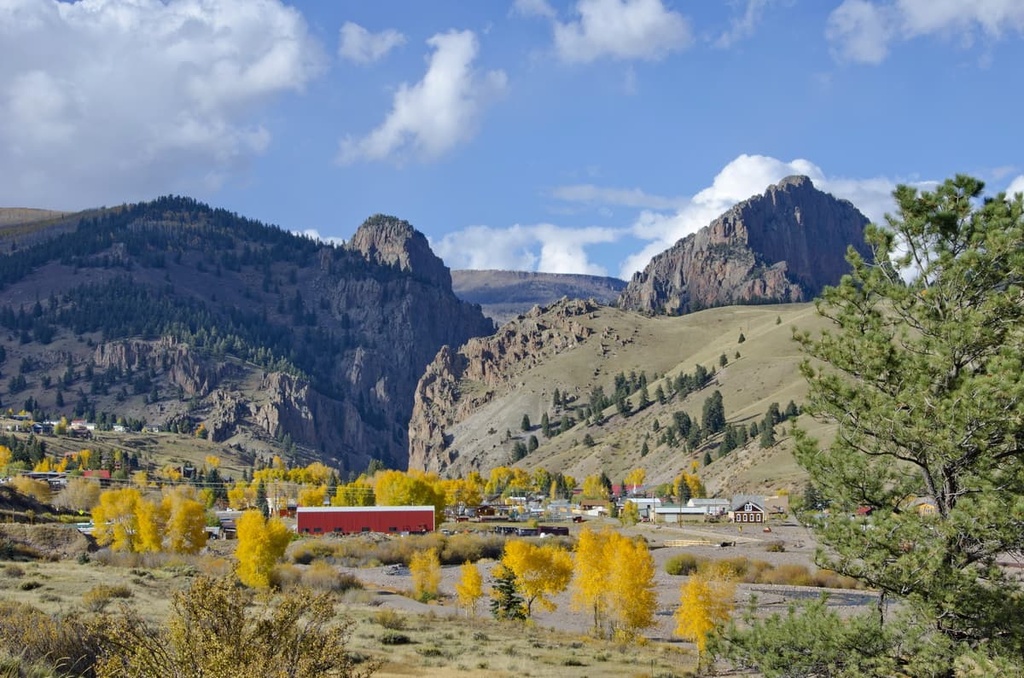 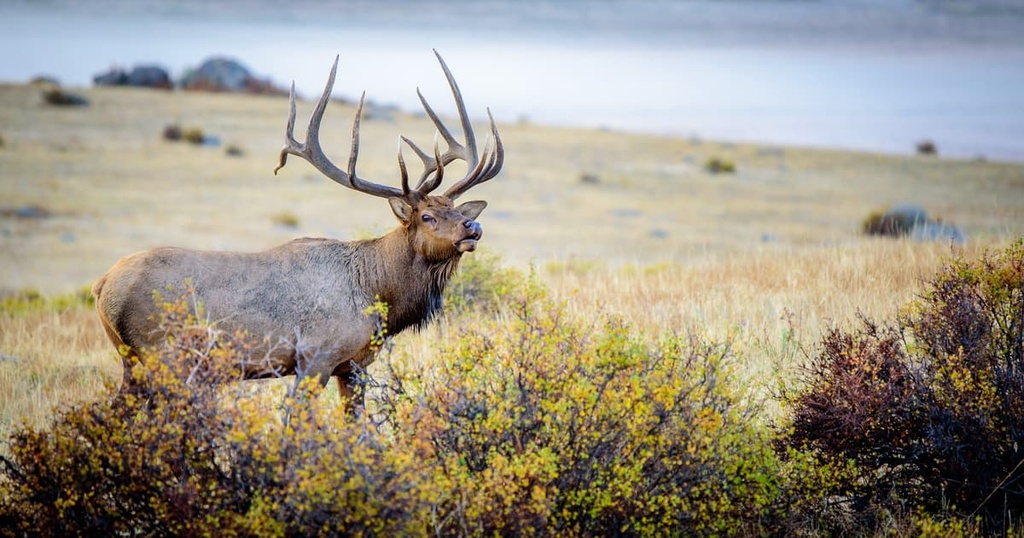