The Gunnison National Forest is a protected area situated in the western part of the US state of Colorado. The forest lies within the Southern Rocky Mountains, which run throughout the western side of the state. The tallest peak in the forest is Half Peak at 13,868 ft (4,227 m) in elevation. The most prominent peak is Huntsman Ridge with 2,992 ft (912 m) of prominence.

The Gunnison National Forest is a federally managed area that’s located in western Colorado within the Southern Rocky Mountains.

The forest encompasses 2,613 sq. miles (6,767 sq. km) of land and is surrounded by numerous other national forests. Today, the Gunnison National Forest is also administratively combined with the Grand Mesa and Uncompahgre National Forests.

Steep rolling hills mark much of the landscape in the forest. Meanwhile, rocky summits are coupled with forested ridgelines throughout the region.

While woodland areas are present throughout Gunnison National Forest, the forest is also home to vast open pastures, scree fields, and barren hillsides. A majority of the summits within the forest are free of trees, allowing for panoramic views while you hike.

Mountains, mesas, and plateaus define the region and its plethora of hiking trails. Within the Gunnison National Forest, there are numerous ghost towns that thrived during the region’s Gold Rush.

There are seven wilderness areas that have land within the forest. However, just Fossil Ridge Wilderness and West Elk Wilderness are located entirely within Gunnison National Forest.

The rock formations and mountains within the forest date back to the Precambrian period. These rocks are often found in the core of the peaks while younger rocks from Cenozoic comprise outer layers of the mountains.

Glacial retreat further carved out the range leaving behind the deep valleys, steep slopes, and box canyons. During the 1860s and 1870s, the peaks within the range were heavily mined for both silver and gold.

The varied topography throughout the forest allows for a variety of both flora and fauna to thrive.

The lower elevations within the forest are dominated by dense patches of drought-resistant trees and shrubs. As elevations in the region increase, the vegetation begins to thin out, leaving room for cliff sides that are covered in low growing grasses, wildflowers, and scree fields.

The summits in Gunnison National Forest are home to minimal vegetation. At such high elevations, these barren peaks provide hikers with panoramic views of the forest and surrounding protected areas.

A wide variety of animals inhabit the region including elk, bighorn sheep, mule deer, and moose. During the summer months, these mammals migrate to the lower elevations to feast on the abundance of available food.

Other common animals include marmot, ground squirrel, mountain lion, and black bear. Various species of eagles, falcons, and song birds inhabit the skies of the forest, too, feasting on smaller animals and summer berries.

Humans have lived on the land surrounding what is now the Gunnison National Forest for thousands of years.

The land is the traditional territory of the Ute, who historically lived throughout the San Juan Mountains. They traveled throughout the mountainous landscape, often living in the higher elevations during the summer months and retreating to the valleys during the winter.

Many of the paths created by the Ute over the course of countless generations would later be traveled by the Spanish and American settlers in the region. Throughout the eighteenth century, Spanish settlers arrived in the San Juan Mountains in hopes of mining them for silver.

During the 1820s, more European expeditions came to the region, mainly led by fur trappers who were searching for beavers. During this time trappers and traders, including Kit Carson, spoke of the promise of gold and silver throughout the San Juan Mountains.

In 1860, the Charles Baker Expedition found gold in the western San Juans. Word of this discovery led to an influx of miners to the range. These explorers generally disregarded the Ute’s claim to the land and pushed them off their homelands.

Shortly after in 1873, the Brunot Agreement was negotiated. This agreement provided the Ute people with around 3.5 million acres (1.4 million ha) of land within the San Juan Mountains and gave them the right to hunt on the land in perpetuity.

Despite this agreement, the Ute were murdered, harassed, and pushed off of their ancestral lands. Many of the Ute were forced onto reservations in southern Colorado.

Meanwhile, settlements continued to grow rapidly in the region, giving way to the multitude of small mountain towns that are now present throughout all of western Colorado. The Gunnison National Forest was established in 1905 out of the lands that were once the Cochetopa Forest Reserve.

The Gunnison National Forest is home to numerous hiking trails. Here are some of the most popular hiking areas in the range:

The Judd Falls Trail is one of the most popular hiking routes in the national forest. This out-and-back trail is 2.2 miles (3.5 km) long with 462 feet (141 m) of elevation gain. Though short, this route offers a true look inside the diverse landscapes of the Gunnison National Forest.

Along the trail, dense patches of forest are coupled with rolling grassy fields, while rugged buttes tower above. The falls are best visited during the spring and summer months where hikers can see them rushing between the rugged and rocky landscape.

The Snodgrass Mountain Trail is a 5.8 mile (9.3 km) out-and-back hike with 1,594 feet (486 m) of elevation gain. The route is situated near Crested Butte. The first 2 miles (3.2 km) of the trail offer views of the surrounding mountains alongside the valley down below.

Aspen trees line the route throughout this section, though the summit of Snodgrass Mountain is heavily forested with evergreen trees. Hikers have the option to descend the way they came or to take a small detour, the latter of which offers slightly different views.

The Oh-Be-Joyful Trail is a longer route within the forest that can be used for both day hiking and backpacking. The trail is 14 miles (22.5 km) long with 2,286 feet (697 m) of elevation gain.

On this trail, hikers will wind their way through expansive alpine pastures while snow covered buttes and ridgelines tower overhead. The trail reaches a gentle sloping waterfall before finally arriving at Blue Lake where campgrounds are available.

Looking for a place to stay near the Gunnison National Forest? Here are some of the best cities and villages to check out in the region:

The town of Gunnison is situated near the center of Gunnison National Forest. The city has a population of around 6,500 people and is a mecca for outdoor recreation. Surrounded by ski resorts, national forests, and designated wilderness, Gunnison can act as a home base for exploring much of the region.

Hiking, trail running, backpacking, and mountain biking are all popular activities in the area due to the hundreds of miles of designated trails in the region.

Blue Mesa Reservoir, Colorado’s largest body of water, is also located near Gunnison, providing the opportunity for various water sports. Nearby Black Canyon and Harmans Rocks Recreation Area both provide rock climbers with over 8,000 acres (3,200 ha) of granite to enjoy.

Located just to the west of Gunnison National Forest lies the city of Grand Junction. With a population of 65,000 people, Grand Junction is the most populous city in western Colorado. Situated along the confluence of the Colorado and Gunnison Rivers, the city is full of opportunities for outdoor recreation.

While at Grand Junction, visitors can also explore the nearby Colorado National Monument and the Grand Mesa National Forest.

Since the city is more populated than many of the surrounding mountain towns, it has become a hub for cultural attractions and cuisine. After a long day of adventuring in Colorado’s mountains, locals and visitors alike can relax at one of the many breweries within the city. 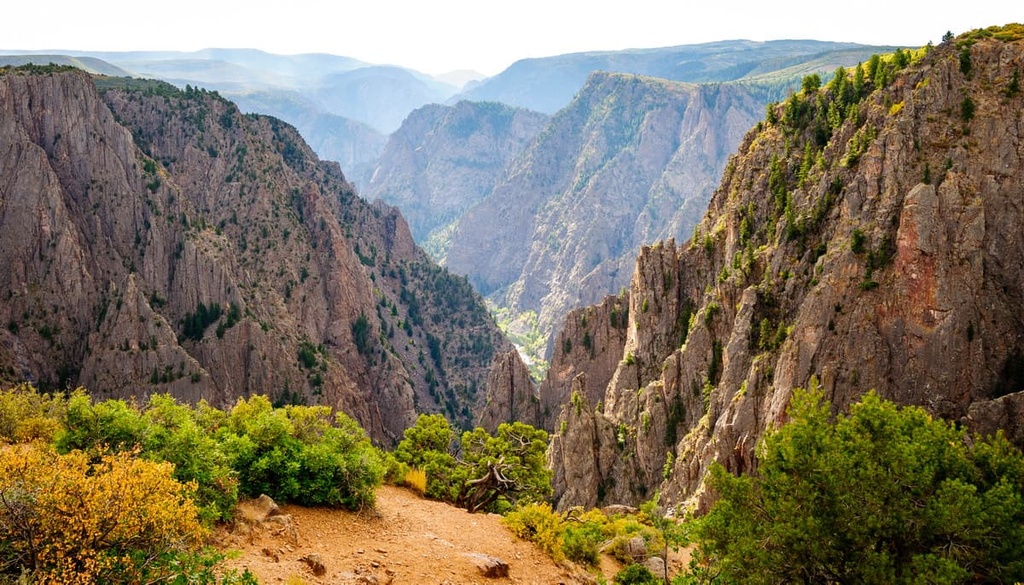 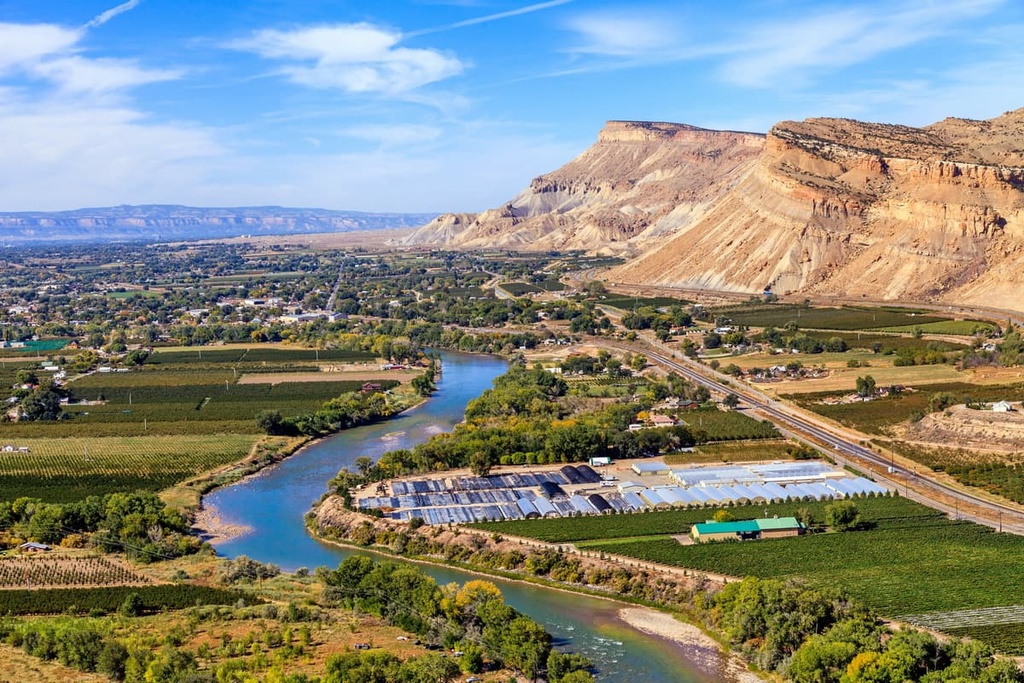 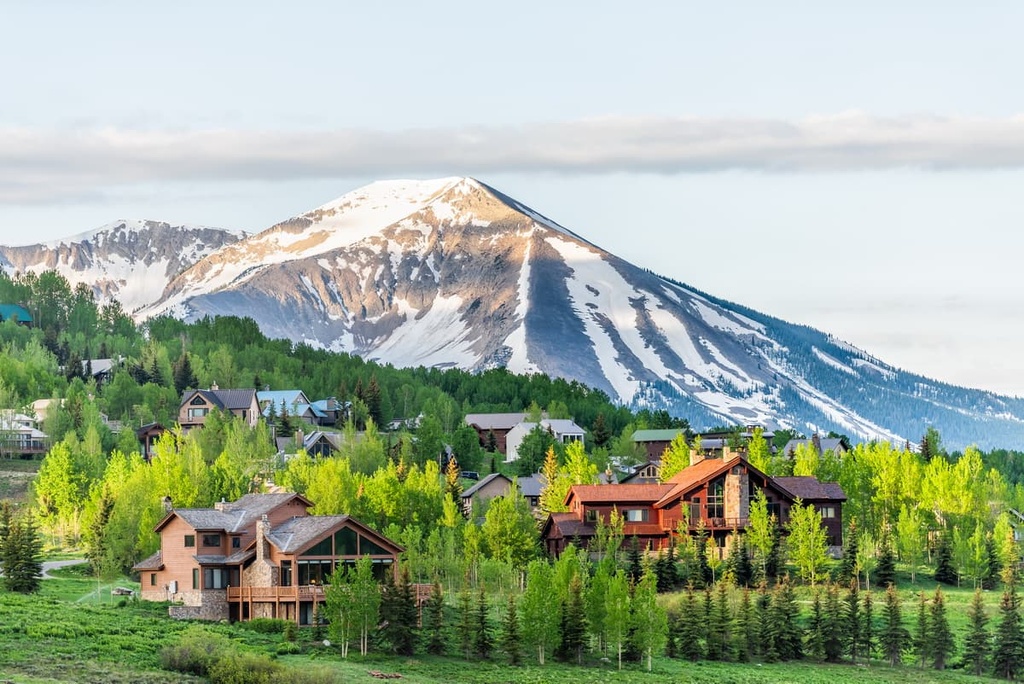 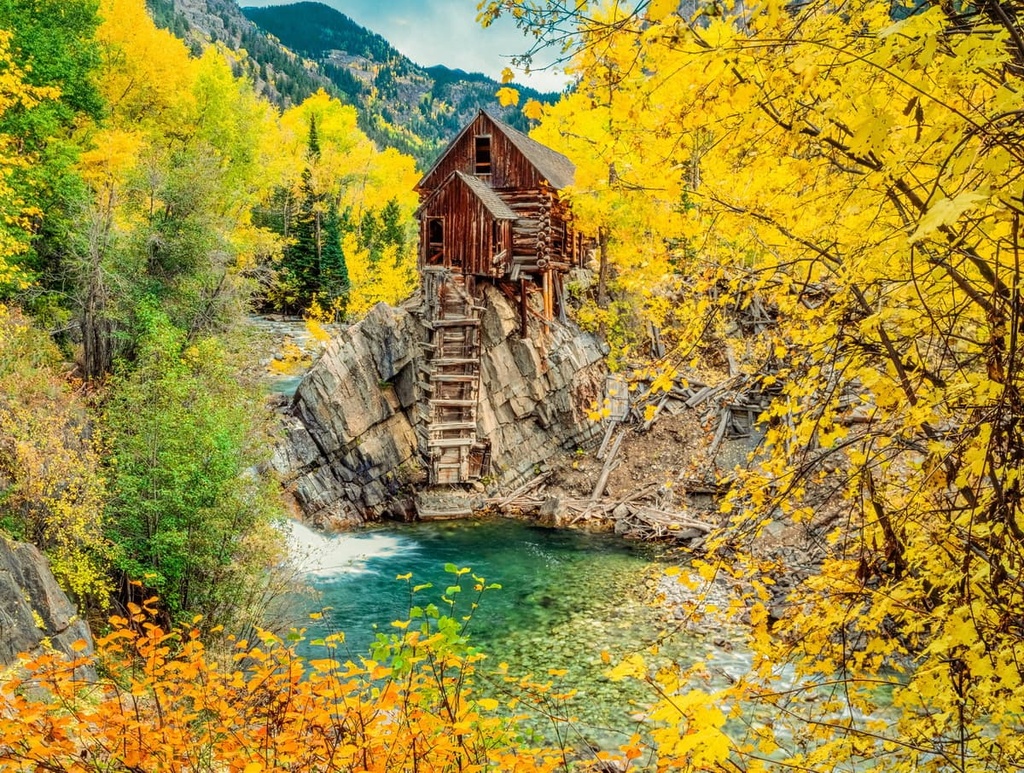 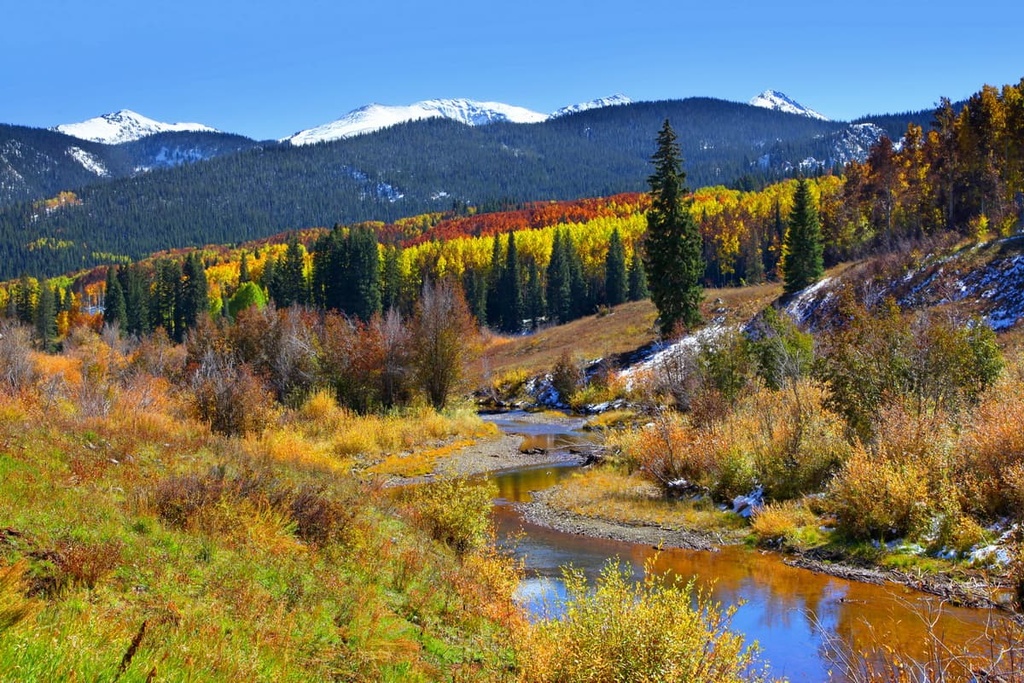 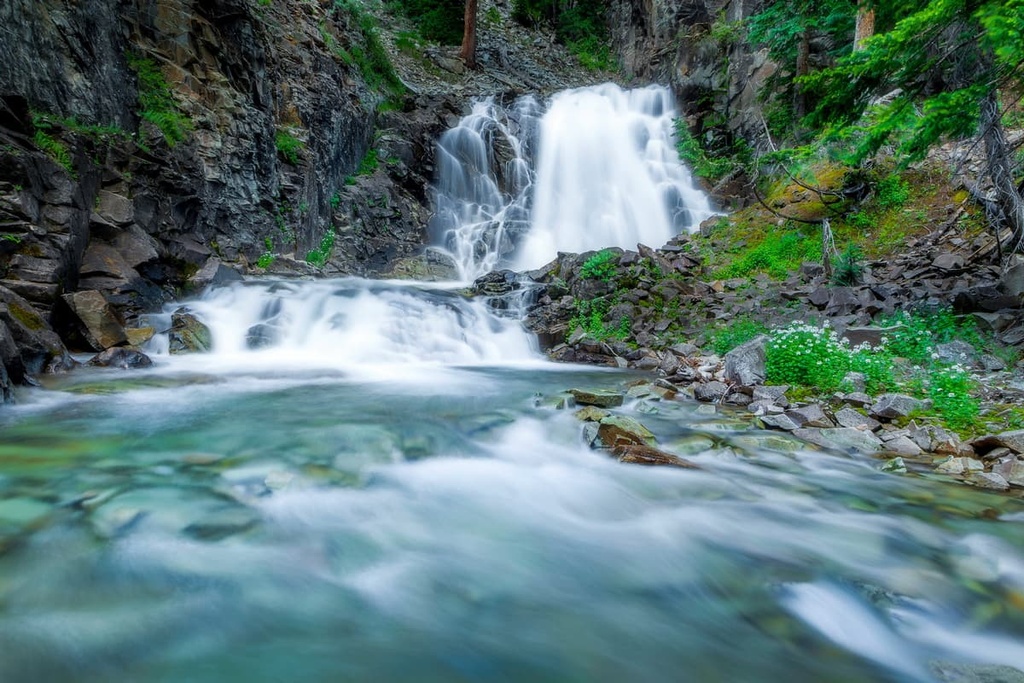