Running the length of Newfoundland's western coast, the Long Range Mountains are a series of peaks in the province of Newfoundland and Labrador in Canada. The range contains 288 named mountains, the highest and most prominent of which is The Cabox (813m/2,667ft). 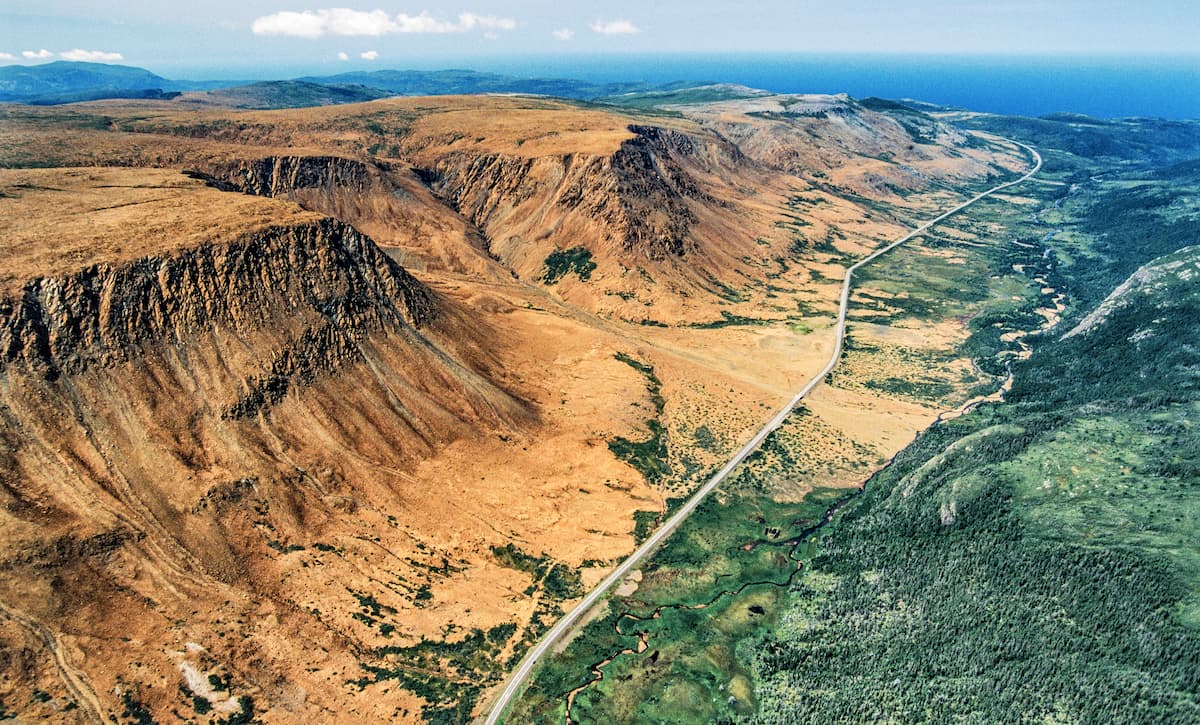 The Long Range Mountains are a collection of peaks and high points located on the west coast of the island of Newfoundland. Starting on the southwestern edge of the island near Cape Ray, the range extends for about 400km (250mi) to Cape Norman in the northwest.

On the island of Newfoundland, the Long Range Mountains comprise the most topographically rugged region. However, the central part of the island to the east is still quite rugged, albeit with rocky outcrops, lakes, and dense forest rather than the more drastic mountainous relief seen in the Long Range.

The Long Range Mountains are bordered to the east by the rest of Newfoundland's Canadian Appalachians.

To the west, it is separated from the province of Québec and from Labrador by the Gulf of the Saint Lawrence and by the Strait of Belle Isle. However, to the north, with the exception of the uninhabited Belle Island, there is nothing separating the northern tip of the Long Range Mountains from Greenland via the wide expanse of the Labrador Sea.

Meanwhile, to the south, the range is just a short distance from the French overseas collectivity of Saint Pierre and Miquelon, Cape Breton Highlands National Park on the northern tip of Nova Scotia, and the communauté maritime des Îles-de-la-Madeleine in Québec.

Within the Long Range Mountains, there are 2 notable areas of protected land: Gros Morne National Park and Barachois Pond Provincial Park. The range is also home to the L'Anse aux Meadows National Historic site which is a UNESCO World Heritage Site.

From a geological perspective, the Long Range Mountains are a subrange of the Canadian Appalachians, which are themselves a subsystem of the greater Appalachian Mountains which stretch from the US state of Alabamaall the way to Newfoundland and Labrador.

The Long Range Mountains have a unique and complex geological history that dates back to the Precambrian when a mountain building event led to the formation of an early ancestor of the range. These mountains have long since eroded, leaving behind some of the genesis and granites that we see in the region today.

Eventually, the supercontinent of Laurentia began to split apart from Baltica, forming a number of mafic dikes in the Long Range Mountains and likely instigating the formation of the Iapetus Ocean between Laurentia and Gondwana.

Over the period of about 100 million years, the region that would become the Long Range Mountains started to drift northward from the southern hemisphere toward its current location.

Throughout this period of drift, the region accumulated a large amount of sediment deposits that later formed a massive continental shelf. These sediments eventually formed the quartzites that can be seen in the Long Range, particularly in Gros Morne National Park on Gros Morne Mountain.

Later, as the Iapetus Ocean began to close up some 500 million years ago, a subduction zone formed on the edge of the ocean, forming a new oceanic crust along what is now the western part of the island of Newfoundland. Interestingly, the western part of the island of Newfoundland, in the Long Range Mountains (in the Bay of Islands), contains some ophiolites, or exposed sections of the oceanic crust and upper mantle on top of continental crust, which date back to this period of subduction.

More recently, during the Pleistocene, the Long Range Mountains have been particularly affected by repeated glaciation, which has molded the area's features into the landforms that we see today, such as the stunning fjords that dominate the range's western edge.

Major high mountains in the range include The Cabox, Gros Morne, Big Level, Round Hill, and Blue Rocks.

However, the range’s varied topography has also led to the formation of a number of different ecoregions including the Strait of Belle Isle ecoregion, the Northern Peninsula ecoregion, the Southwestern Newfoundland ecoregion, and the Long Range Mountains ecoregion

Encompassing the northernmost tip of the Long Range Mountains, the Strait of Belle Isle ecoregion has cold winters and cool summers with plenty of precipitation year-round.

This ecoregion includes sizable stands of dwarfed white spruce along the coastal plains while tamarack and black spruce are much more common along the inland portions of the region. Much of the ecoregion is also covered by bogs and wetlands.

The Strait of Belle Isle ecoregion is located along a major migratory bird route, so seabird sightings are common. Other notable wildlife in the region includes the arctic hare, the rock ptarmigan, and caribou.

Aptly named, the Northern Peninsula Ecoregion covers much of the northern half of Newfoundland’s western peninsula along the coast, with the exception of the northern coast, which is part of the Strait of Belle Isle Ecoregion.

This ecoregion has mild winters and cool summers and is dominated by balsam fir. At higher elevations, black spruce is also common, as are dwarf evergreen shrubs and black spruce on rocky outcroppings. Wildlife is common throughout this region and sightings of lynx, snowshoe hare, black bear, and moose are fairly likely.

Another aptly named ecoregion, the Southwestern Newfoundland Ecoregion is situated to the south of the Northern Peninsula Ecoregion along the western coast of the island. Cold, snowy winters and cool summers are the name of the game around here and there are some fairly dense forests as a result of the plentiful precipitation.

For the most part, the forests consist of balsam fir, though there are sizable stands of tamarack and black spruce in the region. The region serves as a good habitat for local wildlife, which include black bears, red fox, martens, caribou, moose, and lynx.

The Long Range Mountains Ecoregion is found throughout the range at higher elevations and from sea level to 815m (2,670ft) in the southernmost part of the range and on the inland sections of the northern peninsula.

Due to the region's rugged terrain, high elevations, and poorly drained soils, it is sparsely forested with large sections of moss barrens and heath. However, there are some sizable stands of dwarf black spruce, balsam fir, and kalmia in the region. This ecoregion is popular amongst outdoor recreationalists and it is a great habitat for caribou, particularly in the winter.

The Long Range Mountains and the island of Newfoundland have been home to humans for thousands of years. In particular, the Beothuk and their descendents, as well as the Mi’kmaq First Nation have lived in the region since time immemorial.

Moreover, the Long Range Mountains were also the site of one of the first European settlements in North America at L’Anse aux Meadows. Located on the northernmost tip of Newfoundland’s Great Northern Peninsula, L’Anse aux Meadows is home to the remnants of an 11th century Viking settlement.

Interestingly, the site was discovered in the 1960s after researchers followed the course set out by Vikings in some of the Icelandic Sagas to a place known as “Vinland.” These sagas eventually led them toward Newfoundland and to the discovery of a large settlement that is now a popular tourist destination.

In later centuries, a number of European countries and nations sent ships to Newfoundland as the island’s waters were known to have some of the best fishing opportunities in the North Atlantic. However, much of the activity was focused on the eastern shore of the island, leaving the Long Range Mountains and the Great Northern Peninsula mostly unsettled by non-Indigenous peoples until the 1800s.

During this time, the southernmost part of the range was a fairly popular destination among Scottish immigrants who had fled the Highland Clearances in Scotland, moved to Nova Scotia, and then migrated once again to the Codroy Valley.

Compared to the city of St. John’s on the eastern part of the island, the western side is less densely populated. However, there are plenty of small towns and cities throughout the Long Range Mountains. The region is a popular tourist destination and it has an economy that’s also based on fishing, mining, agriculture, and paper production.

There are plenty of great hiking areas in the Long Range Mountains. Here are some of the best places to check out:

Located in the west-central part of the Long Range Mountains, Gros Morne National Park is a federally-protected area and a UNESCO World Heritage Site. It contains 47 named mountains, the highest and most prominent of which is Gros Morne.

The park is well-known for its geological beauty, thanks to its rugged landscape and stunning fjords. Gros Morne is a popular hiking destination, with dozens of trails include Baker's Brook Falls, Gros Morne Mountain Trail, and the Long Range Traverse.

Situated in the southern section of the range, Barachois Pond Provincial Park is one of the largest provincial parks in Newfoundland and Labrador. It boasts a stunning lake which offers plenty of boating, fishing, and swimming opportunities, as well as hiking on the popular Erin Mountain Trail.

The Long Range Mountains are home to a number of small towns and villages, which make for an excellent starting point for your adventures into the range. Here are some of the best places to visit in the area.

The city of Corner Brook is located in the central part of the Long Range Mountains. It is home to approximately 20,000 residents, as well as the headquarters of the Qalipu Mi'kmaq First Nation.

Corner Brook is the smallest of the 3 cities in Newfoundland, though it is the northernmost city in Atlantic Canada. The city is home to the Memorial University of Newfoundland's Grenfell Campus, which has created a strong arts community in the region.

There is a small regional airport, Deer Lake Regional Airport located to the north of the city, which services flights to Halifax, Toronto, and smaller airports around Atlantic Canada. Corner Brook is also located along the Trans-Canada Highway.

Stephenville is situated in the southern part of the Long Range Mountains along the coast of St. George's Bay. It is home to about 6,600 residents, however, it serves as a commercial center for much of the southwesternmost part of Newfoundland.

The town is accessible by road and there is a bus service that connects Stephenville to other parts of the island. Moreover, the Stephenville Airport is located just outside the town and it has regular service to Halifax and Saint-Pierre et Miquelon.

Although it’s located on the far eastern side of the island, approximately 6.5 hours from Gros Morne National Park, the city of St. John’s is the largest and most populous in the province with some 219,000 residents in its metropolitan area.

The city is a major center for culture, commerce, education, and tourism on the island, thanks to its bustling downtown area. St. John’s is also a major seaport for the region and it has an international airport which is the second busiest in Atlantic Canada. 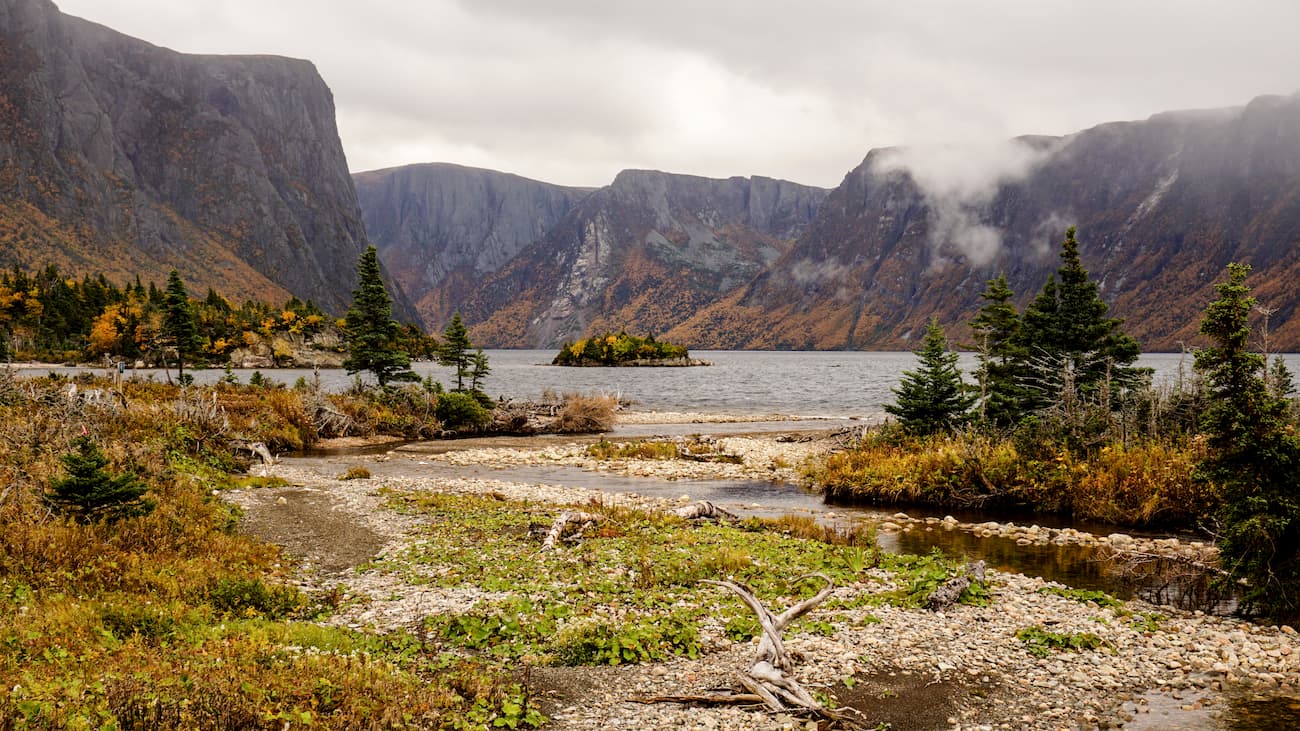 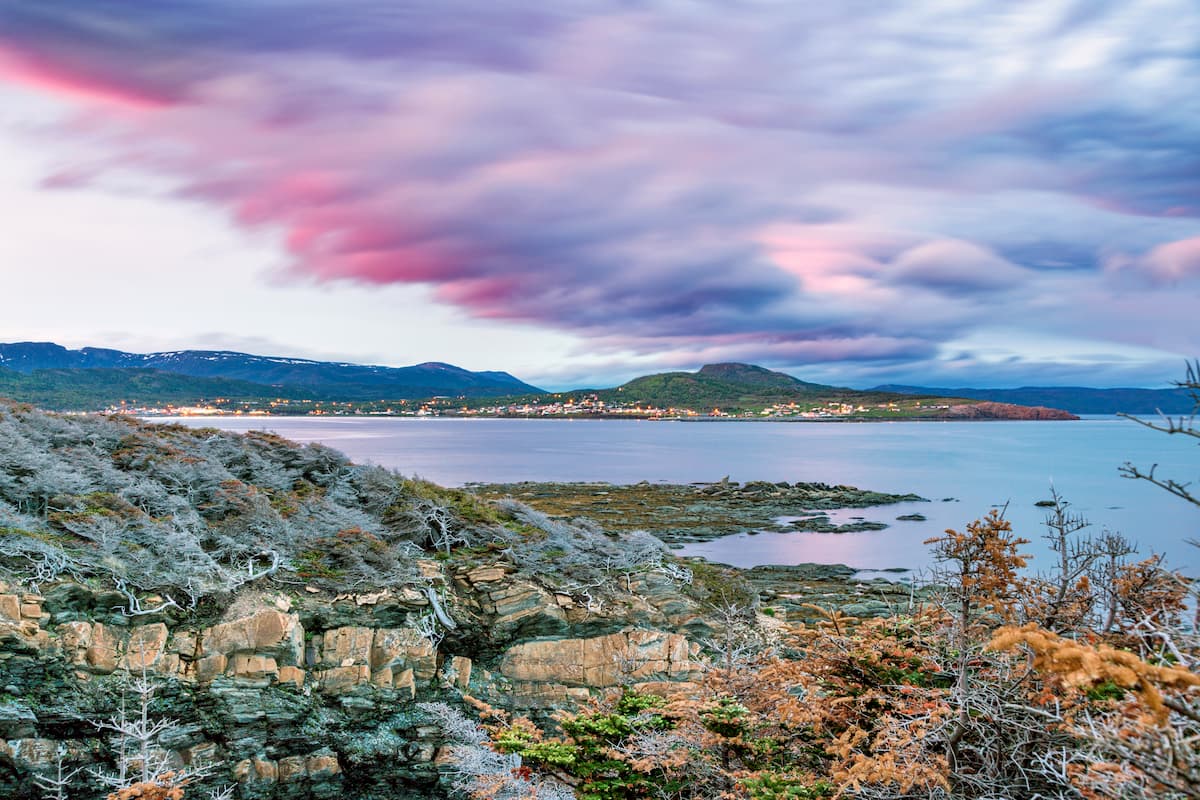 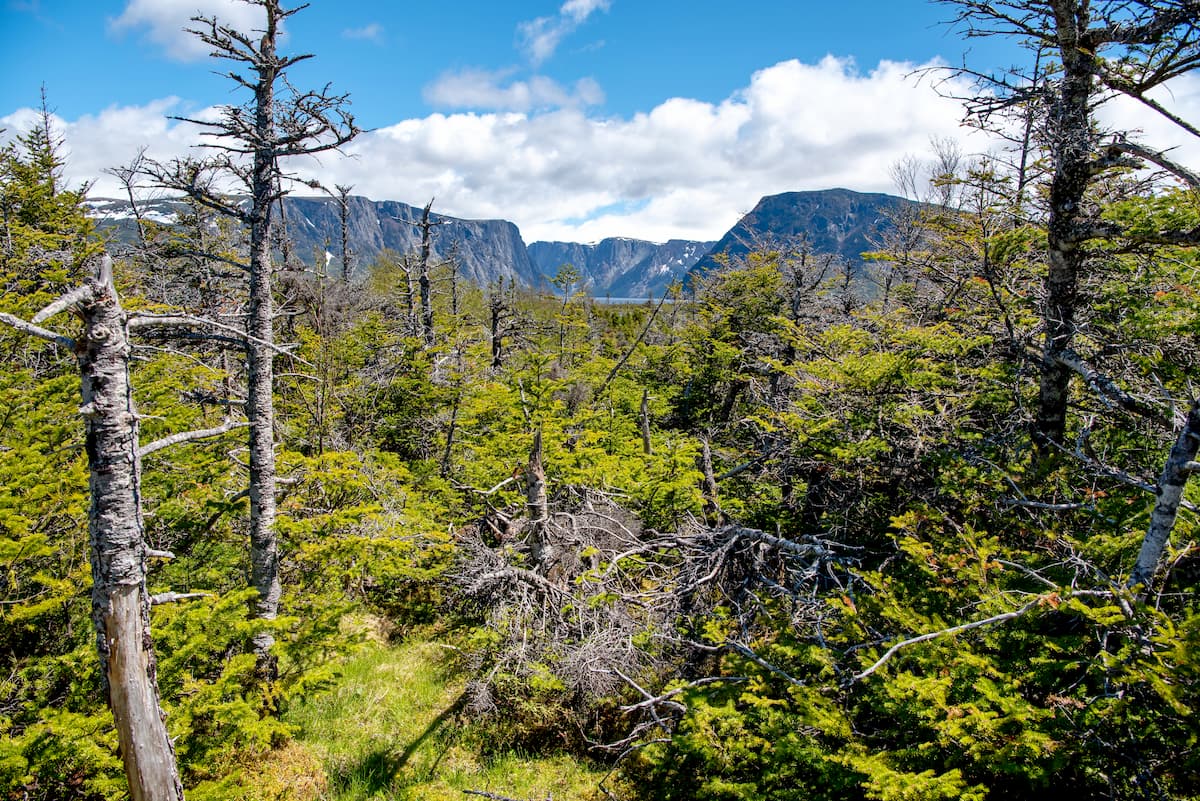 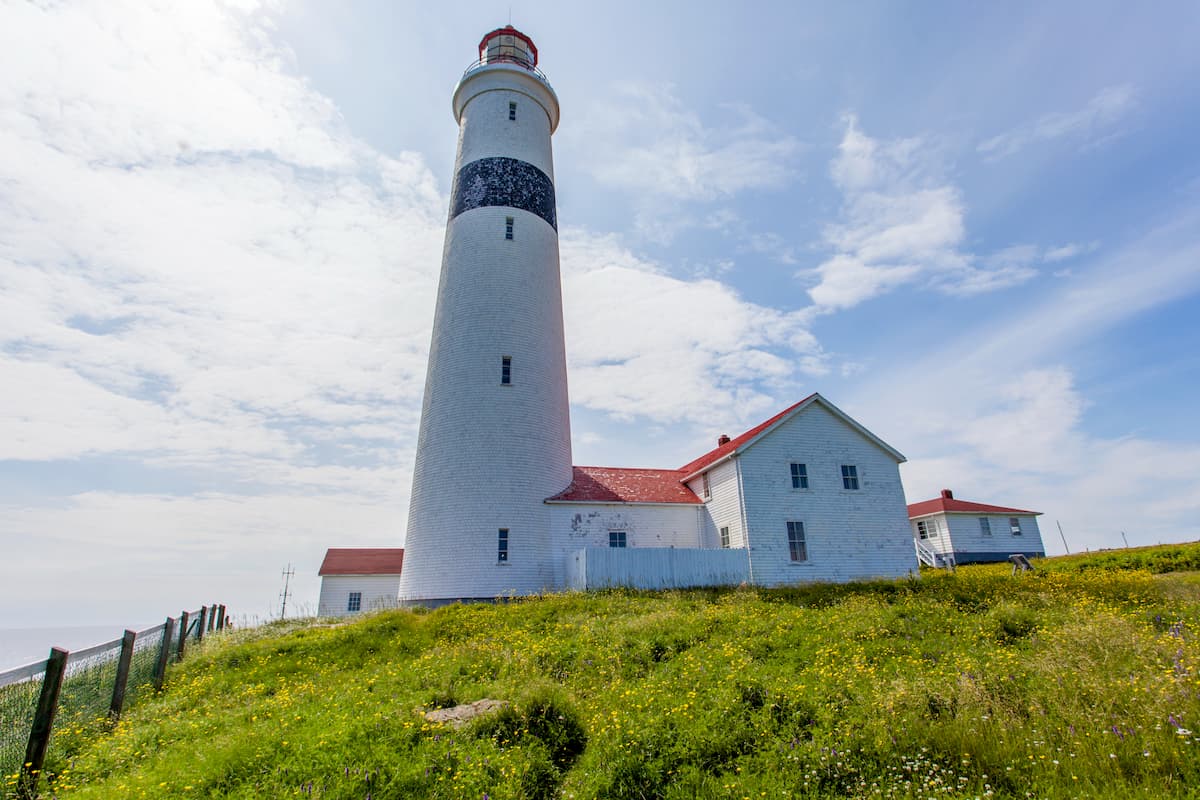 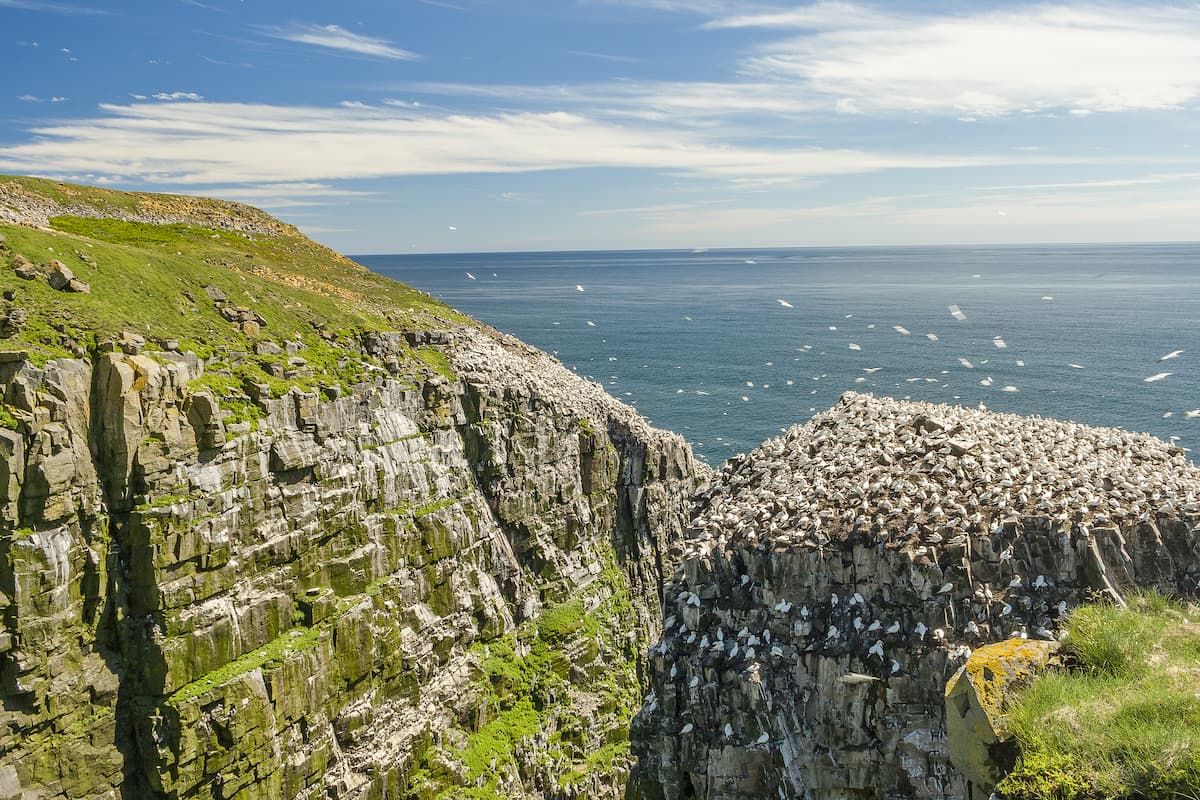 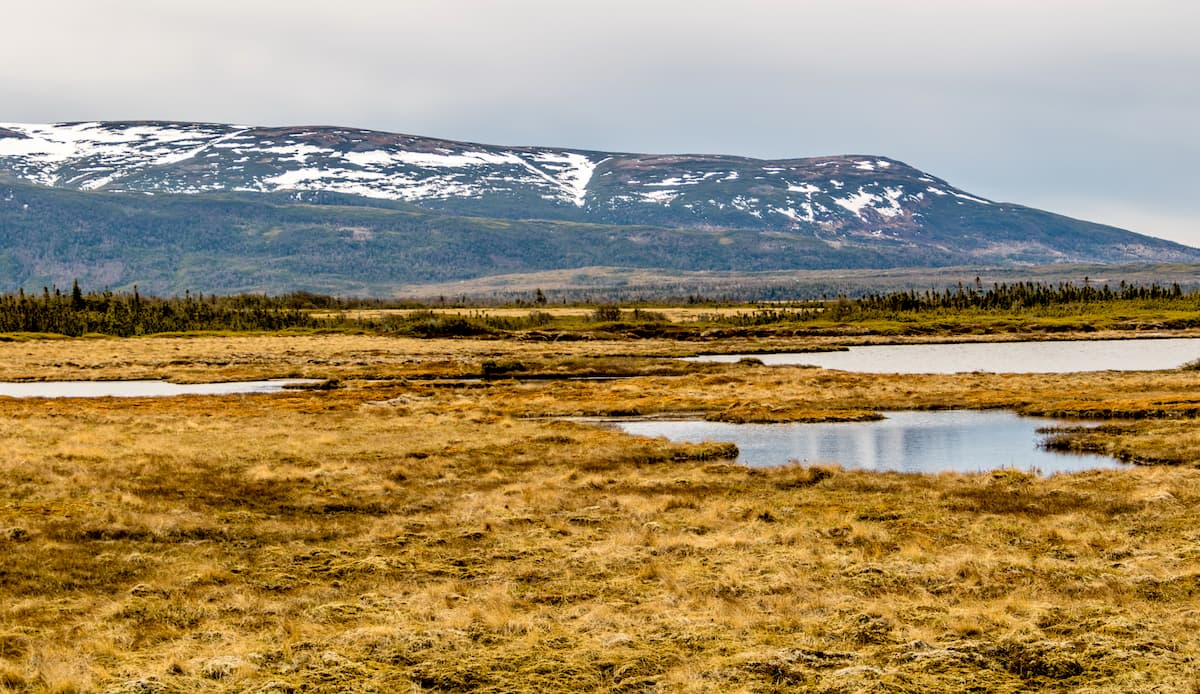